The hike from Murren to Schilthorn is challenging with 1600m of altitude climbed throughout the trail to the Piz Gloria summit where James Bond ‘007’ was filmed. At the summit, you can reward yourself after the long hike with a warm bowl of soup at the revolving restaurant, which lets you take in the 360-degree panoramic views as you enjoy your meal.

Hike Distance: 12.9km Total distance from Murren to Schilthorn mountain summit. If you want to hike down you will need to add a few more kilometers but we caught the Schilthornbahn down to Murren, which was a nice way to return after a long day on the legs.

Hike Duration: 6 hours of elapsed time for us from Murren to Schilthorn. However, our moving time was 3 hours and 45 minutes. We stopped for a lunch break at Rotstockhutte and stopped many, many times to take photos and fly the drone as you can see. We probably needed the breaks anyway as we headed up the hill. If you powered straight through with no breaks you could make this hike in 4-5 hours.

Hike Difficulty: The trail from Murren to Rotstockhutte is relatively easy. Most of the way is a dirt path although there are some sections that are a mixture of rock and path. Most families will easily navigate their way to Rotstockhutte with only 300-400m of elevation.

Rotstockhutte to Schilthorn is very steep. You collect over 1000-meters of an incline in just a few kilometers, which means it is just straight up the mountain. Here you clamber over rocks and are constantly heading uphill. However, it is quite safe and there are no drop-offs. If you can manage the steep incline there isn’t much more to worry about.

Hike Incline: Total elevation was 1718m from Murren to Schilthorn as we recorded. The hike starts in Murren at 1,638 meters of altitude and finishes at the Schilthorn, which has an altitude of 2,970 meters.

YOU WILL ALSO LIKE MY MURREN HIKING GUIDE: 7 AWESOME HIKES NEAR MURREN, SWITZERLAND

HOW TO GET TO SCHILTHORN

There are a couple of options to get to the Schilthorn and I’ll detail them below:

The trail is marked the whole way although the yellow signs don’t initially say ‘Schilthorn’ when you begin in Murren. First, follow the signs to Rotstockhutte and then from there, follow the yellow signs to Schilthorn. It is a very well signed trail as per Swiss standards. There are alternate routes as well. Many people hike through Birg, which means you get to see the alpine lake, Grauseewli, on the way also. I’ve attached my GPX map below, which you can download here for use on your Garmin, smartwatch or another app.

MY EXPERIENCE HIKING FROM MURREN TO SCHILTHORN

Once we arrived in Murren, it was a short walk from the train station to the trailhead. This town is literally hiking heaven and the yellow hiking signs are plastered all over the streets. The first destination you are heading to is Rotstockhutte. Don’t look for a Schilthorn sign as there aren’t really many, just head for Rotstockhutte and then you will follow the Schilthorn signs (unless of course, you are taking the alternate route through Birg).

The trail begins with some solid incline as you slowly wind your way out of Murren Town and into the mountains. We passed several cabins in these early stages that just have incredible views of Eiger, Monch, and Jungfrau. Imagine eating your breakfast each morning with a view like that!

The wildflowers are in full bloom in this part of the trail, which crawls along the edge of the mountains while looming over Lauterbrunnen Valley. Paragliders constantly fly down the runway, taking off to eventually land down in Lauterbrunnen.

After about half an hour on the trail, our steady incline turned into an ascent. We were now winding up the trail instead of along it. However, that meant the views became increasingly magnificent as more of the valley revealed itself and the peaks became more apparent in the distance.

Once over the hump, it was a 30-minute power session through to Rotstockhutte without too much incline. This section of the trail was a good recovery for the legs and allowed us to take in the truly amazing views. A couple of girls had decided to do just that and set up their picnic lunch looking out towards the mountains.

We kept marching on and arrived at Rostockhutte after a couple of hours. With a big menu and lots of refreshing drinks, the Rotstockhutte is a great place to stop for a rest at what seems to be the midway point of the trail They also have some impeccable bathrooms considering their mountain position. I was impressed!

Lots of hikers will call it a day at Rostockhutte and by the number of beers being consumed at the outdoor tables, it seemed to be the majority vote. However, we were continuing on up into the valley and then directly up the steep hill. It almost seemed too steep and the trail is hardly visible but we continued to follow the yellow signs that said Schilthorn as they are rarely wrong in Switzerland. There are apparently two routes one to the left of the valley that goes up and around but we went directly up along the rocky river bed. I can’t speak for the other route but the direct trail is beautiful with views back down the valley only getting better as you climb higher and higher.

This part of the trail was very strenuous. You are basically just climbing straight up and we took many ‘photo’ breaks that were more just me catching my breath than anything else. Although, this landscape did deserve to be photographed. There was no bad angle.

After more than four hours, we had made it to the sign at what seemed to be the top of the hill. It was now just the ridge towards the Schilthorn summit remaining. However, to our surprise, the sign still said an hour to go! Again, it was right.

This part of the trail has a drop-off on both sides but there is no real danger as the trail is very wide and in places of risk there are guard rails or huge rocks protecting you from falling down the slope. Nowhere along this hike should you feel the need to practice technical hiking skills. It was more a matter of stamina than technique.

Clambering over rocks and scaling up the man-made ladders we scurried along the ridge until finally making it to ‘007’ headquarters and the famous Piz Gloria – Schilthorn Summit. The film ‘On her Majesty’s Service’ was filmed at the building and filming took place for 6 months of the 9 months the movie took to film. There are memorabilia and information throughout the summit to immerse you in the James Bond atmosphere. Even the burgers have ‘007’ printed onto the buns.

From the summit, the views are spectacular in all directions, which is why the Schilthorn restaurant has a revolving dining area so over the course of an hour during your meal you get to see all angles of the panorama.

There was quite a crowd at the top because a cable car takes people up and down and that usually means the regular, non-hiking tourists of which there are many, flock to the summit for the views.

We ended up taking the cable car down to save our legs after what was already a pretty solid hike with 1,718m of incline. You can get an idea of the crowds at the summit from the photos below. I highly recommend this hike through the Rotstockhutte route as it was amazing and blew us away from the first minute until the summit. 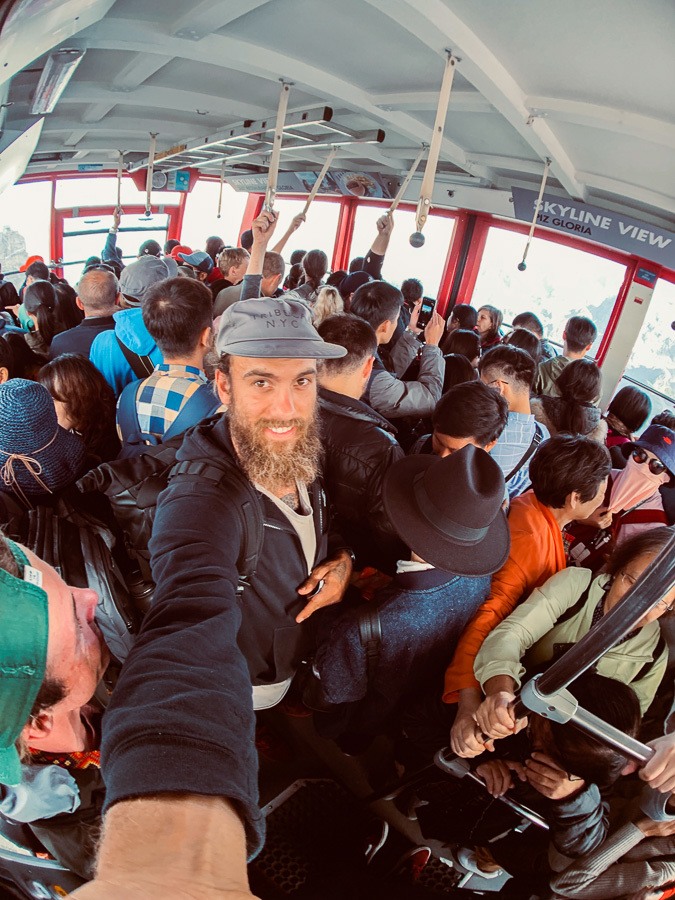 Hi - great article! I skied here many years ago and am coming back this summer. I want to hike it but will be solo - do you think it is safe to hike alone? Thanks!

This looks incredible. I'm hoping to be in Switzerland this summer, based out of Zurich while I'm there and would love to summit one of the Alps on a budget. I'm a solo traveler. Do you recall what cell service was like on this hike? Asking for safety reasons, in case something were to happen to me. Thanks!

Clim to schilthorn walking, the cable car from Schilthorn to stechberg is free ?

Hey, the GPS map link you posted is not working. But i found it somewhere else and followed it. It was really cool.

Thanks so much for posting this! I followed it closely and was able to finish the whole hike. (I took the cable car down.) It was difficult in places, but I did it. ;)