The Eiger Trail hike is one of the most popular routes in Switzerland because the path leads hikers directly under the world-famous Eiger North Face Wall, which is renowned as one of the toughest climbs in the world.

Hike Distance: The distance from Eigergletscher Train Station to Alpiglen along the Eiger Trail is 6.5km.

Hike Duration: 2.5 hours although if you went straight through without taking photos or stopping it would be well under two hours. It could be run under an hour.

Hike Difficulty: The path is gravel and involves no technical aspects. This is a family-friendly, dog-friendly trail. 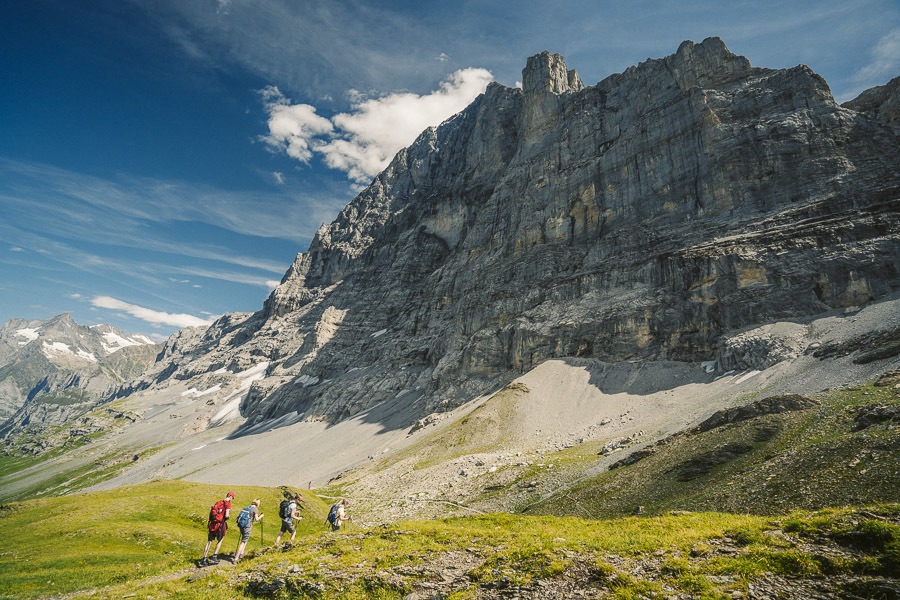 HOW TO GET TO THE EIGER TRAIL

We used our Swiss Half-Fare Card so we only had to pay half of the ticket price. You can check the train timetable here for the current schedule to Eigergletscher. 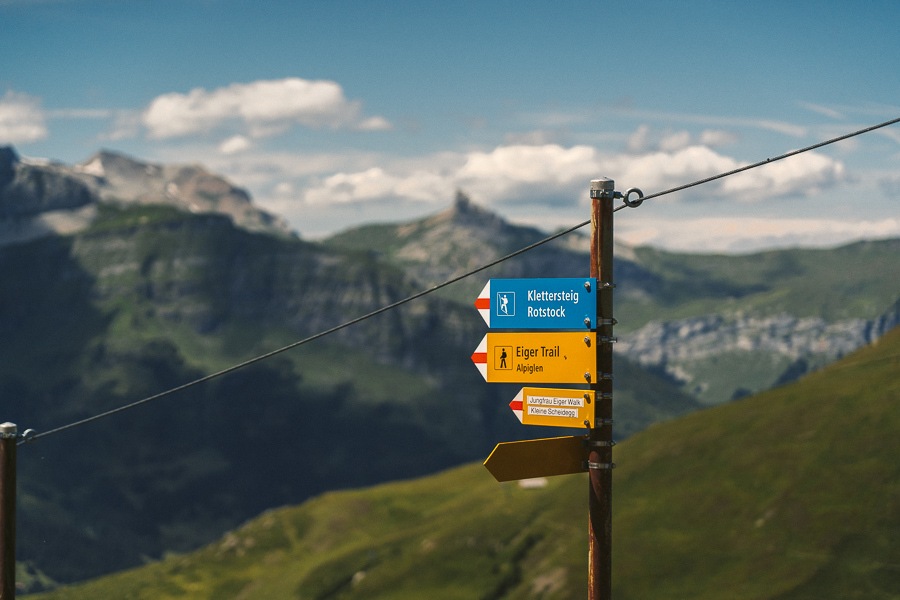 I’ll be honest… getting to the Eigergletscher station in the summer peak season was a bit of a mess by Swiss standards. There were hoards of tourists barging through everywhere, people yelling to get out of the way and then everyone was lined up in chutes like cattle just to get on the train. It was mildly orderly as you would expect in Switzerland but very full on and we didn’t feel like we were on a mountain adventure.

Luckily, those packs of wild tourists were heading up to Jungfraujoch viewpoint. All of the hikers got out at Eigergletscher (which was less than 1% of the passengers on the train). From that point on it was back to the normal peace and quiet in the Swiss Alps. From Eigergletscher, we crossed the tracks and got started on the famous Eiger Trail.

The trail is quite short compared to many of the long mountain hikes in Switzerland. With just 6.5kms before us and our eventual finishing point in Alpiglen, I was in no rush to cruise through the trail. We slowly meandered along and still finished within 2.5 hours including a drone flight, sun baking session and long stops throughout the trail for photos.

The trail starts off with 200m of incline, although it is spread over a couple of kilometers and is nothing too strenuous. At this point, you cannot see Eiger, but the views across the valley and the towering glacial mountains are incredible and there is something to gawk at in every direction. 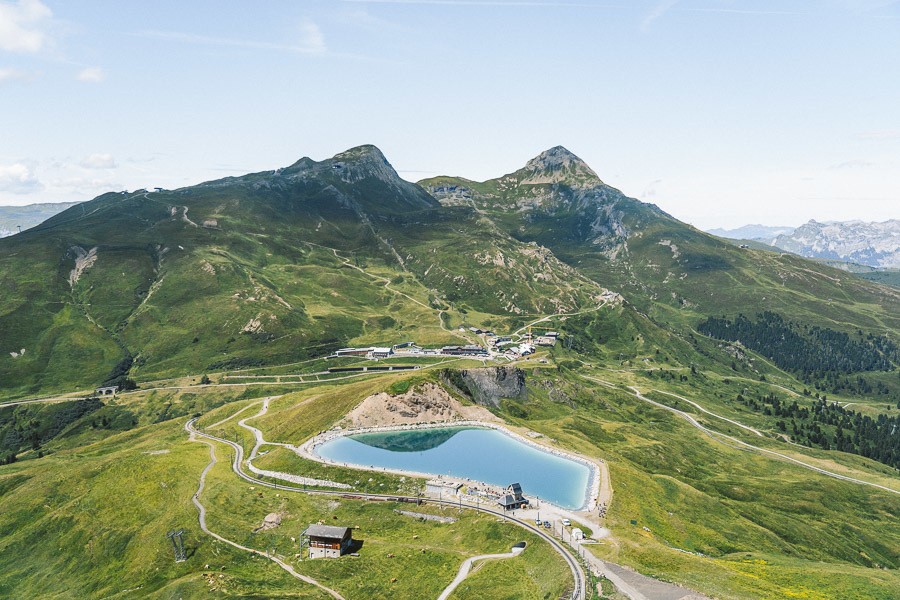 The trail at this point is a gravel path with a lush green valley on one side and a huge wall of mountain on the other. It’s quite a unique trail in this regard, where the aim is more to observe the mountain rather than to climb it.

It isn’t long before you will reach the Eiger viewing area. It’s about 2km into the trail and there will likely be a little gathering of people and possibly some local cows. Here you will look up towards Eiger Mountain and if you read the signs, you can even identify the path the climbers use to scale the North Face wall of Eiger.

The interesting part about this viewpoint is only a portion of the mountain is visible. This is because you are so close to the wall you can only see partway up despite it seeming like the entire mountain. I found this out as I fly the drone backward away from the wall and the rest of Eiger became visible. 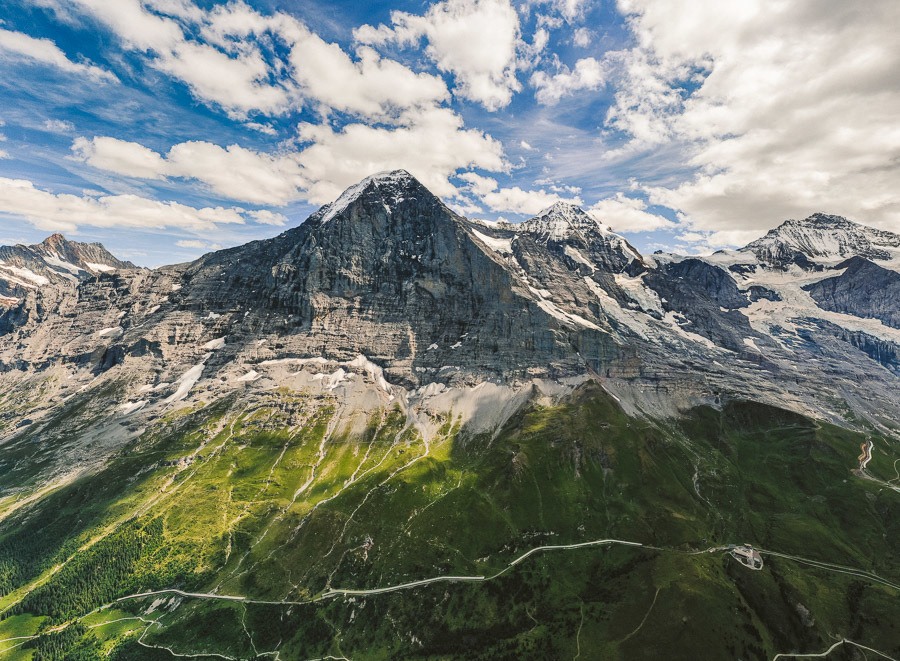 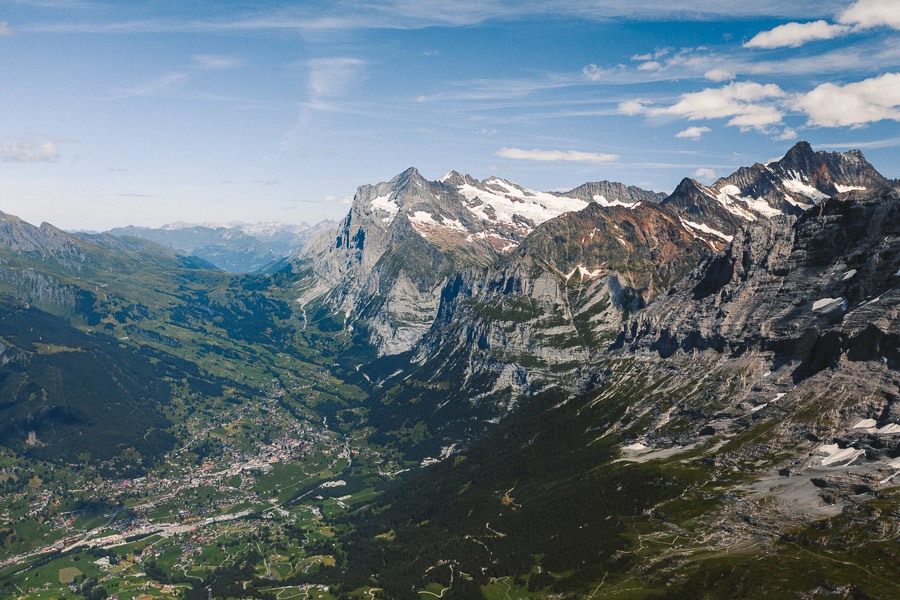 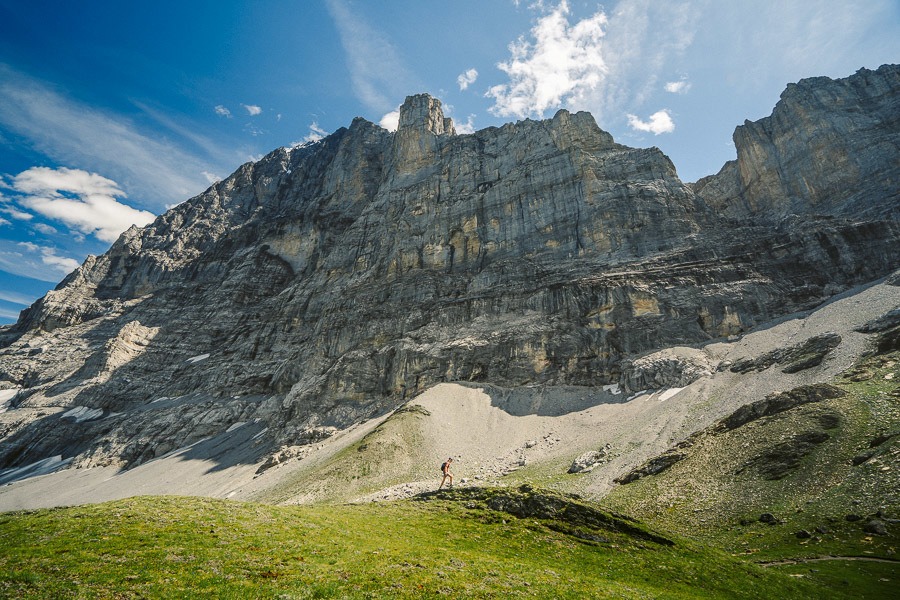 After the viewing point of Eiger, the trail is pretty much all downhill. You will drop about 600m now over the next 4kms as you continue to take in the epic mountains on your right and the small villages in the valley on your left. 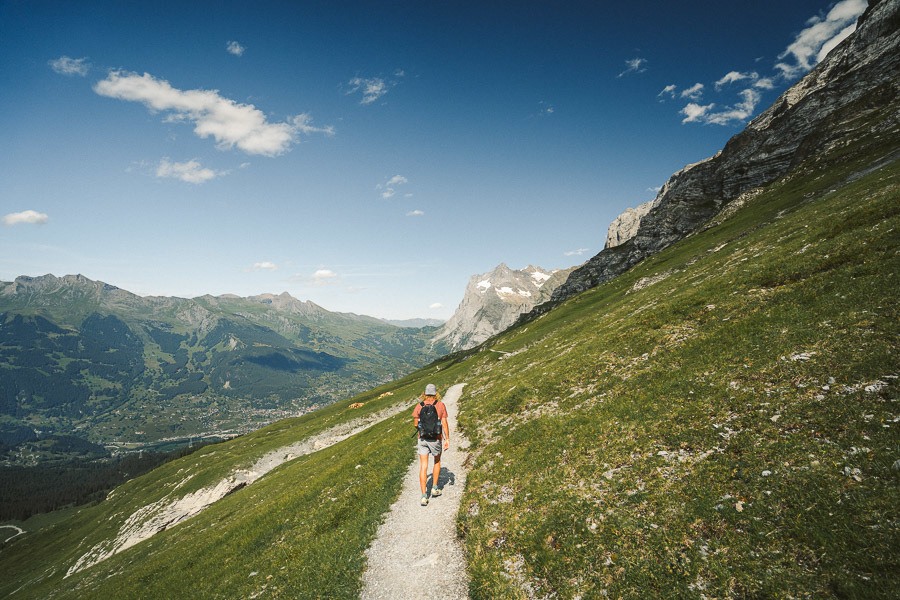 Shortly after the Eiger viewing point is a wonderful bench viewpoint. The Swiss really know how to place a good bench or maybe it’s just there aren’t many bad spots to put a bench in Switzerland. Either way, this is a great spot to relax in solitude and take in the whole region for a few minutes before getting stuck into the second half of the hike.

The rest of the trail continues on the gravel track for a couple of kilometers until you reach a point where you will turn left. Shortly after you turn left there was a waterfall plummeting into a pool, which turned into a wild river running through a slot canyon. I’m sure this will look mightily different depending on the time of year you visit but for us it was spectacular!

The trail now winds through a series of steep switchbacks dropping several hundred meters of the course of a kilometer before turning you towards Alpiglen Station. You will need to walk through a strategically placed restaurant to reach the station! If you prefer to walk all the way back down to the station, the sign stated it would take 90 minutes to reach Grindelwald from Alpiglen Station. We took the train, which cost us $6 to reach Grund where we completed our loop!

The map below shows the trails, trains and cable cars in the Jungrafu region. You can see Eigergletscher, Alpiglen and the Kleine Scheidegg Station. 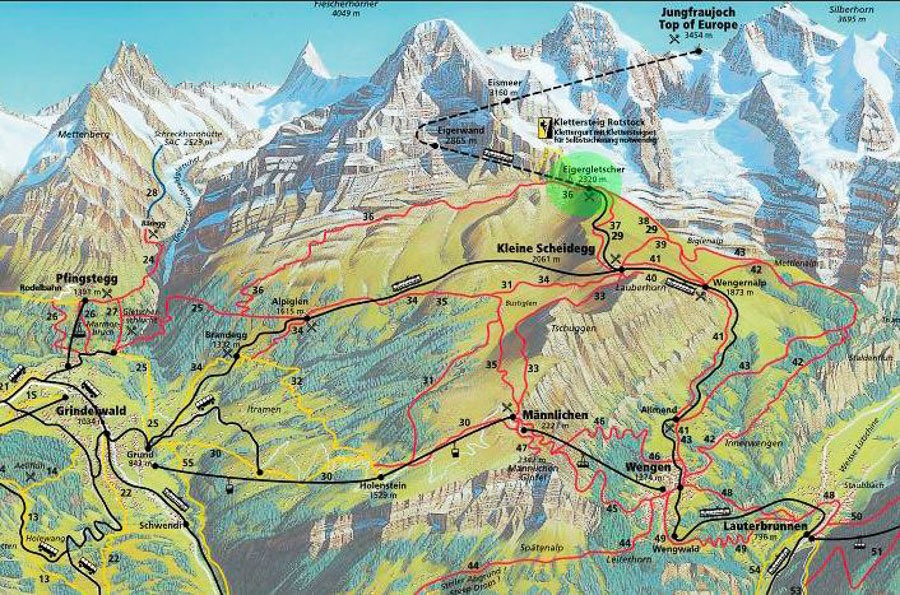 Each year athletes from all over the world come to Eiger to compete in the Eiger Ultra Marathon. The event began in 2013 and takes runners through some of the most breath-taking viewpoints in the region. Runners pass-through popular spots such as Faulhorn, Kleine Scheidegg and First before the trail runs beneath the Eiger itself. The race is 101km in length and there is 6700mm height difference throughout the race. That’s all sounding a little tougher than the 6.5km downward trek of the regular Eiger Trail Hike.

The Eiger first began attracting mountaineers from all over Europe to attempt the North Face, which at the time was known as the ‘last problem of the Alps’. In 1938, Anderl Heckmair, Fritz Kasparek, Ludwig Vörg and Heinrich Harrer finally conquered the climb after spending years tackling the ascent route.

Since then it has been climbed by many, but only experienced climbers. The summit is 3,970 meters. The ascent is only suitable for people with previous rock climbing and mountaineering experience. You will need crampons and an ice axe. Climbers need to be capable of seconding steep rock pitches in mountain boots while wearing a rucksack. The summit day is very long and can take 10-12 hours, which means you need great fitness and concentration.

If you are an experienced climber and interested in climbing ‘The Eiger’, there are a number of tours available ranging from $2,000 to $4,000 USD depending on the length of preparations necessary.