Via Ferrata is one of the most epic experiences you can have in Switzerland. It’s basically a set of ladders and metal grips that lead you up the side of a mountain, often very exposed. You are attached the whole way with a harness but trust me it is still scary to hang off the edge of a cliff. In this article, I’ll share with you the Via Ferrata routes in Switzerland, which I found the most epic during my trip around the country. 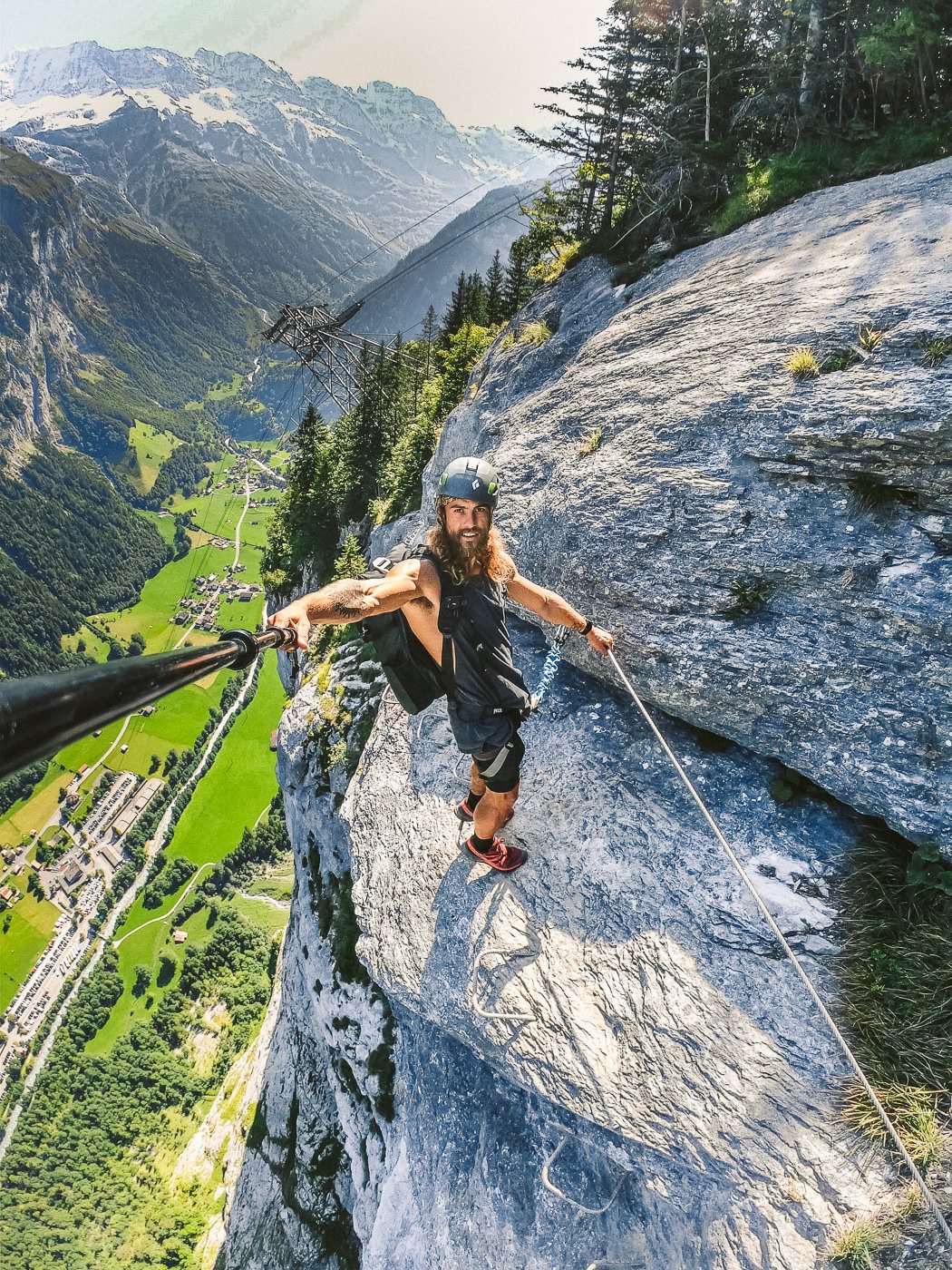 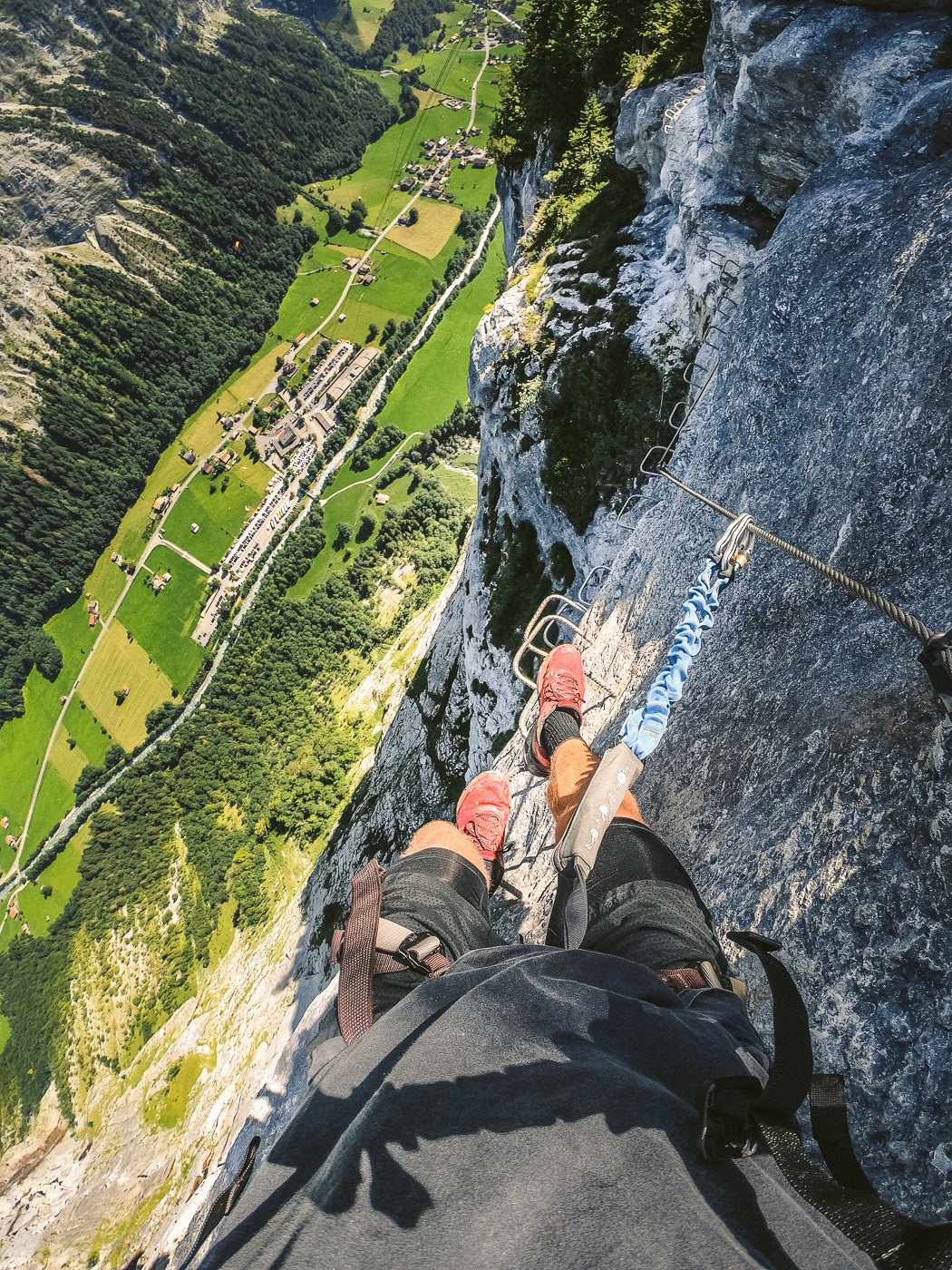 WHAT IS A VIA FERRATA

For those who don’t know what a Via Ferrata is, it’s basically a series of ladders, steps, and rock climbing that leads you up a wall. You are wearing a harness and clip into a strong wire at the start of the Via Ferrata. From that point, you are always clipped in with at least one clip. Ever 10 steps or so, you reach a new section of wire and you unclip one Caribiner clip from the old section and attach it to the news section. Once it is firmly secured, you unclip the second clip from the old section and also add it to the new section so you now have two Carabiner clips in the new section and you move another ten steps. I created a little vlog-style video and posted it below so you can understand what that explanation actually looks like visually.

You can actually buy your own Via Ferrata gear for pretty cheap on sites like Amazon and then you don’t need to rent it at each Via Ferrata course. They usually cost about $20-40 USD to rent per day and can be bought for about $200 for a full kit such as this Petzl Via Ferrata Kit.

4 AWESOME VIA FERRATA ROUTES IN SWITZERLAND

The Via Ferrata (Klettersteig) in Flims is an epic series of staircases and ladders on the edge of a cliff that winds up hundreds of meters above the valley. From the summit, you have incredible views of Crestasee, Caumasee and the entire region of Flims

The Pinut Via Ferrata is actually the oldest of it’s kind in all of Switzerland and was opened in 1907. For those who are nervous hearing about climbing a century-old ladder, fear not. This Via Ferrata is maintained by the tourism board and was fully renovated in 2007.

The first part of the Pinut Via Ferrata is, in my opinion, the most spectacular. There is a huge spire that you pass by on the boardwalks in between scaling the ladders up the cliffside. It is a really unique rock formation and by walking upon the cliffside you get a close-up inspection. The route then continues up the wall and actually leads you inside some caves and small tunnels, all the while connected to the strong cable, which keeps you safe throughout the hike. From within the tunnels and caves, you can see out the gaps all the way down to Flims and the lakes. 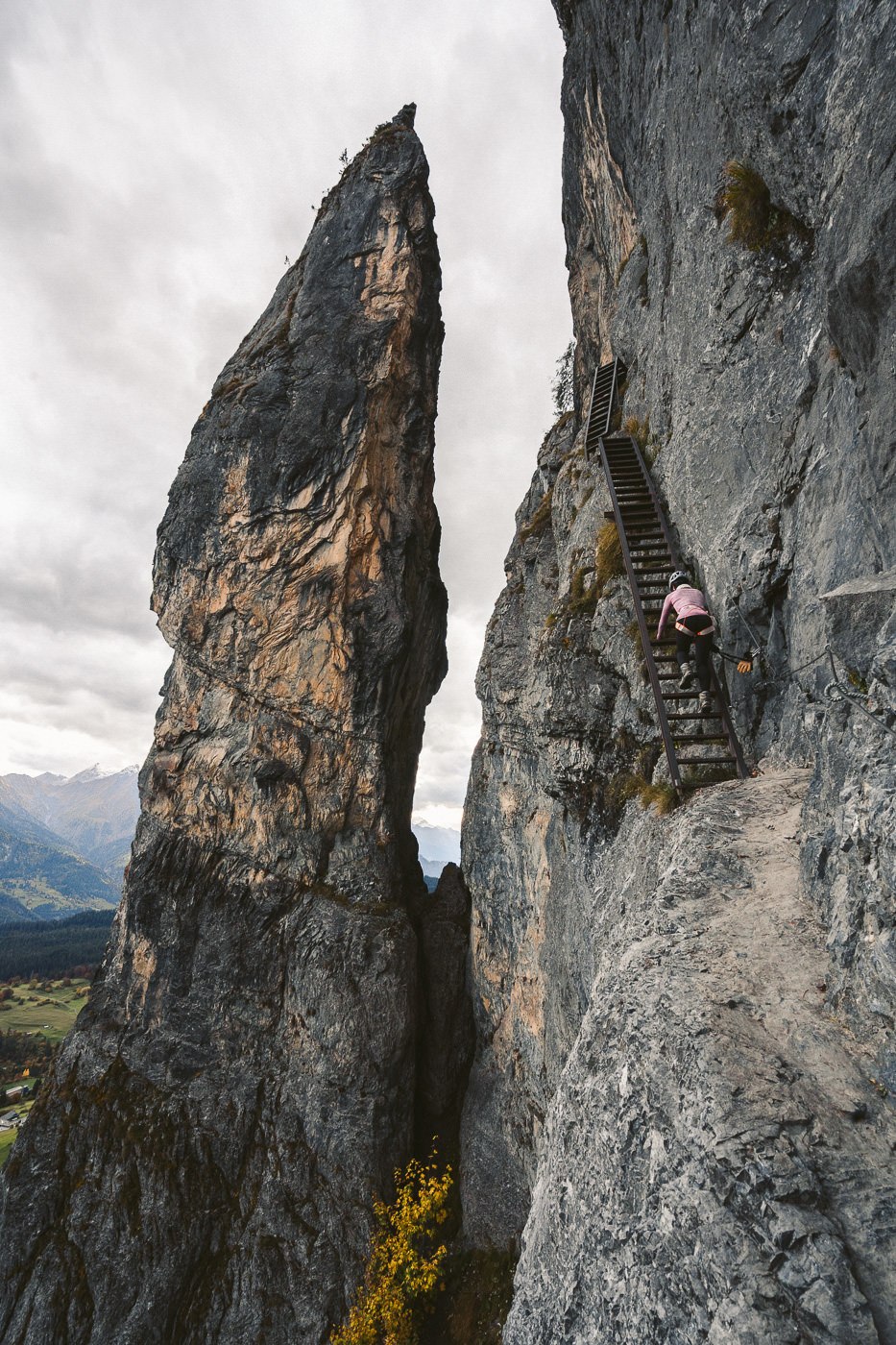 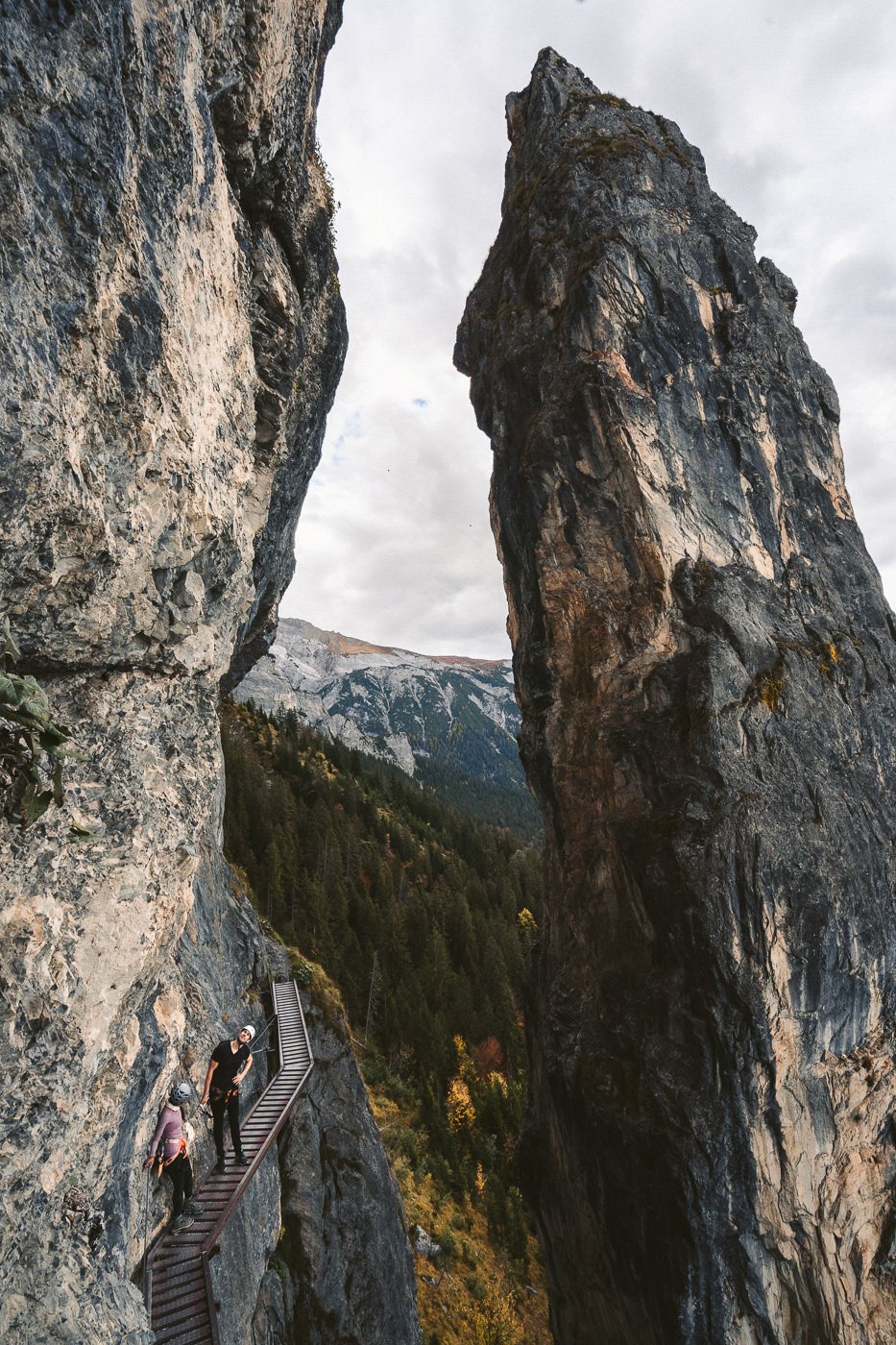 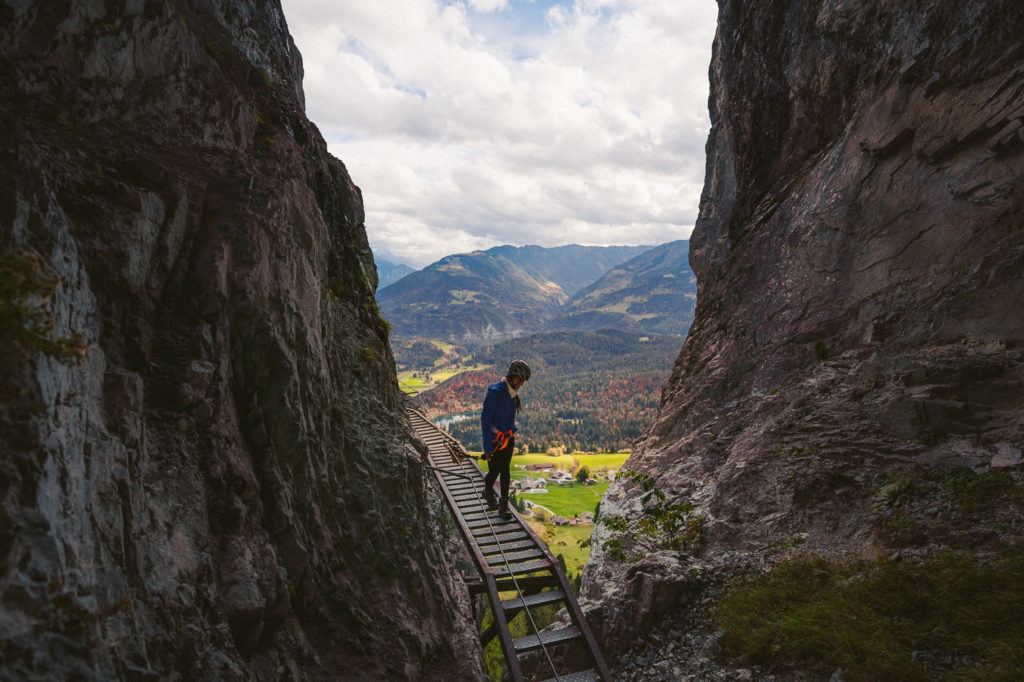 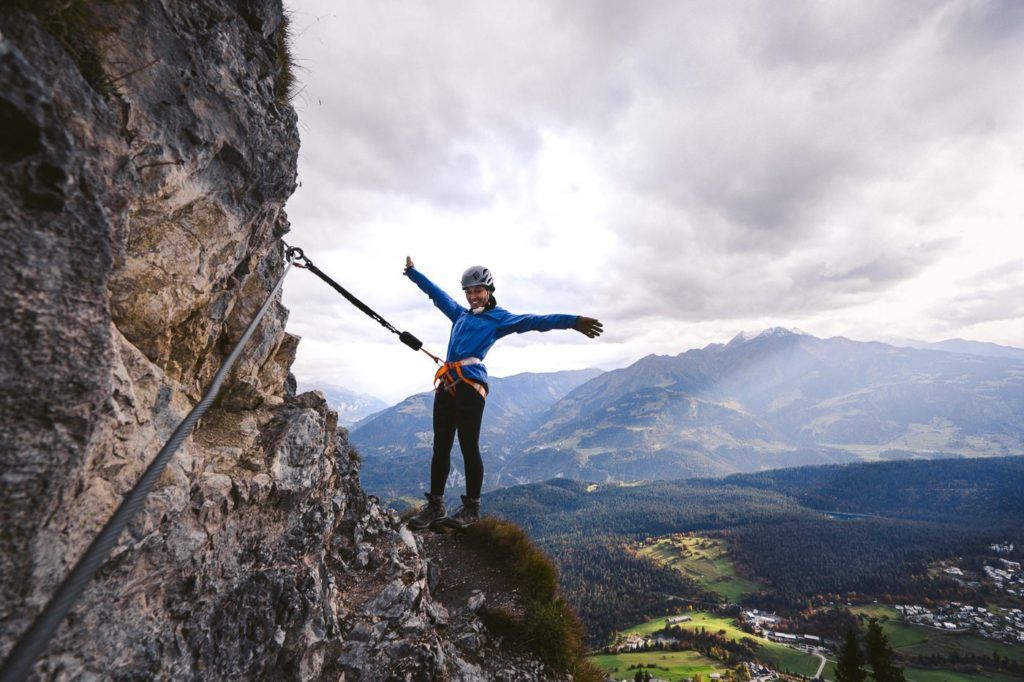 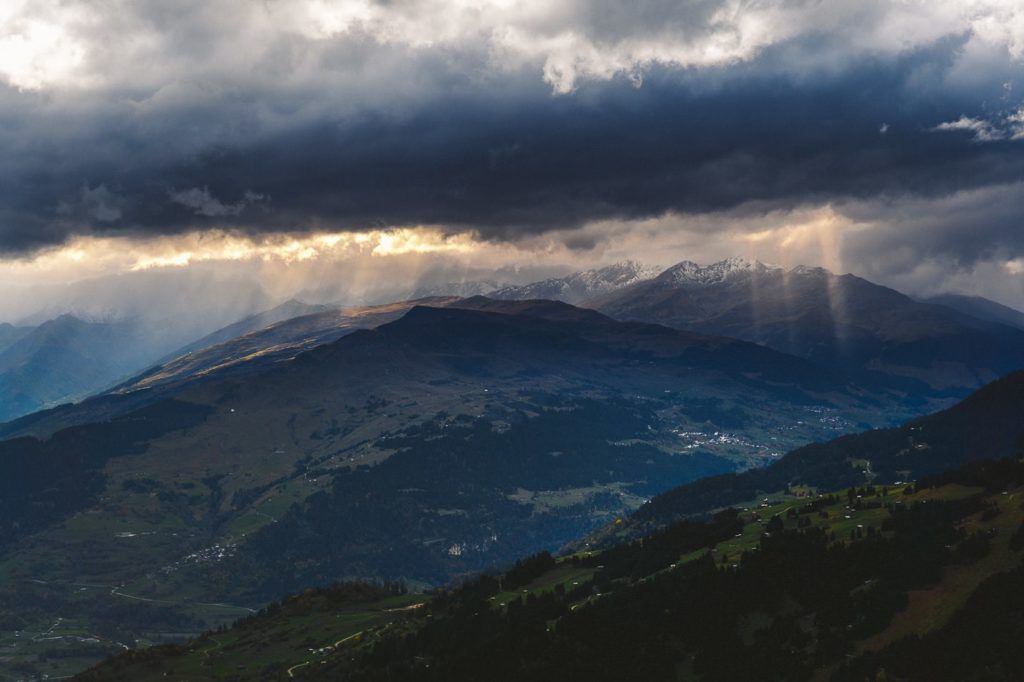 MURREN TO GIMMELWALD VIA FERRATA

The Via Ferrata from Murren to Gimmelwald is one of the most epic adventures in Switzerland. Traverse ladders and steps on the edge of a cliff overlooking Lauterbrunnen, but don’t worry you are strapped in with a harness!

For those who don’t know what a Via Ferrata is, it’s basically a series of ladders, steps, and rock climbing that leads you up a wall. You are wearing a harness and clip into a strong wire at the start of the Via Ferrata. From that point, you are always clipped in with at least one clip.

This is one of the most exhilarating hiking experiences you can have while based in Interlaken. You will literally be hanging off the wall over a 500-meter drop down into Lauterbrunnen Valley. You up for it?

I’ve added the instructions to get to the start of the Murren Via Ferrata below. 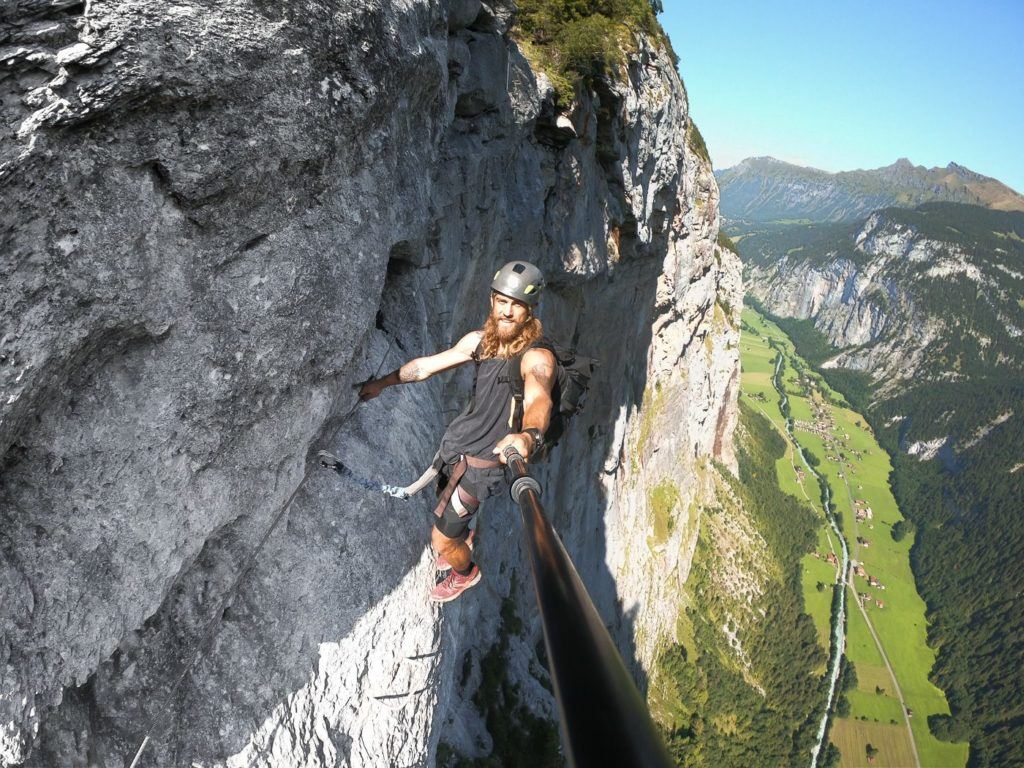 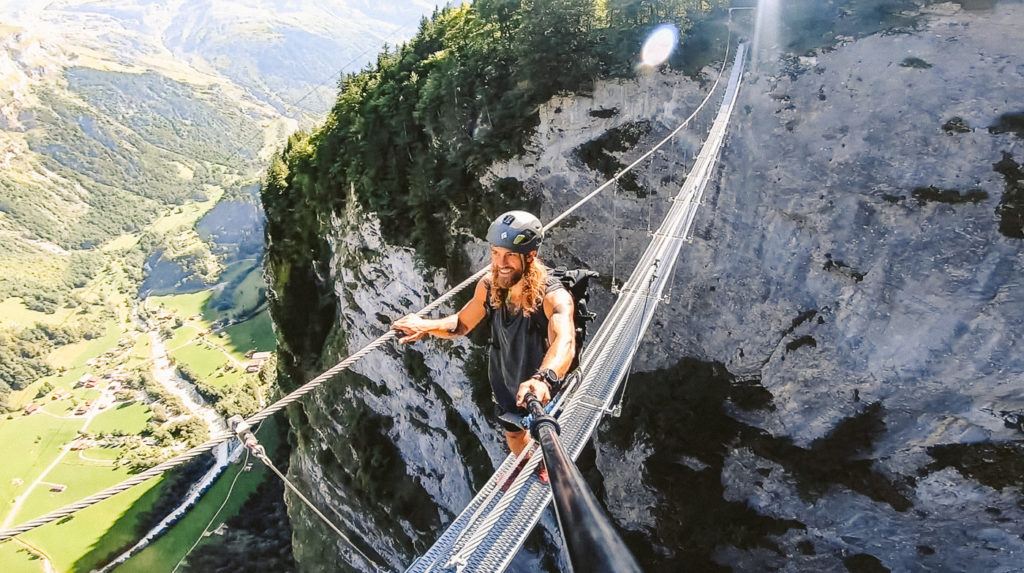 EPIC VIA FERRATA AT FÜRENALP IN ENGELBERG, SWITZERLAND

Hiking in Switzerland is an incredible experience with some of the most amazing mountain views and summits in the world. However, you can take it to the next level and actually get off the hiking trail and climb directly up the mountain face on a ladder. It’s called Via Ferrata and you are clipped into a wire so it’s totally safe but also an adrenaline rush as you scale hundreds of meters up the rock face. The Via Ferrata in Fürenalp, Engelberg is known as one of the best routes in the country. It’s challenging but such an adventure!

Hike Distance: The total hike distance was 6.54 kilometers, which includes the 1km walk from the shop/ticket office to the start of the Via Ferrata. Not sure how accurate that was considering the ups and downs but that is how my Garmin watch recorded the day.

Hike Duration: Our total time from the shop to the wall to the summit was 4 hours and 12 minutes. Our total moving time was 2 hours and 17 minutes. We let a lot of other climbers pass us and went very slowly as always to take photos and just sit around and enjoy the views. It’s not the kind of activity to rush. It could be easily done from top to bottom in under two hours. You do need to catch the cable car down at the top or hike down, which adds a little extra time also.

Hike Difficulty: This route is rated K4 difficulty. I haven’t done too many Via Ferrata’s but I was told this is one of the more challenging ones out there. It was actually my first time ever and was a pretty simple concept of clicking in and out so don’t worry if you have little to no experience. We climbed 773 meters of an incline in total and a lot of it was ladders and metal pegs out of the wall. If you have any fears of heights don’t do this. If you aren’t in good shape… don’t do this. If you like adventure and want a challenge then go for it. There were several families doing it and a young boy so it’s nothing crazy but definitely not for everyone.

Hike Incline: The total incline for the day was 773m from the shop to Fürenalp. The hike starts in at the ticket-shop/Fürenalp cable car office and finished at an altitude of 1811m. 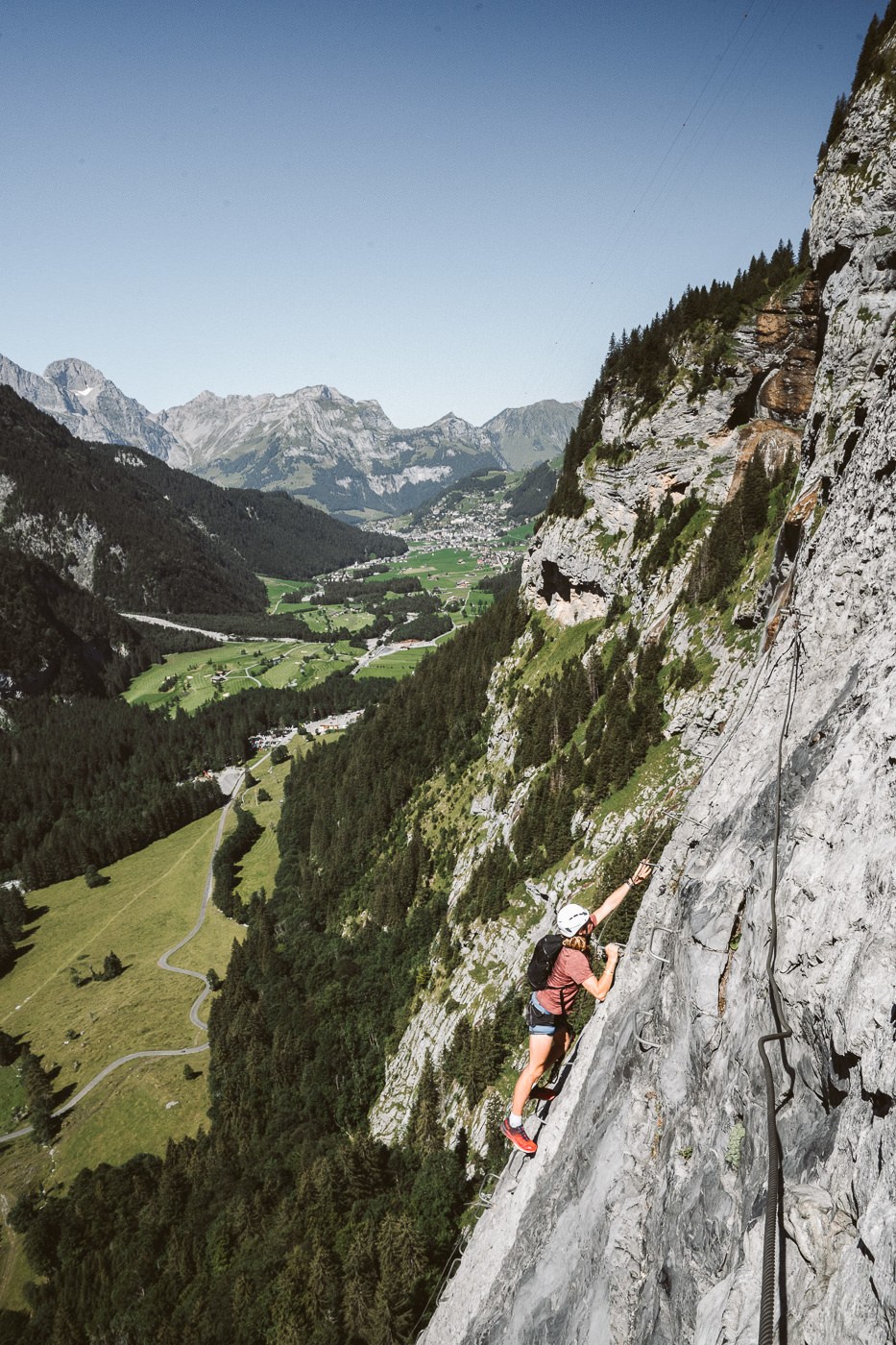 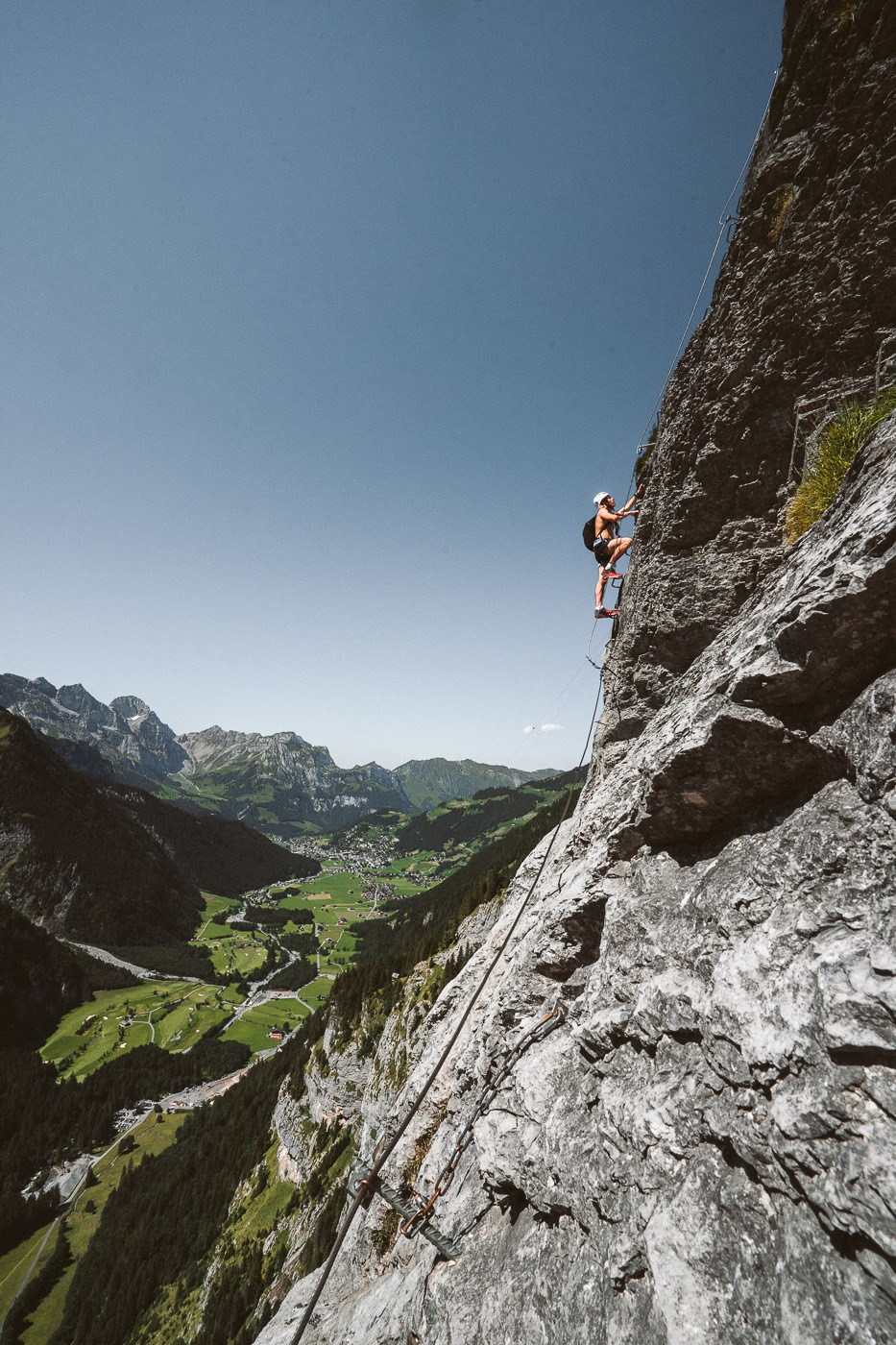 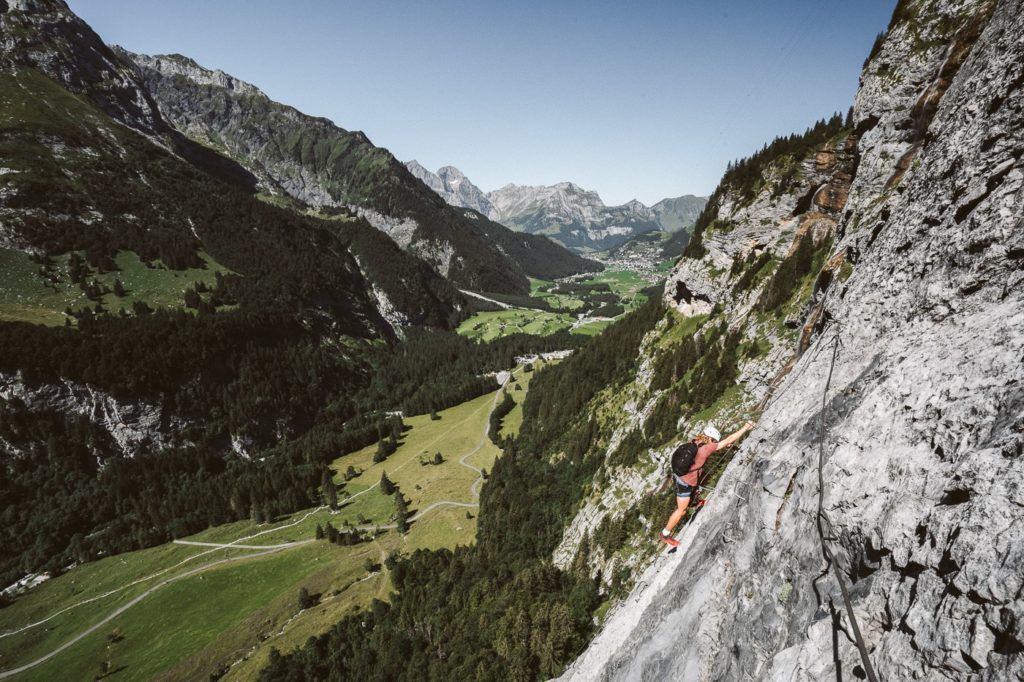 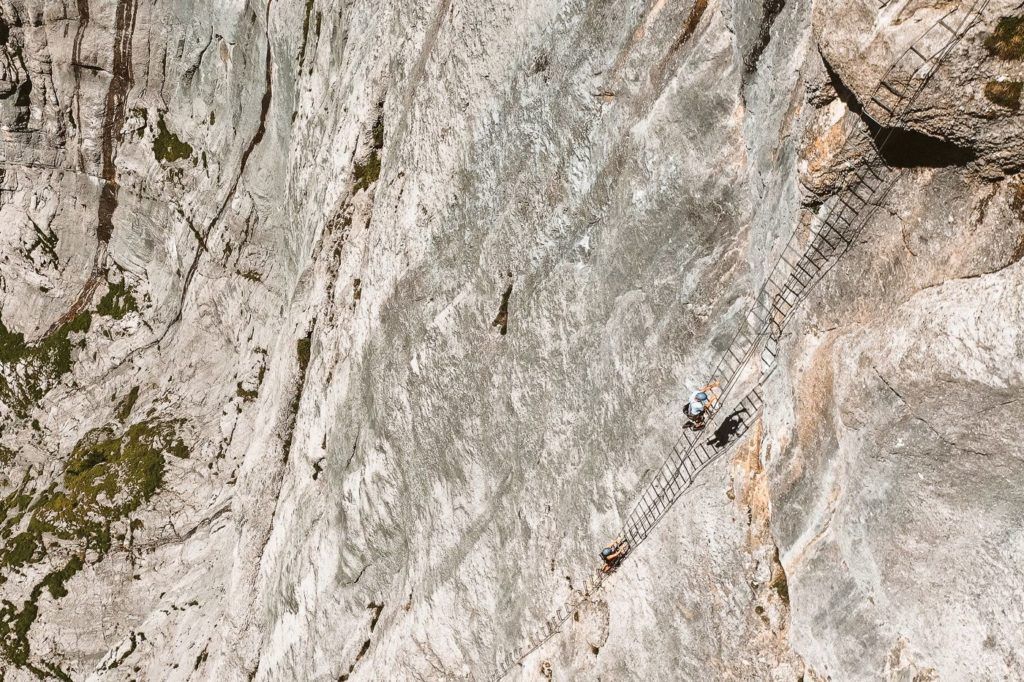 THE ROTSTOCK VIA FERRATA AT EIGER, GRINDELWALD

The Rotstock Via Ferrata is an epic climb right next to the famous North Face Wall of Eiger. Using a harness, stairs and metal stairs you can climb 400m of incline to the 360-degree panoramic viewpoint.

For those who don’t know what a Via Ferrata is, it’s basically a series of ladders, steps, and rock climbing that leads you up a wall. You are wearing a harness and clip into a strong wire at the start of the Via Ferrata. From that point, you are always clipped in with at least one clip.

The total hike distance was 5km from the start of the Eiger Trail and up to the summit and then back down to Eigergletscher Station. 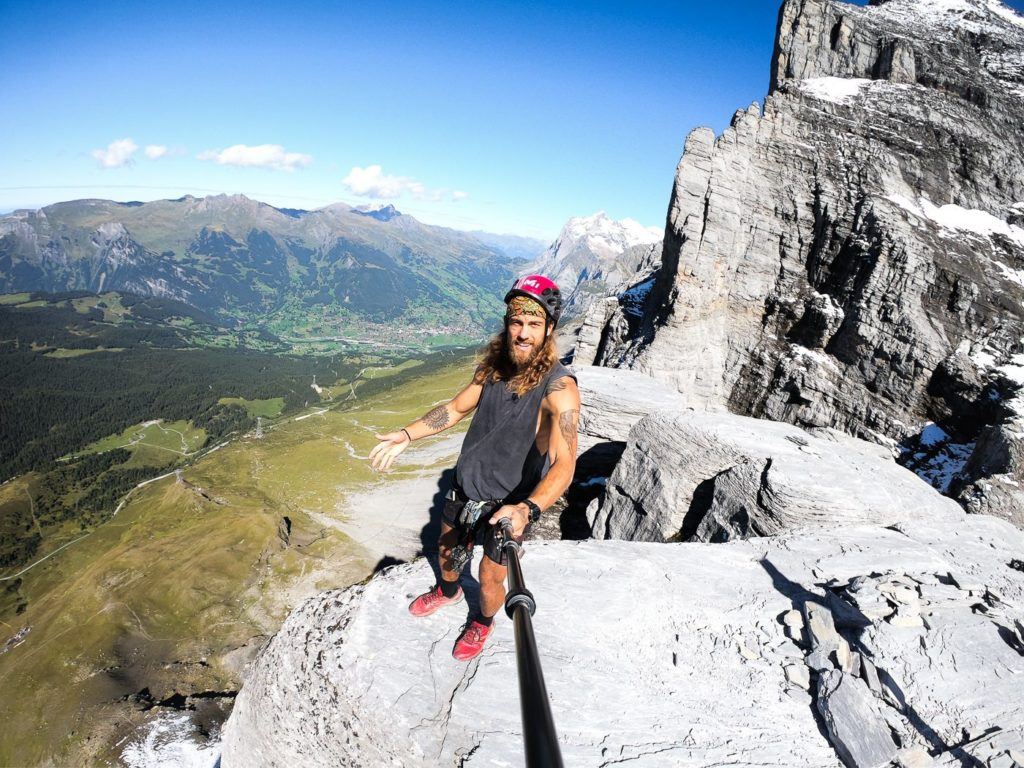 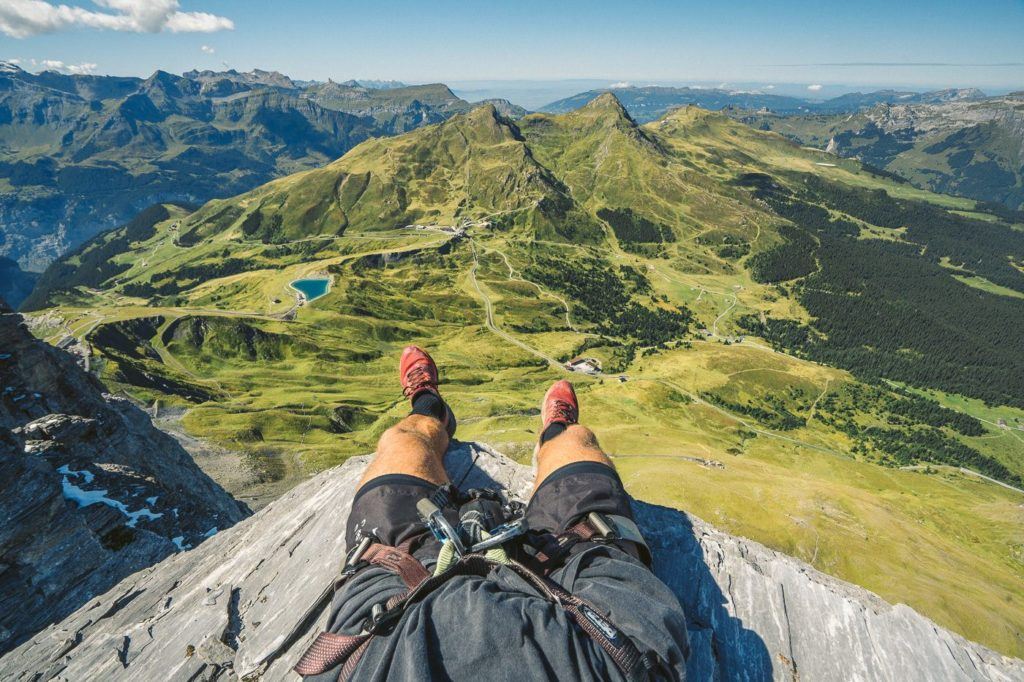 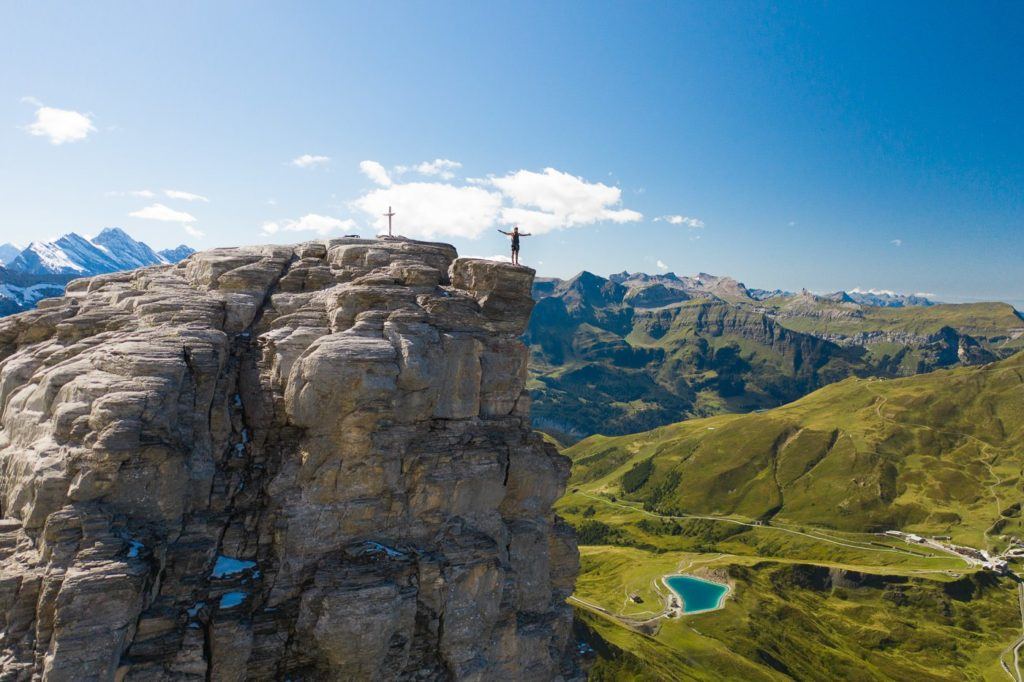 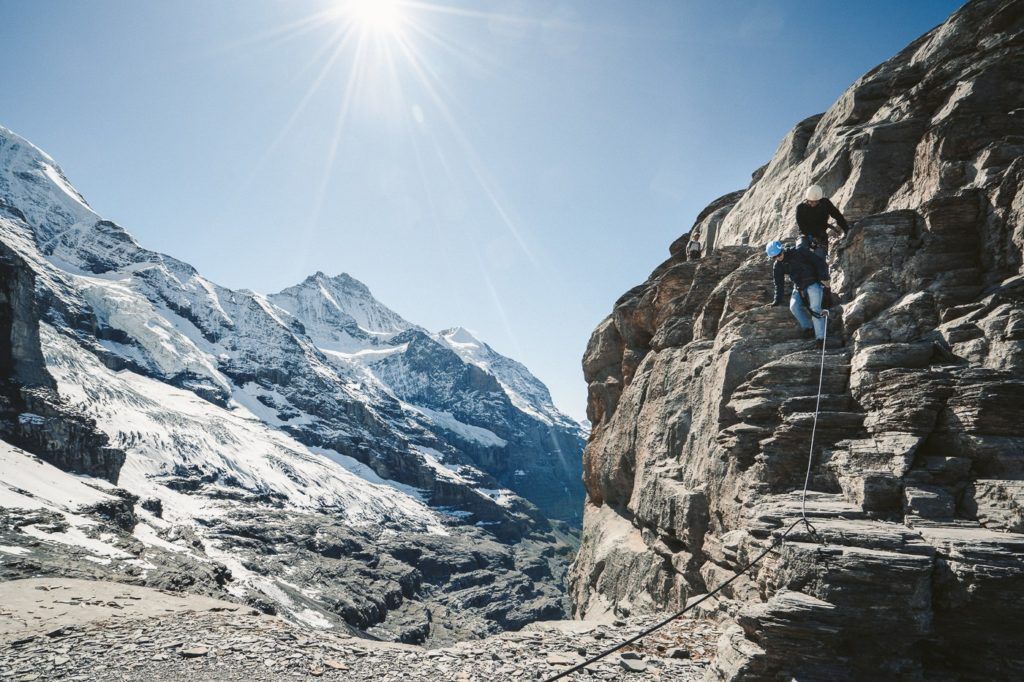 I am traveling to Switzerland the last week of May (Interlaken and Lucerne), are Via Ferratas open during May as well for solo travelers (no guide groups)?

IDE like to know if one could accomplish these 4 via ferratas in 6-7 days? Are there accommodations at each area where the courses are located? Thank you in advance

Hi, thanks for sharing nice content! Are the via ferratas closed in april? I mean, is the access forbidden? Or its just not very advisable? Thanks! Willy

Thank you for all the detailed tips. Makes all the difference when planning the outings cause there's indeeed many details to have into account and you covered most of them! These four Ferratas are on my list! Keep up Jackson

Okay, we simply HAVE to learn this over the summer! Cannot believe how many awesome spots you have both here in Switzerland and so many other places! Hope we can go on just one of these adventures before the year is over!

It's so easy and fun. Lots of families and kids doing it aswell!