The Morgenberghorn Hike is a challenging trail with 1300m of incline but the panorama point has the best view in the region view on Lake Thun!

Hike Distance: The total hike distance was 19km kilometers, which includes the summit of Morgenberghorn and then continuing on all the way to Wilderswil. That is the route I took but you can make it shorter in distance by returning to Aescherid or other nearby descents. You then add on 1.5 hours of transit back to Interlaken if you are staying there so timewise it is similar.

Hike Duration: The hike took me a total time of 6 hours and 51 minutes in total but only just 4 hours and 22 minutes of moving time. The rest of the time I was taking photos or hanging out at the summit. I actually made it to the summit from Aescherid Schulhaus in 1hr 51 minutes. If you are up for a challenge try and beat that and remember I had my camera backpack with a drone, camera, lenses, jackets, food, and water!

Hike Difficulty: This route is a little tricky and there are a number of parts where you need to use your hands to climb. Chains are installed in most sections of the trail where you need to use your hands. I never felt unsafe or exposed. All of the climbing on chains was on an incline with walls on either side. Other than the chain sections the hike is steep but not too dangerous. There are a few areas along the ridge and often the trail is marked as ‘alpine’ by the blue and white flags instead of red and white. I’d only go for this hike if you are up for a bit of a challenge. In addition to the chains and rocky path, it is also 1300m of incline over 7km so you are doing some considerable incline to reach the summit.

Hike Incline: Total incline for the day was about 1,309m, which was mostly done on the climb up to Morgenberghorn. After that, it was all downhill all the way back to Wilderswil which was a 1,662m decline. Solid day on the legs.

Below you can see the route I took when I did the hike. I caught the train from Interlaken to Spiez then the bus to Aescherid Schulhaus. Here I began the hike to Morgenberghorn. I then descended down the ridge into the valley and hiked down towards Saxeten and on to Wilderswil where I caught the train back to Interlaken. You could cut the hike down by 5 kilometers if you returned the same way you can in an entire loop but I find that boring so when there is an alternative I take that as I get to see a new section of trail and you never know what you will find. I’ve attached my GPX map below, which you can download here for use on your Garmin, smartwatch or another app.

HOW TO GET TO MORGENBERGHORN HIKE TRAILHEAD

I was staying in Interlaken so my directions will be from there. However, the most important thing to know is that you need to begin the hike from Aescherid Schulhaus. I took the train from Interlaken West to Spiez and then the bus from Spiex to Aescherid Schulhaus. That journey took me almost 2 hours because the first train was late, which meant I missed the bus that comes hourly. No dramas as I wasn’t in a rush but just so you know to leave a little extra time for delays like that if you are going for a sunset. Once you arrive at Aescherid Schulhaus, there is a big set of yellow signs. Follow the one that says Morgenberg and you are one your way as the rest of the trail is signed very well. There is water available along this trail at several points but no water, drinks or food are at the summit as you can see from the photos. Just a flag. 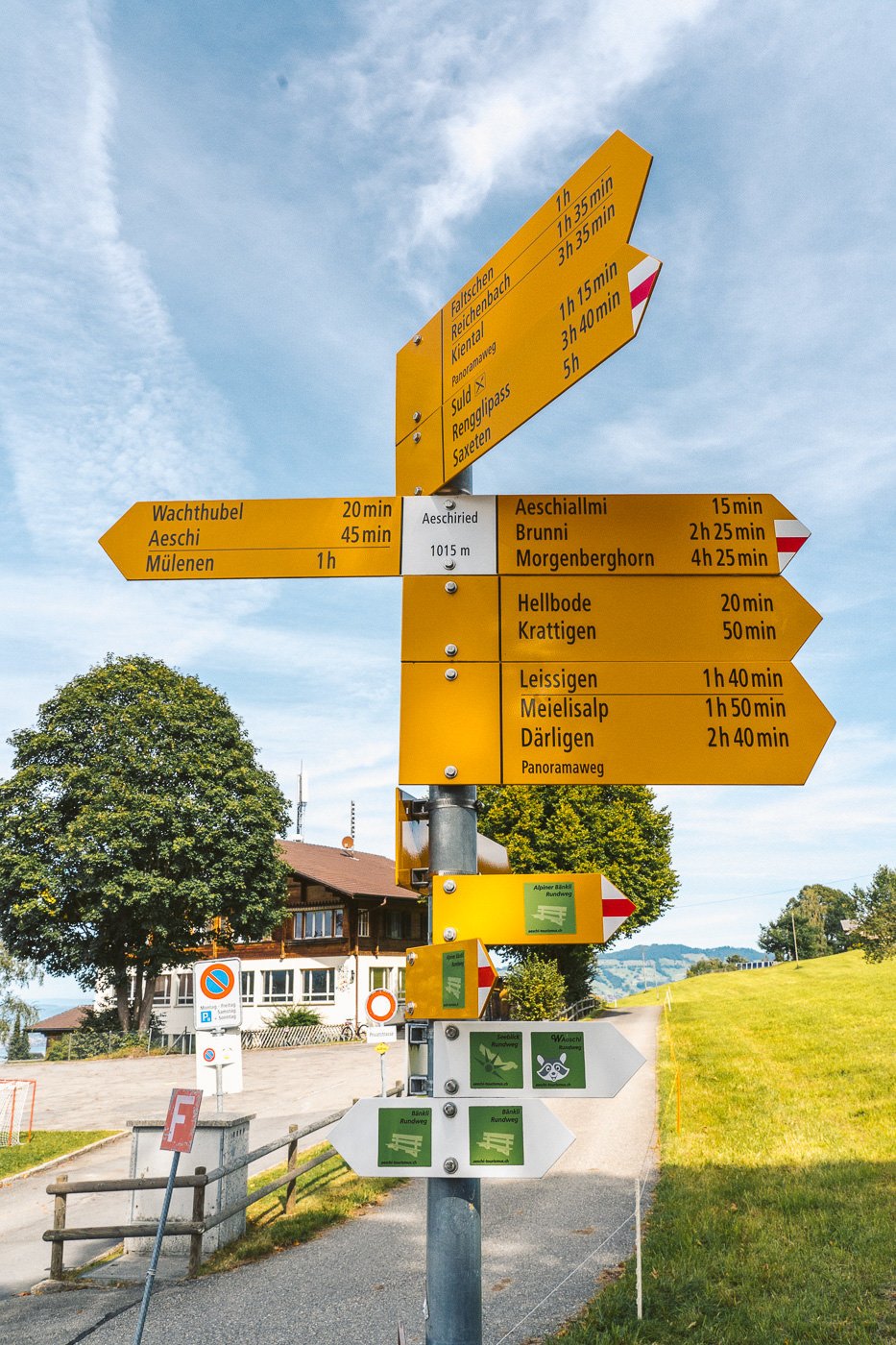 MY DRONE VIDEO FROM MORGENBERHORN

MY EXPERIENCE ON THE MORGENBERGHORN HIKE

My journey began in Interlaken where I caught the train to Spiez from Interlaken West. I then had to wait almost an hour (I must have just missed the hourly bus) to Aescherid Schulhaus. The bus drops you right at the trailhead, which is marked by the yellow signpost I posted a photo of in the above section of this blog post.

The sign at the trailhead says 4hrs and 25 mins (with 1300m incline) but I decided to have a crack at doing it at a good pace the whole way. Therefore I don’t have too many general trail photos to show you along the route except for one important photo of the chains.

The hike begins on a road for a few hundred meters before veering off to the left into a field, likely full of cows. There isn’t too much to note for the first part of the trail except that it is constantly uphill and quite steep. I think in the first few kilometers you will do more than 600m of incline so be ready to go from the start.

Make sure to always look over your shoulder as the view of Lake Thun and Mount Niesen get better and better as you climb up the hill.

About halfway through the hike, you reach a bit of a plateau. Here you can see up to your right where the Morgenberghorn looms over the trail. You can also spot the small mountain hut between yourself and the climb up Morgenberghorn. At the mountain hut, you can get coffee and some food but I didn’t stop around to taste-test, I was on a mission. At the mountain hut, my watch said 1:08 and the sign said it was still 2hrs until I reached the summit of Morgenberghorn. I thought it would be impossible to go under two hours but I guess the signs are meant for people casually walking up.

From this point on the trail is very steep and you are often walking up rocks with odd-sized stairs. It becomes increasingly difficult to use hiking poles but they do still help you throughout the climb.

There are several sections of the climb where you use chains to haul yourself up. You aren’t exposed on either side and to be honest, I don’t think the chains were 100% necessary but they definitely helped and I did use them. There are a couple of sections to navigate like this and I took a photo so you can assess whether this is within your capabilities or not before you get that far and are unsure if you want to continue.

After the chains, it’s a final push to the summit, which I powered up to in a time of 1hr and 51 minutes. Not bad considering I was carrying my drone, camera gear, water, food, jackets, and batteries. Let me know in the comment below if you beat that with your hiking bag on!

At the summit, I finally took a moment to relax and had my lunch and some water. I also finally took some photos of this beautiful panoramic view. You can see all the way down to Lake Brienz and of course Interlaken. However, the prime view is of Lake Thun, which is in full view in front of you!

Behind you can get a glimpse of ‘The Big Three’ when the clouds clear. Those are Eiger, Monch, and Jungfrau. In all directions, the view was just incredible and I actually stayed at the summit taking it all in and flying the drone for 1.5 hours.

Heading down there are several options. Obviously you can turn around and loop back along the same route that you started on. Or you can take one of the ridges to Darligen or Leissigen, which I cannot comment on as I didn’t do it that way. I decided to head down towards Wilderswil, which was about 11km away and ended up being quite a journey.

It was scenic to begin with on a nice ridge down from the summit but halfway through the return to Wilderswil I reached Saxeten and from that point on I was literally walking on the road for 5-6km, which isn’t really the hike home I had in mind. I’m not sure what the best option down is but I still preferred something new than returning on the same track to Aeschirid.

I reached Wilderswil after 19km of hiking for the day and really enjoyed the challenge of 1300m incline to the top and of course the incredible panoramic views I was rewarded with at the summit.

Hi Jackson ! What great info! We plan to visit LAKE THUN next time. Loved your.