Bachalpsee is one of the most stunning alpine lakes in Switzerland, surrounded by wildflowers and adorned with an incredible backdrop of glacial mountains. The beauty of the Bachalpsee Lake is that because there is a cable car to First, it just a one-hour trek from the First station to the lake, despite being located at 2,265m in altitude.

Hike Distance: After the cable car to First the hike from First to Bachalpsee was 3km one way and you will need to hike back so 6km in total.

Hike Difficulty: Very easy. Dirt trail the whole way. Some incline but nothing too major just 188m up and 188m down.

HOW TO GET TO BACHALPSEE LAKE

The most common way to reach the Bachalpsee Lake is to take the cable car from Grindelwald to First and then to trek for one hour along the easy path to the Bachalpsee. You can hike all the way from Grindelwald, although you would be directly under the cable cars, which purely becomes a need for exercise rather than achieving anything else. If you are keen for more activity, continue on from Bachalpsee up the steep hill to reach the Faulhorn Summit.

As you can see on the map below you need to go to the Firstbahn Station in Grindelwald, purchase your ticket and ride all the way up to First then hike to Bachalpsee Lake. 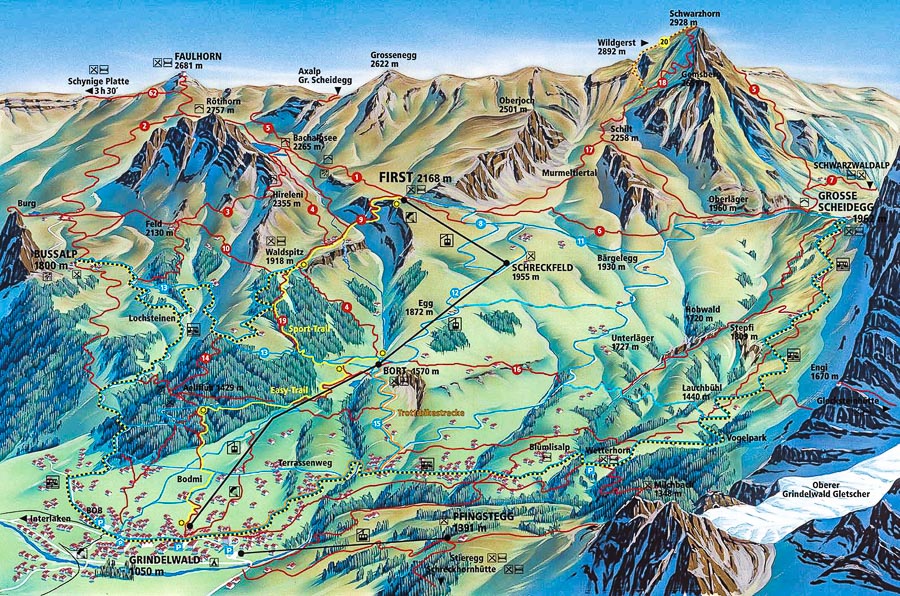 The first thing you need to do is to get to the Firstbahn in Grindelwald. The ticket was 30 CHF (27 USD) one-way to First. Here you can use your Swiss Half-Fare Card so you only need to pay half of the ticket price, which is exactly what we did. If you prefer to book your ticket in advance online to avoid lines you can do so here. You can book a return trip but on this day I actually continued to Faulhorn and then hiked down to Bussalp. The cable car runs about every 30 minutes. To be sure of the current operating times you can check here.

The cable car was pretty amazing with views of Eiger and all of the peaks that look over Grindelwald. It was about a 25-minute ride to First and we enjoyed it all the way!

It is possible to hike up from Grindelwald to First but you re walking on a paved path, directly underneath the cable car. It isn’t an adventure, purely a workout. It will save you some cash but cost you a couple of hours.

At First it will likely be chaotic with tourists. Anywhere in Switzerland that is accessible by cable car brings with it the hoards of summer tourists that don’t like hiking but want the views. First is no exception and actually encourages these types of tourists with attractions at their station such as a traditional Swiss-style restaurant where you can grab lunch before heading out on the hike to Bachalpsee.

There is also a pretty epic viewing point called the First Cliff Walk. This cliff-walk (albeit touristy) is actually pretty wild, and for me to admit that given how touristy it seems is tough. The railed, walkway winds along the edge of the cliff, as you walk seemingly on a suspended path until you reach the big ‘cliff walk’. Here you venture out onto a platform, almost walking the plank pirate-style. You can see through the floor and of course enjoy the incredible views all around you if you can’t bear to look at the giant drop below you.

There is also a zipline and other activities at the top of First including the option to Go-Kart or Scooter back down the hill instead of taking the cable car. 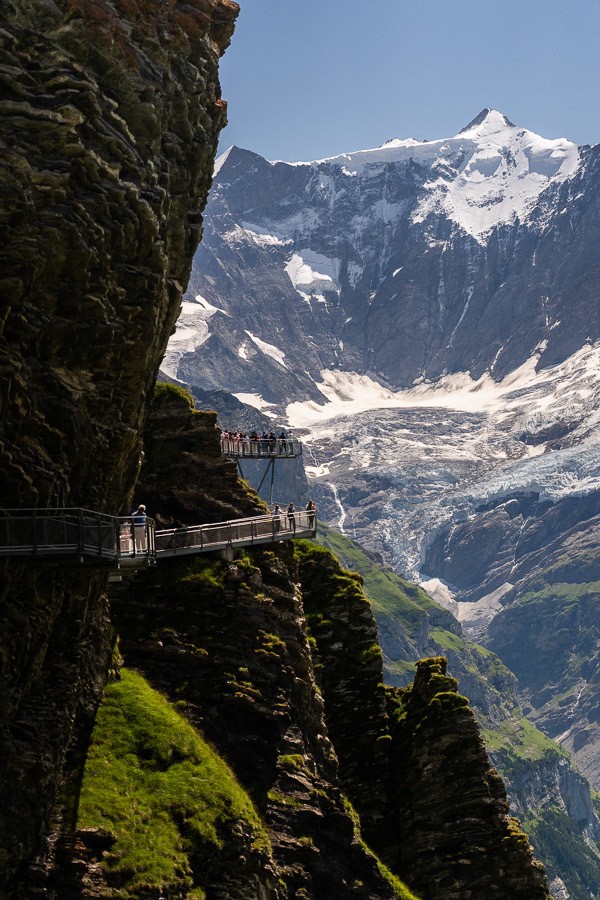 The hike to Bachalpsee from First is 6km round-trip on a moderate incline of only 188m over the journey. It is a popular route, as how often can you enjoy an alpine lake above 2000m incline in the Swiss Alps after having only walked for an hour. Lots of tourists accept the challenge and make the short hike out to the lake. Having said that, I went in the peak of summer and even then it wasn’t too crowded and was a good family-fun vibe on the trail and at the lake. There’s plenty of room and plenty of lake for everyone. 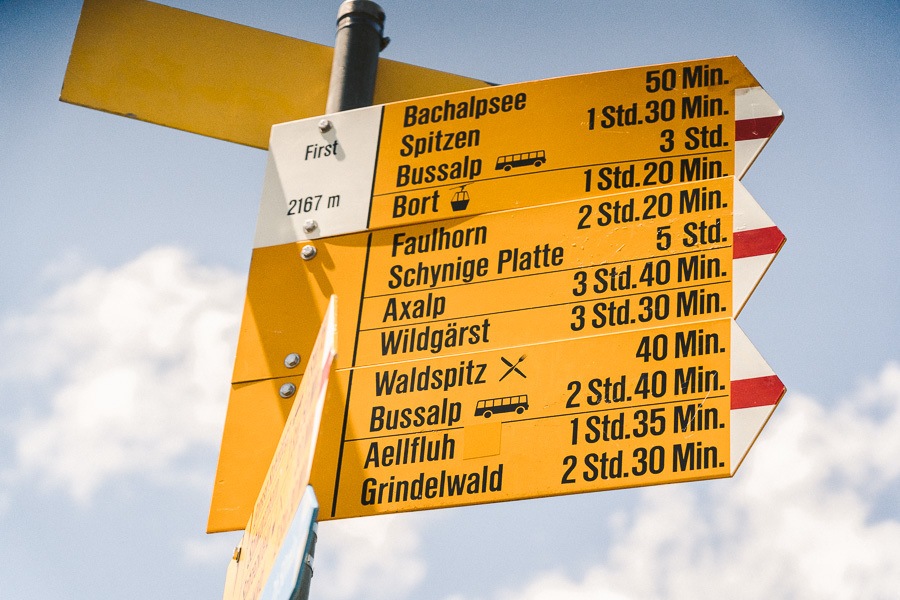 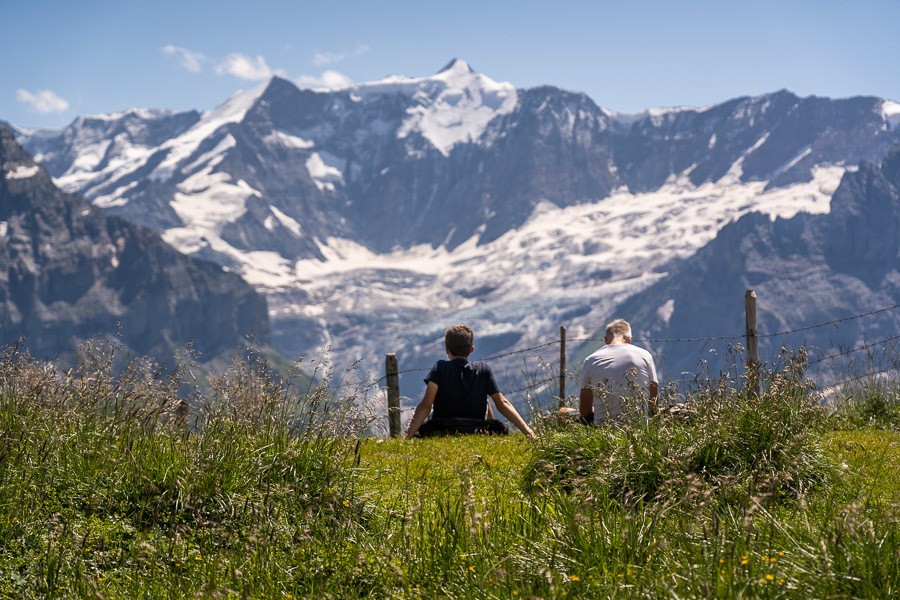 Although it is a simple hike, you are surrounded by the epic mountainscape for the entire journey. There’s many moments too beautiful to pass by and the 1-hour journey took us 2-hours as we stopped all too often to take it in. I advise you to do the same. Enjoy your surroundings because this is truly one of the most beautiful regions on the planet. 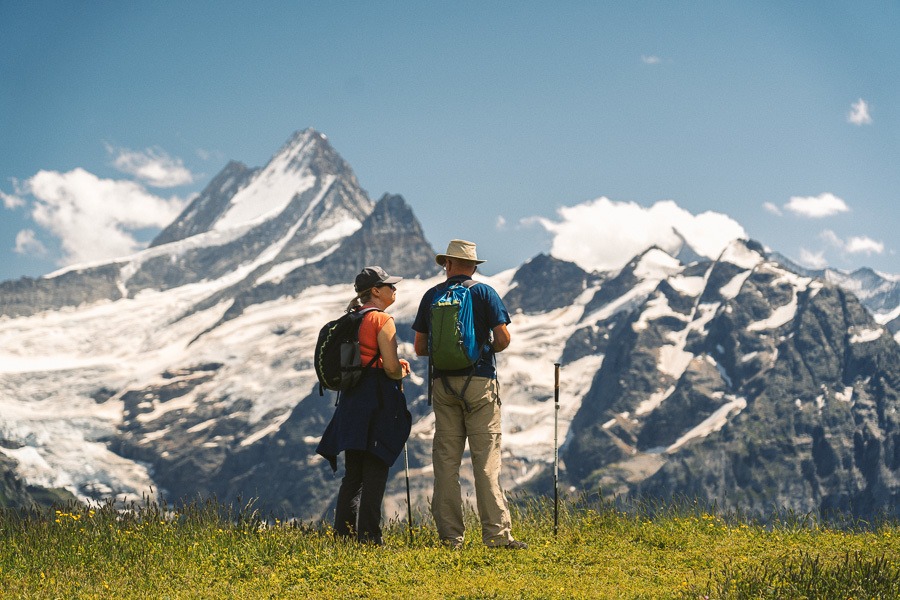 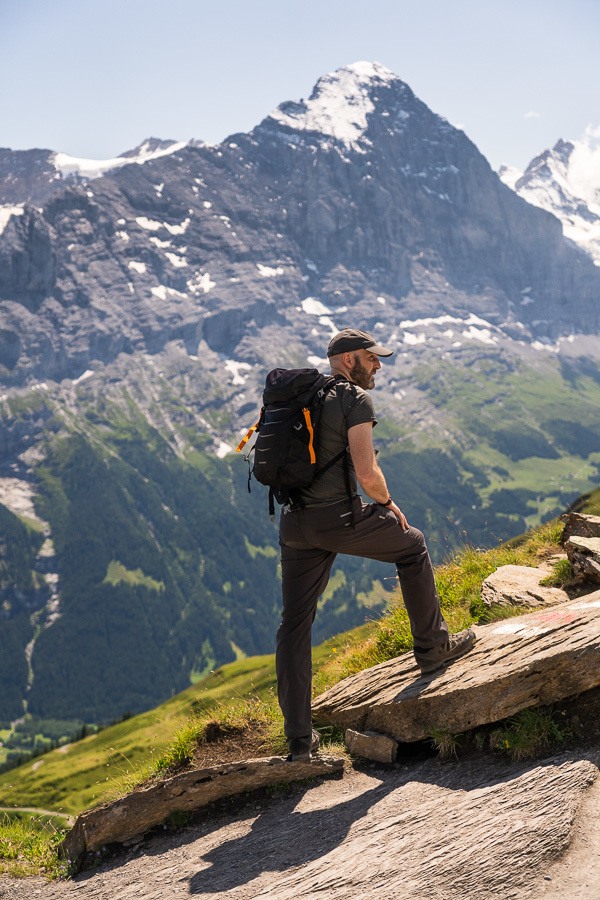 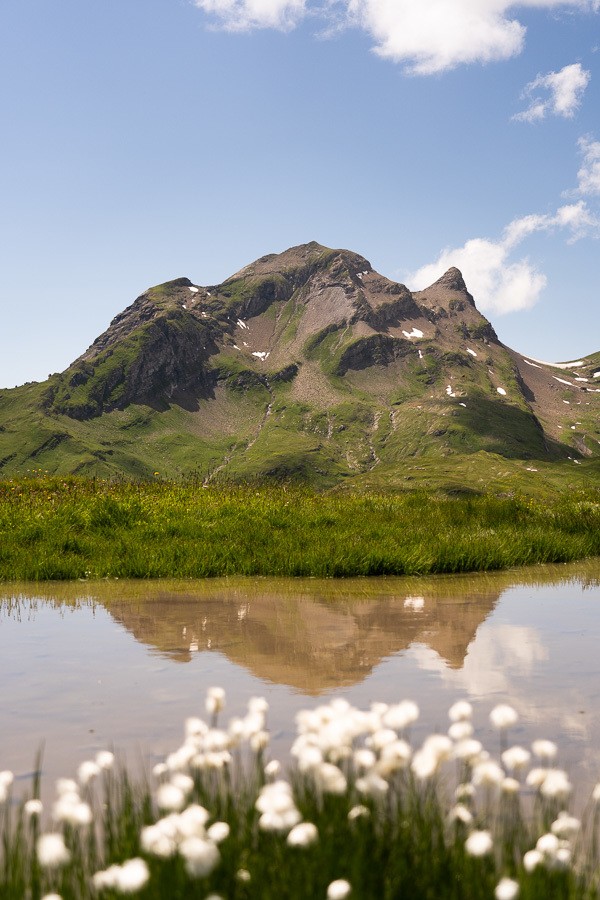 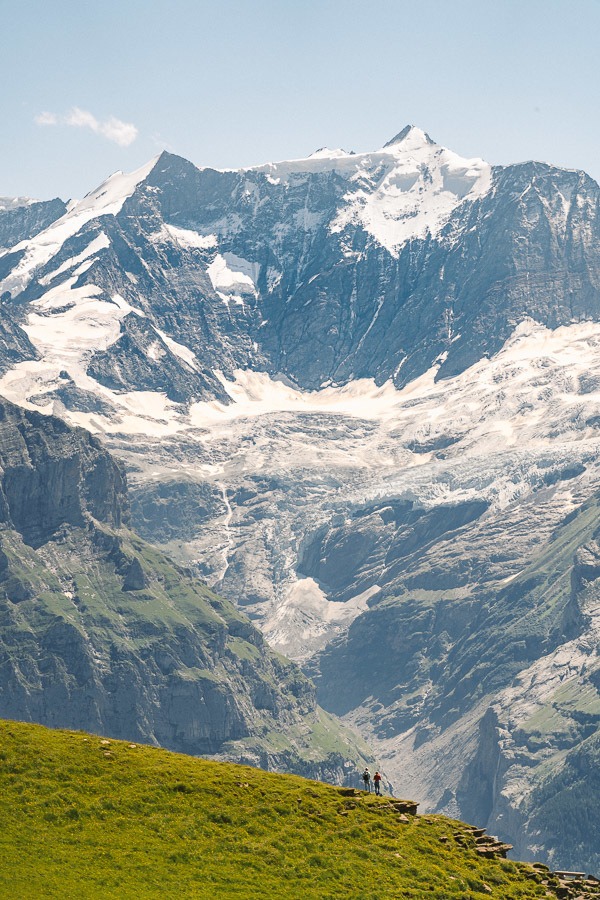 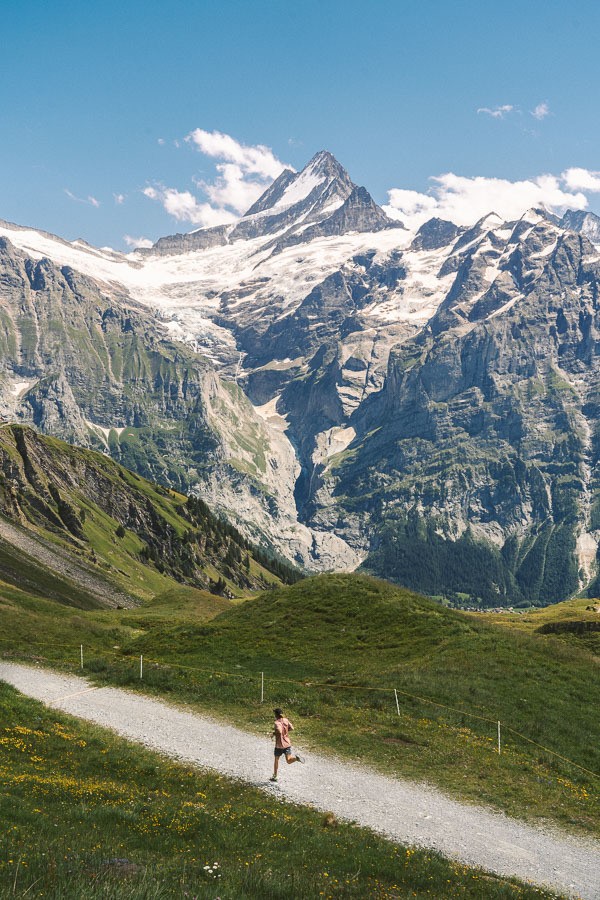 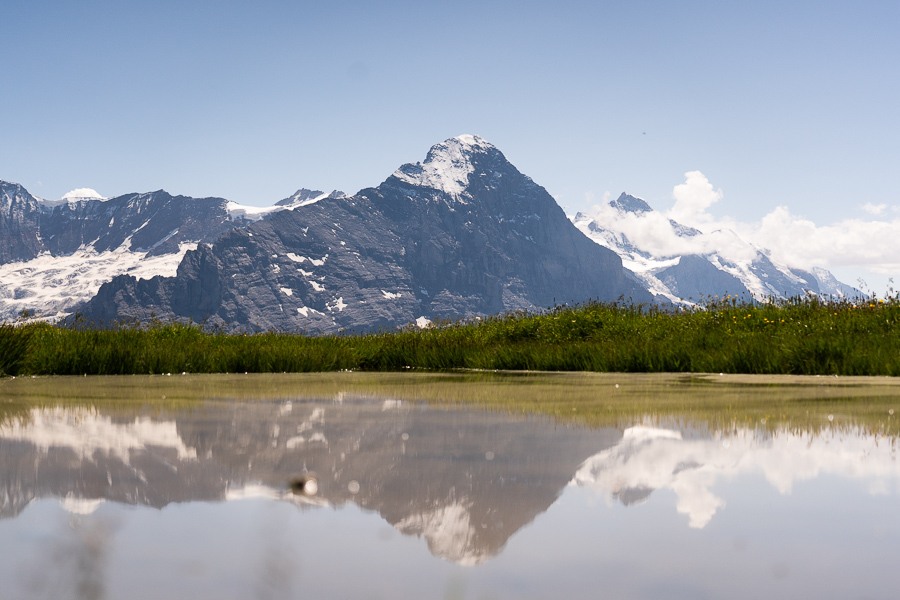 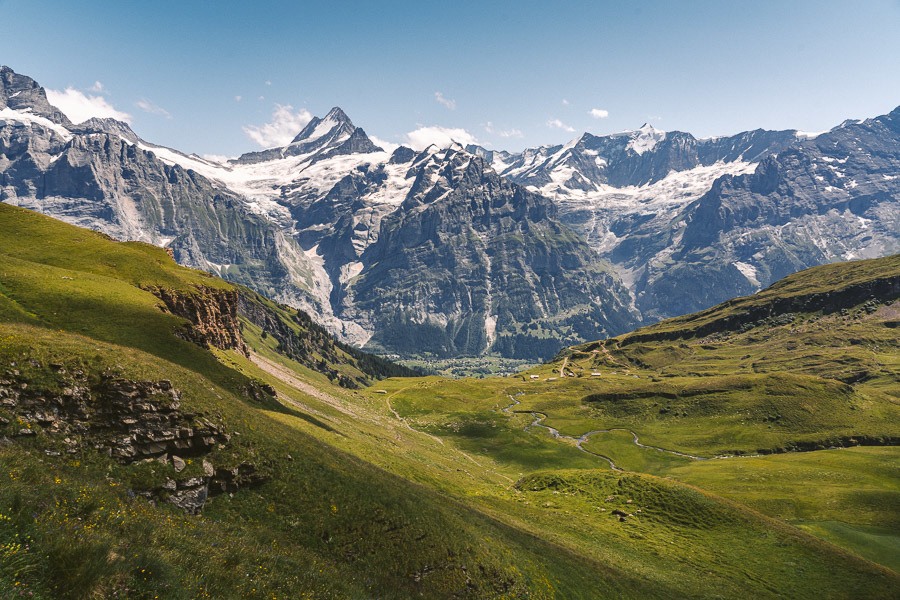 After an hour journey from First, we finally turned the corner to reveal the Bachalpsee Lake. Wildflowers almost breached the path and probably would have if not for the steady stream of tourists enjoying the lake. With a backdrop of glacial mountains and perfectly still water, this was a truly idyllic location. 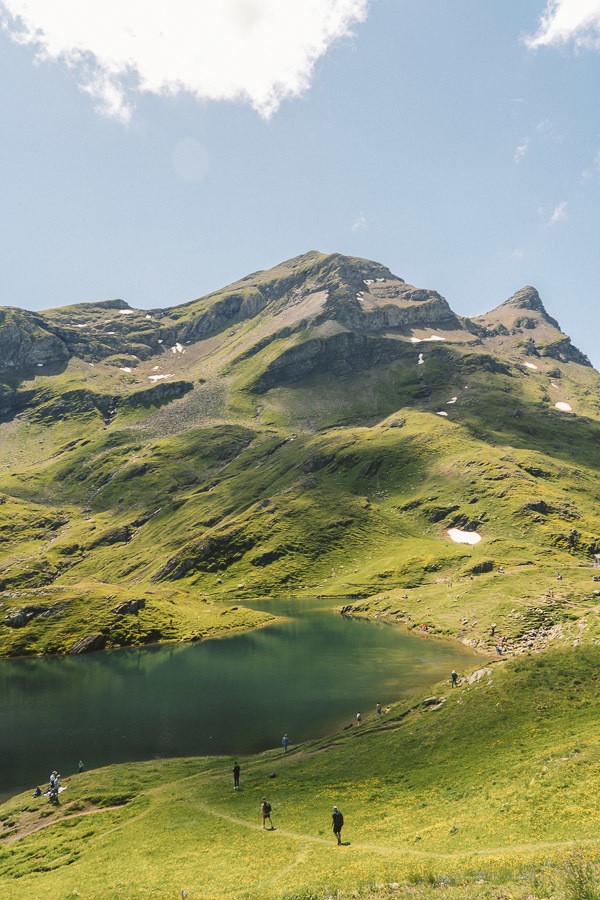 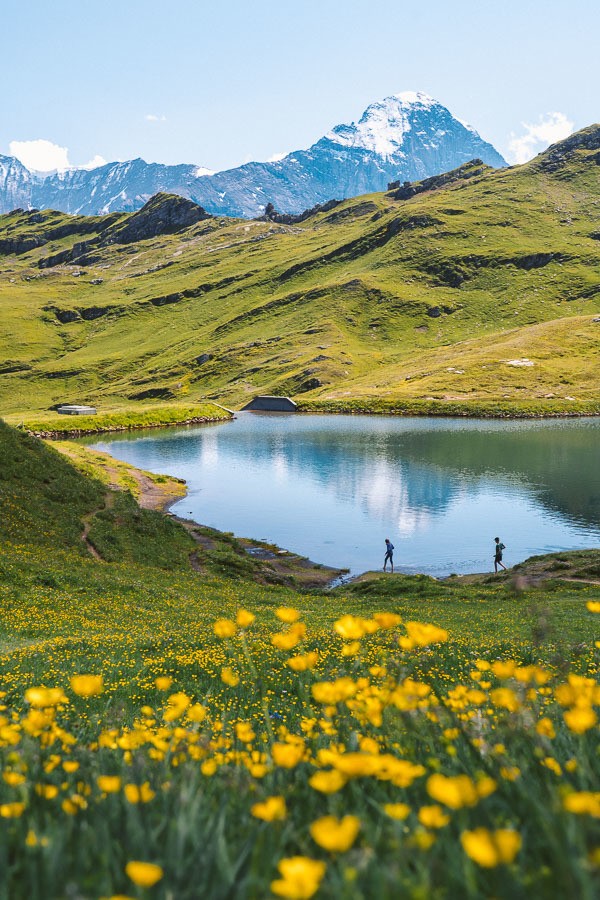 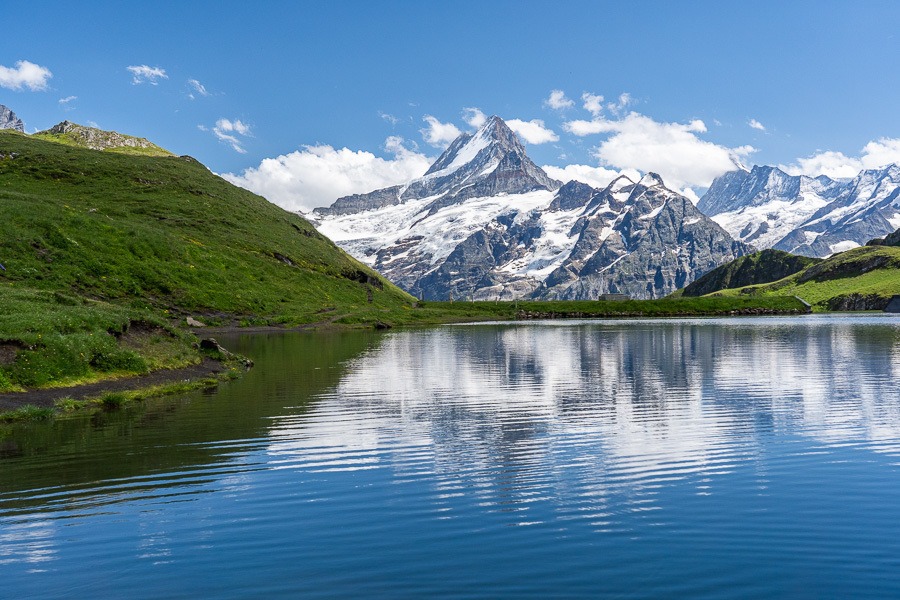 There are no cafes, restaurants or buildings to ruin the view, just a beautiful lake in the Swiss Alps. The Lake is actually two lakes although often it may be joined. In the winter this entire region is definitely joined as it is covered in a thick layer of snow. 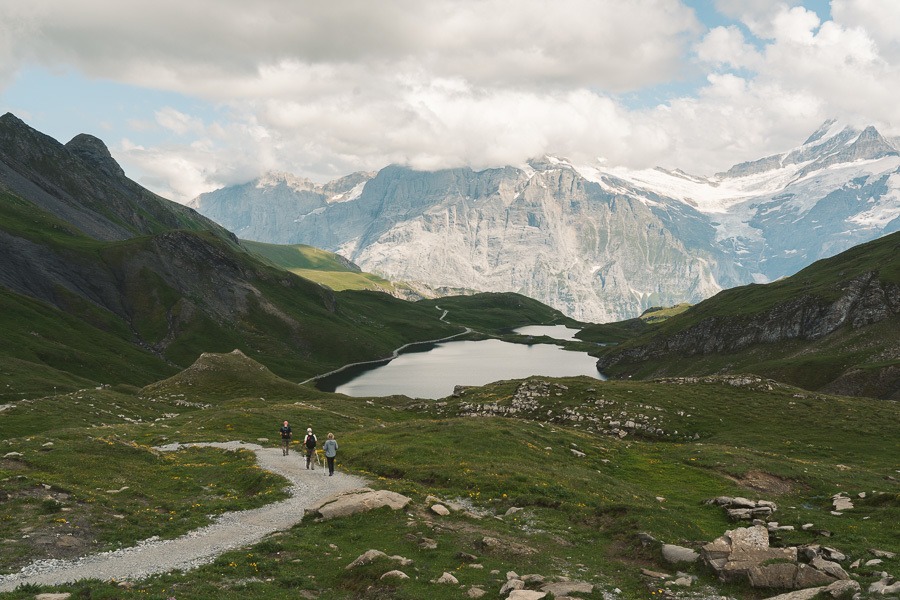 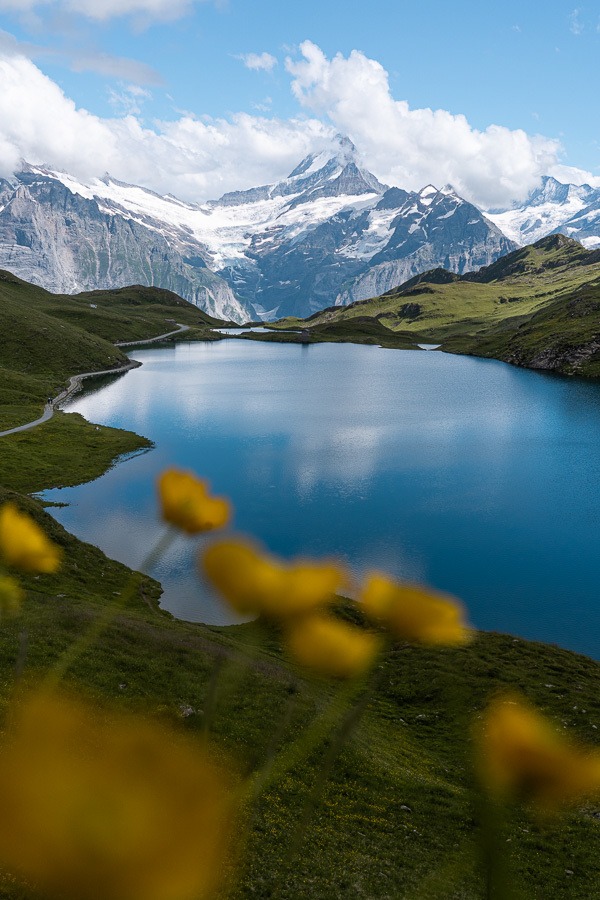 Boys being boys, we decided it would be a great idea to jump into the lake without testing the temperature. Bad idea! It was damn freezing and I was out of that water quicker than I was in it! It took me the whole afternoon to warm up. 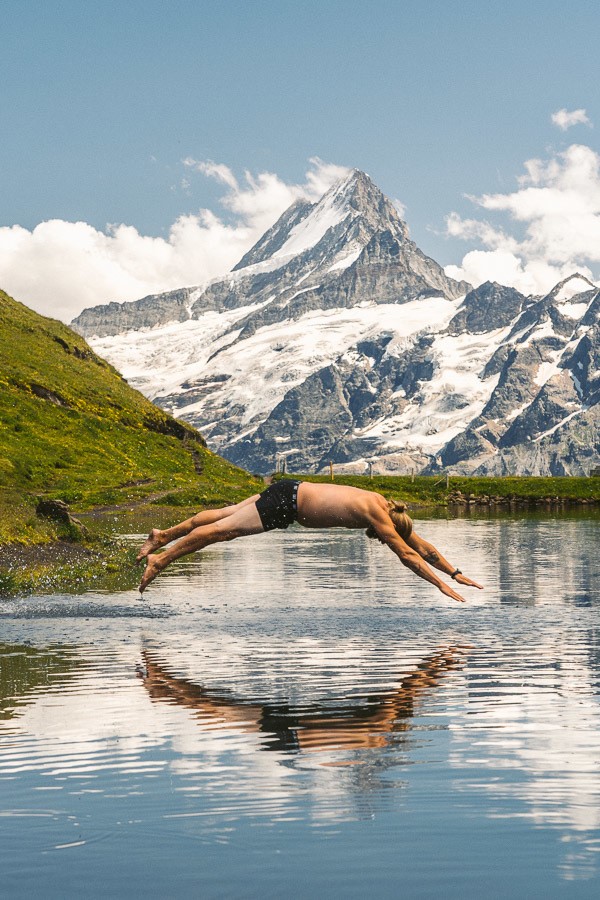 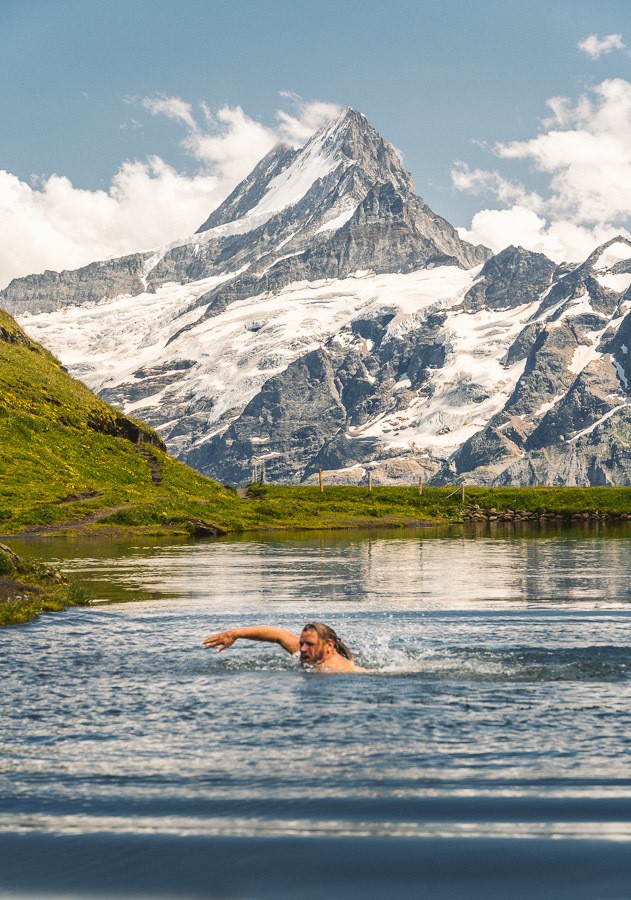 You may see some furry fellas scurrying around. It’s not a cat, not a beaver but in fact, a Swiss Marmot as I pictured below. 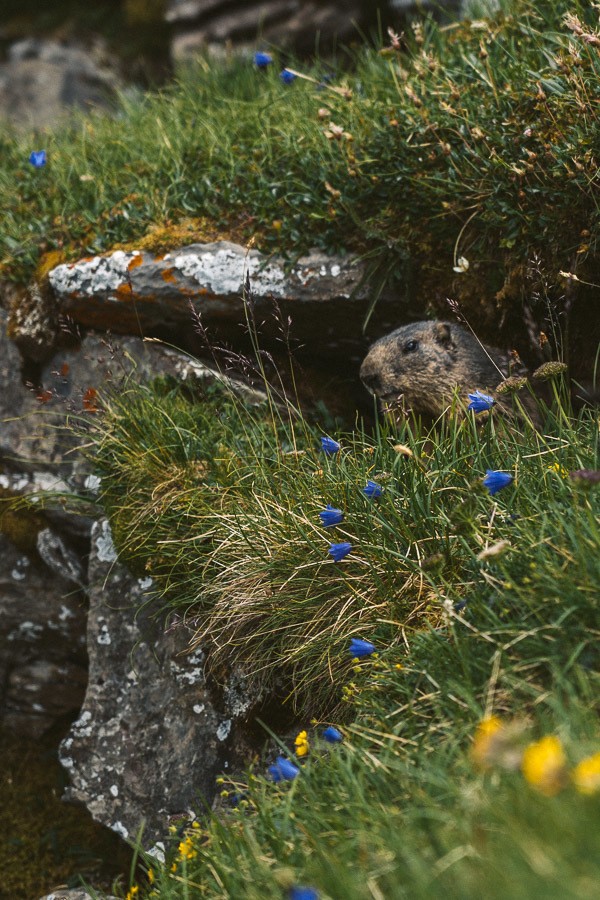 After chilling by the lake for a little while I sent the drone up to observe Bachalpsee from an aerial perspective, which was incredible and the views from above were just out of this world. 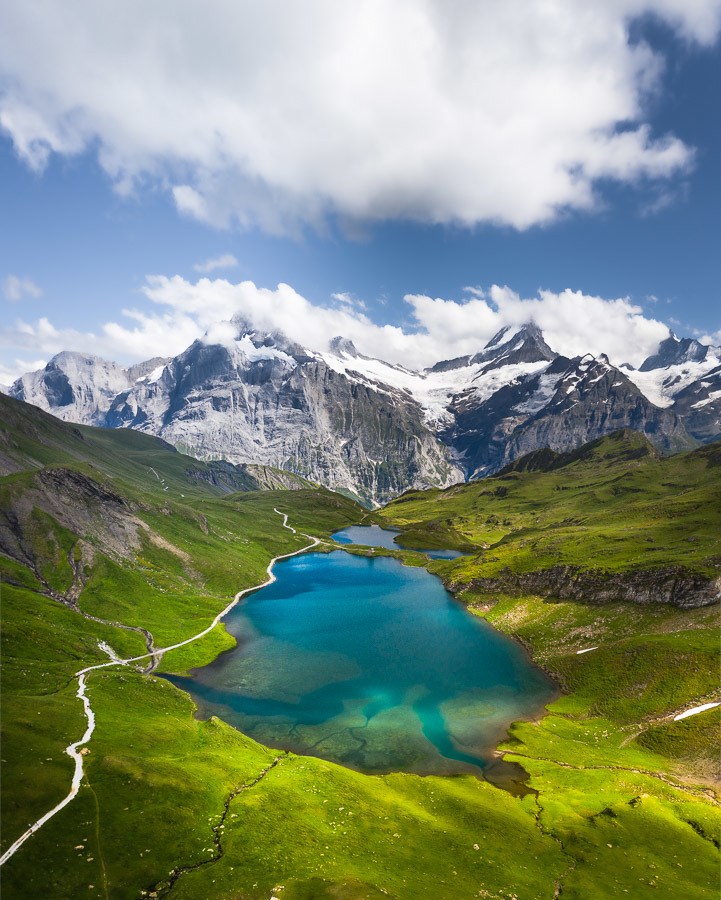 From Bachalpsee you can either return the 3km back down the hill to First Station and catch the cable car (or hike) back to Grindelwald. If you are feeling up for an adventure as we were, you can hike another 500m of the incline up to Faulhorn, which takes about 1.5 hours. From there you can either return all the way to First or head down multiple different routes such as Bussalp as we did. 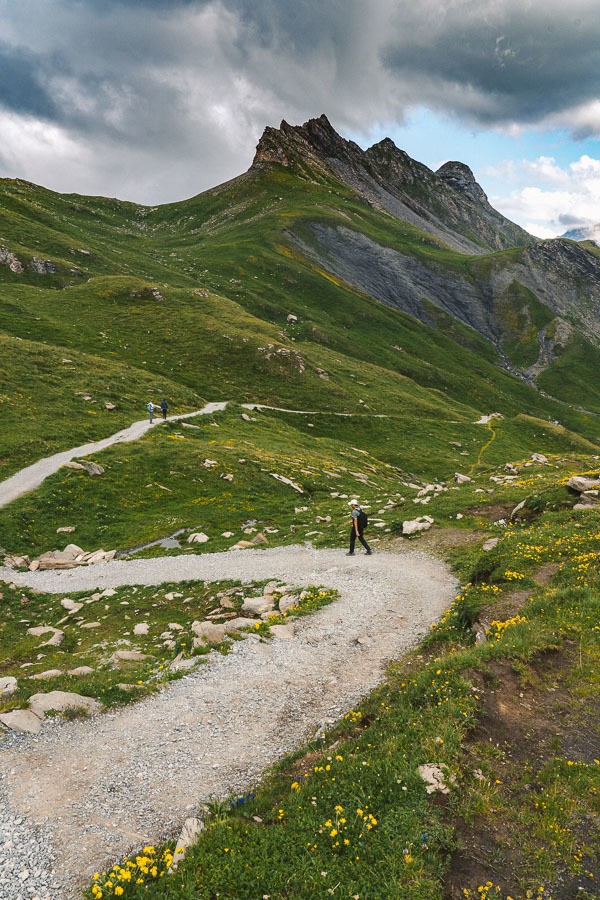 The walk up to Faulhorn 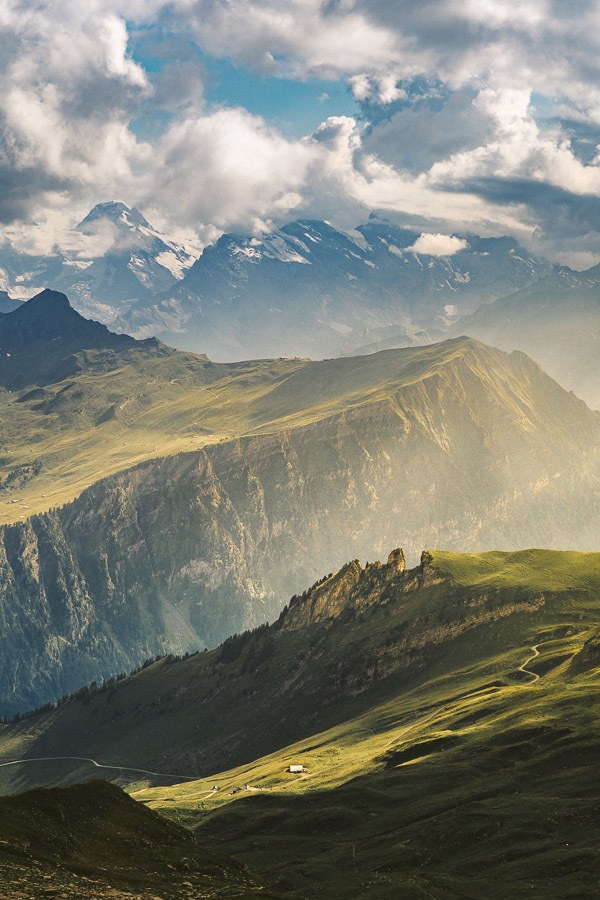 The view from Faulhorn Summit

Hello, love the content of this blog post! May I know which month did you visit Lake Balchapsee? The weather looks fabulous! Thank you so much for your reply.