Le Moleson to Teysachaux is a fun but challenging day-hike that involves a little bit of rock-scrambling to reach epic panoramic views of Gruyeres in the Fribourg region. The hike can be done in its entirety or by using a cable car to head up and down the majority of the incline, meaning you can enjoy the variable ups and downs of the ridge between Le Moleson and Teysachaux without having to work too hard!

Hike Distance: Without cable car from Le Moleson Summit to Teysachaux Summit and Return was 13km

Hike Difficulty: Steep in parts. Parking lot to Moleson was very safe with no drop-offs or climbing. The final climb up to Teysachaux was technical with moderate rock-clambering required but no moments of exposure as it was climbing up a linear incline. Minimal chance of falling off of the cliff face. That section of trail was rocky but only lasted for 15-20 minutes.

As always in Switzerland, there are many ways to go about getting to Moleson and Teysachaux. I will detail exactly how I did it and also make recommendations that include the cable car and the best plan of attack now that I know the routes and logistics having been up there.

The cable car leaves from Plan-Francey at 1,520 m. The 60-passenger cars take you to the summit of Le Moléson at 2,002m.
You can check the cable car prices and timetable here.

Below I’ve added the GPX map recorded from my Garmin Watch and uploaded to Strava. I recorded the descent from Teysachaux on a different activity but we went down the same route we came up so you have the full route there. As you can see we came up from the parking lot and turned left to go to Moleson. We then went back past our intersection and visited Teysachaux. We then came down from Teysachaux and descended back to the parking lot.

We originally planned to take the cable car from Plan-Francey but somehow ended up at a random parking lot next to a restaurant. It turned out to be Gros-Plane. There are two routes to Le Moleson from Gros Plane so we just decided to forego the cable car idea and hike up, along the ridge and down. Our short hike had turned into a long one!

The hike begins down the hill and through a small valley, which you can see a photo of below (I took this photo of the valley and restaurant from up on the ridge).

The trail is on a wide dirt road for the first thirty minutes before you join a paved road that heads up to the right. There are yellow signs the whole way so you cannot really get lost if you stay in these main paths and follow the signs. Once you hit the paved road, the trail starts to get quite steep. It is a gradual incline but unrelenting until you reach the ridge.

The trail soon reaches farming areas with a few cabins and you sense you are getting quite close to the ridge. On this day there was a huge fog and we realized we may never see the view. That is how it is sometimes but you never know if you don’t go and sometimes the fog can be quite interesting in itself. 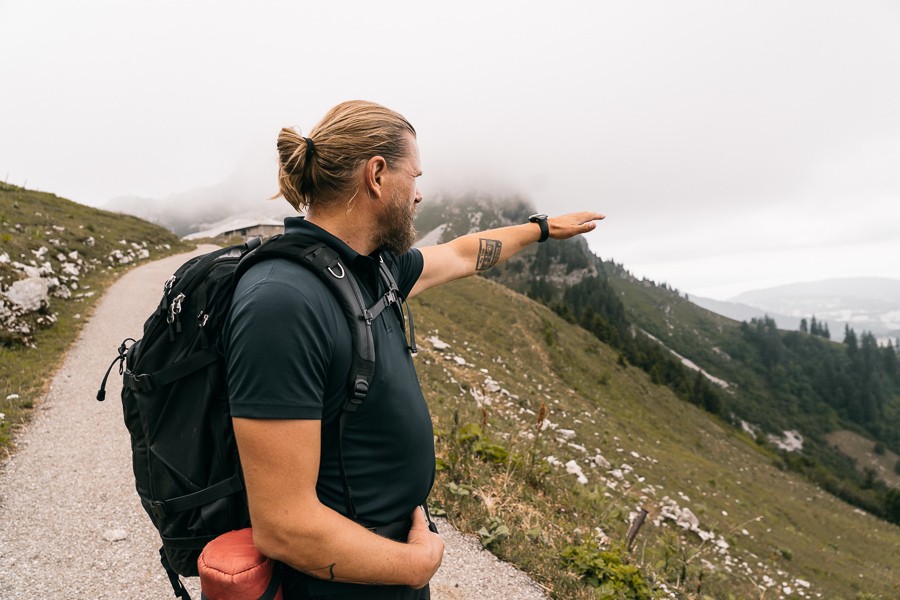 The final ascent to the ridgeline leaves the paved road and is now just a worn grass path. Dodging cow poop and potholes we meandered our way up to the ridgeline. Here we were greeted by a big cloud of fog although we knew there was an epic view behind the white wall of nothing. 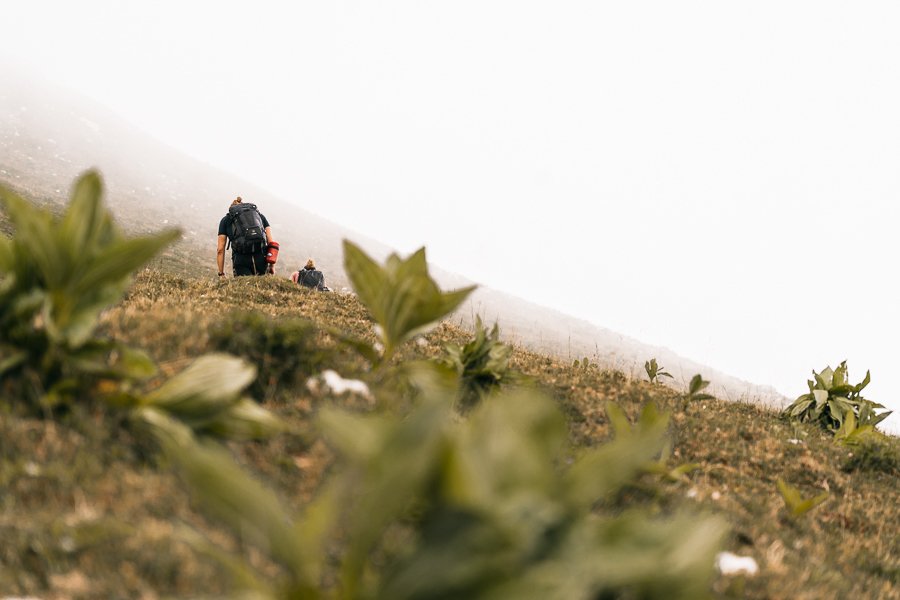 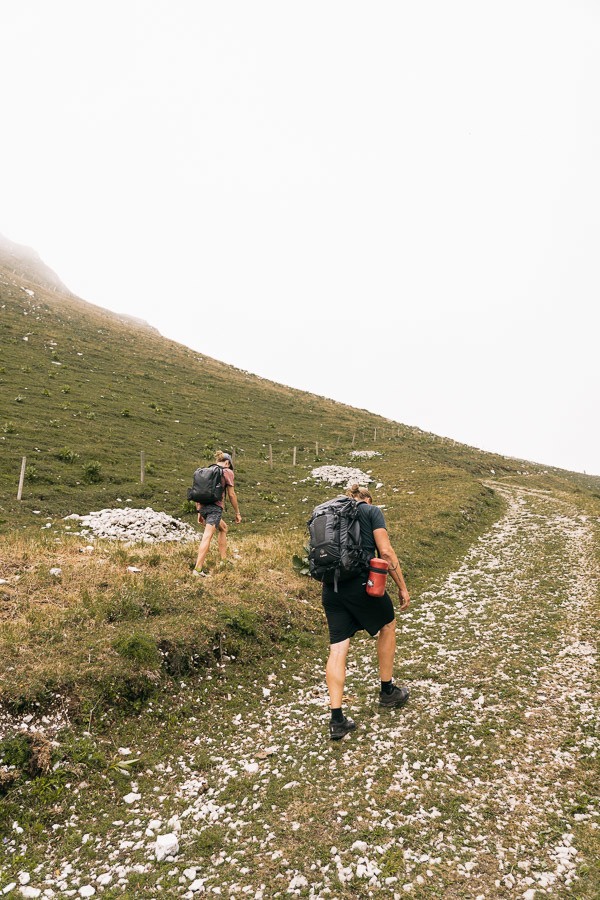 At this point we were now quite near the base of Teysachaux to the right and just a couple of kilometers to the left we would find Le Moleson. We decided to head left past all the cows and hopefully find Le Moleson summit and restaurant.

It wasn’t long before we arrived to Le Moleson summit after a few ups and downs along the ridge. There wasn’t much going on inside the fog other than a few cows blocking our way. A bit defeated, we sat at the restaurant and had a coffee. Here we debated taking the cable car down and walking along the road back to our car, our returning the same way.

All of a sudden the clouds begin to part a little and we decided to miss the last cable car and see if we could get lucky with the fog clearing on the way back and possibly head up Teysachaux as we had intended to do.

The fog was now clearing and the trail was starting to look epic as fog poured down one side, while the ridge became clear. We were so glad we had persisted through the fog as we were now being rewarded with great views in all directions.

The walk back to Teysachuax takes less than 45 minutes if you walk directly without stopping for photos. It’s mostly downhill and on a pretty good trail. You could do the round trip from Le Moleson summit to Teysachaux and back in under 2.5 hours quite easily. We obviously took longer taking photos and also just taking our time and enjoying the scenes. 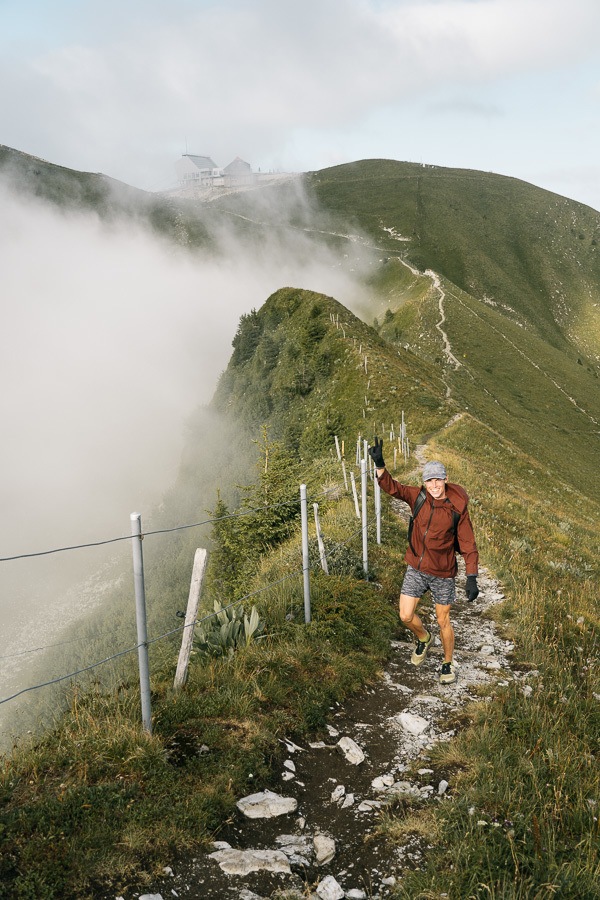 We had now made it back to the intersection of our initial ascent. Here we had the parking lot down the hill, Le Moleson where we had just come from and in the final direction was Teysachaux. From this point, the climb to Teysachuax is only about 5-10 minutes of walking away. Once you arrive at the base of the climb, it may seem a little intimidating but once you get going, it really is just a clamber up with no huge drop-offs. You are never really exposed to an overhang or a drop-off as the trail continually leans into the incline. You will find yourself using your hands as you clamber up.

Once at the top of Teysachaux we had amazing views of the lakes and peaks in all directions. In winter this summit is mountain is covered in snow. That night, two others were camping up top, which would have been an epic spot to wake up for sunrise.

We hung out on top of the mountain beneath the cross enjoying the beautiful but cloudy sunset as we explored the little ridges on the far side of Teysachaux.

It was now getting dark, so we quickly made our way down the Teysachaux climb in the last light before using our torches to make our way back down the hill to Gros-Plane where we had parked our car. It was a great adventure with lots of nice views without too much incline (especially if you take the cable cars!) This was the lingering sunset on the way down. 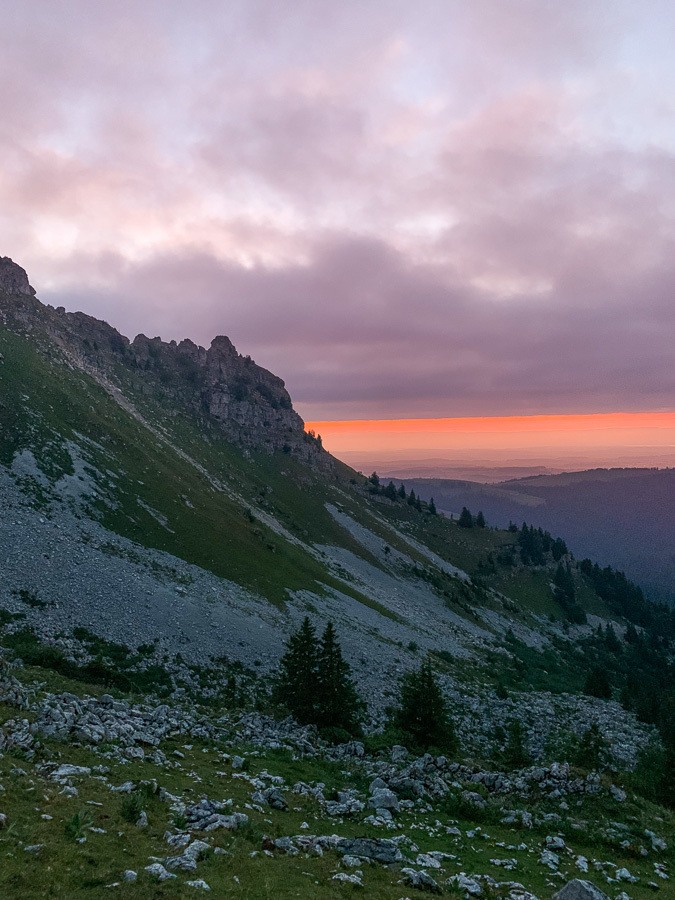 The cable car leaves from Plan-Francey at 1,520m. The 60-passenger cars take you to the summit of Le Moléson at 2,002 m, where a superb panorama awaits without any stair. As you head up on the southeast side of the mountain, the horizon expands beyond the borders of La Gruyère to reveal many other regions. There are a restaurant and toilet facilities at the summit where the cable car arrives.

You can check the cable car prices and timetable here.