Mount Niesen was a hike I hadn’t heard too much about but it delivered in so many different ways! The cable car is so steep it’s exciting, the views on the panorama trail to the summit were incredible and then to be above the clouds at Niesen Kulm Berghaus enjoying the sunset was out of this world. I’ll share it all with you in this blog post including the different ways to reach the summit.

Hike Distance: The distance from Mulenen to Niesen Kulm is 7.7km or you can do as I did and catch the cable car to Schwandegg station, which is halfway up and then hikes from Schwandegg to Niesen Kulm, which took me 1 hour and 13 minutes to complete the 4.8 kilometers with an incline of 646 meters. The recommended time is 2-3 hours if you are coasting.

Hike Difficulty: The trail is quite easy and there are no moments of serious exposure. The incline is the hardest part about this hike and if you aren’t confident, starting halfway at Schwandegg is advised because from Mulenen it is 1700m of climbing, which is a bit too much for a beginner but fine for regular hikers.

HOW TO GET TO MOUNT NIESEN

Once you have arrived at Niesenbahn you have a few choices as I briefly mentioned above.

There are other routes connected in the region but the majority of visitors are taking one of those three options. I chose to take the cable car to Schwandegg and hike up from there as I had already hiked down from Glecksteinhutte and Chrinnenhorn earlier that morning.

I’ve attached my GPX map below, which you can download here for use on your Garmin, smartwatch or another app.

The Niesenbahn cable car is actually an interesting one because throughout summer it has several nights a week where it operates as late as 11 pm! When I found this out I specifically chose a Wednesday so that I could hike up during the afternoon and then stay up for sunset, have a bowl of soup for dinner and then take the cable car down in the dark. My plan worked perfectly, although make sure you check the train timetables to and from Spiez if you are returning late, there were only a few options when i got back down to Mulenen.

To check the timetable of the Niesenbahn so you can make your plan accordingly you can click here.

The prices of the Niesenbahn are:

If you have a Swiss Half-Fare Card you can use it here and only have to pay half of the ticket price. 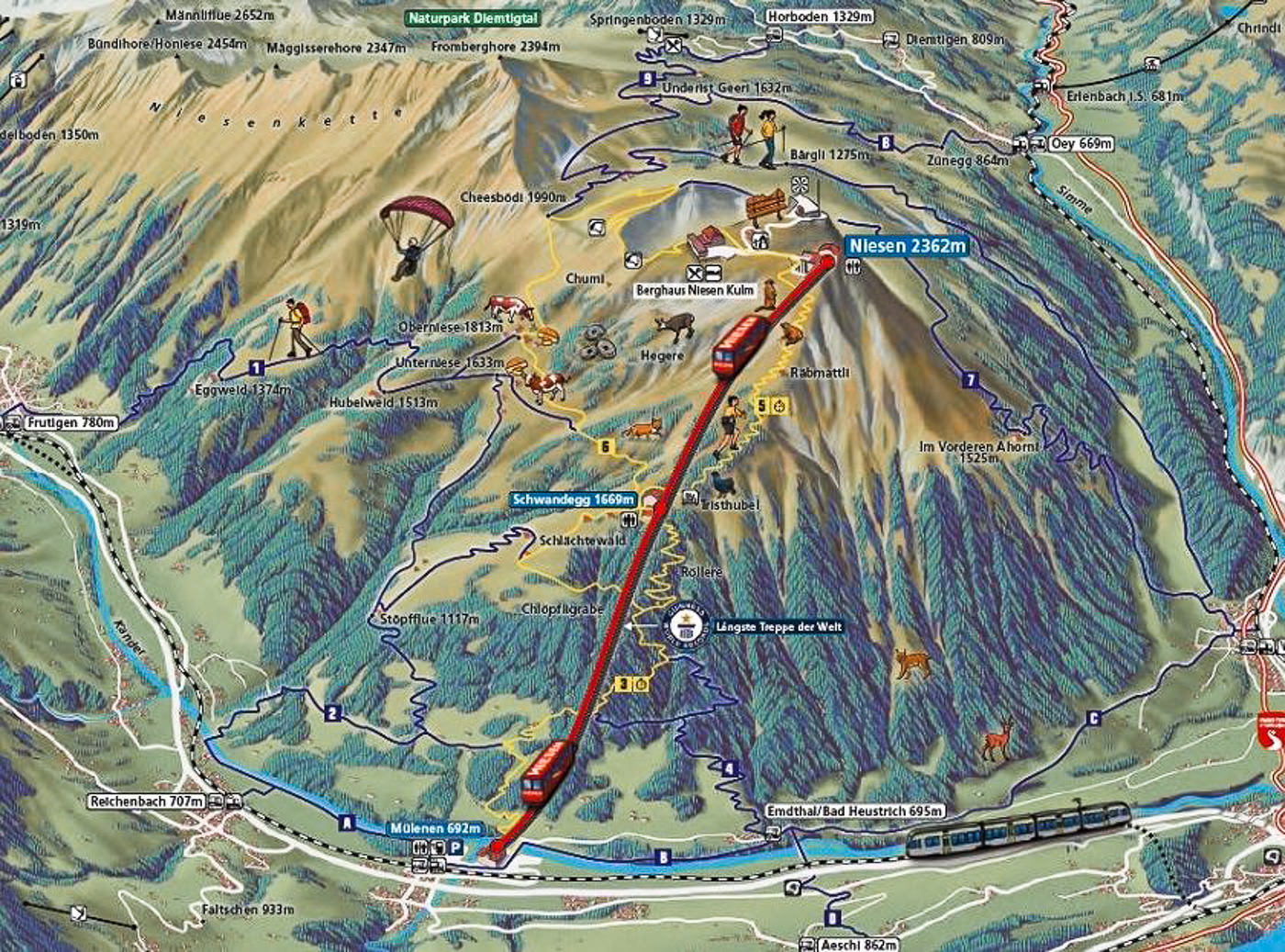 Often I like to hike no matter what the weather unless it is a storm. However, in the case of Mount Niesen, you may want to check the weather. If it seems cloudy down at lake-level and you think it’s not worth the hike, you may actually be missing out the view of a lifetime. It was cloudy all day in Interlaken, but I knew there was a chance the clouds were just low-level. I checked the webcam and sure enough, Niesen Kulm (the summit of Mount Niesen) was poking out of the top of the clouds. This means you would be on top of a sea of clouds, which is pretty much my favorite conditions of all time. As you can see from the photos in this blog, you can’t see the lake but it’s one cracker of a view.

To check the current status at Niesen Kulm you can check out the live webcam by clicking here.

Sitting in Interlaken, I looked out of the window at the hostel and clouds covered the sky. It didn’t look like a good day for sunset. However, I had planned to hike up Mount Niesen so I checked the webcam and was pretty excited at what I saw. The summit was actually above a sea of clouds. I packed up my gear and off I set.

I first walked down to Interlaken West train station and caught the train to Spiez before changing trains and heading on the train to Mulenen Bahnhof. It took about 50 minutes all up from Interlaken.

When I arrived at the Niesenbahn in Mulenen, I decided to take the cable car to Schwandegg. I’d already hiked all the way up and down Chrinnenhorn and then back to Grindelwald in the morning so didn’t fancy an additionally 1700m of incline but I’d still be getting a workout with 650m of incline from Schwandegg. The cable car was one of the steepest I’ve been on and slowly puttered it’s way up to Schwandegg.

Arriving at Schwandegg station was a little confusing as there were two trails. All of the other hikers set off on the opposite trail to me. However, I advise taking my trail! I took the panoramic route, which is less aggressive on the incline as it takes slightly longer. When you arrive at the station take the trail to Oberniese, which is on the left side of the station rather than the trail that takes you directly up the mountain. Wind around, take in the views and it’s only about half an hour extra. The sign said 3 hours although it took me 1 hour and 13 minutes in total and wasn’t too strenuous.

As I had expected the first parts of the hike were inside the clouds. I couldn’t see a thing. I was a little worried but these were the conditions I had come to expect given the weather in Interlaken. My hope was to pop out of the clouds at the top. I powered through the incline passing by uninterested cows and a few cabins. It was 45 minutes of walking looking at a wall of white, which was a relaxing time to think and enjoy the fresh air. Understandably, I took no pictures during the early part of the hike.

As I rounded a corner and begin the final ascent to Niesen Kulm the clouds cleared in front of me and just like that I was above the cloud cover. It was a sea of white, with just a few mountain peaks popping up amidst the fluff. These were dream conditions. It was still way too bright to be able to shoot the scene well but it was mesmerizing to watch the slow-motion waterfalls flow down the sides of mountains.

I know rounded out the final climb and made my way up to the Niesen Berghaus Restaurant. I didn’t go inside yet, I was still too stoked about the clouds. I explored the hills around the area and continued my exploration of Niesen.

It wasn’t long before the sun began to set and the scene becomes even more magical. I first enjoyed the scene from the official viewpoint, where you have panoramic views of the region. Mount Niesen is known as the Swiss Pyramid, and when I was up there it was a little confusing. It didn’t seem like a pyramid shape. However, when the sun shone during the sunset the shadow created by Mount Niesen was a perfect pyramid. It all made sense now.

The sunset began to take off and it was one of the most memorable nights of my Switzerland trip. I took a lot of photos but also just went a couple of hundred meters back down the hill and chilled by myself while everyone else was inside the restaurant or upon the deck. It’s a night I’ll never forget. I created a short video and have a lot of photos to show you below.

After the sunset, I headed inside to the restaurant and grabbed a beautiful bowl of vegetable soup, warmed myself up and savored the moment. I was pretty thankful to catch the cable car down instead of having to pull out the head torch and make the trek down as is common on these sunset missions. My Wednesday plan turned out to be a winner.

Incredible shots !!! I am so inspired by your photography!