The hike from Riffelalp to Gornergrat takes you along one of the most scenic routes in Zermatt. The Matterhorn is in your sights for most of the journey as you pass by several lakes with perfect reflections of the mighty Matterhorn. When you reach the Gornergrat Hotel you can relax, enjoy lunch and take in the views of the epic Gorner Glacier (Gornergletscher), which is located directly below the hotel.

Hike Duration: From Riffelalp to Gornergrat you are expecting it to take about 2 to 2.5 hours.

Hike Difficulty: The hike difficulty for Riffelsee from Riffelalp was very low. There was some incline but the path was always very clear and quite flat. Suitable for children. From Riffelsee to Gornergrat the trail is quite steep but there are no sections with any real danger. From Gornergrat to Hohtalli (I’ll explain later in the blog), there was some exposure and rock scrambling.

Recommended option: Catch the Gornergratbahn and get off at Riffelalp. Then follow the Riffelseeweg along the edge of the mountain with 600m of incline over 4 kilometers to the Riffelsee and then continue up to Hotel Gornergrat Kulm.

MY EXPERIENCE HIKING TO GORNERGRAT VIA RIFFELSEE

I began the adventure in the town of Zermatt by heading to the Gornergratbahn, which is next to the main train station. I bought a ticket to Riffelalp and enjoyed the 20-minute ride up the steep hill before jumping out. Everyone else on board seemed to stay on and headed onwards to Gornergrat. That made me feel better about not hiking all the way up from Zermatt.

The signs you will find at the train station look like the following. Follow the signs to Riffelalp, a small village where you pass through. There is a lodge here for $500 a night if you have the cash to splash. 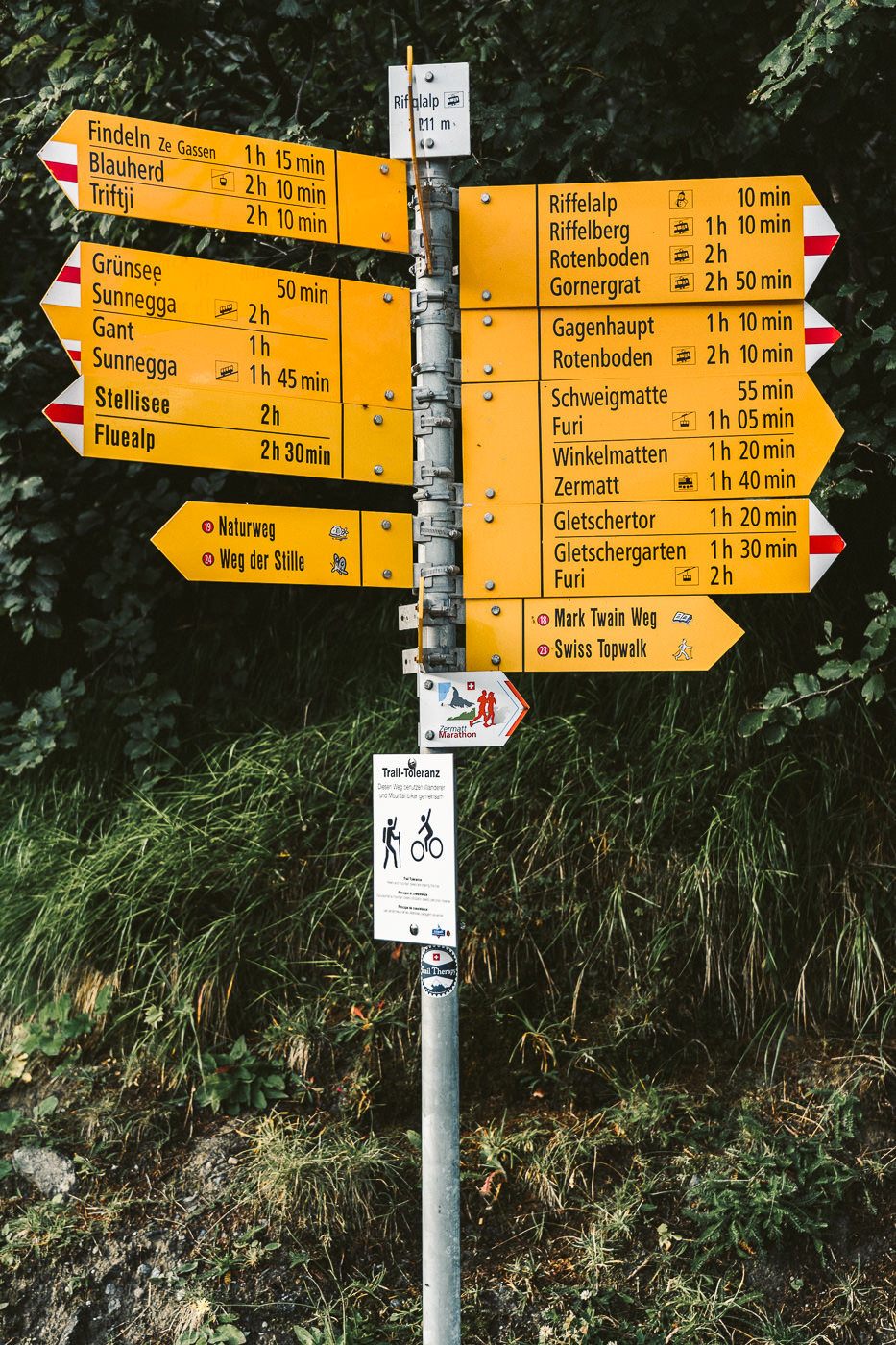 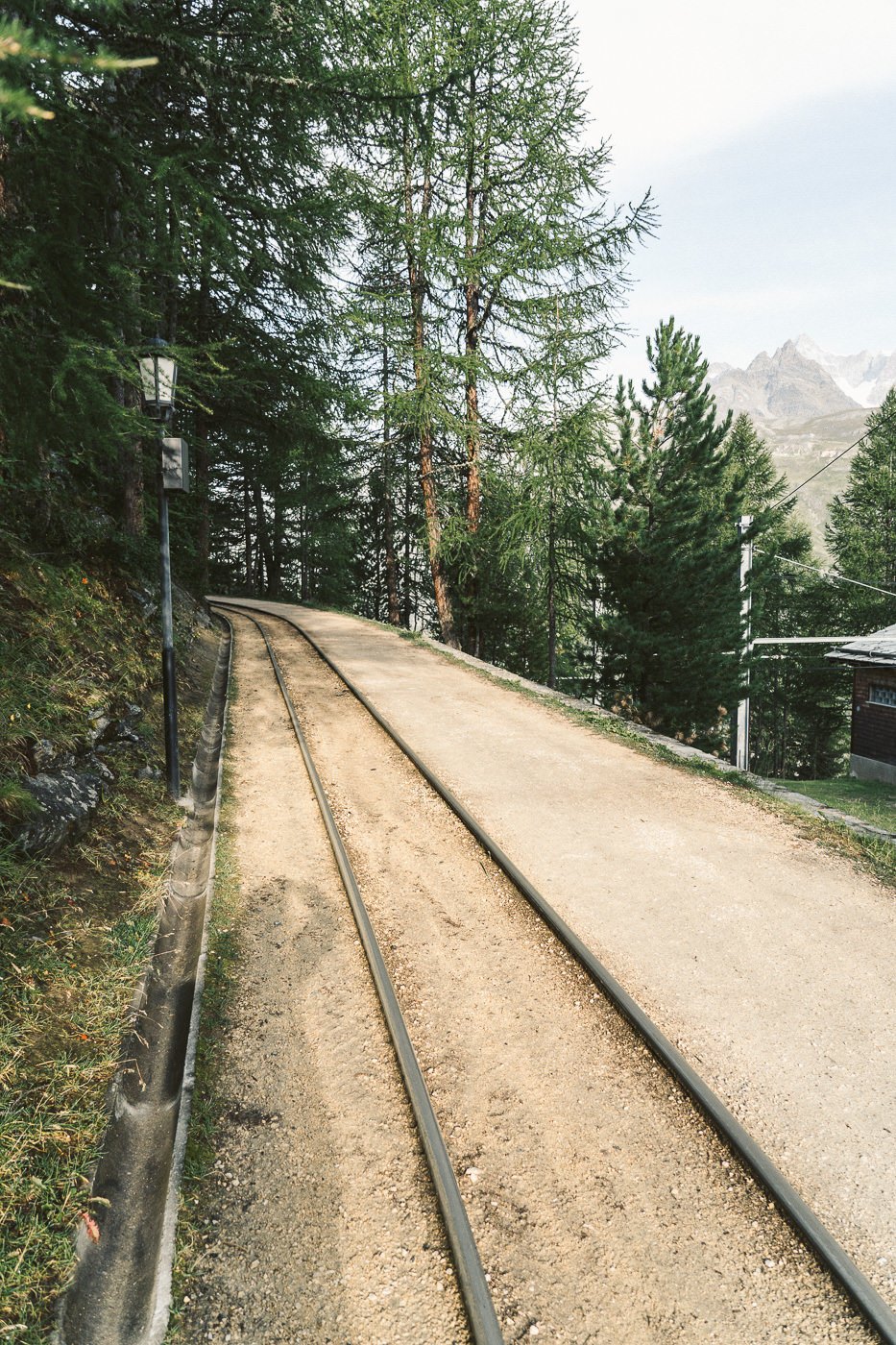 The views of the Matterhorn are constant throughout this hiking route to Gornergrat and I spotted the peak through the trees before I even reached Riffelalp. It’s best to do this hike on a cleary day so that you get to enjoy the Matterhorn, which is the main focus of the trail even though the Matterhorn is on the other side of Zermatt. 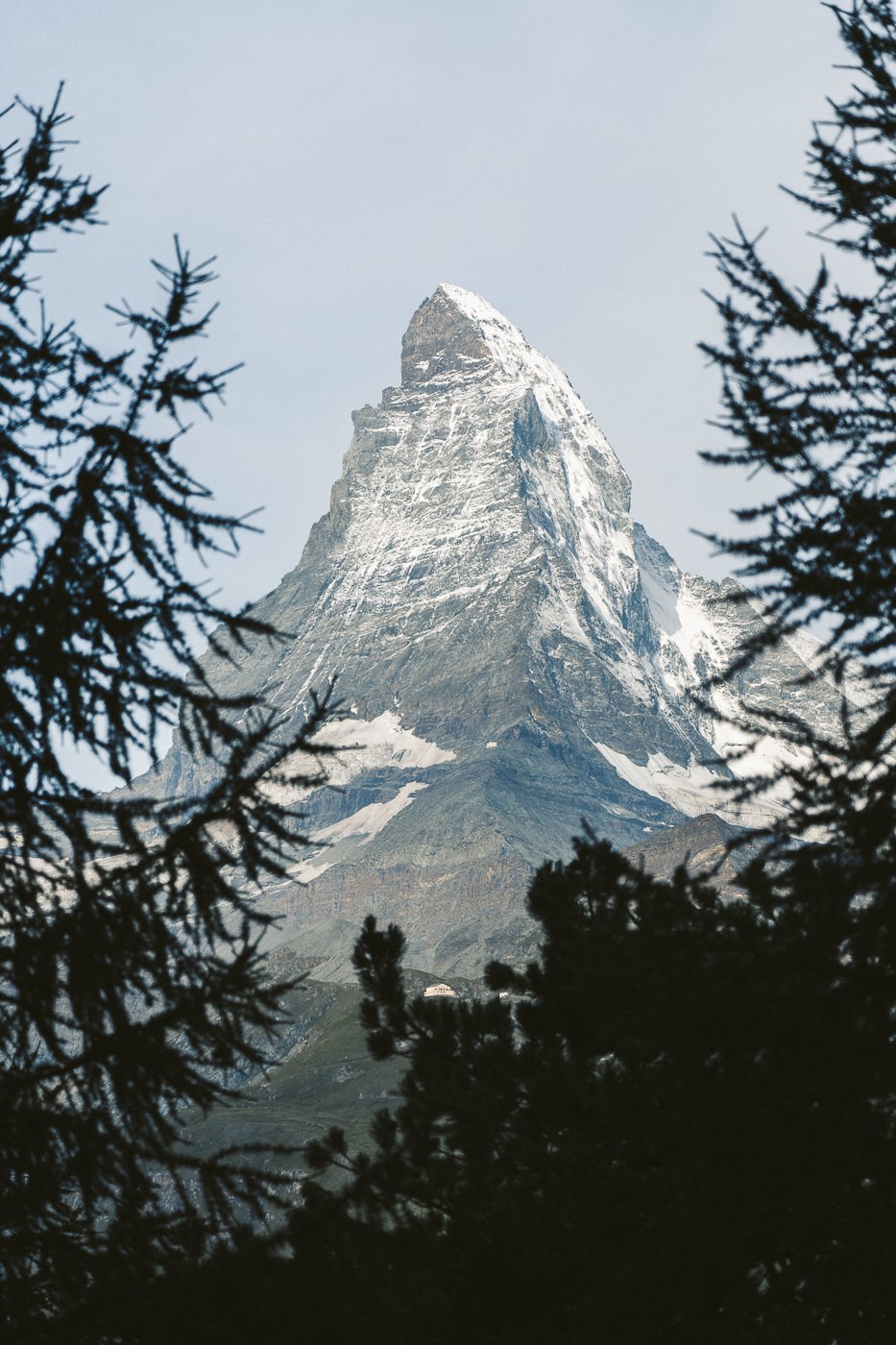 Once you get through Riffelalp you will come across another set of signs. Continue on the edge of the mountain and don’t turn left at the signs. At this point follow the Mark Twain Weg sign 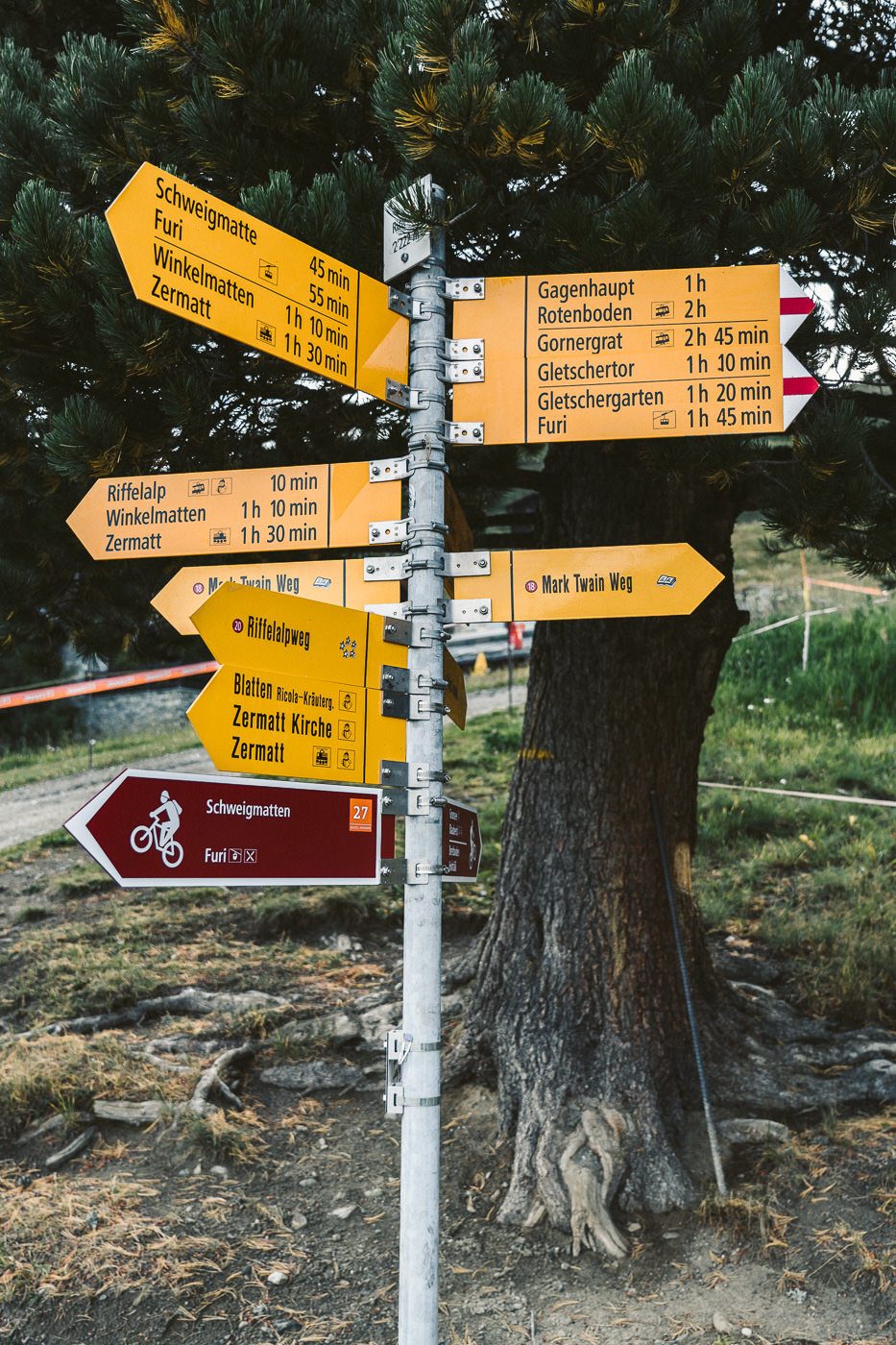 The Matterhorn kept following me throughout the hike and I kept photographing it. The trail wound up the hill with some solid incline at this point as Matterhorn remained on the right-hand side. The early morning light and views down into Zermatt made this part of the trail the most spectacular. I even spotted a little Marmot grabbing some morning sun. 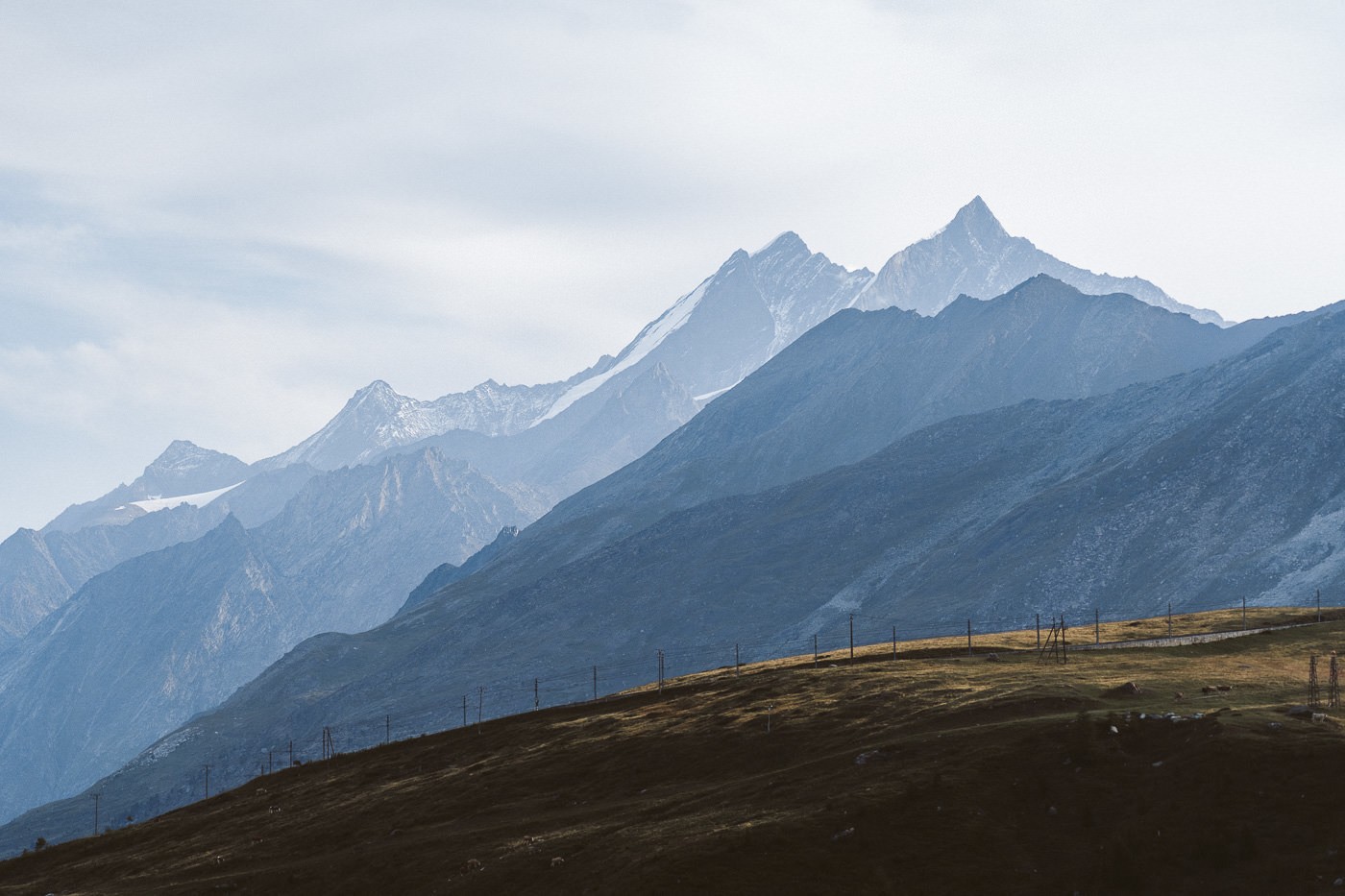 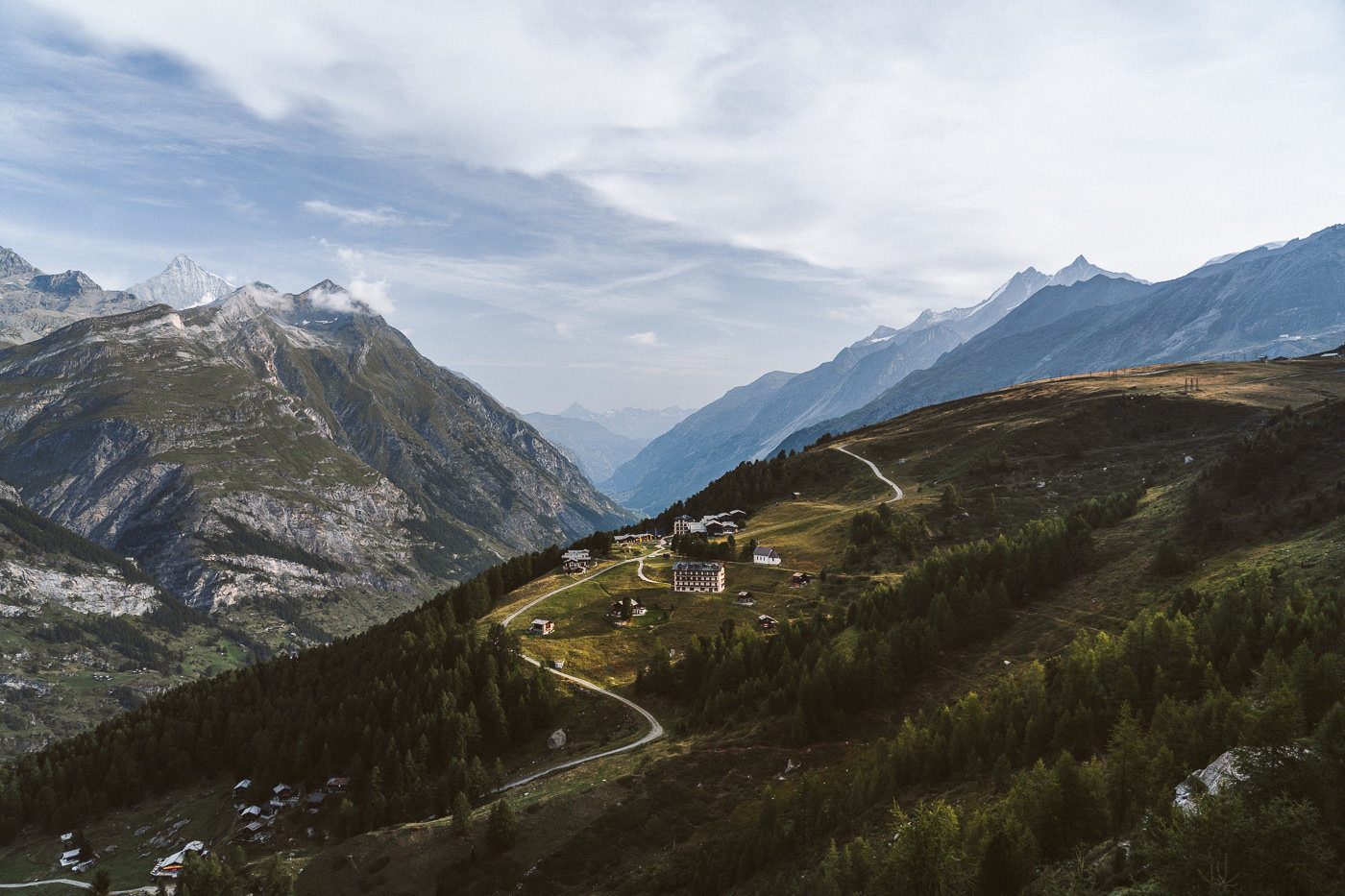 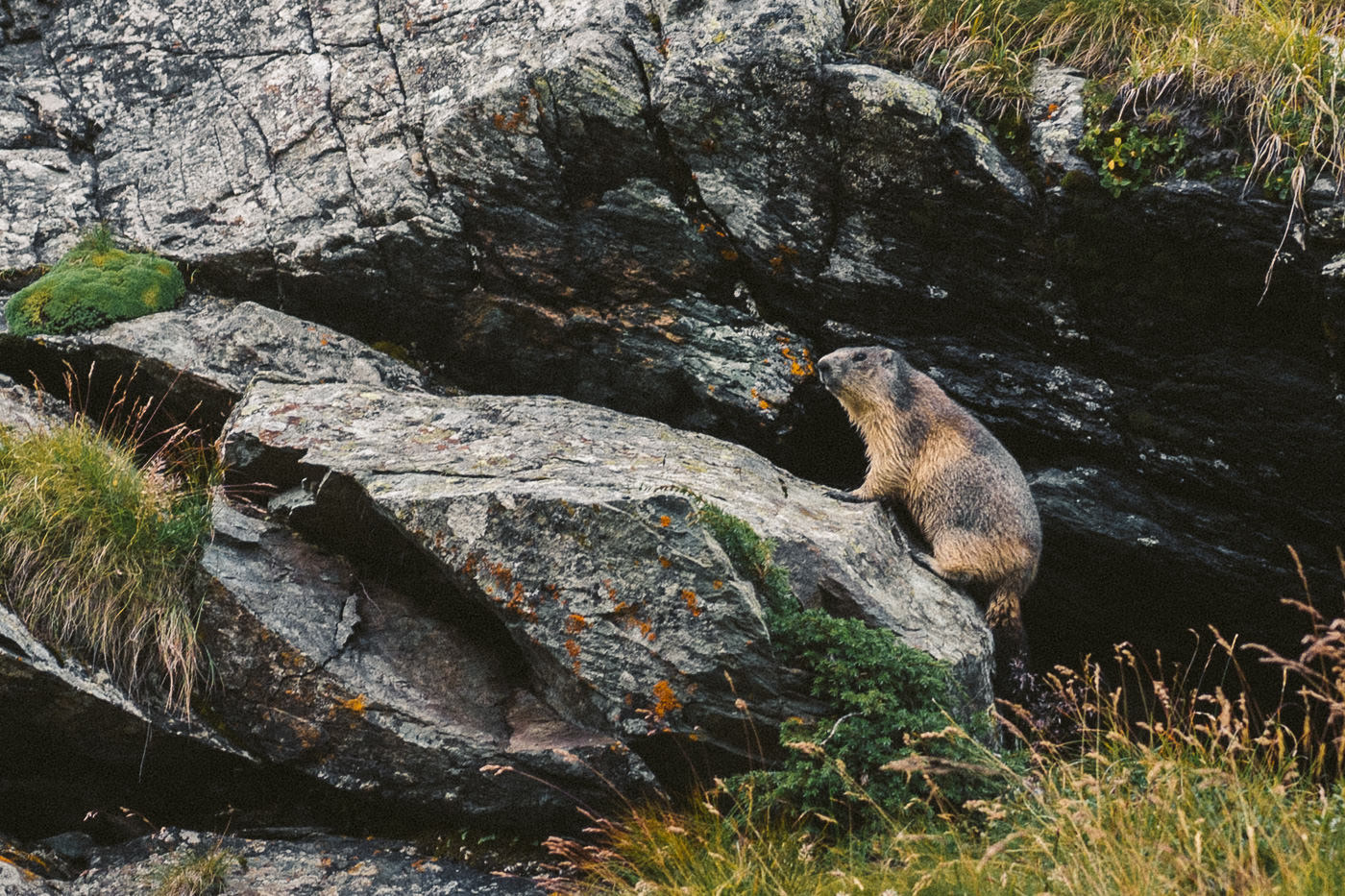 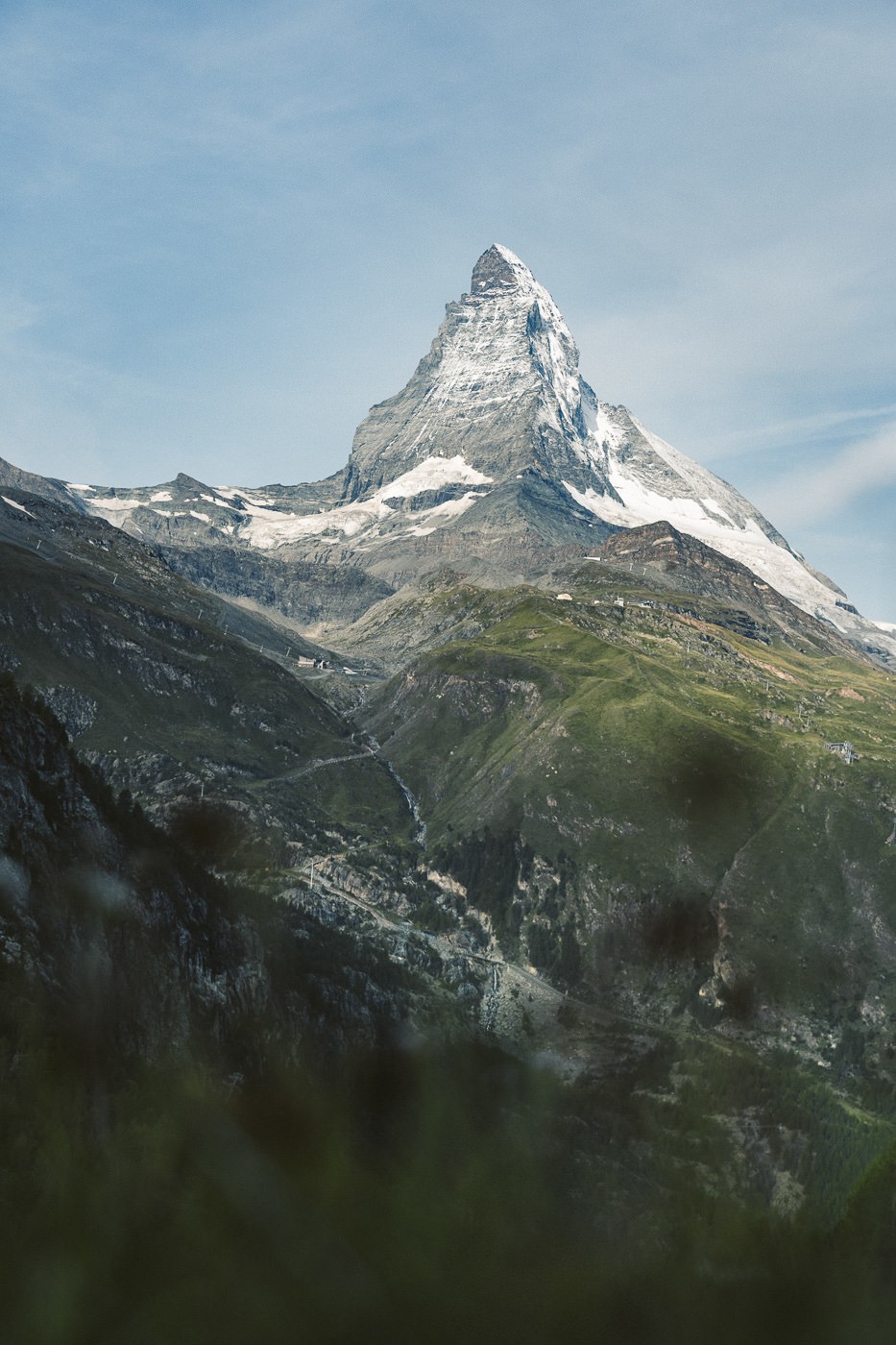 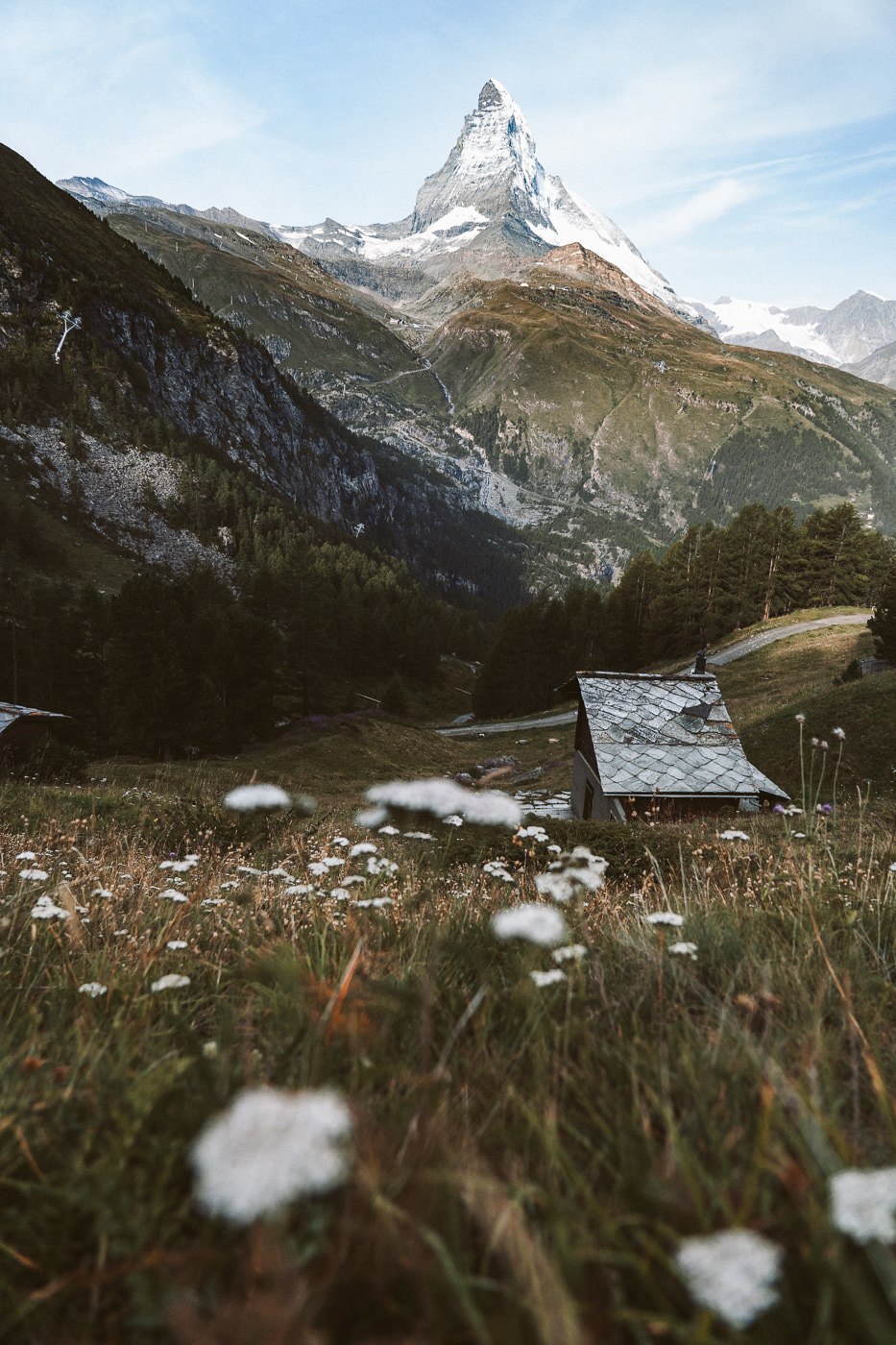 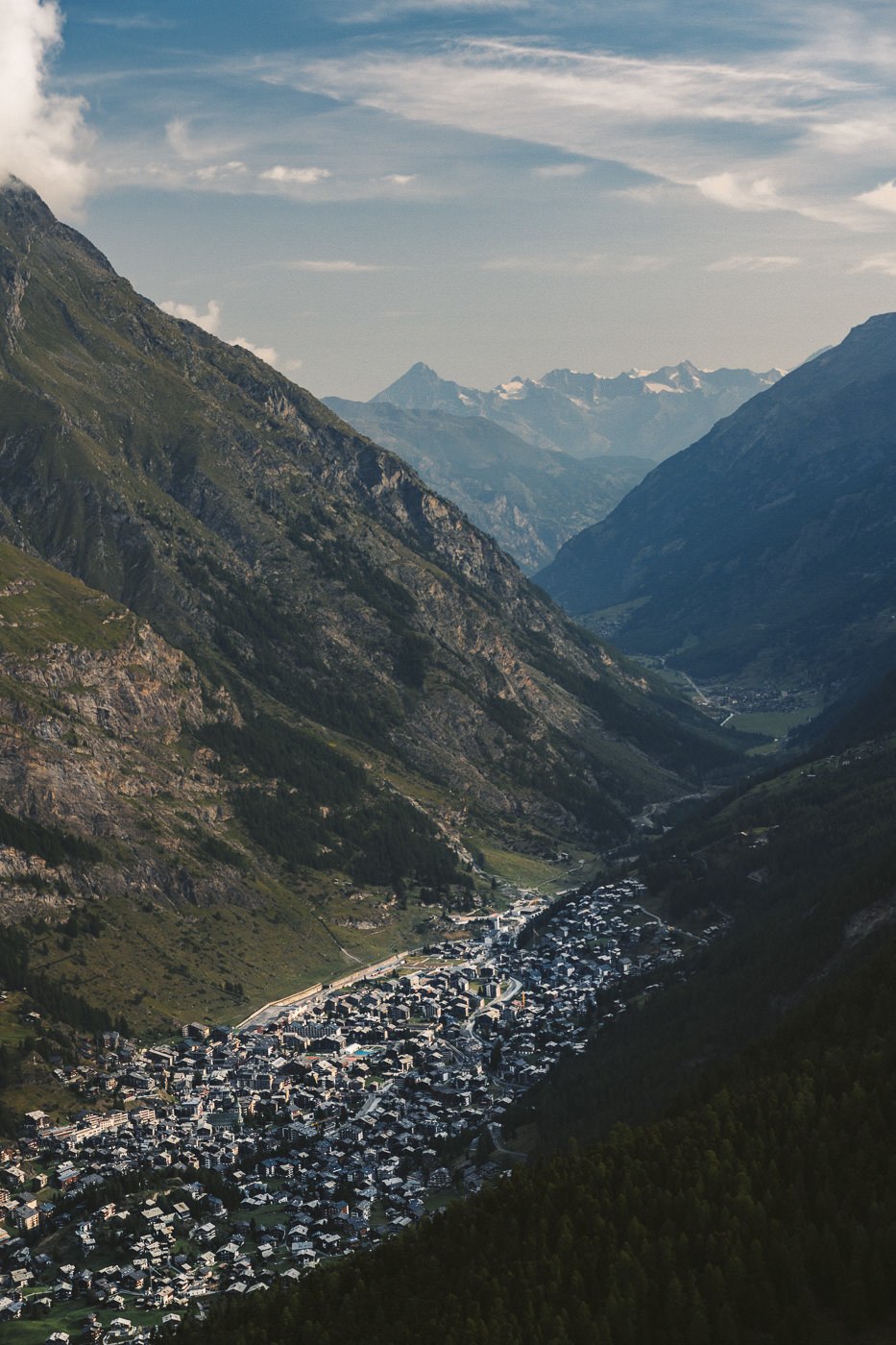 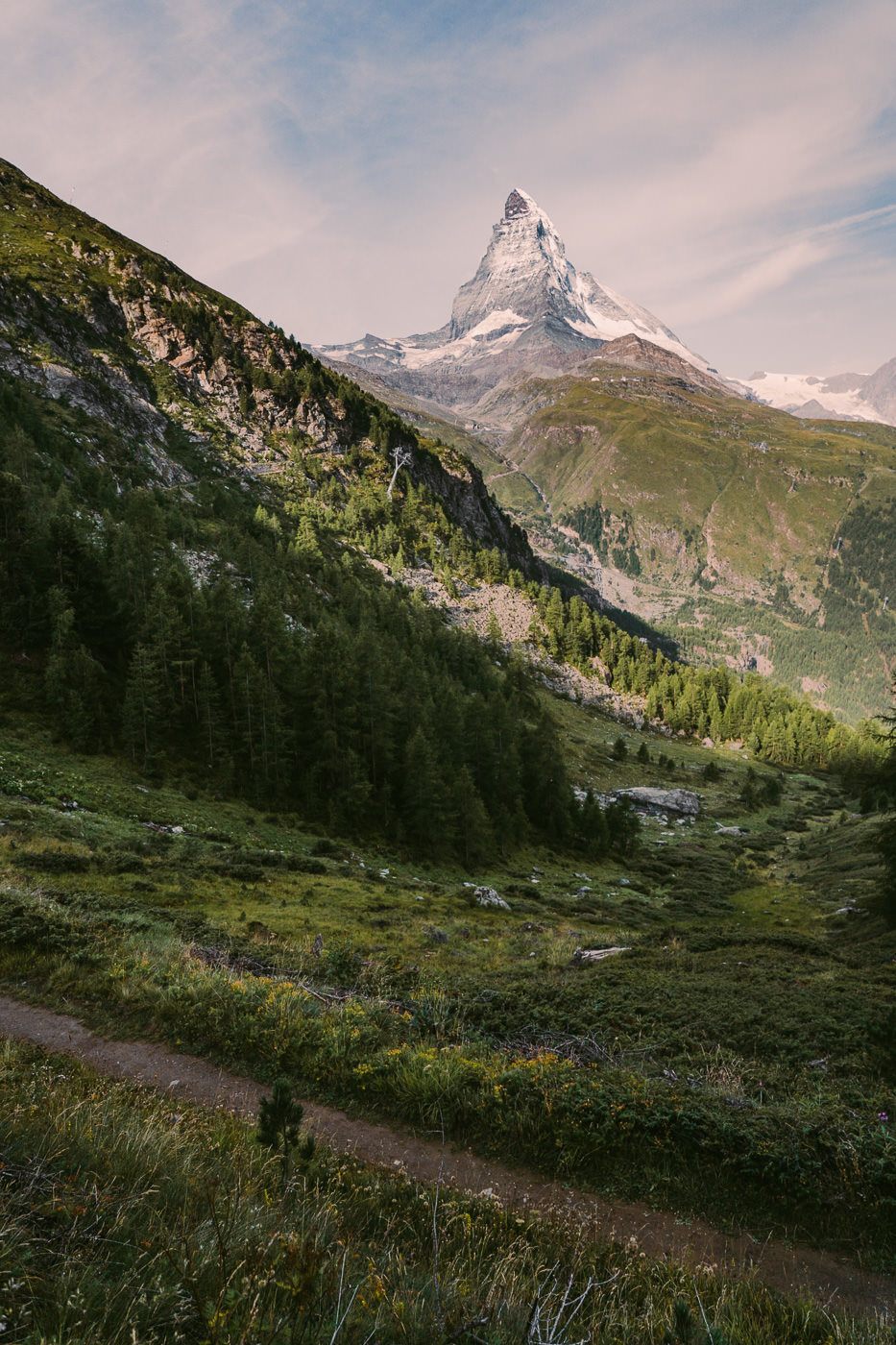 The path now takes a turn at the following sign as you head left up the hill. At this stage, you are more than halfway to Riffelsee. Follow the red and white trail markers to the left. At this part of the tail, I still hadn’t seen anyone else at all. It was just me, myself and the Matterhorn. 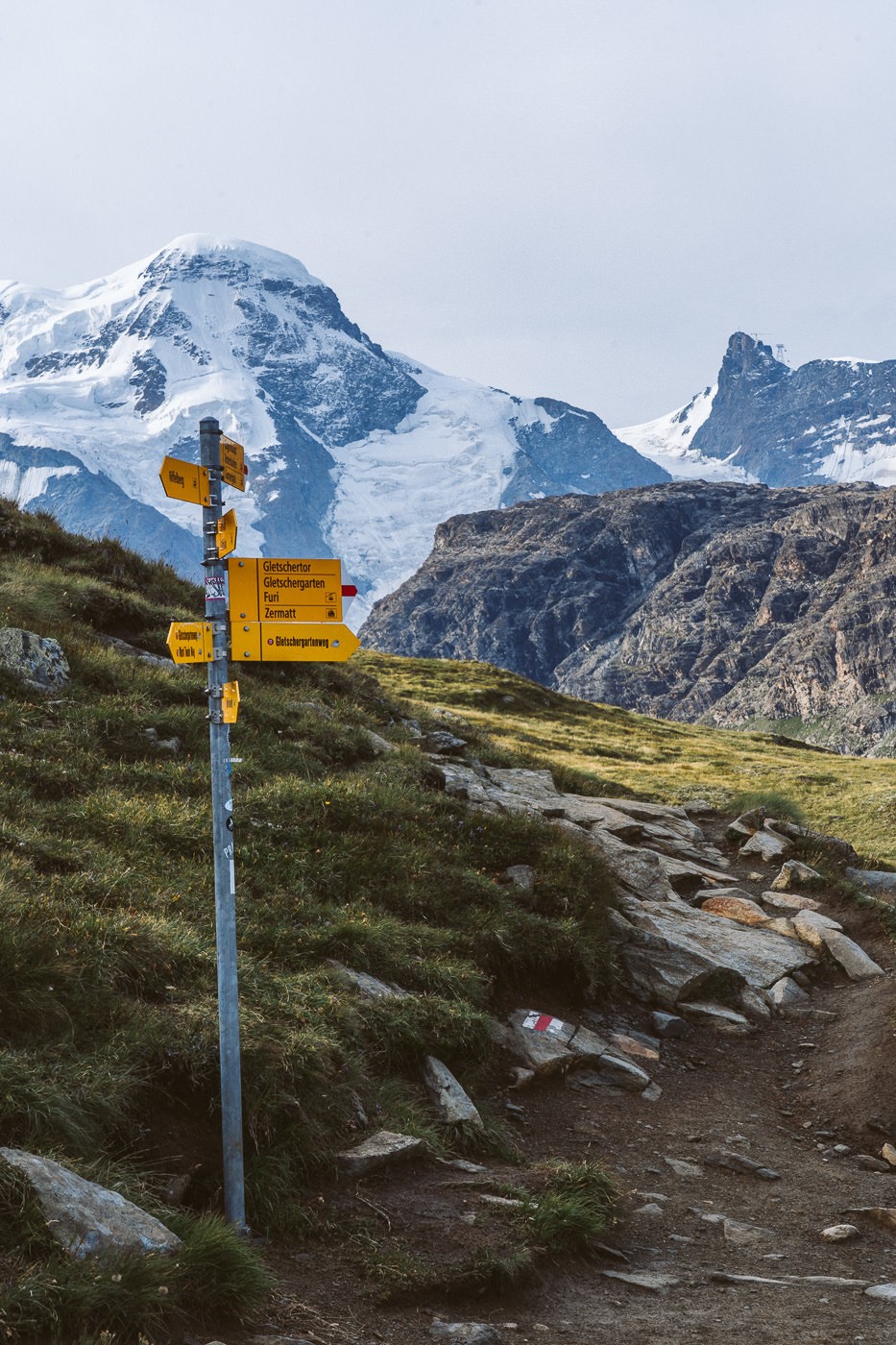 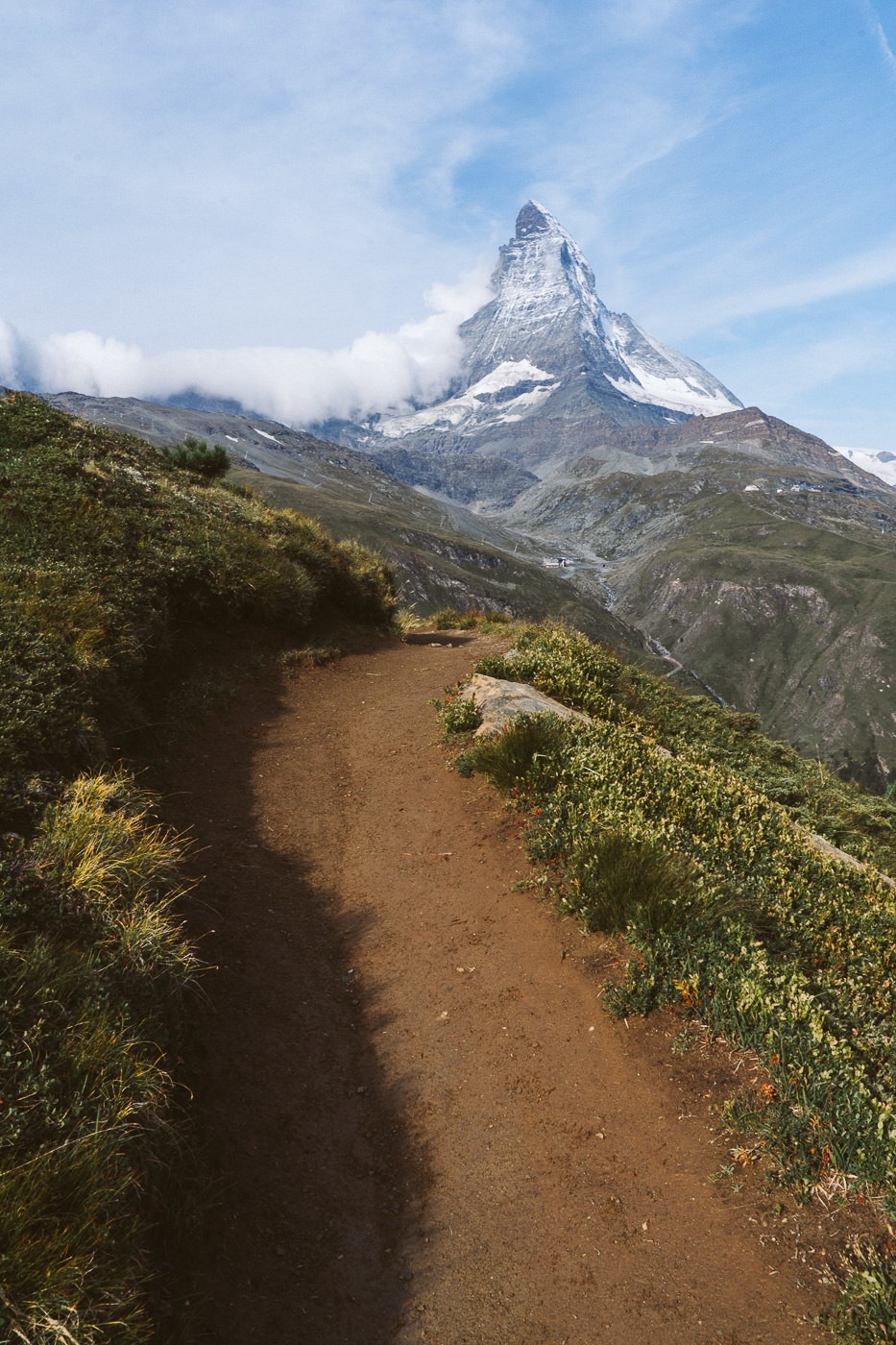 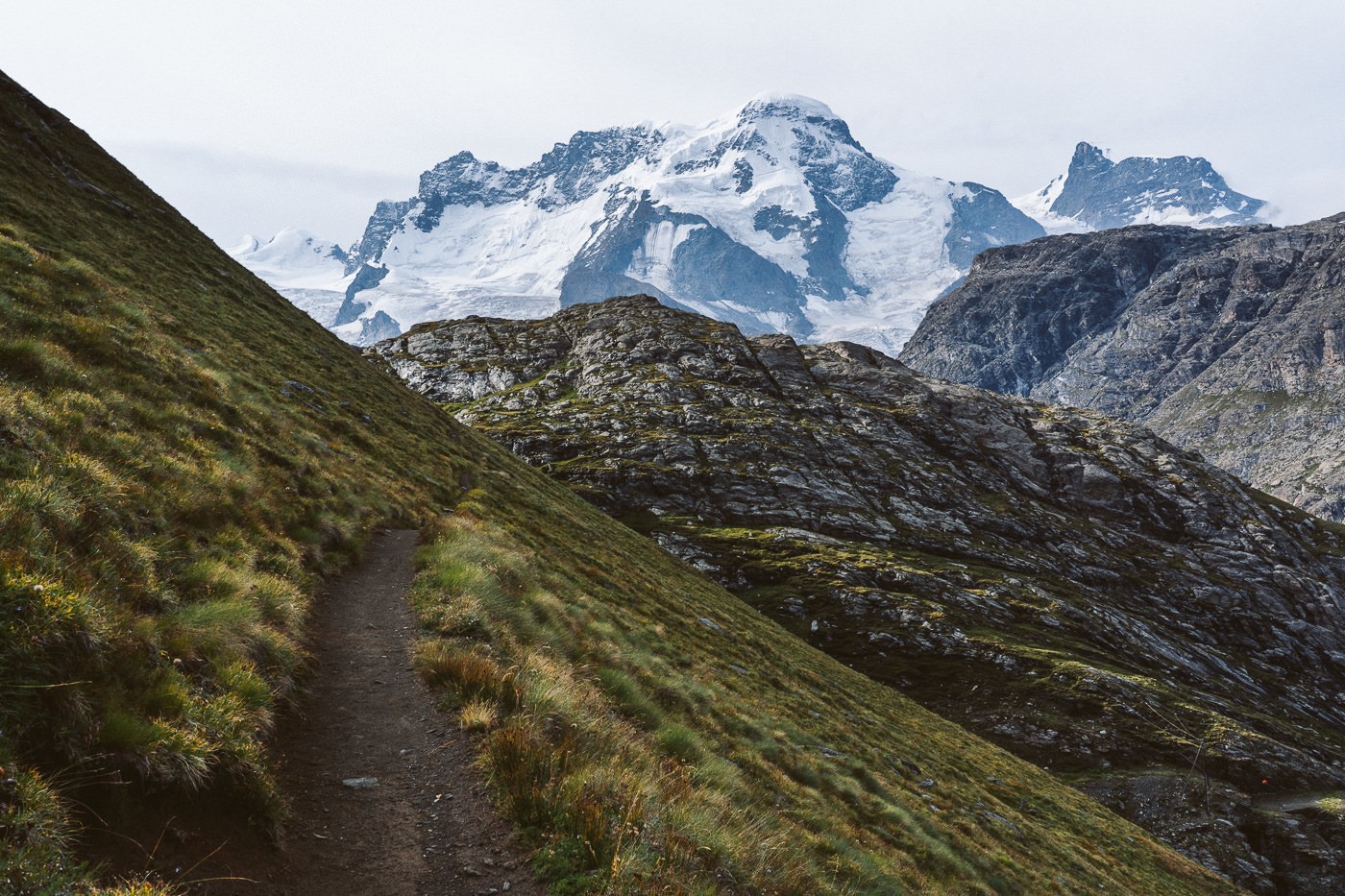 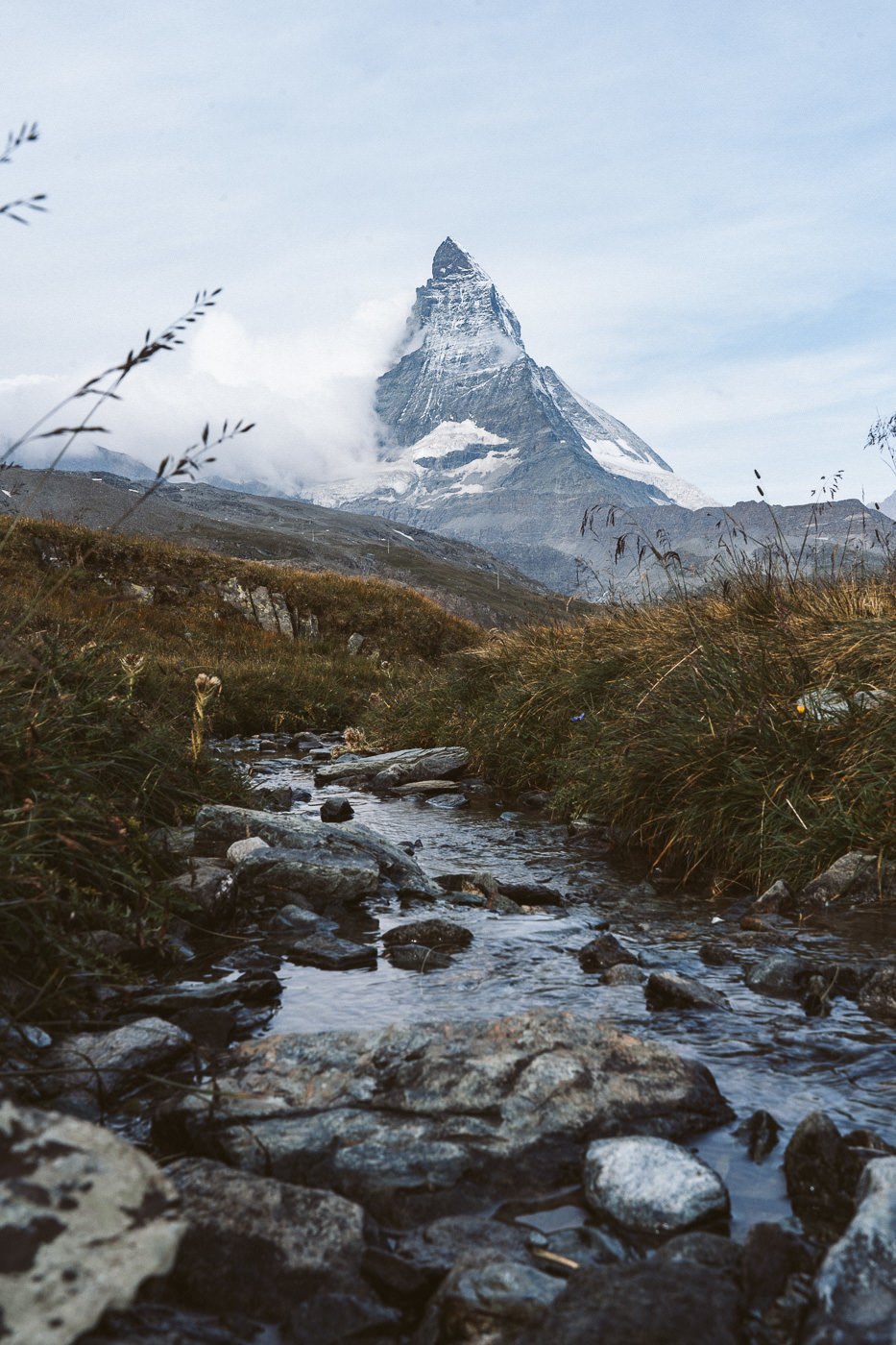 Before you reach the official Riffelsee, there is a small lake that is even better for reflections. Most of the tourists didn’t get down to that lake and only went to the one closest to Gornergrat but I found this first lake the best for finding a nice reflection fo the Matterhorn and much less crowded. Just a couple of us hun around the lake admiring the view. 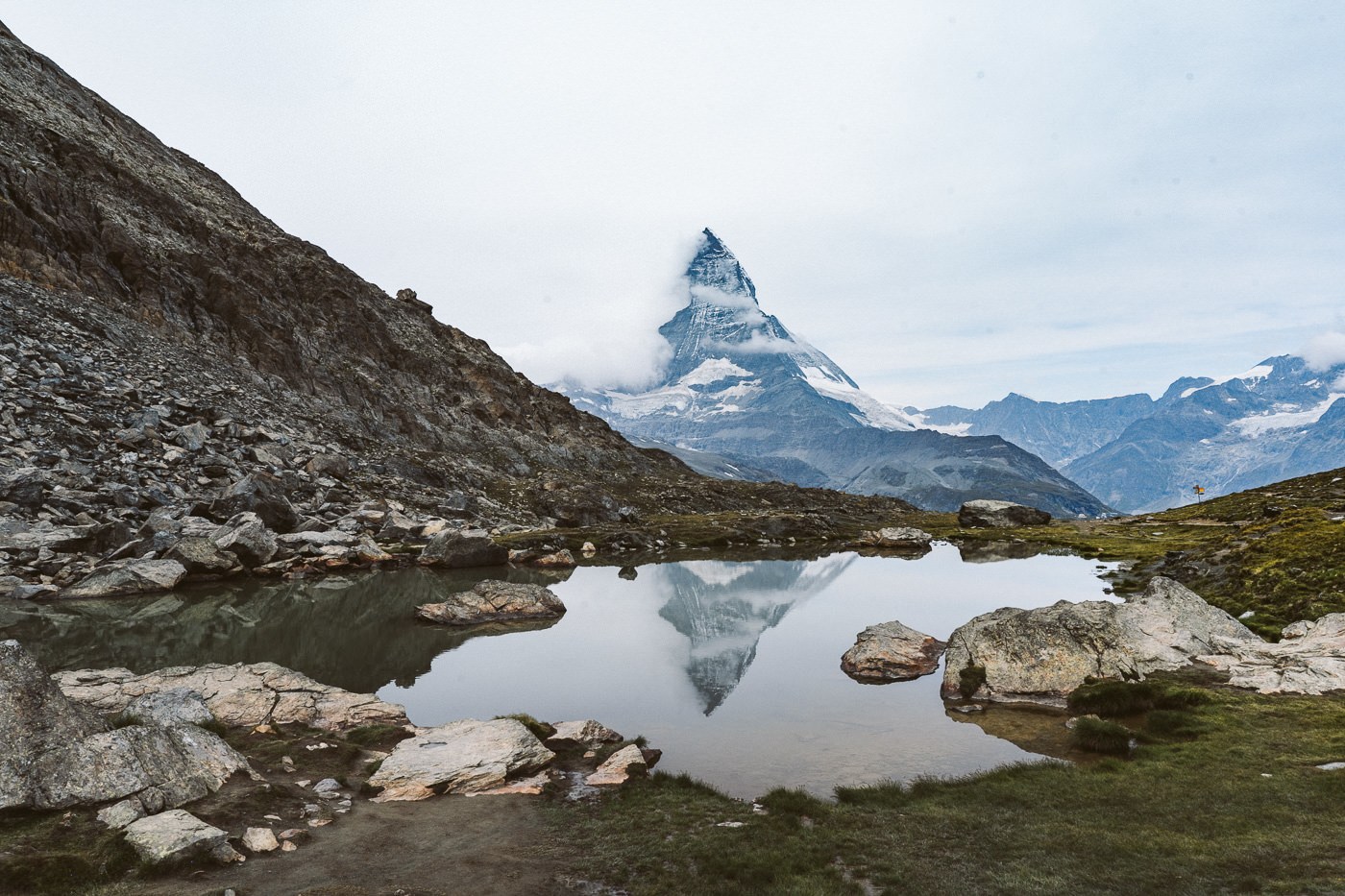 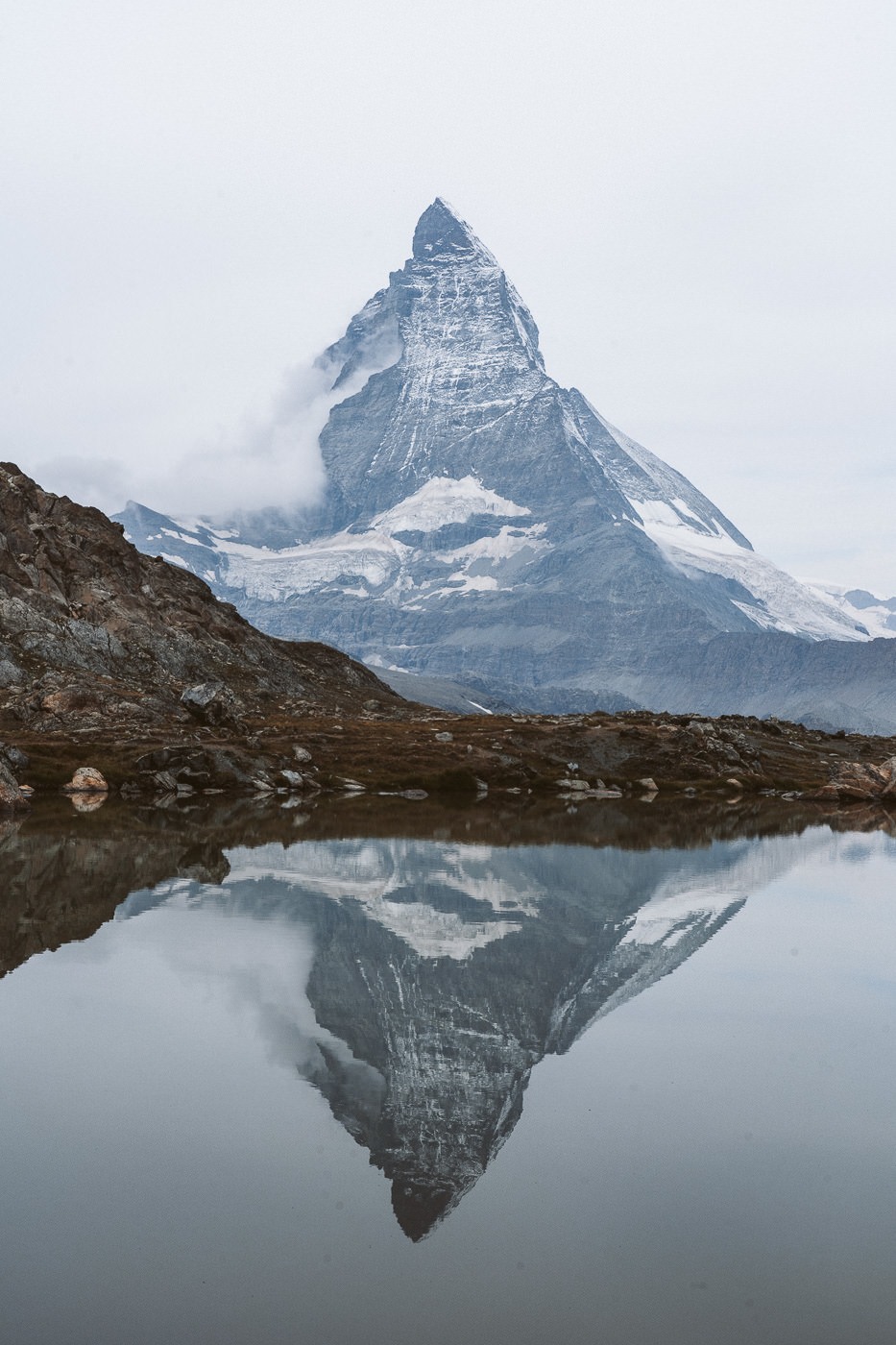 Continue hiking up for another 10-minutes and you will reach the much larger, Riffelsee Lake. Hike up to the far side of the lake and look back for the best reflections of the Matterhorn.

There is a train station just above this lake and Kulm Hotel Gornergrat is a bit further again so expect a lot of tourists. It was actually pretty cute to watch as a group of Chinese tourists all walked up together to the viewpoint and at a certain point, one-by-one, they entered the zone where the reflection appeared and they all loved it ooohing and aaahing. It’s always cool to watch other people enjoying the highlight of their day or the trip whether they are a touristy tourist or a crazy adventurer. 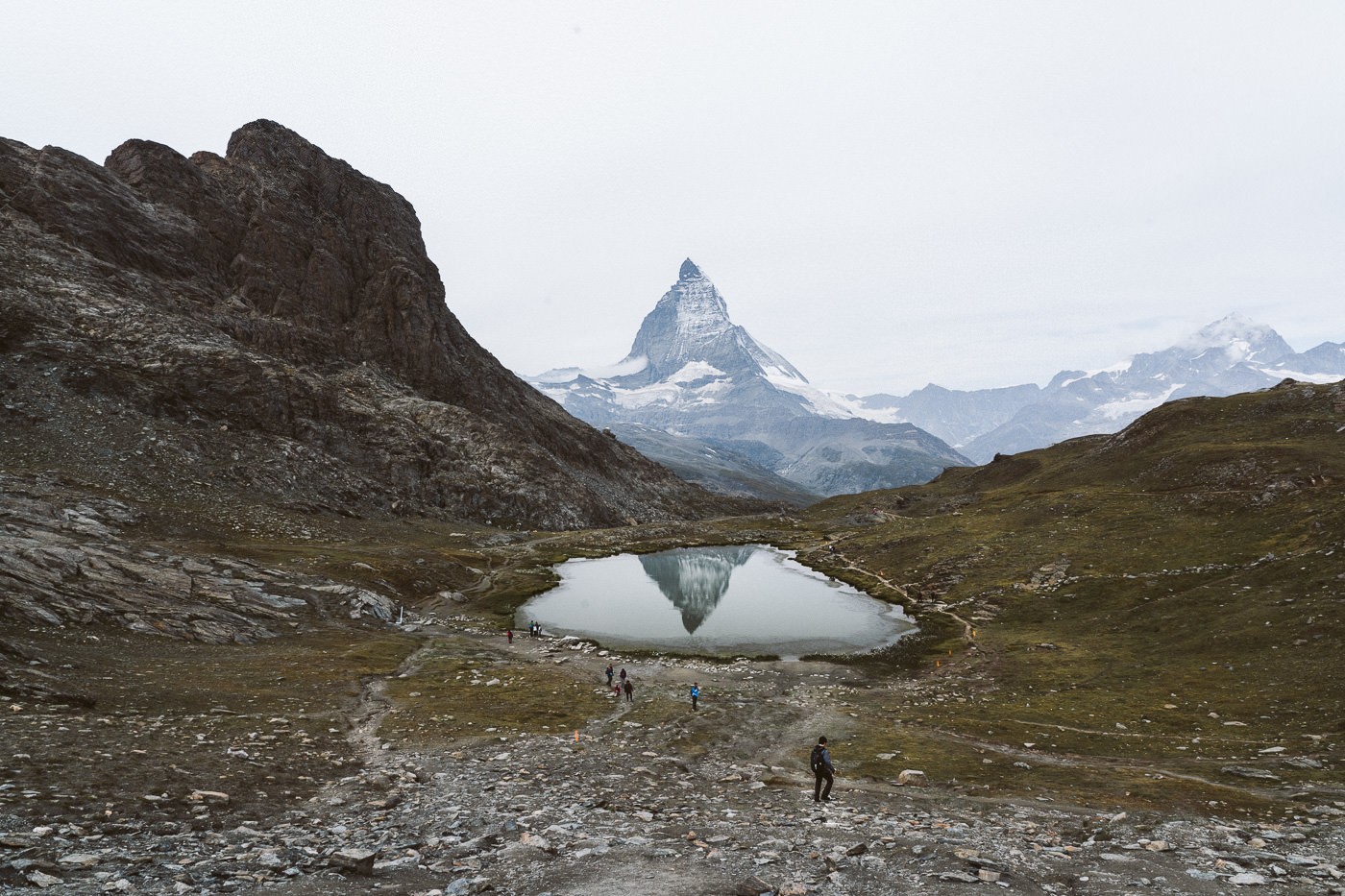 The reflection lakes are now behind you and there are only about 20-30 minutes of hiking left before you can have a bit of a chill and something to eat at the Gornergrat summit. The trail to the summit already starts to give you some great views of the Gorngergletscher and in the distance, you can even see the Monte Rosa mountain hut. 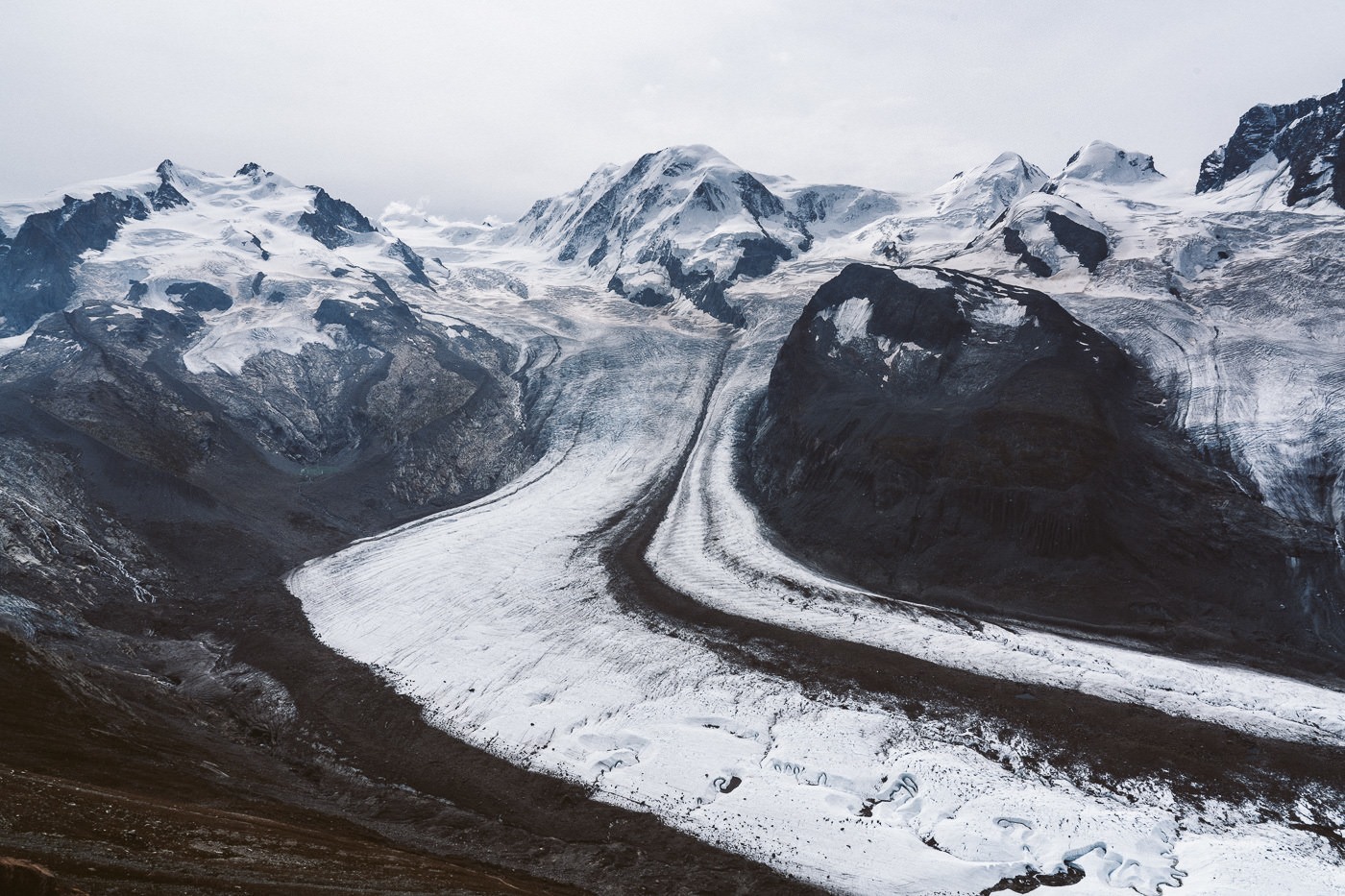 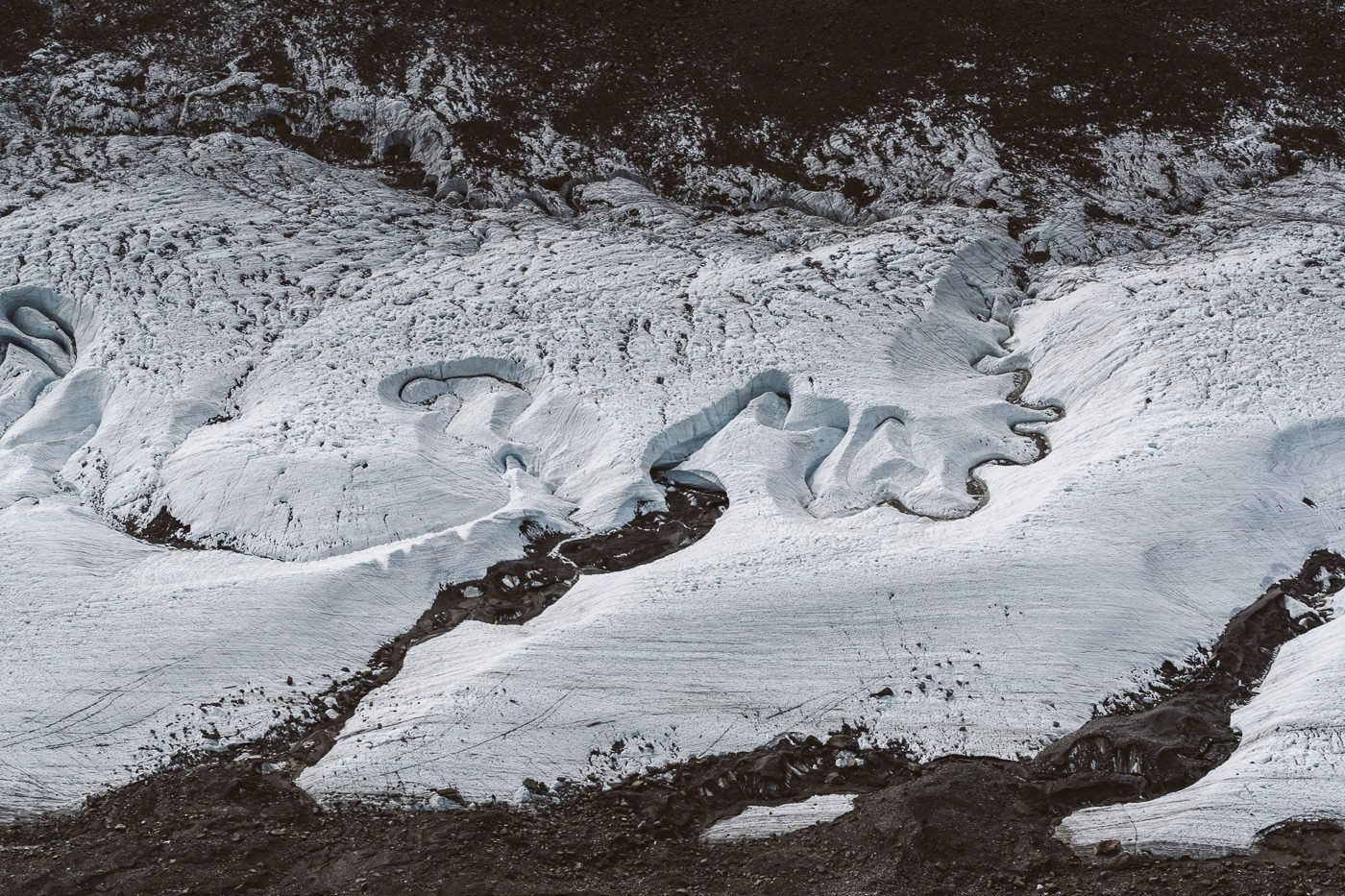 I arrived at Hotel Kulm Gornergrat and it was very, very busy. There were hundreds of people there and it was a bit overwhelming so I just kept going all the way to the viewpoint above the hotel. Here you can get a great view of the entire region but even that was still very crowded. That’s what happens when you build a train to a summit, for better or worse.

At this point, I decided I would just keep on hiking along the ridge to Hohtalli, a different mountain hut a few kilometers away. The trail now became quite a bit more intensive. I still didn’t find it very dangerous but it was now more rock than trail and there were a few moments of exposure. The views only got better as I continued. Matterhorn lurked in the background as it had done all day. 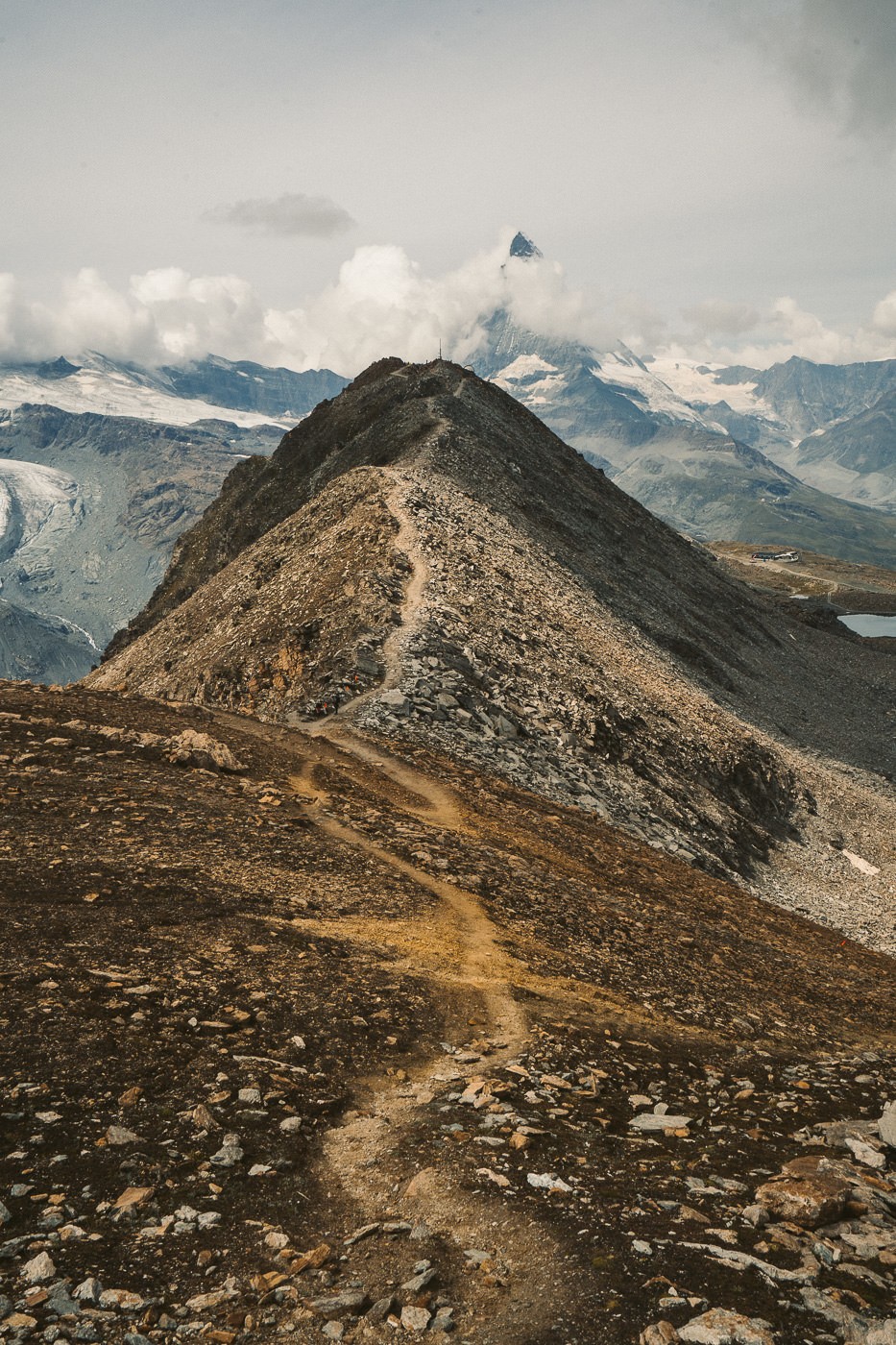 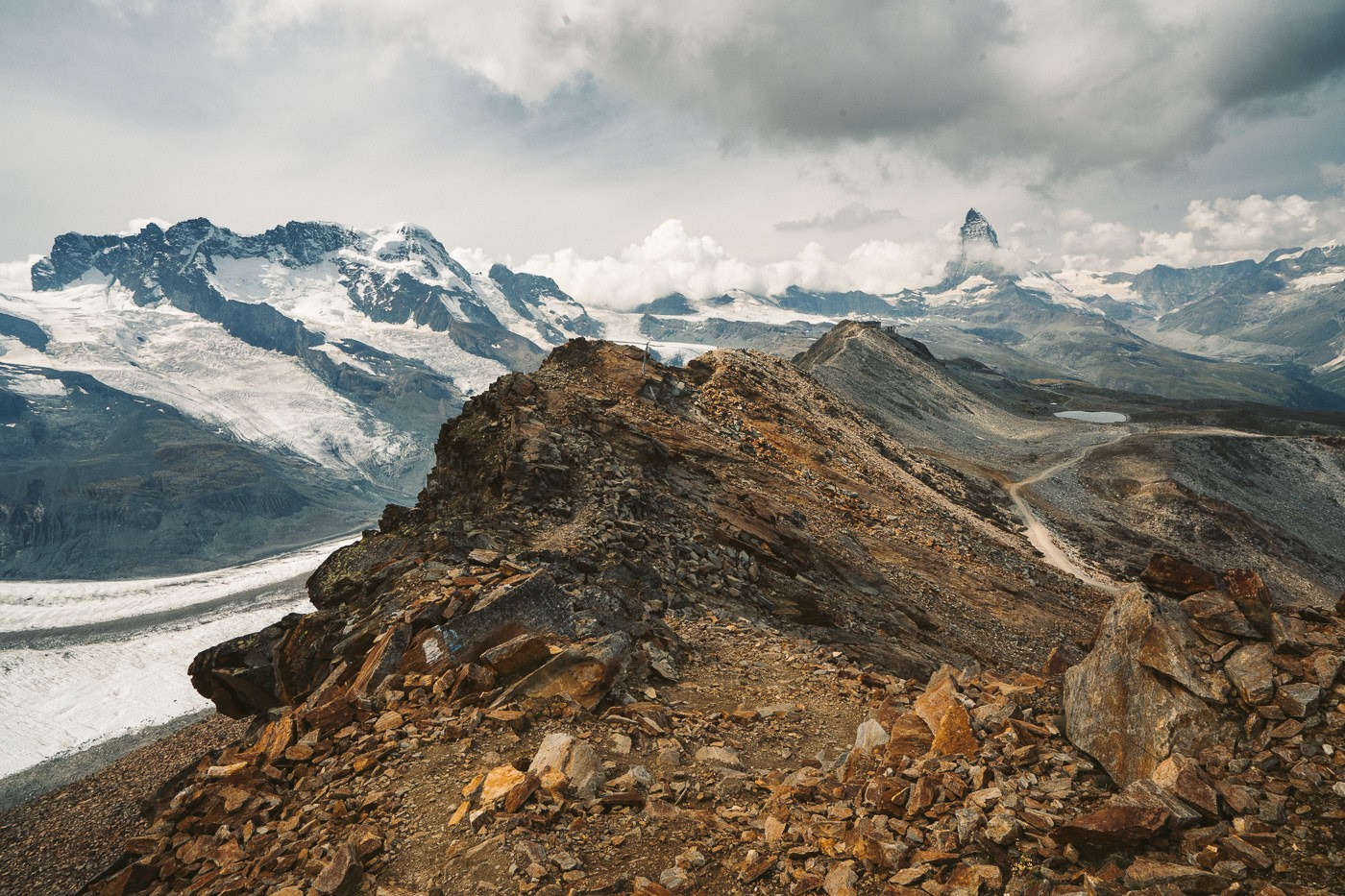 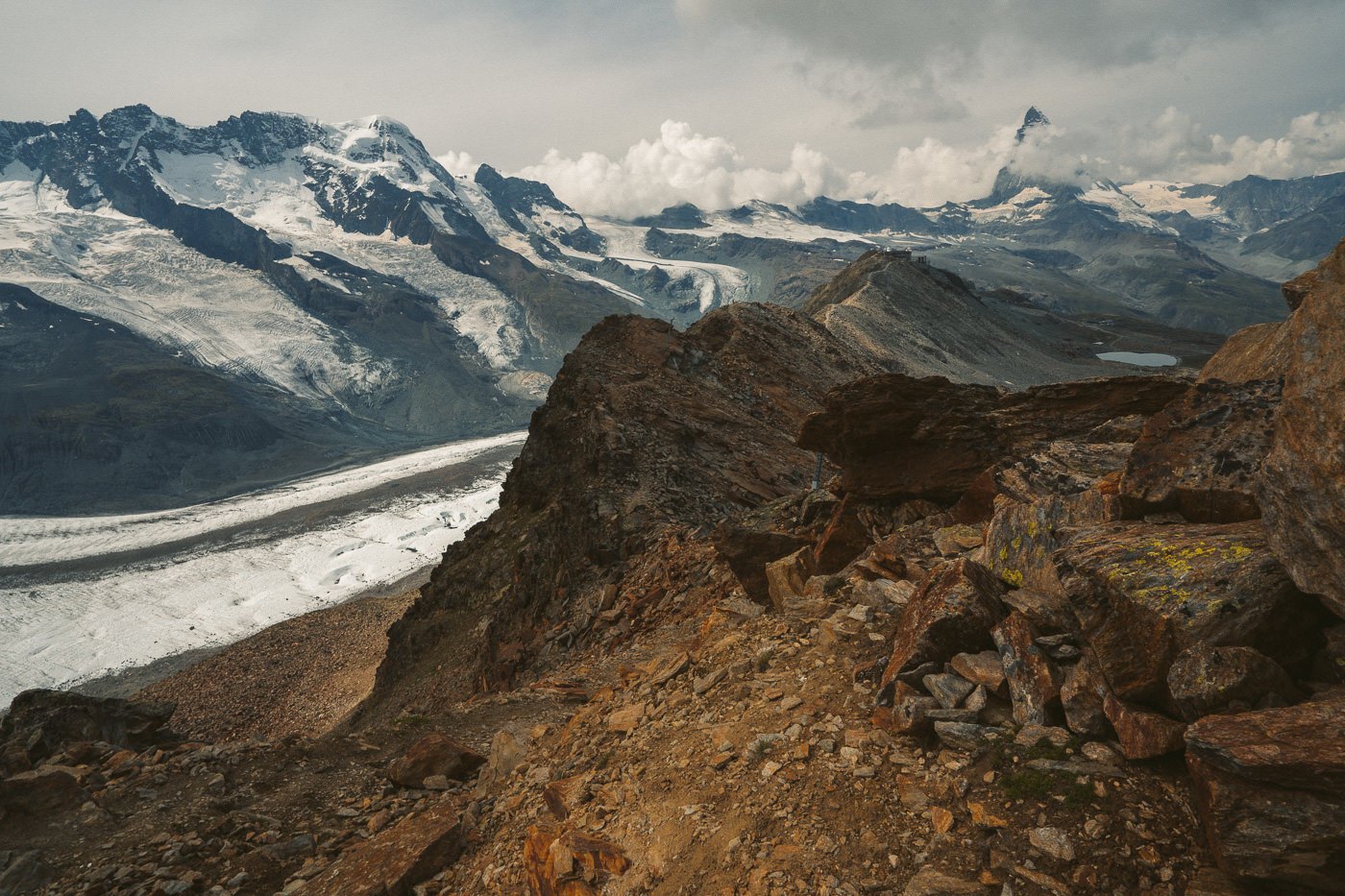 I arrived at Hohtalli hoping for a coffee but it was an apparent ghost town. No-one there at all. I took a seat and enjoyed a pre-made cheese sandwich and wandered around the hut and weighed up my decisions. The trail became an alpine-route from here if I continued along the ridge. Without a partner or having researched it first, I decided not to head out on that unknown ride by myself and began the hike down to Zermatt. I took one self-portrait in the glass as a Hohtalli ghost town memory. 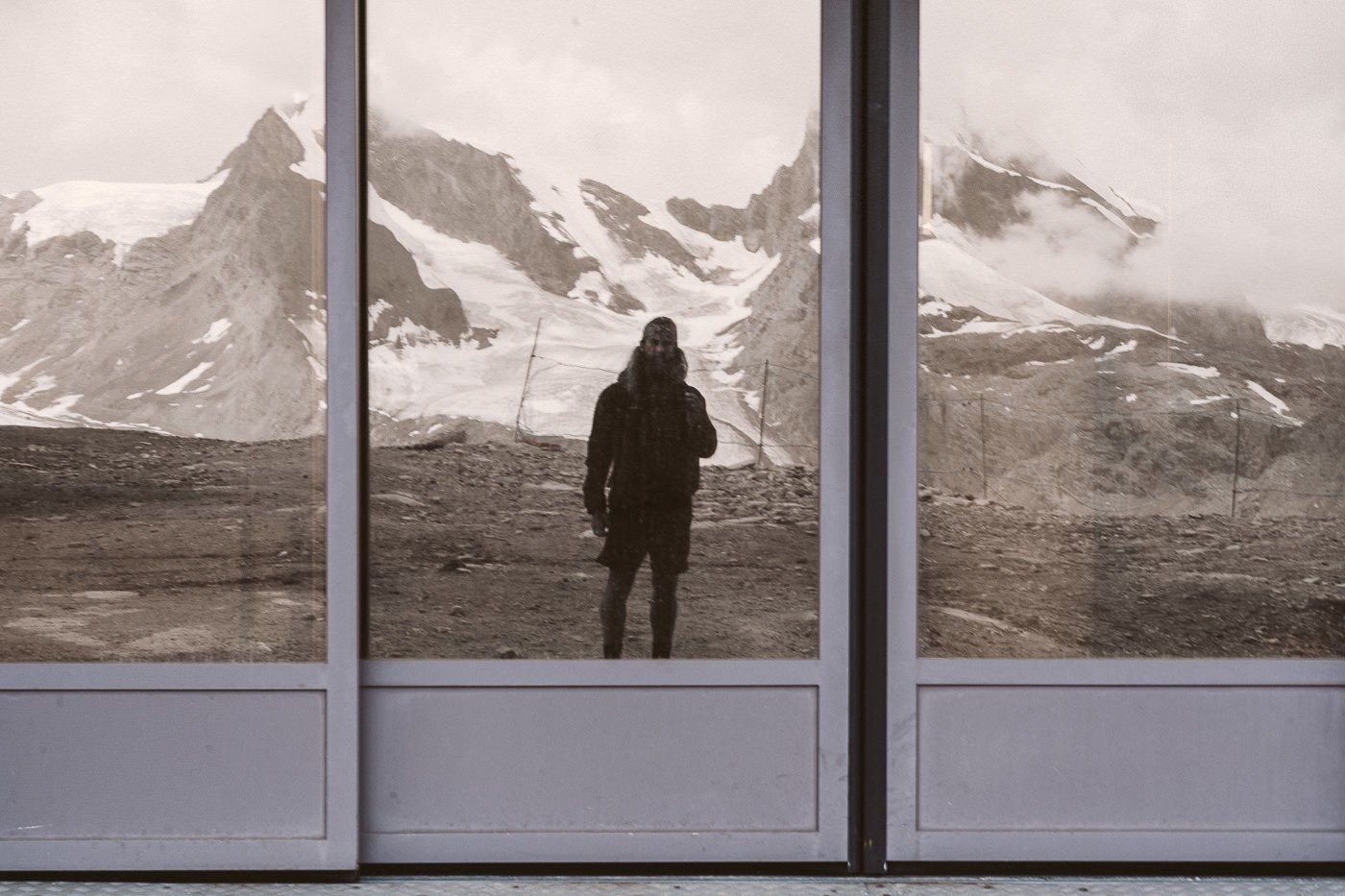 Along the way on the route down to Zermatt, I came across a herd of mountain goats and followed them down the ridge for a while as they eluded me for the most part. I did manage to snap one photo of them but without a good zoom lens, it is hard to get close enough. 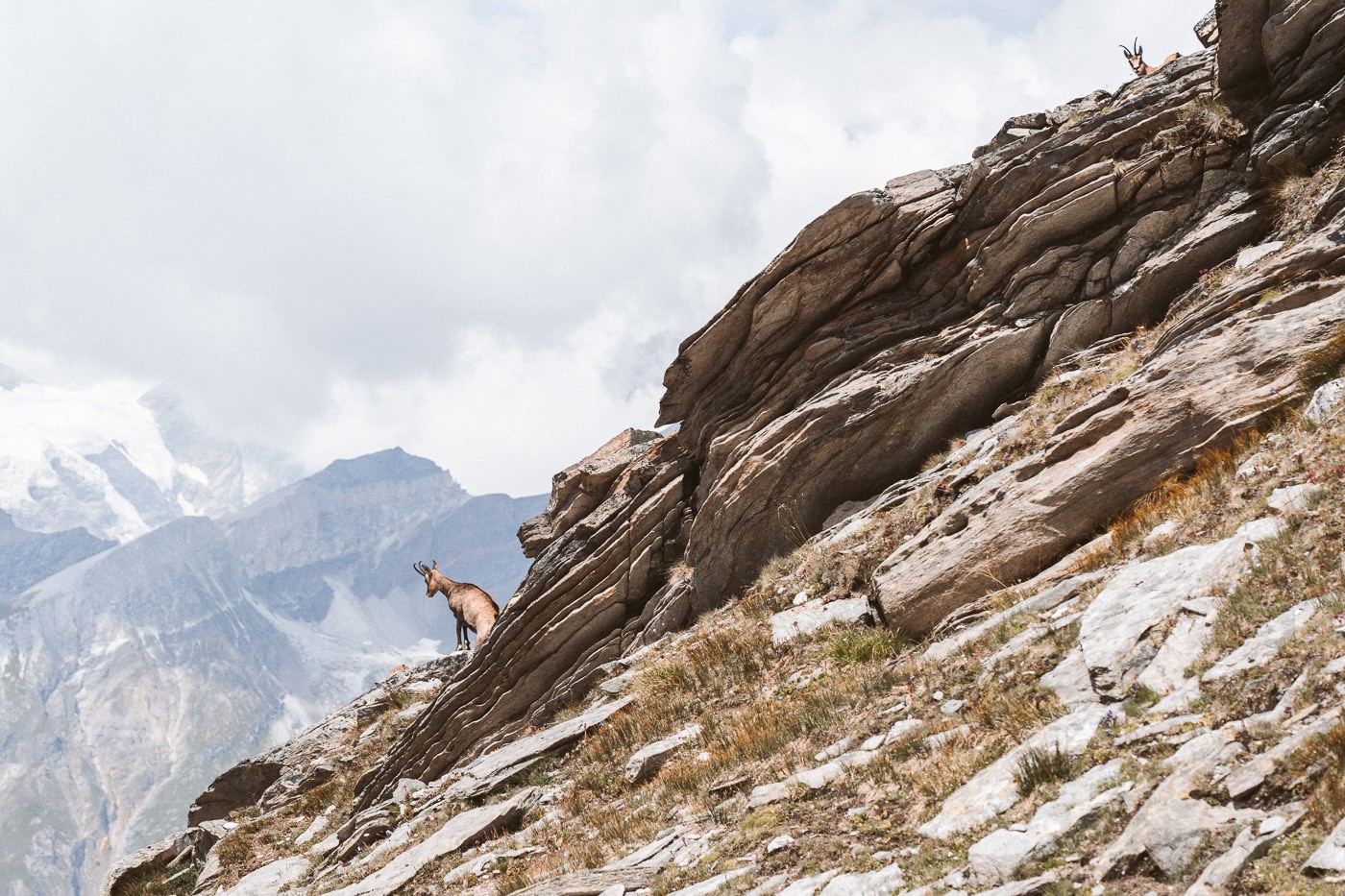 I didn’t plan to go all the way down to Zermatt and thought I would bump into a cable car or train along the way but the route I took must’ve missed them all and at some point, I just decided I only had 4-5 kilometers left so I’d just jog down to Zermatt Town. I ended up doing 20 kilometers over the course of 5 hours.

Thanks for this page, Jackson. I was looking for info on hikes from Riffelalp to Gornergrat and came across your page. Mark Twain route in the morning was definitely picturesque and highly recommended.

For those who are looking for some timings, as an idea... I did the hike today at an easy pace (note: I am also an Aussie):

Riffelalp to Gornergrat via Mark Twain route + Riffelsee with lots of picture and video stops = 2h 50 mins (including 15 min wait at Riffelsee hillside for the clouds to clear around Matterhorn only to have my phone battery die...tragic)

I really enjoyed the walk today. It was very doable in one day with an hour and half lunch break at Kulm Gornergrat to soak up the atmosphere and the scenery while warming up and rest...

I hope others wanting to do this route find this info helpful.

Can I hike down from Gornergrat to Riffelalp?

Wow! you must be very fit. Hahaha! I'm going to Zermatt this weekend and I'll try to follow your trail except from the Hohtalli part. Great blog, very informative. Keep posting!

Amazing blog! Would you by any chance have the gpx of this trail? Thank you so much for sharing your hikes with the world!

Thanks for the amazing blog and info. May I know what month you did this hike?