Caramoan Island is a pristine region in the Philippines, which could be likened to El Nido on Palawan. We traveled to Caramoan from Legazpi, and were blown away by the beautiful islands and cliffs. Staying at Tugawe Cove Resort, we set off to explore the area with a day of Caramoan Island hopping! In this blog post, I will show you the how to get to Caramoan Island and detail the islands we visited during our Caramoan Island Hopping.

Similar to El Nido and Coron, a full day of island hopping will range from $15-20 depending on lunches, inclusions and the fees of the islands you visit.

Caramoan Island is part of Bicol, and is east of Manila. In fact, it is only a 2-hour total journey from Manila to Caramoan by flight and boat, which is pretty amazing. In less than two hours you can leave the hustle of Makati in Manila and be in survivor territory of the Caramoan Islands.

How to get to Caramoan from Manila

There are several options to go to Caramoan from Manila:

As you can see above there are multiple options. I arrived after driving from Legazpi and then taking a long boat ride. It was a long day of transit but it was okay. When I left back to Manila it was very quick. Only a 20-minute boat ride to Virac from Tugawe Cove Resort followed by a 1-hour plane ride from Virac to Manila. 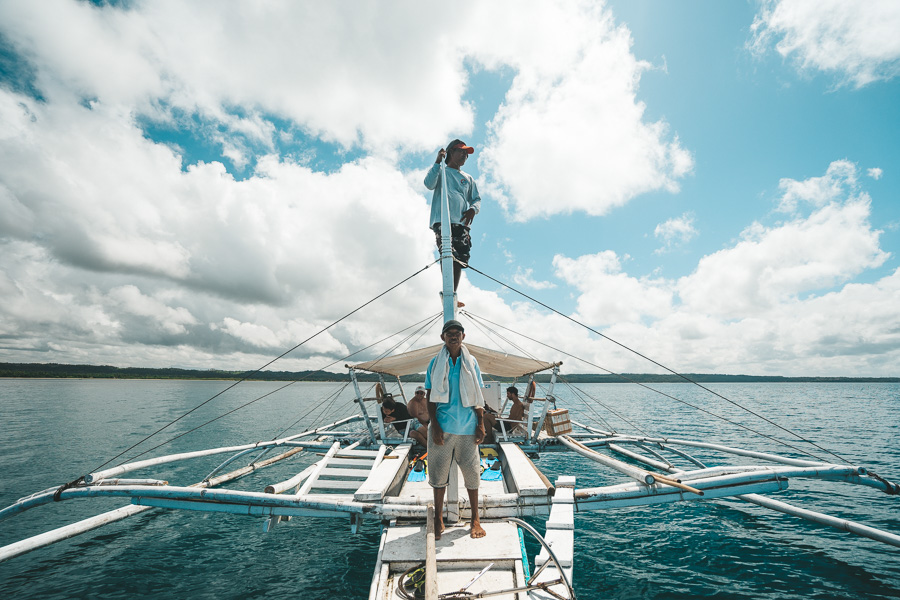 Our island hopping began from Tugawe Cove Resort at 8 am. We were in for a big day but we only needed to bring our swimming gear as the tour guide arranged the snorkels and water and lunch would be provided at Hunongan Cove.

We docked our boat at Katanawan Island and the first thing that caught my eye was the crystal clear water. It wasn’t just perfectly clear, it had an electric blue element to it. Something you see throughout the Philippines at places like Kawasan Falls or El Nido!

There was no-one else on the island except for a local boat around the corner. A family of Filipinos were eating a meal on the beach and waved at us with a warm welcome.

We decided to climb the hill viewpoint on Katanawan Island as it was just too enticing not to. It ended up being much steeper than we had anticipated and the gravel made it difficult to find steady footing. We went up in shoes but I still don’t recommend trying this unless you are keen for a lot of scratches and some sketchy moments. The view is worth it but this climb isn’t for everyone. We embraced the scratches and clambered up the hill. At the top, we were blown away by not only the water clarity but the view back down over the main section of Katanawan Island.

I couldn’t believe I had never even heard of these spots yet they were insane and completely empty. It was only the first stop on our Camaroan island hopping experience but I was already stoked! 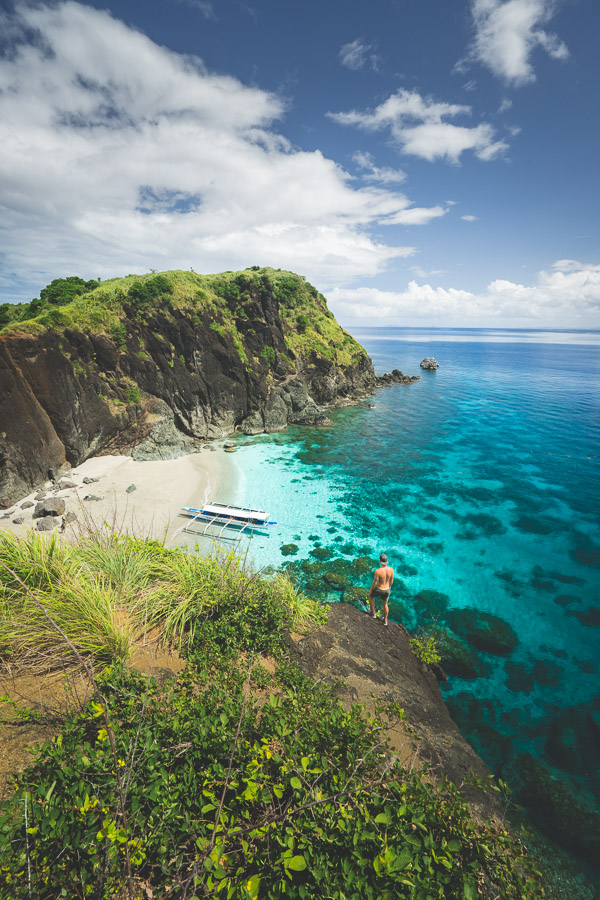 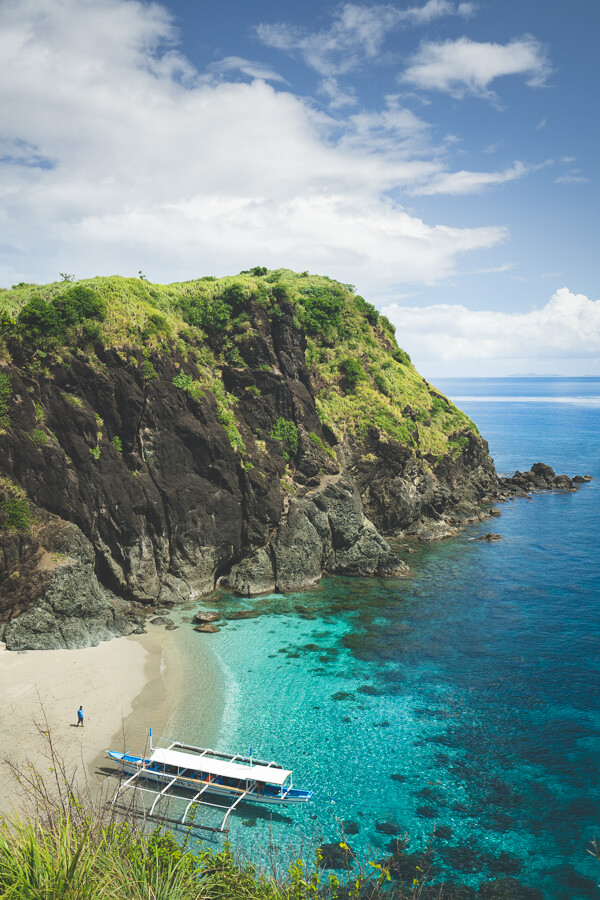 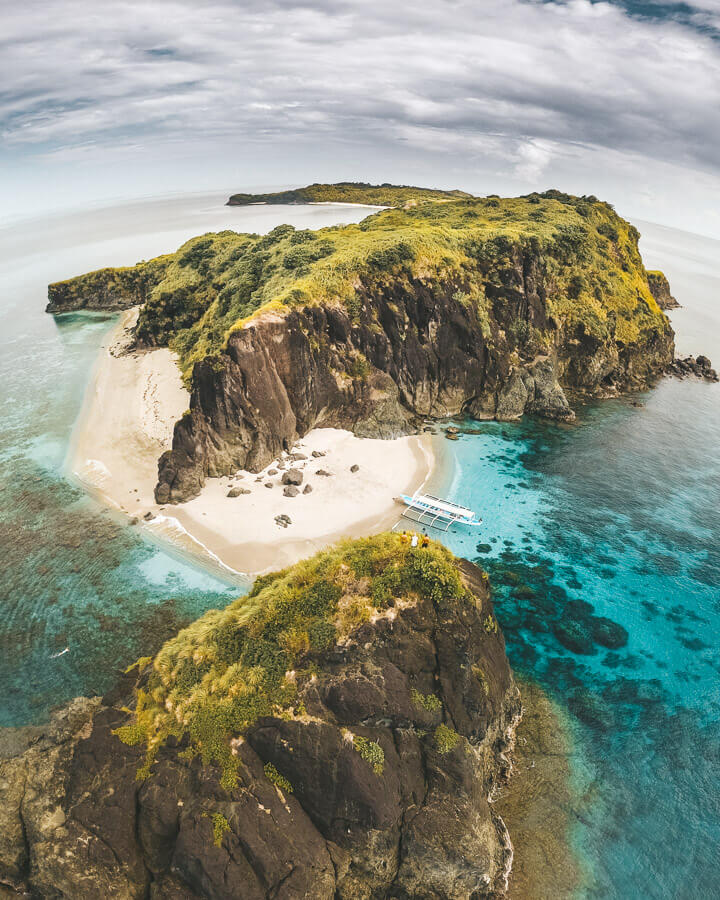 Katanawan Island. The three of us stood up on the viewpoint as Dan Moore clicks a shot from the drone.

We continued our cruise throughout the Caramoan region and our next point of interest was a snorkel near Cagbalinad Island. Many boats stopped on the island but we dropped an anchor just off the island and swam near the reef. There were lots of fish and we even followed around two poisonous sea snakes. I managed to get up close and personal with one while shooting with my GoPro dome. I was shooting a video and posted the short clip below!

I swam into Cagbalinad Island and chilled on the beach, like a true castaway. All throughout the day on our Camaroan island hopping trip, there were so many isolated moments on beautiful islands. It’s awesome to have the deserted island feeling rather than the touristy vibe with hundreds of people in life jackets screaming and taking selfies even though we were never too far away from Tugawe Cove Resort.

From the snorkel spot, I swam all the way into Hunongan Cove for lunch! Is there any better way to enjoy lunch than right by the sea. 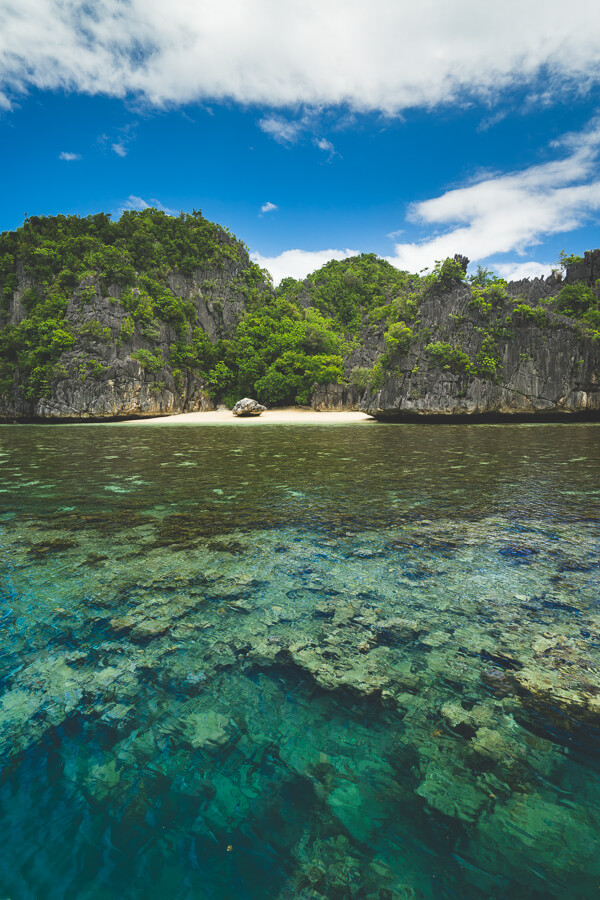 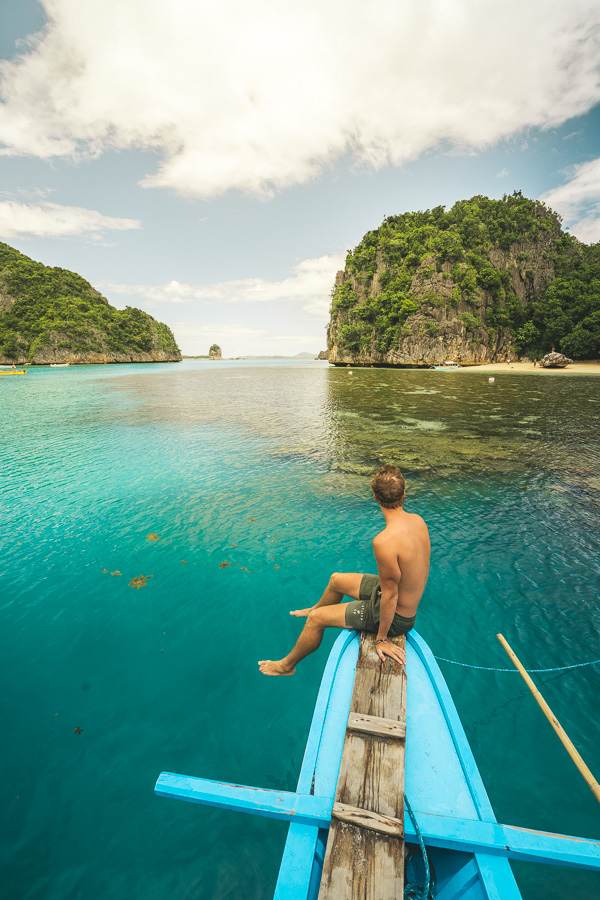 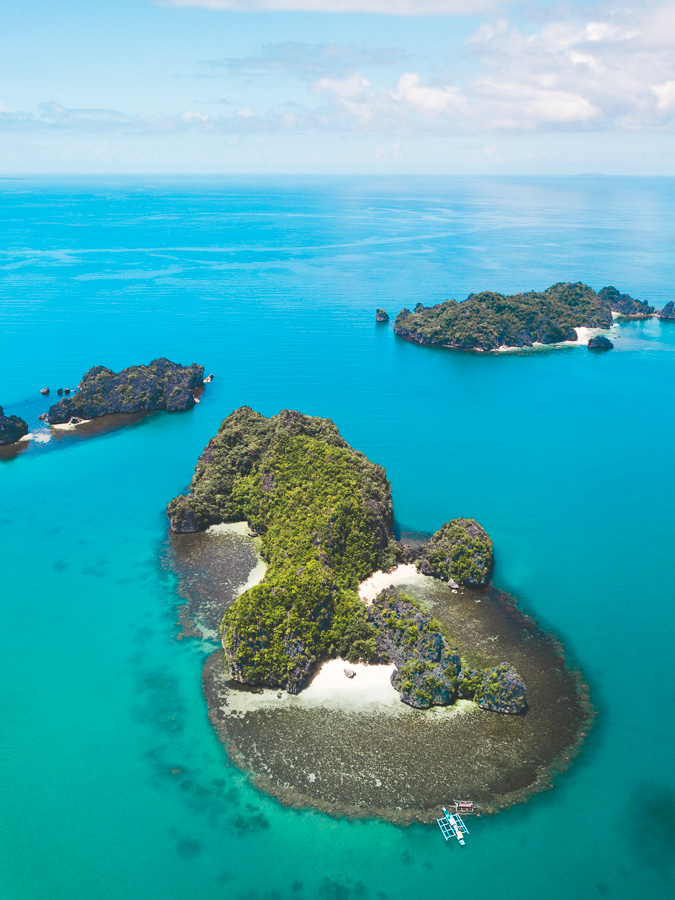 Our boat moored near Cagbalinad Island for our snorkel!

Hunongan Cove is actually part of the mainland but it still feels like an isolated island. I didn’t even realize it wasn’t an island until the captain told me later! The cove sits at the bottom of some huge cliffs, which once again reminded me of El Nido. I know I have said it throughout this blog post, but Caramoan Island hopping is just like El Nido without the hoards of tourists!

This is a small beach with little cottages all along the shore. It is in fact, where the Survivor staff reside during the filming of the series, which is often in Caramoan. When the filming is in full swing this little beach is off-limits but we were allowed on as the cottages must have been empty.

As we arrived at Hunongan Cove, a huge spread of a bbq and seafood spread was prepared on a rug beneath a shady tree. Welcome drinks and fresh fruits quenched our thirst from a few hours in the hot sun. This was an amazing lunch as we looked out over the ocean towards the many islands.

I had a great time flying the drone from Hunongan Cove. From here, I shot the cove but also the islands in the area. I could have spent all day flying in this region! 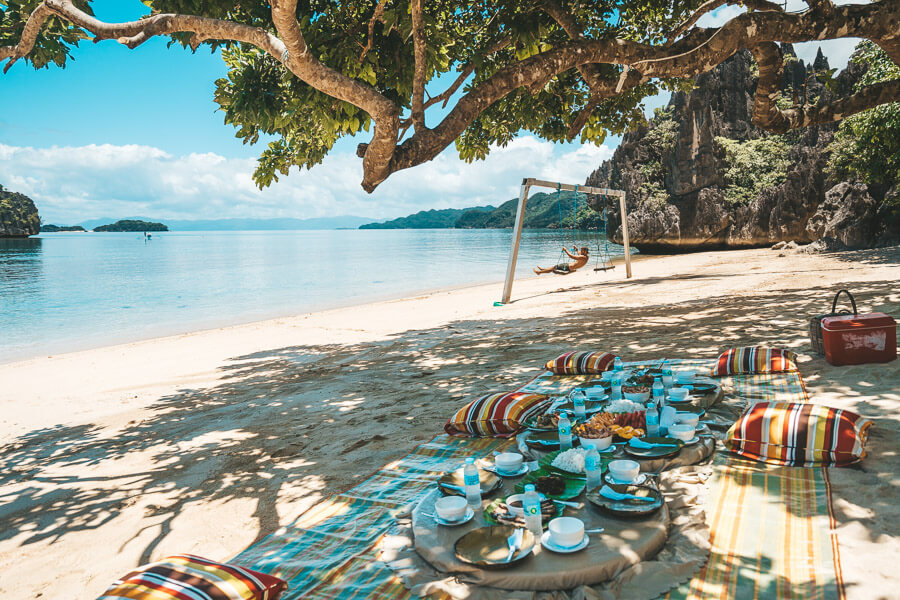 The lunch spot on Hunongan Cove 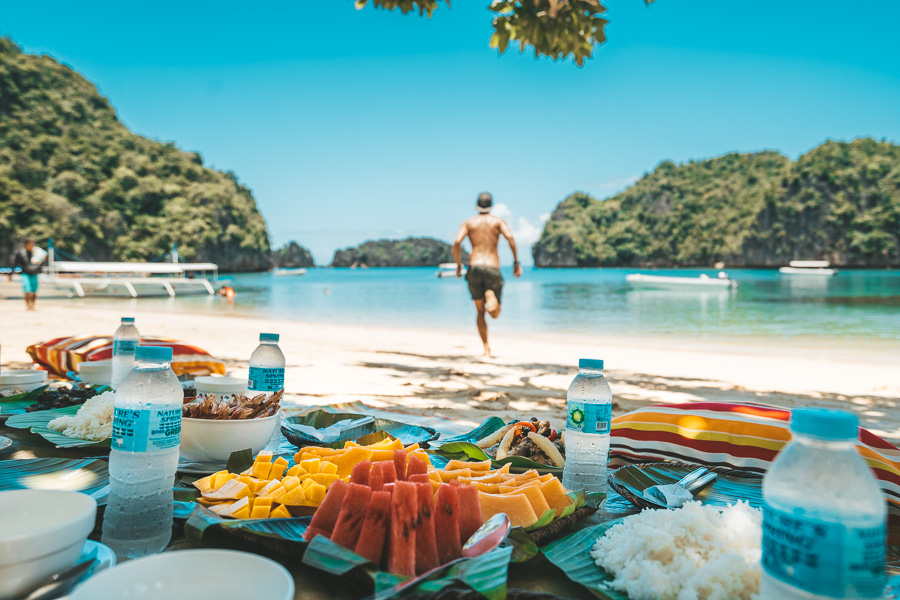 Mango.. but first a swim 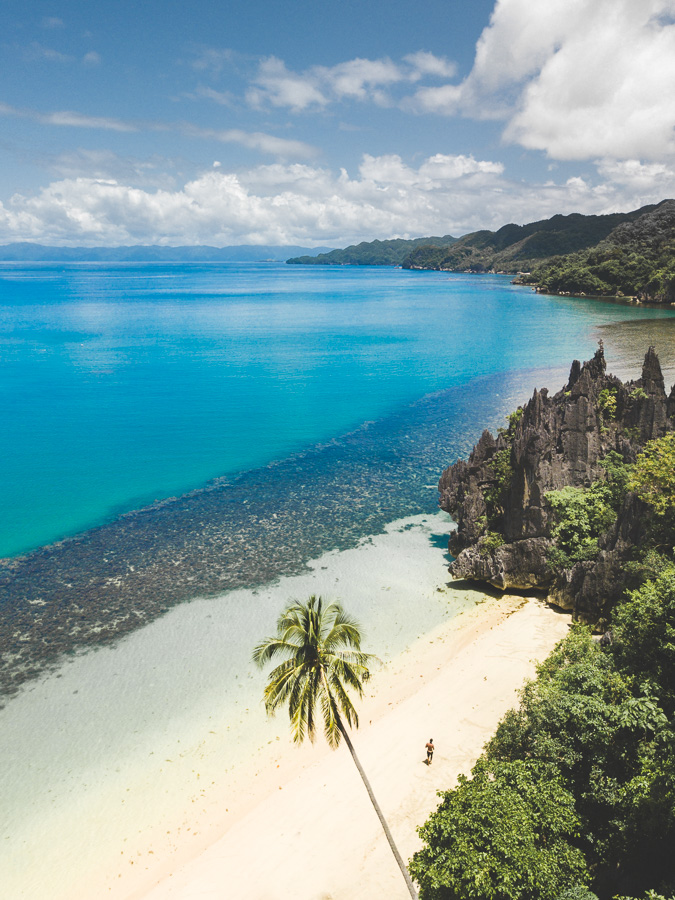 While we were at lunch one of the guys at Hunongan Cove got talking to me and he found out I love cliff jumping. He told me about Matukad Island, which was just a short boat trip away. After lunch, he escorted our boat there and had two local lads show me the way to free-climb up the jagged rocks. We wore shoes but it was still quite a technical climb.

No-one really asked how high I am capable of jumping but when we finally reached the top after the climb I discovered a 20-meter (65-foot) drop. One of the local lads who had helped me climb up grabbed his crotch and said he wasn’t jumping because he wanted to protect his eggs! I thanked them for helping guide me to the top.

Now it was just me and the cliff! With two boats full of onlookers below I jumped for joy into the crystal clear waters below. With no broken bones and a memory, I won’t forget it was probably the highlight of my day!

Other than the Matukad Island cliff jump in Caramoan, there are also several lagoons and lakes hidden inside Matukad Island. I would have loved to have had the opportunity to explore Matukad Island for a couple of hours but we had to move on to the next spot! 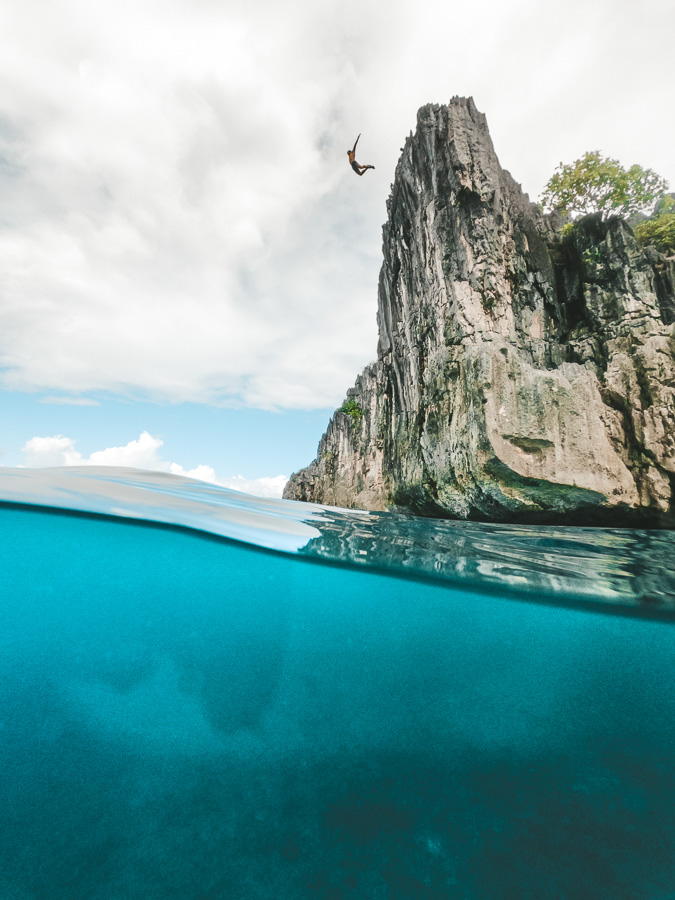 This island was literally a mini El Nido and fittingly it was the most crowded of the day. It seems those jagged rocks are just a magnet for tourists! Crystal clear water and several little caves and beaches to explore kept us busy at Lahos Island for over an hour. I even found a couple of caves that you could swim through. This is Caramoan. It’s only a one-hour flight away from Manila! 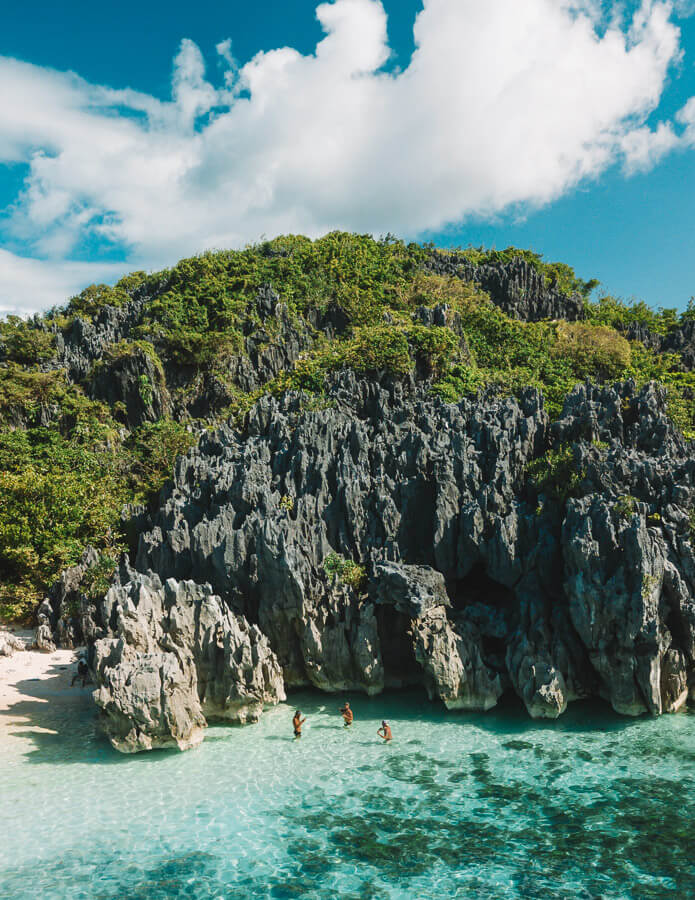 Okay, Tayak Lake is unreal. This is a magic spot and I am so thankful for the chance to explore this insane location. Our boat began to pull in to what seemed like a nice beach but nothing special considering the pristine shore we had embarked on throughout the day. I knew there was a hidden lake in the region and as soon as our boat docked I headed off into the jungle. Our guide was confused as to why I knew exactly where to go.

It was only a two-minute walk until there she was Tayak Lake. From up close the lake was a little lackluster. Algae floated on the surface and a few broken rafts floated near the edges. However, it was from the air that I knew this was going to be an incredible sight. Flying my drone here was one of those moments I will never forget. It was like shooting surfers riding 40ft waves at Waimea or flying the drone over Pianemo at Raja Ampat. You just can’t quite believe it is you capturing these photos! 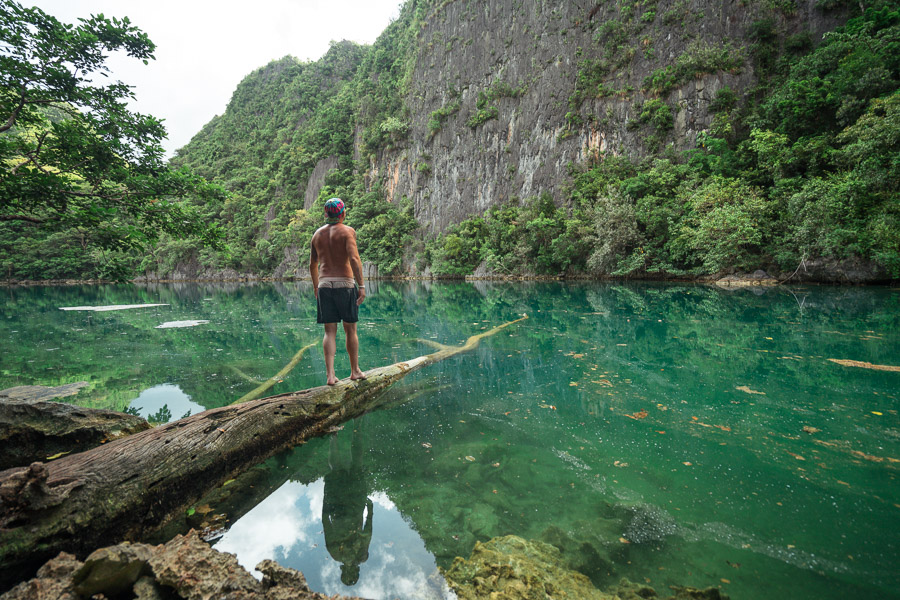 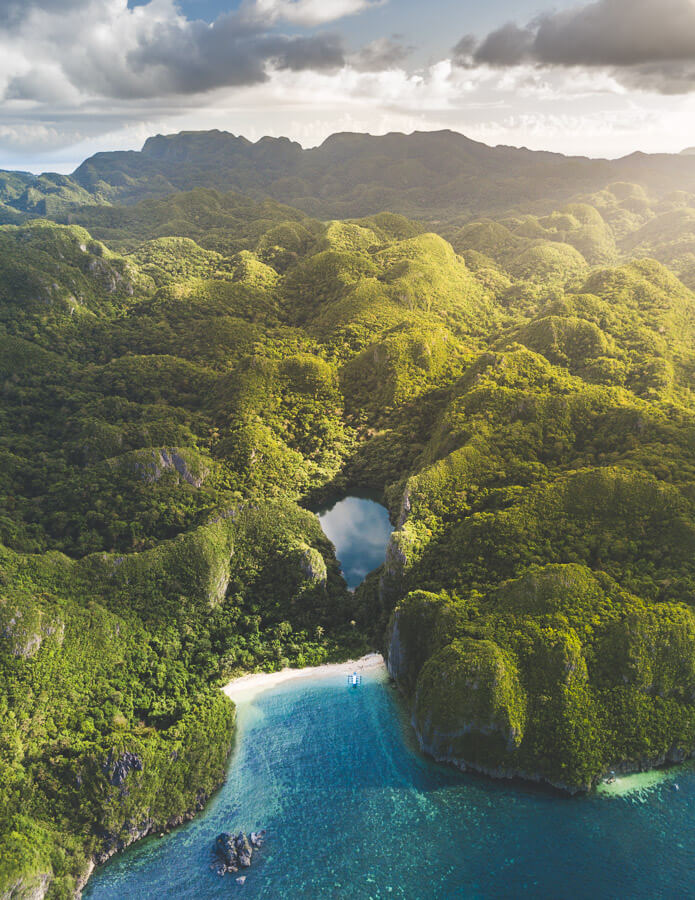 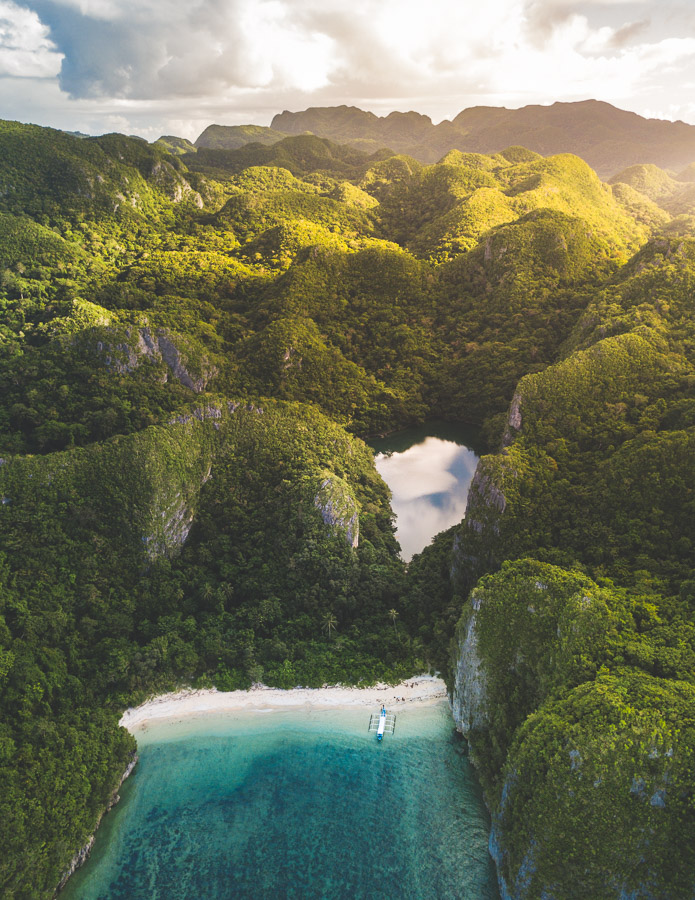 From the beach, you would never know..

The day couldn’t have been topped off by much but when we returned to our Hotel, we decided to head up to the lighthouse at Tugawe Cove Resort and check out the sunset. It was worth the last bit of energy we had! 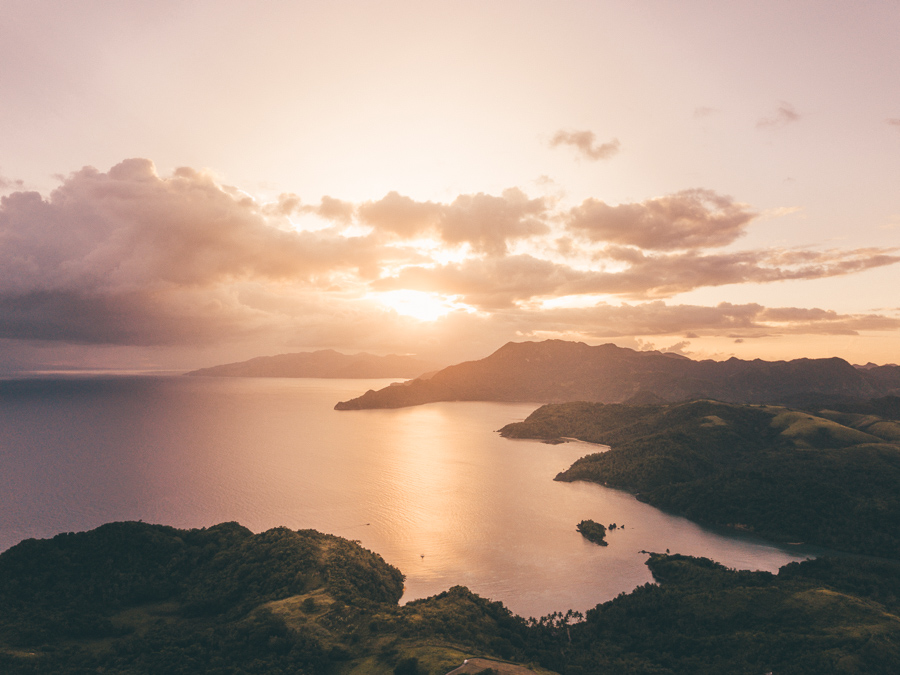 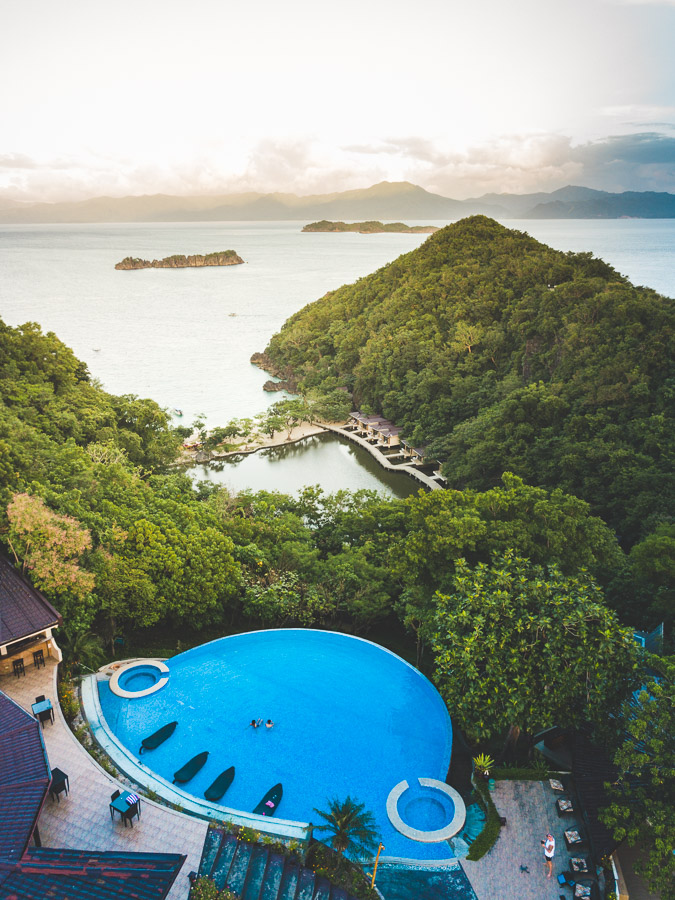 Siargao: 30 AWESOME THINGS TO DO ON SIARGAO

Cebu Things To Do: 16 AWESOME THINGS TO DO ON CEBU

I thought of these websites may help your Caramoan travel plan:

Please visit the above websites to see what may suits your travel needs. Enjoy your tour. God bless

Island hopping is good but it seems there's no trees to cover us from the sun.

10 Best beaches in the Philippines, Less traveled islands to visit soon. - The wise half