The Meskendir is a short trail in Goreme that leads you past numerous cave dwellings and historic sites as well as through multiple tunnels. It is quite a shady trail, which makes it a top suggestion for during the middle of the day.

HOW TO GET TO THE MESKENDIR TRAIL

The most popular region for tourists to stay while exploring Cappadocia is a town called Goreme. Uchisar is the other nearby town, which is also an option for accommodation but Goreme is the popular choice by far. Goreme is packed with hotels, restaurants, and cafes, while Uchisar is a little quieter but still has lots to see. There are a few different ways to reach the start of the Meskendir Trail.

A good landmark to find the trail is the Kaya Camping Ground, which is just past the Goreme Open-Air Museum. When you drive towards Kaya Camping from Goreme, you will find Kaya Camping on the left. The first road after Kaya Camping is the road you want and there is a sign on the wall, which I have pictured below to make sure you find the trailhead. Throughout the trail there are signs saying Rose Valley and Red Valley, which means you are going the right way as they are at the end of the trail essentially. 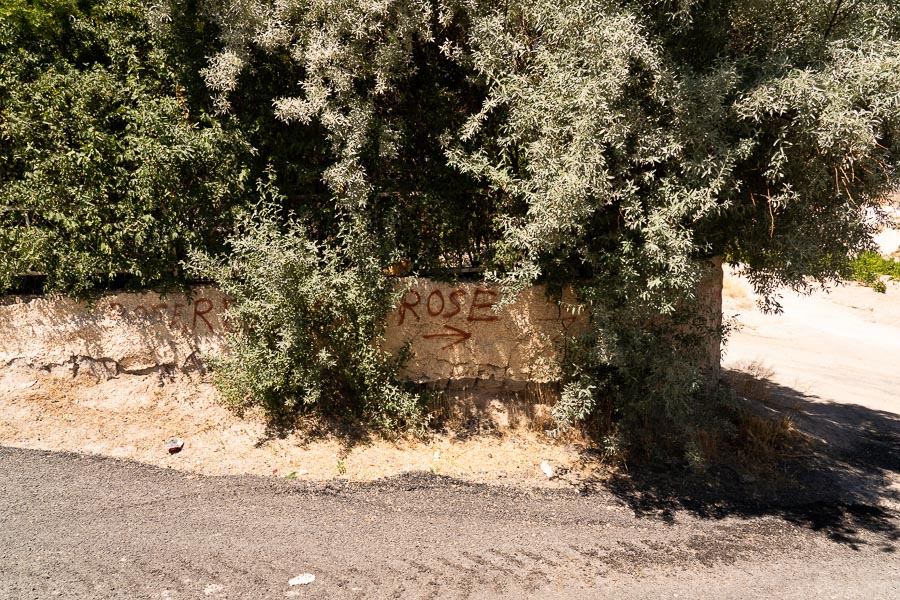 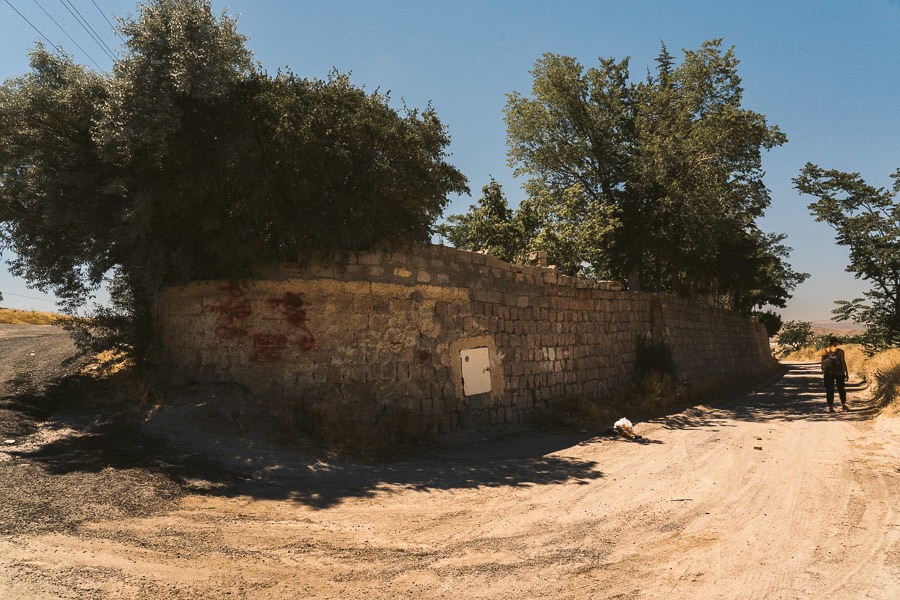 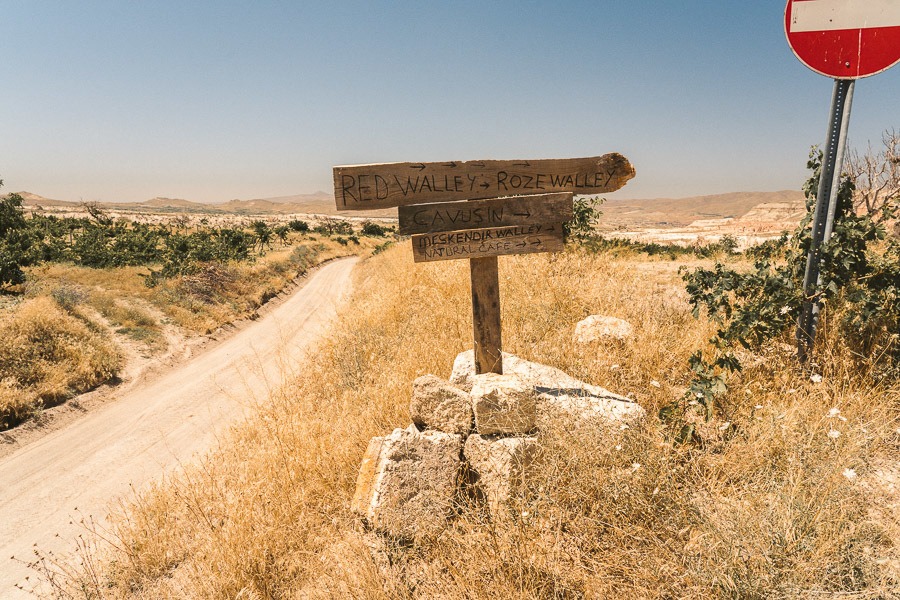 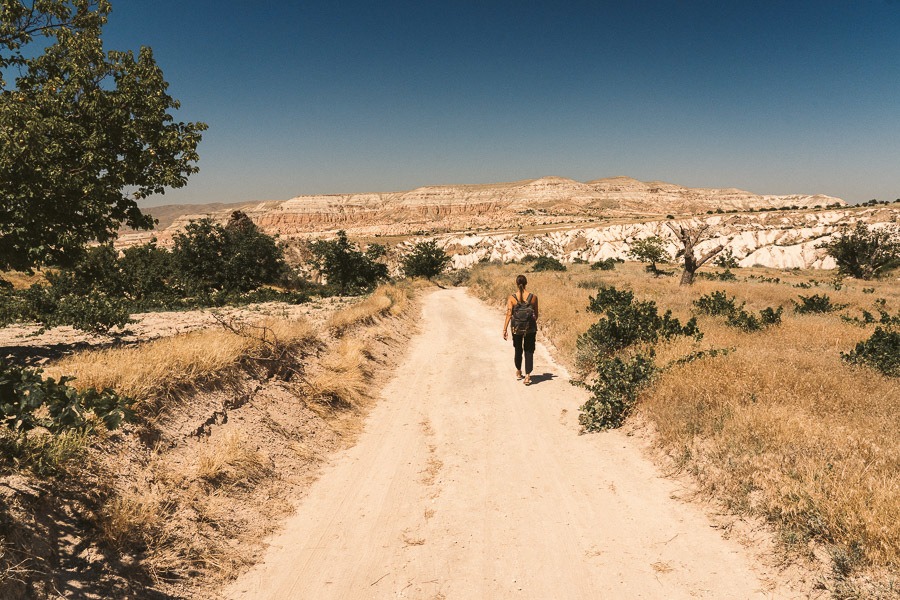 MY EXPERIENCE ON THE MESKENDIR TRAIL

After hitch-hiking our way to the start we found the trail just across the road from the Aynali Church and just after the Kaya Camping ground. Graffiti on the wall said ‘Rose’ and ‘Red’ and we assumed that was our starting marker. It was quite an amateur starting sign and was a bit creepy in red paint almost looks like blood!

Immediately, we knew it would be a quiet trail as you are really in the backcountry and far away from any other attractions other than the Goreme Open Air Museum, but that is on the other side of the main road. The trail quickly dipped down into a mini chasm that wound its way down into the valley. The gravel was quite slippery and we slowly edged our way down the slope. At this stage, we were already impressed with the little canyon and rock formations. 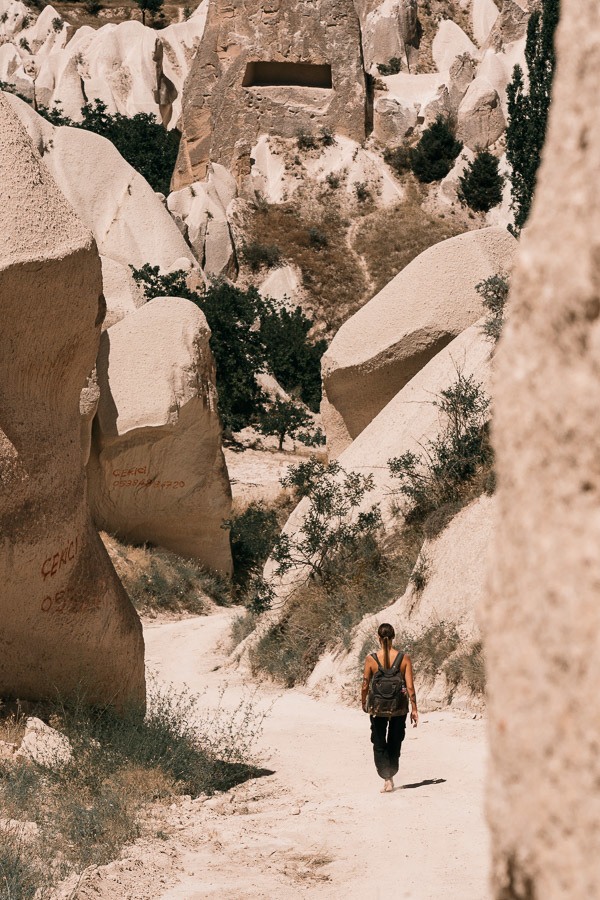 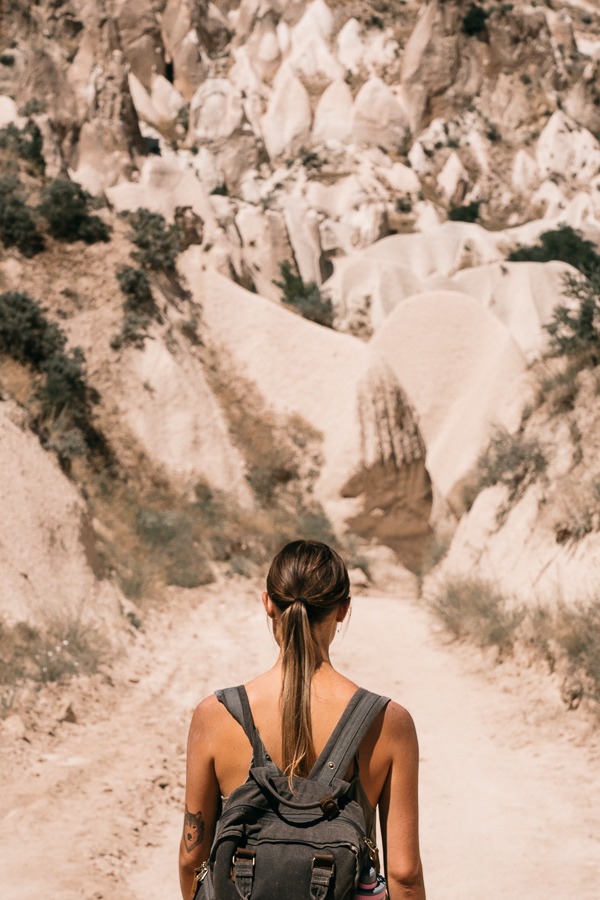 The trail then flattened out and we began entering a series of sandstone tunnel that was super cool. Some of them were similar to the tunnels on the Love Valley Trail but these tunnels were longer and the roofs were much higher. Just like the Love Valley Trail, I think the hot air balloons would fly over this valley during their sunrise flights. If you are planning on taking a hot air balloon flight in Cappadocia you should read my guide first for a few important tips. 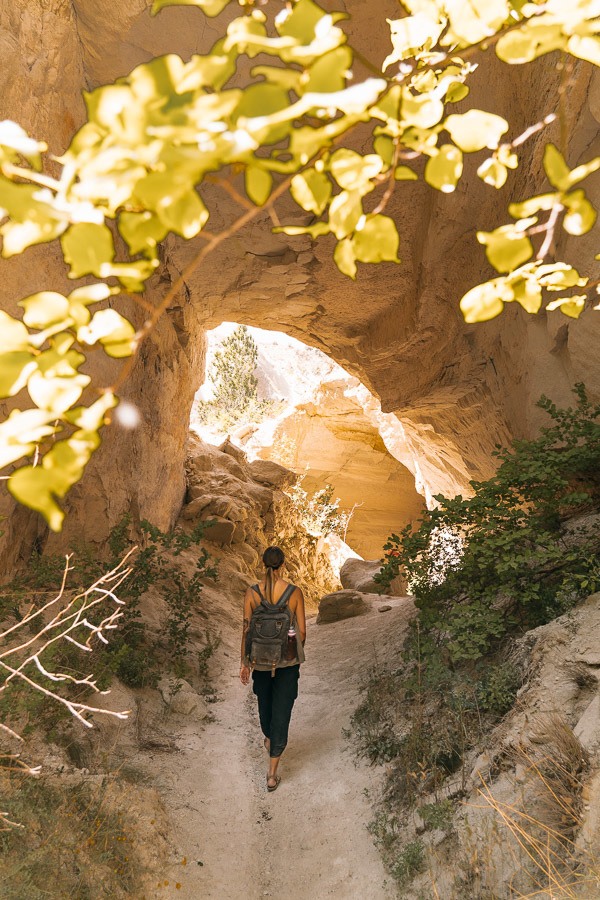 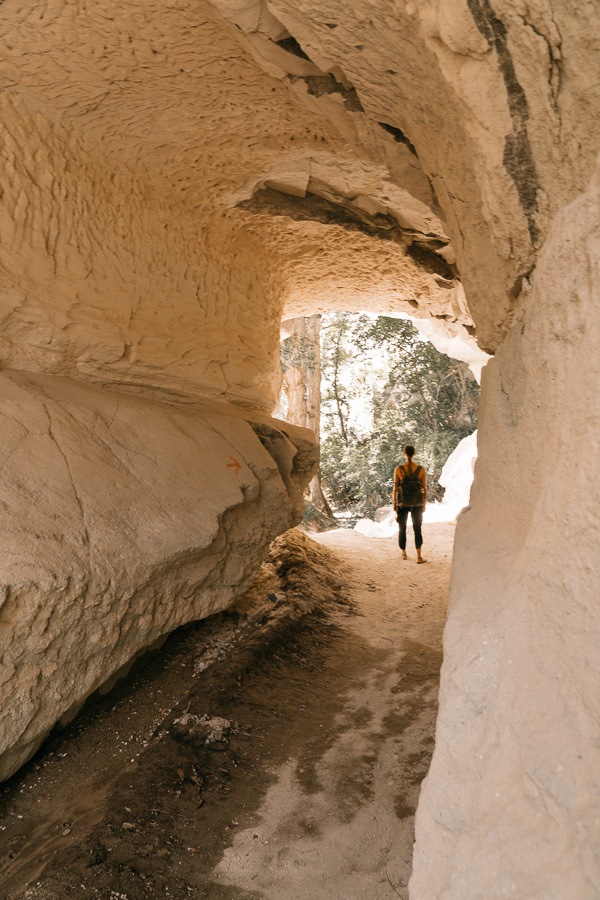 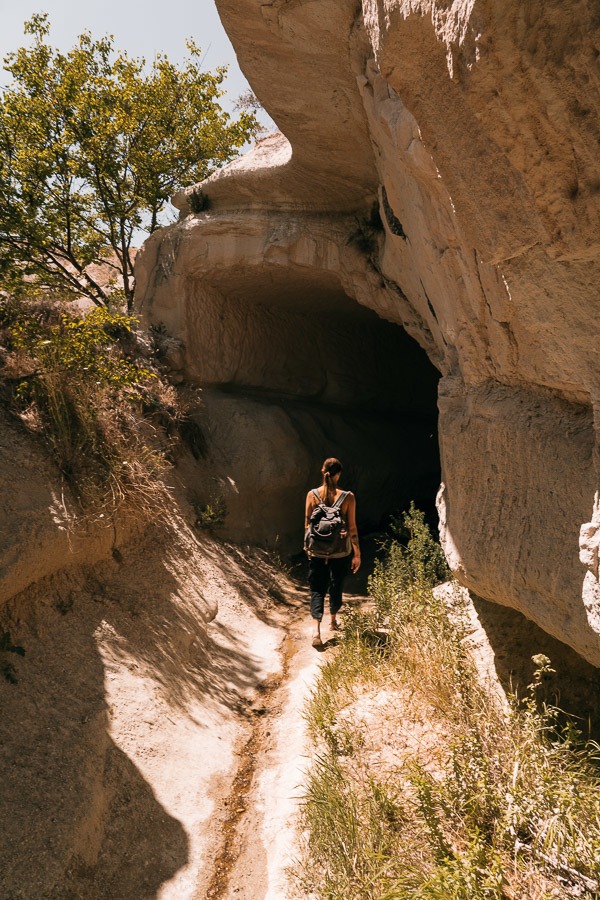 We emerged from one of the tunnels to find a small, wooden cafe. There was a price list, lots of food and drinks but no-one there manning the shop. It was only 10 minutes into the hike so we weren’t too upset about it but it’s always nice to stop for a tea or a juice and support the local vendors where possible. 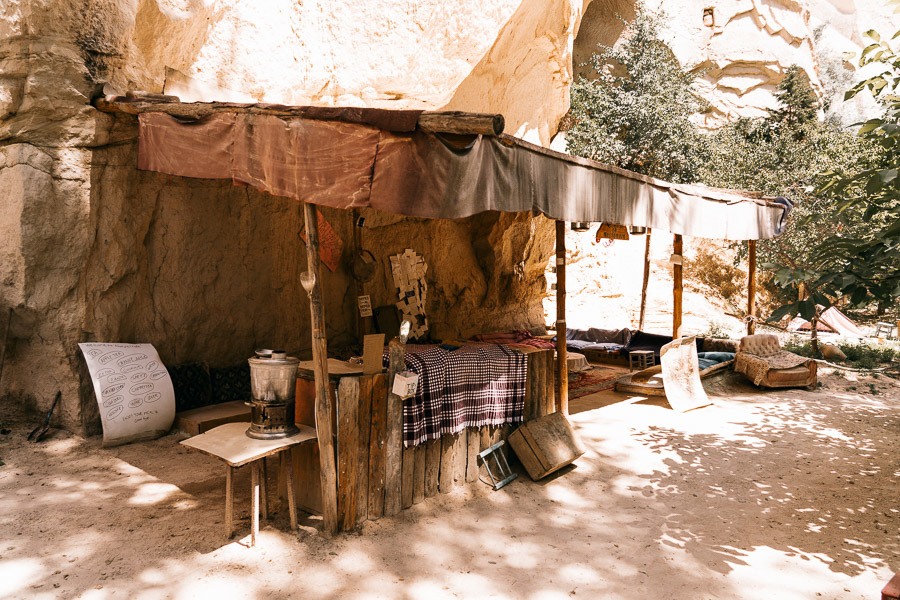 The trail continued on and around every corner would be a little opening that would expose some amazing cave dwellings and historic sites. Huge walls of windows and pigeon holes towered over us as we imagined what the tunnel and stair system looked like on the inside. It’s amazing to try and imagine all of Cappadocia living in this style of dwelling hundreds of years ago. There were even rock paintings high up on the wall. This hike had it all but that isn’t uncommon in Cappadocia. 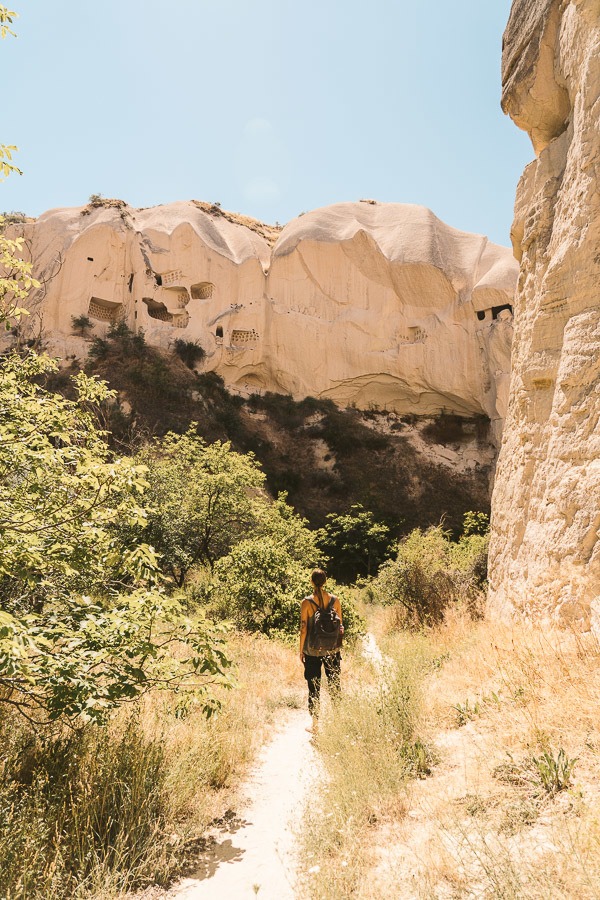 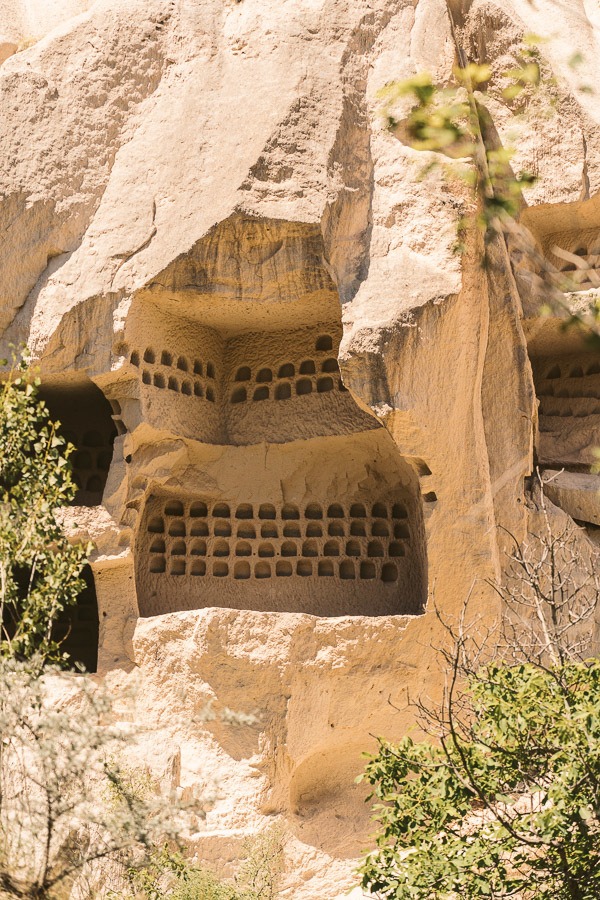 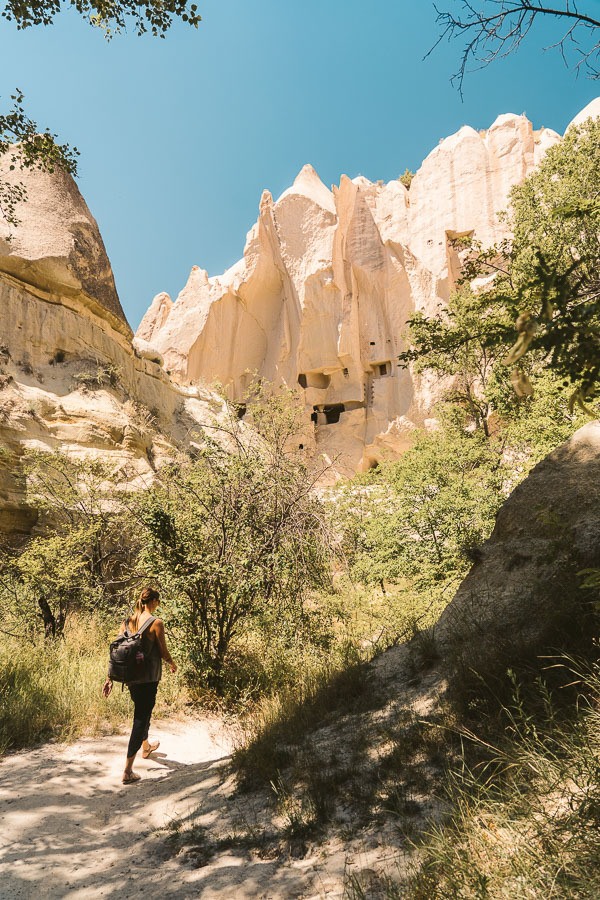 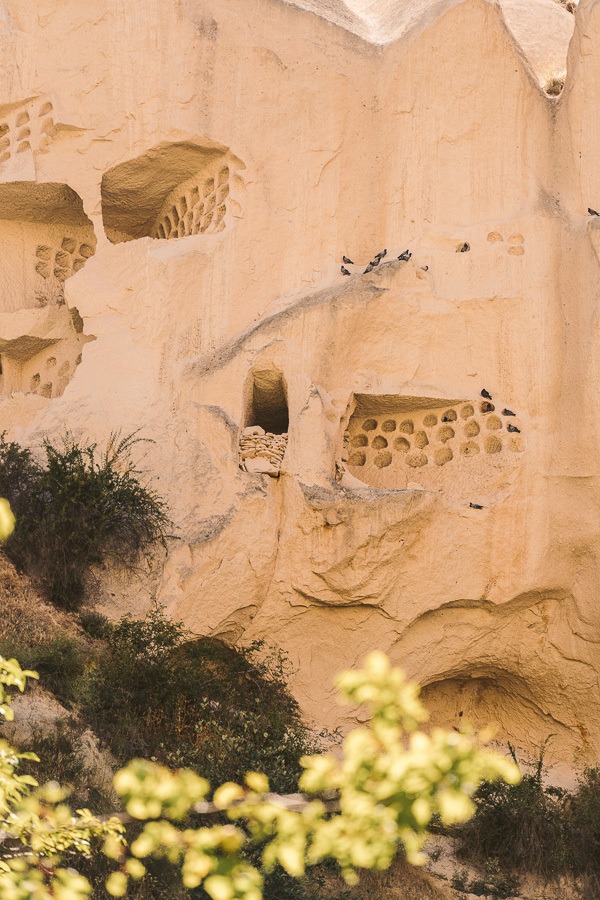 The trail continued on as the canyon finished and we entered more of an open area. That is pretty much the end of the Meskendir Trail but we continued on until we reached the turn-off on the right to head up into Rose Valley. First, though, we stopped and had a freshly squeezed orange juice and bought some mixed nuts from a sweet old lady who was the vendor of a small stand. 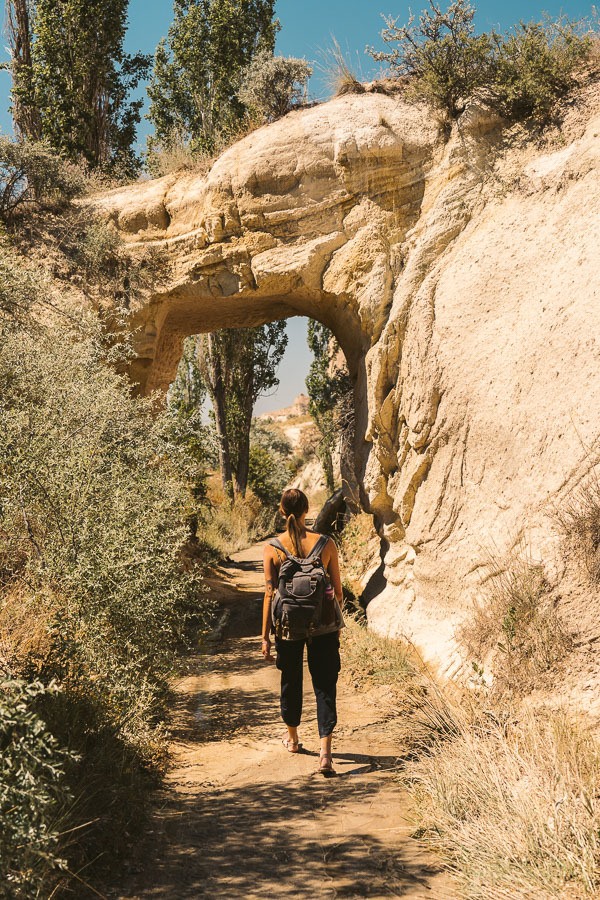 Once you reach this sign or the small vendor that is the end of the Meskendir Trail. You have a few options now:

We took the last option and hiked all the way up to the Red Valley viewpoint for sunset and then managed to hitch-hike back to Goreme after the sunset, which was a big win. Below is the sign to turn off into Rose Valley but if you see the vendor at the wooden shack, you can turn either before or after that shack on two different paths. They are both the entry/exit points to the Rose Valley Loop but it doesn’t matter which one you enter or exit on as it is a connected loop. 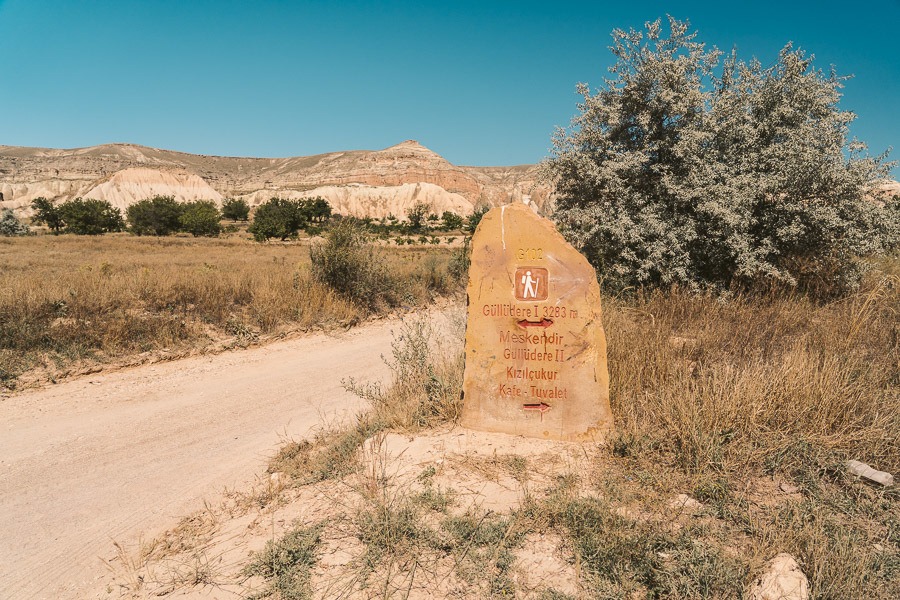 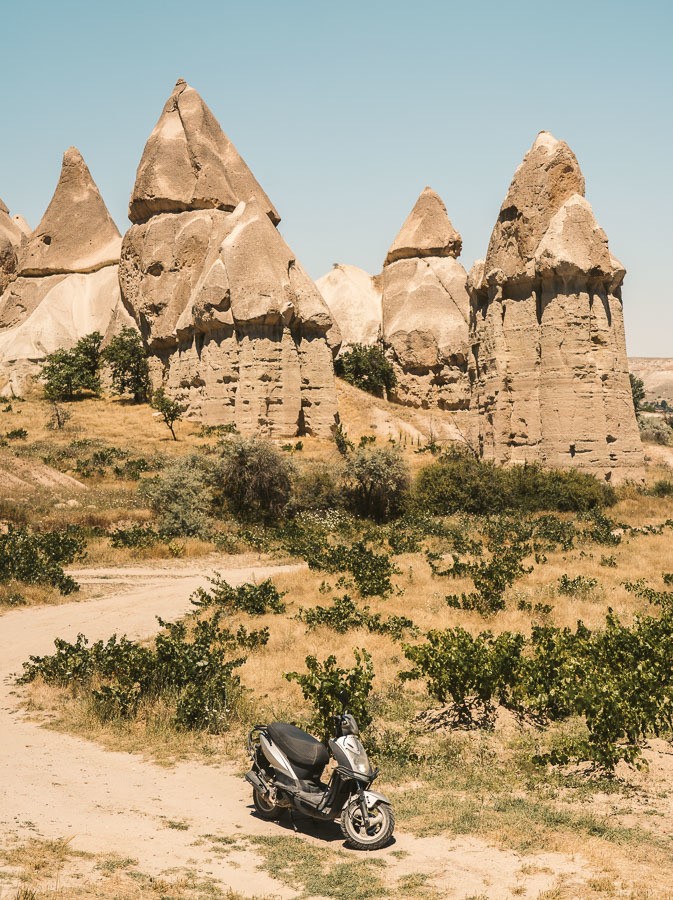