Derinkuyu Underground City cave system is one of the most remarkable things to see in Cappadocia. Walk down through more than five levels of the cave system, which once housed over 20,000 people and their livestock!

HOW TO GET TO DERINKUYU UNDERGROUND CITY CAVES

Most people visiting Cappadocia will stay in Goreme or Uchisar, both of which are quite far from Derinkuyu Underground City. We decided to rent a small car for the day, which cost us $40 USD plus gasoline. This way we could visit Derinkuyu Underground city, which was a 40-minute drive from Goreme and Ihlara Valley is an 80-minute drive from Goreme.

TOURS THAT TAKE YOU THROUGH DERINKUYU UNDERGROUND CITY

The GREEN TOUR in Cappadocia is a pretty awesome day out and includes a short trek in Ihlara Valley and a visit to Derinkuyu Underground City.

You can CLICK HERE to check the prices and make your booking now for the Green Tour.

HOW WAS DERINKUYU UNDERGROUND CITY DISCOVERED

Derinkuyu Underground City was a secret for a long time! It wasn’t until a local man in the Nevsehir Province decided to renovations in his home that the ancient city was discovered. After knocking down a wall he discovered a strange room and continued to dig further, exposing an intricate tunnel system with a series of cave rooms. Little did he know it at the time but he had discovered the ancient underground city of Derinkuyu, which was once home to more than 20,000 people. 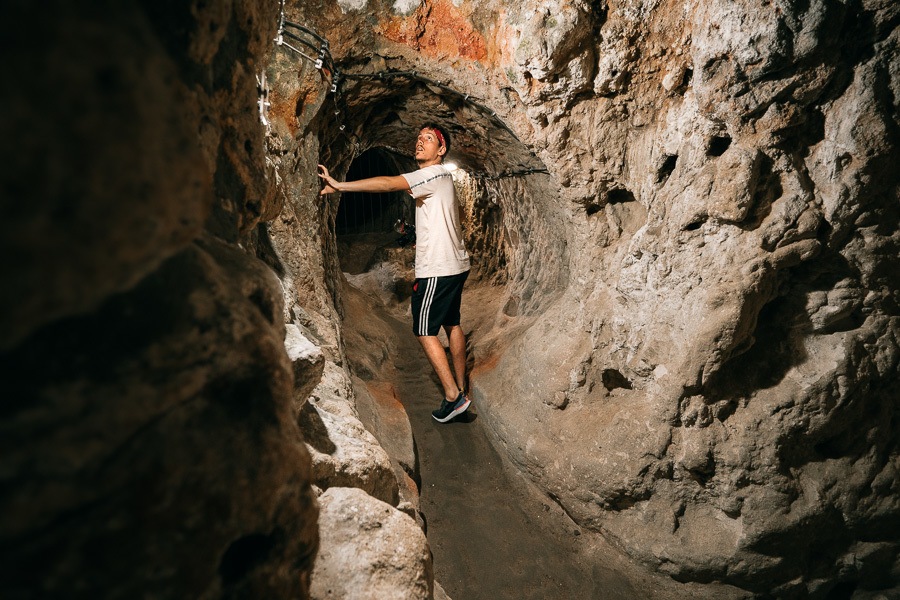 On a 1000m-high plateau in the region of Cappadocia lies the region of Anatolia. Rich in volcanic history, it was covered in ash millions of years ago, which created lava domes and pyramids, which are still evident today. The erosion of the lower sedimentary rock has caused the rock formations or earth pillars we can see today.

This softer rock made it possible for the Hittites of Cappadocia to easily carve out caves and tunnels thousands of years ago. They began by carving out storage rooms and underground food storage. By keeping their food and valuables underneath the ground in storage lockers, they prevented the weather extremes from impacting their goods and food.

Their expertise of underground tunneling would prove valuable for the Hittites when they were able to use their tunnels to hide from the Phrygian raids. The tunnels served the Hittites from the 15th to 12th century BCE according to estimates.

Other suggested dates discuss the possibility of the tunnels being built in the 8th and 7th century BCE by the Phrygians. This theory is backed up by the reputation of the Phrygian architects who were well known for their complex construction abilities and prior projects. This has often led to the Phrygians being credited with creating the tunnels and the underground city of Derinkuyu.

Archaeologists hold a strong belief that there could be hundreds of underground cities in Cappadocia, although to date only six have been excavated. The underground city of Derinkuyu is not the oldest or, in fact, the largest but it has gained popularity because it is one of the deepest. 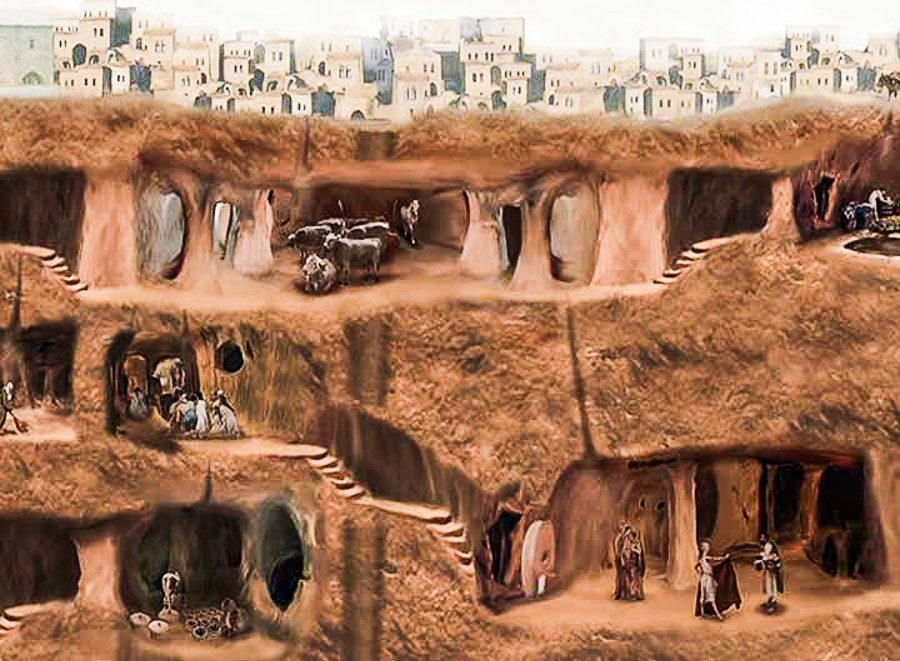 The general consensus from travelers is that you really cannot go wrong. Both underground cities are incredible and give you a great insight into life underground.

Kaymakli is smaller and housed up to 6,000 people while Derinkuyu housed up to 20,000 but this doesn’t matter so much as only 10% of Derinkuyu Underground City has been excavated.

The major difference between the two sites is that Kaymakli has lower roofs and is smaller in general so it can be quite claustrophobic. Derinkuyu has higher ceilings and is a bit more open in general, although there were still many moments we had to crouch for extended periods of time as we walked through alleys and tunnels. Derinkuyu and Kaymakli are actually linked by a 3-mile underground tunnel although it is no longer accessible because it has collapsed. 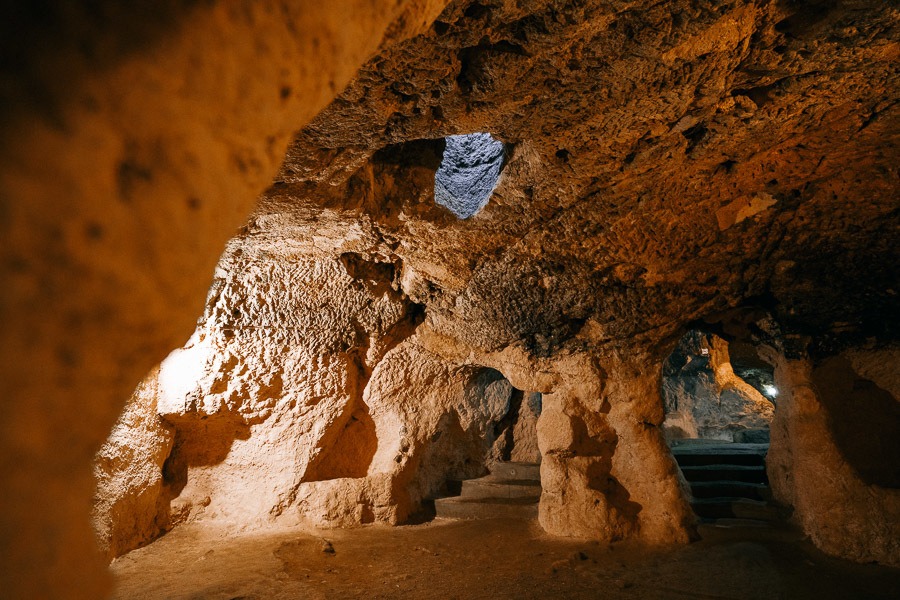 Derinkuyu Underground City entrance fee is 35 Turkish Lyra for internationals, which is about $6 USD, making it one of the most expensive ticket attractions in Cappadocia. It was opened to visitors in 1969, although even today only 10% of the underground city is accessible to visitors.

A guided tour is recommended as there are no signs are information stands available once inside the caves so it is quite important to receive context in each room as to what purpose it served, which is only possible with a tour guide. 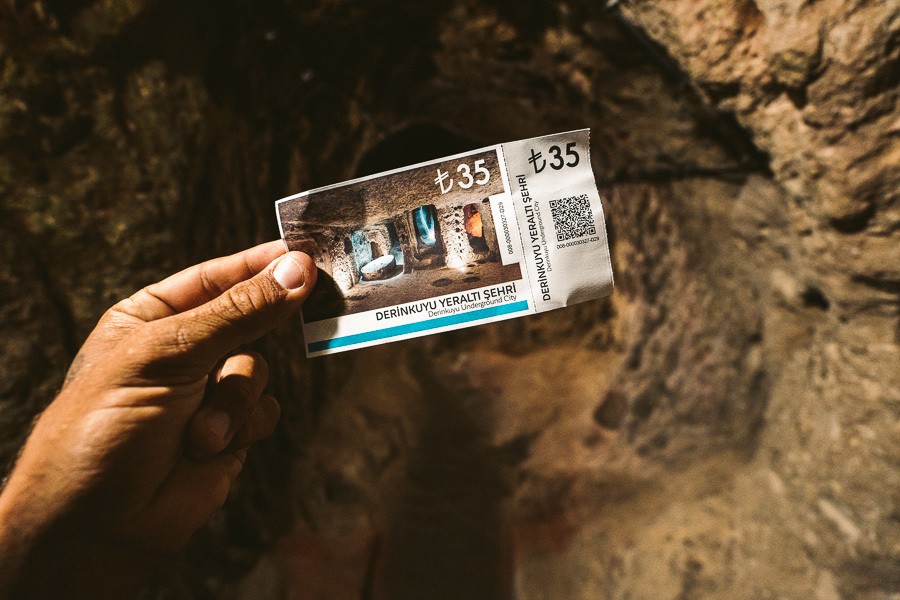 MY EXPERIENCE AT DERINKUYU UNDERGROUND CITY CAVES IN CAPPADOCIA

We began the day driving from Goreme to Derinkuyu. It took about 40-minutes to complete the very scenic drive. The site was actually quite busy with at least a hundred or more people outside and milling into the caves.

I wasn’t quite sure what to expect as we entered down into the first cave entrance but it was honestly quite incredible. As soon as we were inside, you can’t help but imagine what it felt like centuries ago to live inside these stone tunnels. 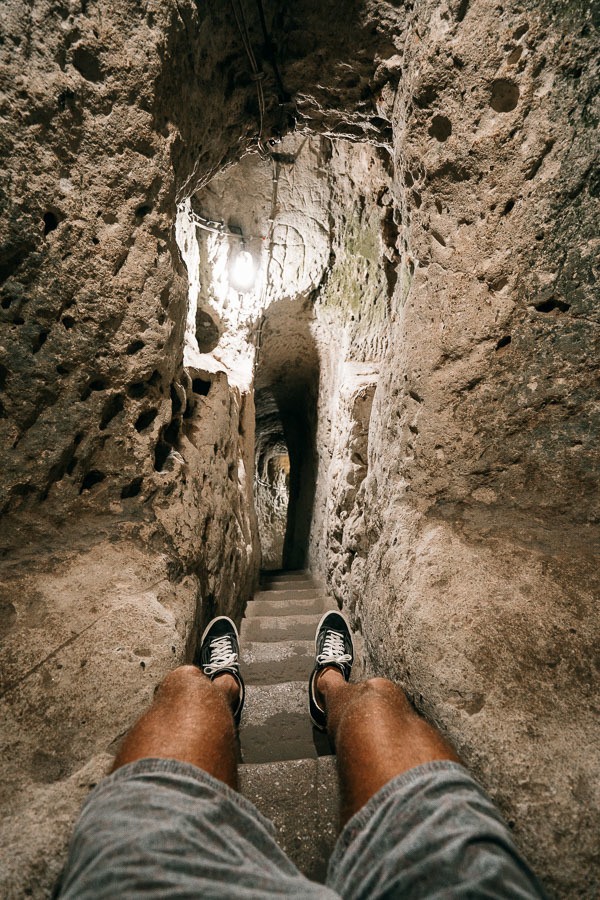 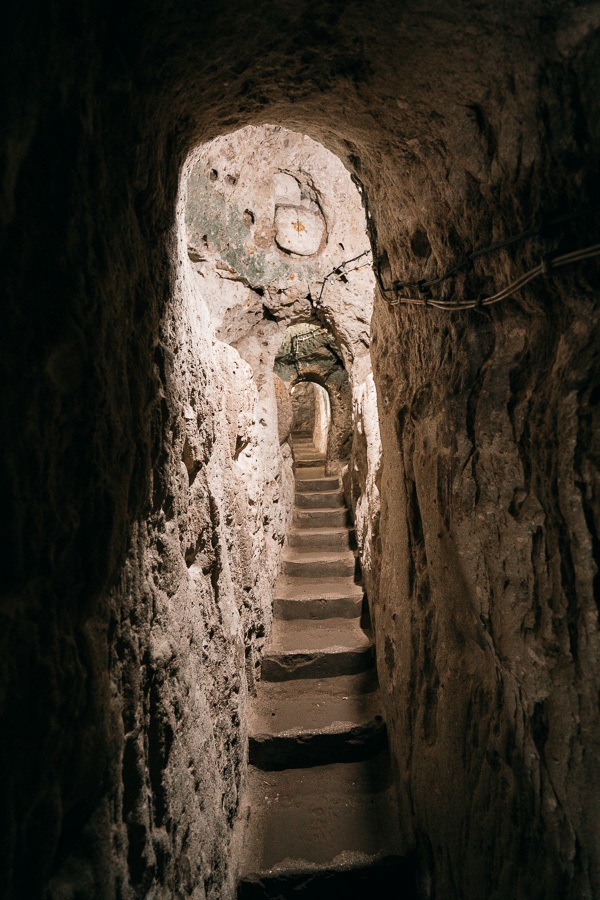 A labyrinth of alleys, tunnels and secret rooms were used for storage, livestock, sleeping, and cooking. Derinkuyu Underground City is the deepest of the discovered cities in Cappadocia with eight floors reaching up to 280 ft in depth. Experts think it could actually be 18 floors deep!

The tunnels were quite narrow and often not tall enough to stand upright. This wasn’t a design flaw but actually, a defense mechanism to ensure invaders had to enter crouched over and in single-file, making it much easier to defend against. 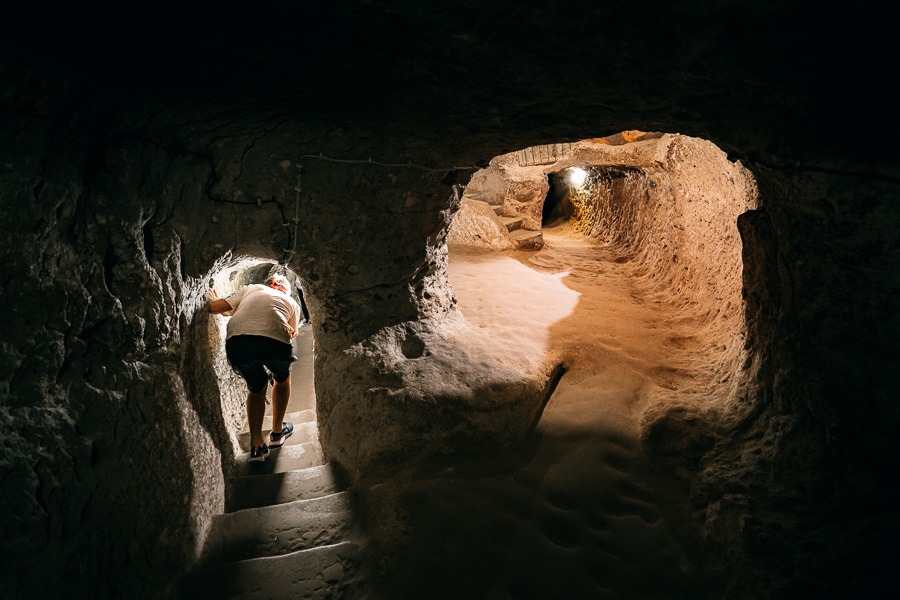 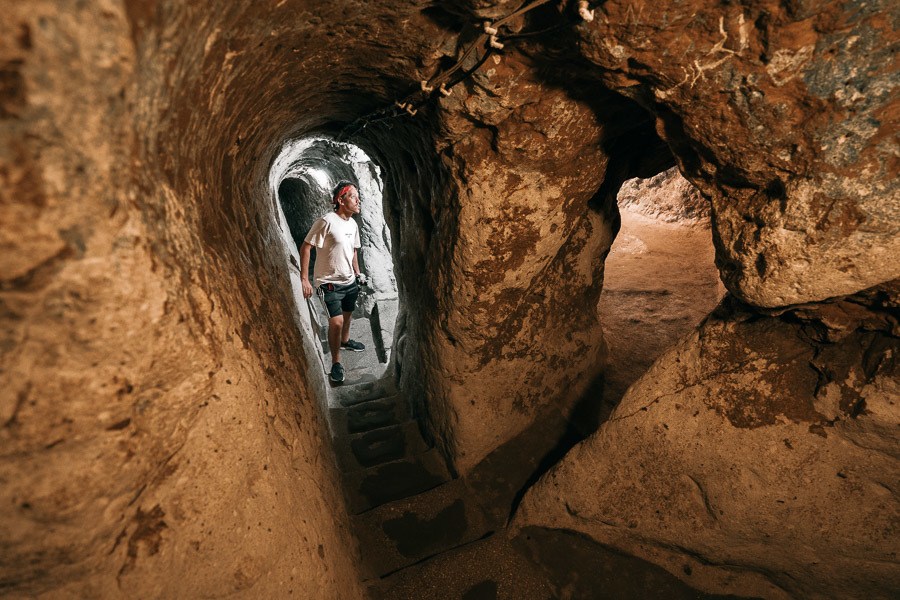 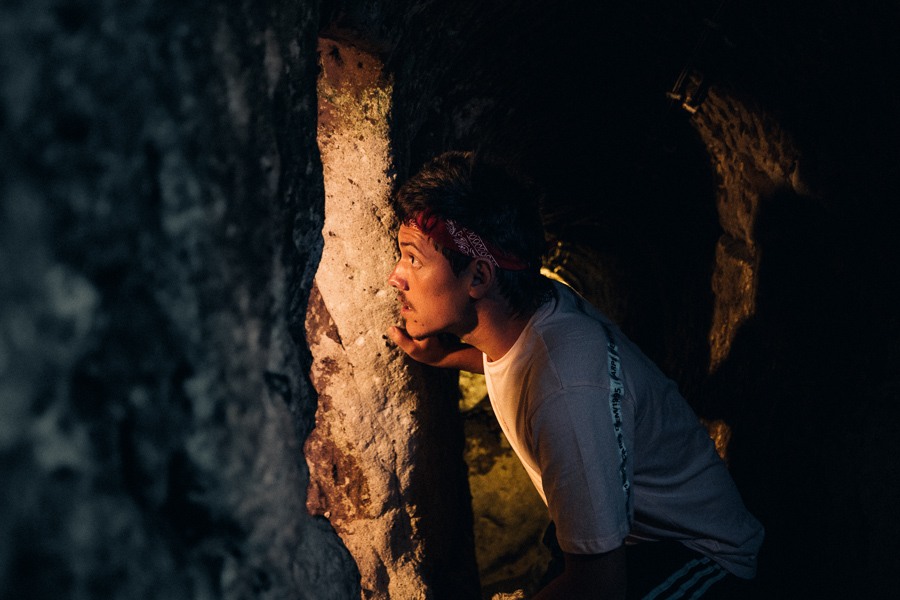 I think the most interesting part was the ventilation shafts and how you could manage to deal with sewage, ventilation, and other logistical issues when 20,000 people are living in underground tunnels.

The experience was very interesting and I highly suggest visiting Derinkuyu Underground City to gain an insight into this unique historical way of life in Cappadocia. 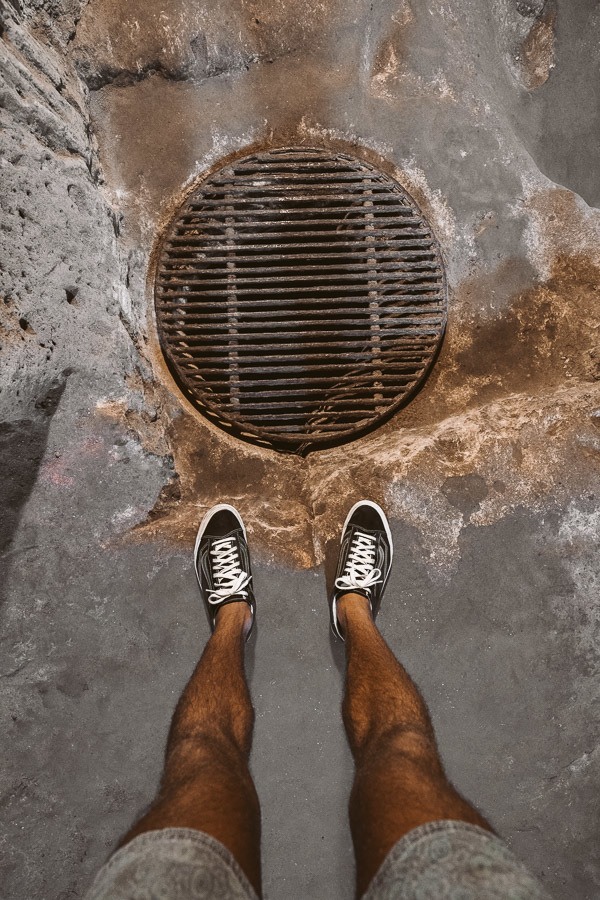