This edition of  ‘THE WEEKLY‘ lets me reflect on seven of my favorite days of travel so far. Last week I spoke about the struggles of sickness I had during the early stages of the hike. They were no joke, but I had now brushed them off and the final days of climbing were out of this world.

From Dingboche we trekked through a dust storm and up some mightily steep, winding paths to arrive at Lobuche. Like all the other towns along the way, put anywhere else and it would be insignificant. However, it is wedged in a small valley, dwarfed by the surrounding snow-capped mountains. 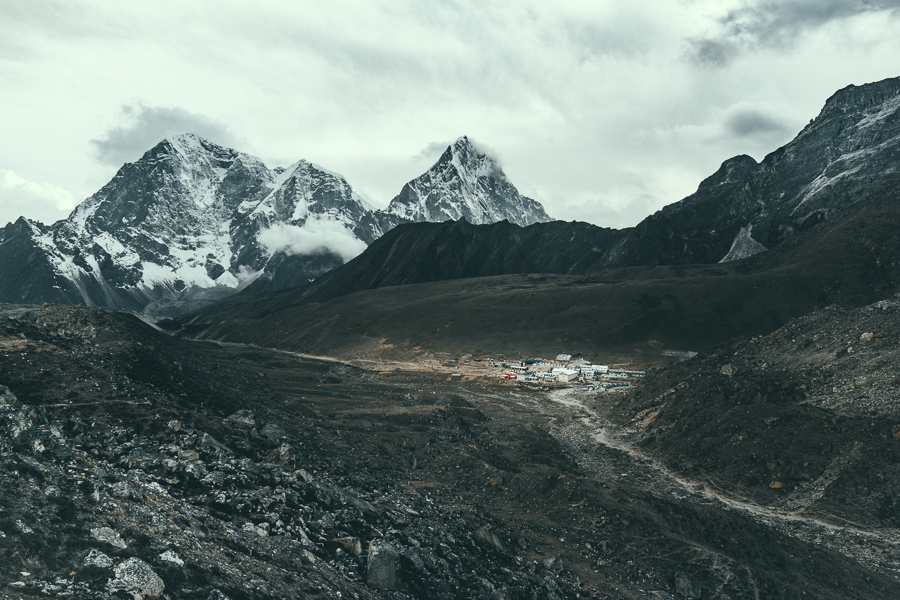 Lapsang and I trekked up the hill in the middle of the valley twice that afternoon enjoying the incredible views in pretty much all directions. It was here that I decided it was a place that would best be captured with time-lapse. The cloud movement was intense and incredibly fast because we were so high. So high in fact that there was no chance of rain. It is either dry or it snows.

Here is the short timelapse film I made if you wanted to check it out.

The night spent in Lobuche was our final night before we headed to Everest Base Camp. However, Gorak Shep was the final village before the actual base camp. It took us two hour to trek to Gorak Shep. We ate a quick breakfast and then headed off for another two hours to reach base camp. 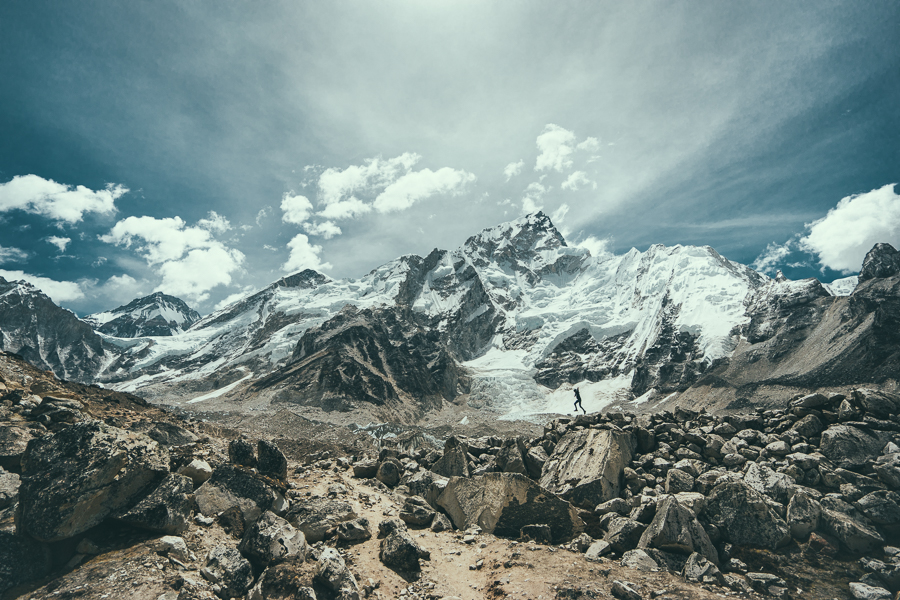 I remember almost reaching Everest Base Camp and asking Lapsang, ‘So how do we get there do we go over that mountain?’ He looked at me puzzled and it was clear we were on different pages. In fact we had already arrived. Naively, I thought there would be hundreds of tents at the foot of Mt. Everest. However, we arrived at a melting glacier on the other side of a ridge to Mt. Everest. It was so cloudy we only got a small glimpse of Mt. Everest for several seconds. 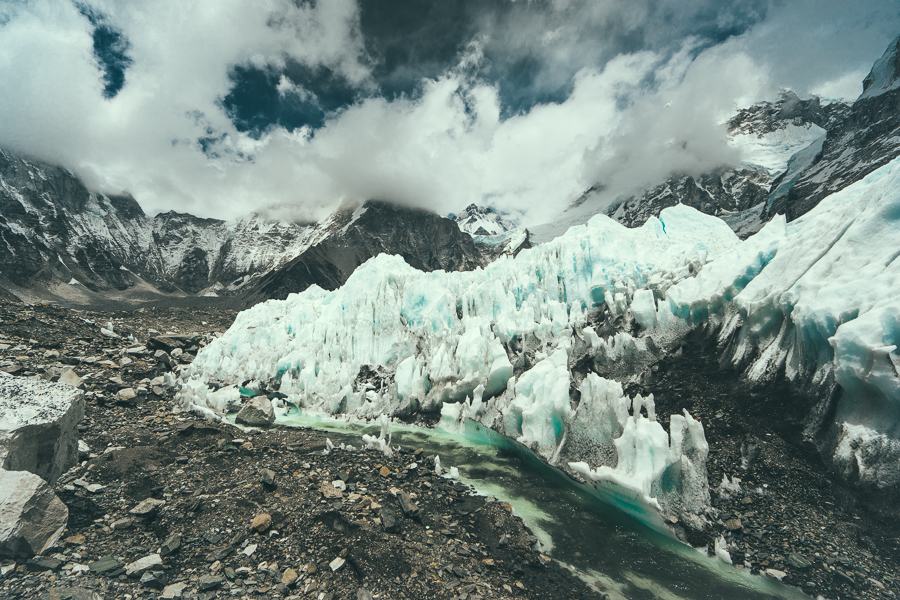 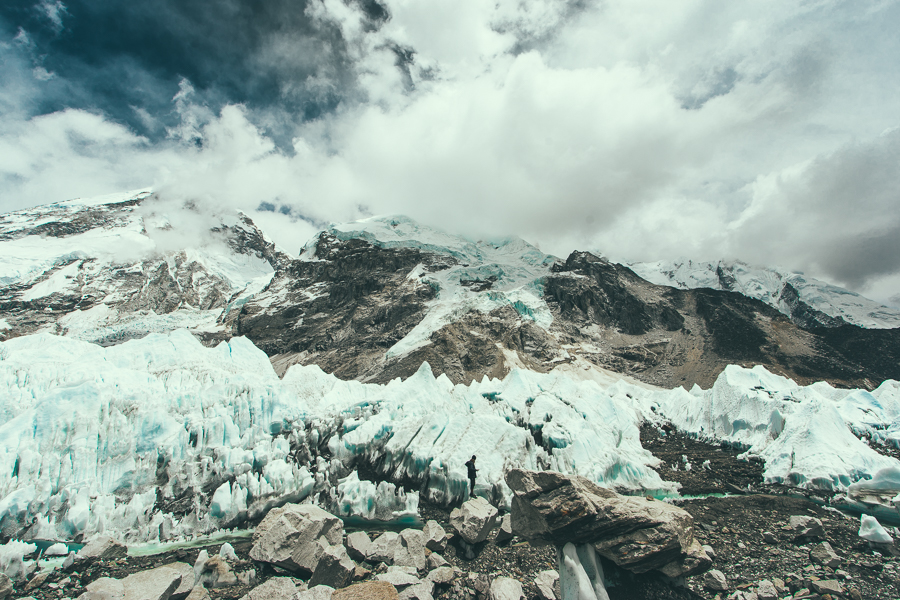 I wasn’t necessarily disappointed, I had just imagined something entirely different. Any shred of disappointment I might have been harboring disappeared as I clambered down from the viewpoint and began to run around amidst the glaciers and ice-cold river.

We spent several hours hanging out on rocks in the sun, marveling at the enormity of the scene we were occupying. 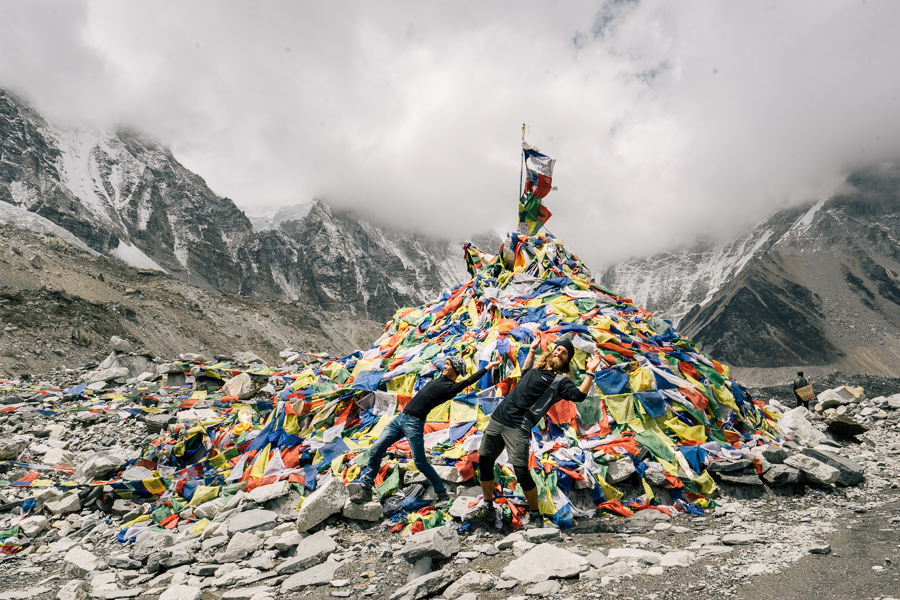 The next morning wasn’t a time to relax, it was a sunrise mission. It would be one of the mornings of my life. At four in the morning, the sky was already light. We bolted up the steep hill. I was wearing all of the clothes I had packed yet still my fingers and toes were numb.

In a matter of seconds, the sky morphed from a dull purple to a fiery red. The Himalayas were on fire. I was so busy trying to catch my breath, take some photos, enjoy the moment and then… it was gone. Two minutes of pure magic that I will never forget. 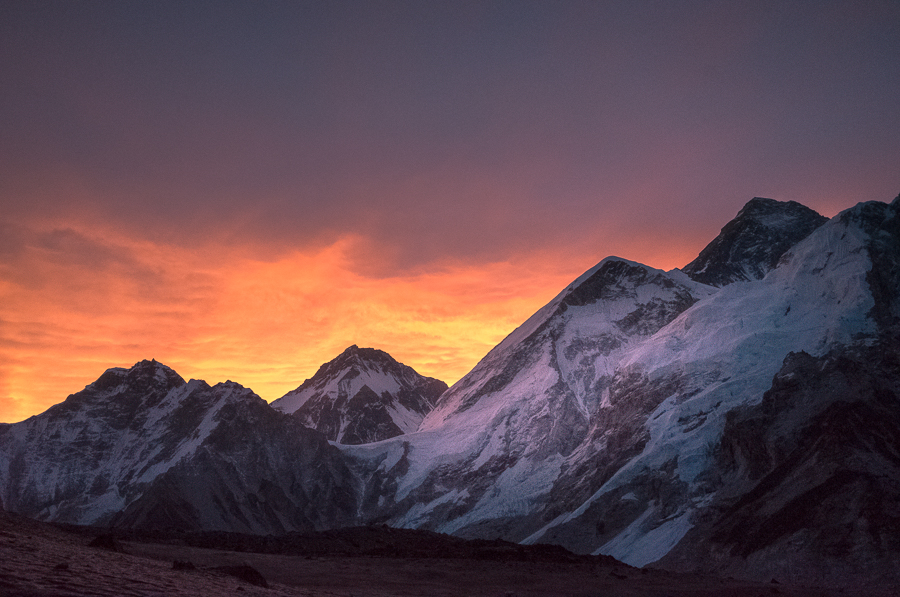 Now that the sunrise had faded we made our way to the viewpoint up a brutally steep hill. The hike/viewpoint is called Kara Pather and is one of the most famous spots to see Mt. Everest. The sky was clear this morning and we hung out atop the viewpoint for several hours chatting, shooting videos and photos and enjoying being about as close to the top of the world as a semi-serious trekker can get. 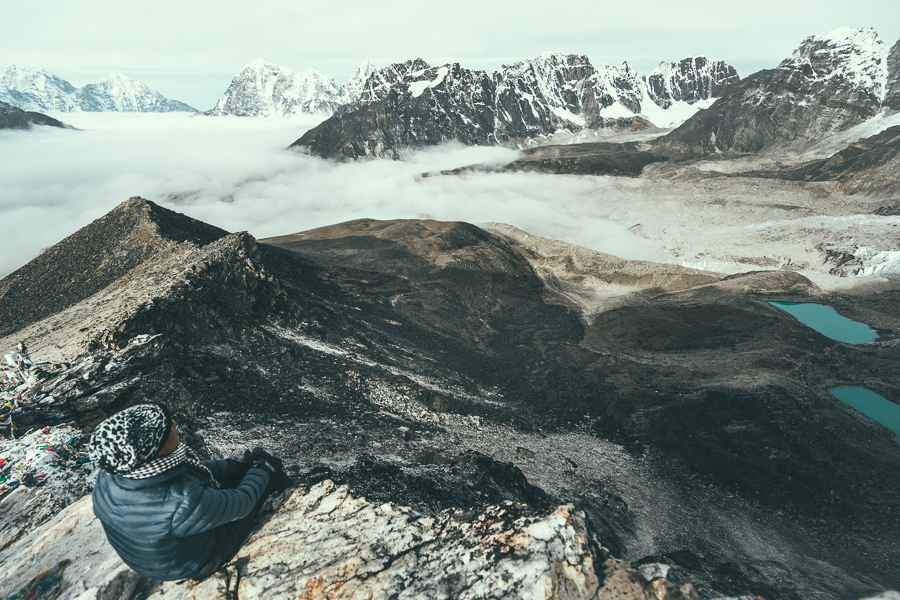 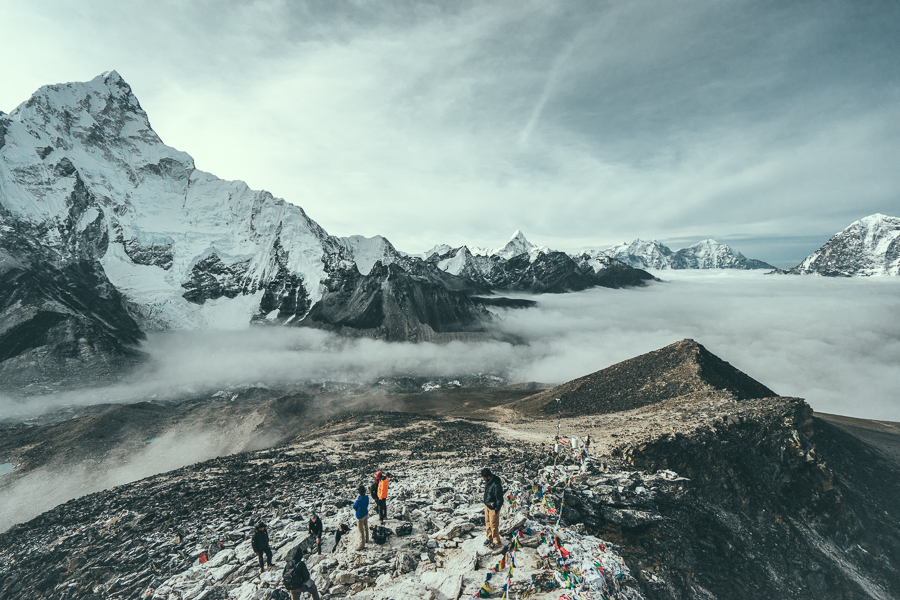 We arrived back to Gorak Shep and our little guest house totally drained. I ate two breakfasts and then sat by the fire.

The thought of four more days of trekking wasn’t too appealing to me considering we were taking the same route out as we had in. Time for a challenge. We had trekked up in nine days so we decided to make it back down in two.

Mission accomplished we made it. 50km in two days more or less downhill, although there were plenty of inclines. We had to wait one day in Lukla for our plane due to a delay and then we finally made it back to Kathmandu after 11 awesome days in the Himalayas.

What have you missed in the last month? Here are the last four editions of ‘The Weekly’: