The 47th edition of ‘The Weekly‘ is a little late. But I promise I have a good reason for the delay. I’ve just arrived back this morning from a 12-day trek through the Himalayas to Mt. Everest Base Camp.

It was as epic as you might imagine. There were moments where it felt as though my guide, Lapsang, and I could have been exploring a new planet. It’s low season on the trails and sometimes we went days without seeing another tourist on the trail. It all sounds amazing and it was.. in the end. However, the first four days were some of the hardest moments I have had since I began traveling.

I had been building up to this hike, paid $900, bought all the gear in Kathmandu and based my whole Nepal experience around the trek. So when I was struck down with the worst food poisoning of my life the night before the trek I thought the whole trip was over. I slept in my thermals, ski jacket, gloves and beanie for half the night, shivering. Then as my body heated up I spent the early hours of the morning in just my shorts, feeling like I was trapped in an oven.

I thought if I could just get in the cab at 5 am, I could slowly recover during the trek. Brave or stupid I still don’t know. I stumbled into the cab, my guide Lapsang probably couldn’t believe his luck, a sick companion for 12 days. I slept at the airport, on the plane and in Lukla, the first town on the trail. After several hours sleeping in the restaurant, we had to begin trekking. 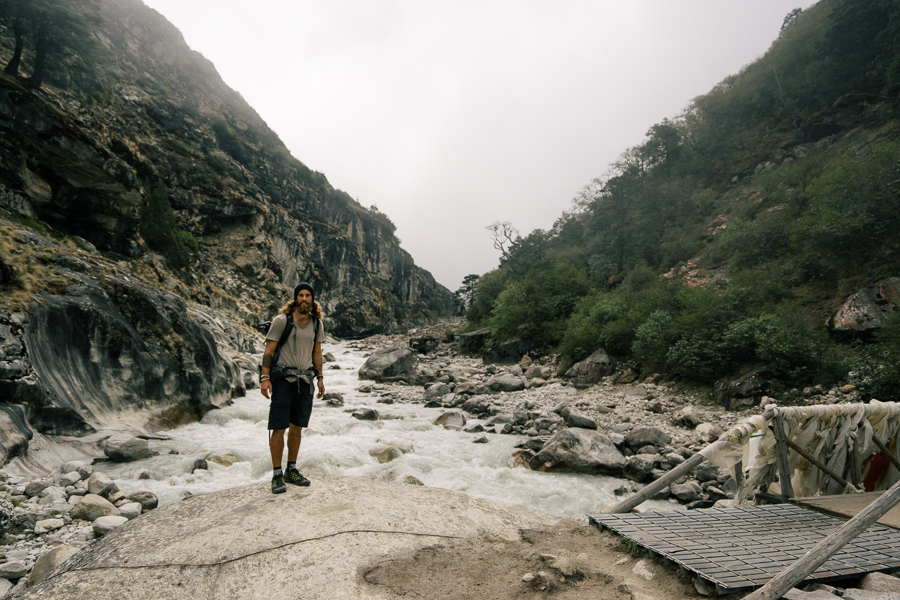 Luckily, the first day consisted just a 3-hour trek to Phak Ding. My body had begun to recover but my head and stomach were still in terrible shape. We were now already at over 2000m above sea-level. That’s more or less the same height as the tallest peak in Australia, Mt. Kosciuszko.

I went straight to bed in Phak Ding and aside from eating meals, I was bed-ridden for the next 40 hours. It’s important to note at this point of the recount that many people get heli-rescued every day on the trail. It costs between $3k-5k and usually insurance covers it.

Lapsang and I had agreed on the second night in Phak Ding, that if I was still sick in the morning we would try and walk back to Lukla and return to Kathmandu. I was shattered but pushing on meant that a heli-rescue would become more and more likely if I was unable to trek out. At least in Phak Ding I was only a 3-hour walk from the airport.

I had accepted defeat as I went to sleep that night in Phak Ding, although part of me held on to a glimmer of hope that my body would give me a chance to at least give a valiant effort of continuing.

I woke the next morning after a night of interrupted sleep, I had my appetite back but my head was still aching. I managed to eat breakfast. Lapsang looked at me and I said, “Let’s go to Namche.”

My body continued to improve throughout the day despite our trek taking us to over 3000m elevation. I was so stoked that my body had given me a chance to continue. I hate quitting and now I didn’t have to. 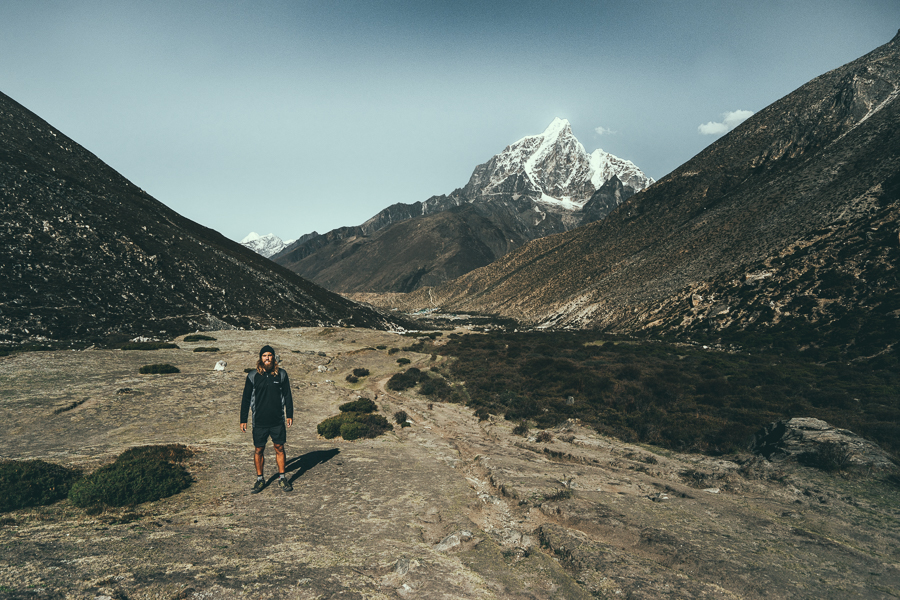 We crossed 5 or so hanging bridges, one of which is the 2nd tallest bridge in Nepal. I began vlogging the trip, which I can’t wait to share with you all. We dodged donkey, yaks and the shit they left all over the trail. I couldn’t wipe the smile off my face as I began to feel like myself again. 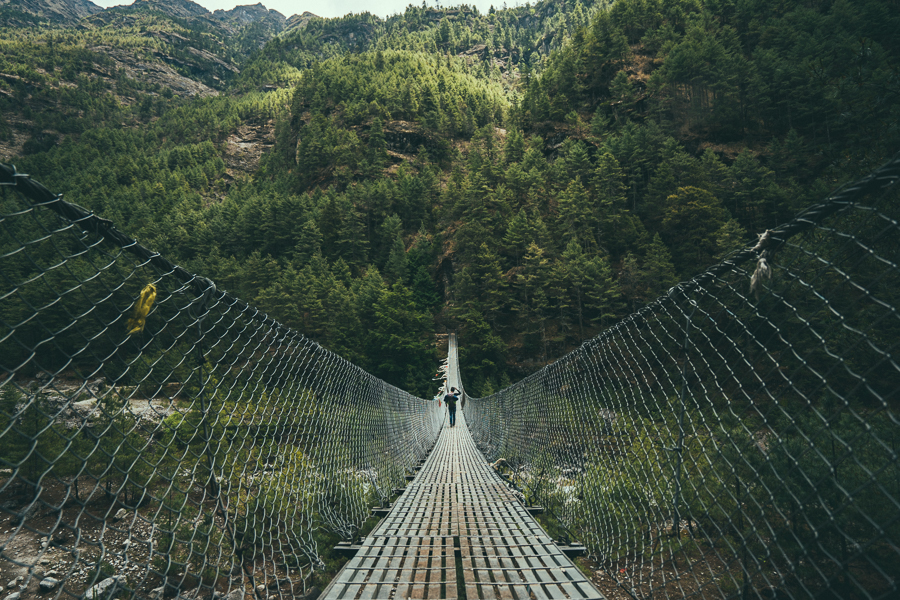 We arrived in Namche and I felt so stoked I went out to explore even more. That night I had mild altitude sickness, which I won’t recount for your own benefit. However, if I could walk I was happy.

Up until lunch the next day I was fine. Still smiling ear to ear about my miraculous recovery. It was after lunch that my second hurdle hit me right between the eyes. We were going to trek up a mountain and gain over 600m of elevation in an hour. The altitude killed me. It isn’t a fitness issue. Altitude just hits people at different times depending on a number of factors. 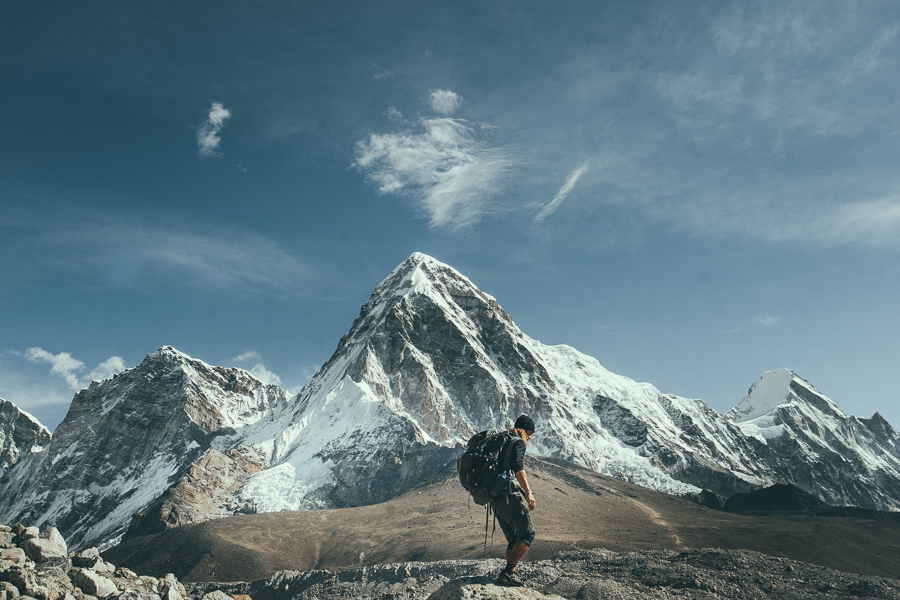 When I reached the top of the hill after over 90 minutes. I could hardly concentrate, I remember panting towards the camera with relief as I tried to continue the vlog. I look forward to watching that back in the coming days. High altitude sickness isn’t something you mess with. If you continue to go higher, you can get brain swelling and do brain damage. Normally, I am the guy who says screw it what’s the worst that could happen. Well the answer is your brain could swell and you could die.

I had a horrible night spending more time in the bathroom than my bedroom, once again thinking my trip was over. The options were to either head down in the morning or wait a day in Tengboche and hope I adjusted. I was convinced again that the trek was over for me. This time a helicopter seemed more likely than trekking out. Not even a few bowls of garlic soup could oxygenate me.

The next morning my head pounding, I made the decision to go for it. Once again brave, stupid? Probably both. Definitely both.

There were moments that morning I thought I was in trouble. The pressure on my head didn’t reduce and it got slightly worse. It never reached a point where I thought I was going to collapse but I felt weak as I ever have. 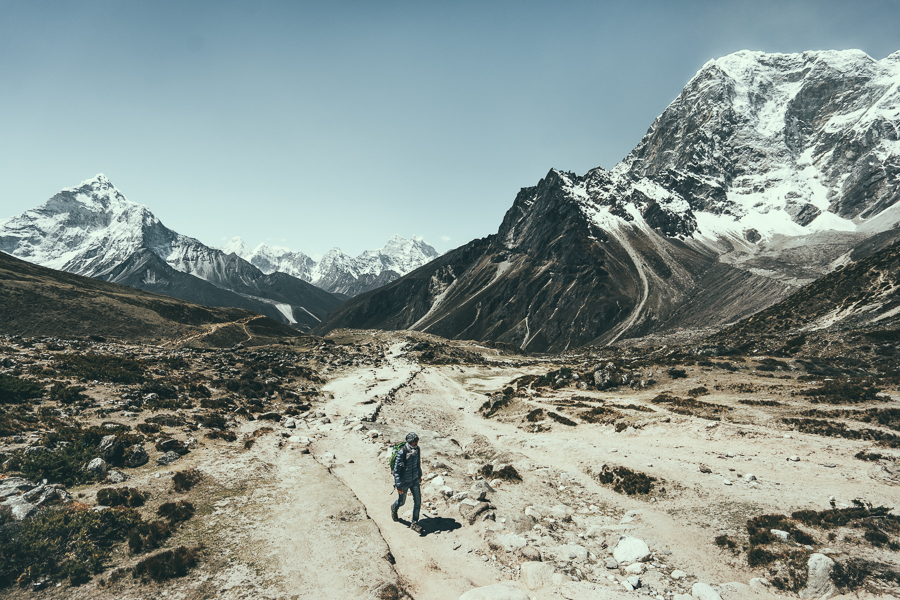 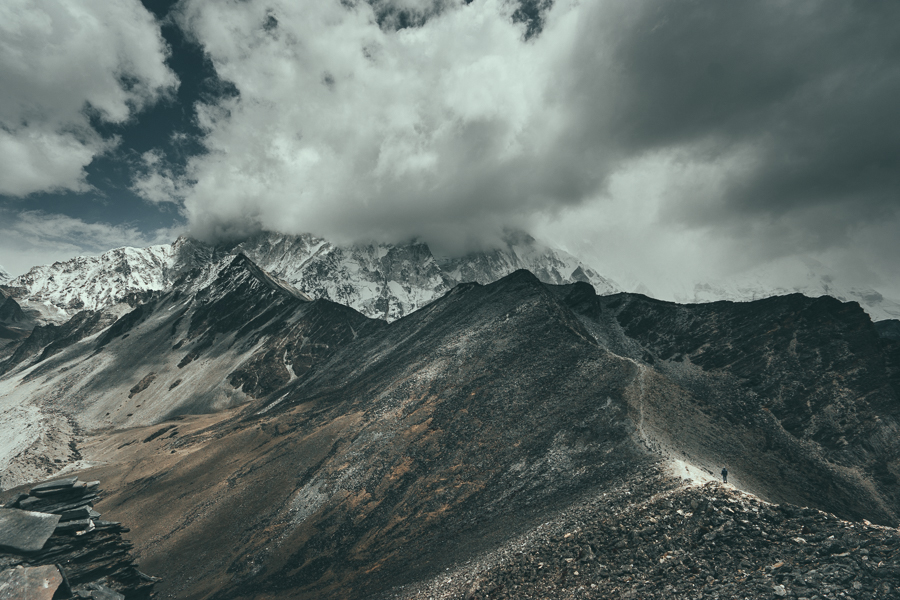 We reached Dingboche another small town and I was stoked once again to still be on the trail. My head still pounding, I began to wonder if it would ever stop.  We still had over 1500m of elevation to gain before reaching base camp and 3 days of trekking.

Lapsang decided it would be good to have a trekking day instead of a rest day in Dingboche. We would summit Chukung Ri. It was a gain of 1000m. I was once again thought I was toast. However, somehow this trek got rid of my altitude sickness and it was one of the most amazing views of my life. We didn’t see a single other person all day other than when we were served lunch at the tea house. We screamed at the top of our lungs from the summit, just to prove that we were all alone in the middle of nowhere.

This is a photo of my crazy, legend of a guide. A genuine guy with a crazy backstory and someone I am stoked to have been able to hang out with for 12 days. 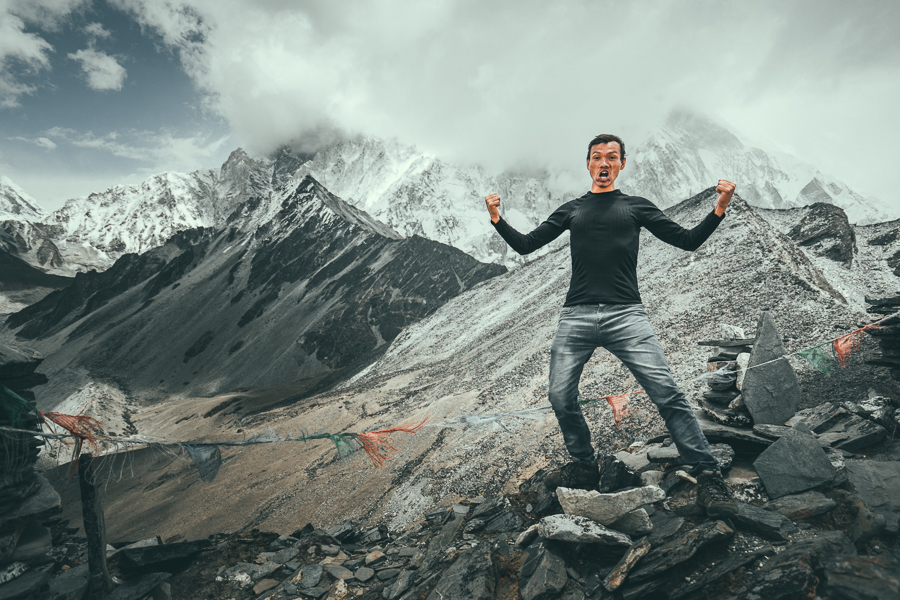 From that summit onwards I had no trouble with my health and was ever confident of making it to Everest Base Camp.

What have you missed in the last month? Here are the last four edition’s of ‘The Weekly’:

THE WEEKLY #46: PREPARING FOR EVEREST BASE CAMP

THE WEEKLY #44: CRUISIN’ IN THE CARIBBEAN

THE WEEKLY #43: YOU BETTER BELIZE IT