The Gili Islands are definitely worth exploring. Breathtaking beaches, awesome coral reef snorkeling, and the simple laid back vibe make up the perfect secluded island experience.

This week we set off to explore the Gili’s! The Gili Islands are three small islands just off the northwest coast of Lombok, Indonesia. We’ve heard a little bit about them and seen enough Instagram pictures to decide that this was something we definitely wanted to do during our month of travel in Indonesia.

Each island is known for something different:

We decided to start on Gili Meno, then later decided to end our last few days on Gili T for the amazing sunrises and sunsets that it is supposed to offer. Getting to the Gili’s can be a bit of an uncomfortable experience. The cheapest and best way to get to the Gili Islands is by fast boat. There are many sites online boasting of the cheapest prices at upwards of $150 per person. However, we have an awesome friend named Wayan who helped us to get return tickets and transport to the harbor for $46 per person.The fast boats all take off from the same harbor and dock so when you check in they put stickers on you that show which company you’re with and what island you’re heading to. It feels a bit like the first day of summer camp with the name tags and color coded groups. 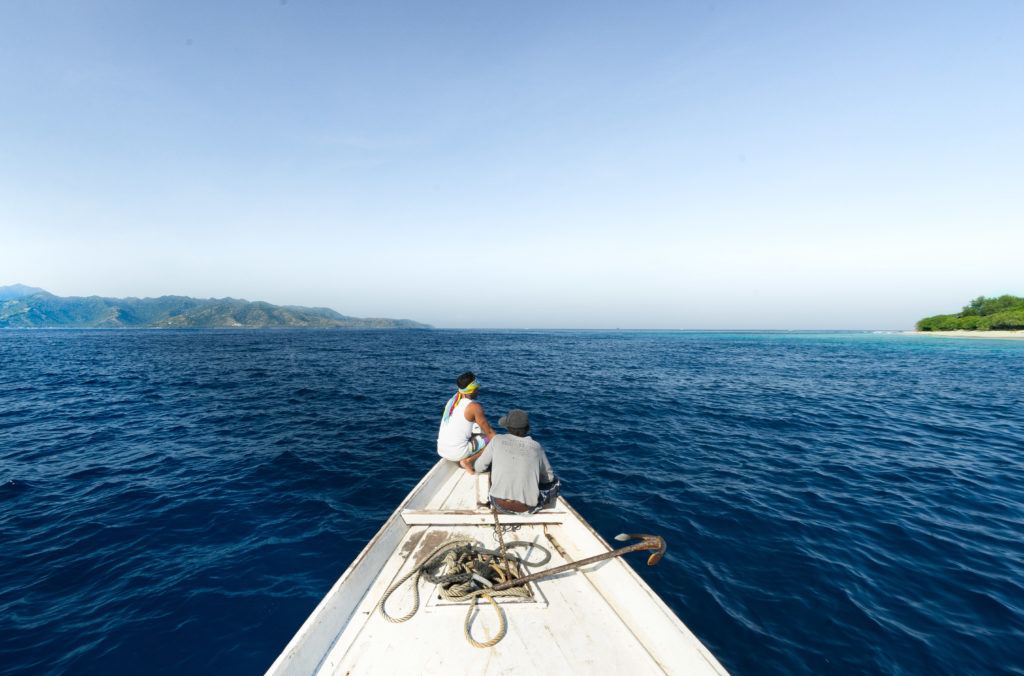 We walked to the middle of the small island to our accommodation. It didn’t take us long to discover that the reviews of the island were not joking when they wrote about salt water showers, constant power blackouts, and the 5am wake up calls of roosters and morning prayer calls. The local people were all so friendly though, and it was nice to take a step back from the internet and social media and enjoy the island and each others company. 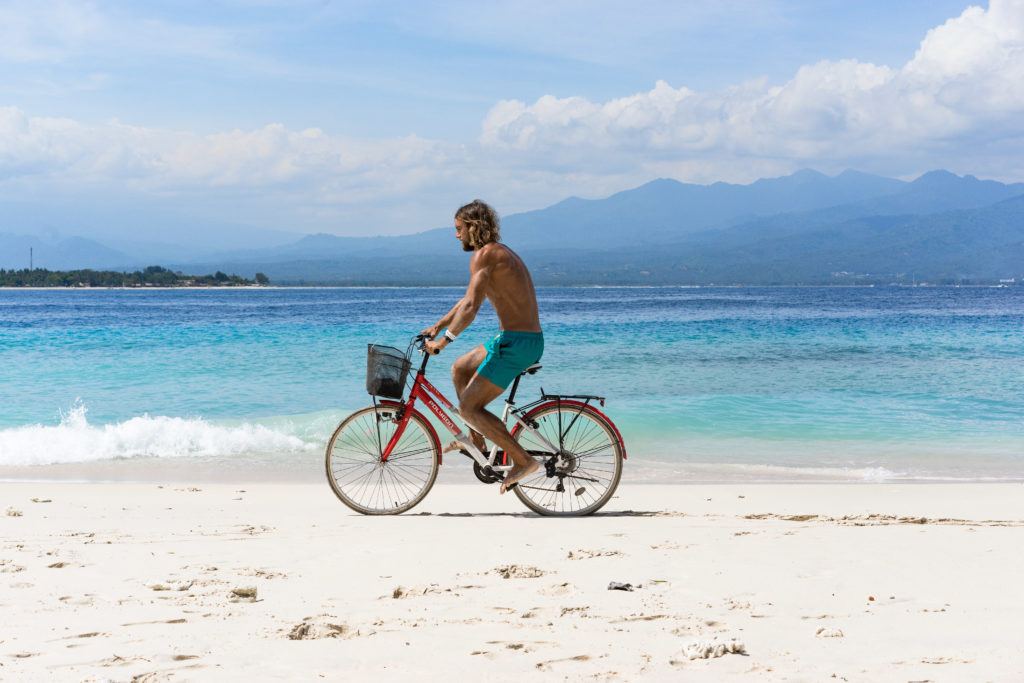 Over the next 4 days, we rented bikes, spent hours relaxing on the beach, swam in the ocean, watched some amazing sunsets,and shot photos for a few of the brands we work with. On the third day we spent $38 for a private boat and snorkel tour.

The snorkeling here definitely lives up to its reputation! We saw turtles, a shipwreck, underwater bicycles. We also had fun playing like little kids in the bubbles that rose to the surface from Scuba Divers exploring the ocean floor below us. It was during this snorkel session that I got my first jelly fish sting! 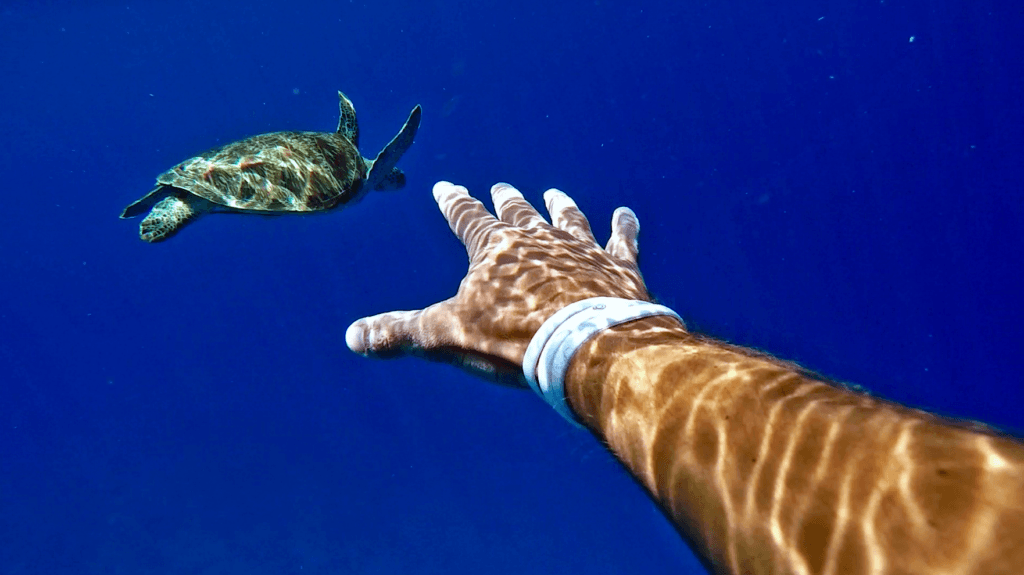 One of the coolest things about the Gili Islands is that you just have to make a purchase at a beach hut then you can hang out in their beach chairs, beach huts, or on their bean bags for hours. We definitely took full advantage of this and often chose to buy a $2-3 juice in exchange for a day on a comfy chair and sun umbrella.

After an amazingly rejuvenating few days on Gili Meno we decided to head to Gili Trawangan, not for the parties, but for a change of scenery and the photos! Within the first few hours of walking around we quickly saw how much of a party island this was!

We spent a few hours working at a resort with a popular restaurant called Scallywags (they have great wifi) then found accommodation at a homestay, which was only a five minute walk from the harbor and city/central area of the island. We found the local people here to be just as friendly, and Jackson even found some guys to play soccer with! I also found a few health food restaurants that offer delicious gluten free and vegan options! In addition to hanging out on the beach, snorkeling, and going to Scallywags to work, we’ve also done a little exploring.

Gili Trawangan has a small hill that we decided to hike for sunset, however the trail proved to be tricky to find, especially in the dark. After 20-30 minutes of trying to find our way through the spooky pitch black woods we decided to try the hike later in the day. We opted to watch sunrise on the beach instead and I did some yoga while Jackson took a time lapse.

Gili T is the home of the notorious ocean swings so later in the day we walked the 30 or so minutes to the west side of the island and hung out there for the day. We found an awesome beach bar with pool, table tennis, and other games so we got a few drinks then enjoyed the day there. A few hours before the sunset we set off in search of the swings. We are used to seeing a photo of a beautiful waterfall or beach and then when we actually see it in real life, finding it overrun with tourists but this was crazy!

We were shocked to find that there are 8 ocean swings! Two beach bars with 4 swings each. Despite our disappointment, we couldn’t pass up the photo opportunity and got a few shots as the sun was setting.

All in all this has been another incredible week! The Gili islands were a lot more expensive than we expected and the spending quickly added up but the experiences we had were more than worth it! Now we’re enjoying our last day on Gili Trawangan before we head back to Kuta for a few days, then we are off to Vietnam! 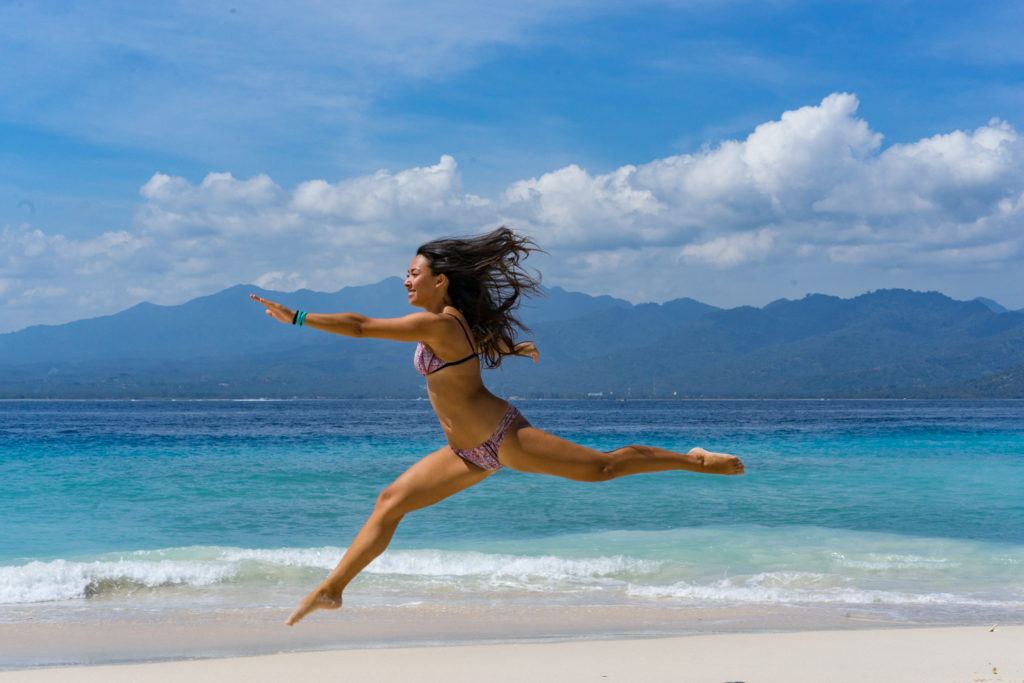 Click here to check out what we got up to last week as we immersed ourselves first in work, and then wellness!