The final block of Switzerland had arrived. After the first block of 45 days with Josh and then my second block of 21 days solo, I know I had one full month to explore east and central Switzerland.

I touched down in Geneva after flying back from Tunisia and took a train straight to Engelberg. I’d visited this region earlier on in my Switzerland trip, all the way back when Josh and I were exploring. Peter from the tourism board of Engelberg was a great guy and we had a great time previously. I had stayed in touch with him and he invited me back for a few days, which was great as there were still a couple of hikes I was keen to do in this region. Someone had recommended the Rugghubelhutte mountain hut to me and that was my main goal for this stint in Engelberg.

Peter organized everything and even put me up in a hotel in downtown Engelberg in between the mountain hut hike. The weather was a bit touch and go but the day for the hike to Rugghubelhutte looked good at least.

The hike up was fantastic albeit through a lot of fresh snow towards the end. At the mountain hut, I witnessed an incredible red sunset and then the sunrise somehow managed to top it the next morning. 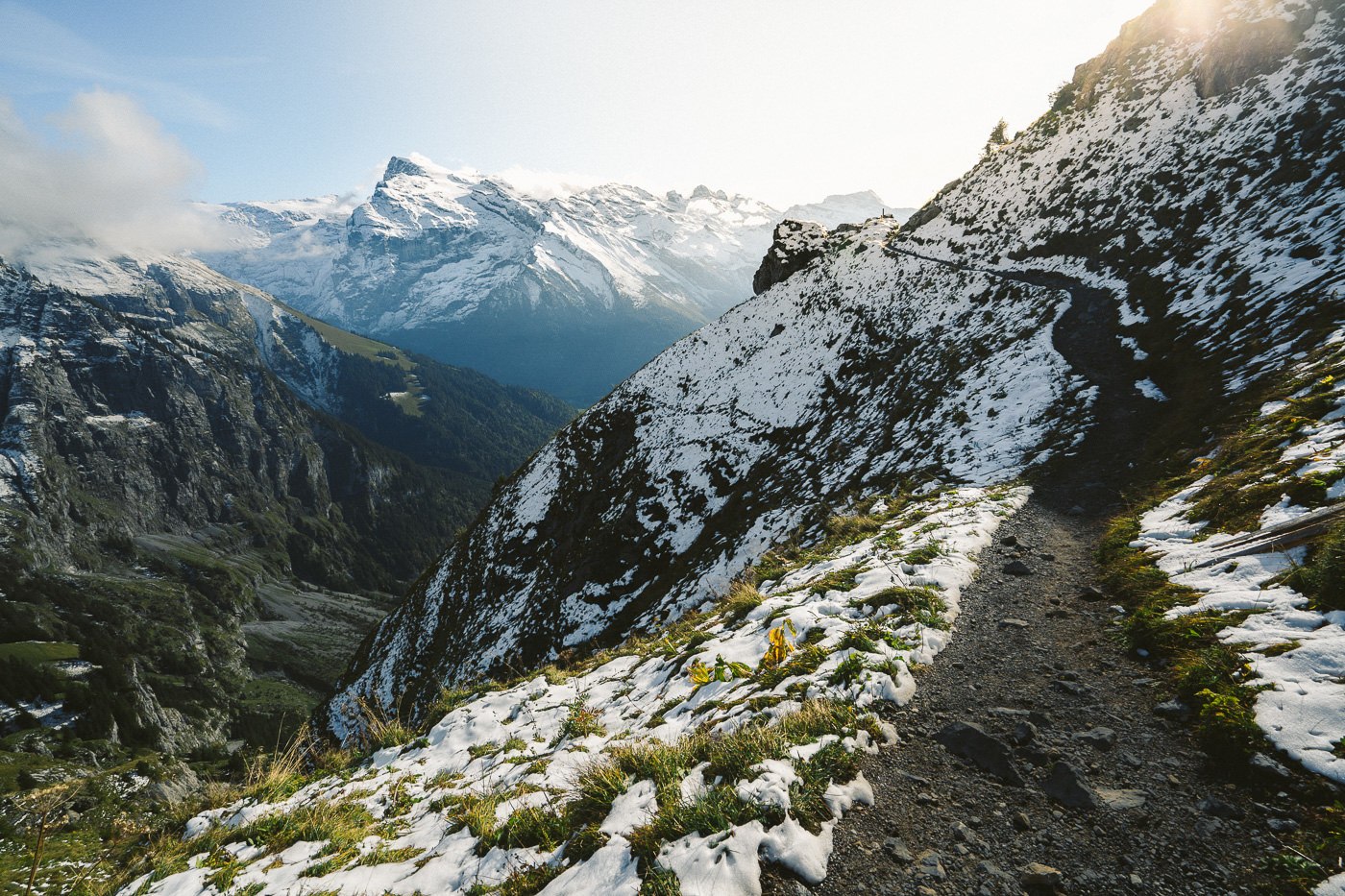 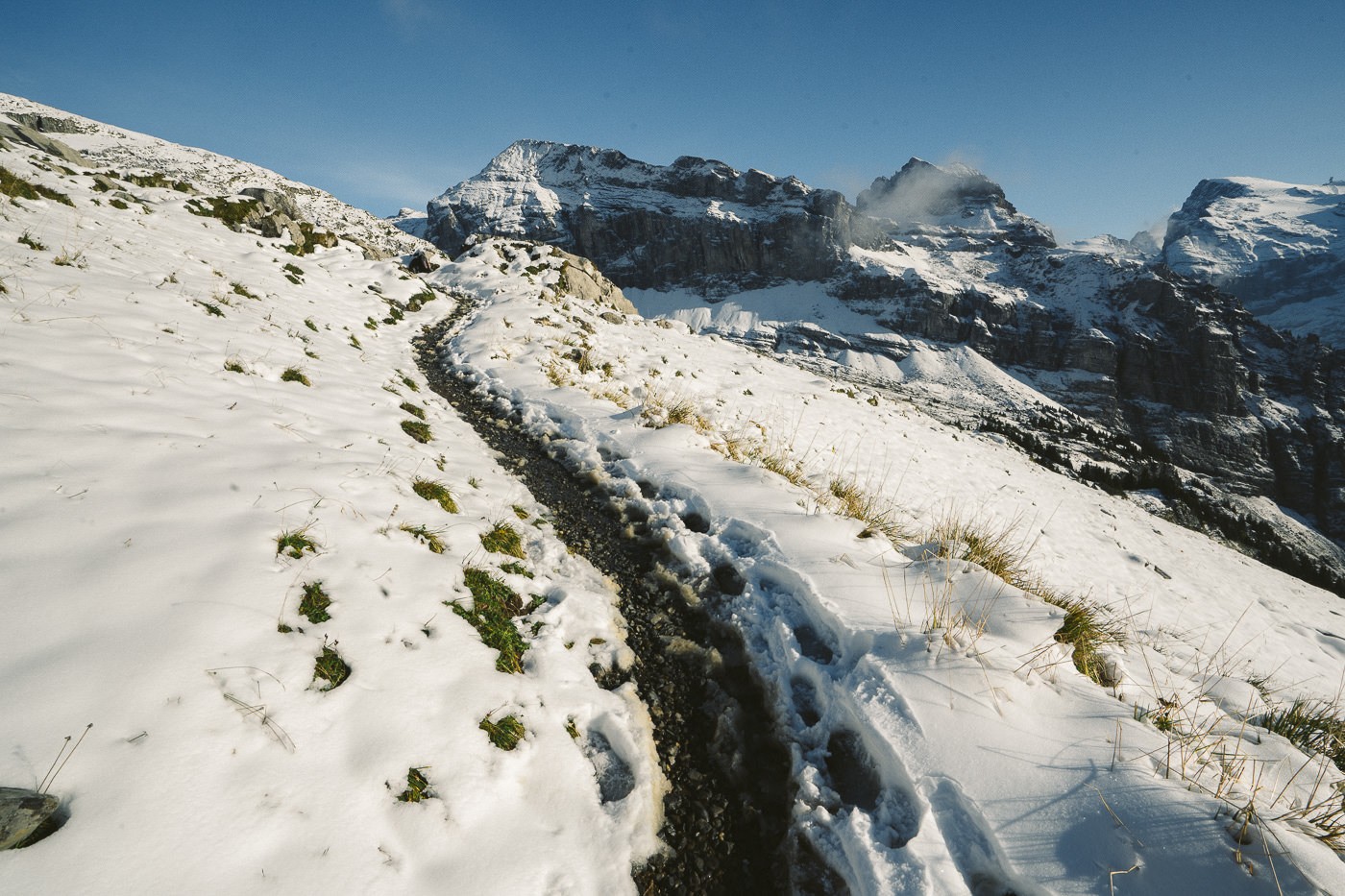 After breakfast, I had some decisions to make. I could head back down the same way but that is one of my least favorite things to do so I was looking for an alternative. My other option was to head up to Rotgratlipass and then hike down to Bannalpsee. The weather seemed okay and I actually set off in shorts assuming I would get hot after a few minutes.

To read the full blog post and see all the photos you can click here: ‘RUGGHUBELHUTTE’ MOUNTAIN HUT HIKE 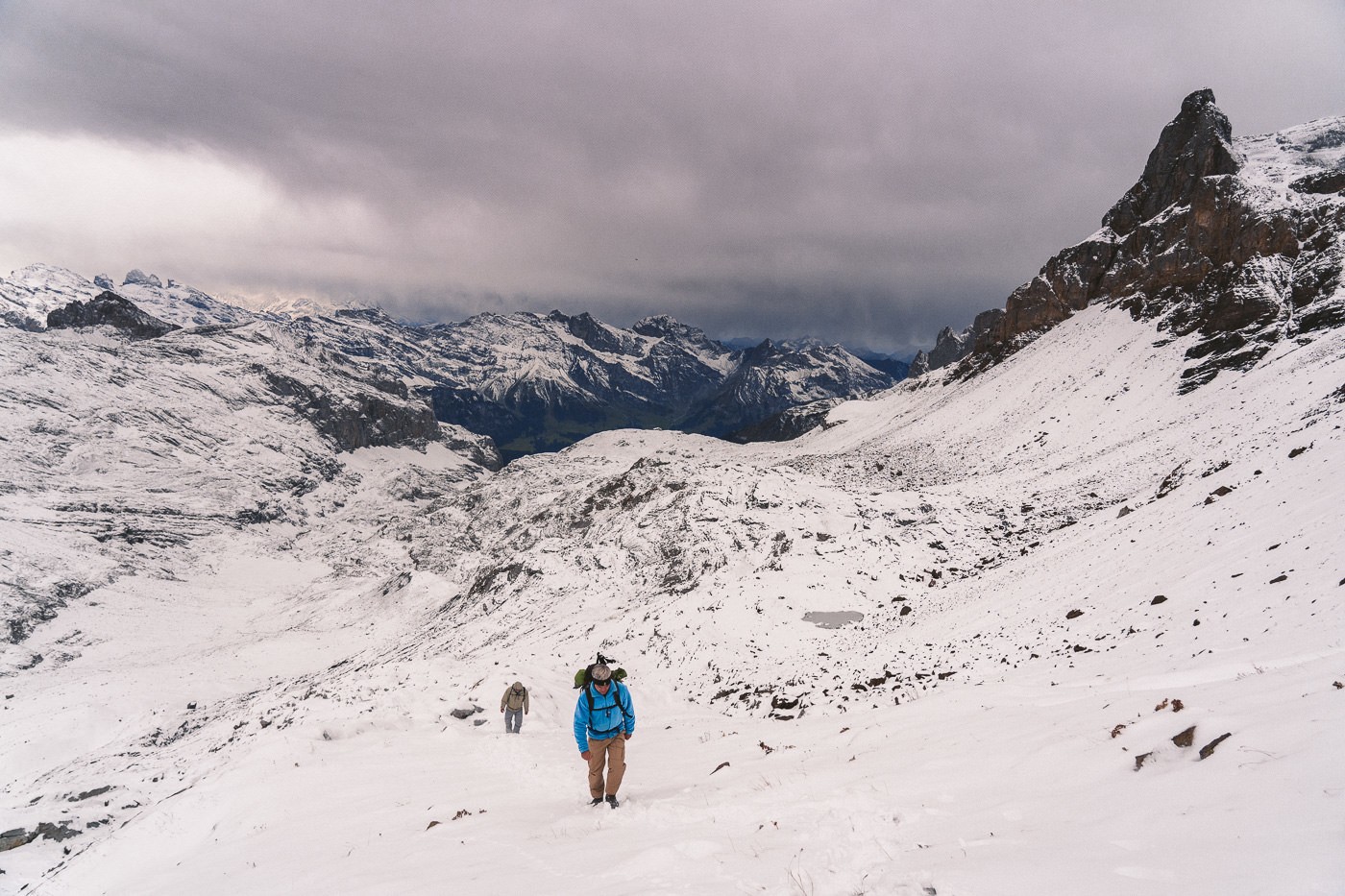 From this moment on I put my camera away as it was snowing and often incredibly windy. At one point there was a snowstorm for about 15-minutes and I thought if it sticks around we are in big trouble. Nevertheless, I trusted the Germans who had trail-finding experience. I kept close and followed their footsteps. It was really my first snow hike and I was a little underprepared gear wise but it was also a bit unexpected. For my first snow hike, it was like being thrown into the deep end. Speaking of deep, my knees were often beneath the snow as we ‘found’ the trail.

Starting the hike down from Rotgratlipass

At times, I was pretty nervous with steep drop-offs and heavy winds but thanks to my German friends, we made it through the trail before the worst of the weather came. It was 10km’s from Rugghubelhutte to Bannalpsee via Rotgratlipass and took us 3.5 hours but in dry conditions, I could imagine this being no more than a 2.5-hour route.

Despite the conditions, it was a beautiful route and on the day we explored this region, it felt like a true adventure. 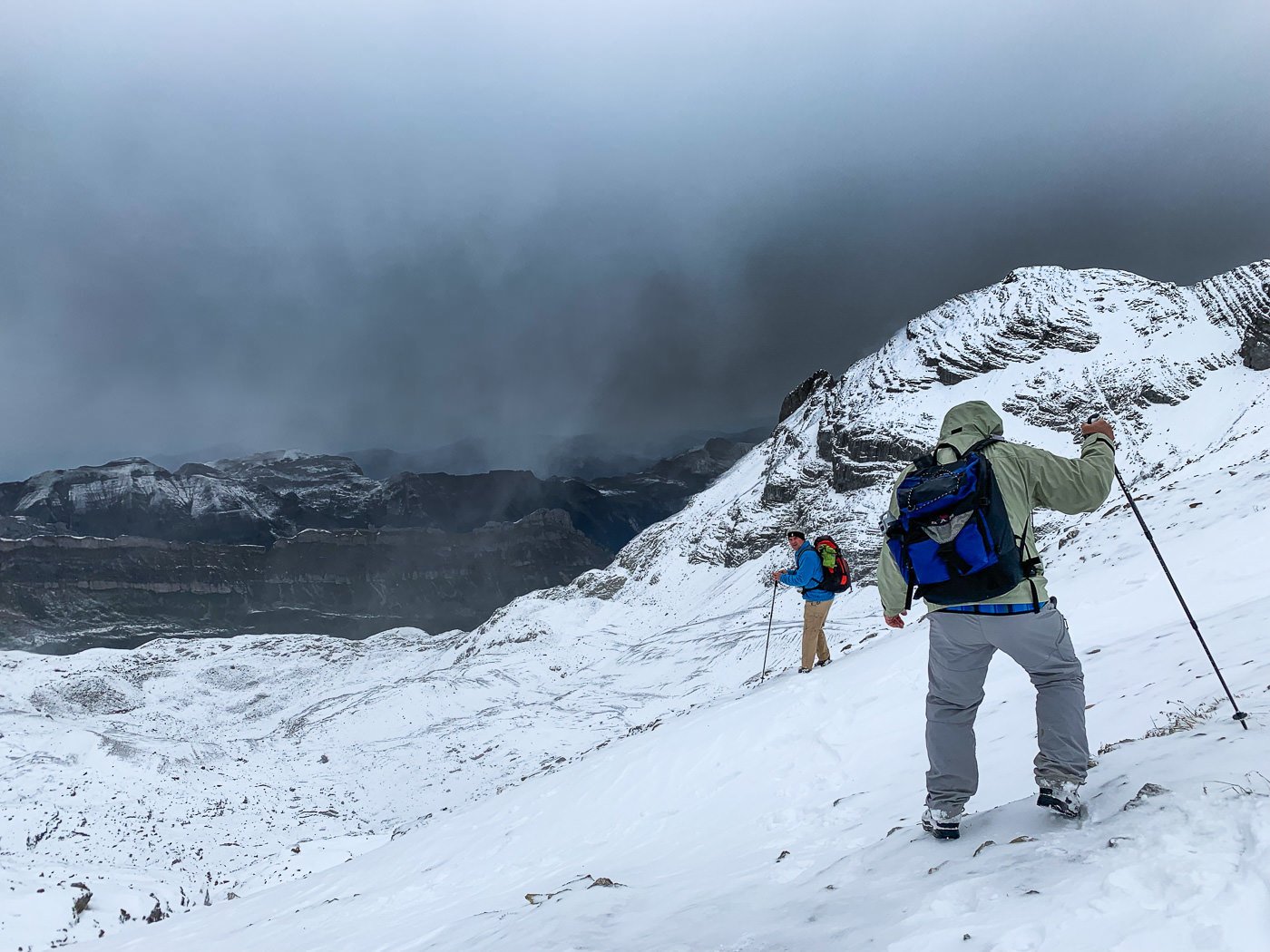 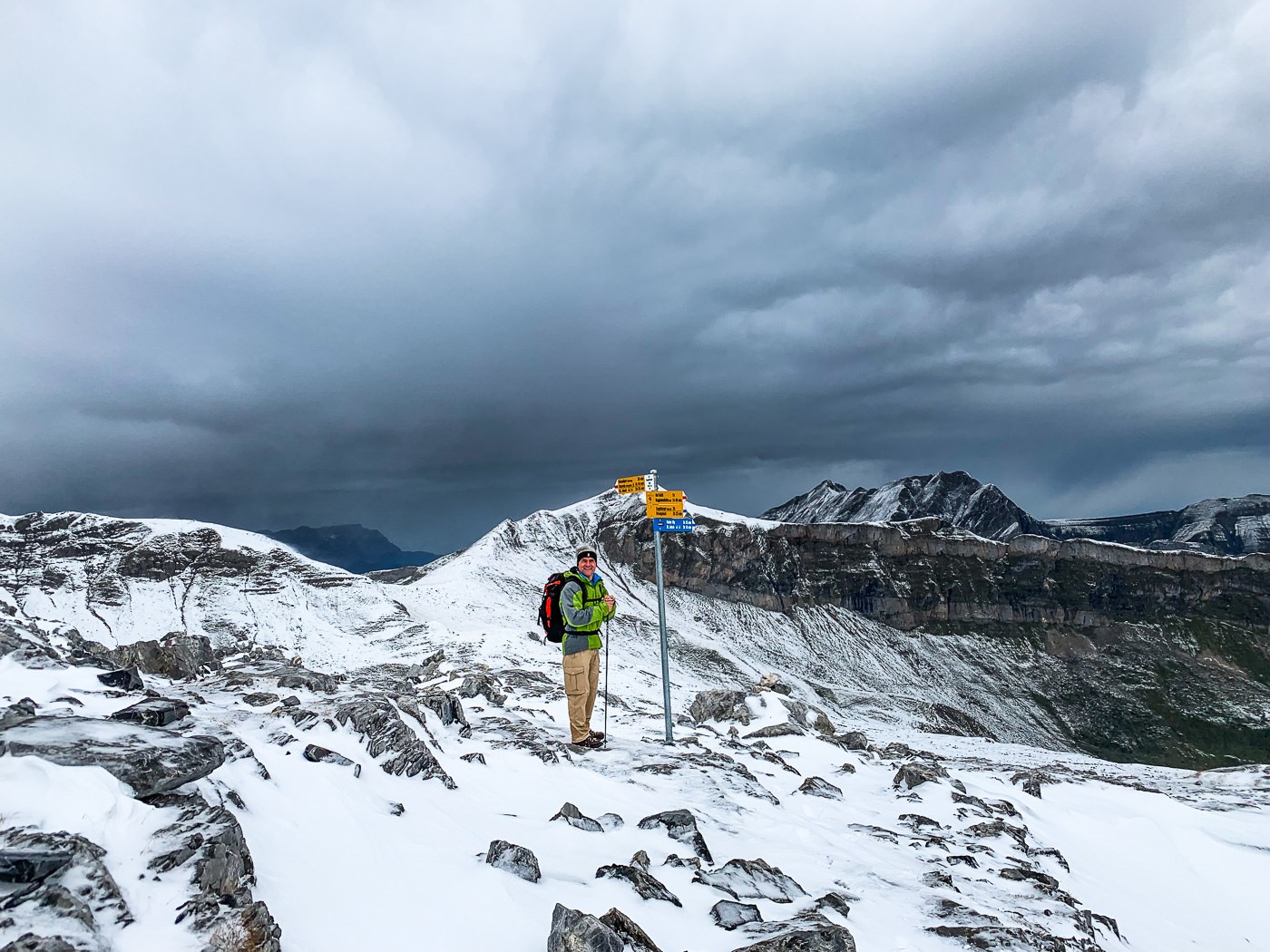 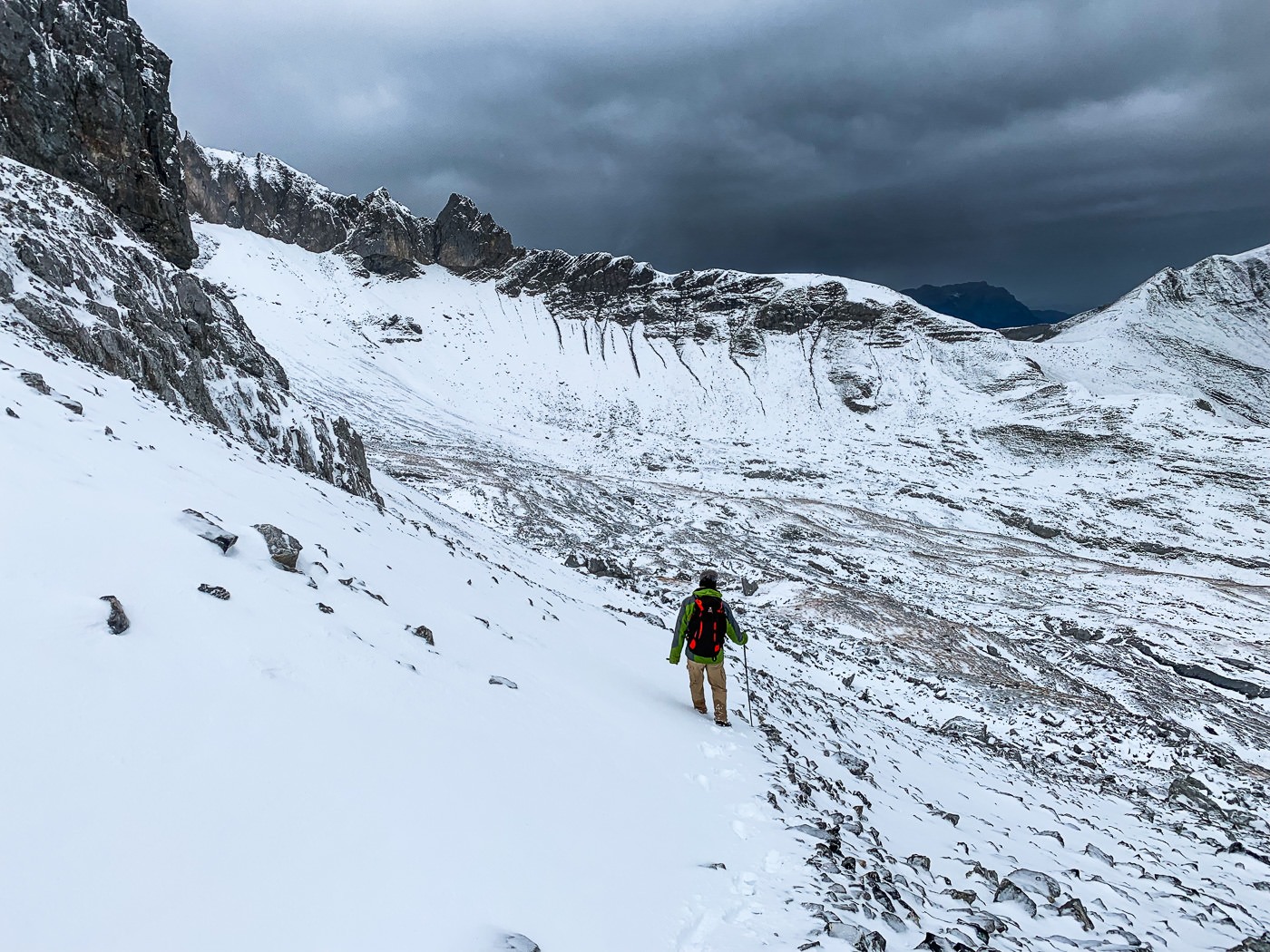 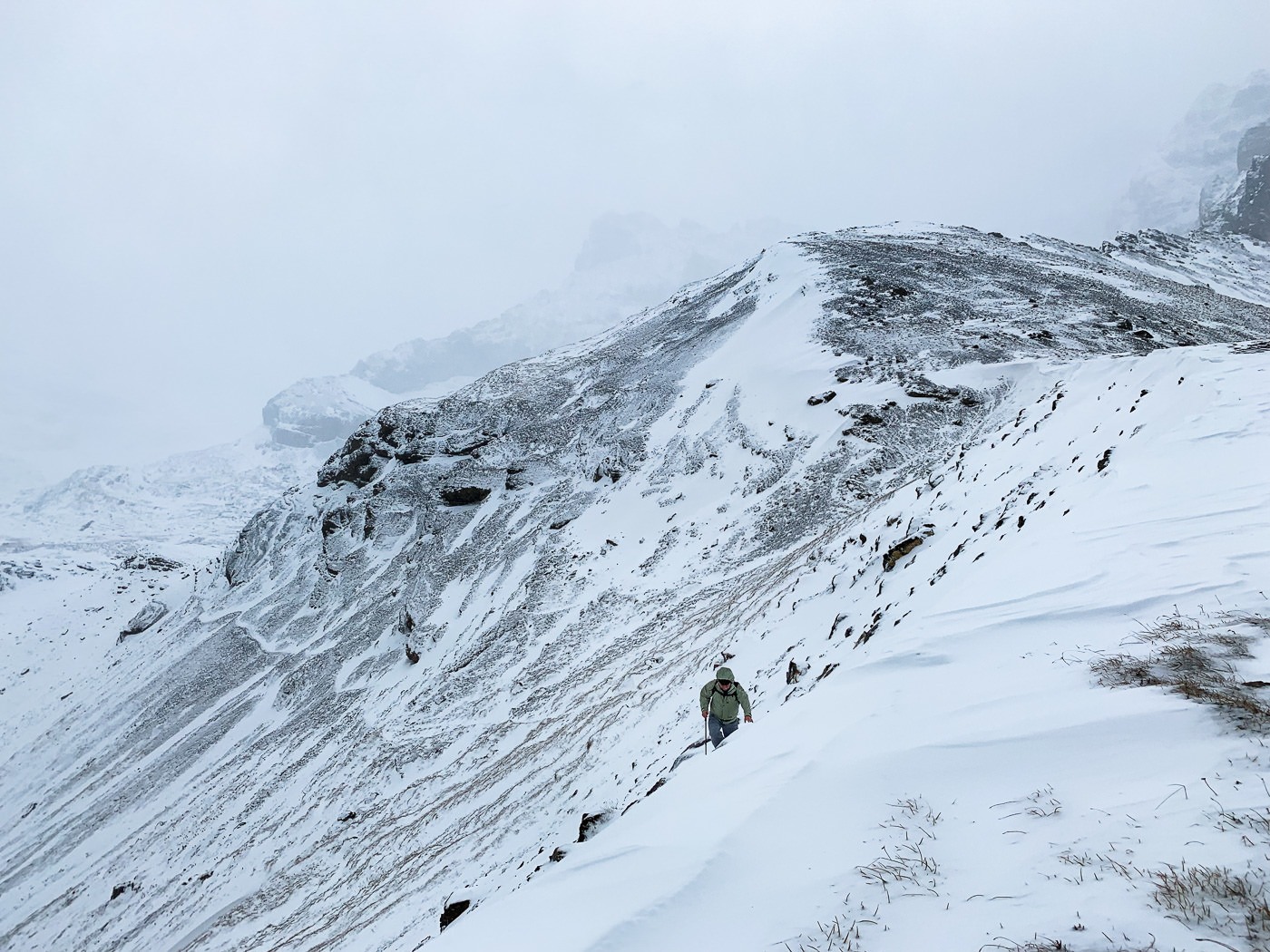 I filmed this video from the Rugghubelhutte at sunset and sunrise although most of the good footage was during the sunrise. The drone struggled for connection over the ridge but for the most part, was great.

These are amazing photos...