Tegal Wangi is a sweet little stretch of coast in the south of Bali. Tourists have probably never heard of it but it’s definitely a hangout spot for locals who flock to the cliffs each night for sunset. I found Tegal Wangi Beach in Bali while I was looking for places to cliff jump. It turns out that this is one of my new favorite spots to hang out in Bali! I ended up writing this Ultimate Guide to Cliff Jumping in Bali.

Where is Tegal Wangi Beach

Tegal Wangi Beach is in the south of Bali, near the popular region of Uluwatu. From Kuta, it takes about an hour and a little longer from Seminyak and Canggu. I suggest driving on a moped if you are comfortable doing so. The traffic can get kind of crazy and if you are in a car it may take you double the time to reach the south.

We combined our day trip down south with a visit to Balangan Beach, Jimbaran Point, and Uluwatu region to make the drive worth it. Below I have placed a Tegal Wangi Beach Map with the exact pin location. There is a parking lot that has locked fences. If they are open be aware that the people selling drinks inside will try and charge you to park your motorbike when you leave. It’s only 2000 rupiah but they won’t let you know until you are leaving.

Tegal Wangi Beach is a popular sunset cliff spot for tourists. There are actually a lot of epic Uluwatu beaches but not many people know about this little cliff jump spot.

A small stairway leads down onto the beach, which feels almost like a secret beach. From the cliffs, the beach seems almost hidden to those on the cliffs above. caves and boulders are waiting to be explored during low tide when the heavy swells pose no threat. I swam into the beach after jumping in and discovered a number of different caves, channels, and amazing rock formations. It would be awesome to bring your snorkel down here and explore but beware the strong currents and crashing waves.

There are several natural rock pools down in this area so if you plan your visit for a time when the tide is lower you can probably relax in these pools without worrying about waves crashing through. 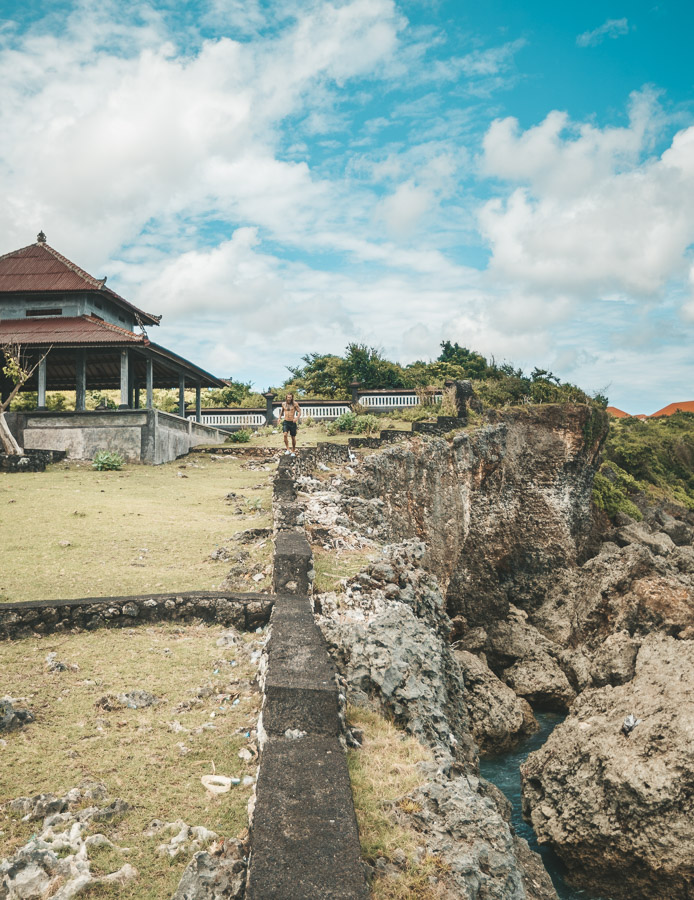 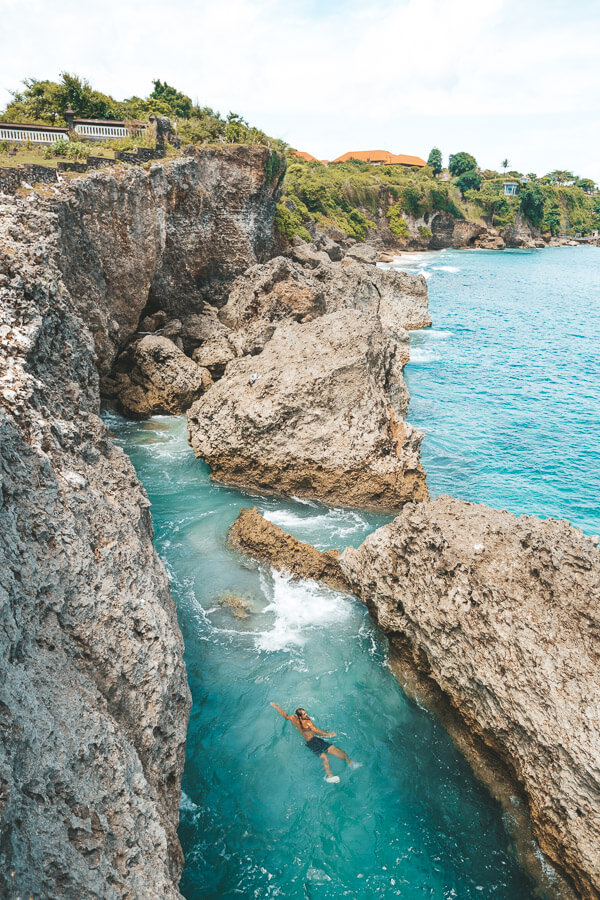 The rock channel at Tegal Wangi

There are several spots to cliff jump at Tegal Wangi. The first spot was just down from the actual beach. There is a cove that spits out mist from the crashing waves, similar to Devil’s Tears on Nusa Lembongan. The water here is crystal clear but there is pretty much no way to climb up the sharp rocks. I jumped in and began to swim around the coast back to the beach to climb up. This is when I discovered the beautiful channel. Here I did a depth check and discovered it was quite deep. I climbed the island rock and made another cliff jump here.

Finally, I swam further down the coast and discovered a huge cave but it was hard to enter because of the crashing waves. By this time, I was getting tired and decided to clamber out of the ocean and scale my way back up to the top of the cliffs on a bit of a goat trail I found.

Make sure you check the depths before you jump as the depth can change and sand and rocks can move around from one day to the next. 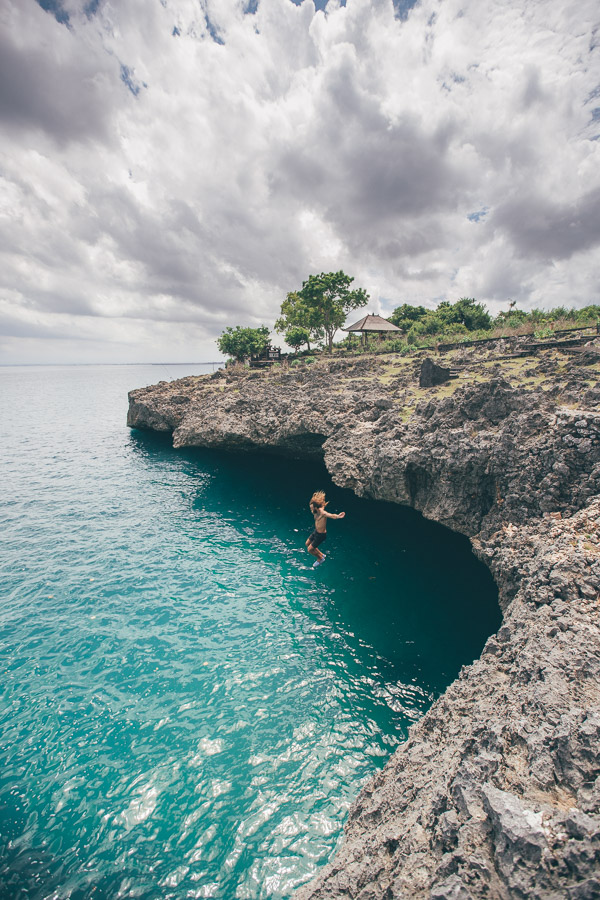 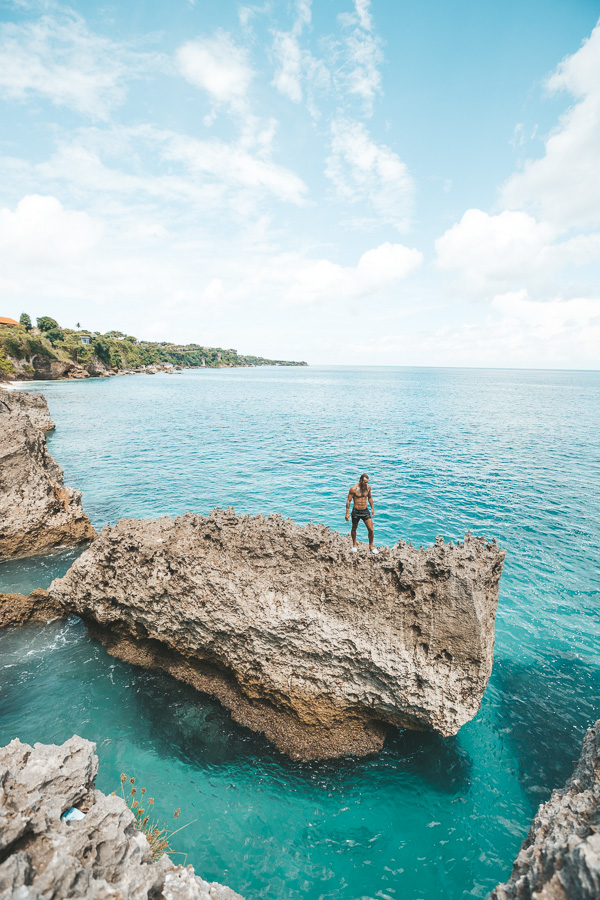 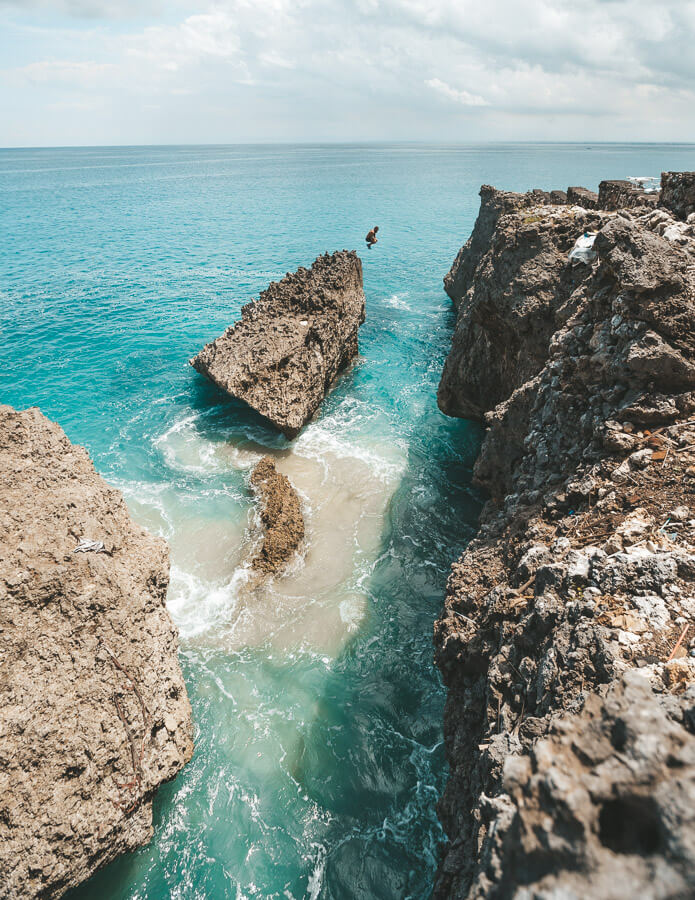 TEGAL WANGI BEACH BALI - The Complete Guide with many tips!

[…] Our friend Jackson Groves has a blog post specifically about cliff jumping at Tegal Wangi beach. Read it here to find out about all the details for the best cliff jump spots at this beach. Most important is […]

View of Bali | The most Instagramable spots in Bali: feeds to blow your mind

[…] you a fan of jacuzzis? You are going to love Tegal Wangi Beach! Not only is it a stunning beach, very Instagram-worthy with limestone rocks, caves and a white […]