There is no shortage of epic waterfalls on Tablas Island, Romblon. I visited these four waterfalls in one epic day while staying in the north at Footprints Beach Resort in San Andres ($8 per night for bunk bed in dorm room right on the beach!) We rented a motorbike for the day from the resort for 500 pesos and headed off to the nearby Mablaran Falls first before journeying to San Agustin and Bachawan to reach the other waterfalls on Tablas Island.

There are several other waterfalls on Tablas Island such as Mainit Falls and Garing Falls in Odiongon. I didn’t visit those during my trip as I was told they were a bit low on water during the summer. But keep those in mind if these four don’t satisfy your cravings for waterfalls!

The first waterfall we visited was Mablaran Falls, which seemed to be a local favorite. We arrived early in the morning but even at 9 am, the place was becoming crowded with local families set up for a day of BBQs and family fun time. To enter Mablaran Falls, the entrance fee was 10 pesos according to a hand-painted sign. That’s 20 US cents.

Mablaran Falls is more of a hangout spot than an epic waterfall. A small waterfall pans into a large pool. The main attraction at Mablaran waterfall on Tablas Island was the rope swing. Kids took turns swinging on a vine and launching into the water. It wasn’t a man-made rope like most swings, it was actually a vine, which was super cool. We joined in with the kids as they showed us their four stacker rope swing tricks and enjoyed making fun of my Tagalog.

Lots of families brought bbq’s, snacks and alcohol ready for a big day. We were the only foreigners in the whole joint but as always the locals made us feel welcome.

Mablaran Falls was the least impressive of the four we visited all day but I think we had the most fun here hanging out with the kids on the rope swing and joining in the family fun atmosphere.

This waterfall is on Google Maps if you search ‘Mablaran Falls Tablas’, which I have provided below: 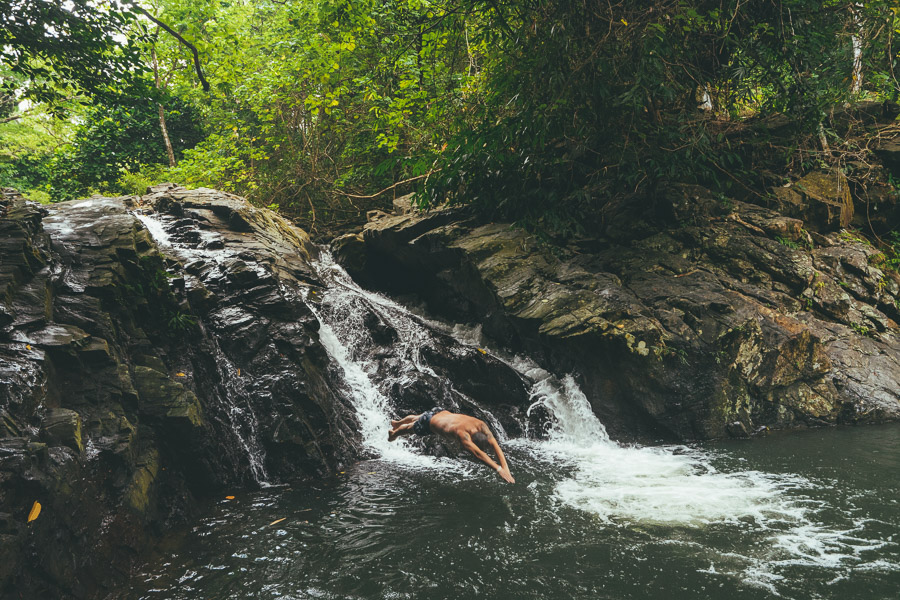 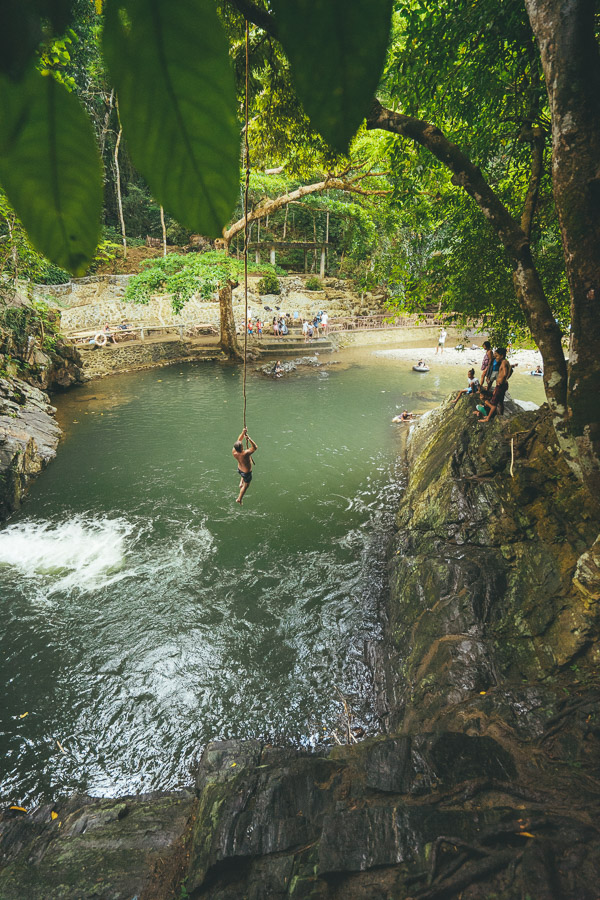 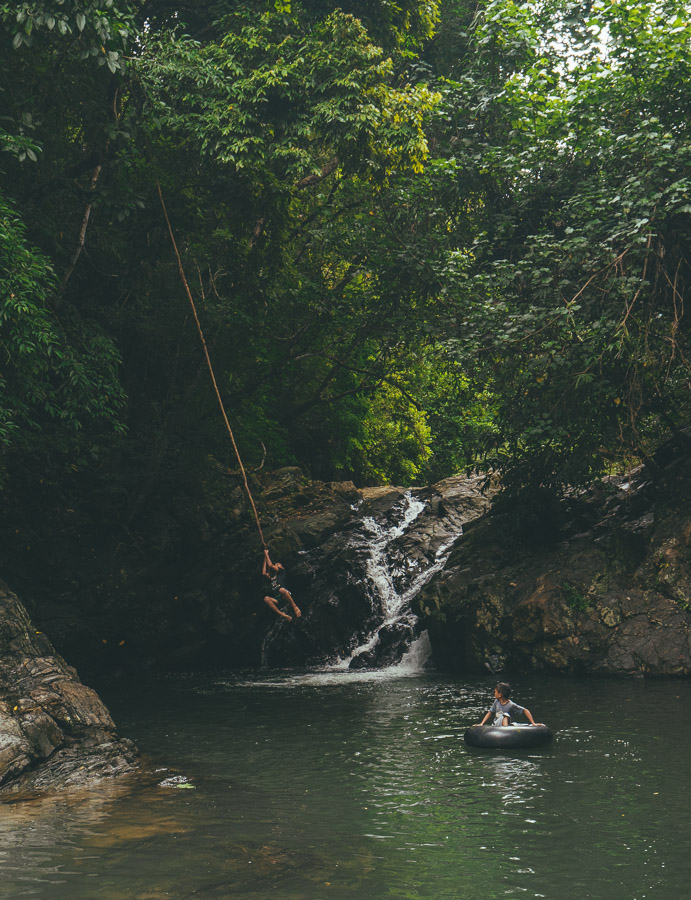 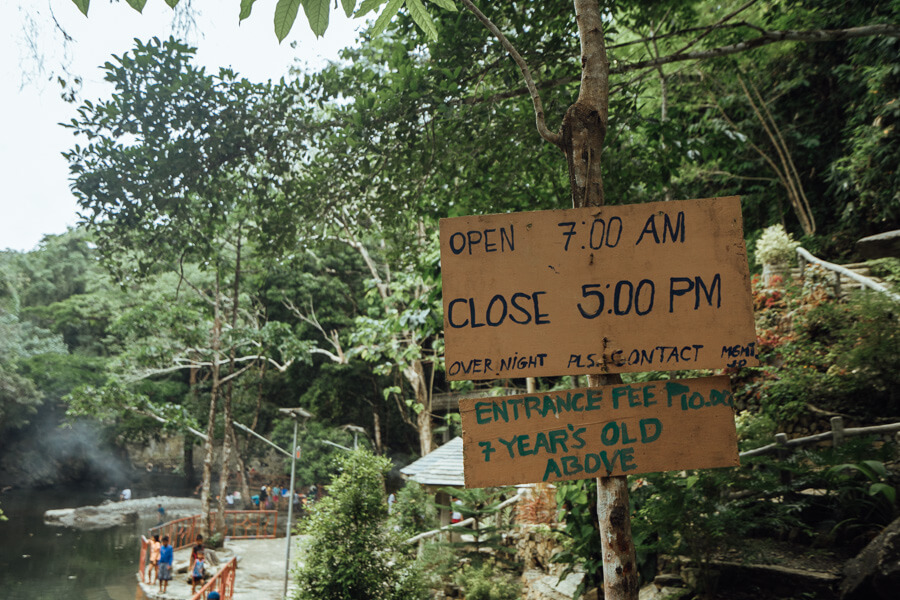 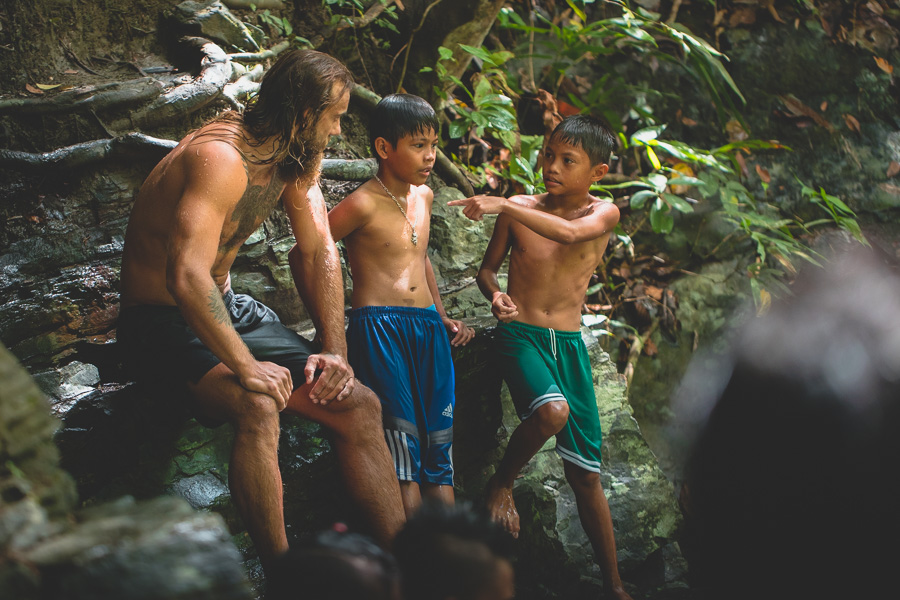 After visiting Mablaran Falls, we jumped on our back and cruised along the coast to San Agustin. Here we stopped for lunch at a local cafe and had pork adobo with rice for $1.20 USD. There were no signs to any of the waterfalls so I relied heavily on asking locals for directions, which is a much better way of meeting people anyhow!

From San Agustin town we headed inland towards Busay Falls. The roads turned to gravel paths and we were driving through small villages. The children and even the adults yelled hello and laughed wherever we drove. We followed the Google Map pin until it finished and then asked a local for clarification and they pointed us in the right direction.

When we arrived we had to pay 20 pesos entrance fee per person, which is about 40 US cents. A small man-made pool is at the entrance and we weren’t sure what to expect. As the path leads you up past the pool, at every plateau is a little cascading waterfall. Each time we made it to the next one we wondered if this was Busay Falls!

Finally, we made it to the top and there was a beautiful waterfall streaming down. One family set underneath a shelter at a picnic table as the kids played in the water. The water wasn’t very deep and this was a much more low-key area with no rope swing or crazy activities going on. It was more of a scenic waterfall. We hung out with the family for a while before finding out there was a path to the top of the falls.

A small, steep dirt trail wound up around the side of Busay Falls and took us to the top. Here we found an amazing waterfall, far more epic than the one below! We thought it might be Dulom Falls but in fact, it was still Busay Falls. This system of waterfalls just seems to go on an on. We hung out at the top in this area for almost an hour, taking in our private little oasis! Definitely venture up here when you visit Busay Falls. For me, this was probably the best waterfall on Tablas Island because of the atmosphere in this little cauldron of a spot.

This waterfall is on Google Maps if you search ‘Busay Falls Tablas’, which I have provided below: 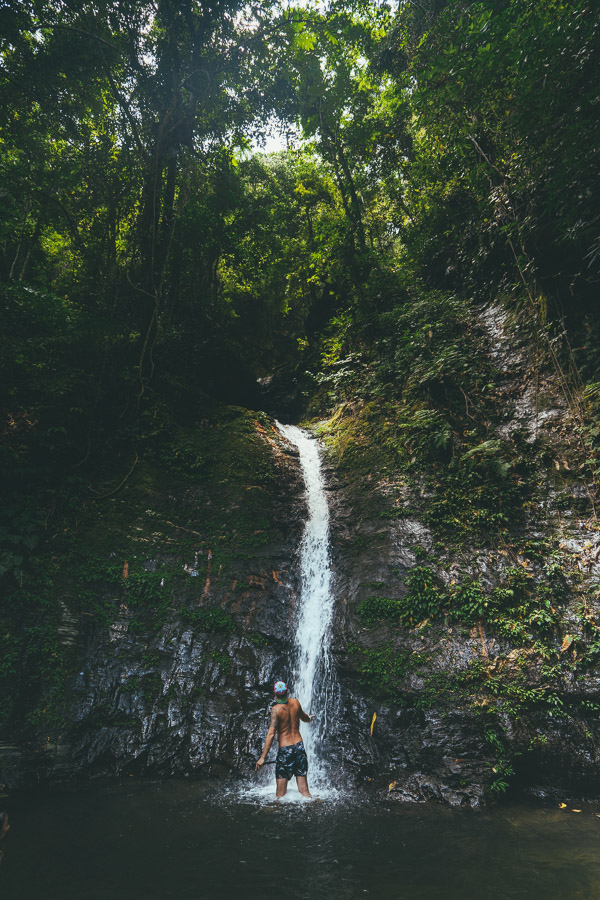 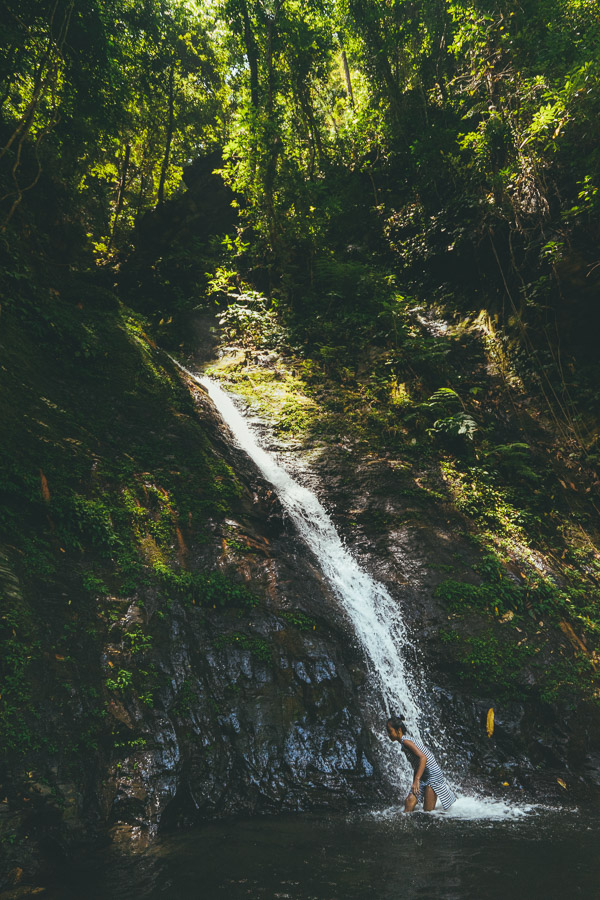 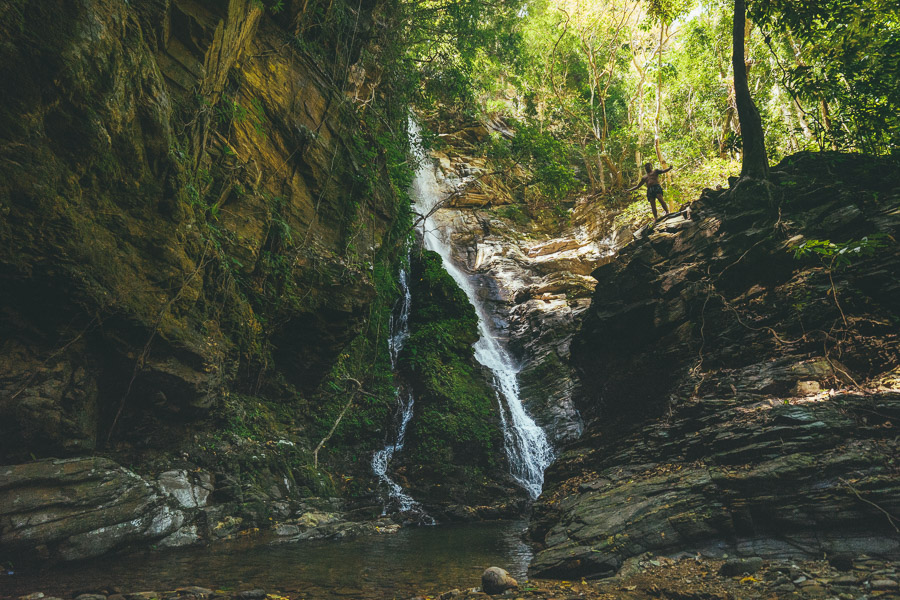 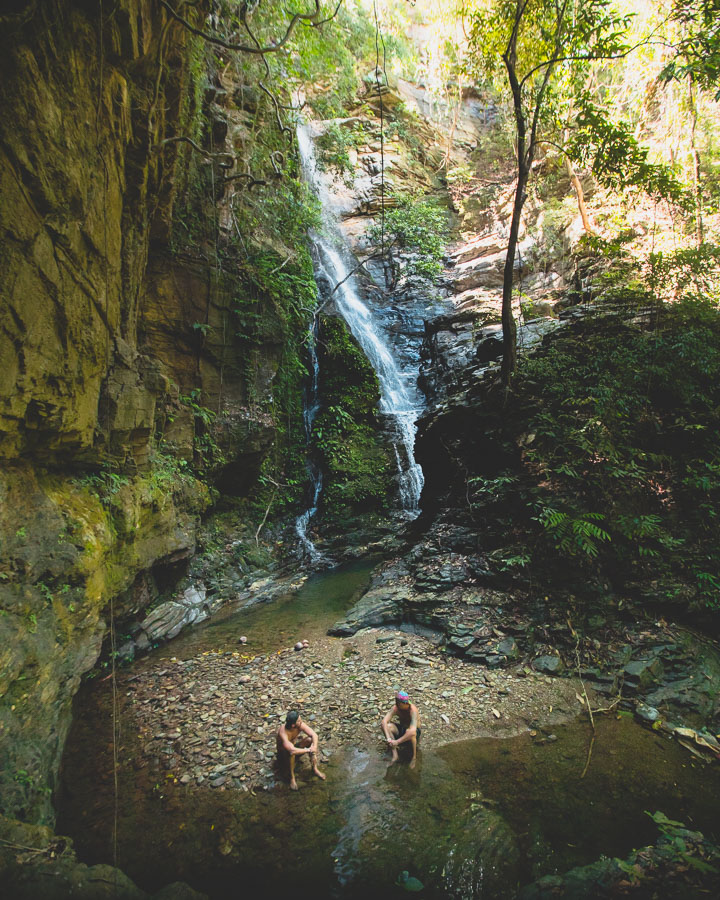 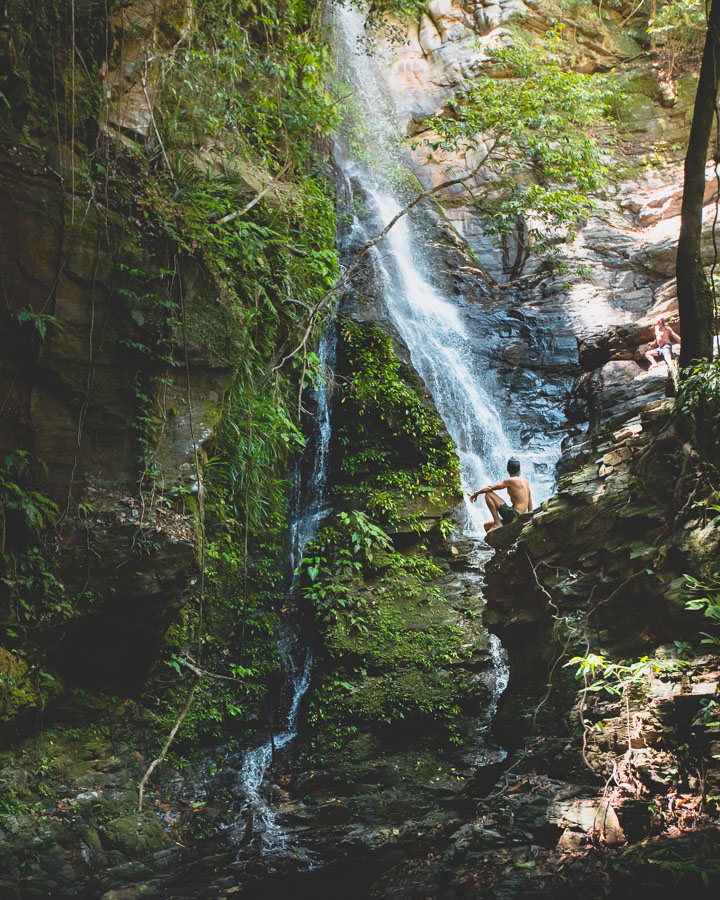 The next waterfall we were headed to wasn’t as straight-forward to find. Dulom Falls isn’t on Google Maps, a lot of locals had no idea what we were looking for when we told them and even when we did find the location we struggled to find the actual waterfall! However, it was definitely worth the effort. Additionally there was no entrance fee at the time when we went.

Once you leave Busay Falls you will need to jump back on your bike and backtrack til you reach a fork in the road. It is here that you will take the right-hand turn instead of the left as you did when you headed to Busay. It’s pretty hard to explain without the use of a map so my advice is to drive back from Busay parking lot for five minutes and then ask locals where is Dulom Falls. They will happily point you in the right direction and it wasn’t too far off the beaten track.

When we arrived at Dulom Falls, we still had to walk along a path through the fields and past peoples houses. You will cross a river and then shortly after must take a small dirt track down to the right. I continued on the path for 15 minutes past the dirt track and couldn’t find a waterfall so I turned back. From the parking lot, it shouldn’t take you more than 10 minutes to reach the falls.

Once you finally get to Dulom Falls you will see why it is nicknamed the dark falls. Very little light seeps through into this amphitheater. A few streaks of sunlight shot through making for some pretty epic lighting conditions down at the falls. A bunch of local kids were jumping and playing around in the falls. The pool wasn’t very deep and unless you are local, under 10 years old and half ninja, I would advise not to do any jumping or such at Dulom Falls. It was only about 5-6 feet deep at the very deepest point.

We really like this waterfall on Tablas Island. I think having to work to find the location added a bit of mystery to this waterfall and we were stoked to finally find it and go for a swim! It’s a great spot to get creative with some low-light photography also! 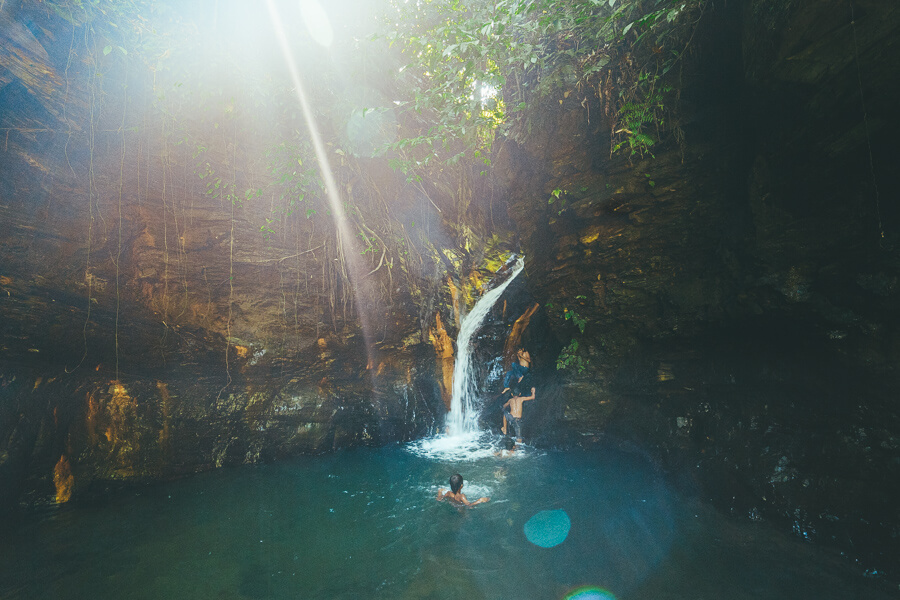 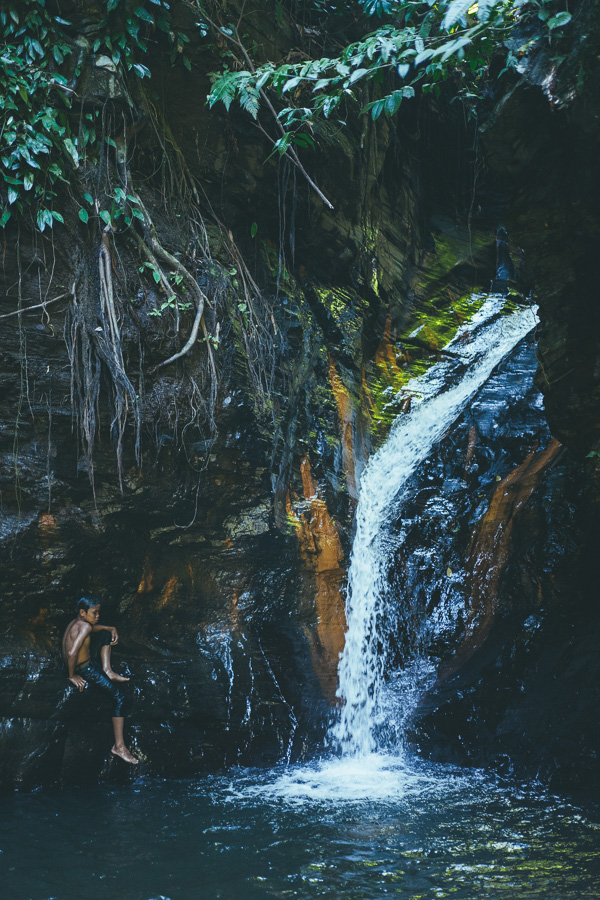 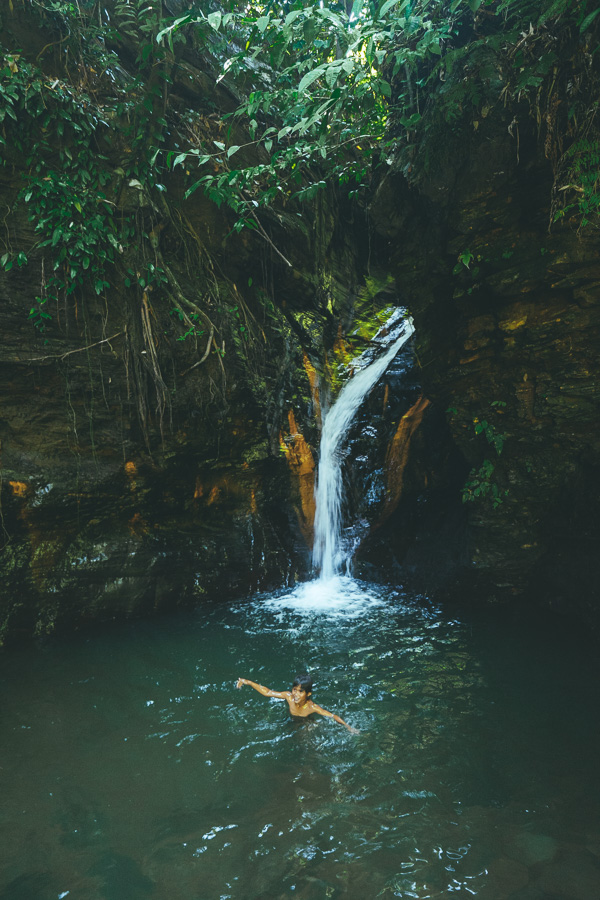 By this stage of the day, we were pretty tired. However, we still wanted to visit Trangkalan Falls and it was our last day on Tablas Island! Trangkalan Falls is another waterfall on Tablas Island, which isn’t on Google Maps or sign-posted from the road. That’s not an issue as all you need to know is that it is in the Barangay (town) of Bachawan, which is on Google Maps. You will need to drive further south along the east coast until you reach the town of Bachawan. In the main street, it is the last right turn down a little road. If you can’t find the road just ask the locals for Trangkalan and they will point you in the right direction.

We followed the small road through the village. The locals looked at us as if we were the first foreigners to head down their road in quite some time! Through backyards, we dodged chickens and dogs, while waving to those sitting on their porches. The path narrowed but we were able to drive all the way into Trangkalan.

When we arrived, there was no-one at Trangkalan Falls. There was some sort of tour office but it appeared out of action. A small emerald pool was the first waterfall that caught our eye. It was a small flow like Mablaran. We wondered if there was more and began scaling the rocks upstream to explore. What we found was amazing. Boulders, vines and exotic plants lined the stream, which seemed to continue tier after tier. We finally stopped after what seemed like endless climbing but who knows if we made it far enough.

We did however, make it far enough to enjoy an epic spot, which was an amazing way to end the day standing at the top of Trangkalan Falls having visited some of the best waterfalls on Tablas Island!

I have included a map below, which shows where Barangay Bachawan is on Tablas Island: 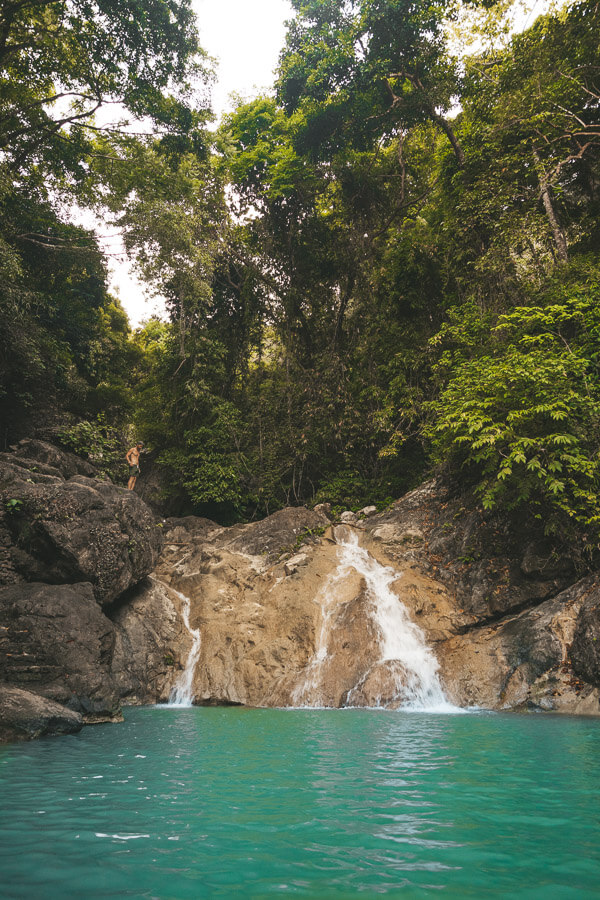 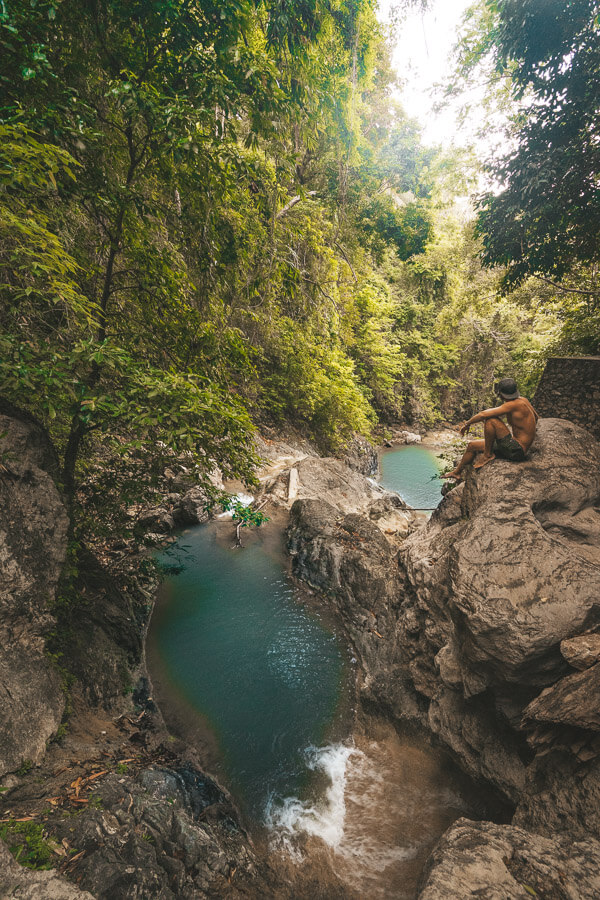 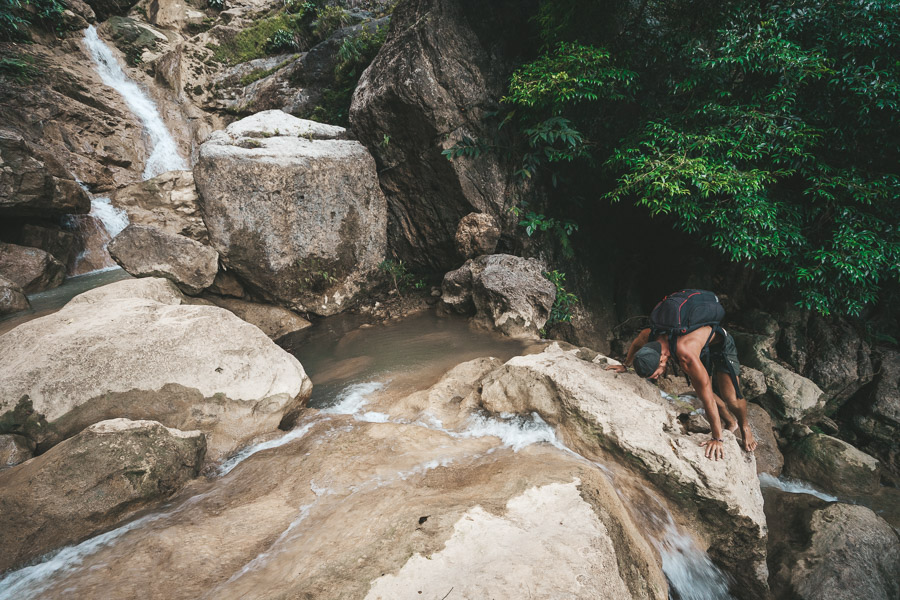 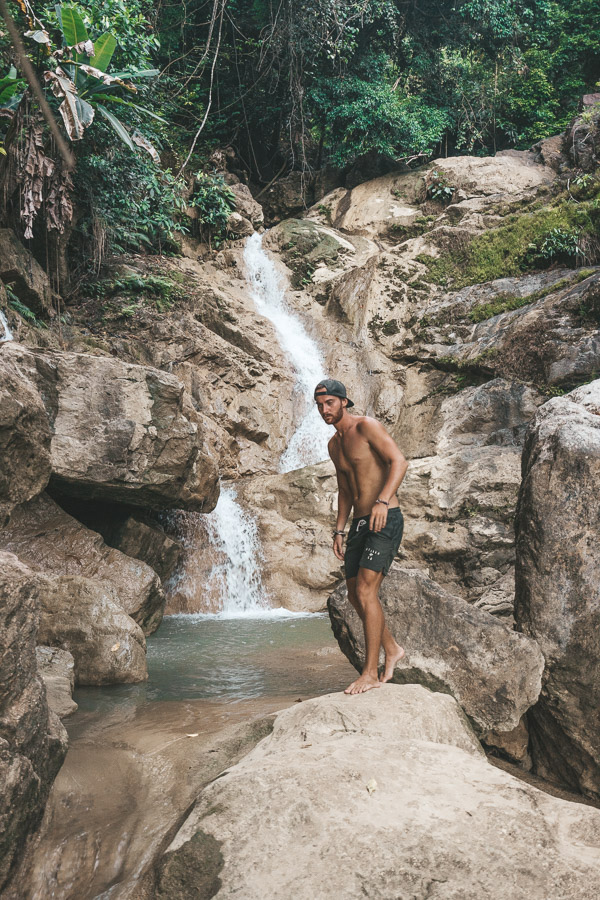 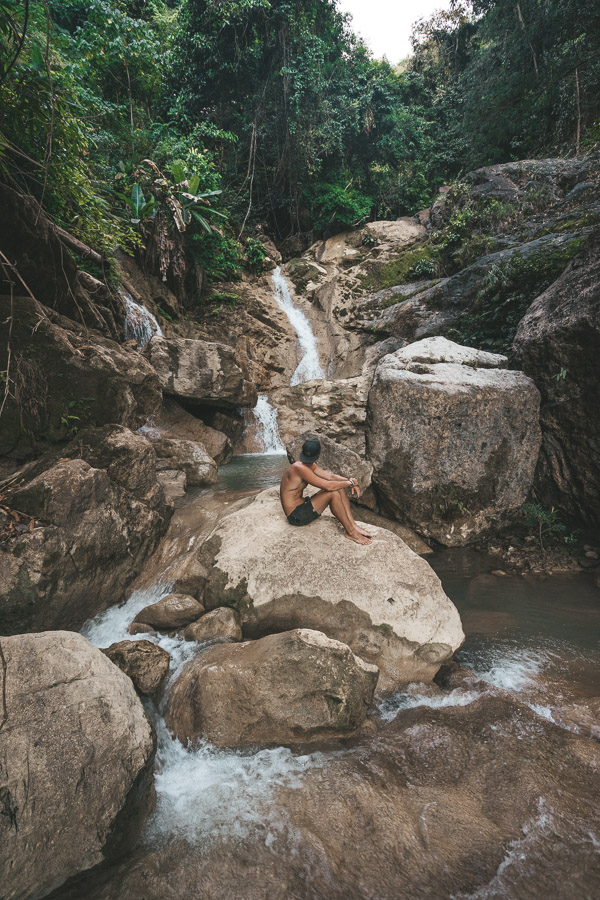 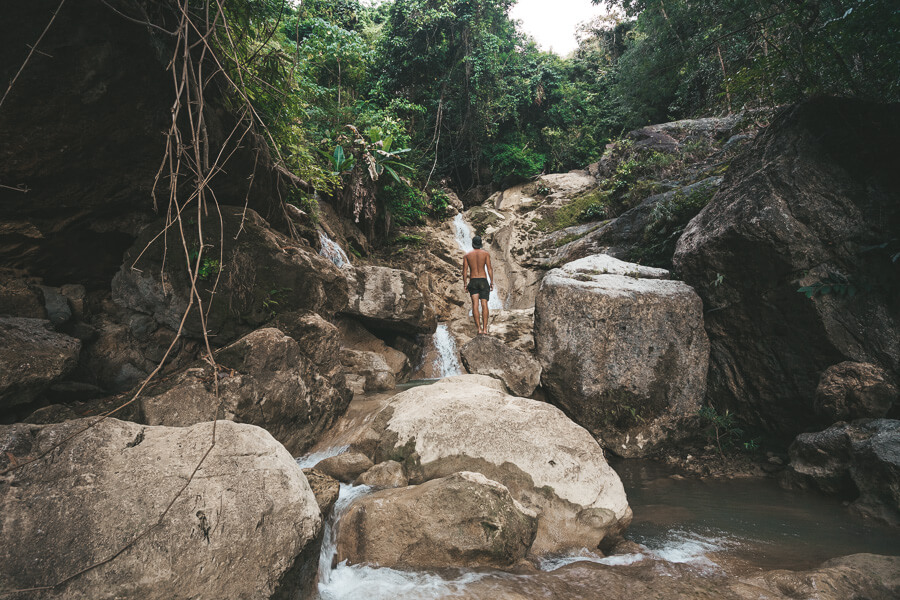 Mablaran Falls Offer Fun and Adventure | Travel to the Philippines

[…] Mablaran Falls was the least impressive of the four we visited all day but I think we had the most fun here hanging out with the kids on the rope swing and joining in the family fun atmosphere.  Read More: https://www.journeyera.com/tablas-island-waterfalls-romblon/ […]