The Quetzal is the national bird of Guatemala as it plays an important role in numerous types of Meso-American mythology. Additionally, the Quetzal is a very striking bird with impressive green feathers on its back while on its front it is covered in striking red feathers. The Quetzal also has a long tail. All of these features make it an attractive bird for bird-watchers to travel all the way to the Chiriqui region of Panama.

The Quetzal likes to spend most of its time in the higher altitudes and in the top of the tree canopy. It has a very distinctive call, which will help you identify when you are nearby a Quetzal. I have been one of the unlucky ones not to spot a Quetzal after being in Boquete for more than two weeks. I have placed this video below to help you learn the call of the Quetzal in preparation for your hike on Los Senderos Quetzales.

HOW TO HIKE SENDEROS LOS QUETZALES

There are many different ways to experience Senderos Los Quetzales. The trail runs from The Bajo Mono region of Boquete to Cerro Punta. There is a viewpoint called Mirador La Roca in the middle of the trail. The trail is 9.6km from Boquete to Cerro Punta. Boquete is 1951m above sea-level and the maximum height of the trail is 2500m above sea level so you will be reaching some lofty heights. There are generally three options most people choose when hiking the trail and it really depends on what you are looking for from your experience. I will list the options below and then go into detail about my experience on the trail and what to expect.

*It is important to note that I was told there was a $5 entrance fee for the hike. However, when I turned up at the station and asked to pay the entrance fee they said not to worry and the trail was free. It seems unclear after my experience what the official rule is.

Those are your three options unless you get creative and create a fourth with a car-drop or take an expensive taxi back to your starting point!

After a mini-landslide and heavy storms caused some damage to the trail, I had to wait an entire week for the trail to re-open. When it did re-open the trail was incredibly swampy and while still beautiful I do suggest this trail after a day or two of dry weather if you have time to wait while exploring Boquete. However, as the hiking in winter goes, you must accept early your shoes will be muddy for your entire stay in Boquete.

I caught the Colectivo for $3 and together with a packed van full of locals we made our way up into Bajo Mono. We dropped everyone off at their homes and worksites and I was the last one to jump out of the van at the National Park Station. Here you must sign your name, country, and hostel so that they can account for you if you go missing. I’m not sure how this works because I checked out at a different station in Cerro Punta so I hope they aren’t out on the trail looking for me! 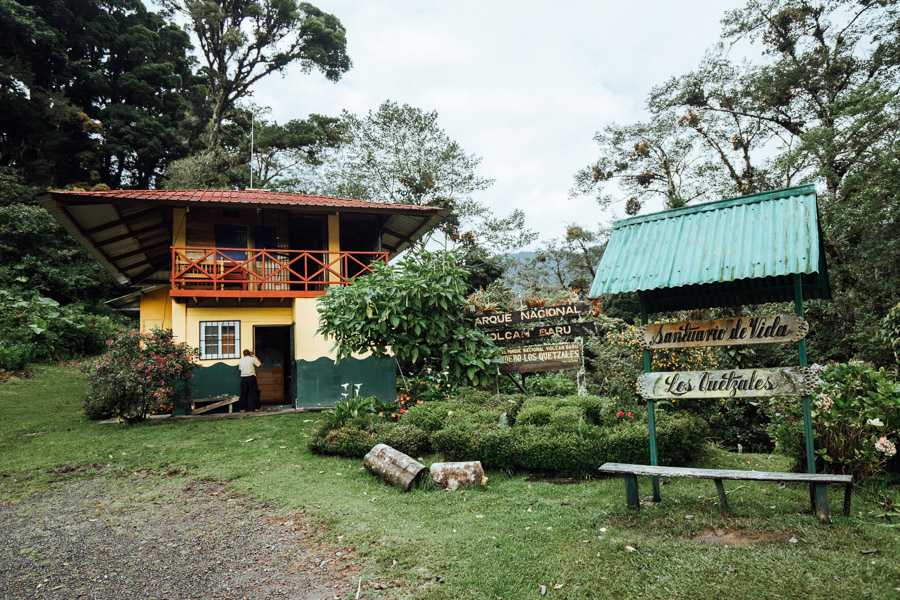 There were a few other hikers on the trail according to the sign-in book but as like most trails in Boquete, I would be able to enjoy the serenity of nature without any crowds.

The Sendero Los Quetzales begins on a dirt road through a farm. Sheep watched me as I trekked solo along the road towards the official start of the trail. After passing the farmhouse, the trail heads downhill into the forest. The trail is pretty rocky and uneven, which wasn’t aided by the recent storm that seems to turn the path into a raging river by the looks of the debris strewn everywhere.

Within minutes, I was deep in the jungle with vines draping the trees, butterflies darting to and fro from wildflower to fern and water droplets falling to the ground from the ends of giant leaves. Welcome to the jungle you will be here for a few hours.

Several bridge crossings help you make your way along the trail in the early parts of the Senderos Los Quetzales. However, because of the heavy rains, I had to make several risky crossings in my shoes in places without bridges. Finally, the water was too high for one crossing and I had to take my shoes off and cross. The river was only knee-deep at the highest point where I crossed but the rock steps were just slightly too far submerged to use them as stepping stones. 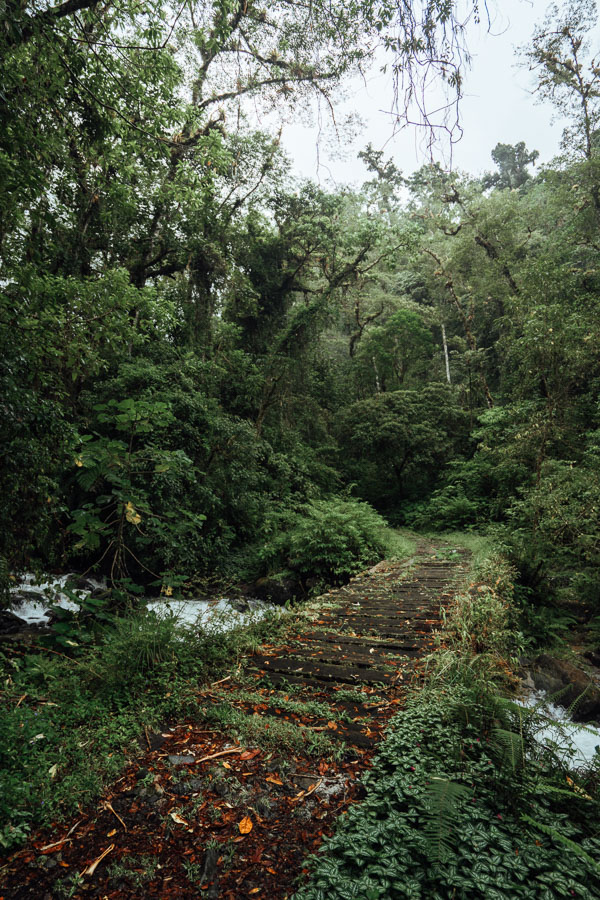 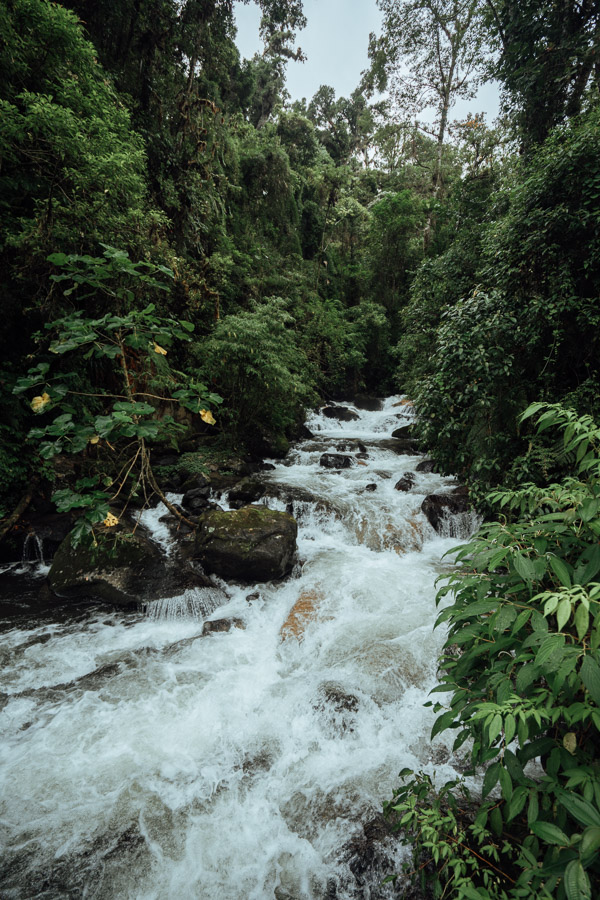 It was about at this point that the horse flies, as they are known, starting to annihilate me. Despite multiple coatings of mosquito spray, the bastards attacked the crap out of me. Luckily I am blessed with blood or skin that doesn’t react but it was about as bad as the Aussie outback with often more than 10 flies buzzing around you. This was only really evident near water, which because of the rain was through many parts of the trail.

From about an hour in, I had to accept that I was going to be trudging through the mud as it just became too prevalent, with not enough stepping stones or logs to avoid the dreaded mid-hike wet shoe. About two-thirds of the way to Mirador La Roca, the halfway viewpoint, was my favorite part of the trail. The trees started to look enchanted with huge roots, crazy vines, and thick canopies. This spot, in particular, was one of my favorites on the trail. Nothing like a little 10-second camera timer action mid-hike to break up the trail. 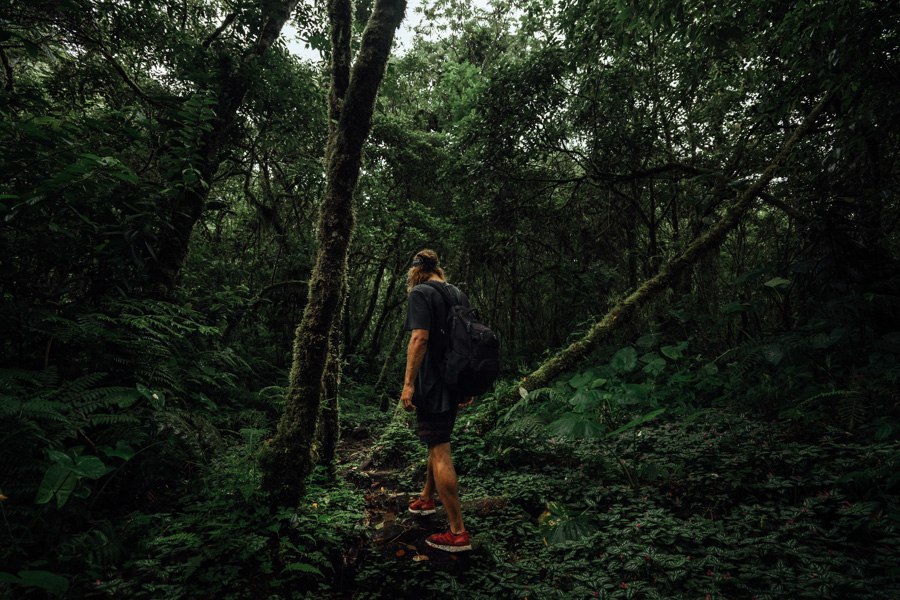 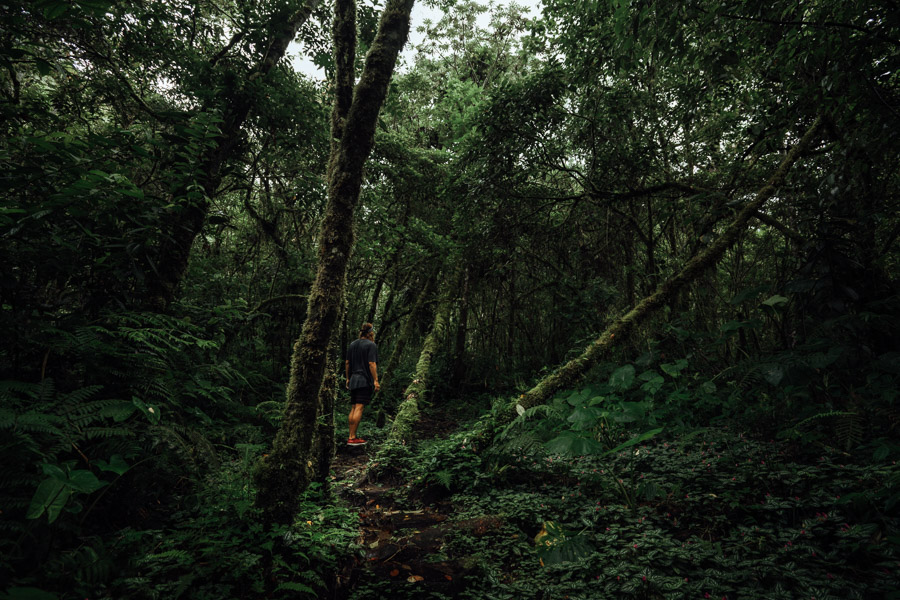 I soon came to a cool little suspension bridge, which shook as I carefully edged across. It also marked the start of the ascent as I began to regret my stubborn approach to heading up the 800m incline rather than coming down from Cerro Punta. 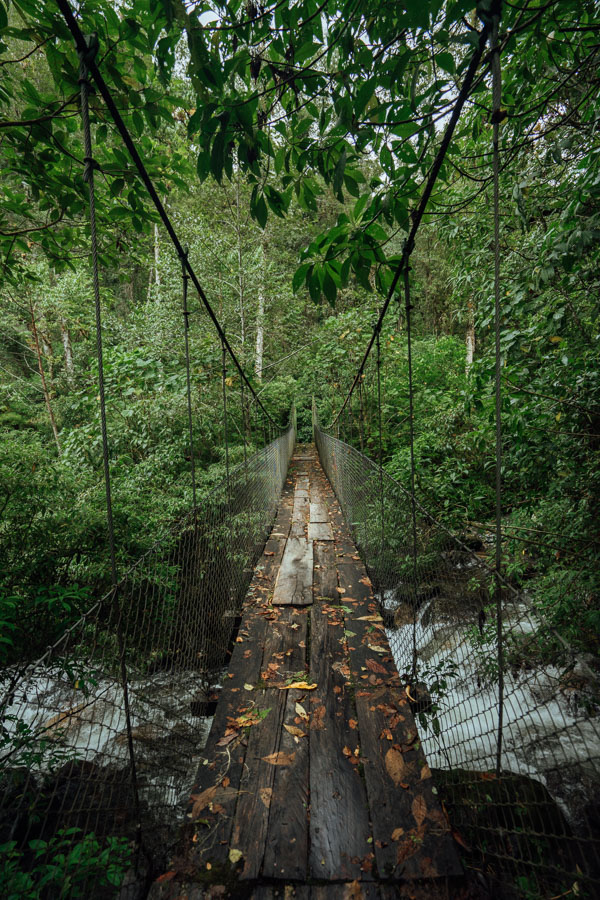 By this time I was in the full-blown bird watcher mode. Knowing nothing about bird watching, I stopped in my tracks every time I heard any single bird whistle. Listening out for that Quetzal call, they all began to sound the same. I felt pretty dumb sometimes as I tried to spot the point where the whistle was coming from. I couldn’t have been any more unsuccessful. The elusive guys really do blend in. I even tried my luck at communicating with the Quetzal but obviously, like my Spanish, I need to work on my pronunciation.

The incline had become quite steep and, in fact, it turned into large muddy stairs very quickly. However, at this point, you know the big break is nearing as you are right around the corner from Mirador La Roca. The viewpoint is sign-posted but does require you to walk for five minutes off the trail. The sign says 80-meters to Mirador La Roca but it had to be 200m. Either way, it is definitely a great spot for a break even if it is a cloudy day as it was for me. 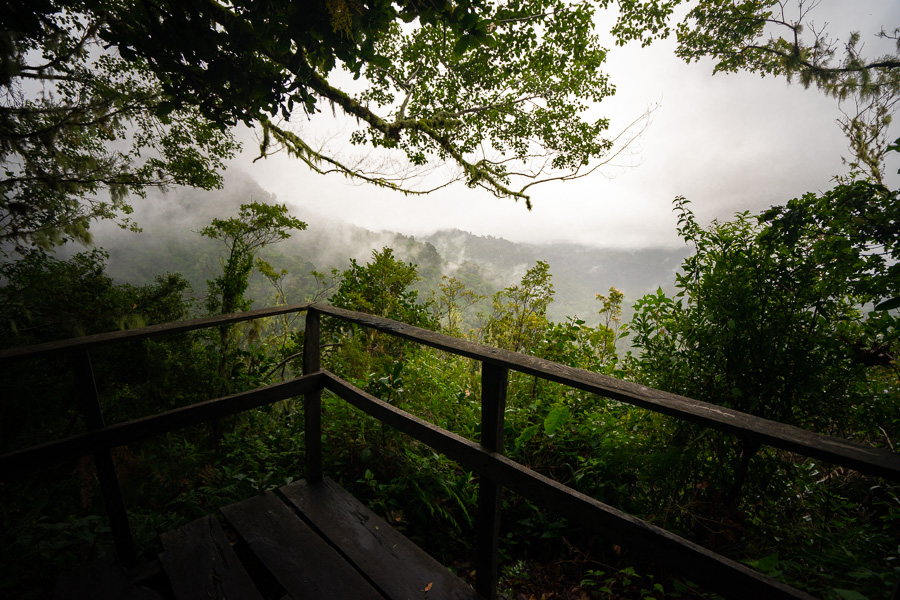 It is here you must make your decision of whether to continue on or head back the way you came. The horse flies had died down now that I was at a higher altitude. That sealed the deal for me as I didn’t want to venture back into the territory of the horse fly. I decided to continue on to Cerro Punta.

The trail continued to be muddy and wet as I persisted in my search for the elusive Quetzal bird. It wasn’t my day although I did manage to spot a few other birds. There were some sounds of the howler monkeys but no sightings either. I did, however, come across some interesting wildflowers and plants throughout the Senderos Los Quetzales. 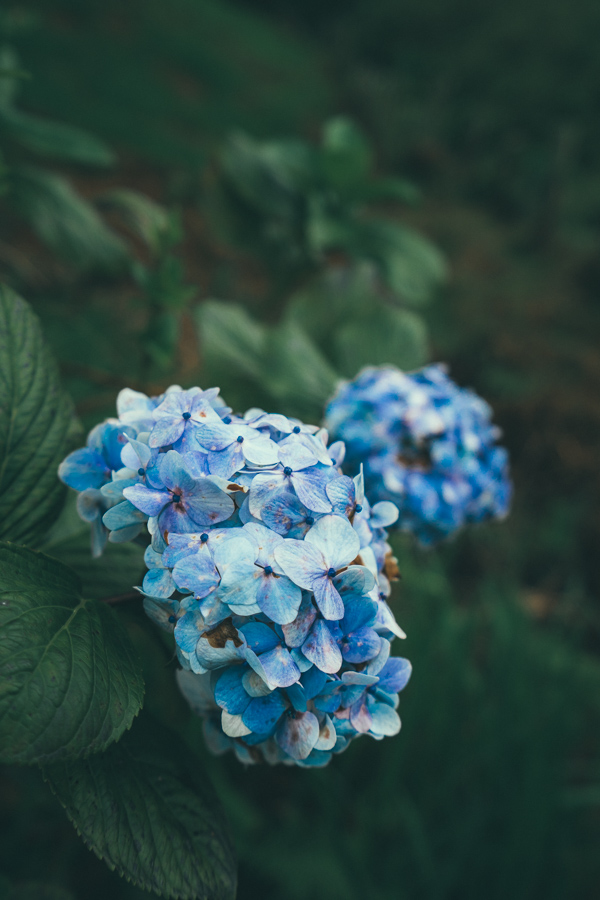 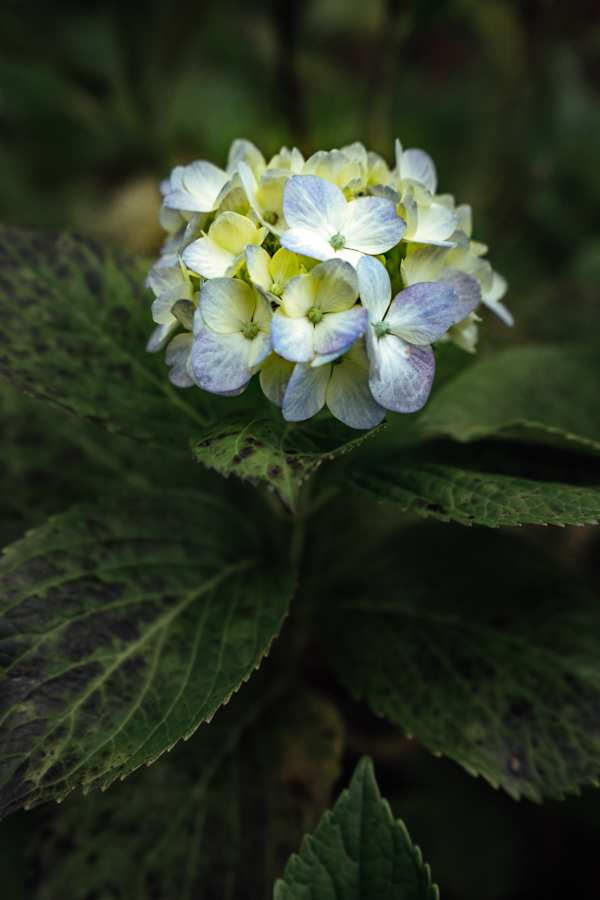 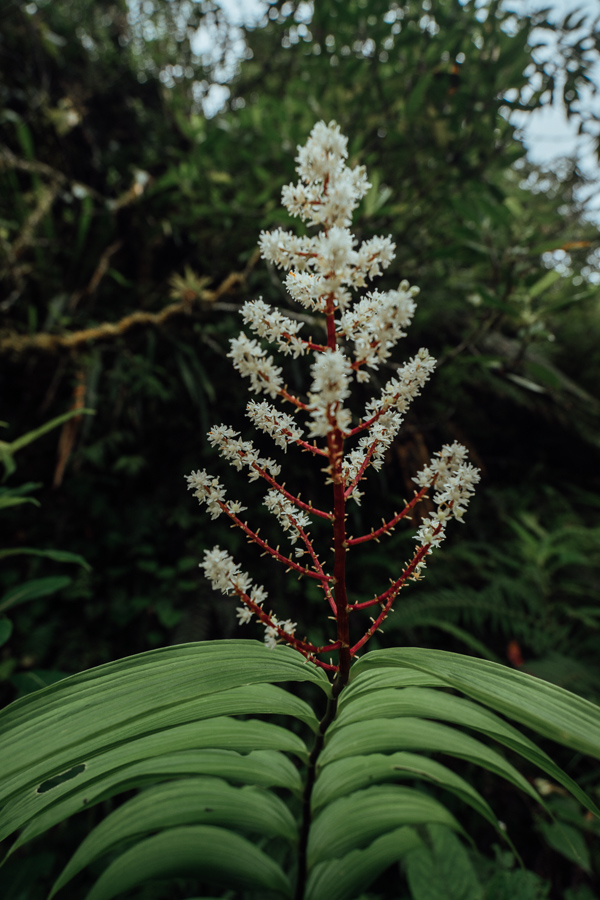 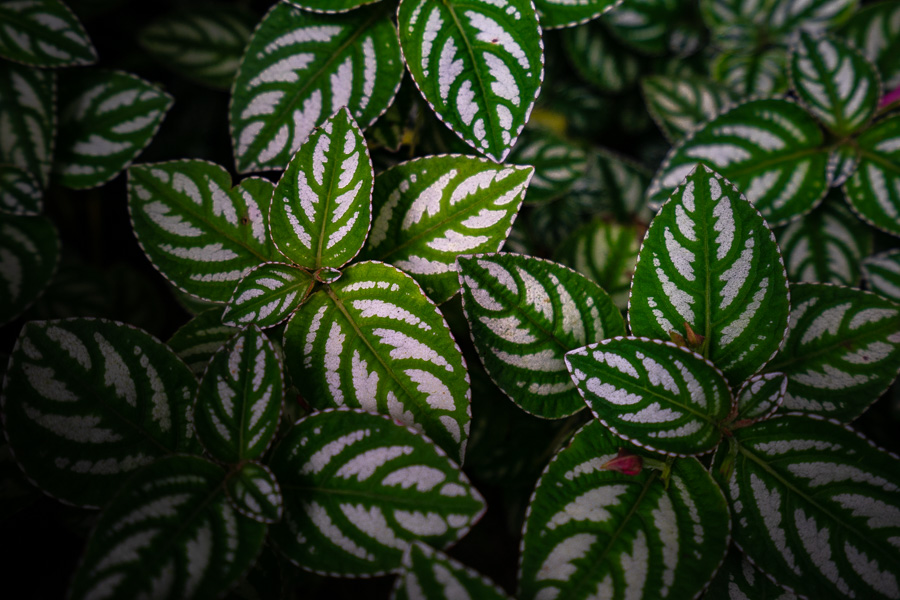 From Mirador La Roca, I held a pretty good pace and I think it took me about an hour and a half to reach the Cerro Punta station. Here you can see the epic entrance to Senderos Los Quetzales if you were to begin from the Cerro Punta side. 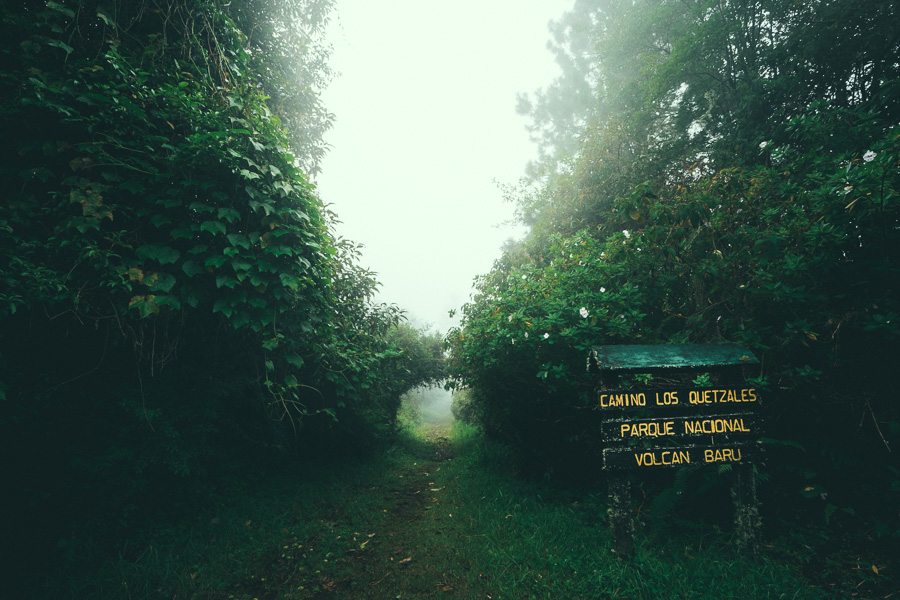 At the station, I met some local hikers who were also headed back down towards Cerro Punta. I exercised my growingSpanishh vocabulary while chatting to them about all things hiking and Chiriqui. It’s funny because they actually introduced themselves after recognizing me from my photo at the top of La Piedra de la India Vieja. It is often the way that I take on the trails most locals don’t attempt or don’t know about. In this case, they had tried but didn’t find a way to the top. We laughed because nor did I but I hacked my way through due to me stubbornness and motivation to reach the top.

It took us quite a while to get back to the road where the bus just seemed to pull up next to us. It wasn’t an official bus stop you can just wait and flag it down I guess. I then took an hour to reach David before another hour or so back to Boquete. All up, I left my hostel in Boquete at 10 am and returned at 6pm. It was a long day and I did enjoy the trail. However, without seeing a Quetzal, the trail itself isn’t as impressive as many others in the area in my opinion. It is beautiful but I enjoyed El Pianista and Lost Waterfalls Trail due to the trails and experiences themselves. The Pipeline Trail is actually shorter, easier and known as being a Quetzal hotspot if you are keen on spotting the Quetzal but not the full day Sendero Los Quetzales experience.

Hi! I dont know if you still respond to comments, but, I was curious--I've read (and you seem to hint) that the trail is easier/more fun if you do it from Cerro Punta to Boquete. What i am imagining would be to drive to Boquete in the early morning; then we take two busses (from Boquete to David, then David to Cerro Punta? to the trail entrance in Cerro Punta?) Or does it make most sense to simply drive to David, take the bus to Cerro Punta, hike to Boquette....then bus back to David? Or maybe the "second" option--simply hike half the trail from Boquete, and skip all these busses...

We'd be there for a day in early December, and your recommendation about skipping it if it rained recently is well-taken.

so coooool!!! im from panama city and id never been there before. now im so excited to go! thank u so much

Hey Jackson, Thanks for the article and for your whole Blog! It is something like a fible to me while I‘m staying in boquete ?. Would it be a fourth opportunity to walk the trail to the end and just head back exactly the same way but reverse? I know it seems kind a boring but I realized walking treks backwards, gives you sometimes a complete different view on the trail. Do you think, there is any problem by doing so? Best Regards Andy

Great article Jackson....felt like I was there with you....although also, would not have enjoyed those flies.