La Piedra de la India Vieja hike has in my opinion, the best views of any hike in Boquete. However, it also has the worst trail or from what I found… no trail. My legs had many a battle scar after this hike but boy was the rock viewpoint at the top worth it all and more. If you are up for an extremely tough jungle adventure, go for it. Otherwise, enjoy my photos and head to one of the other beautiful hikes in Boquete. That’s genuine advice, not a challenge.

The trailhead was hard to find for this one. Just like its neighbor, La Artilleria Hike, the hike is not heavily frequented. In fact, the taxi driver looked up at the rock at the top of the mountain and with a look of *why on earth would you* said, ‘You go there?’

I grabbed a taxi in Boquete town and organized with the driver for six dollars to take me to the trailhead. He wasn’t quite sure but I had marked it on my Google Maps so off we went. The hard part is that the turnoff to the hike is still a 3-mile (5km ) road and it is very rocky and bumpy. This is why I strategically chose a pickup truck taxi in town, hoping he would take me all the way to the trailhead. I think he wasn’t expecting such a difficult drive and I felt bad that I had haggled down to six dollars. The driver was super nice and wanted to take me all the way. He took me about 85% and then it got a bit rough so I got out and walked the last bit.

I have put a map at the bottom of the blog post with the exact location of the trailhead. However, as I will explain it is not a guarantee you will find a trail from there.

The next part is important. Make sure you organize with the driver to come and pick you up. If you don’t you will have 3-mile walk back to the main road and then a 3-5 mile walk back to your accommodation. It might be hard to guess and I literally just plucked a number giving myself more time as I preferred that I was waiting not the driver. I gave myself six hours to get up, hang out at the top and to get down. It ended up being perfect. If you make it up quickly somehow just hang out longer at the top and take some snacks.

I prepaid the driver with $20 for the trip there and back and just trusted he would come back to pick me up. It would be pretty rough to leave a solo hiker out in the dark to make a free $10 and he was a nice bloke so I figured I would be solid. He indeed was there 10 minutes earlier to pick me up.

From this trailhead marker, you will need to walk down the road and turn right down the road pictured here. From this point, all I can say is good luck and may your journey be a blessed one because you are going to need all the luck you can get. I don’t know where the trail is. After going up and down two different ways, I can say they both were horrible and the majority of people would have stopped after twenty minutes into the hike but I am stubborn as they come. I will discuss your options more in the blog post. 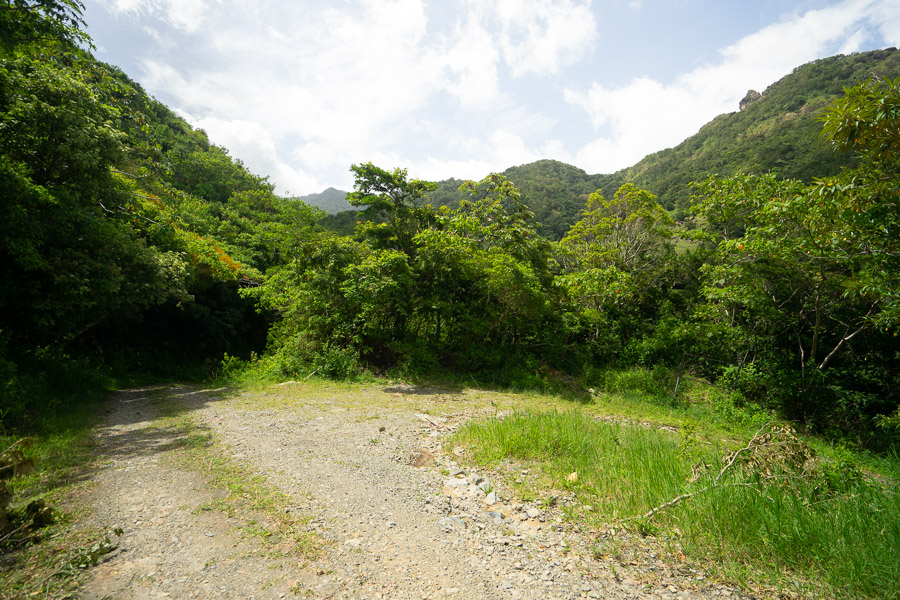 The hike began well. My taxi driver dropped me all the way in, which I was not expecting. Off I went on my solo mission to La Piedra (The Rock) viewpoint at the top of the mountain. At least I knew I was in the right place when I had this view early on of exactly where I was heading! Here you can see the rock formation at the top of the mountain. I would be heading around the right hand ridge and making my way to the top. 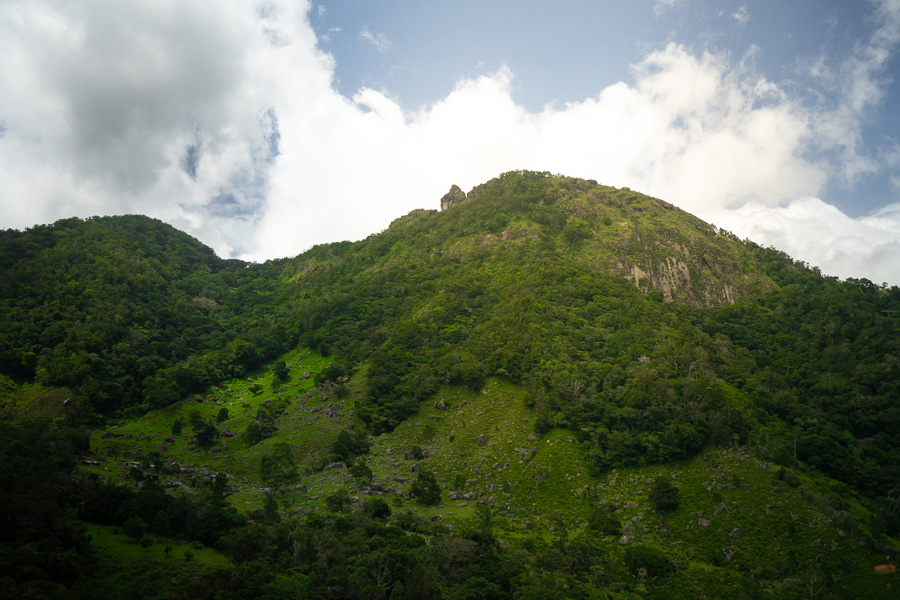 The trail started off as a long driveway and eventually I ended up at a house. A nice old man and three angry dogs came out. We had a very spanglish conversation and he was satisfied to send me off past the house in the same direction I had been heading. He knew I was heading to the summit so I can only assume the trailhead is past his house. However, throughout the hike I had my doubts and cursed the old man while I was neck deep in vines.

I had seen on an app called WikiLoc, another hiker take a different route to me. However, I tried to copy their route on the way down and had no luck either so I really am not sure where to begin the hike. Wherever you begin the hike, you will likely have to jump a barb wired fence. I did going up and coming down.

I could see the rock at all times so I figured I would just head up the hill and see how I went. I went poorly.

I began walking through a field of cows and mud. As I went to cross the stream a 4-meter long snake, which was black and yellow, violently jumped out of the water and shot off in the opposite direction. Into the jungle we went. I then had to jump another barb wire fence pictured below and seemed to be theme of the day as I would jump about 10 barb wire fences throughout the hike and even fall into a hidden one. 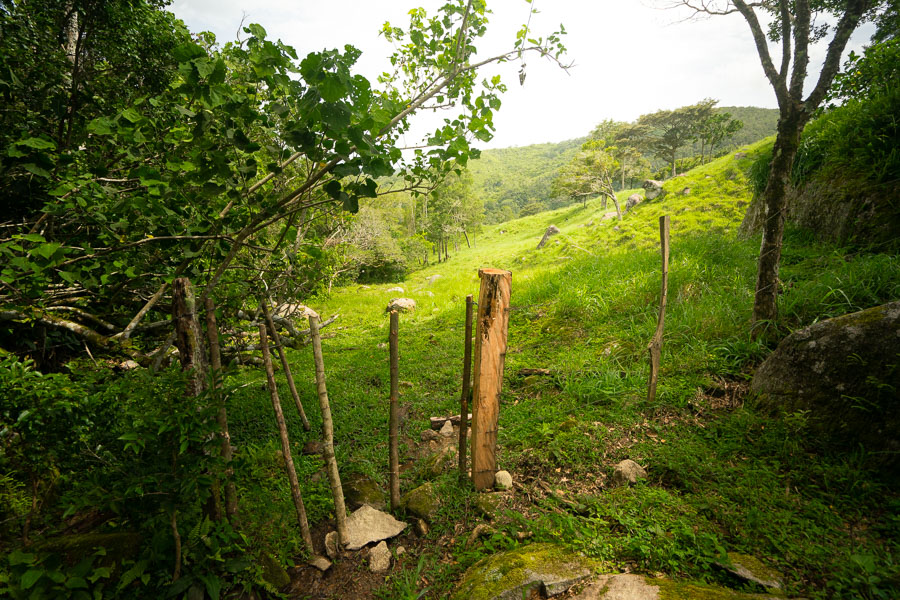 From this point on I didn’t take many photos until I reached the summit. However, I will happily recount the misery that was the next 1.5 hours of my life. Here is how the pattern would go. I find what looks like a trail and follow it for one or two minutes until it fades a little and I become engulfed by vines, swallowed by the jungle and caught in the spider web of the forest. With no machete or knife, I would break myself free and battle for the next 10-15 minutes to find myself a new trail to follow. Repeat this process again and again.

At times I thought I might be best to head back down but I also knew I could also just slowly bush-bash my way to the top through the vines despite it being the most terrible way to hike a mountain. Often there was no floor, only a bed of vines that would collapse as I stood on them. My legs, arms, and face are all incredibly cut up right now from the trees and vines.

A big tip is to download the Google Earth map for offline use before you start. This way I could keep comparing where I was headed to the rock and try and at least try and reach close to the summit. It also meant it would be hard for me to get completely lost.

I’m not complaining, I actually thrive on the challenge and am a never give up kind of adventurer. I just want you to know that unlike usual, where I give you directions and advice to have a great hike, I cannot provide you with solid information about this hike other than to go in an upwards direction and figure it out. Maybe you need a guide, maybe the trail is closed, maybe the trail is overgrown.

When I made it out of the forest and to the first huge rock I couldn’t have been more relieved. What an ordeal. I didn’t even look around for the path. I just used the grass as a ladder and scaled the almost vertical 20-meter high rock. The path was right behind the rock.

The next hour was amazing. As soon as I got up on the first rock and spun around, a double rainbow was there to notify me that everything was all good and my luck was changing. I hung out on this rock for a little bit before venturing further along, not knowing the main rock and epic viewpoint was another five minutes further. I was so stoked to be out of the jungle I just wanted to sit on the rock all afternoon. 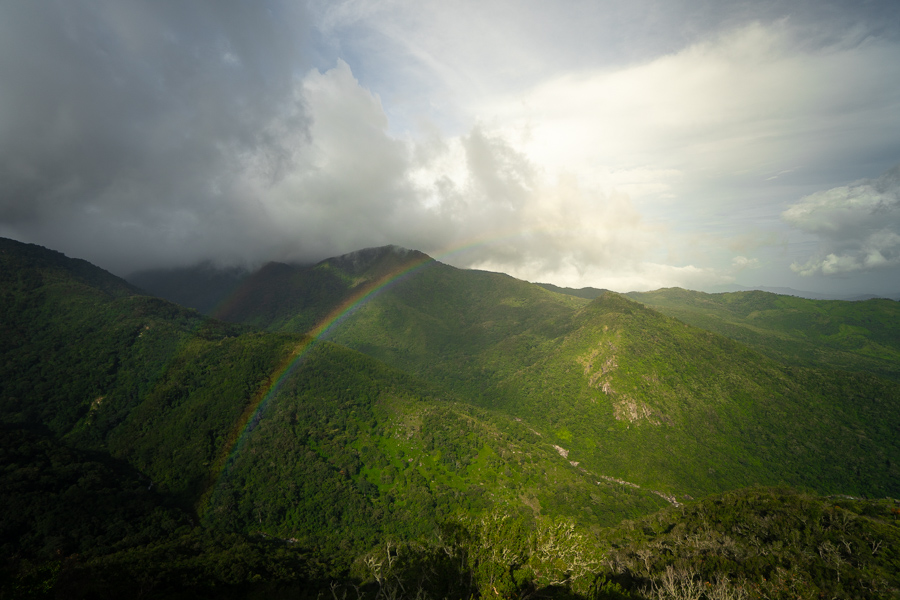 I chugged on to the final frontier and was blown away. It was totally unexpected. A jagged rock wall curved around right beneath me while mountains in all directions created an immensely atmospheric backdrop. Despite the rough journey up and the imminent rough journey down, I felt like I was on top of Boquete and I really was out here alone. I hadn’t seen a soul and I’m pretty sure no-one is hiking this trail for good reason! I hung out up top for just under an hour shooting the mountainscape from a multitude of angles. How is this effort with my ten-second timer to click the buttton and run up here to be in my own photo. Muy Rapido! 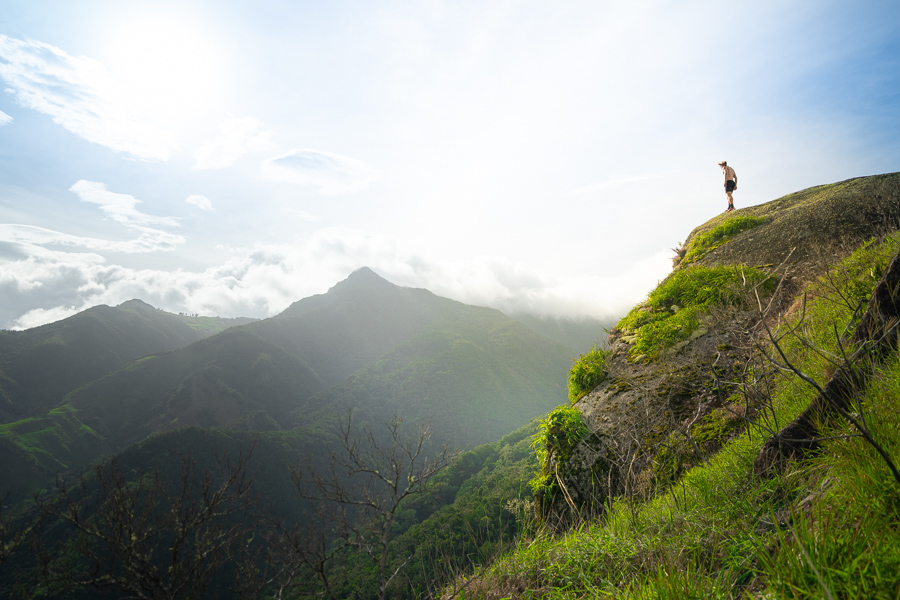 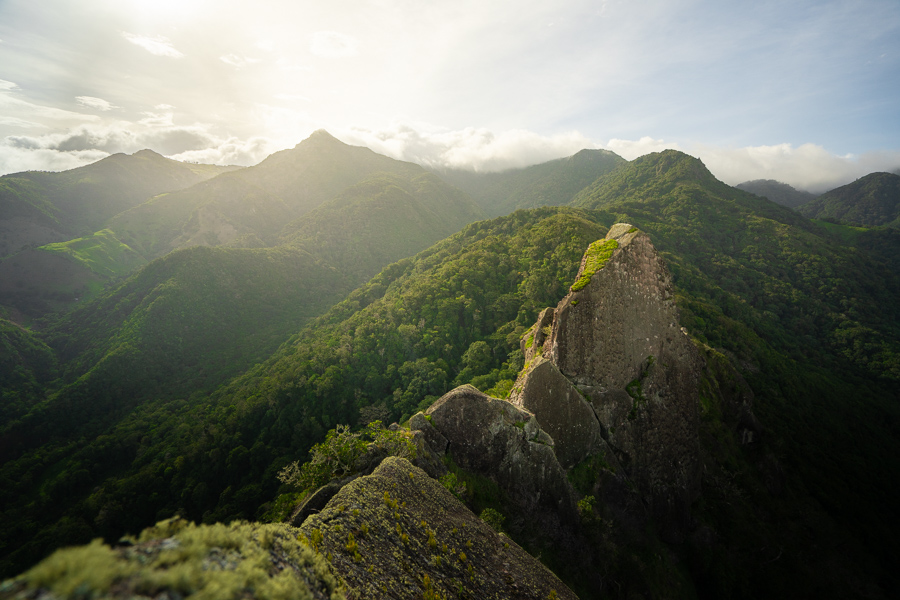 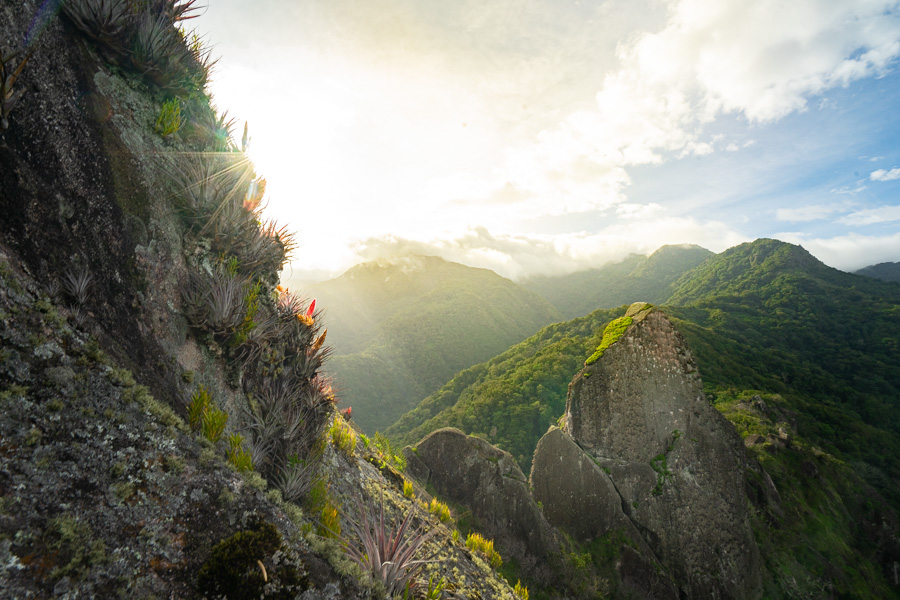 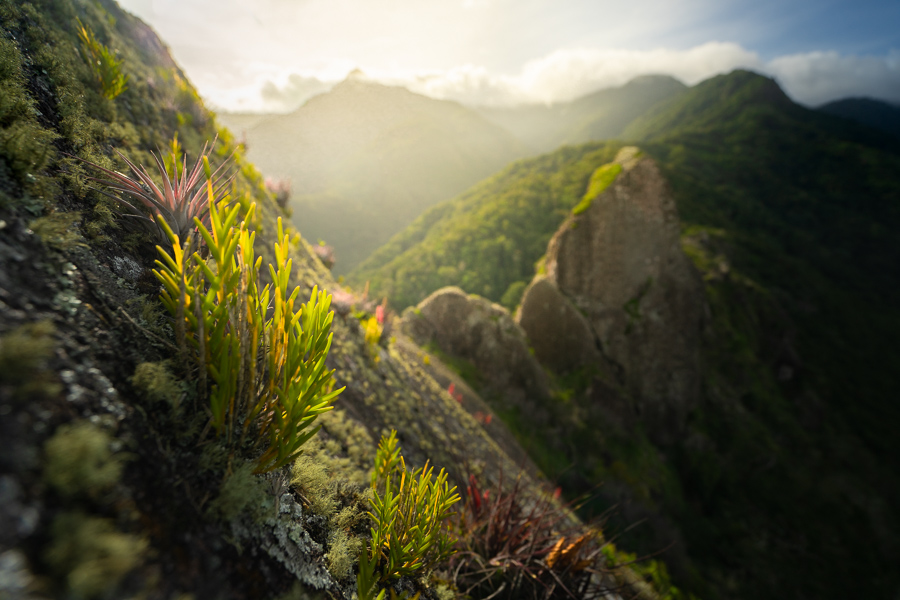 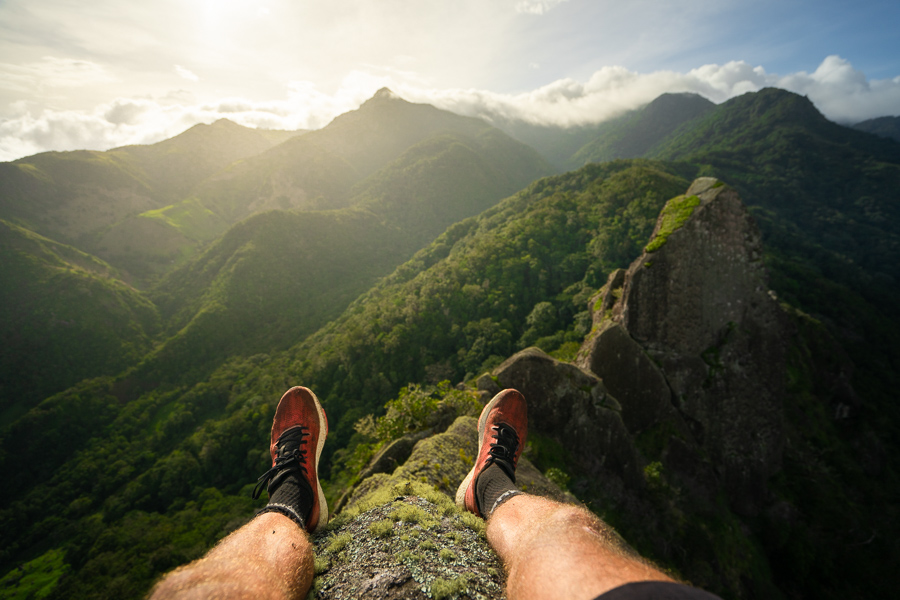 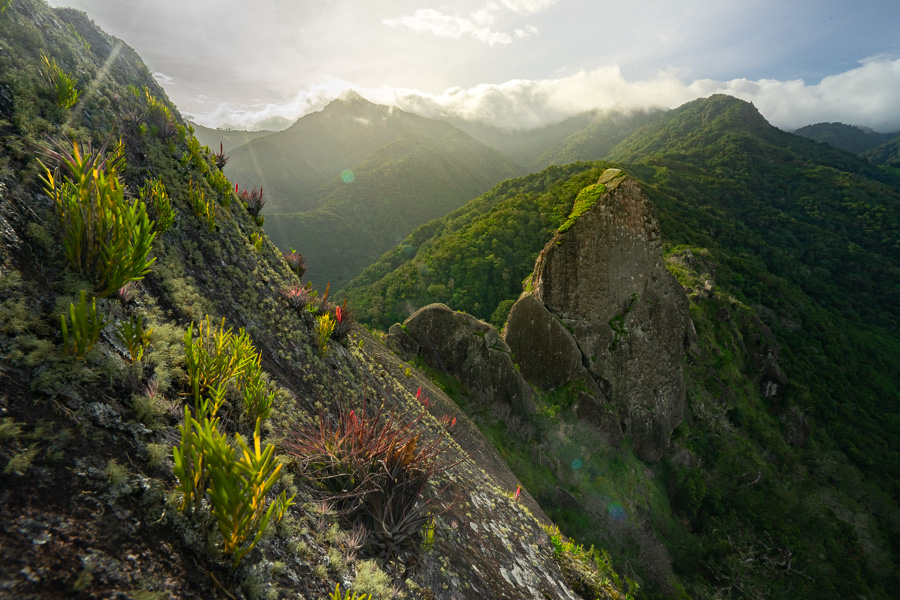 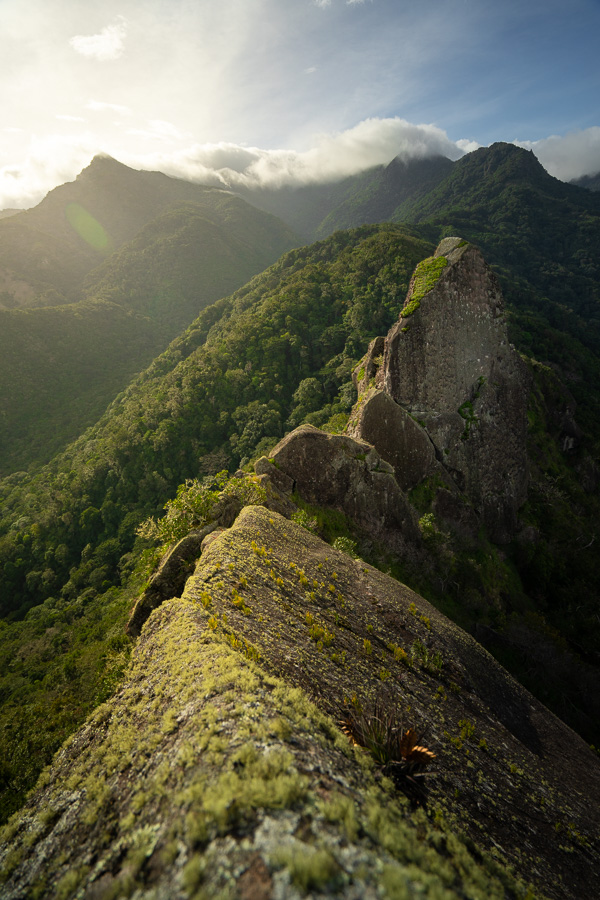 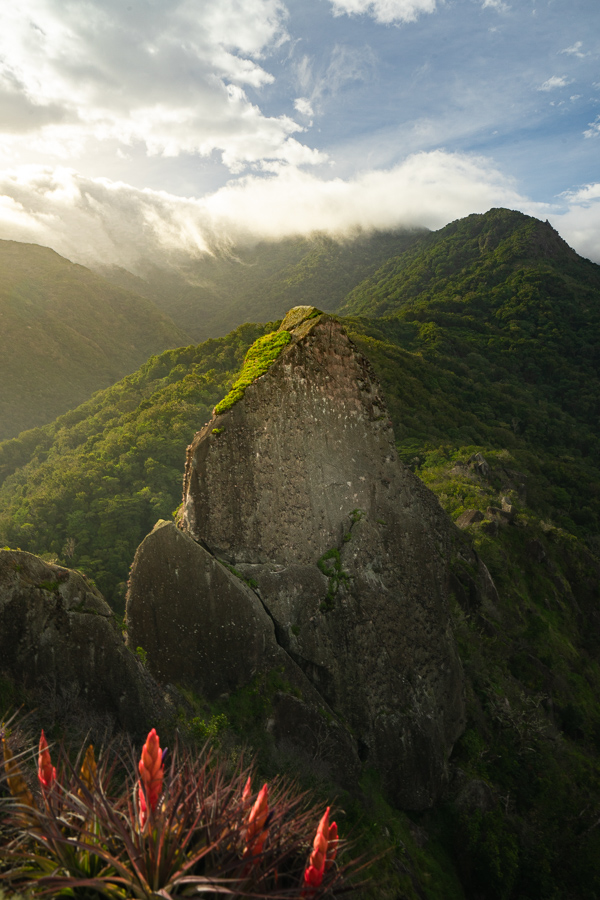 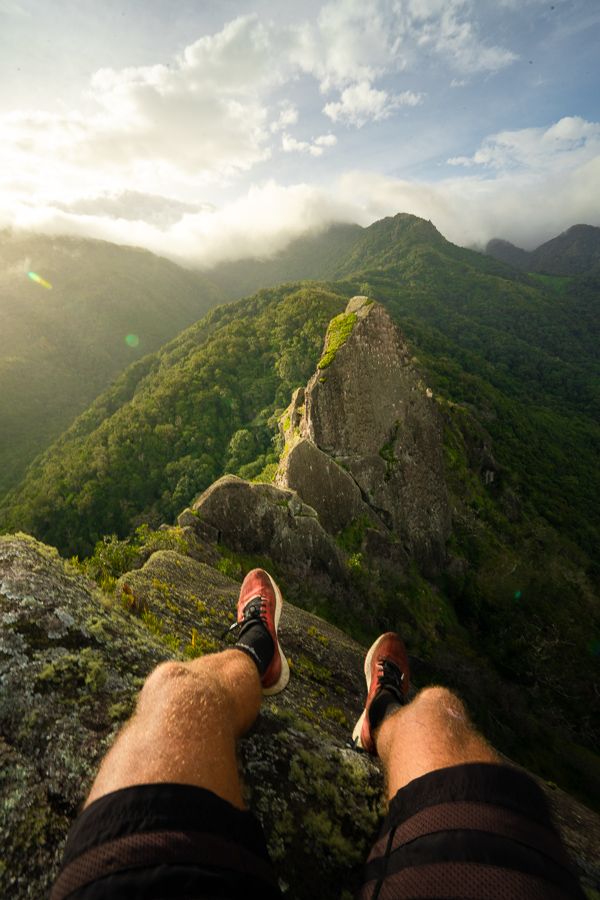 After enjoying my solo hang at the top of La Piedra de la India Vieja, it was, unfortunately, time to head back into the depths of the jungle. Would I be able to find a better route down and not get hammered by branches? No.

As hard as I tried I still found myself in trouble on the way down. I did get some good patches of the trail but had some big hits and falls too, notably landing on a hidden barb wire fence. Fun stuff.

My route down was slightly better and spat me out at a different spot on the road. I can’t definitively say where to start and where to finish so all I will say is pack water, snacks and a never say die attitude.

Hi! The map to show where you started isn't available, do you mind updating the link so I can use it as a guide? Thanks in advance!

So interesting your trip, I was born there. Around 1976 my parents lived in front of this piedra de la India, on the other side of the first picture that you shown us. I went 18 years ago to meet me with my birth of place. I have some picture of this Piedra de la India. It is a beautiful, historic, and mythical place to explore.