Romblon Island is famous and this was an awesome adventure. However, before we get too carried away this isn’t really a self-guided tour. This was me and my mates cruising around the island and driving into off the beaten path spots. We stumbled our way into a marble quarry, where the village welcomed us and showed us around. We then went and saw the marble being shaped, cut and formed into beautiful works of art. It was a great adventure and one we look back on but the title is a bit of an inside joke with the boys because in reality we got looking for an awesome drone spot and ended up stumbling into the quarry.

I do suggest you dedicate a morning or afternoon to checking out Romblon’s marble industry as it is very fascinating. Romblon is world famous for its marble, which comes in a range of shades from white to black and everything in between! We heard a few stories about how the Italians used to buy the marble from Romblon and then sell it as Italian marble. That is entirely un-fact-checked!

Okay so to start this little adventure you are going to need a moped. You can grab one for 50,000 pesos or $10 USD in the Poblacion/town of Romblon. Next, you want to drive up the hill towards Lio Bay. You might question it a few times but once you reach the top of the hill, the winding road that takes you down through villages all the way to, Lio Bay is a fun little adventure. We didn’t know Lio Bay was a marble quarry, we thought it was a cool spot to send the drone up, which it also was.

I have pinned the exact location of Lio Bay below:

So we drove down this windy road and ended up in this pretty run down the village in Lio Bay. We weren’t quite sure where we were and the locals of the village weren’t sure who the hell we were. I’m pretty sure no tourists come down there ever. We got off the bikes and a few kids came running over and we chatted to them and then an older guy came over. His name was Steve. He took us under his wing and became our tour guide for the next couple of hours.

He led us through the village and along the coast, pointing out the machinery and marble along the way. The kids were all up and about as they followed the three strange visitors through the quarry. It opened up into a huge quarry area right on the coast. Lots of people were working away but stopped to check out our party. 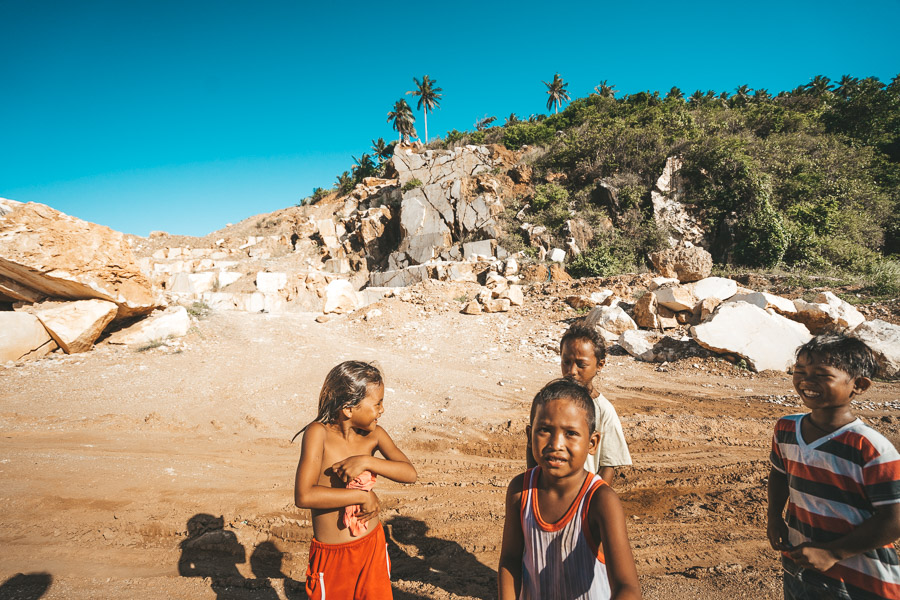 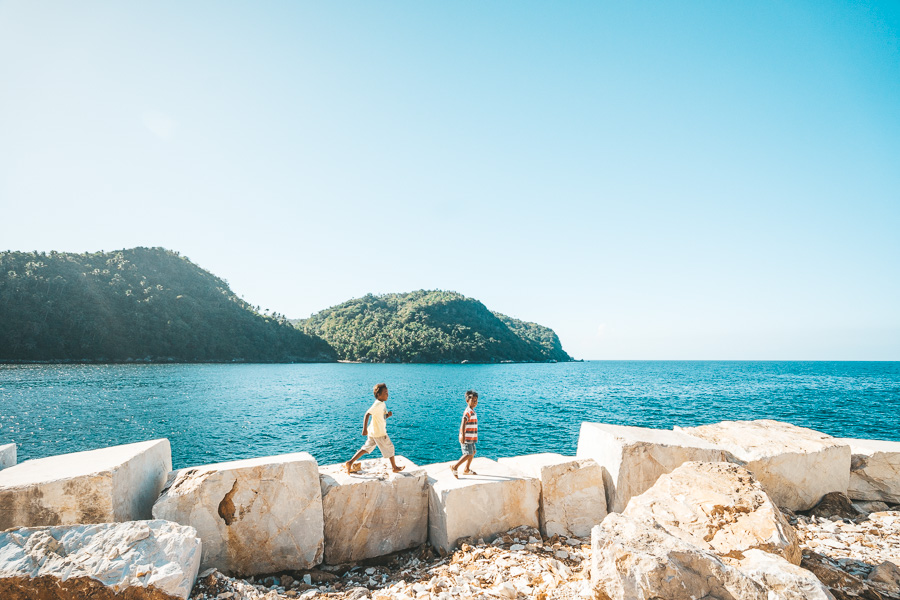 The real fun started when we brought out the drones. The kids were mildly terrified but equally curious about why the helicopters were chasing them and buzzing all about. There were some nice shots along the coast and of the quarry itself. 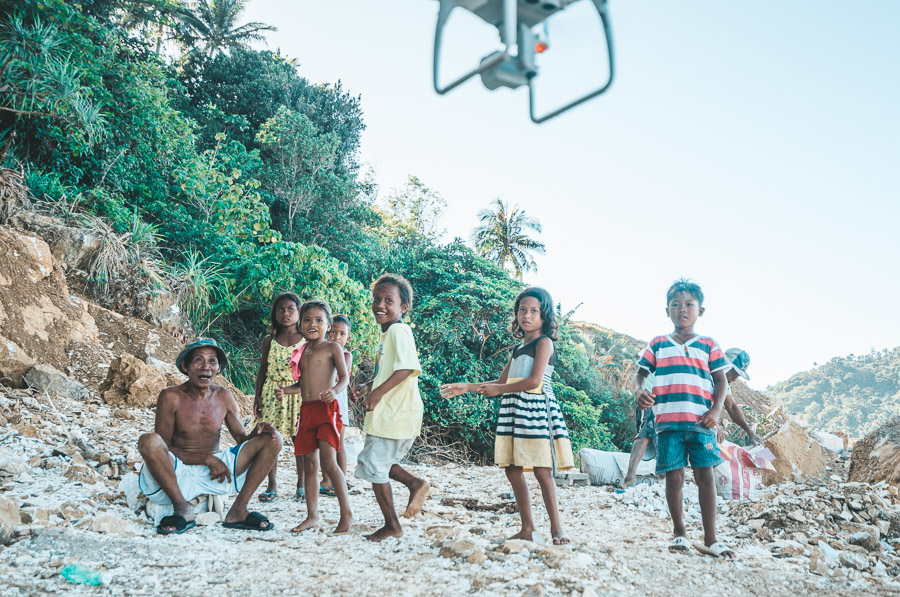 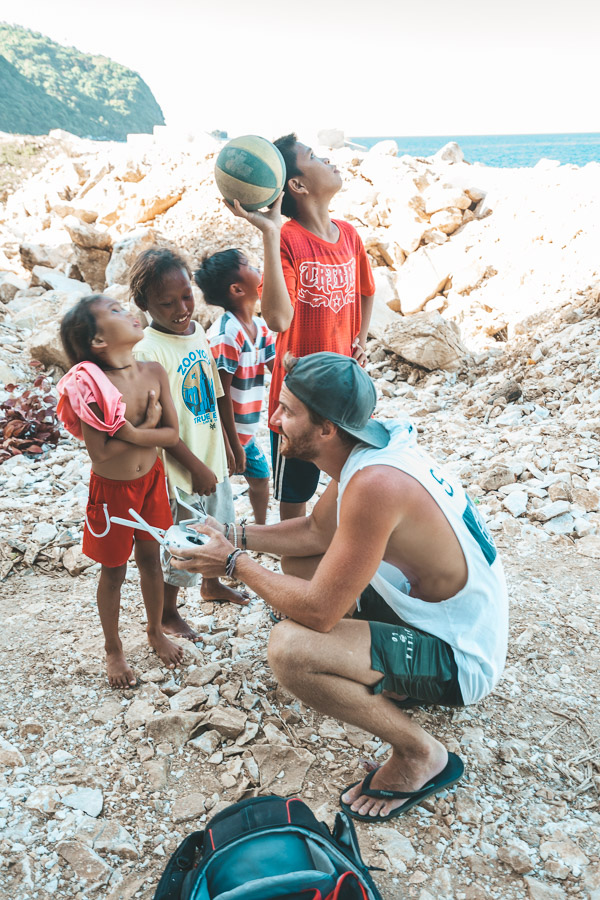 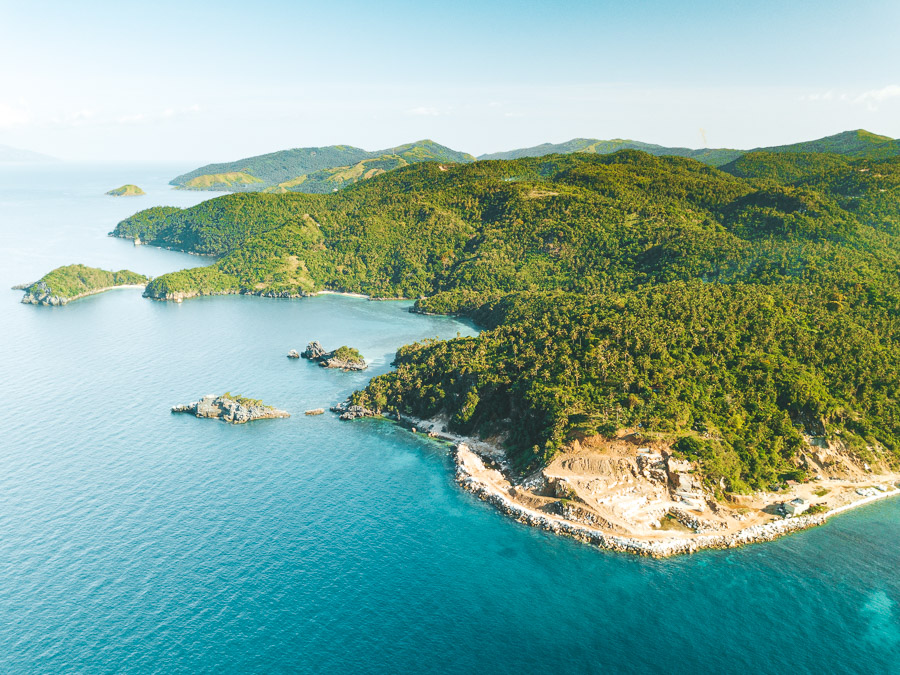 We played lots of little games with the kids and I tried my best to get by with my ten words of Tagalog as we made our way back to the bikes. We thanked Steve and slipped him a few hundred pesos ($4-5 bucks) for his time, although he never hinted at being paid. He just smiled and said Salamat.

That was our Lio Bay adventure. Now we knew where the marble was coming from we were intrigued as to what it ended up being. On the way to Lio Bay, you may have noticed lots of sheds and shacks completely covered in white along the side of the road on the way up the hill. These are where the marble is being crafted into art. We stopped at one on the way back and watched the craftsmen carving and shaping their statues. They were pretty chill and didn’t mind us cramping their style for a little bit as they continued on with their work. 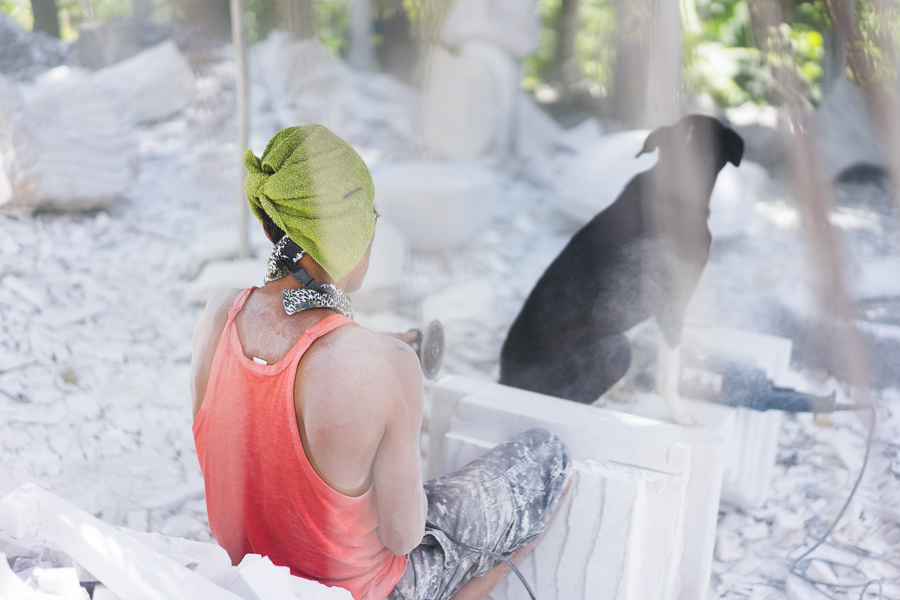 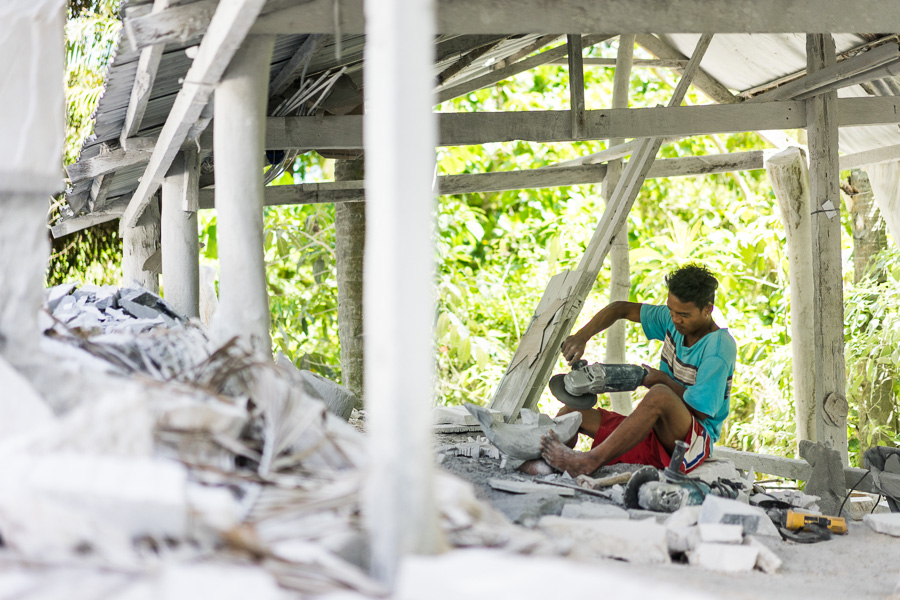 It looked pretty grueling in the heat and they were covered from head to toe in the dust. The rough part is that I don’t think the marble sells for too much. We saw stalls in the town selling marble keyrings with your name engraved on them for just $1-2 USD.  Having seen the whole process of getting the marble out of the earth, I can only imagine what the guys at the quarry are earning. 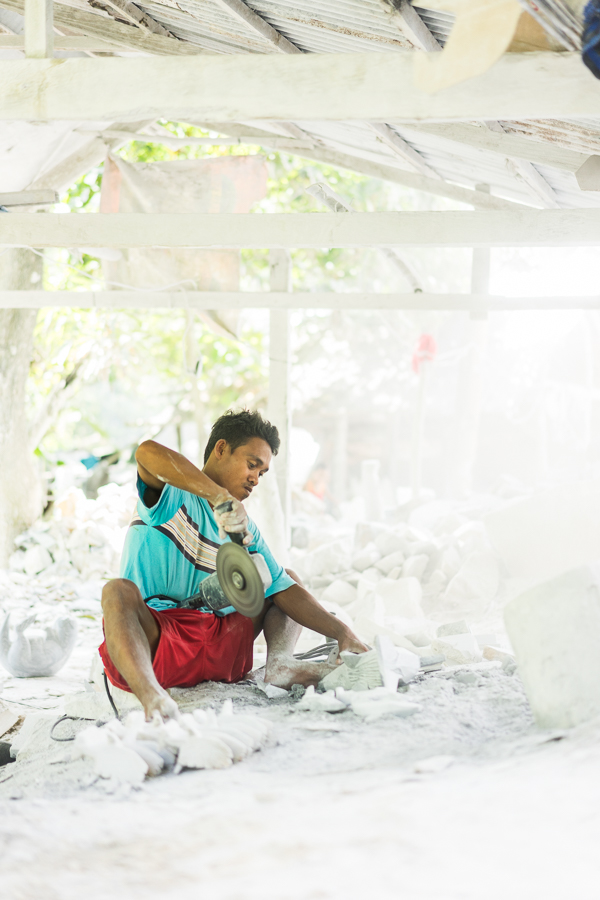 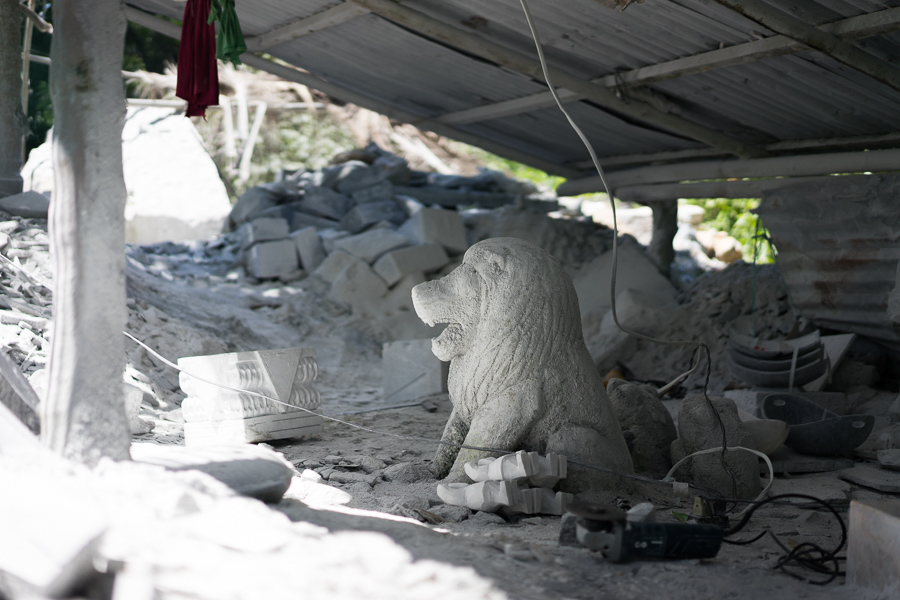 The craftsmen are extremely talented but I’m not one for souvenirs so we thanked them for their time and heading off back after our Romblon marble quarry adventure or self-guided tour haha! 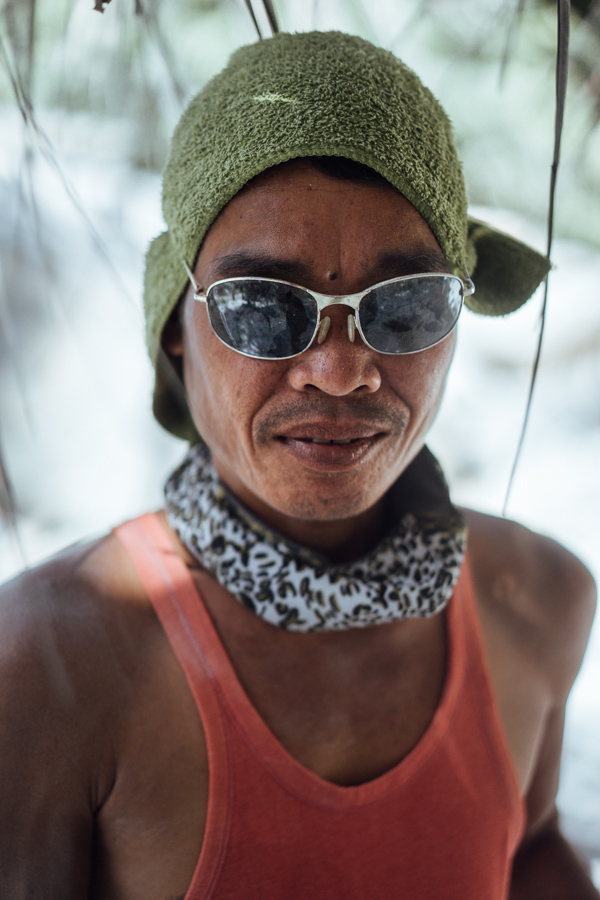 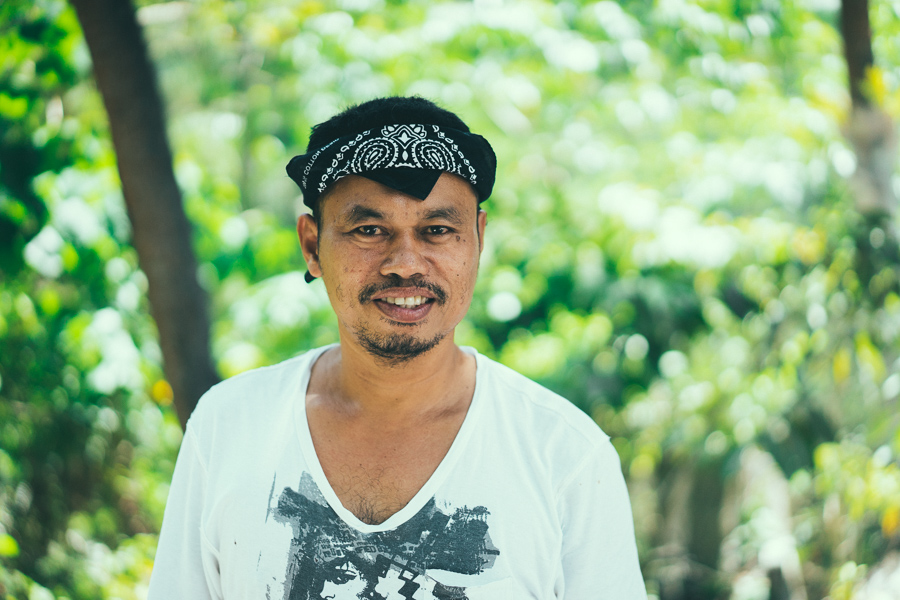 The best adventures are the unscripted ones. We found so many random spots in the Romblon province, while we searched for good drone spots but we ended up meeting some crazy characters!

Hi, thank you for elaborating your trip in Romblon. I spent 10 years cutting marble with Henri Santiago who was my assistant (the guy wearing green headgear in the photo). You can check out what I do on FB: Jodam the Artist.