The island of Romblon is in the province of Romblon, just to clear that up. It can get confusing while you are researching for your trip. This Romblon island hopping experience departs from Romblon Island. The island has so many amazing beaches like Bonbon, Tiamban and Talipasak but if you want to get on a boat and go exploring, there are some true gems nearby if you head out on a Romblon Island hopping tour to Alad, Cobrador and Lugbon.

We stayed at Stone Creek House, which is a boutique apartment in the middle of the town (Poblacion). You can check it out by clicking this link to the Airbnb listing for Stone Creek House. It was our base for our five days on Romblon Island and Carlos, the owner, also organized our motorbikes and island hopping experience.

Save money in Romblon by staying at an Airbnb! Get a FREE $40 Airbnb Coupon by using my code when you book!

Carlos organized our island hopping tour at the local price of 1500 pesos for the entire boat and a day of island-hopping at our leisure. The price of the boat was fixed. We were only two people but if we had of brought ten people the price would remain the same. 1500 pesos was equivalent to $30 USD, which made it $15 each for an entire boat to two of us! Pretty good for not having a group. This included a pick-up and drop-off to the port, which was only a 10-minute walk anyway. Lunch wasn’t included but we bought some fried chicken, rice and drinks in the town before we left for just a few dollars.

Our first stop was to cruise along the coast of Alad, an island about 20 minutes from Romblon Island. We had heard about some caves but like all good things in the Romblon Province, we had no idea where they were. I don’t think we found the caves we had been told about but we snorkeled along the coastline and found some pretty cool caves of our own!

We jumped off the boat and climbed deep into the back of this cave that seemed to go on forever! 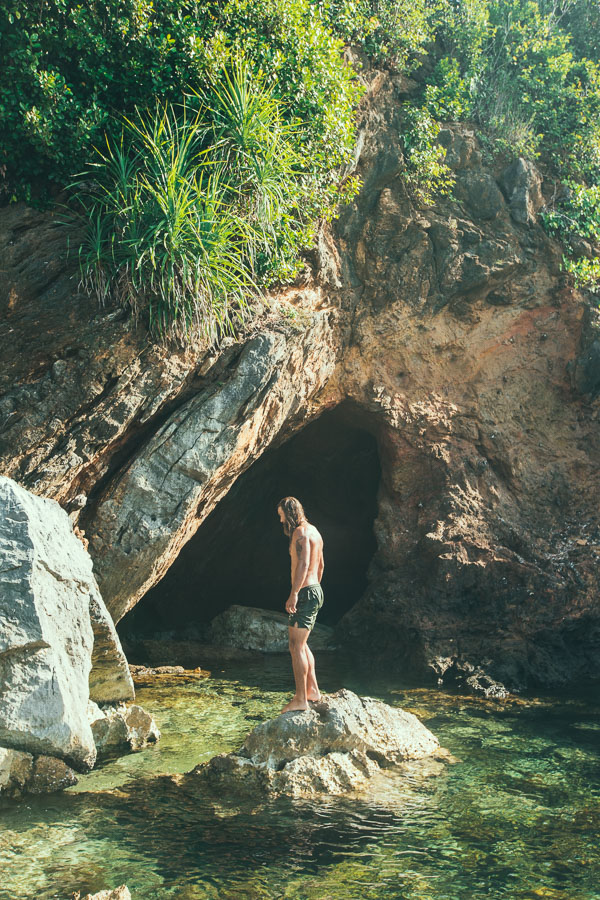 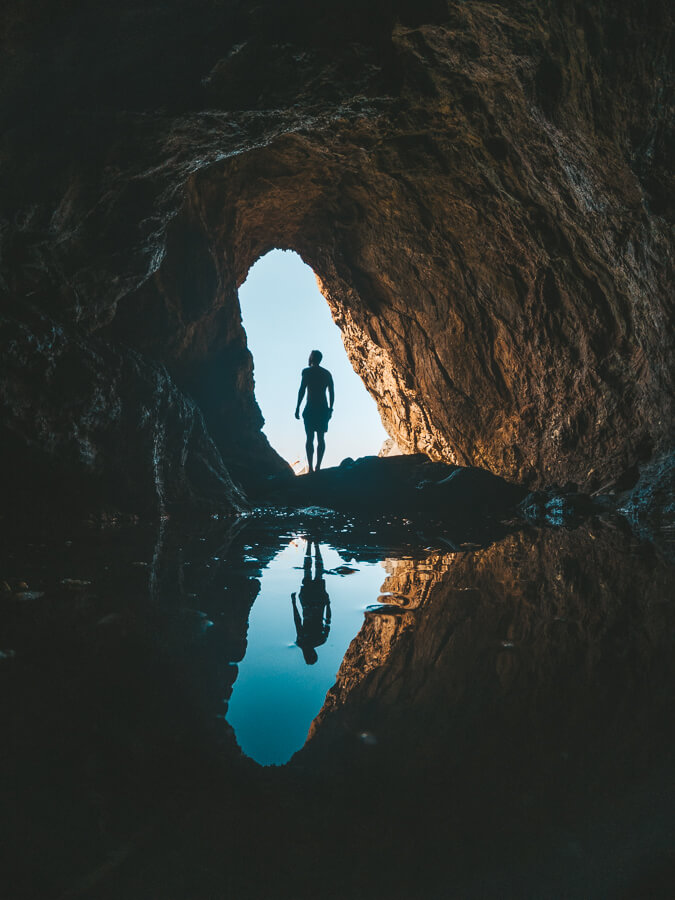 We continued our cruise on the boat. Laying out in the sun, I took in the beautiful rock formations and the cliffs as our fishing boat made it’s way to our next destination, Marakay Marakay cliff jump.

I think I found heaven. Marakay Marakay cliff jump was an island purely dedicated to a diving board. Our boat pulled up right next to the island, where cement stairs are built into the island. Normally with cliff jumping in the Philippines, it is a battle to get back up the cliffs and to avoid cutting yourself on the sharp rocks. At Marakay Marakay it can’t get any more convenient. From the boat, a pathway leads right up to the diving board. Jumping off, swimming to the stairs and climbing back up to the board was a circuit I completed multiple times. This was a spot I wasn’t expecting on our Romblon Island hopping tour but what an epic spot to enjoy all to ourselves for over an hour! 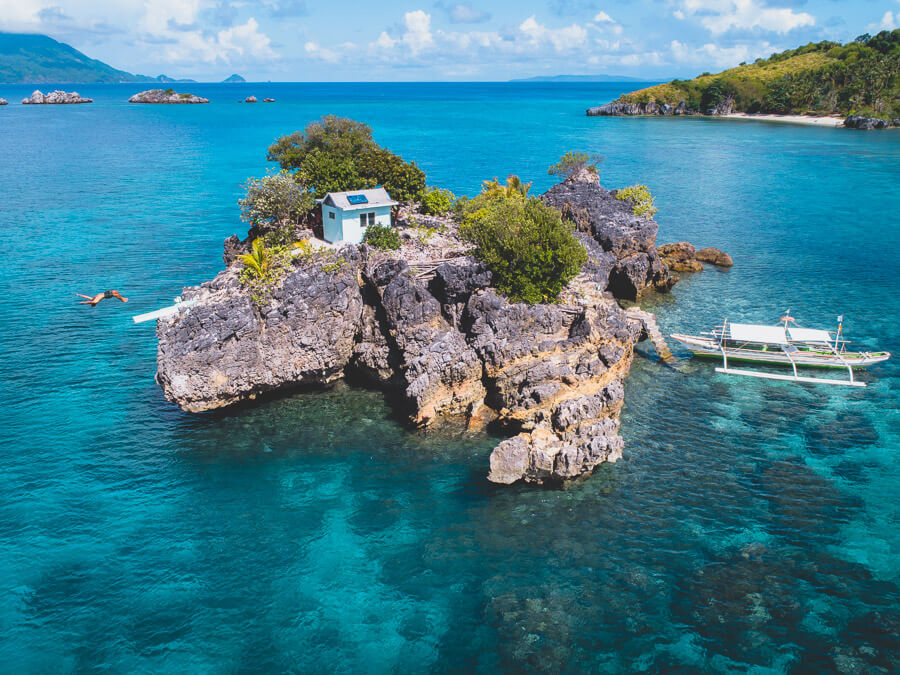 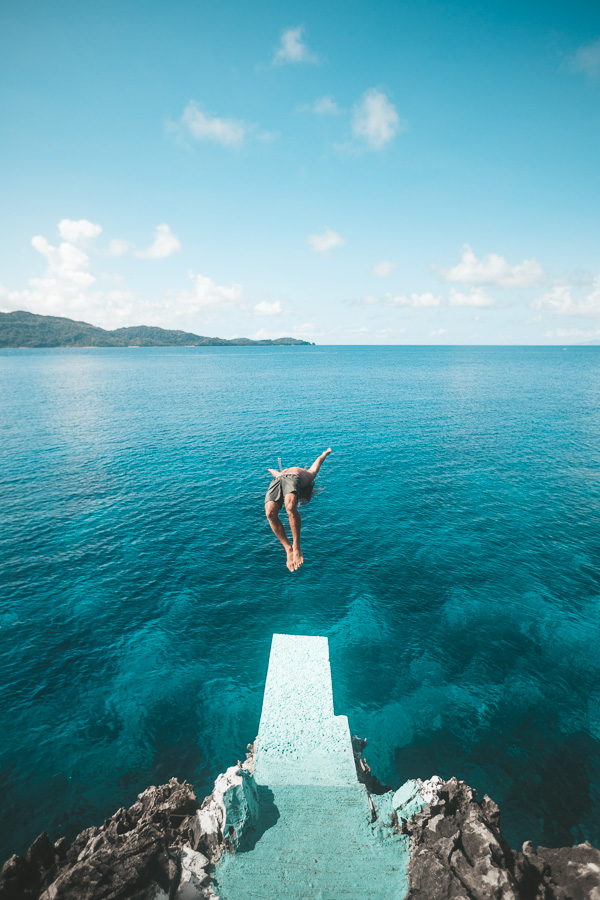 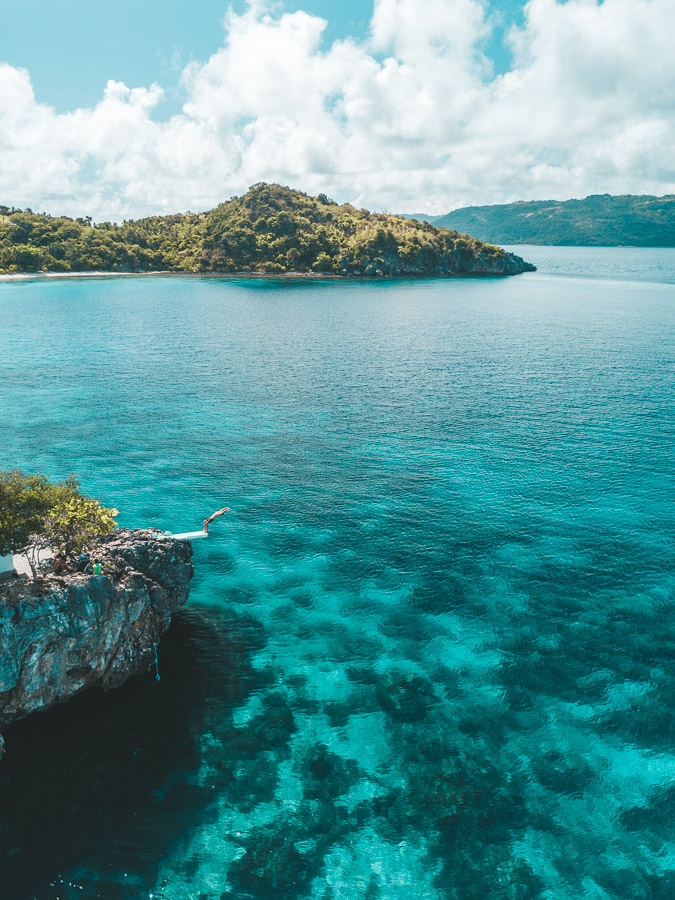 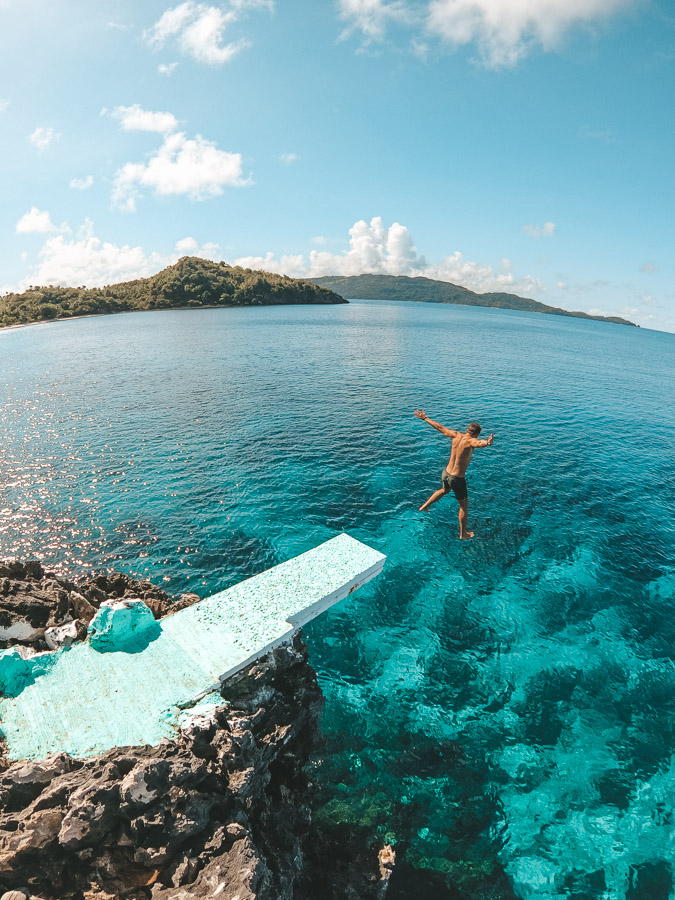 The beaches surrounding the Marakay Marakay cliff jump were also beautiful but we didn’t explore any. I enjoyed them from the drone but our captain preferred to continue on to Cobrador Beach although he told us we could’ve stopped at these beaches if we wanted to. 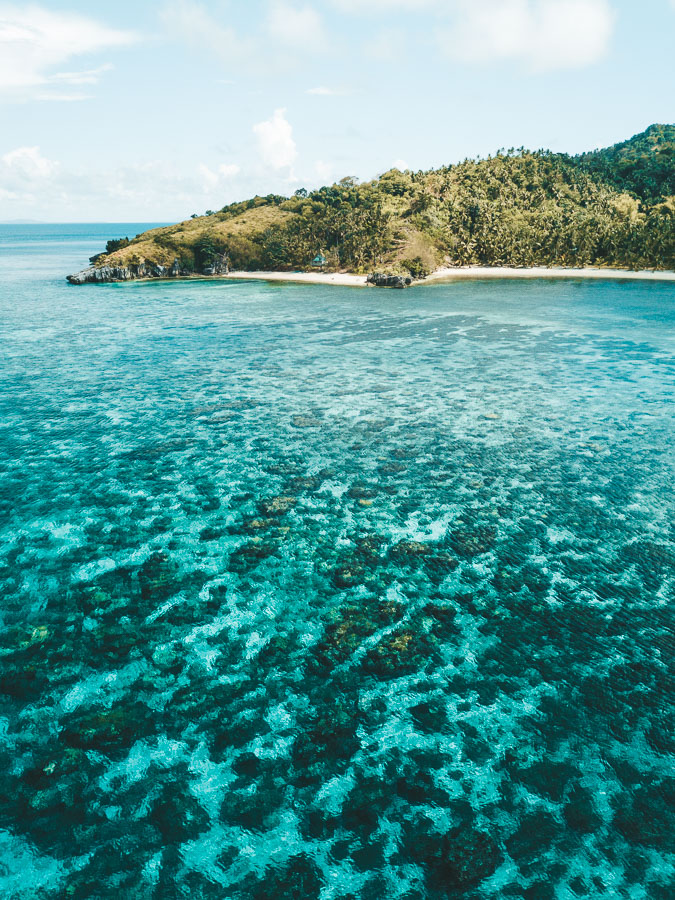 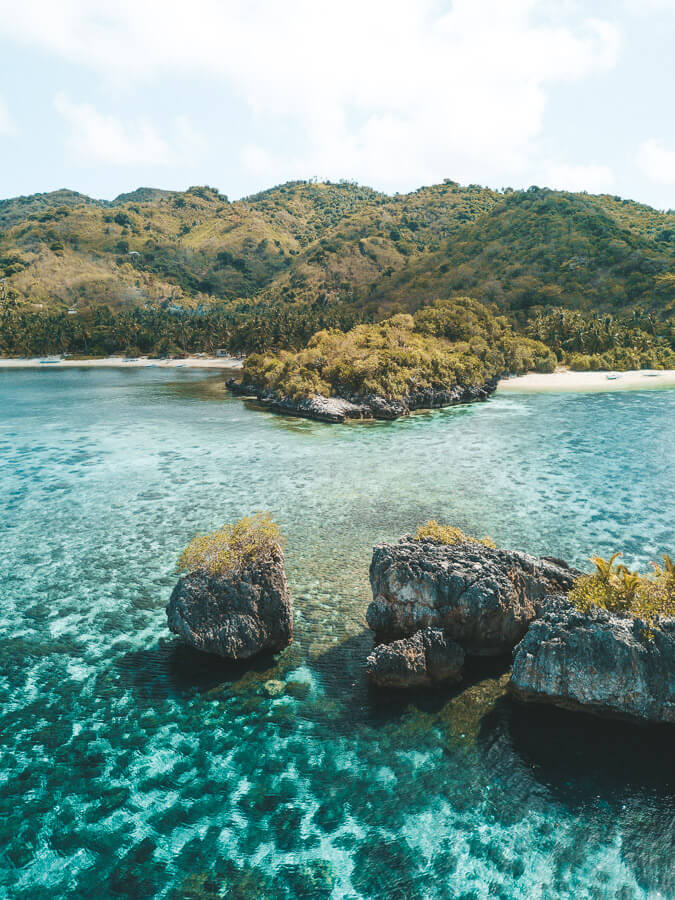 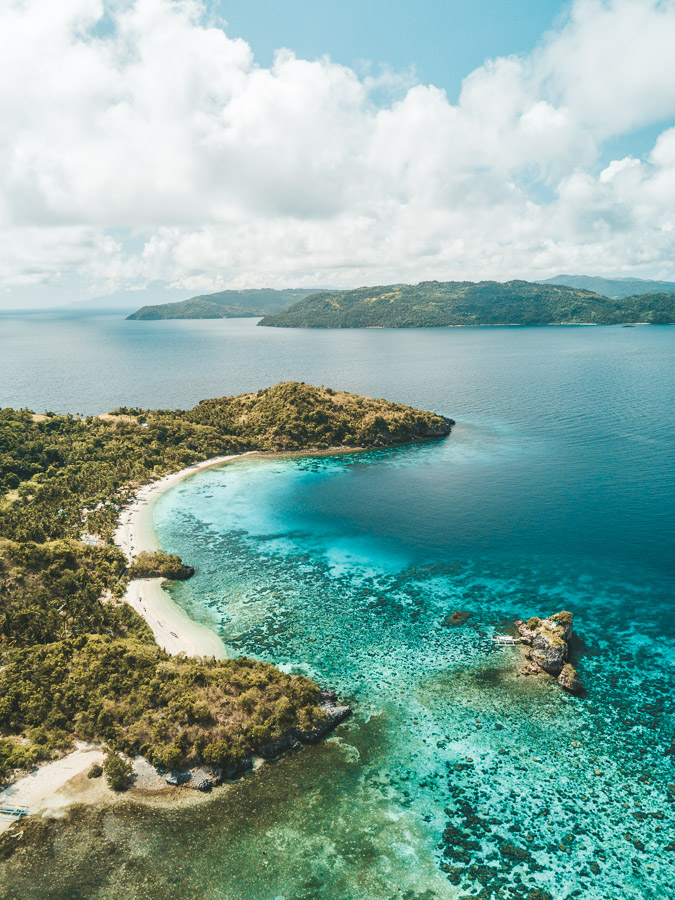 After our cave explorations and cliff jumping it was time for some beach chills. How about an entire stretch of coast to ourselves? Cobrador Beach was beautiful, with crystal clear water and mountains in the distance. Cobrador Beach is often referred to as Naguso Beach, which is the local name.

It was eerily quiet, no people on the beach, no vendors, no one at all. We almost didn’t know what to do! We took a seat and just took it all in. Island hopping to a remote island, from an already pretty remote island. Sun is out, water is transparent and life is good. 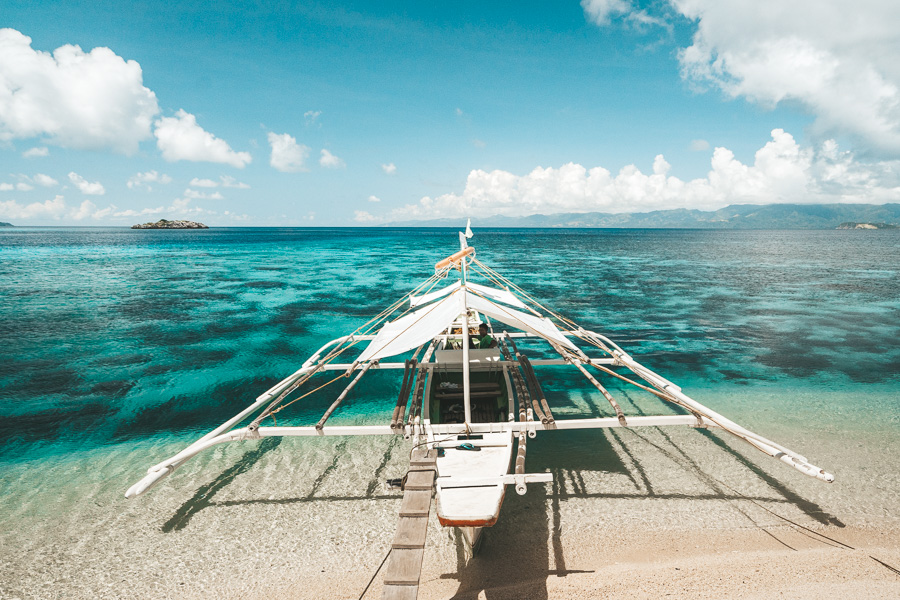 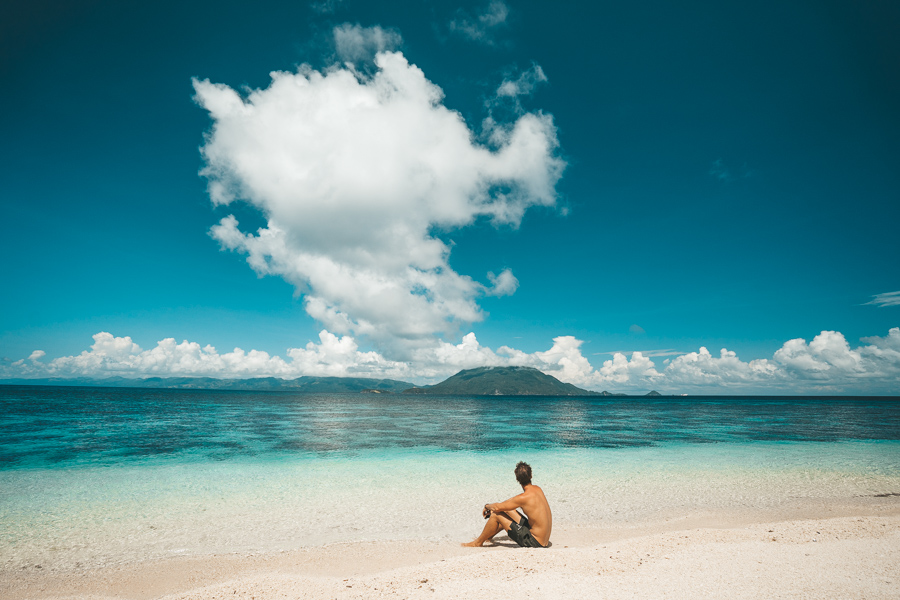 On Tablas Island, we had island hopped in Calatrava, and during that expedition, we visited Tinagong Dagat. This had me confused because we were told we were visiting Tinagong Dagat on this trip. In fact, Tinagaon Dagat, means ‘Hidden Sea’. That made sense because just like on Tablas this natural attraction was hidden from the ocean as we cruised past.

Our boat docked and at a small beach and there was a bit of a rock wall and some cliffs. We couldn’t quite figure out what the situation was. After jumping out of the boat we climbed through a small arch and into a bit of a lagoon. We then headed through a cave, which opened up into a tiny lagoon or ‘Hidden Sea’. It was amazing to sit in what is essentially a natural hot tub in peace while listening to the waves smashing into the walls on the outside. 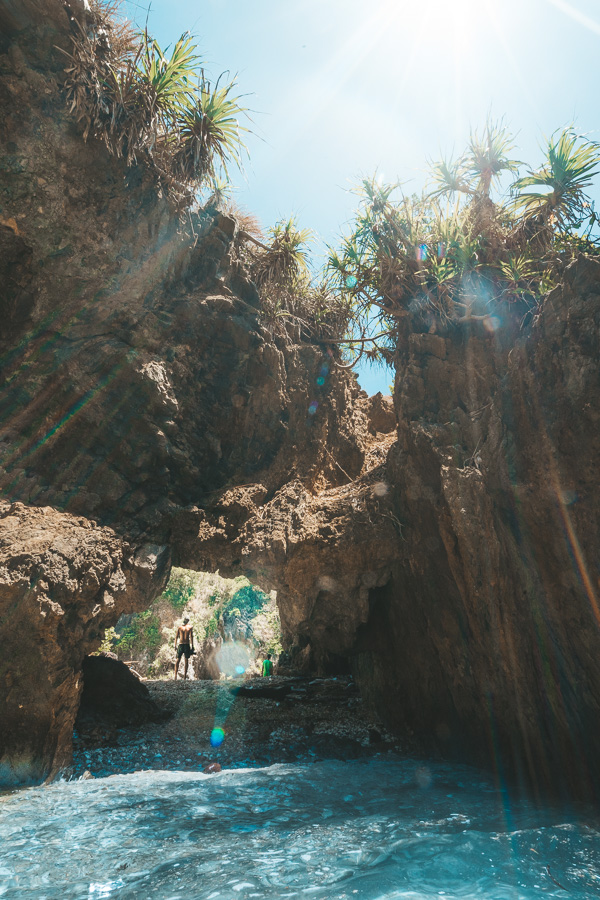 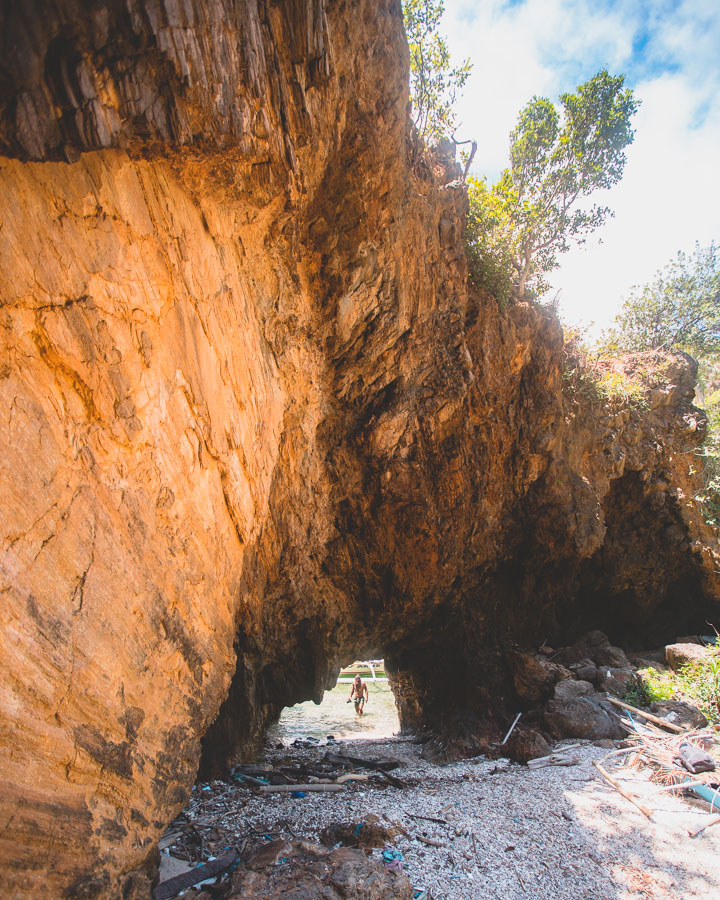 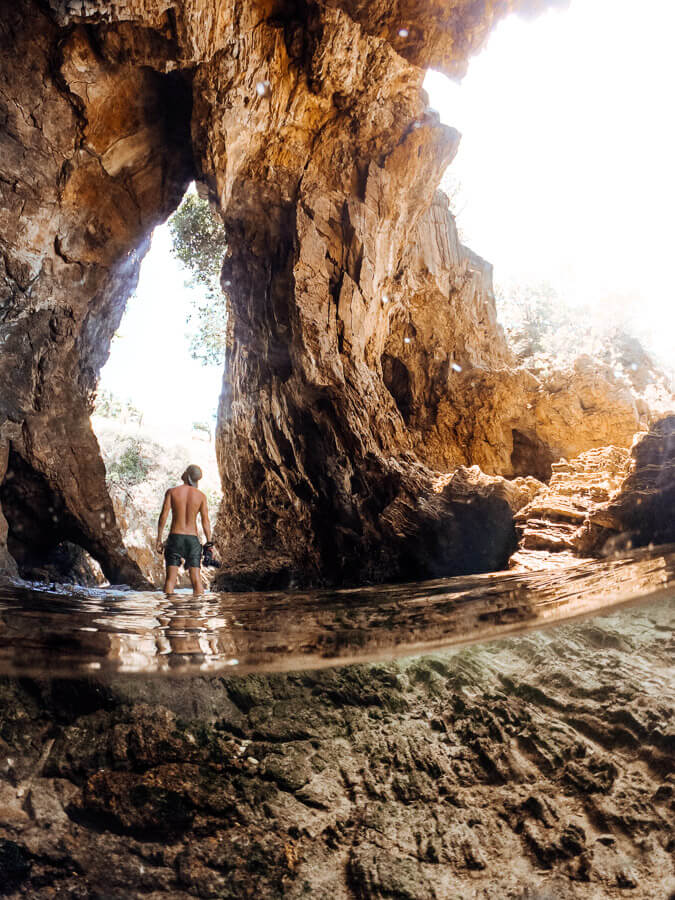 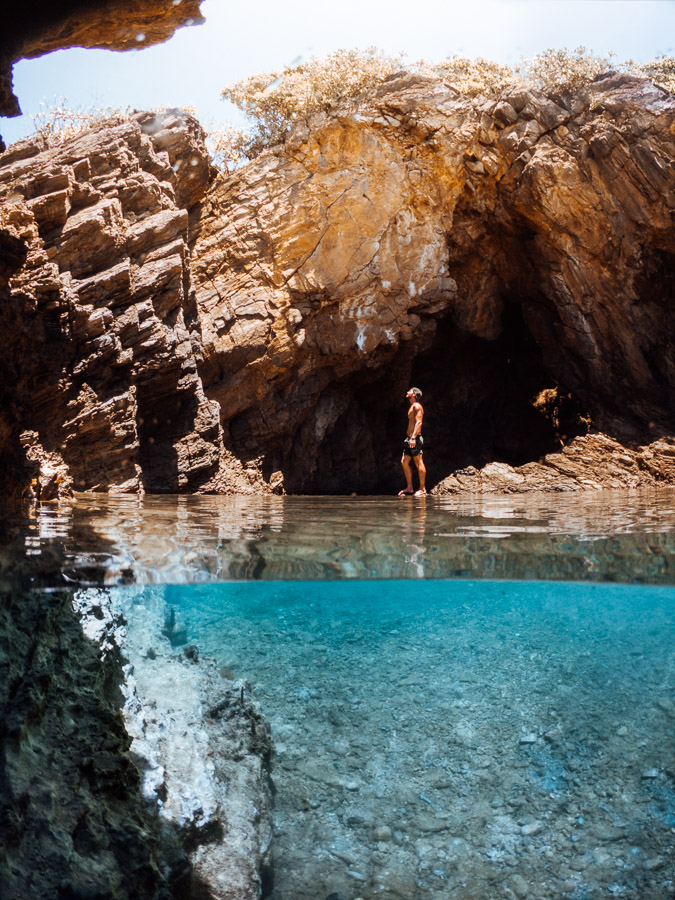 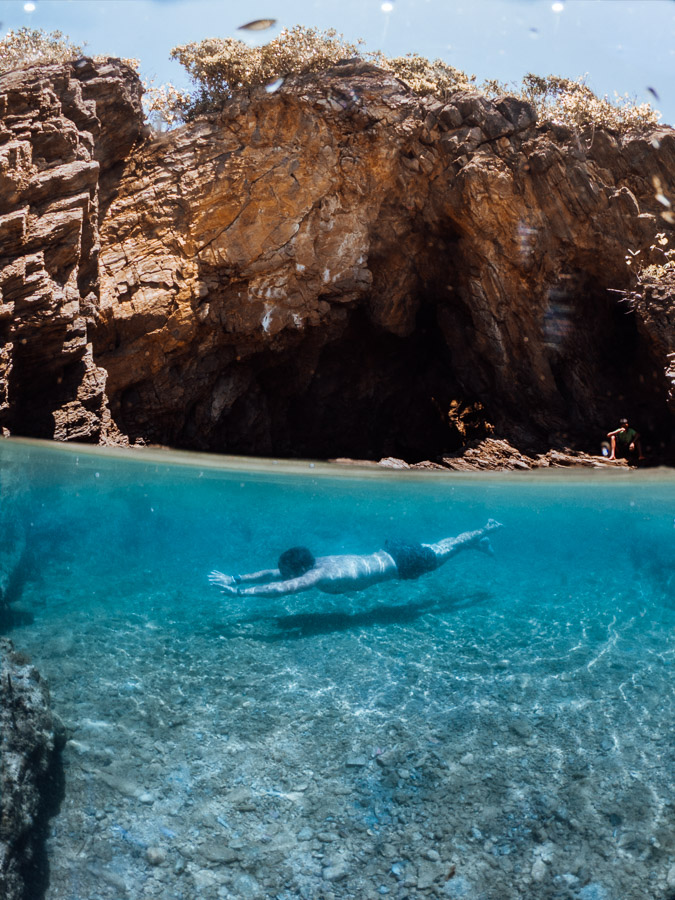 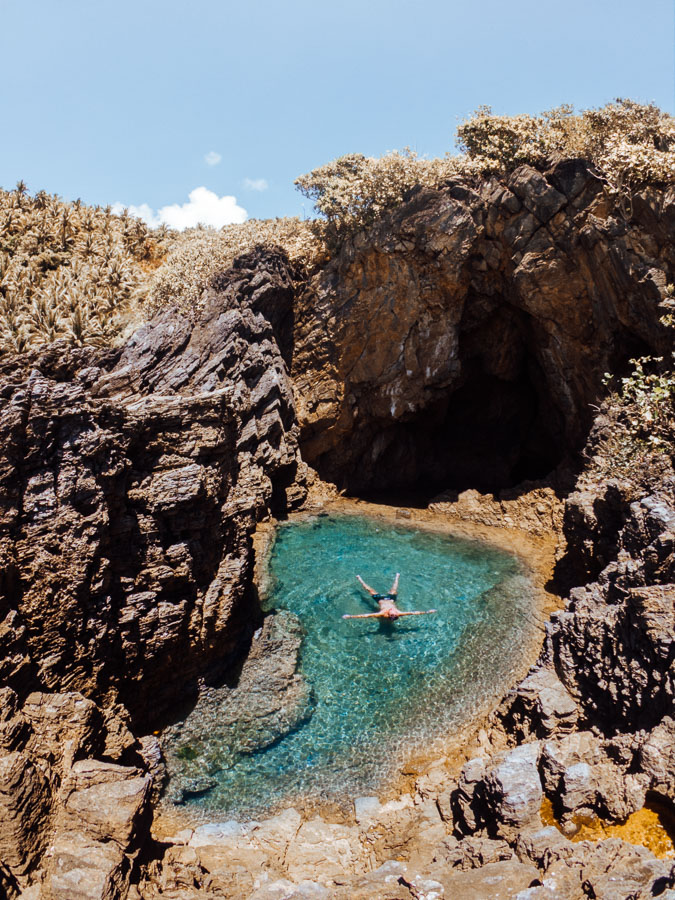 Adventuring is hard work! It was time for lunch and we had circled back to be close to the Romblon Island Port. However, we stopped off at Lugbon Beach to chill under the palm trees. We had brought our fried chicken and rice for lunch. Sitting under the palm trees on the sand, we chatted with some locals who were selling coffees and pastries, which made for a perfect dessert.

The palm trees on Lugbon were epic and reminded me of some of the island hopping in Coron. Further down the beach was a cool bamboo pier that I believe was being used for supplies to the massive hotel that is under construction. 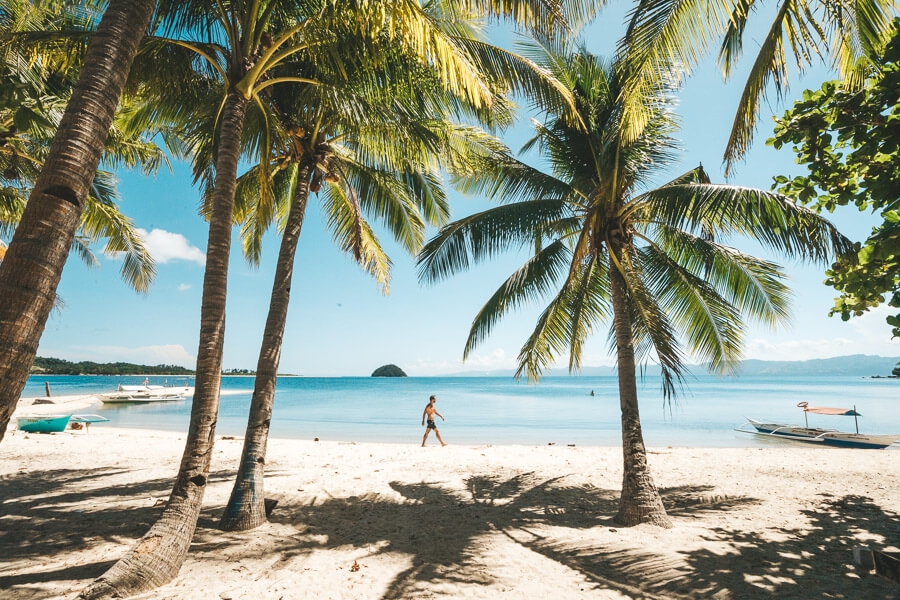 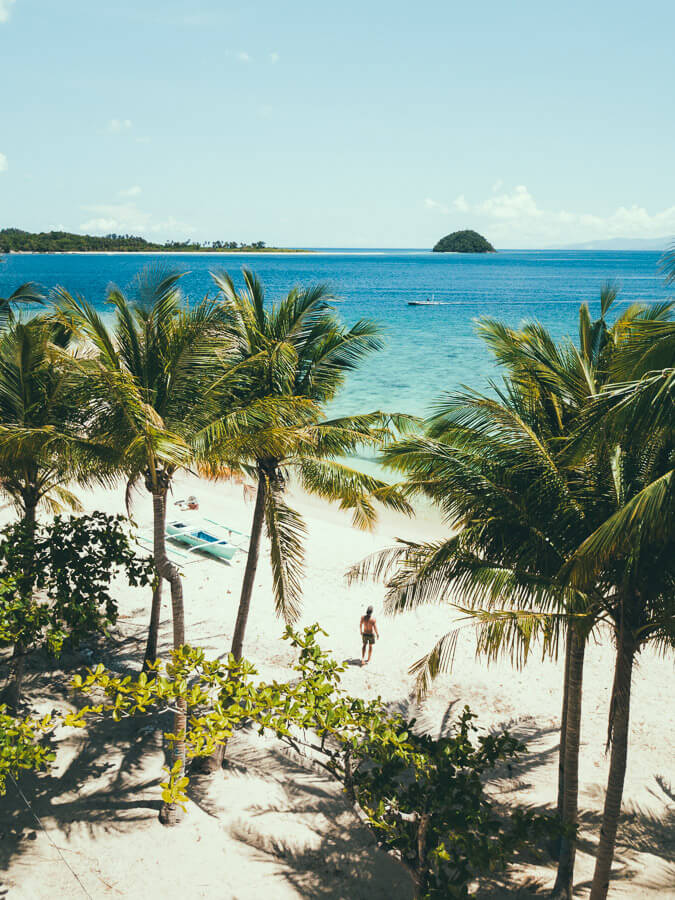 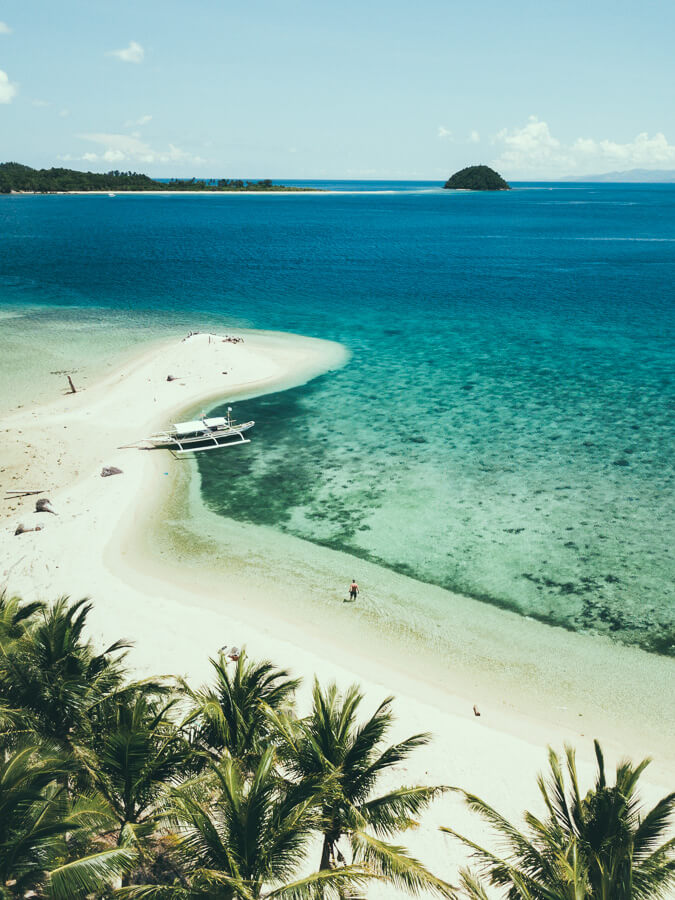 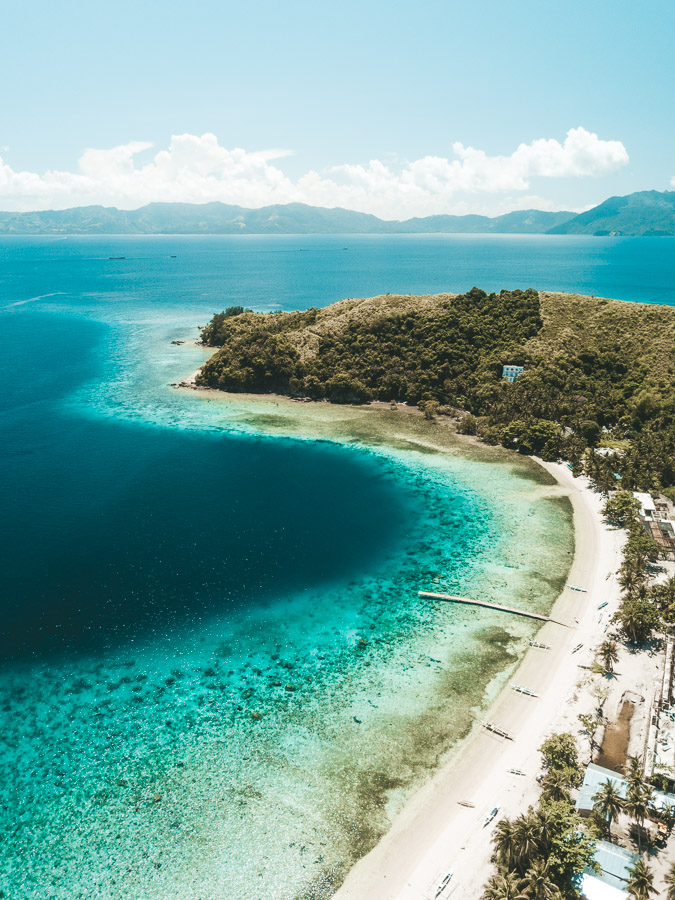 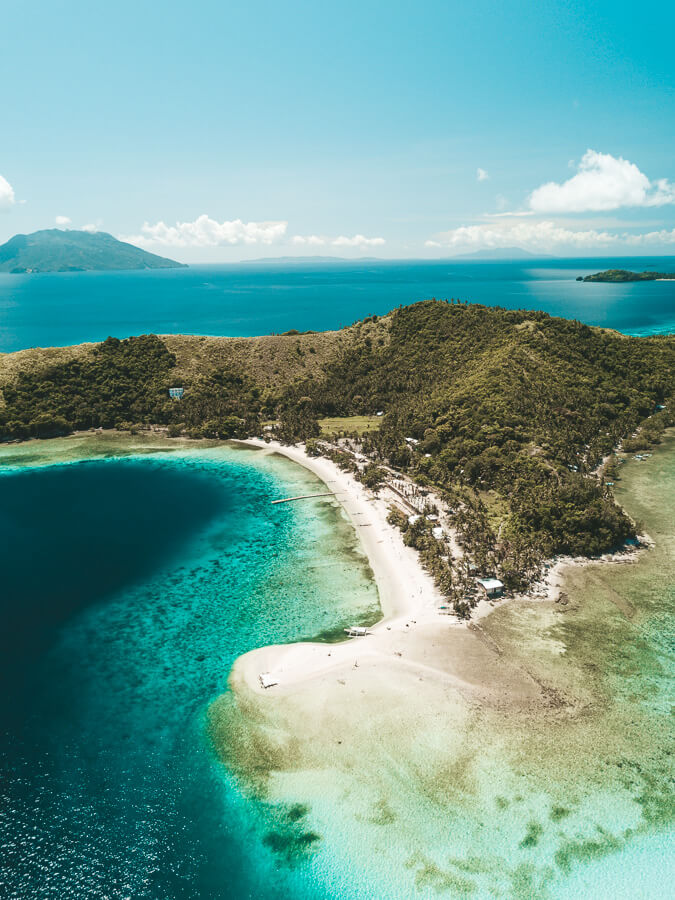 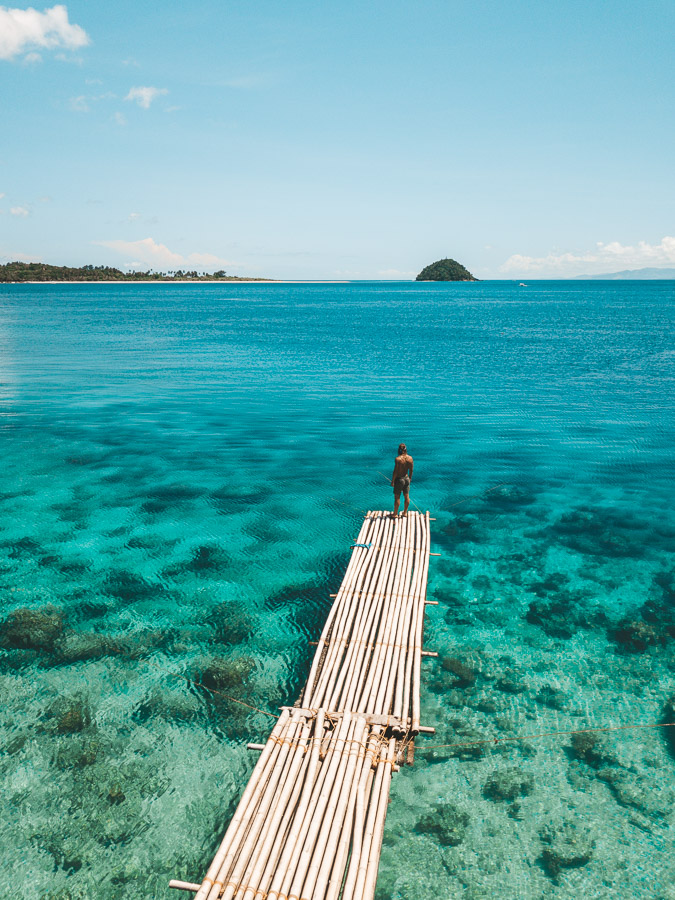 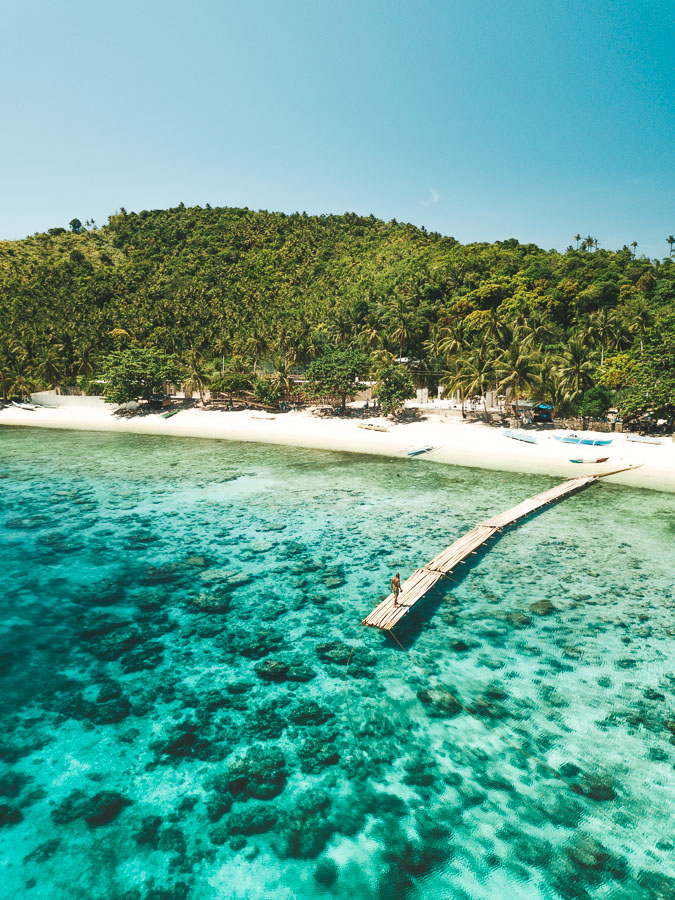 That was the end of the Romblon Island hopping tour for us but we did have the option to shoot over to Bonbon Beach if we wanted to. We had already been as its accessible from Romblon Island mainland but it’s definitely worth checking out if you haven’t been yet as it is rated the #1 beach in the region.

The main drawcards for the beach are the crystal clear water but mostly the sandbar, which links the island of Romblon to a Bang-og Island. It is possible to cross the sandbar to the island at low-tide but you must be careful not to get stuck out there when the tide rises and the sandbar becomes submerged. At high tide, the sandbar is about waist deep and at low tide, it is obviously full exposed. 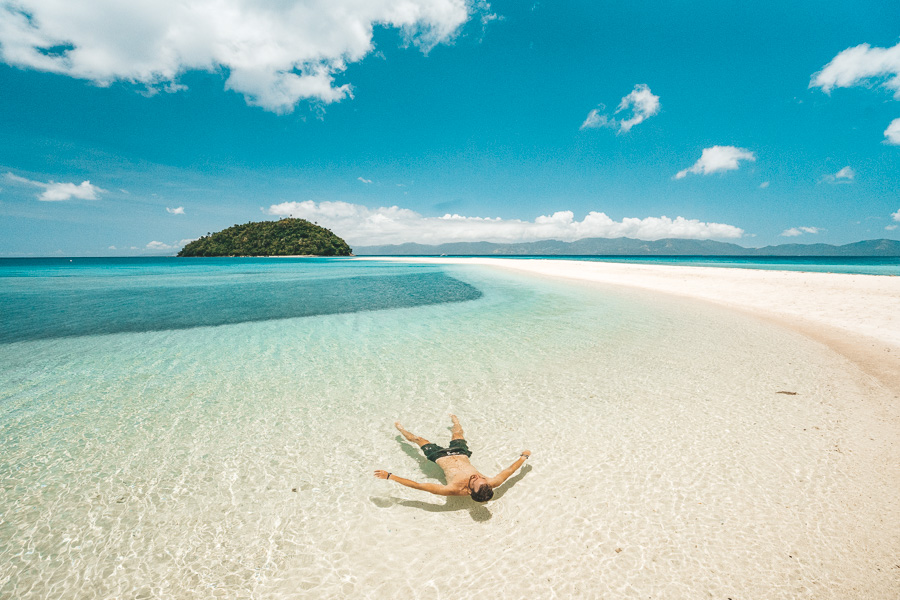 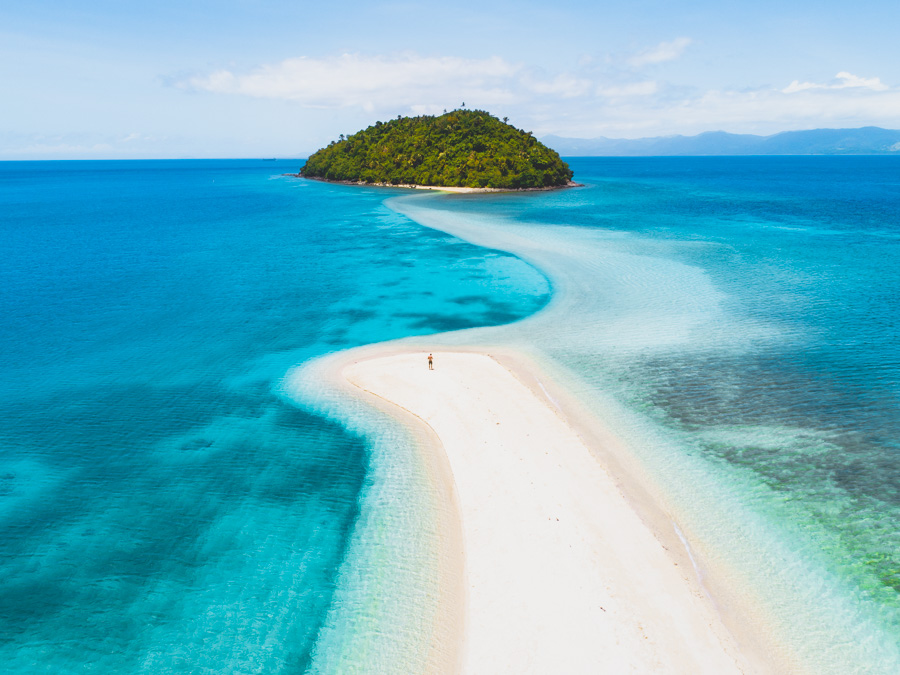 Photos look great! Would appreciate contact details of Carlos so we can do the same boat tour. Thank you!

17 THINGS TO DO ON ROMBLON ISLAND, ROMBLON: THE BUCKET LIST – EXPLORE

[…] We stayed at Stone Creek House, which is a boutique apartment in the middle of the town (Poblacion). You can check it out by clicking this link to the AirBnb listing for Stone Creek House. It was our base for our five days on Romblon Island and Carlos, the owner, also organized our motorbikes and island hopping experience. […]

Good luck with your backpacking and adventures. I will be a follower.

Do you have a contact number of the person arranged your island tour? My friend and I are going to Romblon next week. Thanks!