One year ago I started blogging. One crazy, long year ago. I was still in University on Oahu, Hawaii, finishing my degree in Journalism. Feeling like university wasn’t doing it for me I was hanging out at the back of classes writing articles and editing photos in between pretending to listen to teachers during mandatory Spanish classes. I had a dream but I didn’t know what it would become.

You might be asking why only 39 weekly articles if a year has passed. The answer is for the first 3 months of the blog we were living on Oahu and we only began the weekly reviews once we began traveling. The tradition has now lived on.

The blog began as a duo. It was originally Jess and I. You can still see her photos and articles all over the blog and we still keep in touch. However for the best part of a year it has been me, myself and I.

This is the story of Journey Era and the craziest year of my life.

After months of hard work and the help of a few friends, I managed to get the site up and running. I didn’t know what coding was. I didn’t even know how to add a category to my menu bar. To be honest, I was clueless and I knew it. However, I don’t give up. I spent all of my spare time discovering the world of blogging. How to do format this, how to optimize that. Despite far too many setbacks I was adamant I was going to make it work or atleast go down trying.

Thanks to Dave from Mynakyne my go-to man in the early months. I met Dave through Instagram and he would meet me each week at a Starbucks on Oahu. Thanks for giving me more guidance than I could have ever asked for without ever asking for anything in return. If it wasn’t for Dave I’m not sure the blog would’ve ever hit the internet.

12,000 page views on the blog in the first month. I had no idea if that is good, terrible or abnormal.

I was beginning to make a few inroads on Instagram. Brands are beginning to reach out to me offering me free gear but not too much paid work has arisen yet. 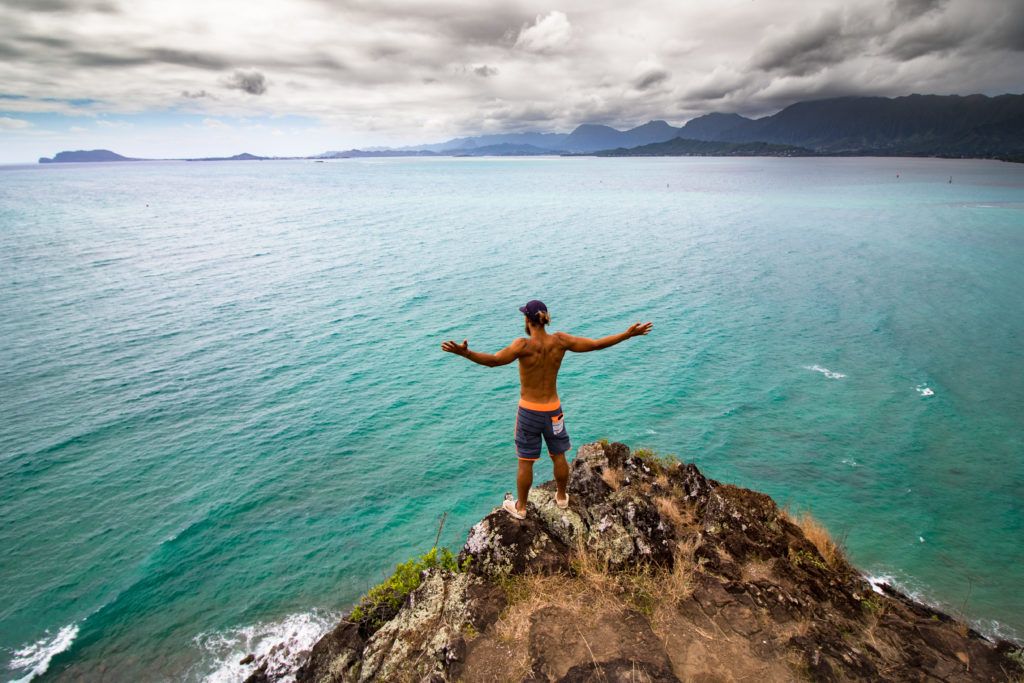 We began traveling in Indonesia and did the first sponsored hotel stay on journeyera.com at a fancy yoga resort. At this stage we are blogging about beaches, adventures and general things to do. Our Oahu content is picking up traction and being ranked in Google. This wasn’t a mistake. Hours of effort had gone in to understanding how google and SEO worked.

We are now in Vietnam and I have been invited on a press trip to Indonesia with the Tourism Board. I didn’t apply they just plucked me out of nowhere. I met some incredible people who taught me a lot. The experience was unreal and showed me that people are actually blogging as a career. However, I also met people on the trip who were working full-time and blogging. I was determined to survive year one of blogging without having to work. Although my bank balance was slim and this was a risk, I decided the worst case was to return to Australia and work for a few months before continuing. 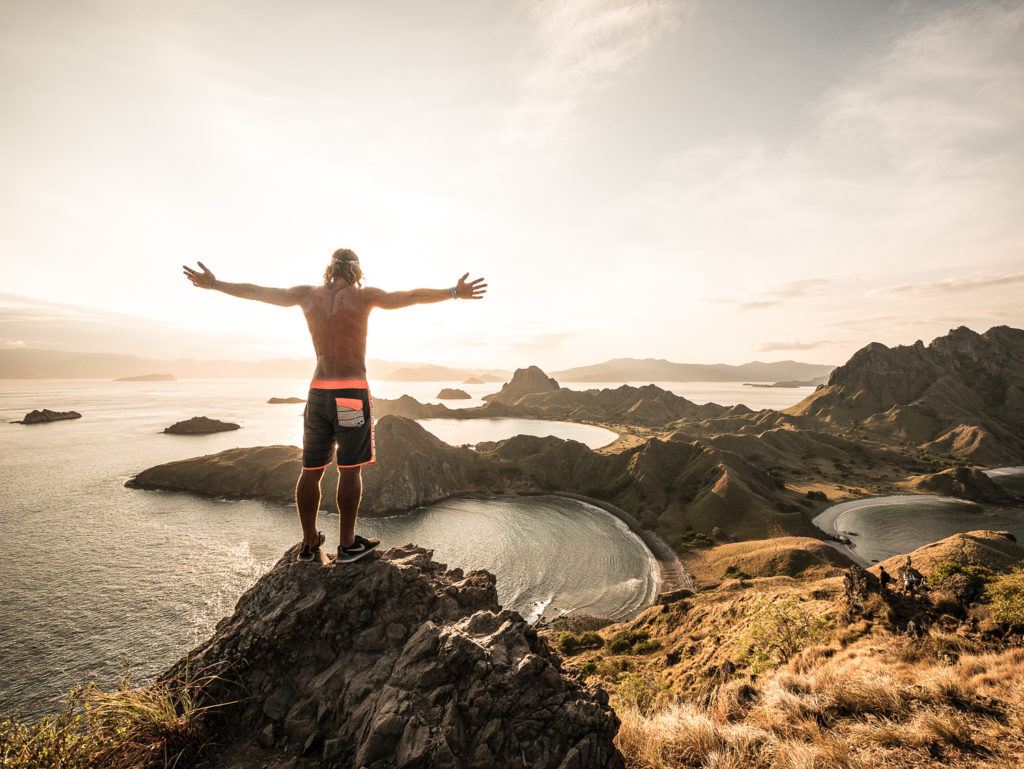 Jess and I decide to head in different directions. We both head to Thailand but say goodbye for good. I couchsurf for the first time and embark on my new style of adventuring: solo travel.
I experience many amazing, moments of feeling free and on top of the world. However, I also struggle finding my way as an invisible traveler in a foreign country. I quickly learn the ropes of solo travel and how to deal with and enjoy the huge amounts of time in my own head. Sometimes in Thailand I didn’t speak to a single person for a few days other than when I ordered lunch. I was hiking, rock-climbing and adventuring. There is a certain thrill of knowing that if you get lost, no-one is coming looking for you. 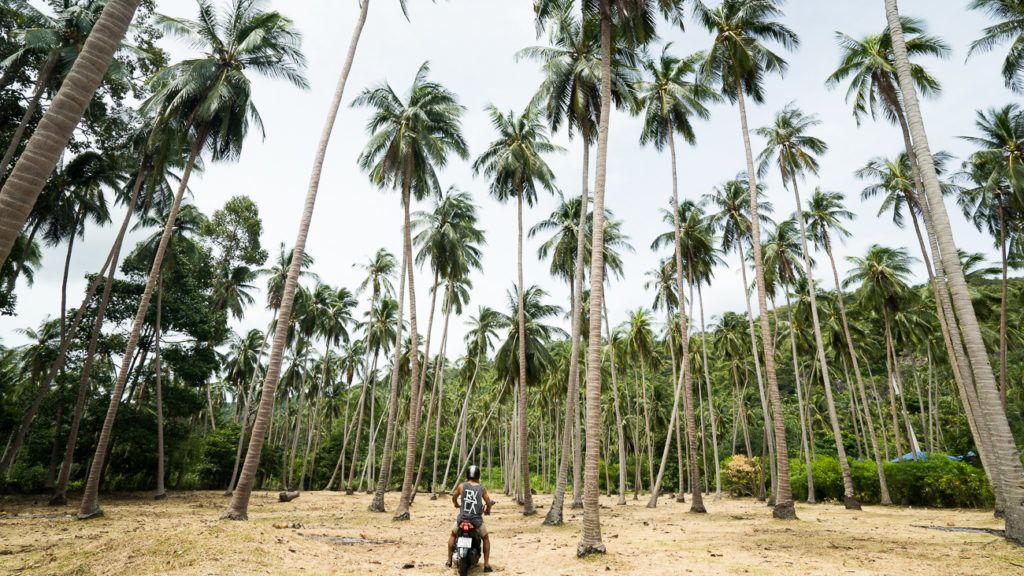 I embark on the backpacking adventure of a lifetime, linking up with my friend Jorden in the Philippines. Making it up as we go, we explored the best the Philippines has to offer and got the attention of the Philippines Tourism Board. During the month I did a small 3-day press trip on the island of Coron, which was unreal. Jorden and I had our own private boat and room at the resort. Breakfast, lunch and dinner were served with copious spreads and we felt like kings thanks to Casa Fidelis. Some of the places I stay at or work with are just that work. But many places like Casa Fidelis turn out to be so good that I send my parents there to check it out. They are visiting in a couple of months for the Casa Fidelis experience.

I was now in the full swing of solo travel, despite often being joined by others or meeting people along the way. I was adventuring during the day, and working my ass off during the nights. My Instagram and blog look like my life is all play, but if you travel with me you may soon become annoyed at my need for wifi and cafe work sessions. The world began to take notice and the visitors to the blog began to increase. 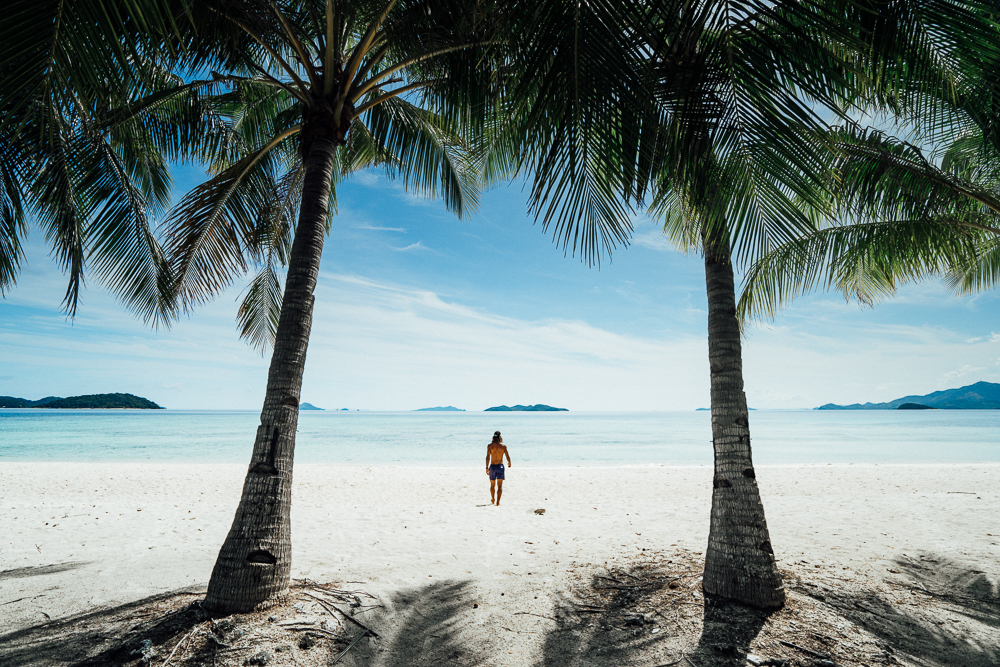 I take a break from the beaches and head inland to Cambodia and Laos. Here I explore the history of Cambodia and the culture of Laos. Without the waves and beaches to explore I begin to shoot the people (with a camera), who captivate me far more than the temples.

My aim was to make $800 USD per month while traveling to survive. I never aimed to make a profit or to generate any savings. I wanted to know if it was possible for me to travel continuously without spending any money.

By this stage I was making enough from sponsored posts on the blog and Instagram along with content creation to cover that $800 mark each month. In fact throughout the entire first year there was only one month in which I wasn’t able to at least hit the $800. Keep in mind I wasn’t on the type of holiday most people enjoy over christmas. I was enjoying my days but working hours on end during the night. Some days I would sit at the hostel on the computer from 7am til midnight. I once had a bartender tell me to enjoy my life after he watched me sit on the computer all day. I smiled and thanked him for his concern. 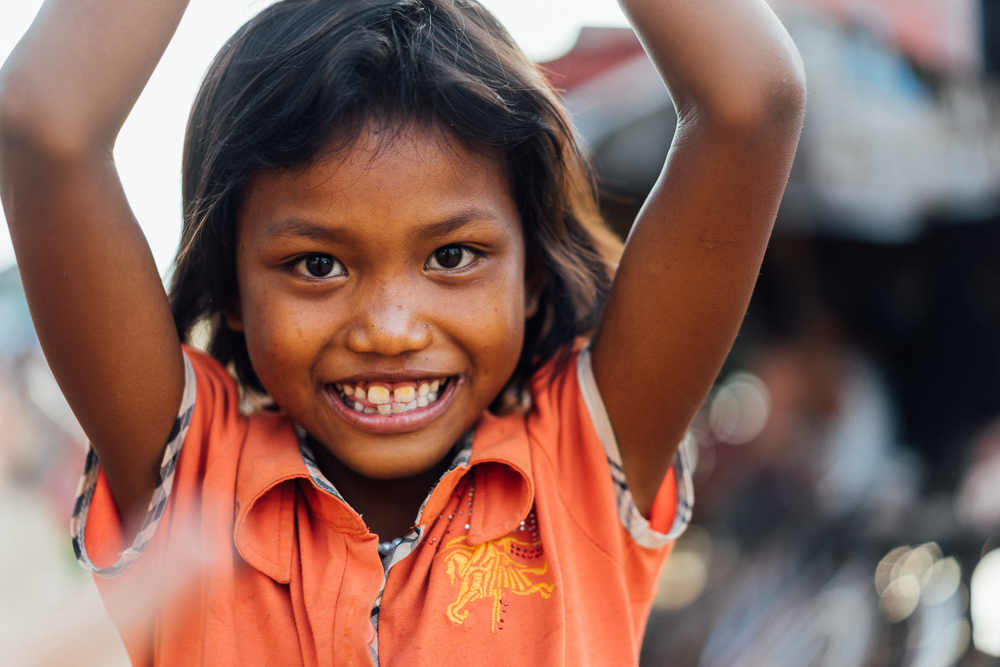 I head home to visit my family and spend the christmas in the Australian summer. I would have left to begin traveling again sooner had I not had a good friend decide to come and visit from Hawaii. I used the time at home as an opportunity to work on some of the boring facets of promoting the website, work with a few brands and explore my home state of South Australia. 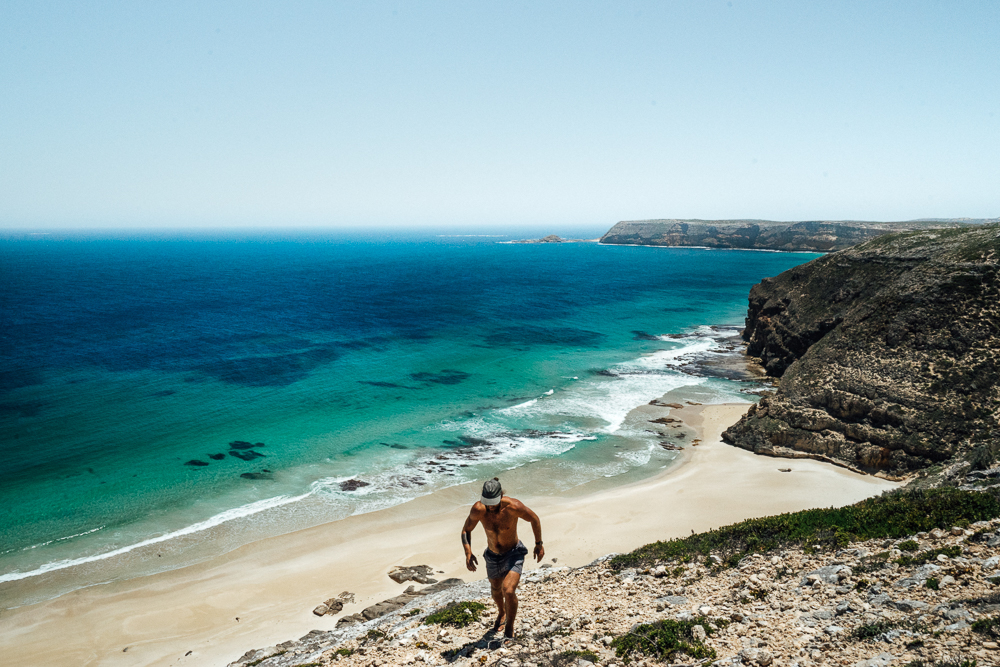 I was selected by popular vote on another press trip. This time it was to Kerala, India and it would be my third press trip of the year. One more surprise press trip would follow directly after. Before India I traveled to Indonesia and Sri Lanka enjoying the beaches, and continuing to grind away. There were so many times during the first year I doubted myself. I still do. But it’s not in me to ever give up. I’m the guy on the plane who falls asleep at their laptop. I am willing to work my ass off so that I am the only boss I ever have. The Kerala press trip was great and we got to explore some unique parts of southern India. I had trouble with the slow pace of traveling with 30 other bloggers but overall the experience was still positive. Once again I met some awesome individuals who I will hopefully link up with again. My Instagram @jackson.groves ticked over to 100,000, which was something I could never have imagined two years earlier. My other account @journey_era ticked over 65,000 followers and continues to grow as a feature account with over 20,000 people using the hashtag #journeyera on Instagram.

I completed a press trip to Athens, Greece. It was my first ever solo content creation trip and it was definitely a unique experience. More details on that trip will come soon. It was my fourth press trip of the year. I also did numerous sponsored hotel stays throughout the year, although I often enjoyed the simplicIty of cheap hostels or guesthouses. 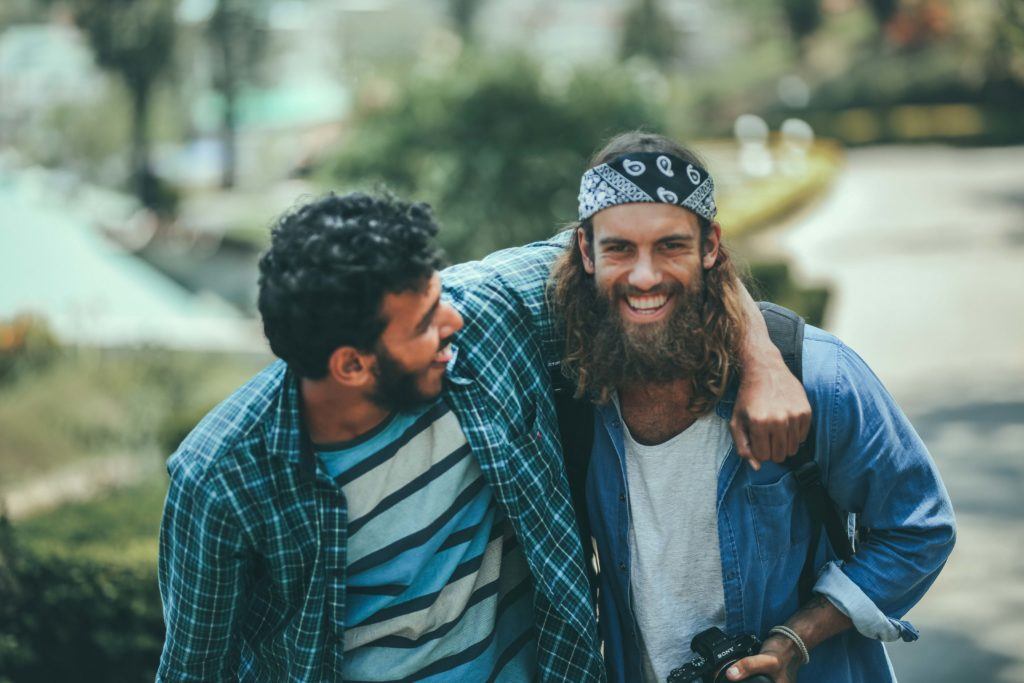 I haven’t monetized the blog as they say. But you gotta eat so maybe I will soon. But for now I am continuing to adventure to new places and am open for anything coming my way.

I don’t really have any goals for the blog. I never really did. I already survive financially so it isn’t about the money and it never really was. Blogging isn’t the best bet if you are trying to make some cash. I’m not here to inspire people either. If what I’m doing inspires others that’s awesome and I hope it leads them to what they are looking for. However, I am just on a journey, wandering around the world looking for nothing in particular except for the odd soccer match. I don’t fit in at all in my home town in Adelaide and even in Australia or America it just doesn’t feel right. So I travel.

Year one of blogging was all about learning the art of blogging, adapting to solo travel and experiencing the backpacker culture in Asia. 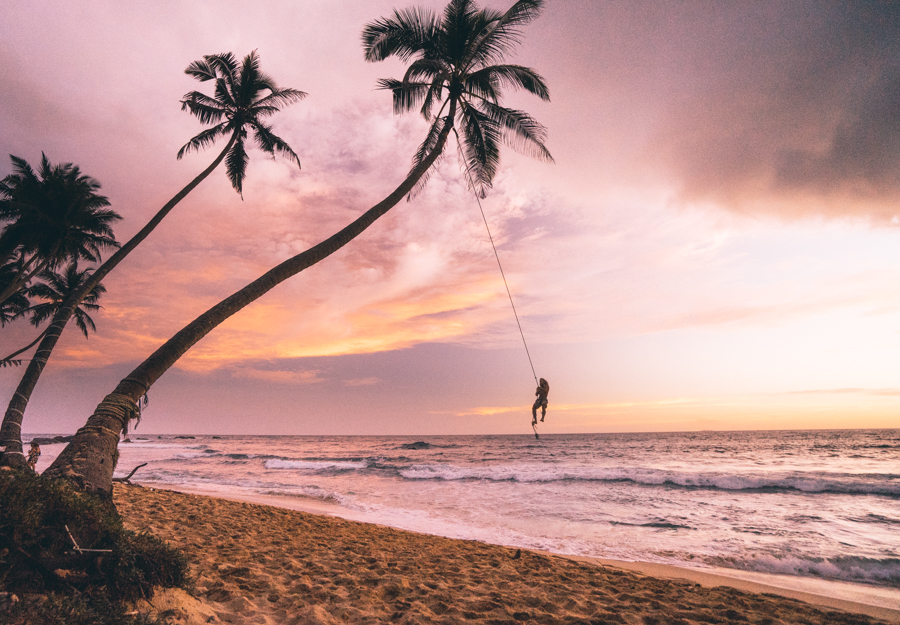 In year two of blogging I am looking to continue traveling, of course, living out of only my backpack. However, I want to explore new directions such as humanitarian efforts, charity, and crowdfunding for projects.

If you also want to attempt to become a travel blogger or you just want to document your adventures as a hobby, I wrote an article you might like to read: HOW TO BECOME A TRAVEL BLOGGER

Hey, you have an awesome blog which I’ve just come across. Do you enjoy traveling alone? Was it hard traveling as a couple? Any advice that you may have?

Interesting story and a good read. Its not so easy but its nice to see how you did it

" I once had a bartender tell me to enjoy my life after he watched me sit on the computer all day. I smiled and thanked him for his concern." - happened a couple of time to me too :P