650 stairs lead you through a narrow crack up the steep slope of the impressive La Piedra Del Penol, or ‘The Big Guatape Rock’. At the top of the Guatape rock, the view is quite simply breathtaking and has to be one of the most amazing lookouts in all of Colombia. At 2,135 meters above sea level, this rock is a natural wonder and the perfect spot to enjoy panoramic views of Guatape Lake and this beautiful region.

If you are based in Medellin you can check out the top-rated Medellin to Guatape day trip, which includes hiking up the 650 stairs of La Piedra Del Penol as well as hotel pick-up and drop-off. 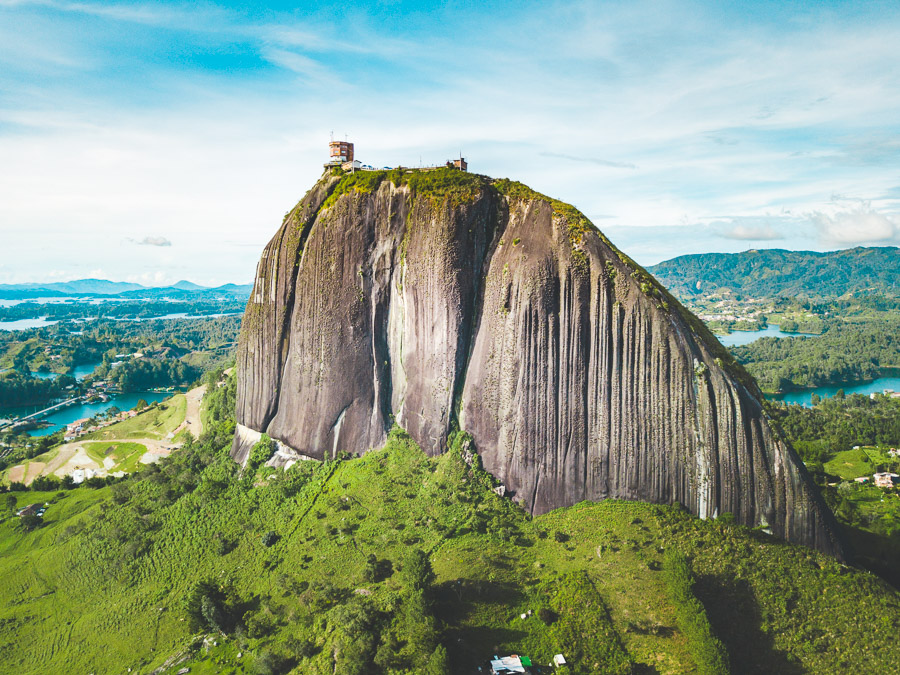 When I first decided to come to Colombia I was looking at all of the cool spots throughout the country. I stumbled upon a landscape picture of La Piedra Del Penol, also known as ‘The Guatape Rock’. I was blown away. I had never seen it in my life and actually never seen anything like it. It reminded me a little bit of Sigiriya Rock in Sri Lanka with the staircase up against the side.

I made sure to make the Guatape region part of my travel plans and ended up organizing a few days in Guatape from Medellin. We ended up staying for several nights in Guatape, which I highly recommend as it is a great region. However, it is possible to make the day trip from Medellin to Guatape to hike up to the top of La Piedra Del Penol ‘The Guatape Rock’ and return to Medellin and back to your hotel on the same day. The top-rated tour for the day trip is Medellin to Guatape Day Trip to climb La Piedra Del Penol.

We stayed at the Lake View Hostel, which was perched beautifully on Guatape Lake.  This meant we needed a tricycle to take us back into El Penol. This cost $3. The driver took us all the way to the entrance gates, where the imposing Guatape Rock towered over us.

The entrance fee for climbing La Piedra Del Penol is $6 USD, which most tourists happily pay for such an epic natural wonder.

650 stairs criss-cross like a zipper holding the giant crack in the rock together. It is quite a phenomenal set of stairs and is part of the attraction in itself. Although 650 stars may seem like an intimidating number, the stairs are quite small and the journey to the top of La Piedra Del Penol ‘The Guatape Rock’ only took about 10-15 minutes. There were many children and older tourists who made the trek to the top so don’t let the height or the stairs scare you away from this epic viewpoint.

Once we reached the top of the Guatape Rock I leaned on the railing, looked out over the edge, and was immediately blown away. The view was out of this world and has to be in the top views of Colombia without a doubt. Hundreds of small islets were scattered throughout the deep blue water of the lake as far as the eye could see.

On one side we could look down to the city of El Penol and to the other we could see the old-style town of Guatape, where we were staying. We watched kayakers and jetskis cruise through the lake below. It seemed like a scene out of Switzerland, Norway, or Austria rather than what I had expected the scenery to be like in Colombia.

Most people hang out at the top for a couple of hours. They want to recover from the stairs and also take in the epic view for as long as possible. There are lots of chairs, tables, and umbrellas as well as a cafe and a refreshment stand, which make this viewpoint a really good chill-out area to spend a morning or afternoon.

What are my favorite pieces of travel gear?

There are four pieces of gear that I simply never travel without. These are four items that I using right now and this list gets updated every year! Here are my travel essentials.

In the ‘How to get there’ location section below I mention why there is a big, white ‘GU’ painted on the side of the rock. However, there is an even more interesting fact about this region that changes your whole perspective on the landscape. The Guatape Rock is a natural formation. However, the lake is man-made. It is part of a national hydroelectricity project and supplies more than 35% of the electricity for Colombia. It also provides electricity, which is sold to neighboring countries like Venezuela.

The town of El Penol, which you look at from the top of La Piedra Del Penol ‘The Guatape Rock’, is actually a new town. The old El Penol is underwater. The hydroelectricity project took the old town when the lake was created. The old El Penol is now almost completely underwater. Tens of thousands of residents had to be relocated to the new town. There is now a huge cross that sticks out of the water in the lake, which marks the spot where the old town is now submerged underwater.

There is a cool little spot I found directly across from La Piedra Del Penol ‘The Guatape Rock’. It is halfway between Guatape and El Penon. Just after you go under a small footbridge jump out of the tricycle (it is walking distance from both El Penon and Guatape. I walked back to Guatape in 20 minutes from this viewpoint) Walk down the trail, through the bushes and you will get a clear shot and a tiny little river bank to chill on. I went down here by myself one morning and enjoyed the peace and quiet and it was really a nice time to take in the rock and the landscape by myself with no distractions. This is where I flew the drone for most of the drone shots and also took some photos with my telephoto lens.

I just sat on that bank and chilled out for almost two hours, waiting for the sun to come over the Guatape rock in between the clouds. These are the cool travel moments where you take it all in and soak it all up in an insane location.

GETTING FROM MEDELLIN TO GUATAPE

Getting from Medellin to Guatape is incredibly simple. All you need to do is get to the Caribe bus station. To get to the Caribe bus station you can take the Medellin Metro or a taxi. Once you arrive at the bus station you can purchase a ticket for $4 USD, which will take you directly all the way to Guatape or El Penol. From here you can either walk as we did or catch a tricycle to your accommodation. The local bus was comfortable, had some form of air-conditioning, and seemed quite safe. The views from Medellin to Guatape or quite beautiful too so my tip is to grab a window seat.

WHERE IS LA PIEDRA DEL PENOL ‘THE GUATAPE ROCK’?

La Piedra Del Penol is in the town of El Penol, which is a small town next to Guatape. It is a bit of a contentious issue because Guatape claims the rock but it is essentially in El Penol. I don’t know all the dirty details of that dispute but it is pretty intense. Guatape fired shots by attempting to paint ‘GUATAPE’ on the side of the rock. El Penol residents protested and the painters stopped after already planting the ‘GU’ in massive letters on the side of the rock. Those letters can still be seen today.

You can stay in El Penol, however, it is common to stay in Guatape, which has a vibrant old town and lots of adventure activities and hostels. The walls of the buildings in Guatape are so beautiful. Each panel has a 3D painting on it with a scene from a village or a mountain. Each building is a work of art and it makes wandering around the town seem like you are moving through an art gallery.

This is really nice and wonderful, I've never seen such in my life before

It is quite unique!

This brought back fond memories of my trip to Medellin in 2015 as a delegate to a regional convention of Jehovah's Witnesses. We spent our first day in Colombia touring, and this was literally the high point of the day! The view from the top was worth the effort to drag my middle-aged body to the 740th step (according to the picture I got). I didn't get these great shots, too busy catching my breath!

Hi! Do you know if this is a pet friendly location? I’m planning a trip with where I can bring my dog and trying to Make sure more places and sightseeing spots are pet friendly so it’s enjoyable, not a burden! Thanks