With three weeks left in Switzerland, it was time to finally head further east. I made my way to Appenzell District, where I would base myself for an entire week.

A small room in the house of an old lady would be my base for the week. I rented it on Airbnb, which is by far the best option for accommodation in Switzerland. My plan was to do a few hikes in the region but the main goal was to hike to Santis summit and possibly do the entire lap around the Alpstein region. It was unlikely as the dangerous Lisengrat ridge that leads to Rotsteinpass was already covered in snow and deemed too dangerous.

I looked at the weather and planned out the week. Despite it being mid-October, there were four sunny days at the end of the week. I decided to make the loop attempt on the final two days of that four-day block of good weather just to give my plans the best possible chance. It’s just not a hike you could do in bad weather.

I started the week a hike around the three lakes of Alpstein. It takes you to the Seealpsee, up to Meglisalp and then across the snowy climb to Falensee and then finally on to Samitersee. All of the lakes are showing beautiful reflections of the fall colors, which contrast not only against the blue water but against the white snow on the dramatic peaks surrounding the lakes. 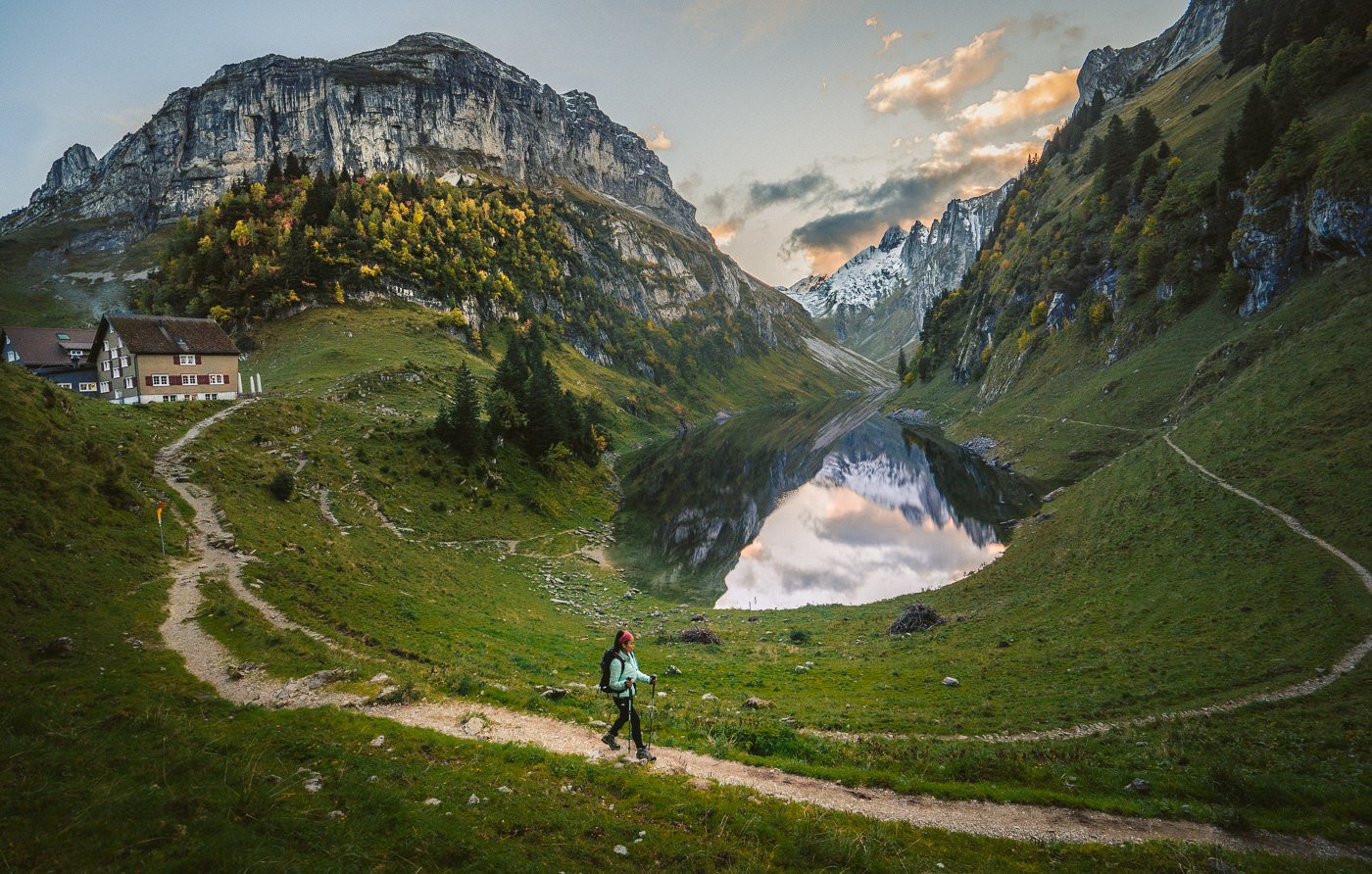 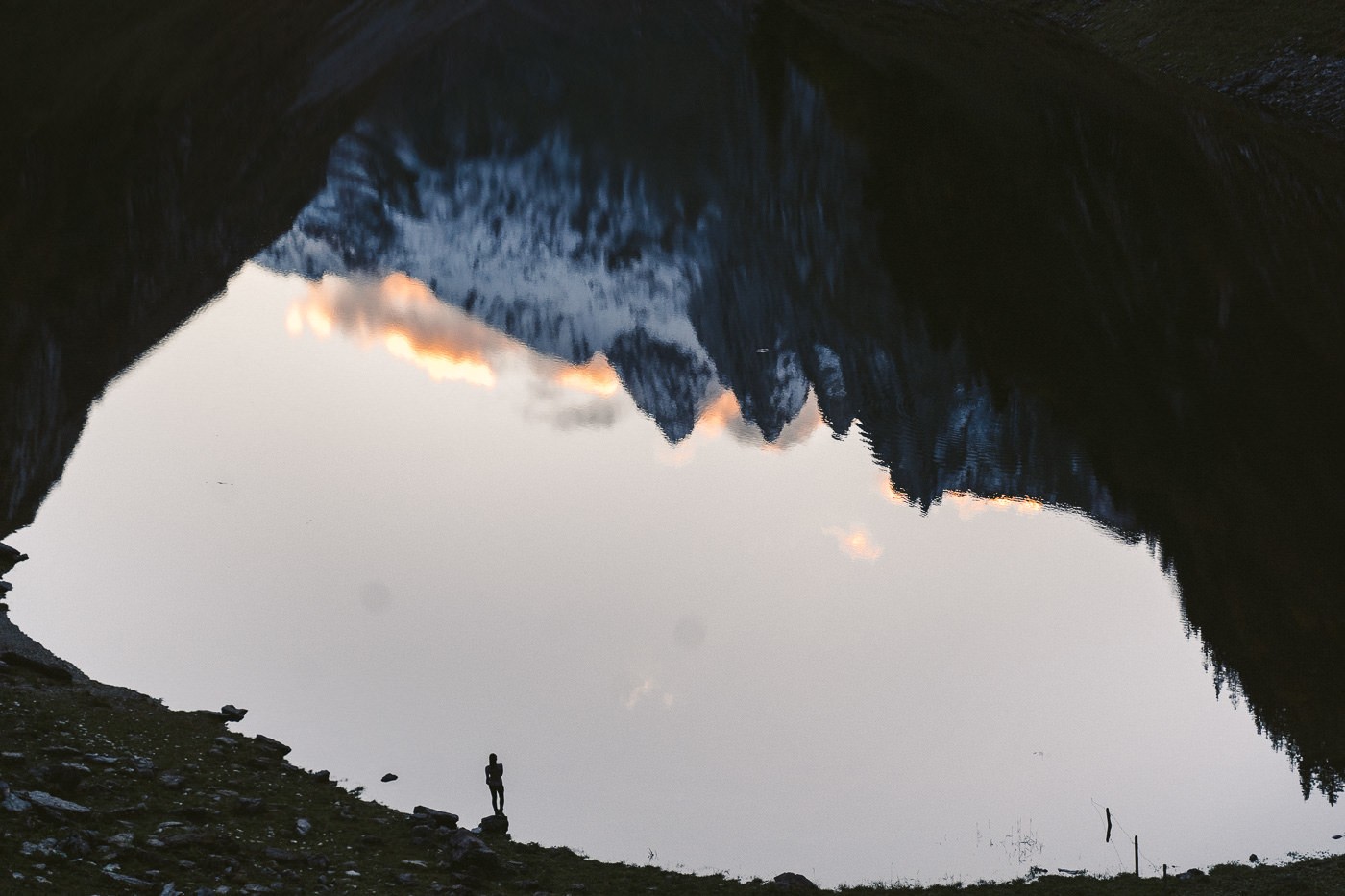 The next hike was from Hoher Kasten to Saxer Lucke, which is a popular ridge on the other side of the Alpstein region from most of the popular spots such as Ebenalp and Ascher. This was a bit more of a chill trail but the ending is epic with the knife-edge ridge in the distance giving a great backdrop for the sunset. 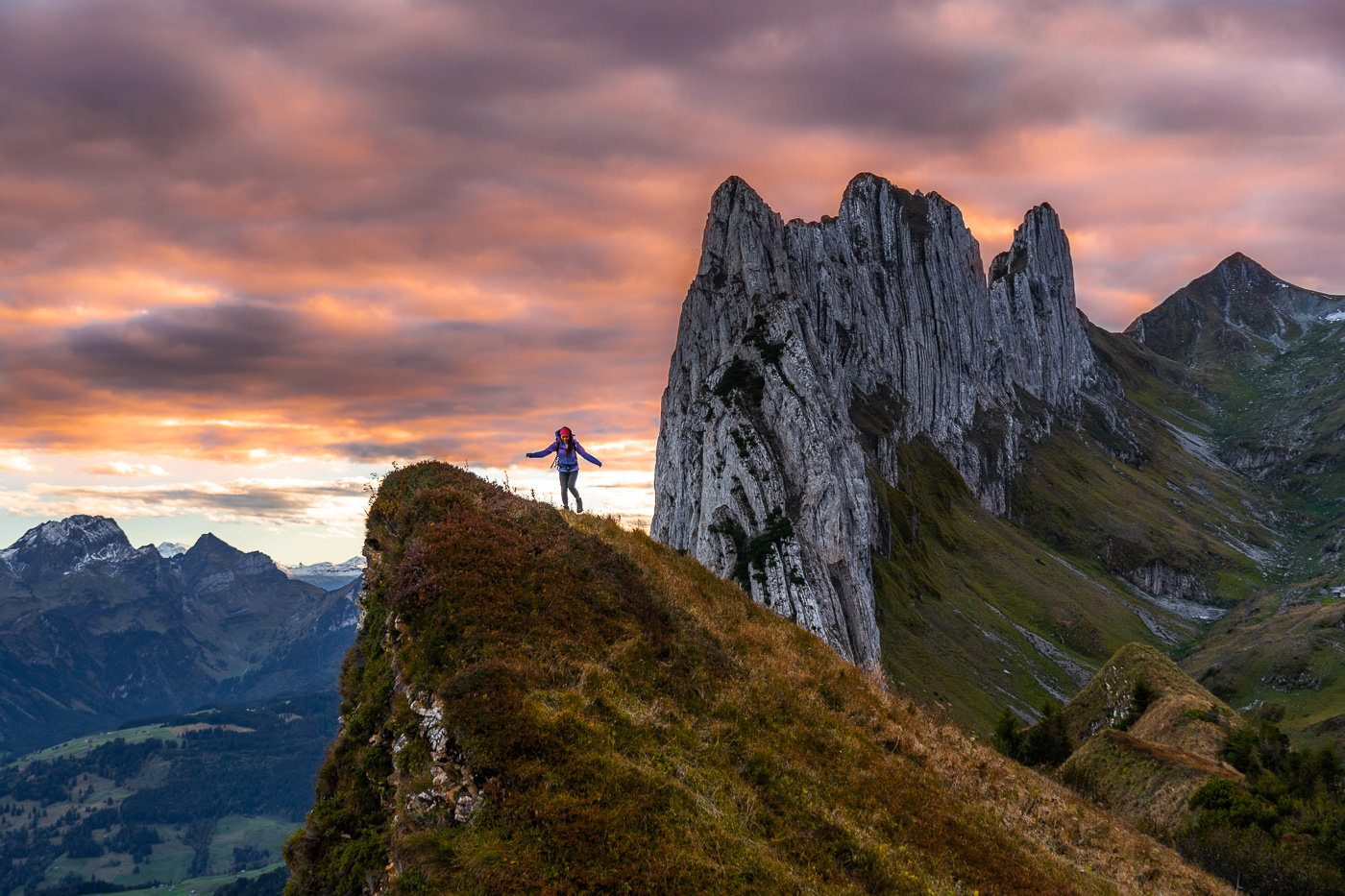 The next hike I did was the Spitzmeilen Peak with an overnight stay at the Spitzmeilen Hut. This one was a bit interesting because the trail was completely covered in snow after the hut and we were creating the first track. We managed to find our way to the base of the Spitzmeilen. Originally, we had thought it would be a bit dangerous to climb given the snow but once we arrived at the base it seemed possible and with the help of chains we managed to climb to the summit, which was one of my favorite moments of recent times in Switzerland. 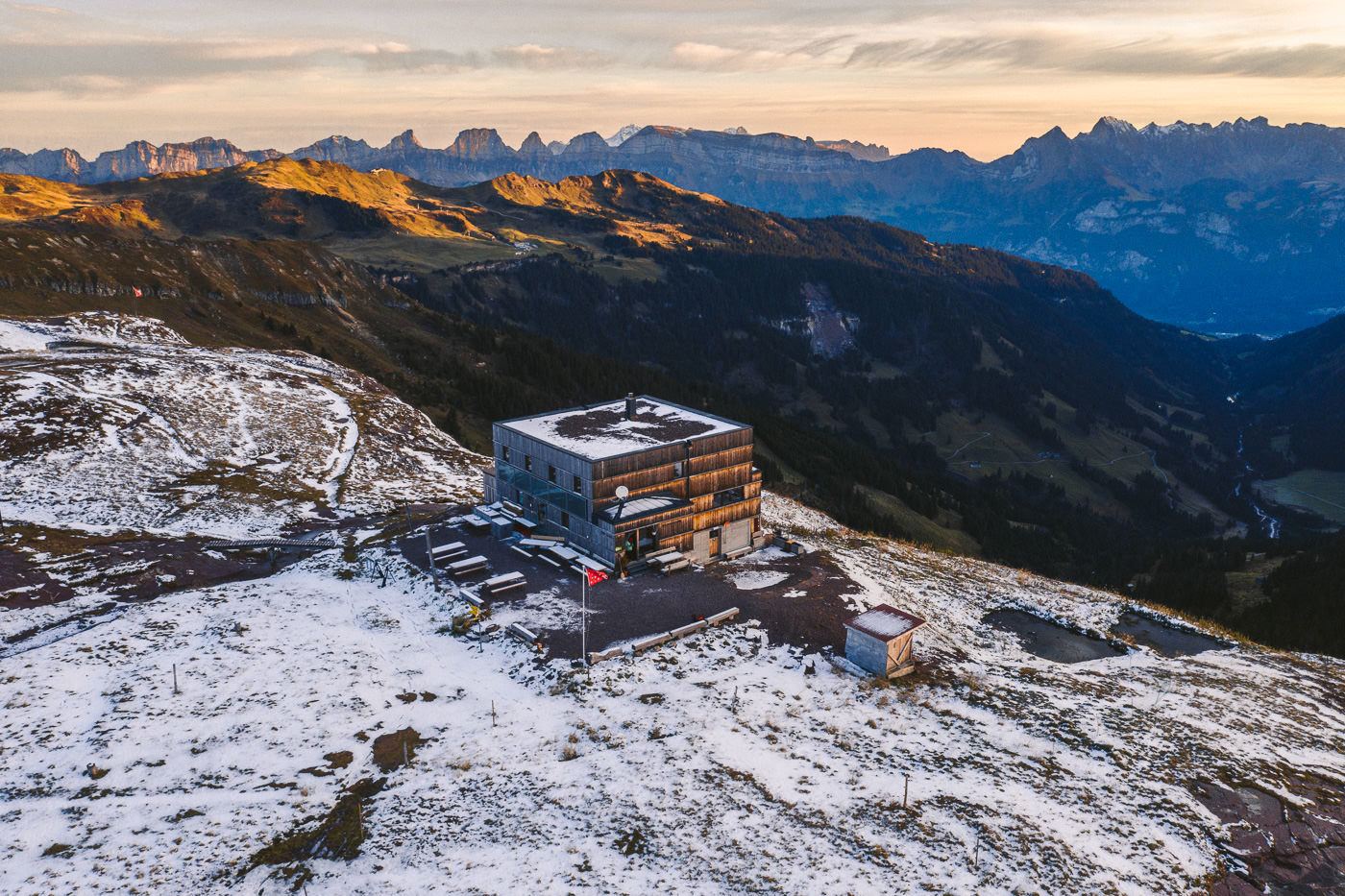 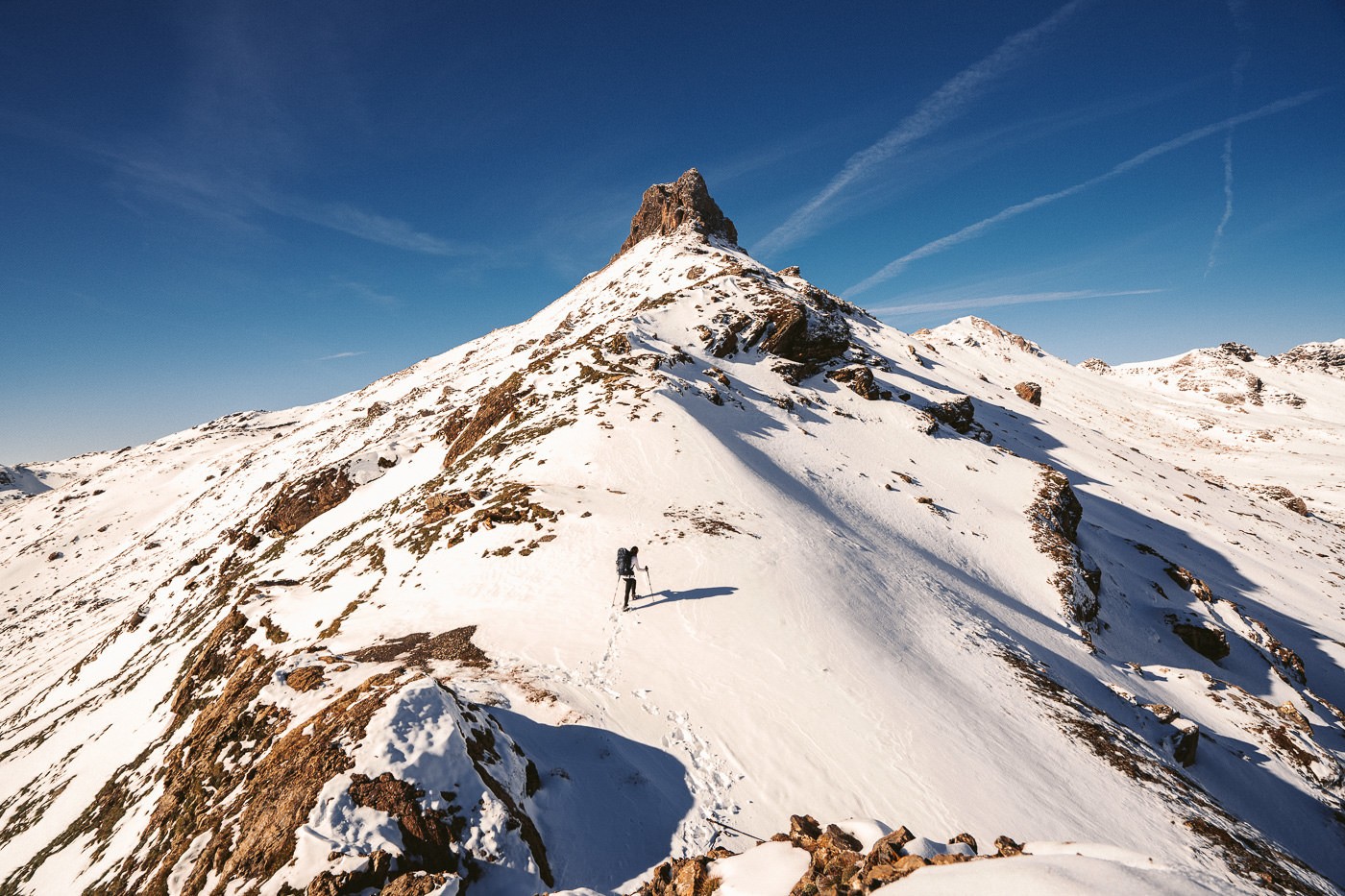 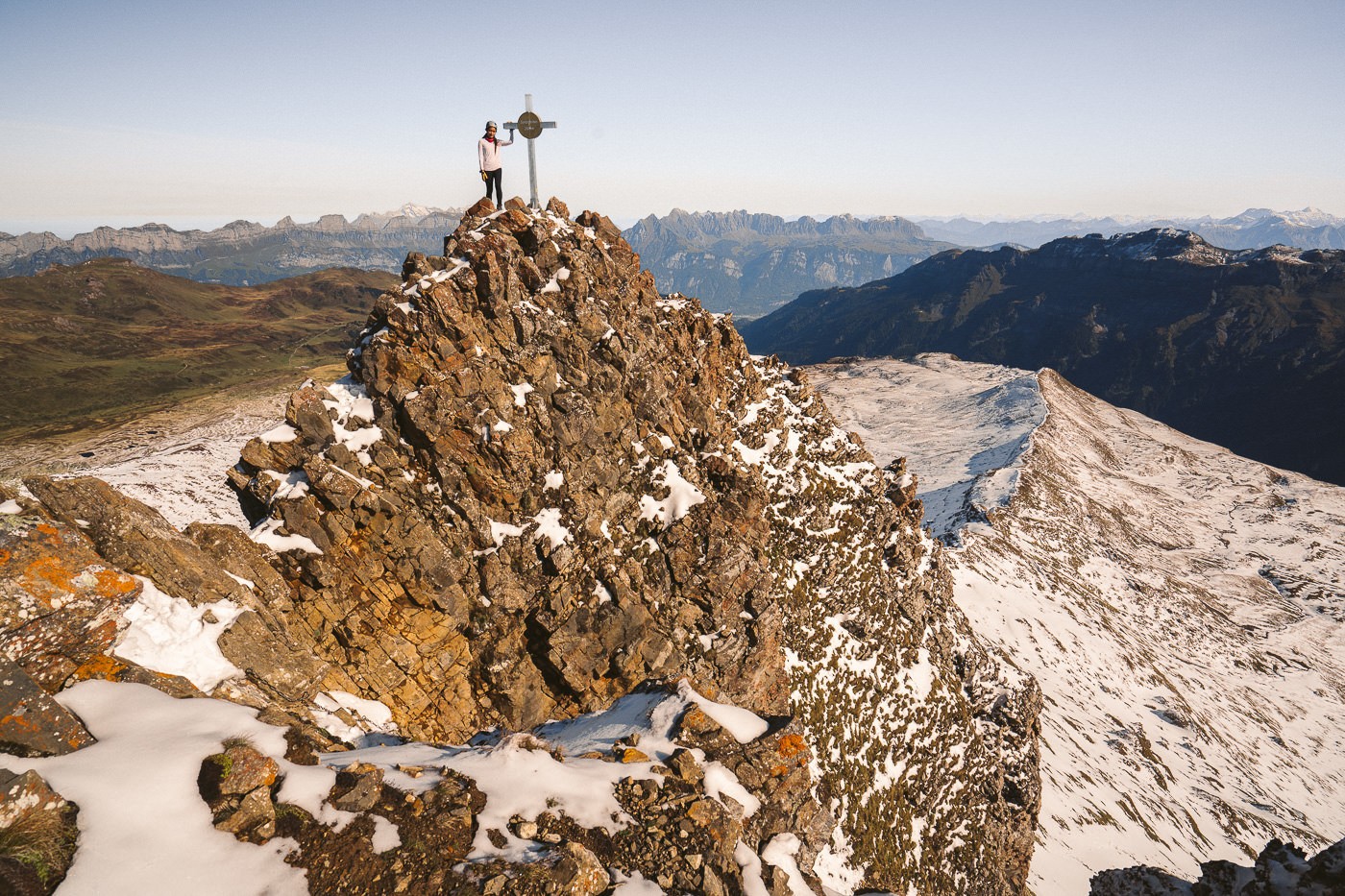 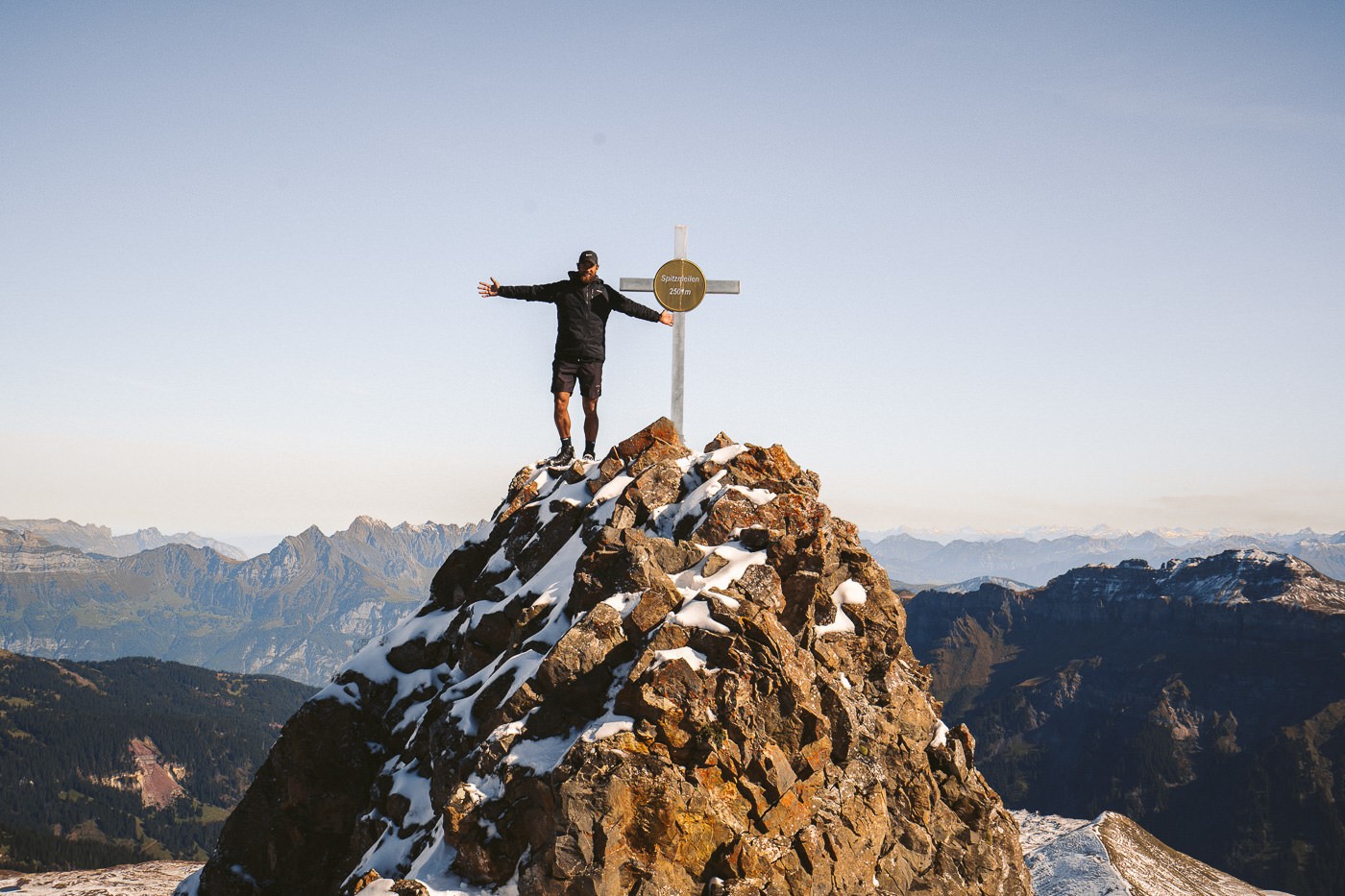 After these three warm-up hikes (actually very warm the Spitzmeilen was a 30km round-trip!), it was finally time to head to Alpstein and give the loop a crack. I was sure I could at least get to Schafler and anything beyond that would be a bonus. I hadn’t been able to get conclusive advice about reaching Santis although it sounded possible but a lot of people had thought Lisengrat would be no good. I went in with few expectations.

I set off first to Ascher and actually felt good in my hips for the first time in a while and with that tiny bit of freedom went pretty hard up the hill, setting the 4th fastest Strava hiking time to Ascher even with all of my overnight gear. Felt good to give it a whirl.

I continued up to Ebenalp, dropped off a couple of pieces of gear in the dormitory and then hiked up to Schafler for the sunset. Schafler hut was booked out so I had to stay 2.5kms down the hill at Ebenalp, which was not a problem. The sunset was epic and I hung out by myself on the ridge till the sun went down only to find someone had taken my trekking poles. Fun times. I hiked back to Ebenalp to spend the night in the dorm. 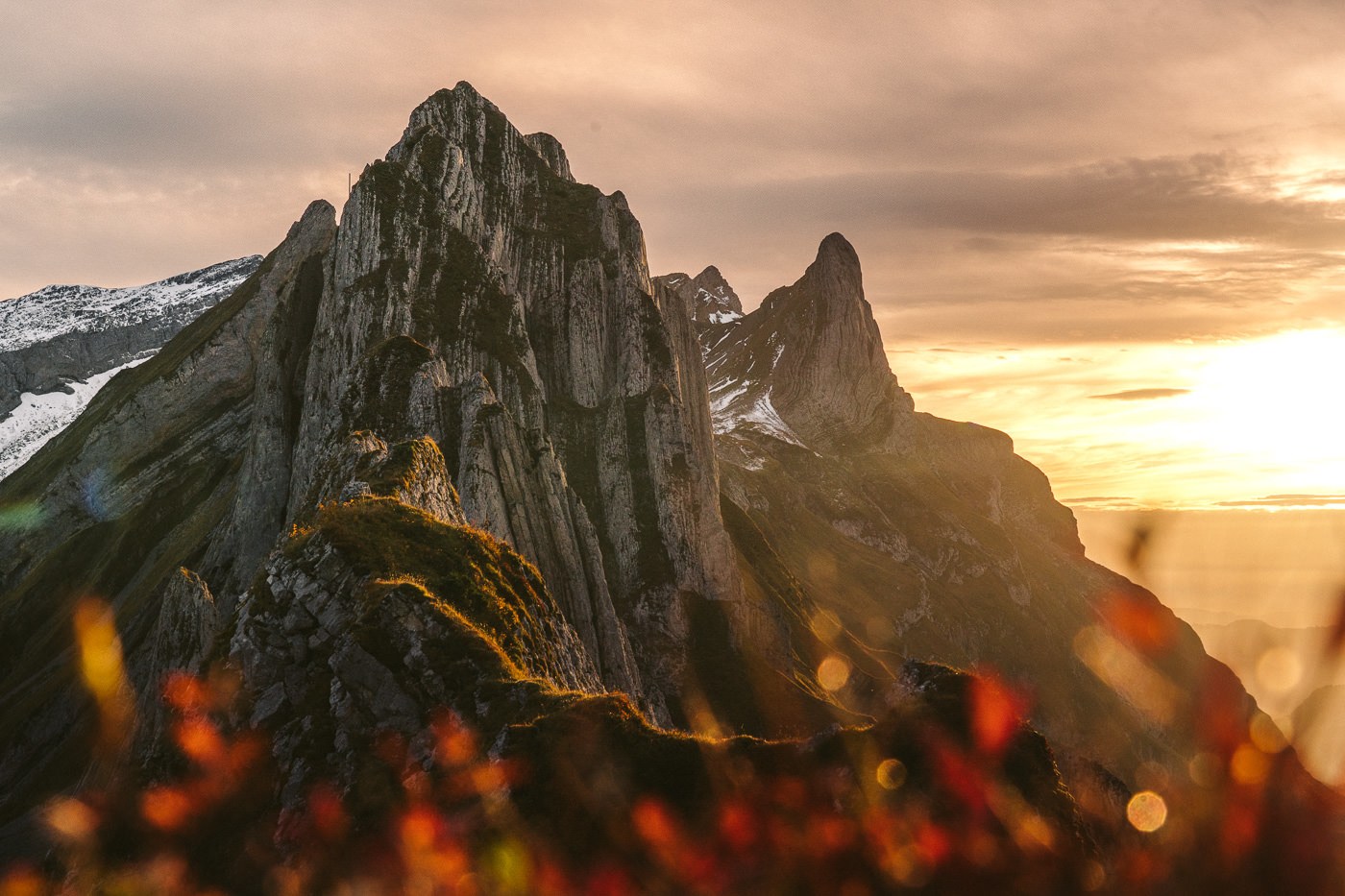 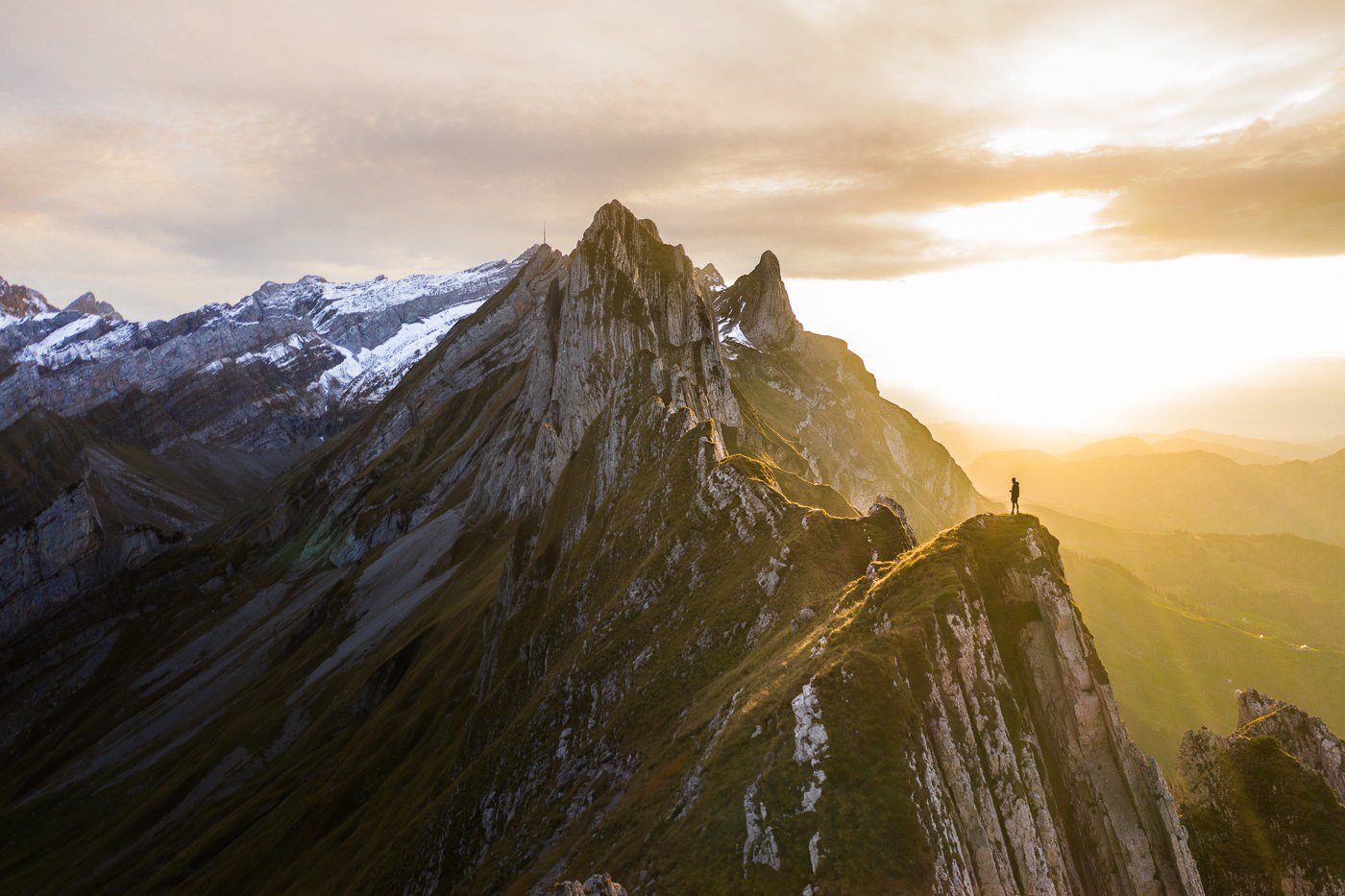 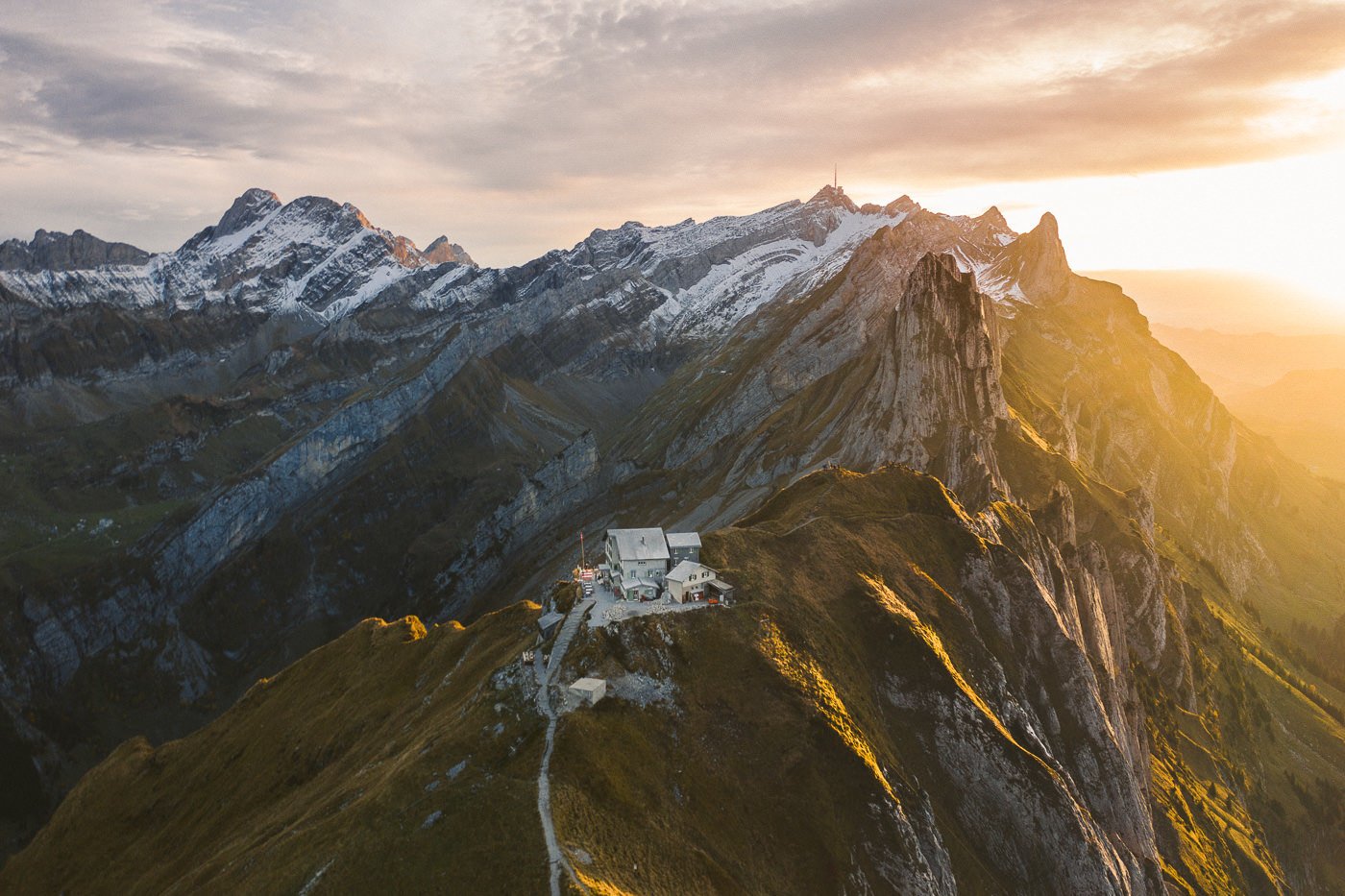 On Sunday, I woke before the sunrise and hiked back up to Schafler (sans poles) for the sunrise at the ridge. I sat, took it in and then continued to Ohrli, which would be the pass between Schafler and Santis. Things were going well despite a little bit of snow creeping into the trail. It was at Ohrli where I encountered the Ibex or Capricorns as can be directly translated. There was a herd with a few Ibex having huge horns and they decided to pose for me directly in front of the ridges I had just passed. It was a brilliant pit stop on the way to Santis. 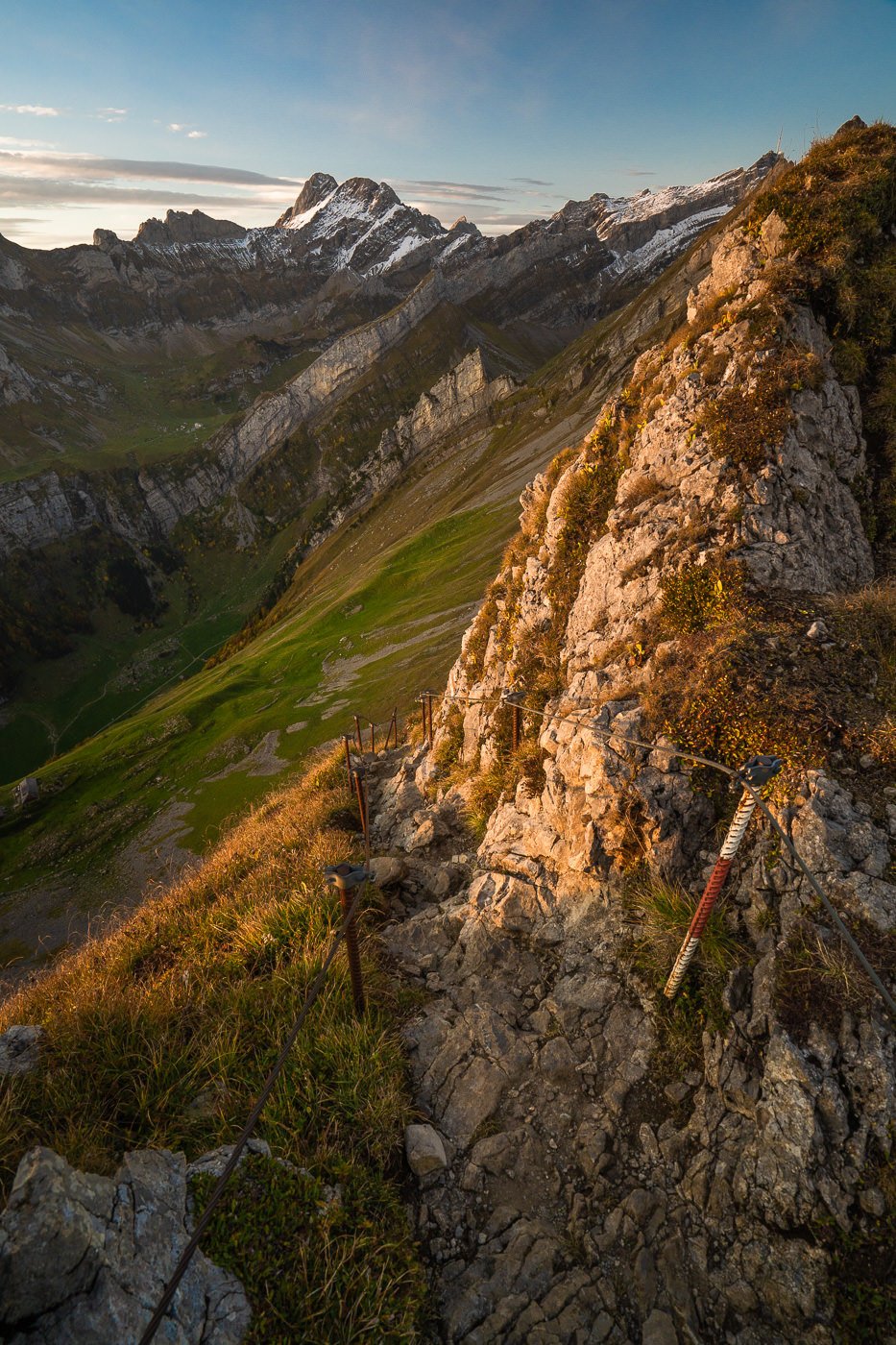 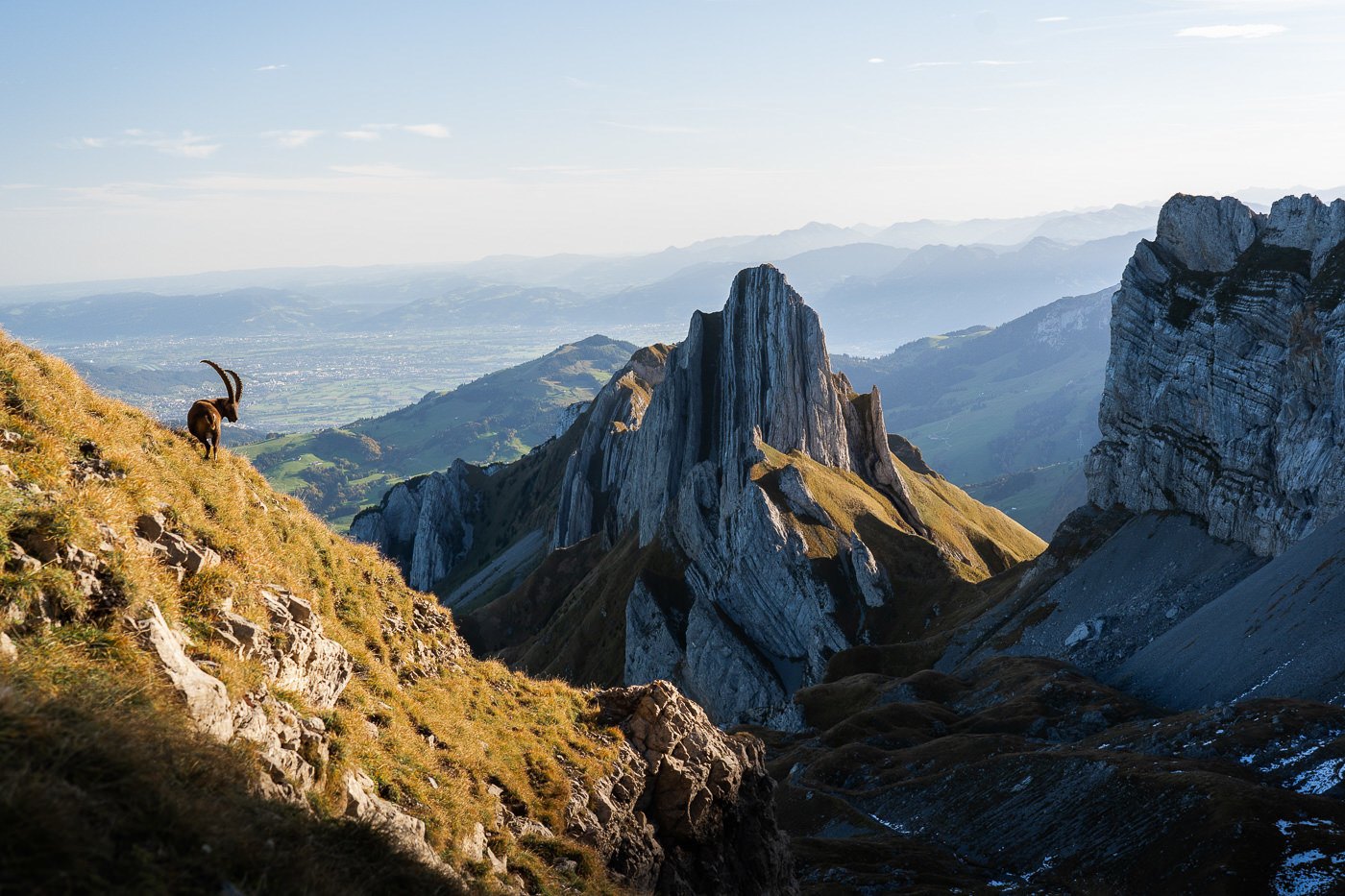 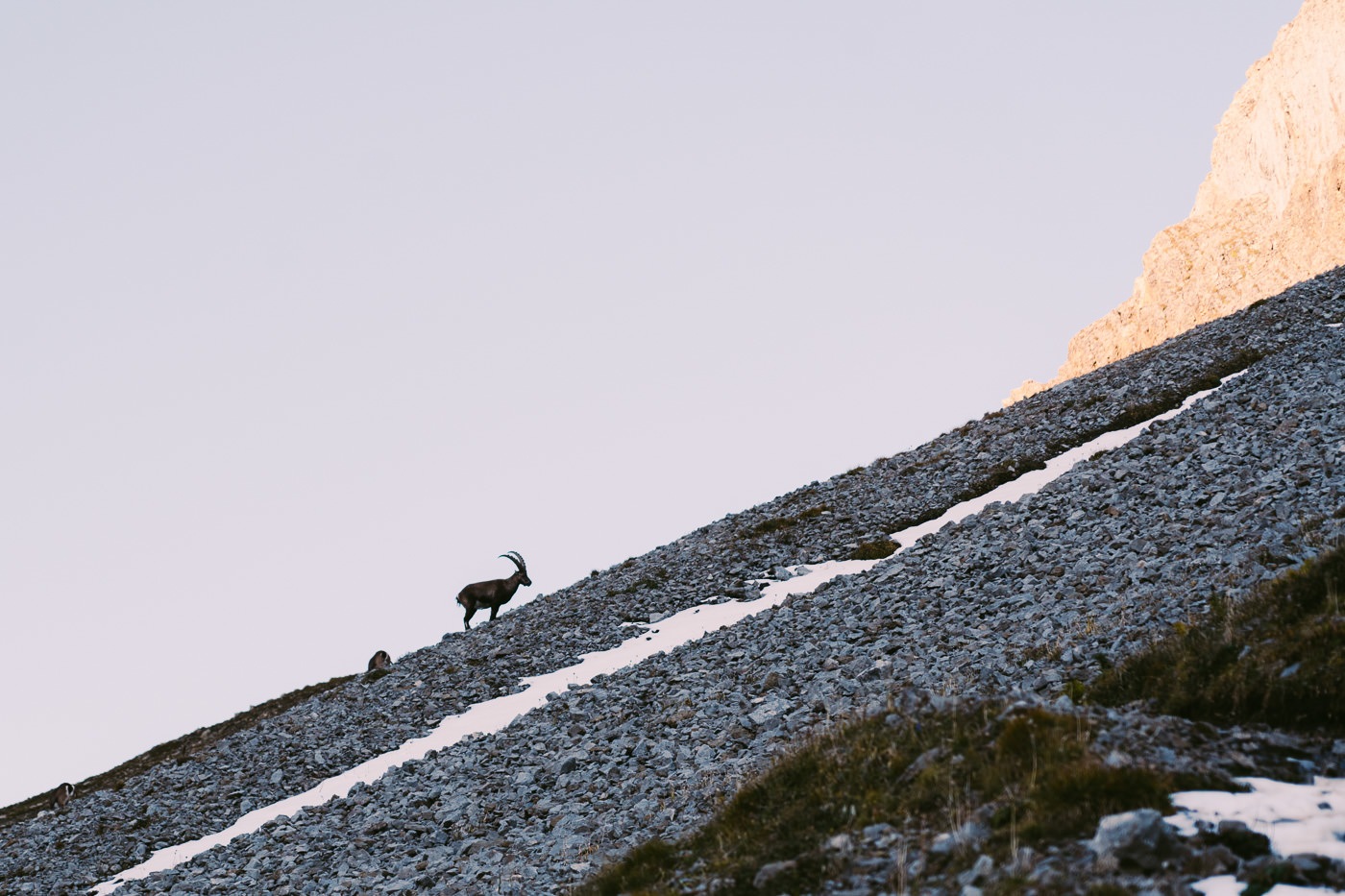 I continued on to Santis, which was covered in quite a bit of snow but with minimal exposure and sufficient chains and poles to help when there was an element of danger. Reaching Santis for a bowl of soup and vegetable rosti at midday was a great part of the day with epic views over the entire region.

I saw a few people very slowly creeping along the Lisengrat to Rotsteinpass and then a few more. I watched them carefully and saw they were regular looking hikers not alpinists with special gear. I decided to give it a crack after lunch. It turned out to be pretty wild.

Chains helped you stay on the narrow ridge most of the way although in some parts the chains disappeared and all that kept you tumbling down hundreds of meters were carefully placed steps and some crumbly rock to hold onto. It was definitely one of the more dangerous ridges, I’ve attempted. There was a section where I thought I was genuinely in a rough situation but it’s life on the edge that gives you perspective and within reason and within limits whether perceived or not is where we allow ourselves to bloom. This adventure was right on the edge of my limits. 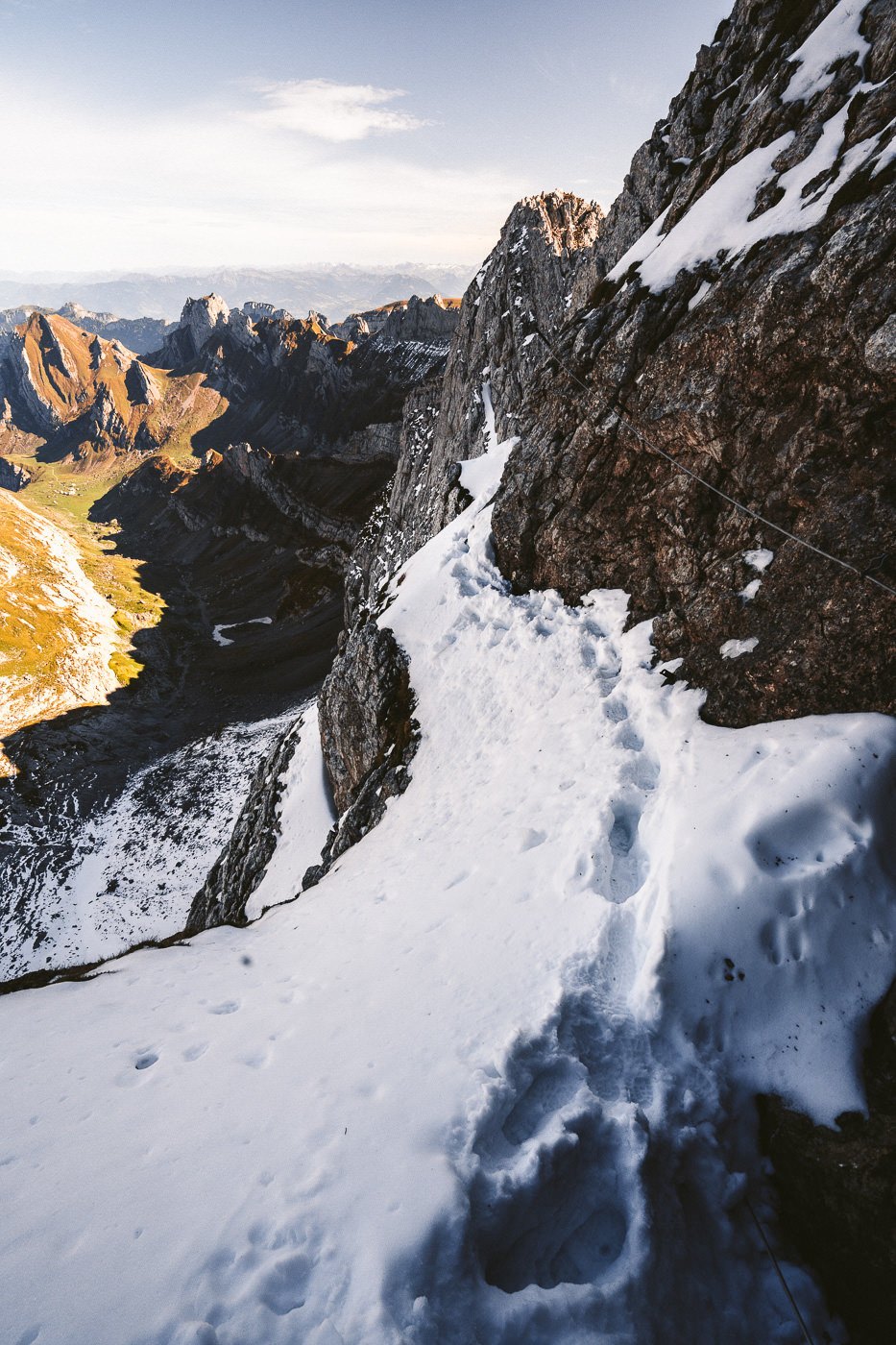 The hike continued on down to Rotsteinpass, where the wardens were advising climbers not to go onto the Lisengrat, a warning not handed out at Santis (although I didn’t ask, I just observed others). I had another lunch here, a plate of cheese pasta. I enjoyed the afternoon sun and took some deep breaths letting the Lisengrat experience sink in. 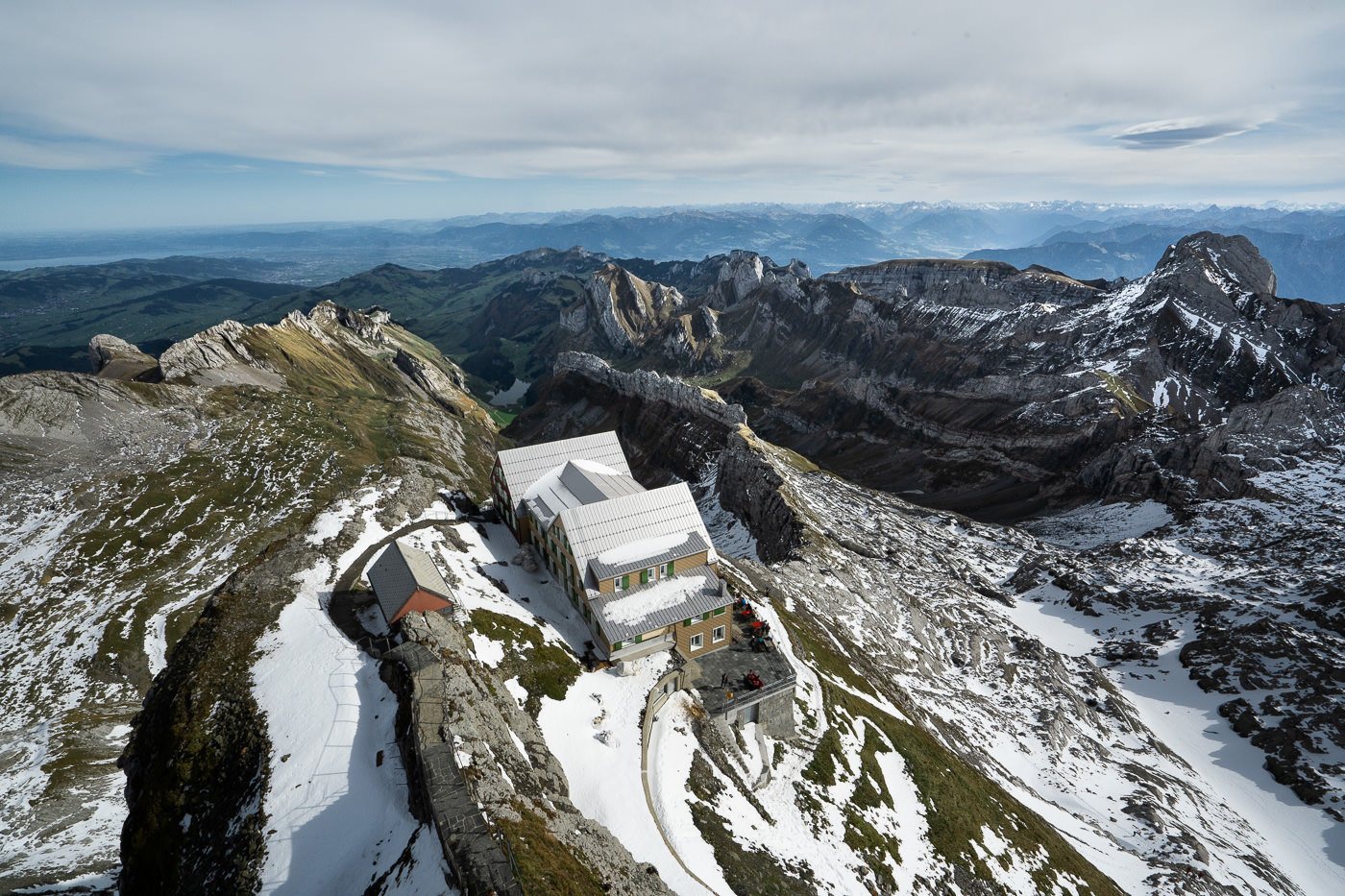 Shortly after, I jogged down through Meglisalp and back down to Wasserauen to complete the might Alpstein Loop of almost 30-kilometers over the two days. An epic adventure I’m so glad I was able to fit in before the winter truly struck! I’ve been so, so fortunate with the weather so far, having rarely been stopped by rain or snow on any hikes. Some careful planning has helped me but you always still need some luck.

So, that was that. Appenzell and Alpstein in the bag and onwards I went. I headed off to Chur, which would be my new base for the next week to explore some lakes, gorges and of course continue climbing, hiking and enjoying my last moments in Switzerland.