The third week of Switzerland adventures has come to a close and to be honest, I’m pretty happy to have made it through the week. Josh and I had a pretty epic adventure that involved one bizarre and potentially deadly moment.

You may have watched the rundown on my Instagram Story but if not, Josh has written out a great recap of our misadventures at Rochers de Naye hike in Geneva, Switzerland. I’ve copied in his story below illustrate what went down. I’ve also added some of the photos from Rochers de Naye throughout the story.

After two days inside recovering and staying warm as the thunderstorms passed, we decided we needed to get back out on the mountains. That morning, precisely at 7:30 am we were woken by an extraordinary clap of thunder. As the forecast had suggested, we were ready for another wet and rainy day. After completing a gym session mid-morning, there looked to be promising in the sky for afternoon sunshine. Without driving too far “Rochers-de-Naye” appeared to be a viable option to hike.

In typical Jackson and Josh fashion, we caught the last cable car up to the top of the mountain. This week we took cable cars to the top of the summits and hiked down. As Jackson is still reasonably fresh off hip surgery, it protects his hip a little more. Running down the mountain is also good practice for sky running, that’s what I’m telling myself anyway.

Upon reaching the top of the mountain, we were greeted by strong and very cold winds plus a lot of cloud cover. As we call it, we were ‘socked in’. We stayed up on the summit for an hour or so, taking in the panoramic views in the brief moments when the clouds gave us glimpses of the scenery below. On a sunny day, it would be rather special from the top of Rochers de Naye. As you can see in these photos, it’s remarkable even with heavy cloud cover. 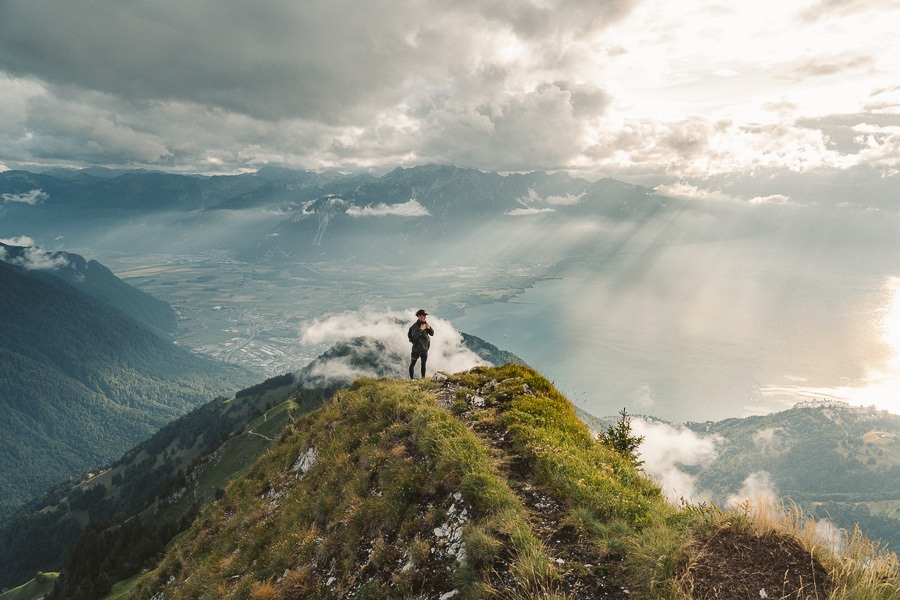 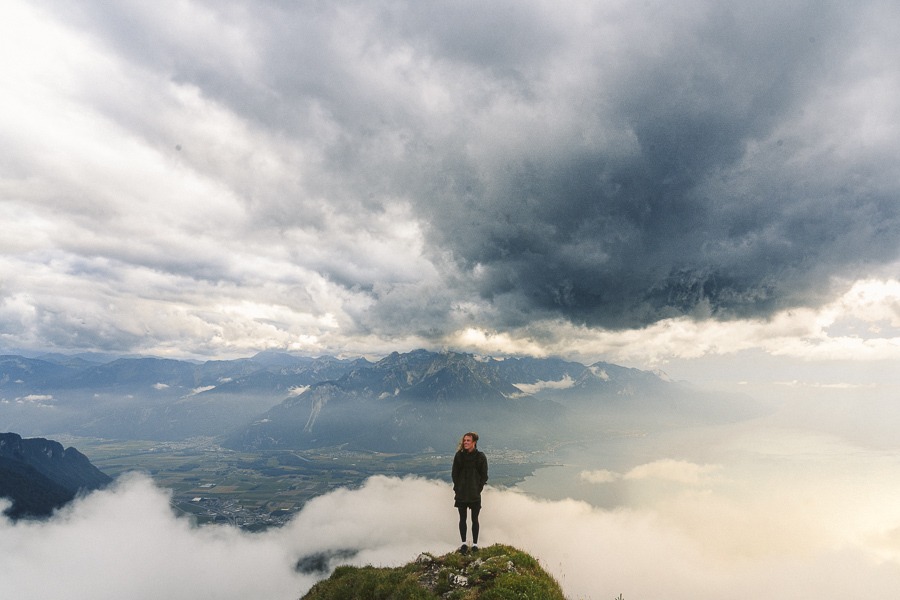 Before long, the clouds became so thick that it was no longer possible to see any more. At this stage of the evening (the night was still young, only 7 pm) we decided to begin our hike down. Trying to find signs wherever possible, we slowly began the decline back towards Montreaux. I genuinely had no idea where we were going. We weren’t able to see where we first started. As long as we were going down, I figured that was good progress. 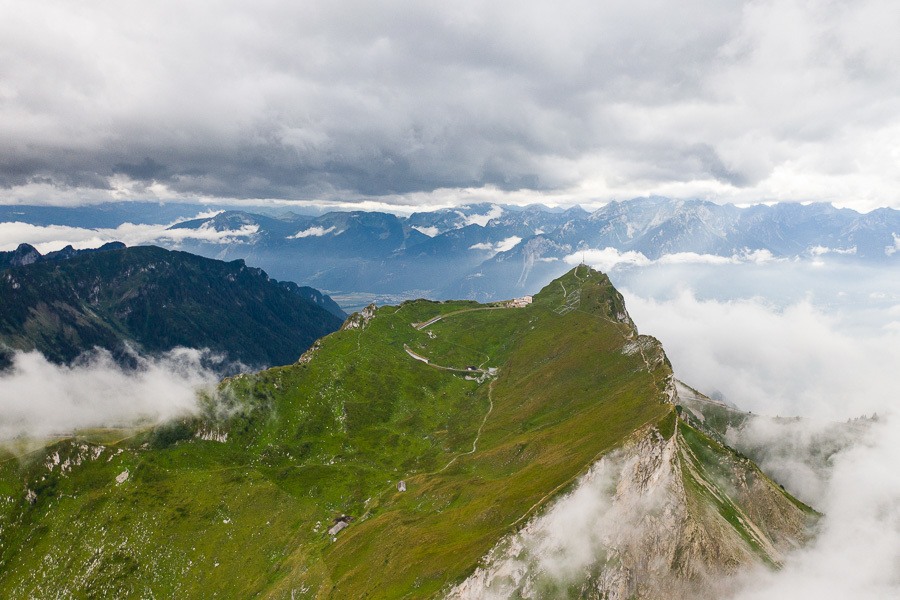 The clouds opened up and we were now engulfed by the heavy rain from above. We laughed to ourselves as we hiked down. “What a place to be at 8 pm on a Wednesday night” I said to Jackson as we still had 1700m of elevation to down-climb. Following the red and white stripe markers, we gradually made our way to a train station. We knew there weren’t any more trains coming for the night so to use the train line as a major point of reference. We knew that if we followed the train line all the way to the bottom, we would eventually find ourselves where we began. 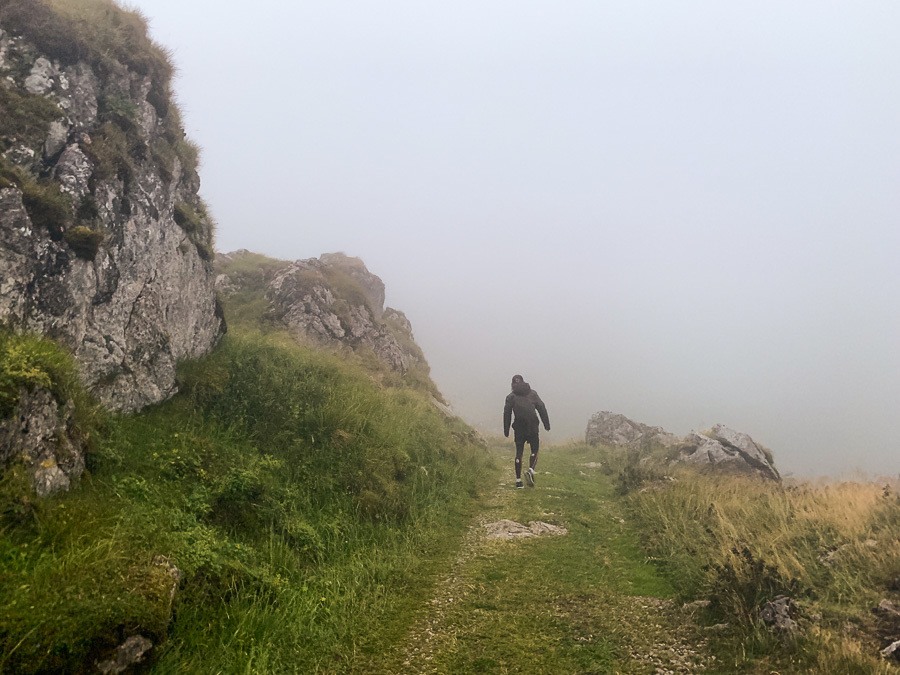 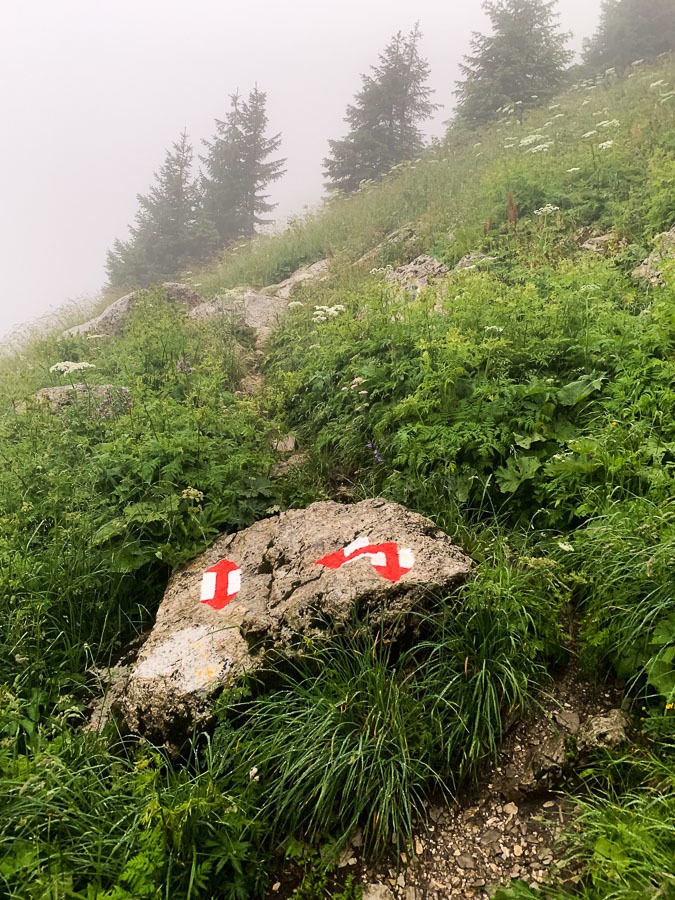 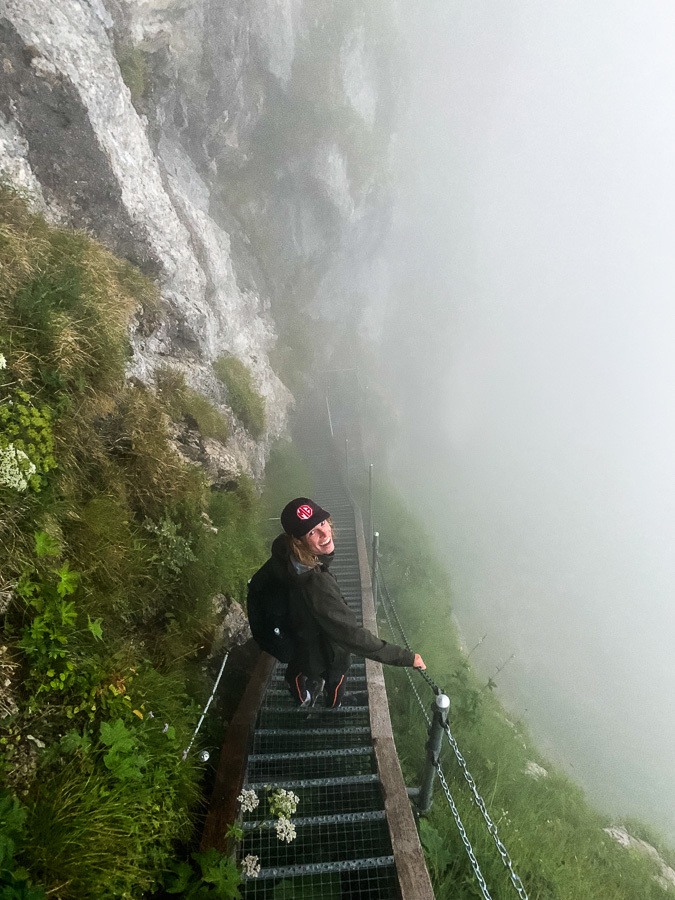 Along the railway we went, doing our best to not injure an ankle. It was a steep-decline, the rain was torrential and the sky was getting dark. To add to the situation, we entered our first tunnel of the night. The tunnel was wide and had enough space on either side, just in case a train was to come. We were told on the way to Rochers-De-Naye, that we were on the final train up and there would no longer be any trains coming up for the night. Alas, we would have to walk down which is what we were doing. Eerily, the tunnel became thinner and darker. Our footsteps fastened and we made our way out the other side promptly.

Tap, crunch, tap, clatter.. the sound of our footsteps as we ran down the railway. Moving through the kilometers, we found ourselves at the main village train station. Nestled under a shelter, were a family of four. Jackson and I ducked in to seek refuge briefly next to the family. In a quick chat, they mentioned that they were waiting for the train to come in 30 minutes time. 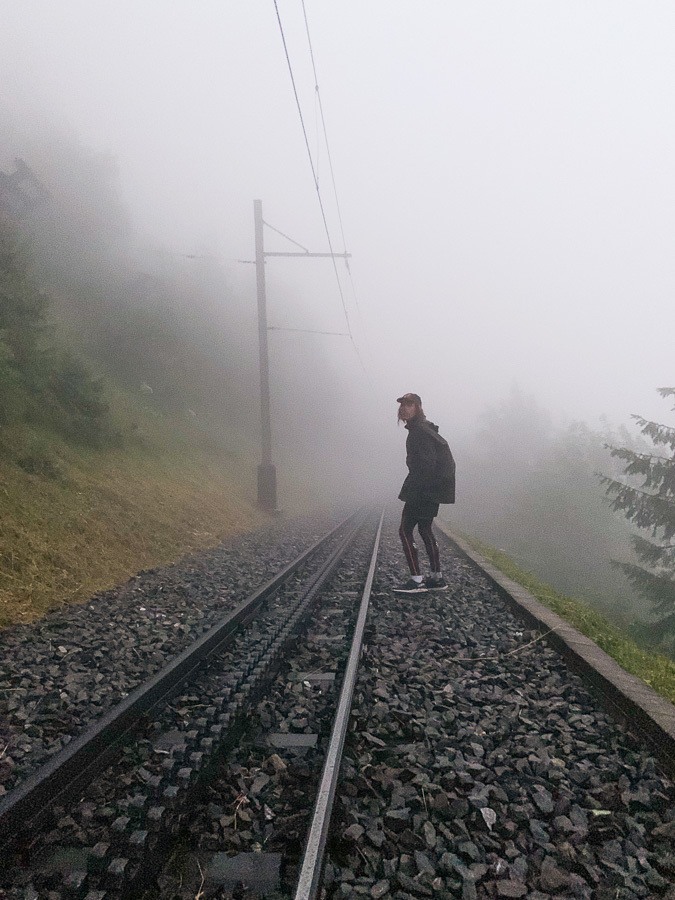 Personally, I didn’t believe them. We were told on the way up that there were no more trains coming on the railway. To the disbelief of the family, Jackson and I stepped back out into the pouring rain and decided to journey on down the railway line. Partly because we were saturated and didn’t want to cool down, and partly because we didn’t believe there was another train coming.

After about 15-20 minutes of running along the railway, we came across another tunnel. This was different from the first tunnel. It was narrow from the very beginning and within 5 meters of entering the tunnel, it was entirely black. There was no way to know whether the tunnel was 50 meters long or 300 meters long. Going up on the train, I couldn’t remember how long each of the tunnels was. We paused for a moment of indecision unsure whether to continue on into the tunnel or to find an alternate route.

Conflicting thoughts were running rampant in our minds. Exploring every possible alternative, we looked on either side of the tunnel and above. There was nowhere else to go. I guess that’s the point of the tunnel.

If we didn’t run into the family at the station, I’m sure we would have continued right through the tunnel. However, we were now second-guessing about what to do. The family at the station appeared to be adamant that there was a training coming in 30 minutes. That was 20 minutes prior, which meant the train had to be on its way very soon. Just like in the movies, we put our fingers to the railway line to see if we could feel any vibrations. Negative, we couldn’t feel anything.

So I ask you, what would you do in this situation?

We decided that we didn’t want to hike back up in the pouring rain and we both had a gut instinct that a train was coming. Our plan was to wait for this elusive train to make it’s way up to the next train station. If these people were telling the truth, then the train could only be a matter of minutes away. If it meant we had to wait three hours on the side of the railway to either wait for the train to pass or to confirm that the trains were done for the night, that’s what we were going to do. Moving off the track, we heard something that sounded like a motorbike on the roads above. The noise we could hear was traveling quickly with the sounds of the engine reverberating from a place we couldn’t pinpoint. Thirty seconds later bright lights shone from the tunnel and sure enough, a train appeared. Jackson and I looked at each other from the bushes, wide-eyed in a state of disbelief. We both knew that we just made a life-saving decision.

It wasn’t over yet. Now that the train had gone up the railway, we still weren’t 100% sure of what we were going to do. Do we quickly run through or is there a chance that another train might come through again?

My second question to you: What would you do now? Go through the tunnel or continue to wait?

Our next plan of attack was to wait for this train to go and collect the people from the village and be ready for it to return. Upon the train returning, we planned to swiftly follow behind to ensure that it was not possible for a train to become the other way and squish us.

We heard the train coming and lept in the bushes. As the train passed with lights that lit up the track like the sun, we didn’t want to be seen. Figuring that if the driver saw us, they would probably call the police. Once the train was 15 seconds into the tunnel, down the hill we ran and into the tunnel. It was a pleasant break we had on the side of the railway, I didn’t miss running on the stones one bit.

We proceeded to run down the railway for another 4km before hitting the roads above Montreaux. We knew were safe and that we would eventually make it back to the car.

What started as an uneventful hiked soon turned into one that we will remember for a long time. Maybe not for the views, but definitely for the decisions we made, the weather we endured and the tedious railway rock running.

Key lessons to take away from this: