Project Lombok came to a close and I needed to take a breather. A breather for me looks like 9-10 blog posts in a week, 55 kilometers of running, gym sessions daily and meetings. Yes, I have trouble relaxing. It’s an issue. Having said that, just having a base for the week is already quite relaxing for me as I am quite used to changing rooms and accommodation a lot, which is the most taxing part of travel.

I stayed this week at an Airbnb in between Berawa and Batu Bolong. It had a gym, pool, breakfast included. This was a great little base for me for the week and it cost $0 as I used my Airbnb credits to pay for it. Winning.

Canggu is always a mixed bag for me. I usually get a lot done but end up having a lot of coffee catch-ups and socializing. This is great and probably necessary but there isn’t as much relaxing and winding down as I always imagine. I know that every time I go to Canggu yet I still haven’t quite figured out how to master the Canggu theme park for how I want to use it. It can be overwhelming, especially when people want to meet up for coffee, lunch, dinner and at times I feel like I’m just cafe hopping all day without really doing too much! I guess it balances out the solo travel times. 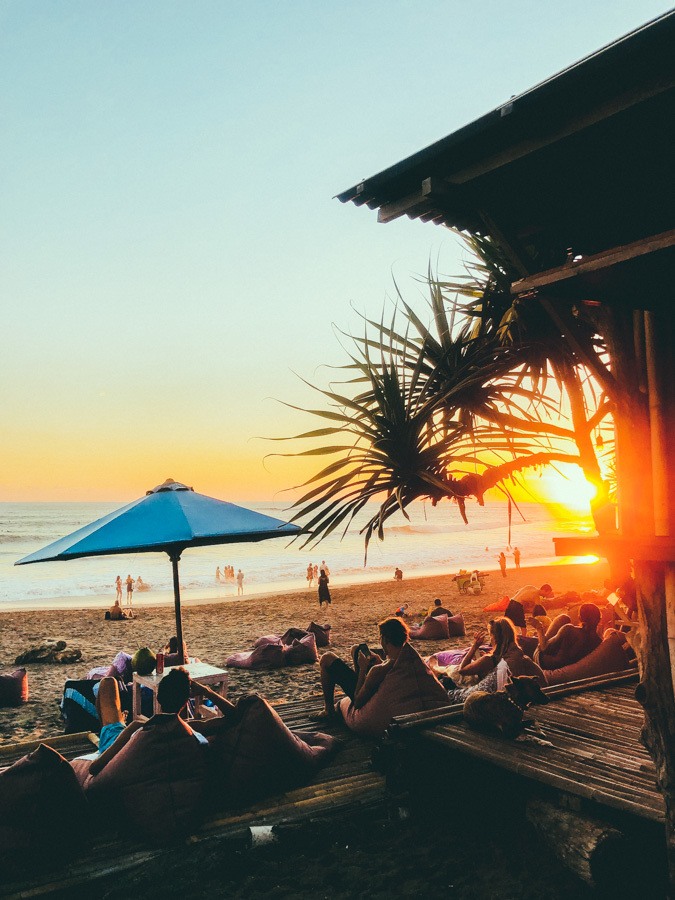 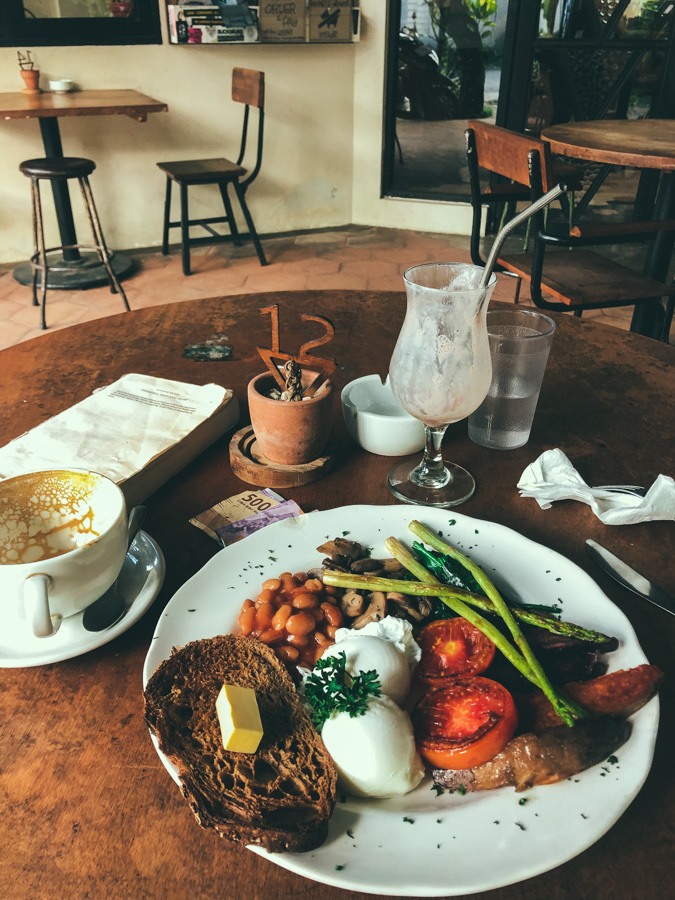 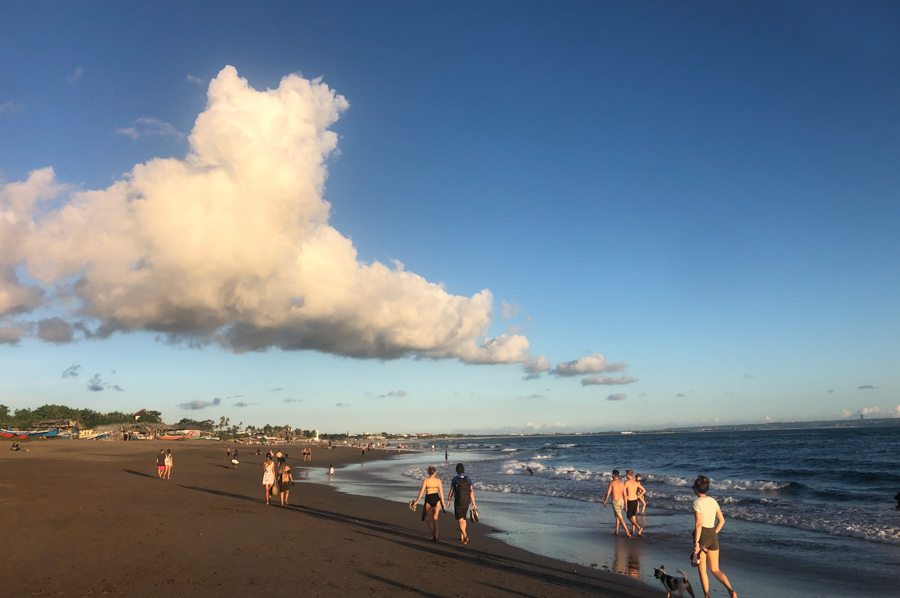 The highlight of the week was the Adventure Bag Cleanup I organized up Mount Batur. I wrote a full blog post about it but I will add the text and photos here so you can check that out as well. I’m currently writing this edition of the weekly from Peru. I just landed and have a week of adventuring here with the tourism board before getting back to Bali.

With the help of Locky from Four Elements Adventures tour company, we put together a little sunrise hike tour up Mount Batur in Bali, Indonesia. I opened up 25 spots for people to join and promoted it on Instagram. Within a day we had filled our crew.

We met at 1:30 am in Canggu with two 13-seater vans ready to go. With a few parties raging in the popular area of Batu Bolong, I didn’t get a second of sleep. Luckily the hike wasn’t more than a couple of hours up so it wouldn’t be too taxing.

We made a stop along the way to pick up the other half of the crew in Ubud and then we all bundled out of the vans at the base of Mt. Batur to begin the trek. With headlamps lit, we set off to reach the summit before sunrise.

The trek up to the summit begins at a slow pace on a flat trail and slowly increases in difficulty as the incline gets steeper and steeper. Our group was full of chat and good vibes and we made it to the summit just as some collar began to appear on the horizon. The beauty of a sunrise at Mt. Batur – and one of the reasons it is so incredibly popular- is that you are above the clouds. This means you get to watch the glow of the clouds as the sun lights them from below before pouring over them towards the end of the sunrise. 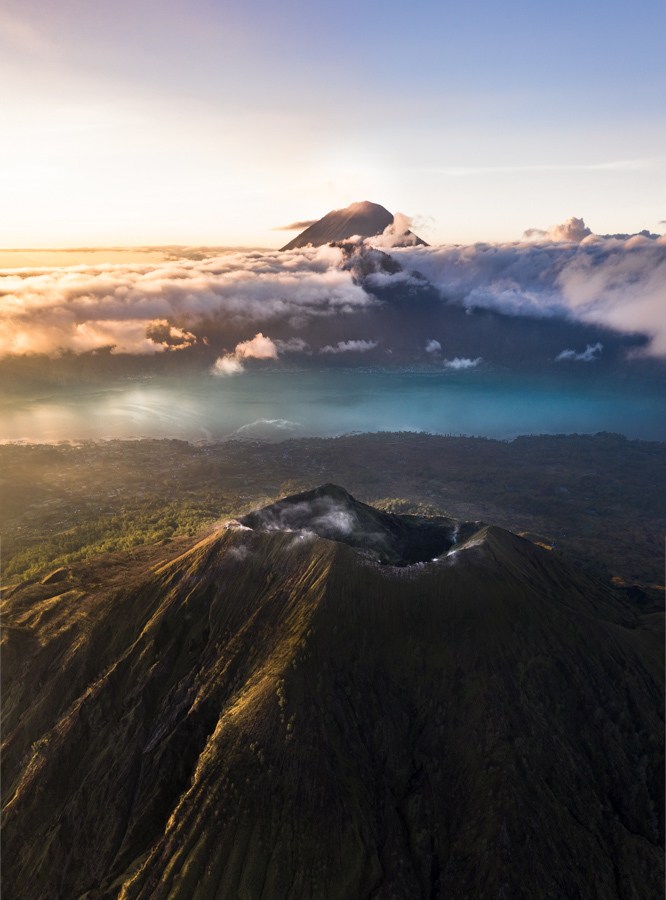 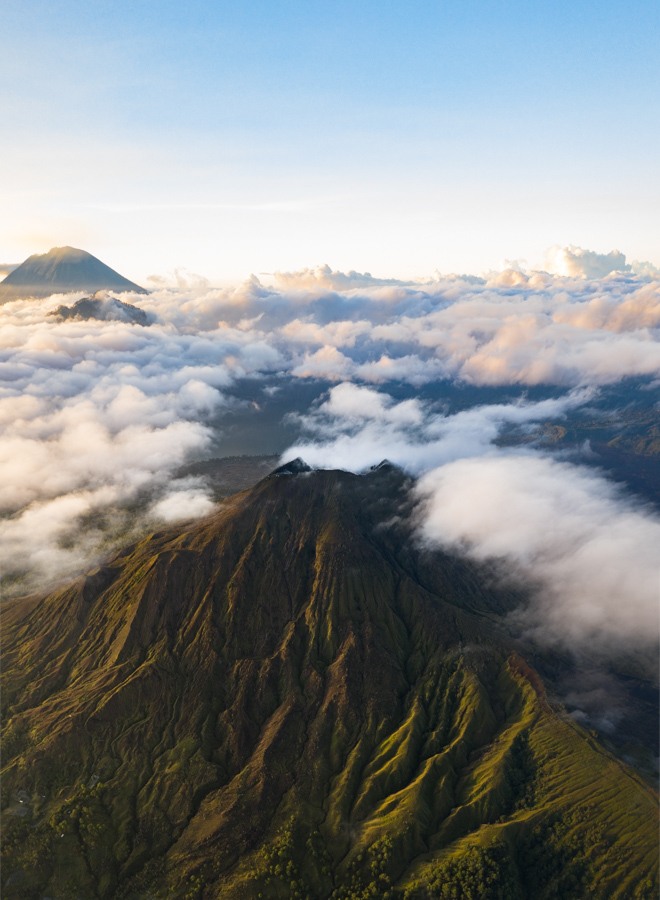 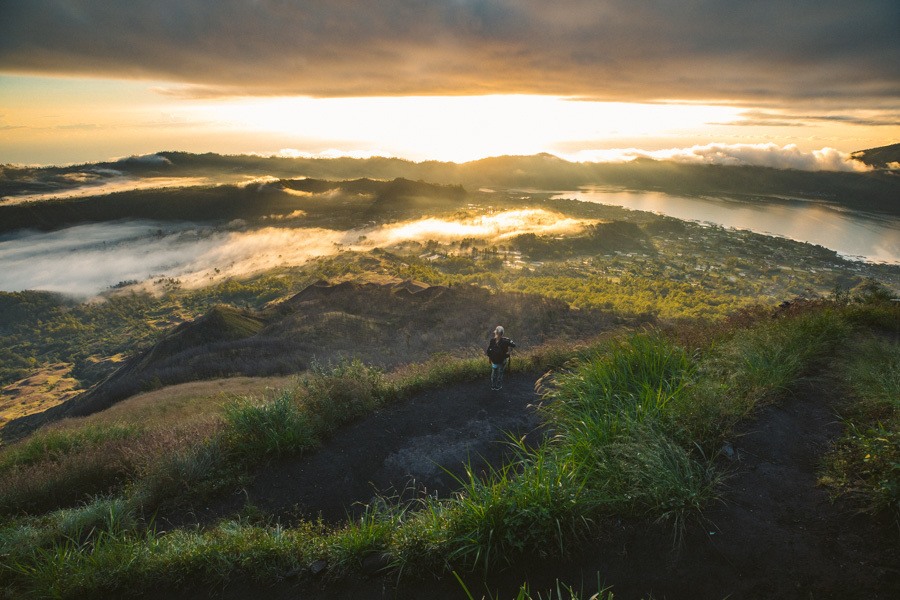 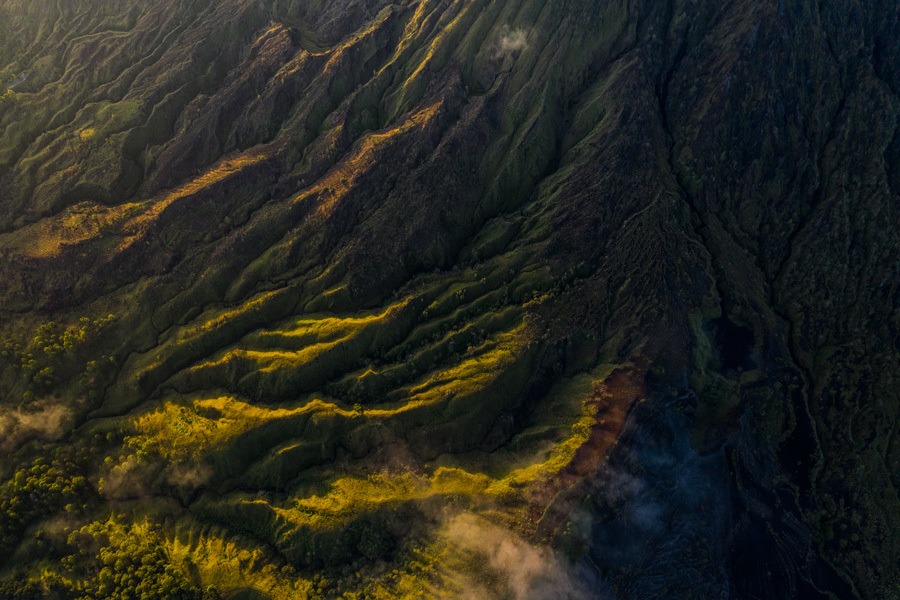 A troupe of monkeys and a handful of hot chocolate kept the group entertained throughout the sunrise, which was truly a spectacle to behold. Once the sun had risen and the colors had been replaced by harsh but golden light, a fog quickly enveloped all those who were enjoying the summit.

We were now inside a cloud and it would stay that way for much of the hike down. It was time to get to work. We handed out the rick sacks that I had purchased at the local market the day before. They were $3 for 25 bags and were an assortment of huge pet food bags and rice sacks. It was good to be re-using materials rather than using brand new, plastic garbage bags. 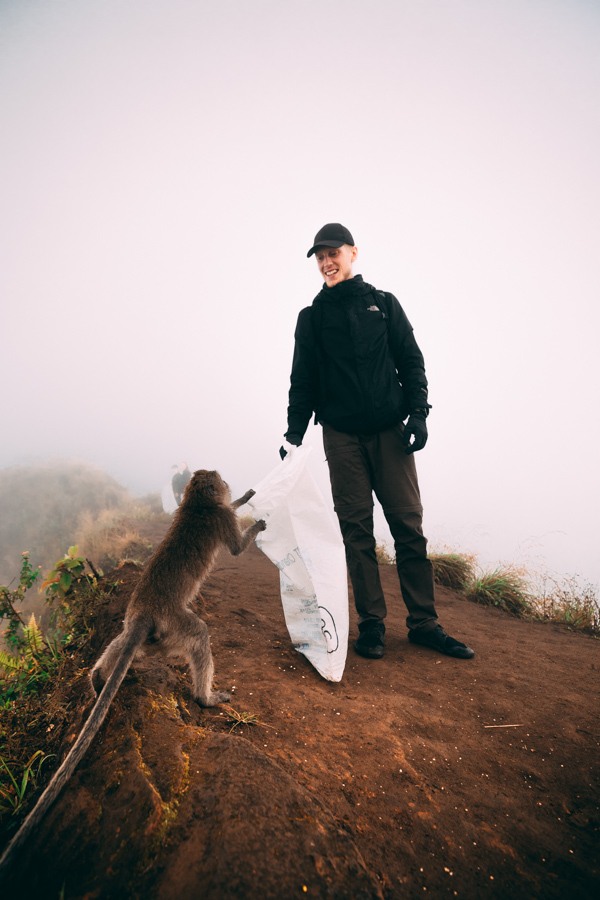 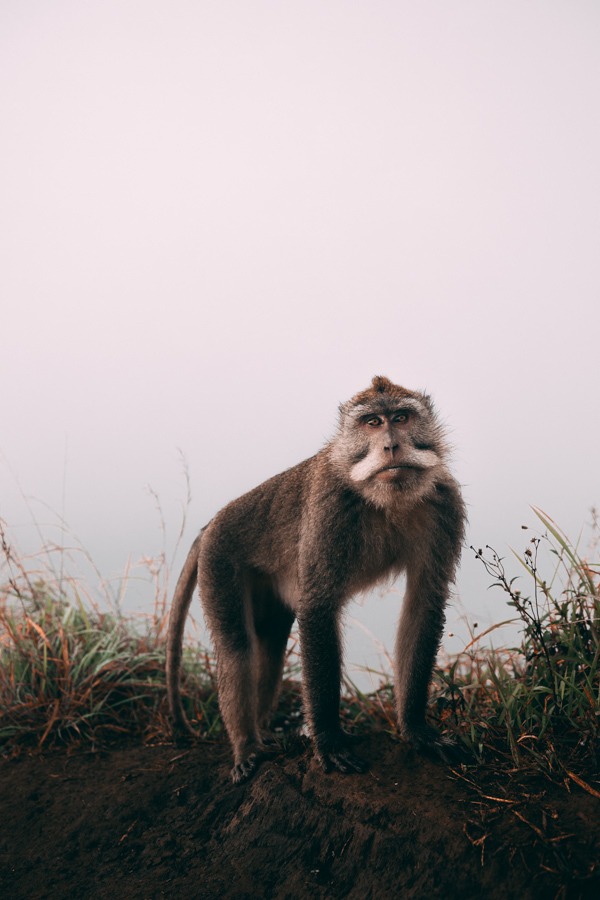 The trash was scattered to the side of the trail as we usually found. Lots of plastic water bottles, candy wrappers, cigarettes, and soft plastics. However, there was a high amount of toilet paper on this trail due to the lack of toilet facilities both at the summit and along the trail.

About halfway down the trail, the clouds disappeared and we had beautiful views over Lake Batur and the ridge-line trail itself. We passed by several more groups of monkeys as we continued to make our way down the hike. 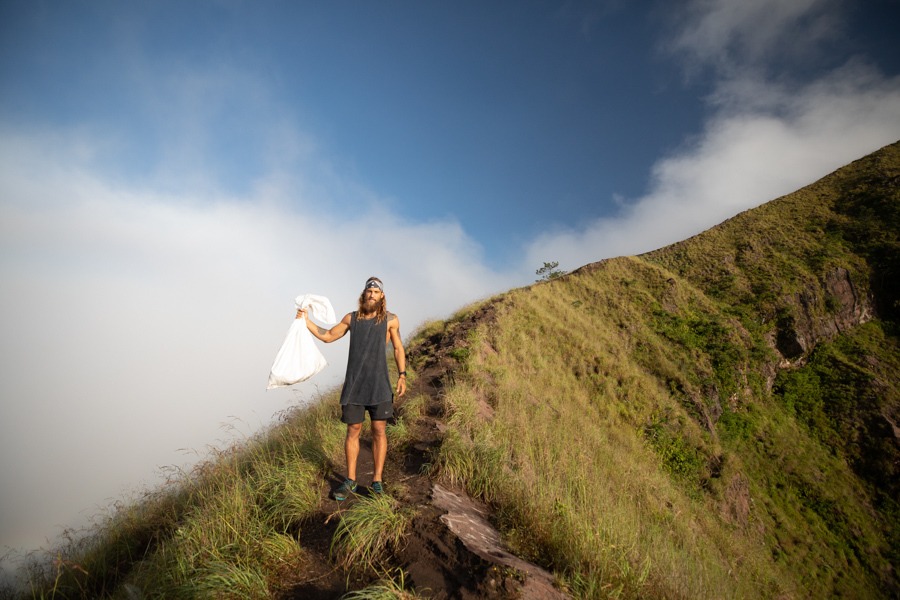 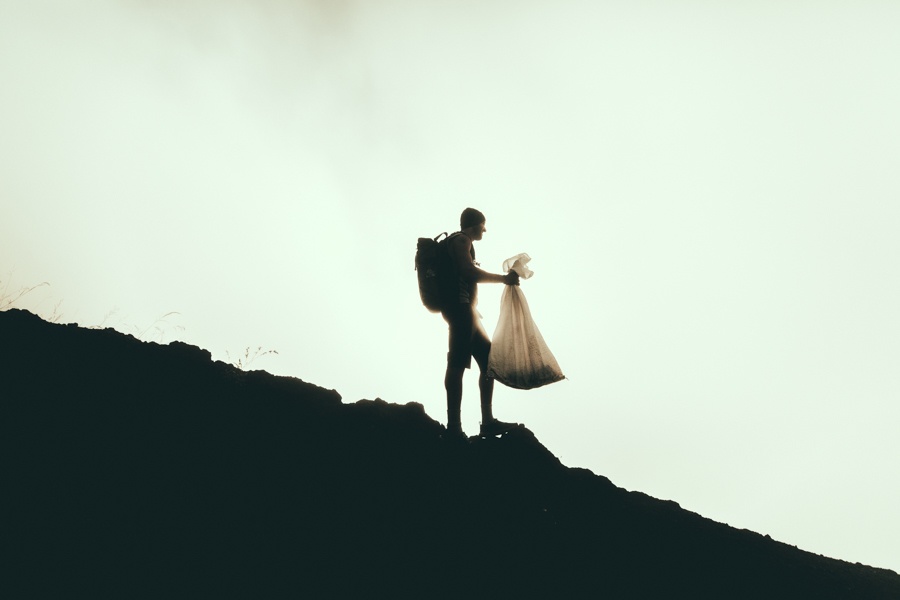 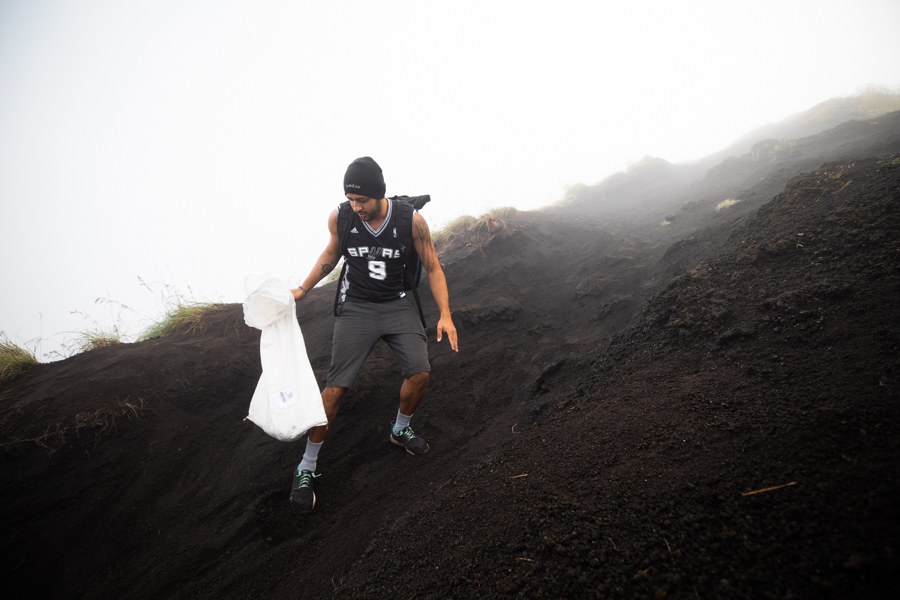 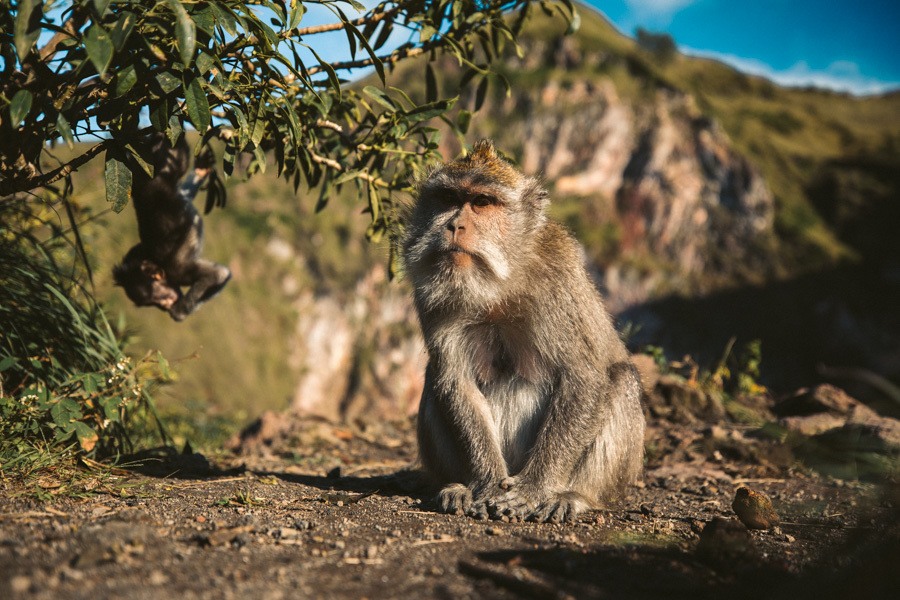 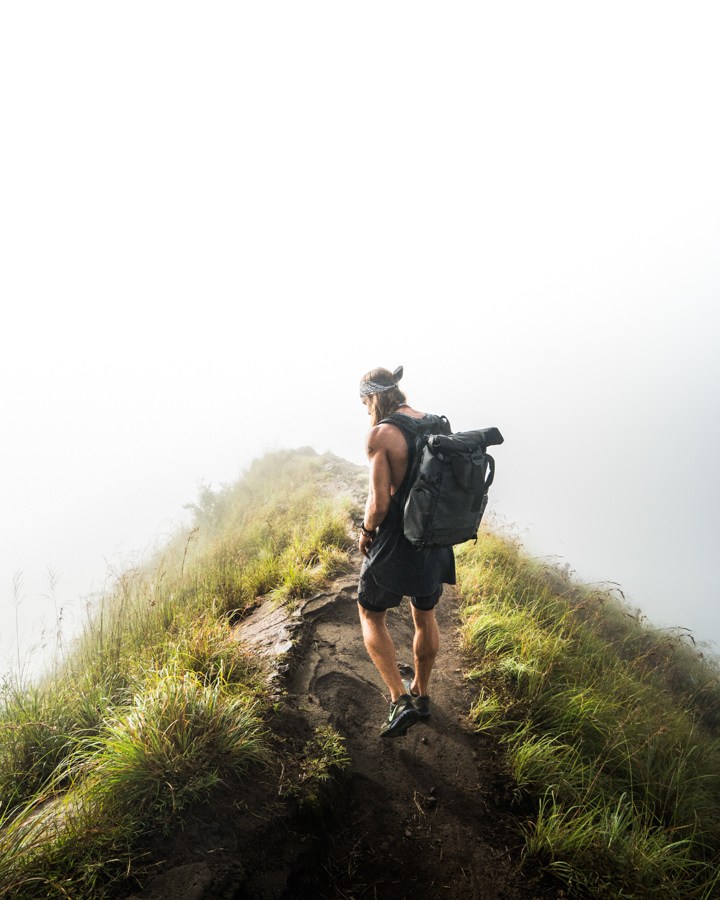 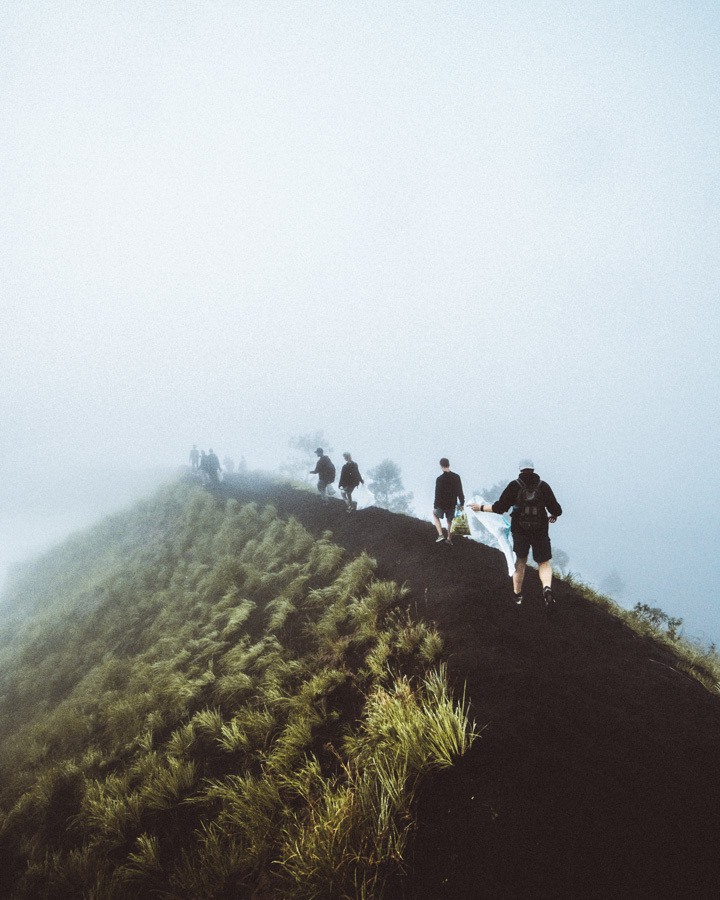 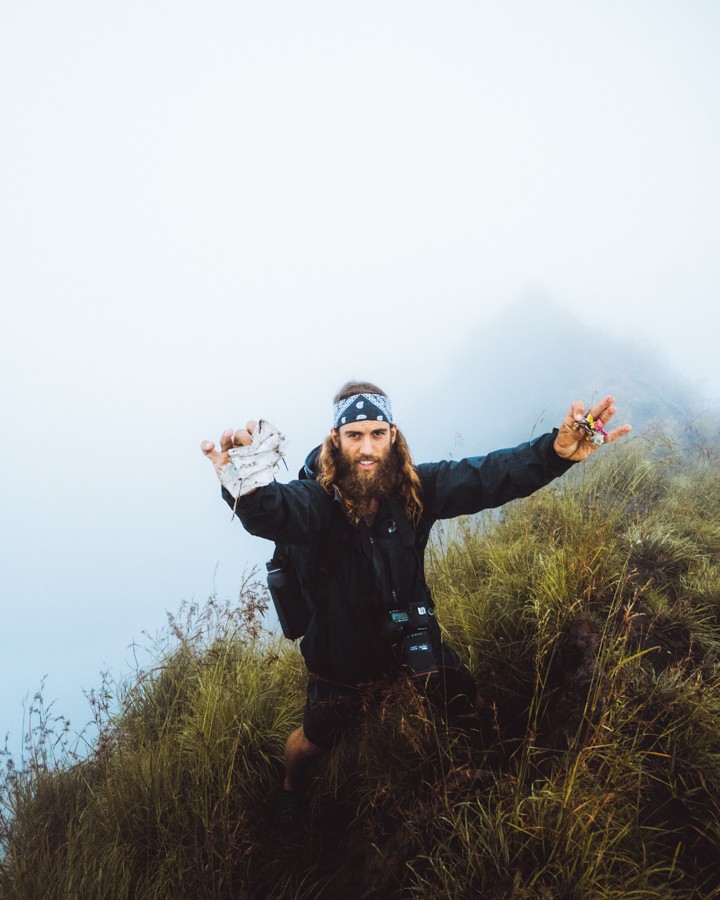 We found several dump sites in the bushes where people had literally bagged up their trash and thrown the bagged trash into the bushes or buried them. It is one thing to throw a plastic bottle into the bushes but another to go to the trouble of collecting your trash, bagging it up and still throwing it away. There are always so many questions as to the motives and reasons behind why people litter and finding these packed bags is a mystery! 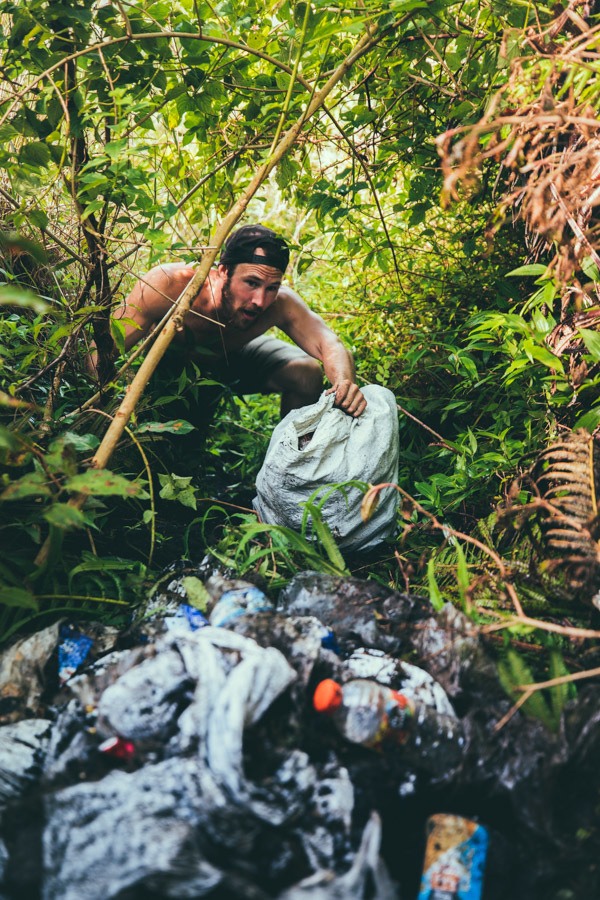 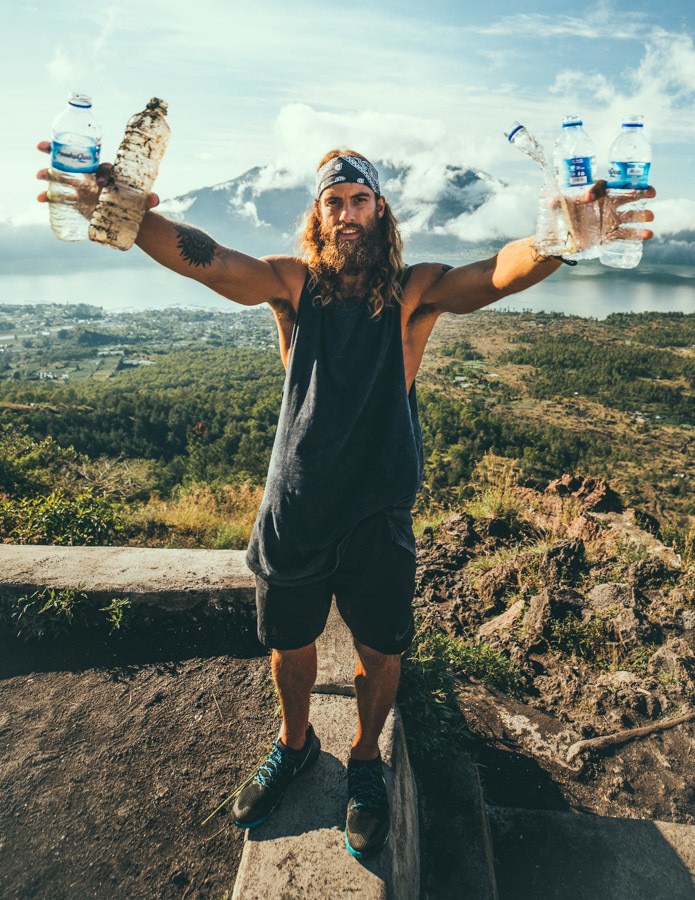 We came together again at the bottom with about 20 or more big sacks full of trash. We left it at the parking lot where we had checked and organized that the pick-up truck would be collecting it the next day to take it to the local landfill. It’s not ideal but that is how things are done in that region. Many locals still burn their trash due to lack of pick-up and facilities. 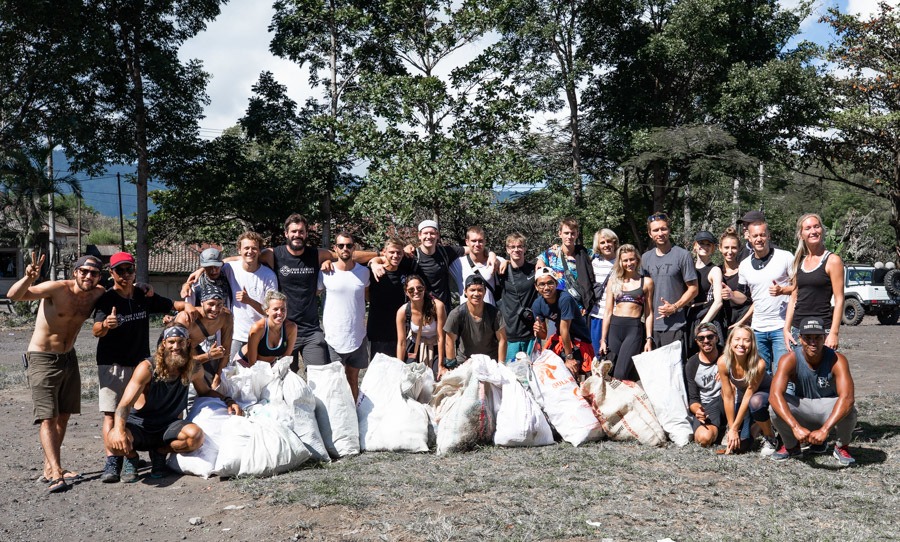 Thanks to everyone who came out to our Mount Batur Adventure Bag Cleanup event in Bali, Indonesia. You are all legends and as always it was great to meet so many inspiring people from all regions and walks of life.