This week in Panama was like all others. Hikes, workouts, running in the mountains and waterfalls. However, this was one standout moment in the last seven days. The ‘Adventure Bag Adventure Day’ was incredible.

I invited people from all over Panama to join us in El Valle de Anton for two hikes with clean-ups during both and a presentation. Bodhi hostel sold out mid-week and we even set up 20 tents in the parking lot to manage the demand. The night before the day, Bodhi was buzzing, crowded and the atmosphere was great.

The next morning we met out the front of Bodhi Hostel at 4:30 am. We had over 70 people travel from all over Panama to join us. I remember turning around from the front of the pack and looking at the crew behind me and it stretched all the way down the street. More than 70 people had come from across Panama to clean up trash and hike.

The hype was great as we headed towards La India Dormida trailhead. Although as we began to hit the incline, many of the hikers began to wonder what they had got themselves into. The humidity even at five in the morning in combination with the steep climb had some breathing heavy and wishing they were back in bed. Everyone managed to make it to the top for sunrise, which was a beautiful pop of color into the valley, which is a volcanic crater.

The clouds rolled down over the mountains and, while the sun never managed to fully burst through the clouds, the fog and the atmosphere was amazing! 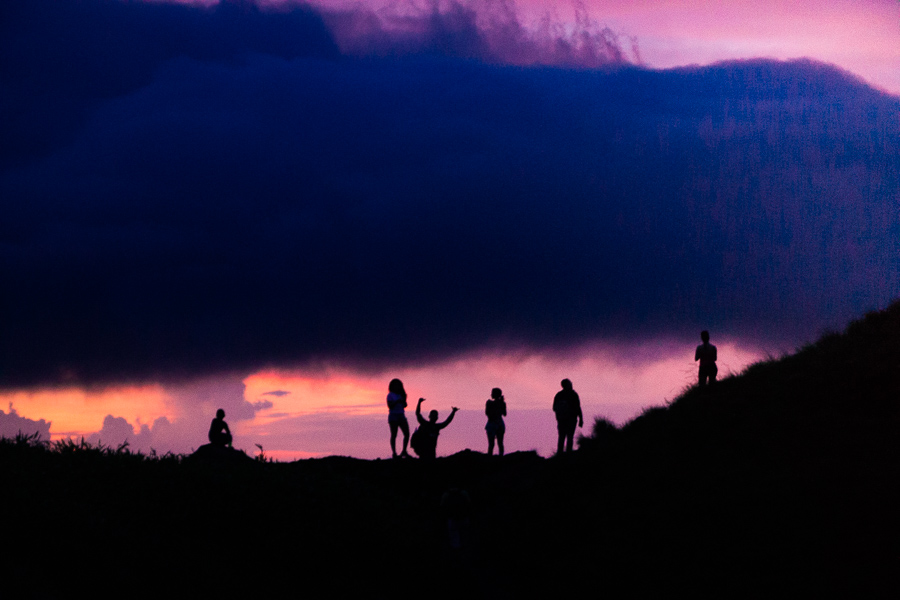 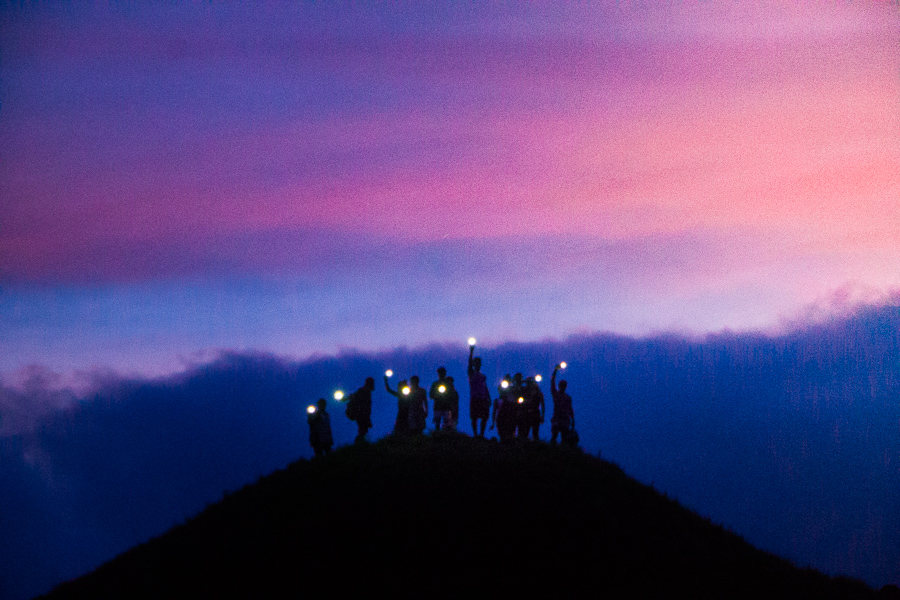 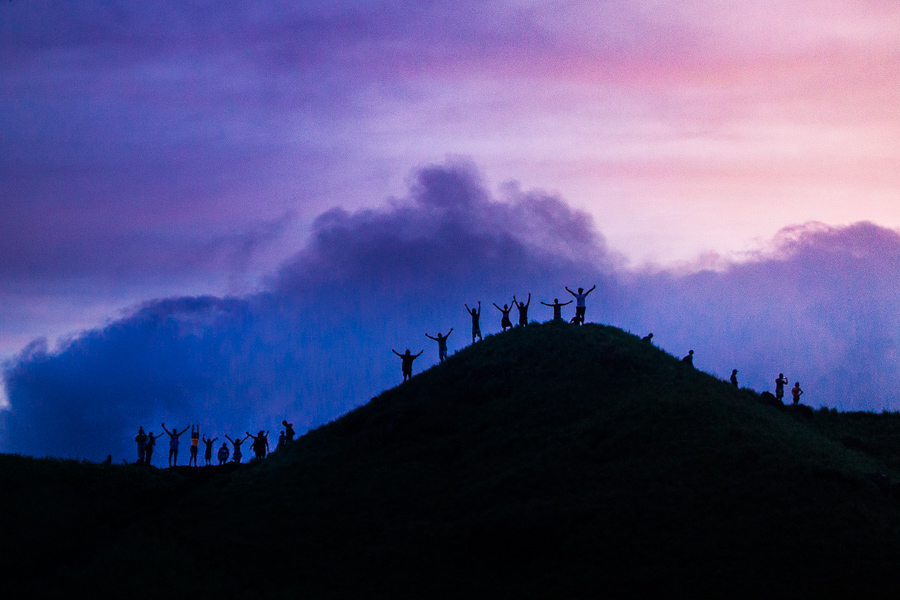 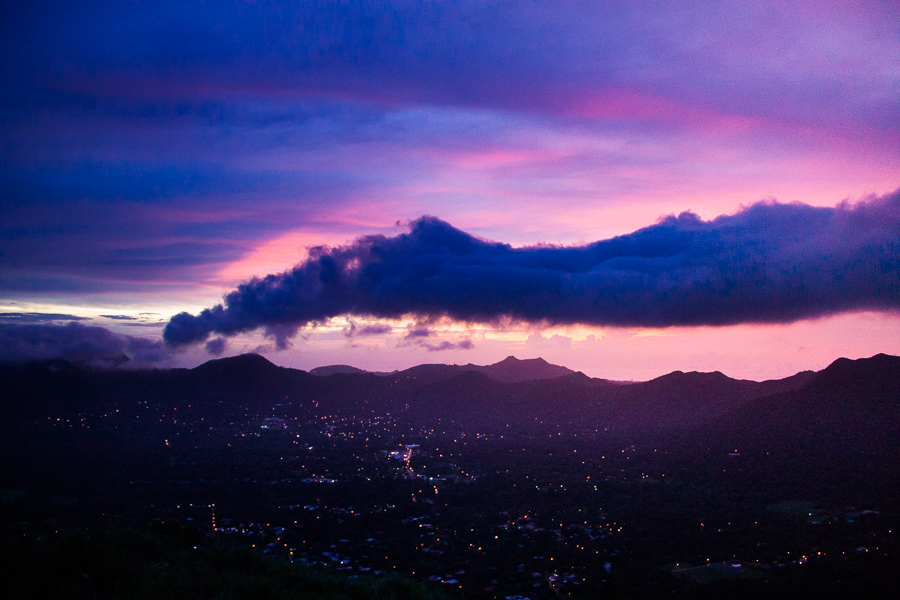 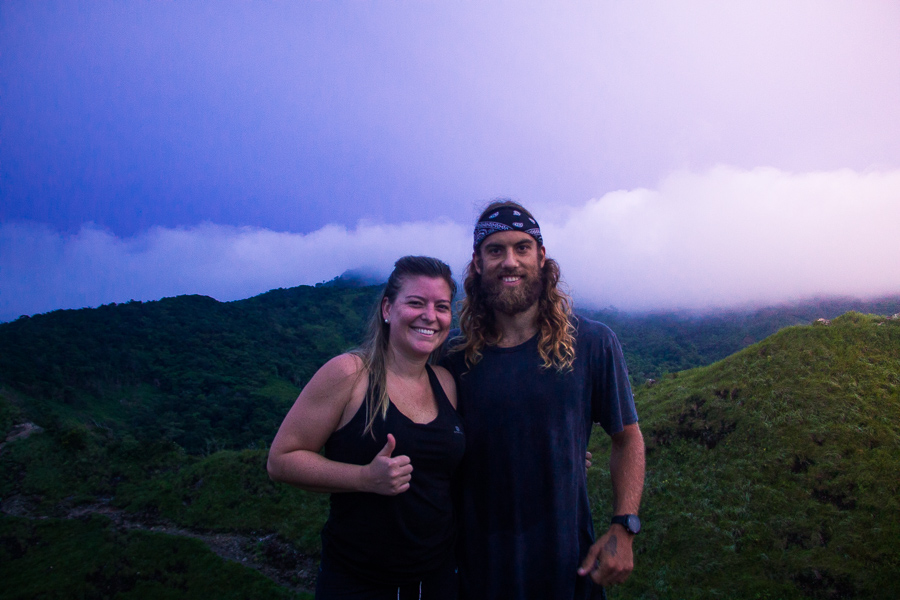 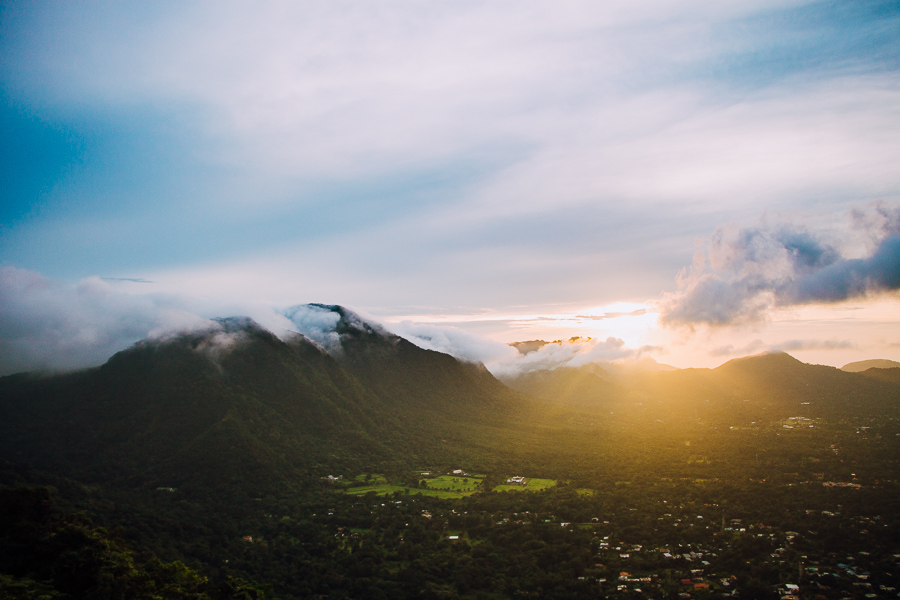 On the way down, we began to collect the trash. To begin with it was few and far between on top of the mountain and many were questioning if they would even fill their bag. Having had similar questions on trails before, I too knew how they felt. However, in my experience in Panama, you always leave with a full bag of trash. It is a sad reality but it is, in fact, a normality in Panama and many countries around the world.

As we got further down the trail towards the neighborhoods the trash became more common and everyone started filling their bags. Many had to reach for a new bag and start the process all over again. It was an eye-opening experience for many and an old habit repeated for others. As a collective, we came together and collected a huge pile of trash, which was later taken to the waste disposal center. 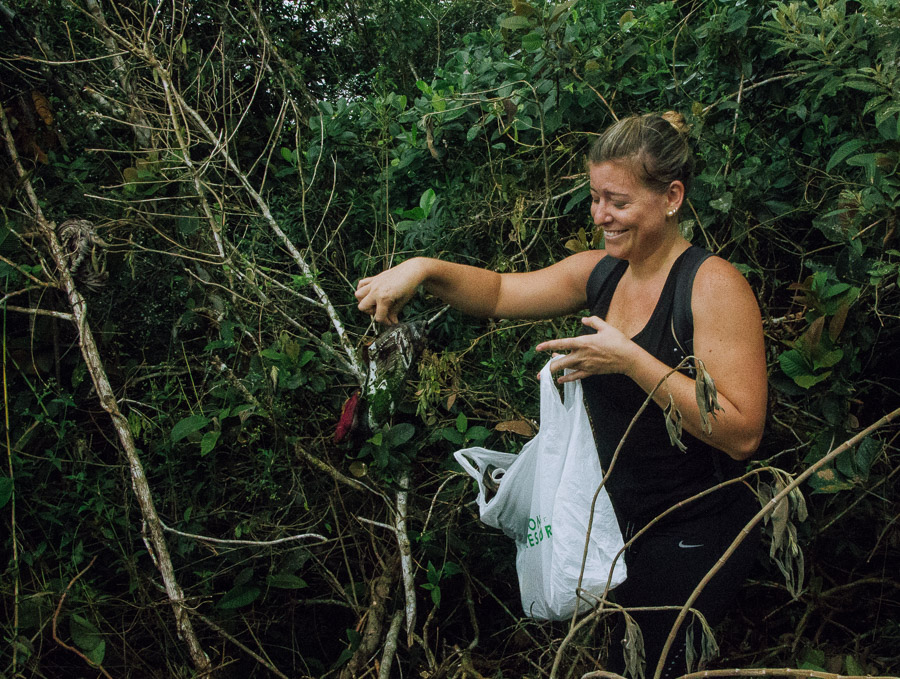 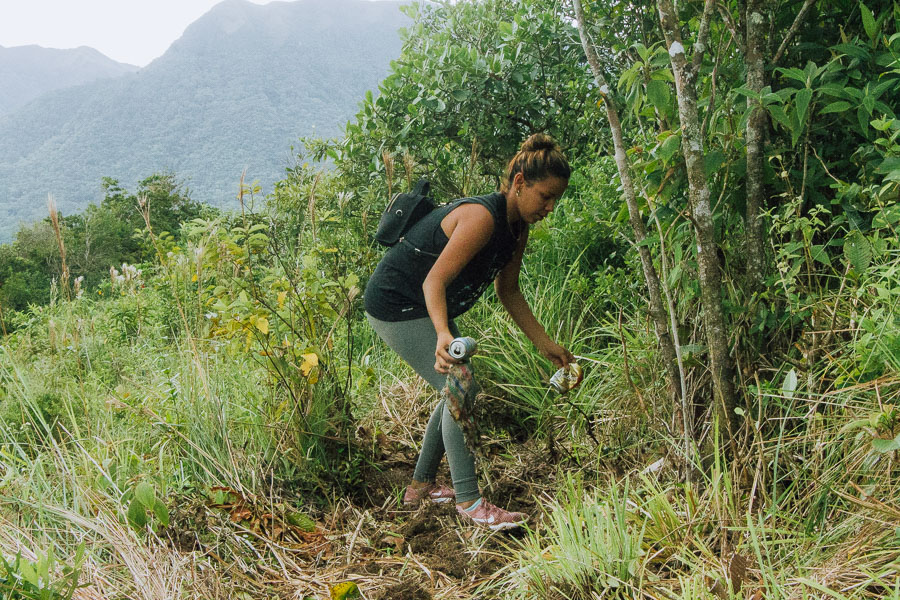 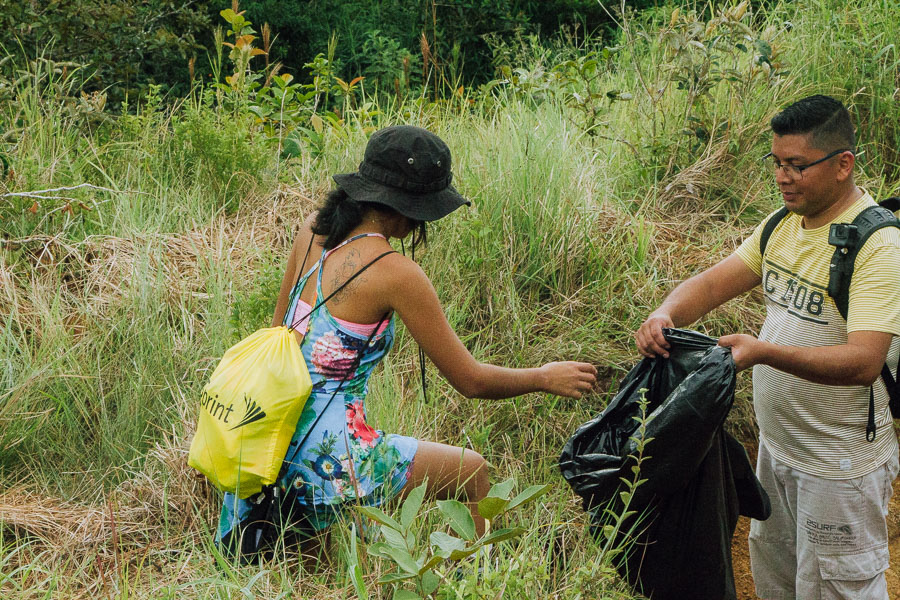 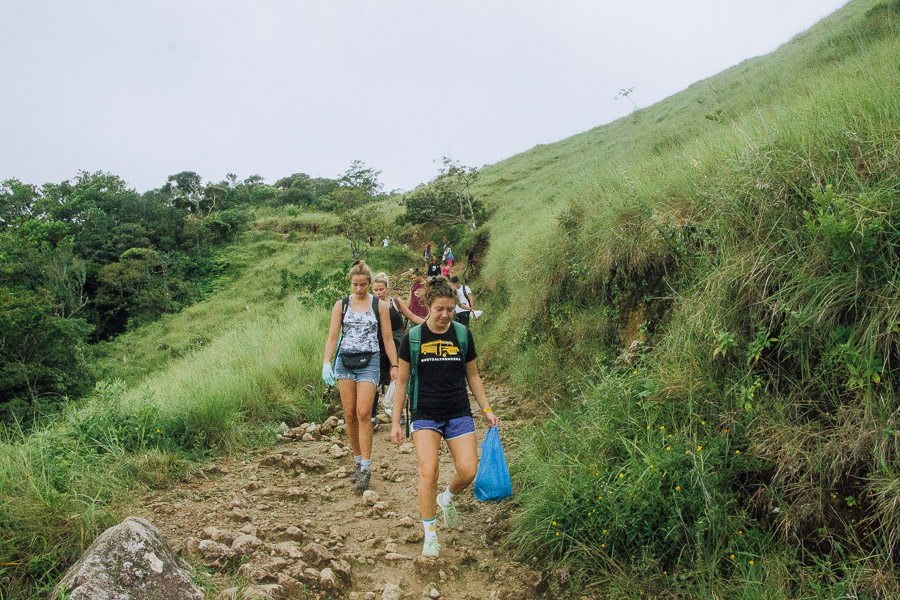 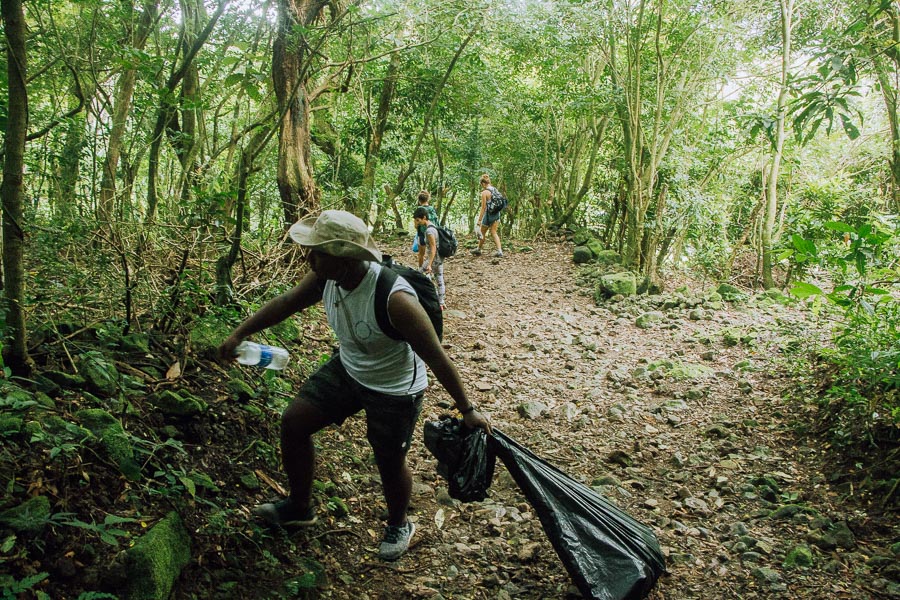 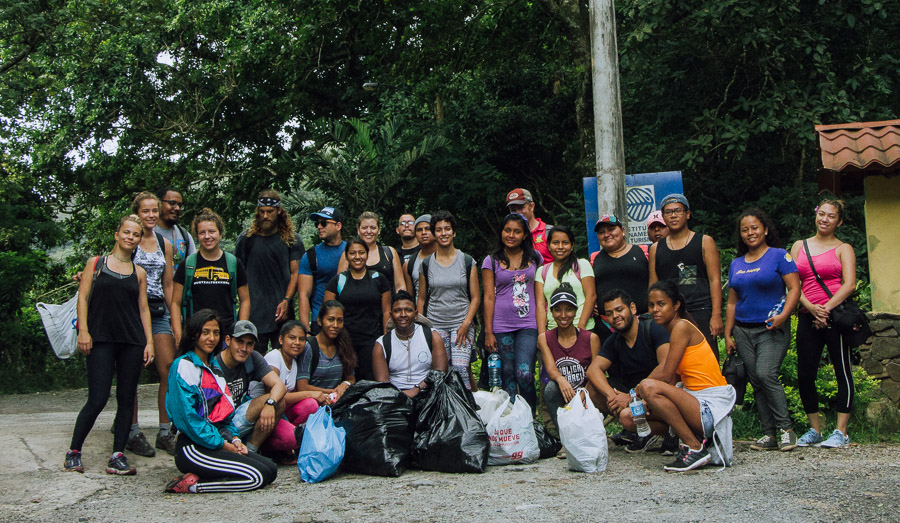 We headed back to Bodhi Hostel for a necessary serving of pancakes before quickly walking over to the Aprovaca Center for the presentation. I made a short talk about my work as a blogger and how the Adventure Bag idea came about. I discussed how to ‘Tag your Bag’ and why sharing on social media is even more important than collecting the bag itself. To inspire others to join the movement, they have to see the movement in action. We have to lead by example and make sure that example is seen!

I spoke a little bit in Spanish but also had the help of Bryan, from Caminando Panama, to help translate. 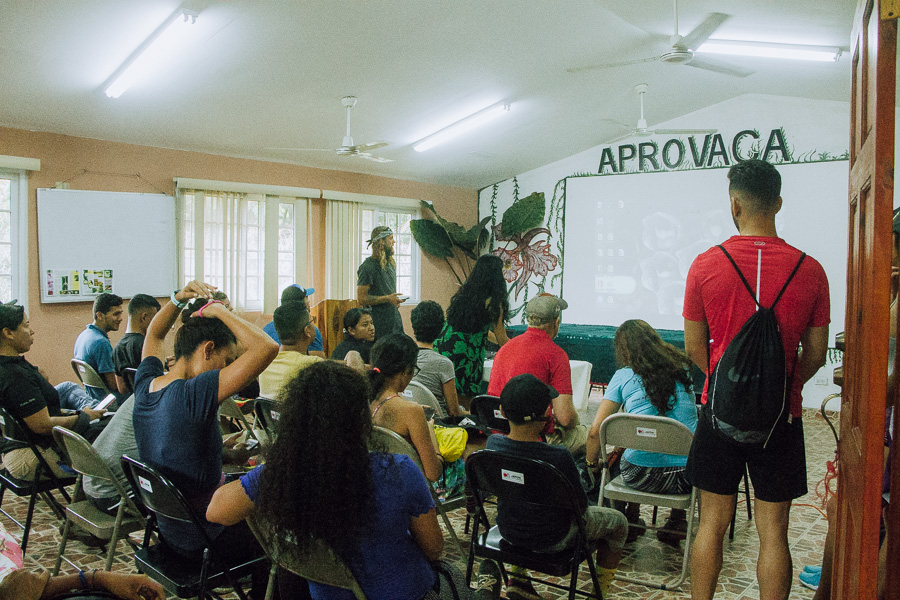 After the presentation, we headed out on the second hike of the day. With Adventure Bags at the ready, the crew was looking strong despite some sore and tired legs from the tough morning! Both hikes are no easy feat with La India Dormida being quite steep and Cerro La Silla totaling 10km.

On the way to Cerro La Silla, the trash was much more prominent. Many houses are nearby and the trail is a common thoroughfare. Litter is thrown aside quite often by the looks of the trail. We filled our Adventure Bags before even halfway through the trail!

It took us over an hour to reach the cross at the summit of Cerro La Silla, where the fresh winds and beautiful view were more than refreshing! It was awesome to see fifty people still going strong after the tough morning with people of all ages and nationalities joining us! 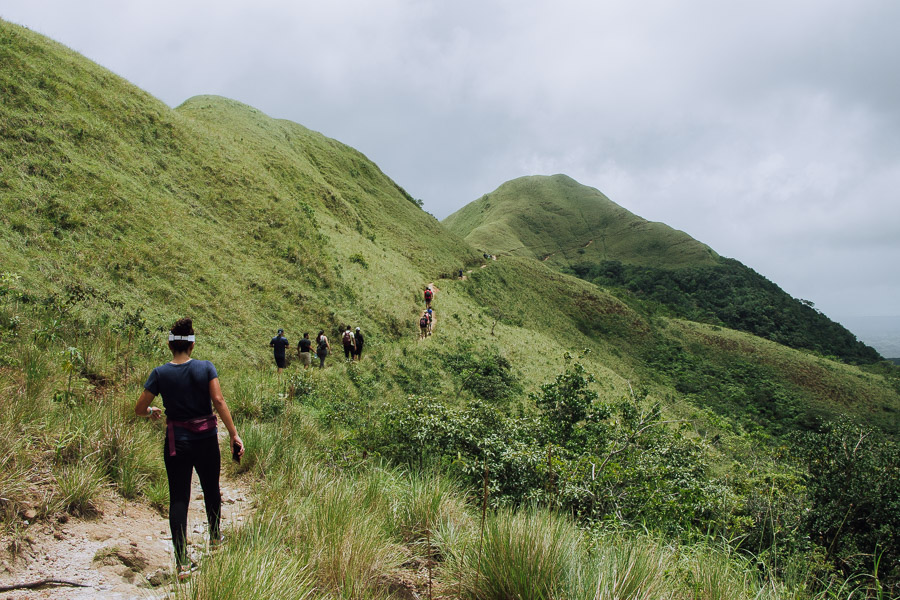 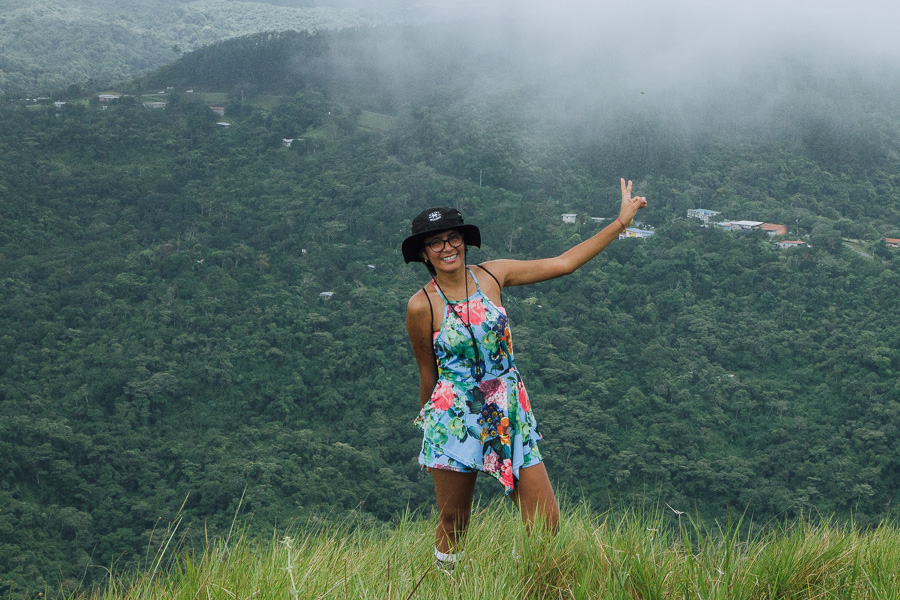 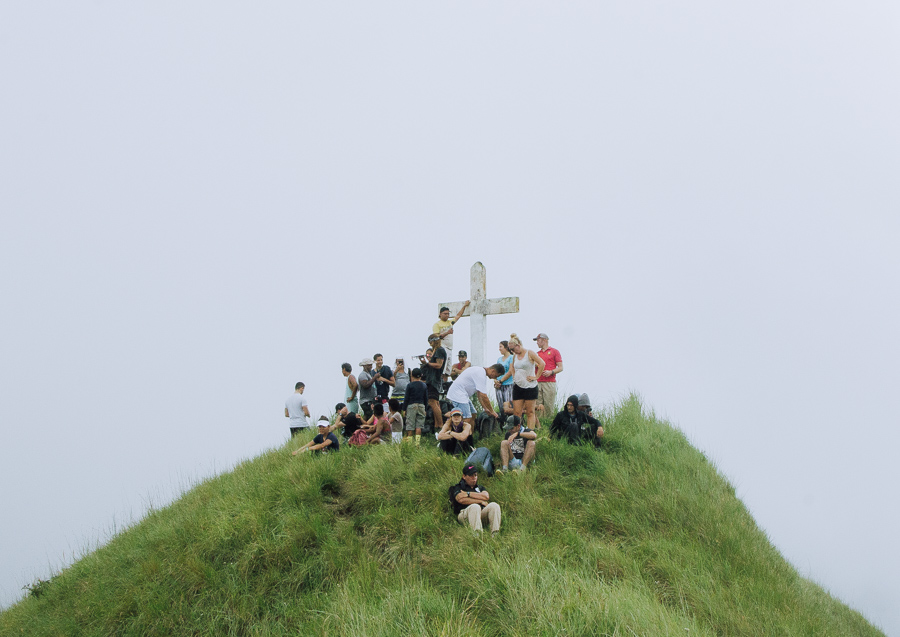 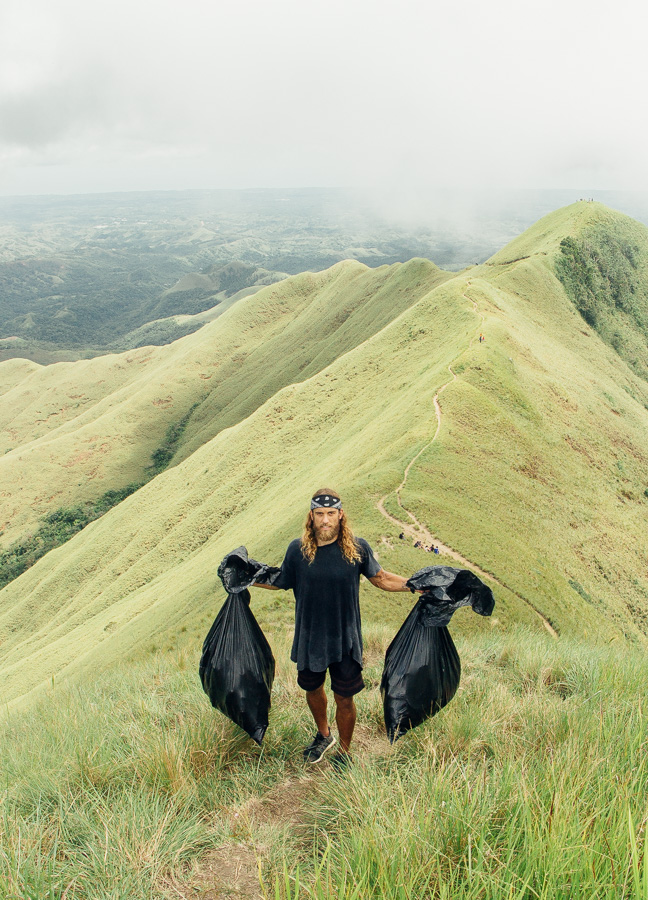 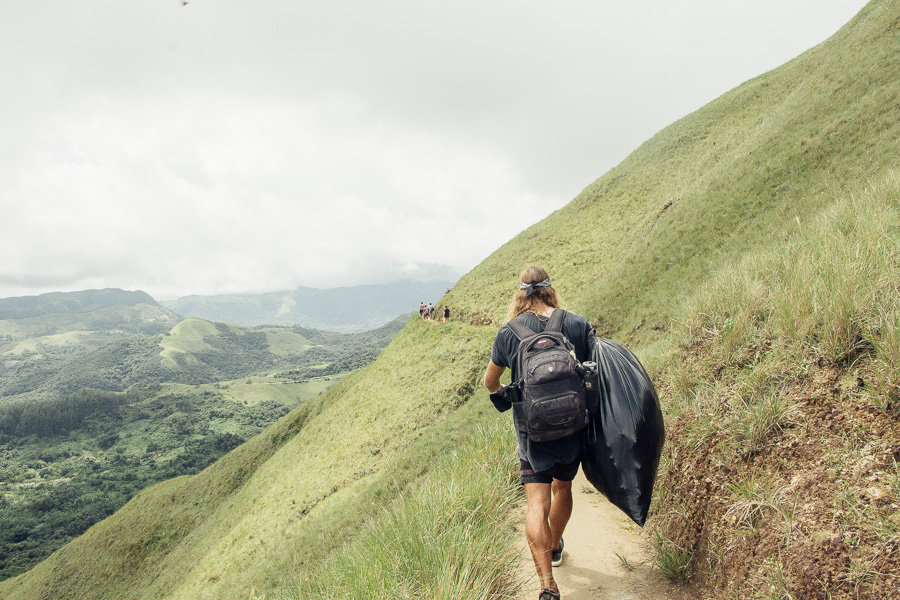 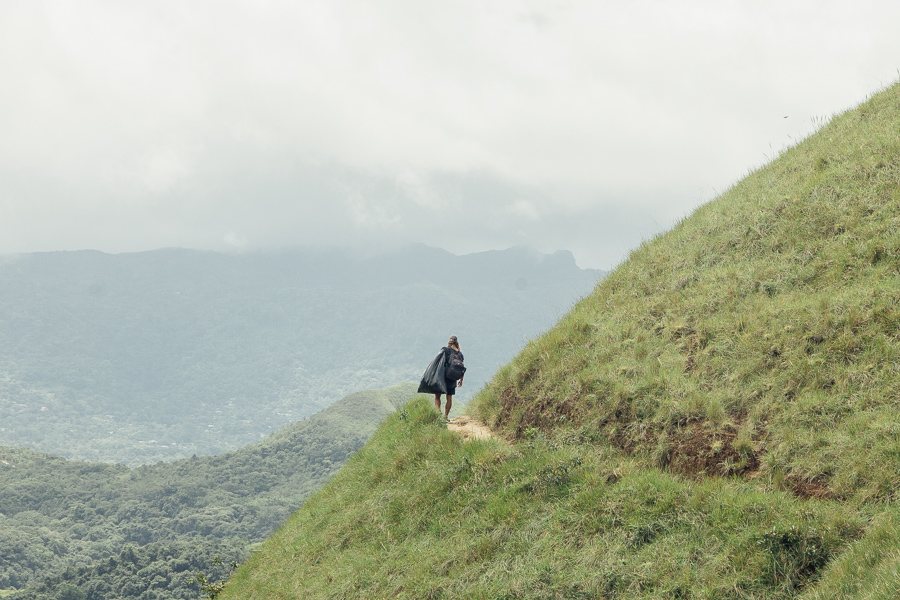 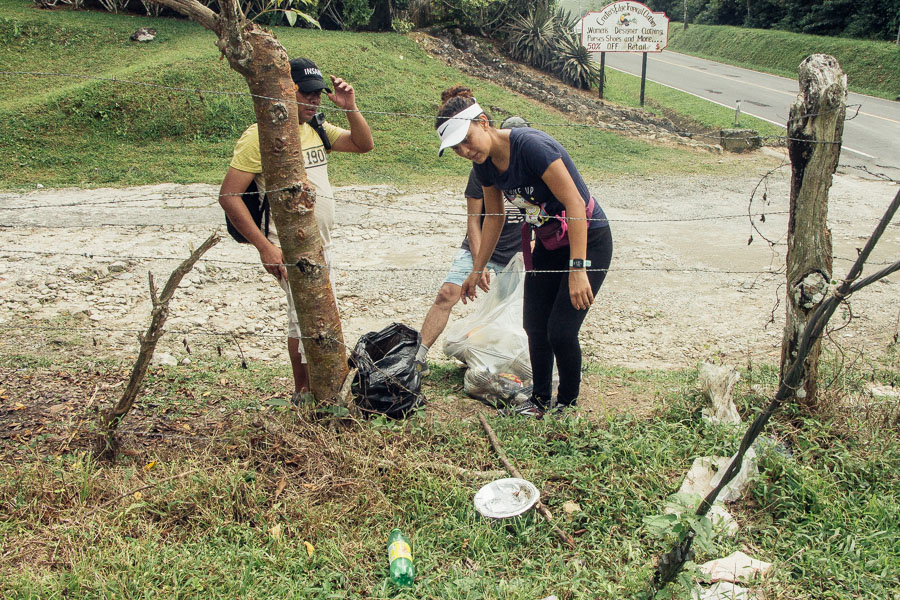 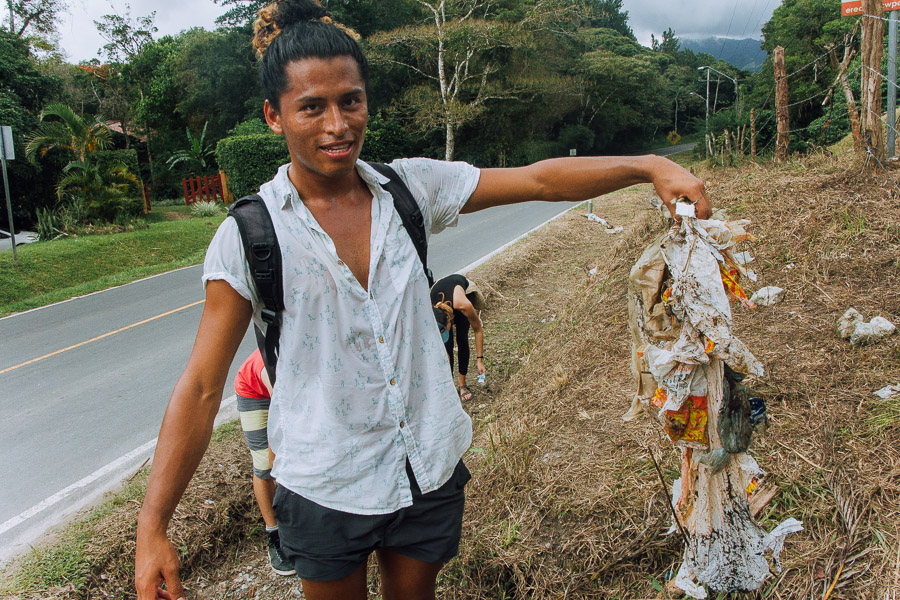 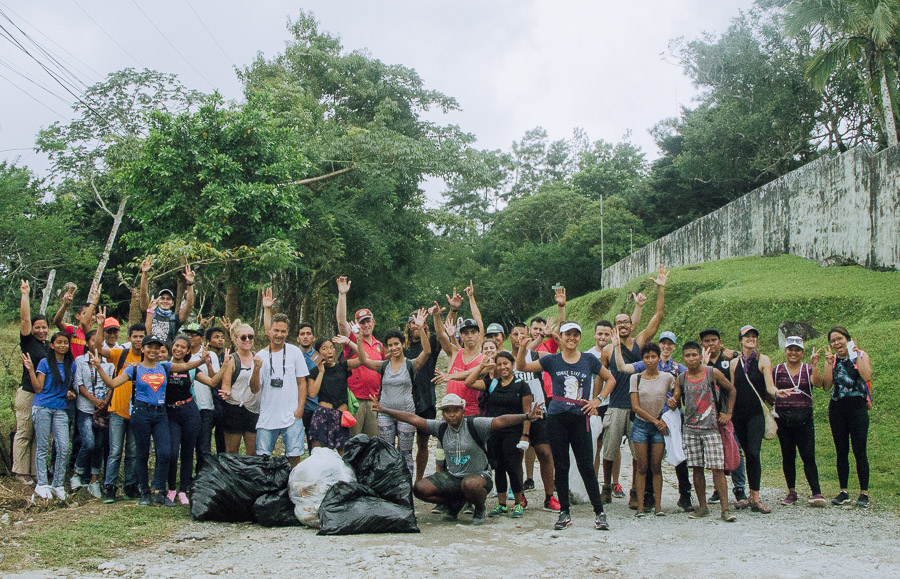