Koh Samui is one of the most popular islands in Thailand with beautiful beaches and endless palm trees. It has some amazing lookouts and I enjoyed riding my motorbike all over the island and checking them out. This is a blog post I put together about all of the best viewpoints on Koh Samui so you can enjoy them too!

The Best Viewpoints on Koh Samui

On the southern end of the Koh Samui in Taling Ngam is an extremely steep hill. Hillcrest Drive winds its way up to the top of the hill, passing several resorts on the way. It is possible to drive the moped up, which I did but I highly suggest walking as it is very dangerous on the way down.
From the viewpoint, which is probably only frequented by locals in the area if by anyone at all you can see across the entire ocean and watch is the storm clouds roll through. I enjoyed this viewpoint on several occasions while staying in Taling Ngam and each time a massive storm came straight at me, which was awesome to watch. You definitely won’t find this viewpoint in the tour guide but it really is one of the best views on Koh Samui. There are lots of lookouts on this list that you won’t find in the guide book. Get ready to be adventurous as you discover some of the best viewpoints on Koh Samui.

It sounded like it had the potential for the greatest view as it was suggested to me by multiple people as I asked around for good views on Koh Samui. At the entrance, I was greeted by a worker at a desk who said it was a $3 entrance fee. I reluctantly handed it over and to be honest, it wasn’t really worth the $3. A 10-minute climb with a pretty solid incline had me breathing heavy when I reached the summit. The view at the top was okay but it was mostly just a bed of trees beneath and the ocean in the distance. It’s worth it to enjoy a beer at the top but nothing mind-blowing. 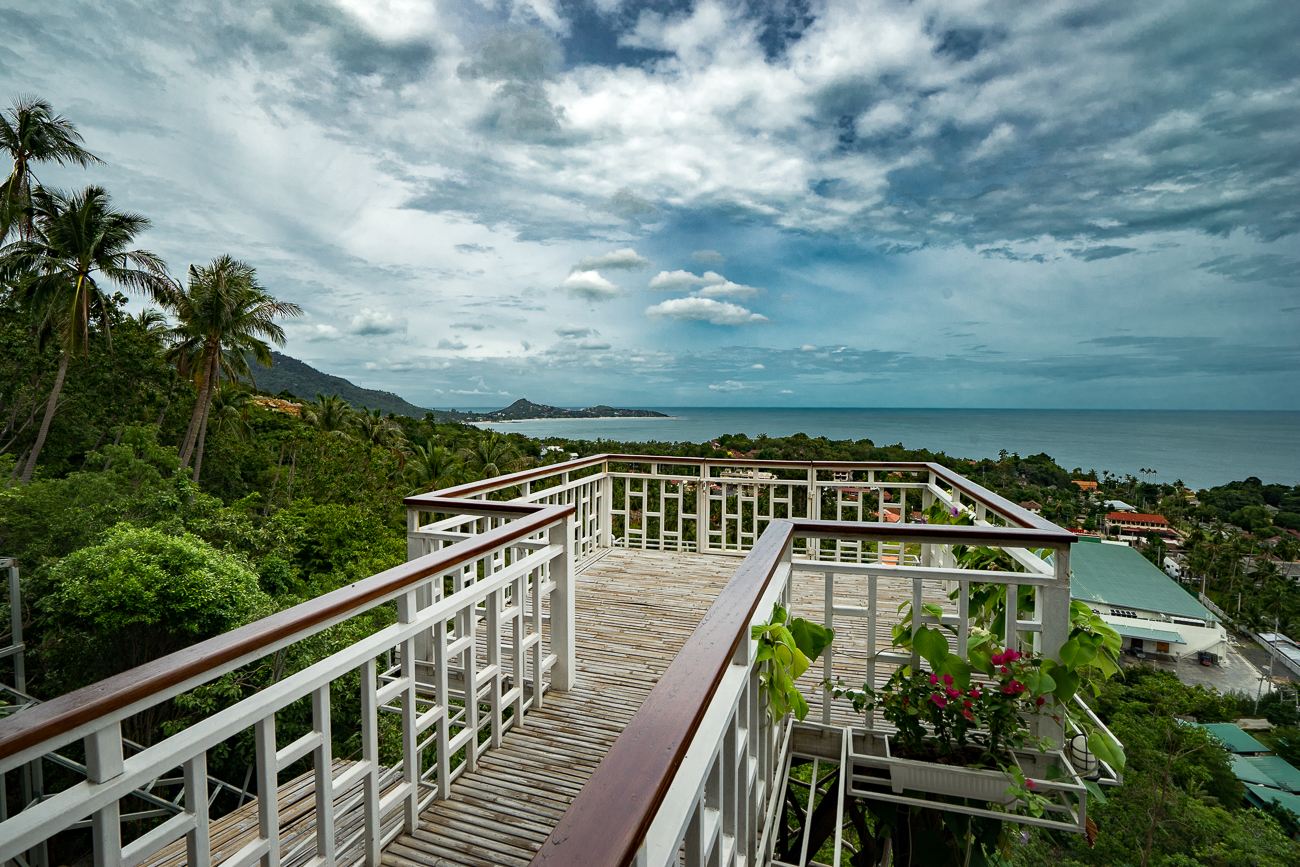 At the base of Lamai Viewpoint, there is a pretty spectacular waterfall. Unfortunately, it has a little manmade platform beneath it and is quite touristy but a great spectacle nonetheless. Alongside the waterfall is Valentine Stone which is a little less impressive. Included in your $3 admission is a fish foot spa. I thought this would be a nice relaxing break in the day, having previously experienced a fish foot spa in Bali, Indonesia. However, the fish in this foot spa was huge and as they nibbled at my feet it was too much to handle. I gave up on that pretty quickly and jumped back on my moped in search of more adventures. 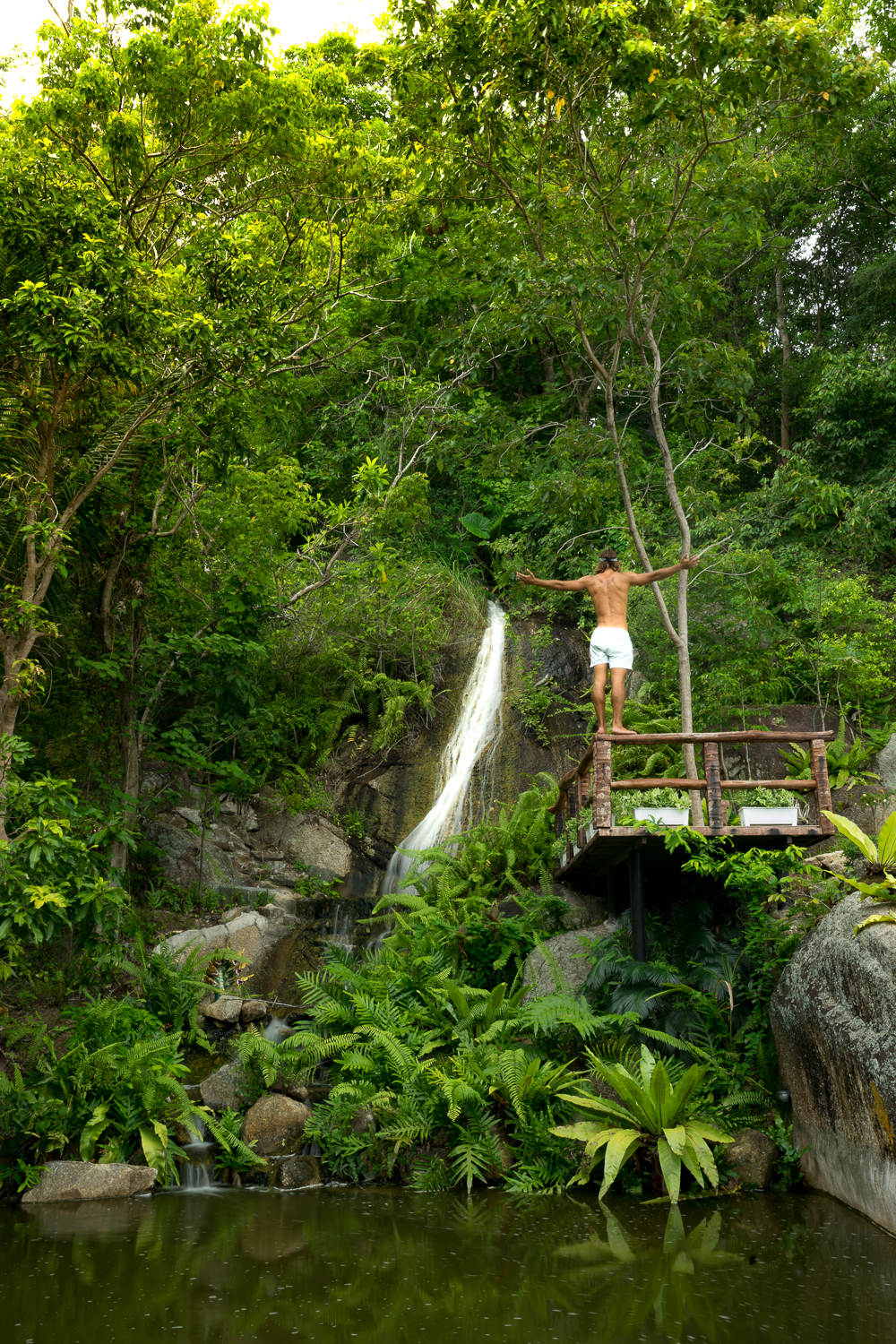 This was my favorite viewpoint I visited while on Koh Samui. It is a 20-30ft rounded stone resting on a natural platform. It’s an unbelievable natural occurrence that I am glad I made the effort to visit. I sat next to the Stone for half an hour taking in the view of Lamai Beach and the surrounding areas. I wrote a full blog post about his because I loved it so much. 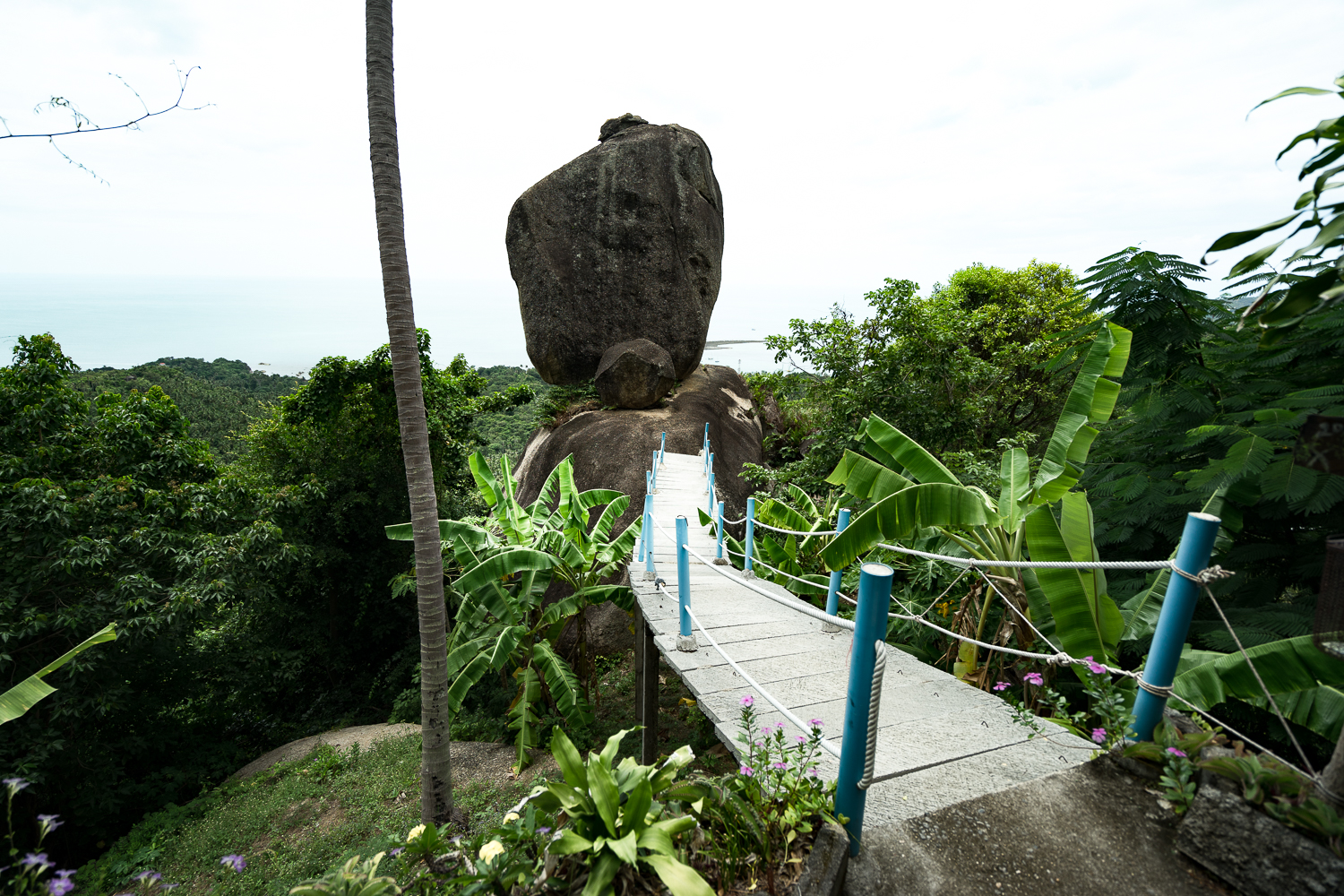 If you love jumping into the ocean there aren’t too many great spots to do so on Koh Samui. However, if you park at the luxurious Intercontinental hotel and walk along the beach you can hang out on their private pier. Jumping off the pier was something I did on several afternoons while staying in the southern end of the island. There’s a ladder to pull yourself back up and the water was definitely deep enough. This is a good spot to hang out during sunset as you will be looking directly towards the action and was one of my favorite things to do on Koh Samui. 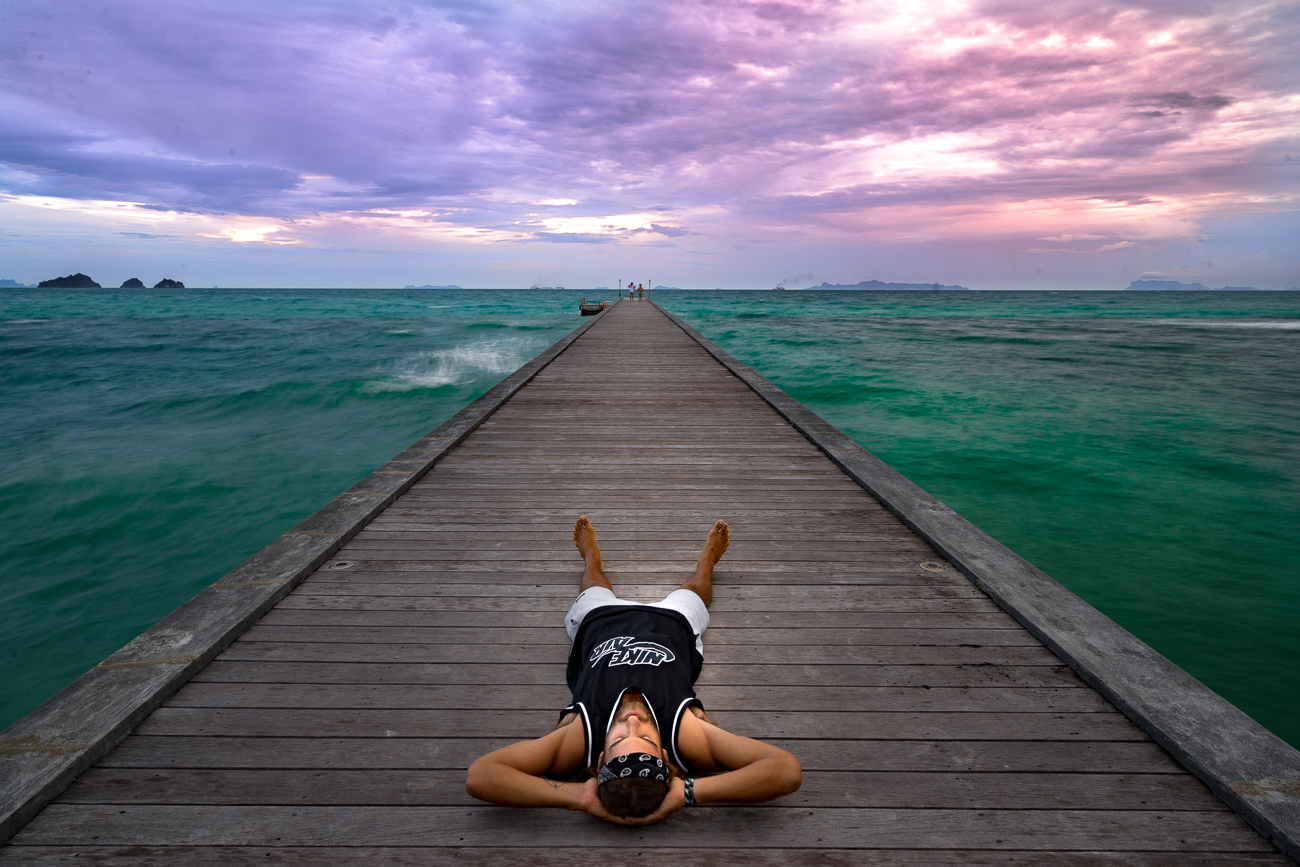 Not to be confused with the Lamai Viewpoint I mentioned earlier this is a rock formation right on the beach. The rocks on Koh Samui really give the beaches a wow factor and I thought that was really what separated the islands from other tropical locations around Asia. At Lamai Beach Viewpoint I clambered over the rocks, while most tourists just stood around taking photos. I found a spot to jump in the water much to the horror of the tourists who thought I was about to die. The water was only 6-feet deep so be careful in this spot and don’t jump from any crazy heights. This was definitely one of my favorite viewpoints on Koh Samui. 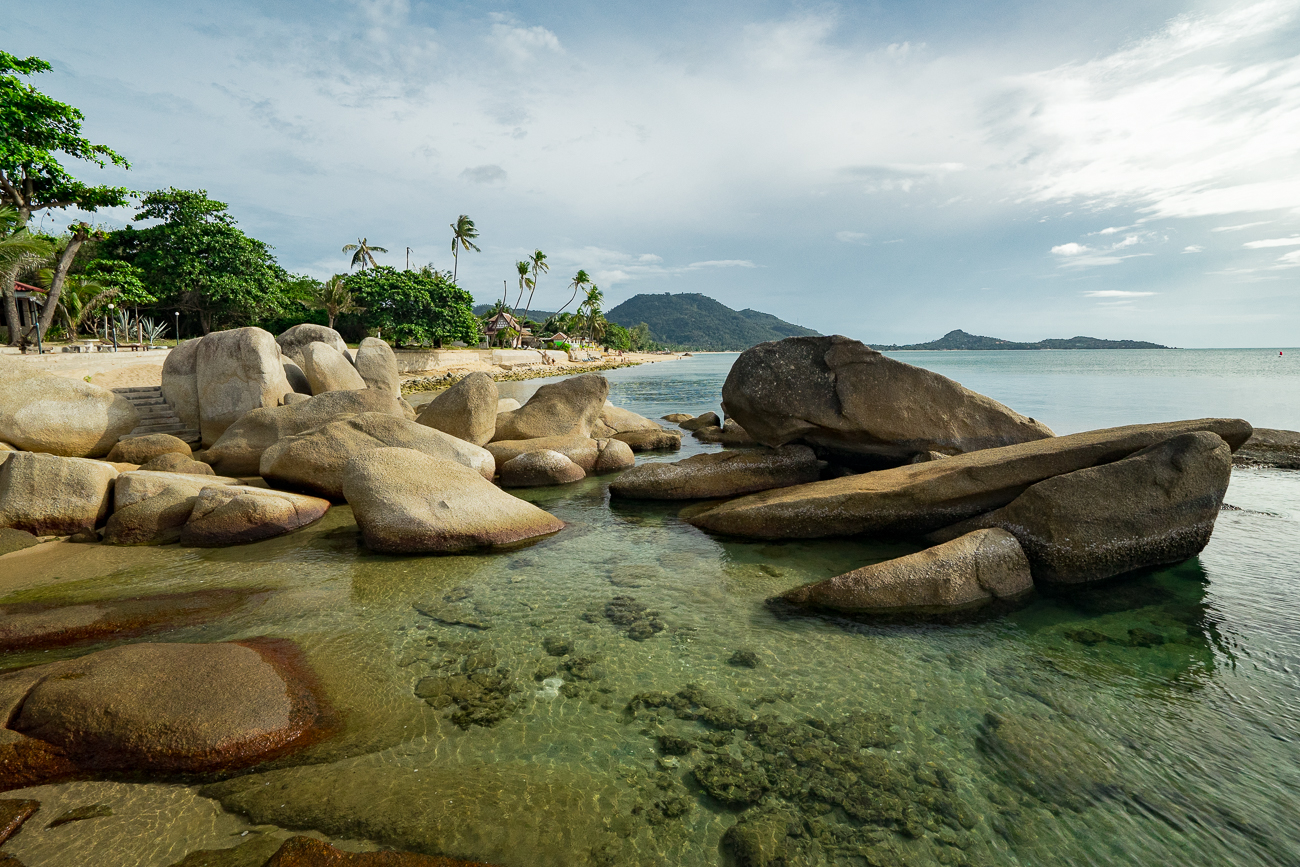 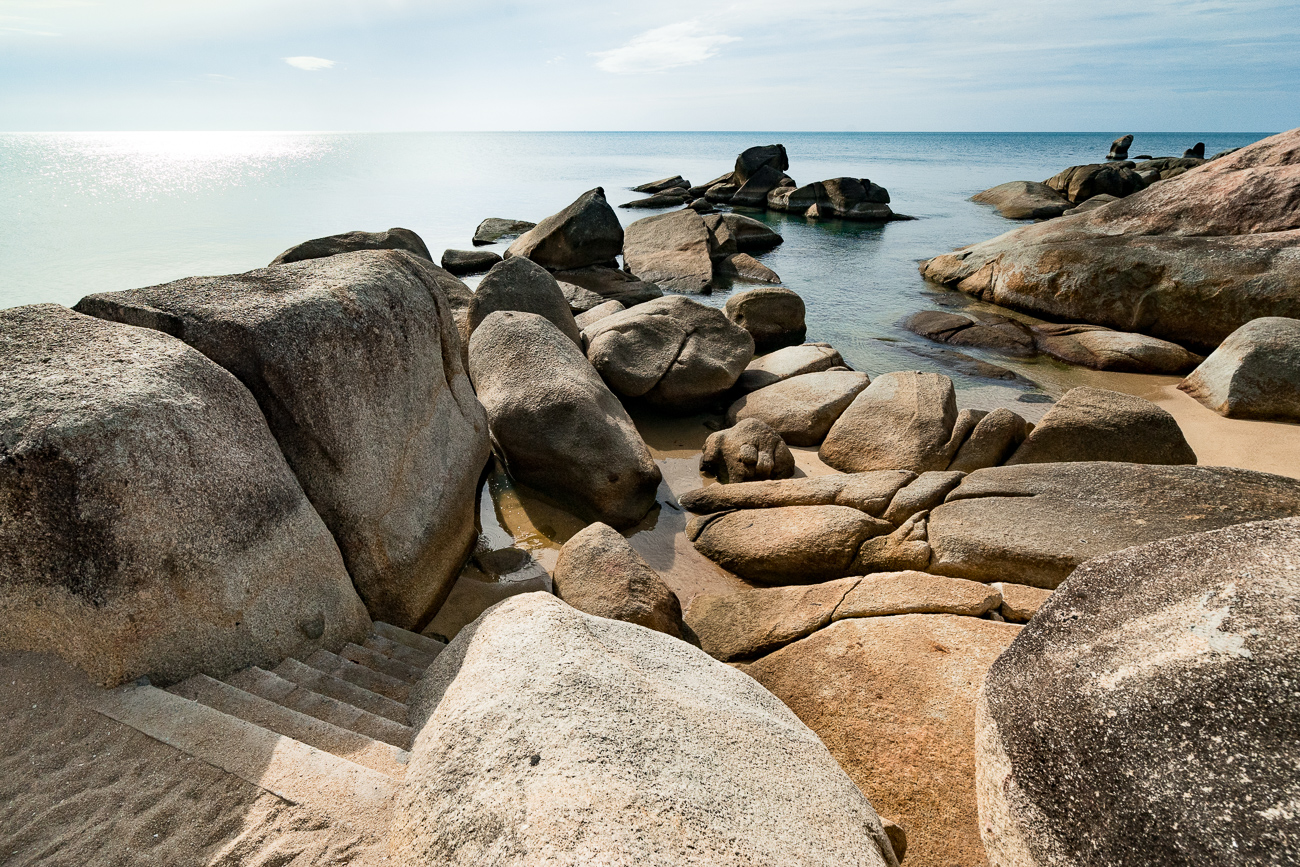 This is a popular area among tourists for a bizarre reason. There is a rock formation called the Grandmother and Grandfather rock. Which is essentially a rock formation that resembles the female and male genitalia. I didn’t see any signs around but definitely, do not climb this. I witnessed one guy climbing on top of it for a photo and the local tour guides and vendors were up in arms yelling and screaming at him in disgust. 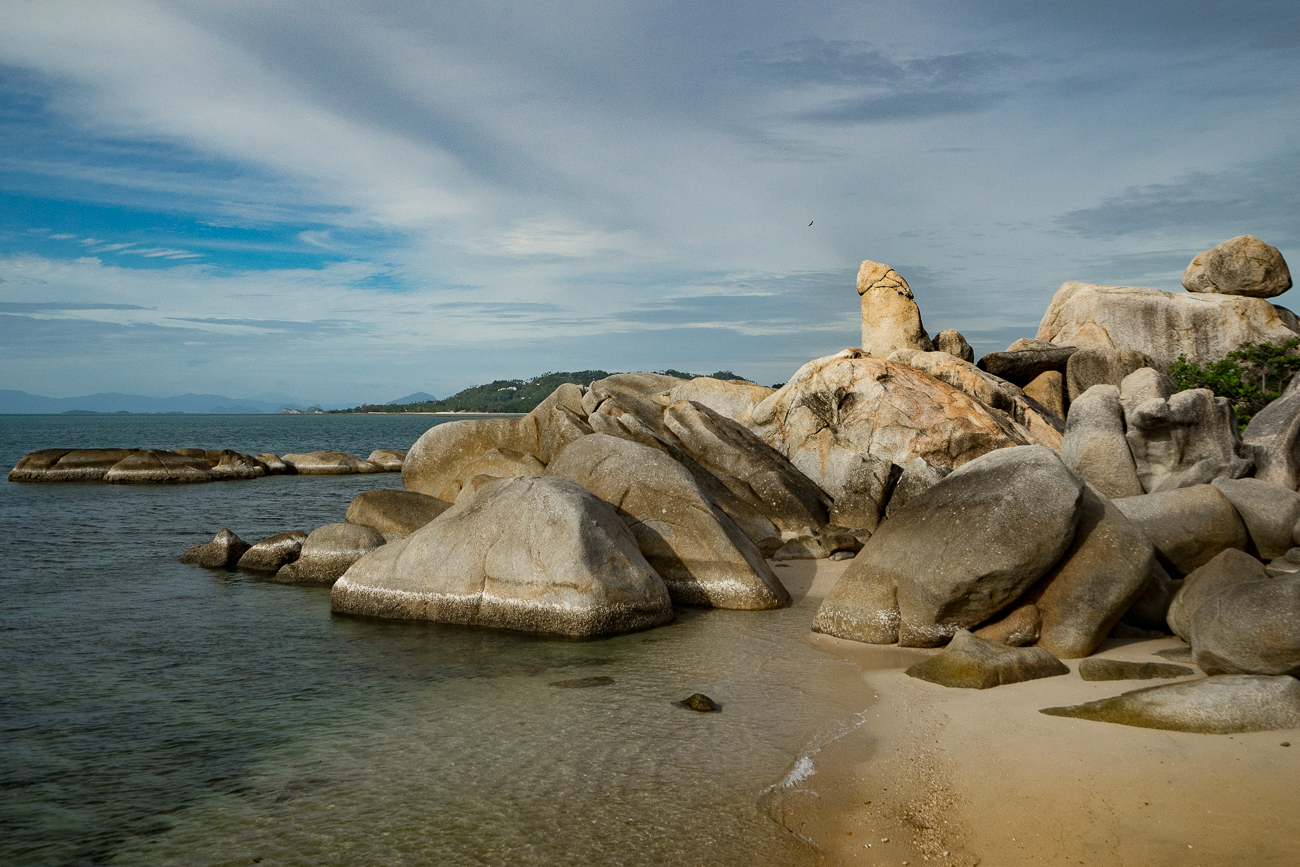 This viewpoint is very popular among tourists with a number of tour buses and vans dropping off groups to have a quick look. A steep staircase leads down to a view of the east coast of Koh Samui. Definitely worth stopping for as it is one of the nicer views of Koh Samui but it’s not as secluded as many of the other viewpoints on the island. 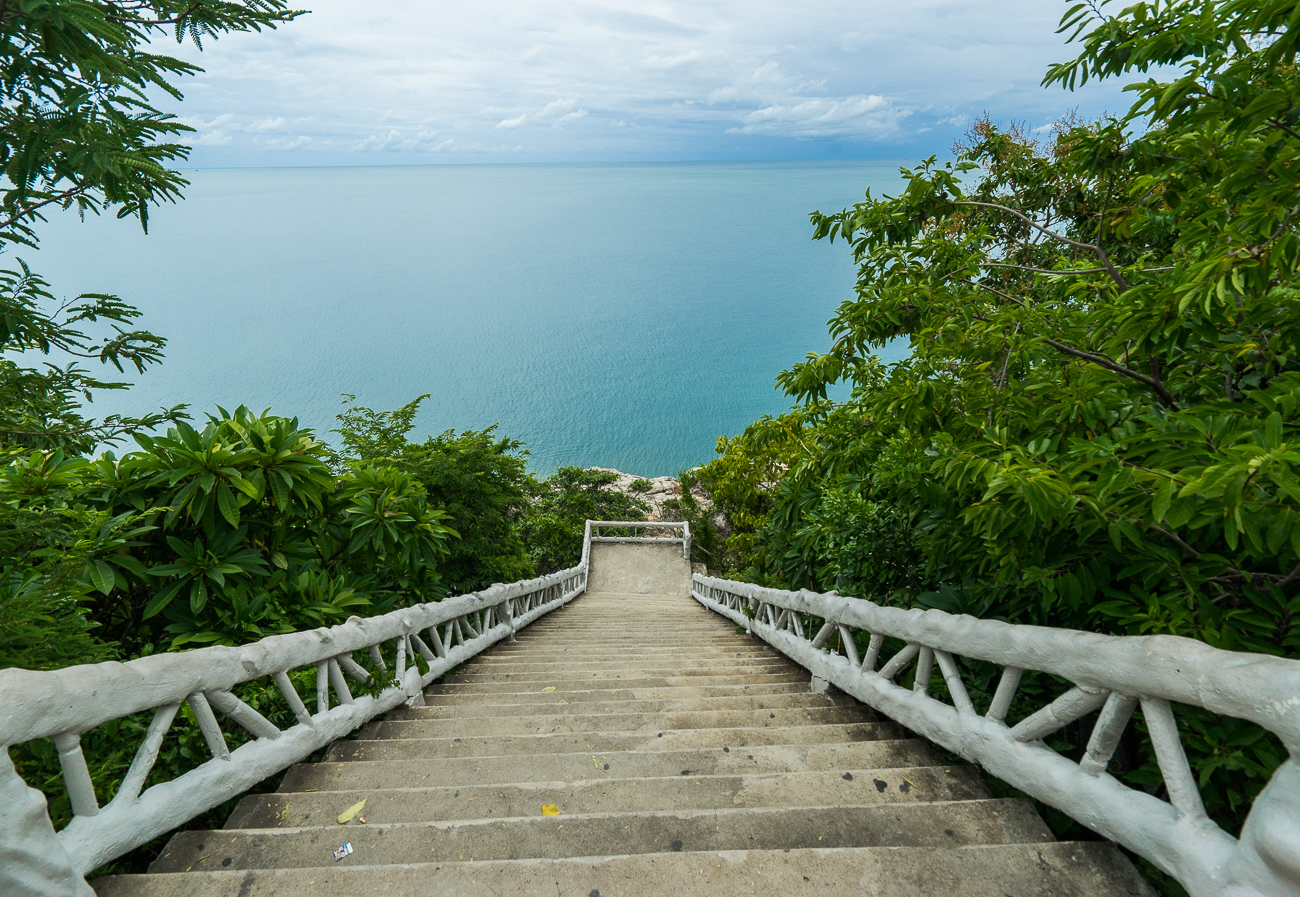 Probable one of the coolest beaches on the Island, it has crystal clear water but also adventure at either end of the bay. You can rock climb your way up and around the giant rock formations to give yourself a view of the bay from either side. 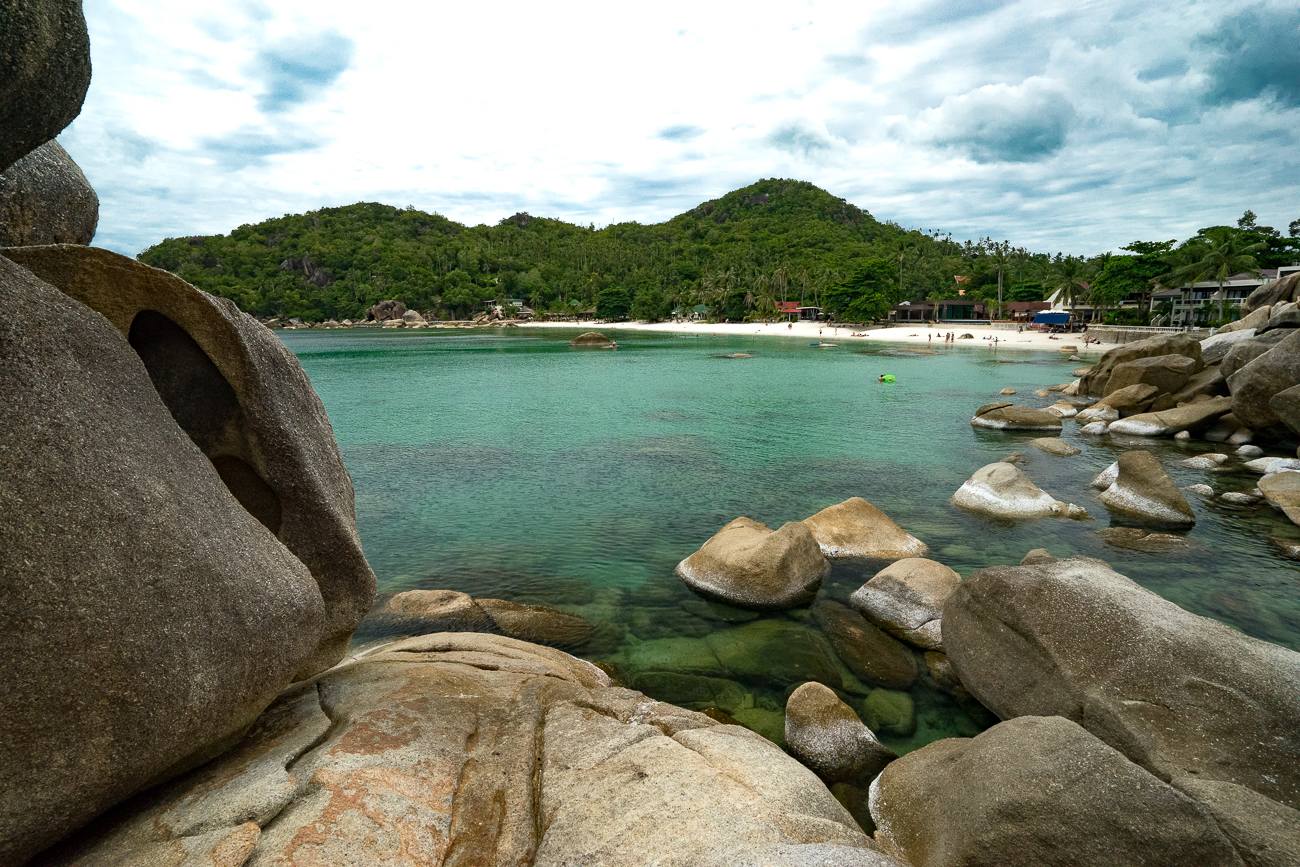 I didn’t quite make it the whole way along this drive as it started pouring halfway through the route. It is notoriously steep so I decided to turn back as the safe option. This was a very rural road, which cut right through the middle of the island. Coconut trees were plentiful and I would have loved to have made it higher up on this route to explore the views. You will have to tell me how it was.

Looking for great family spots to stay with the kids Thailand? Here’s a guide to the best family-friendly hotels in Thailand. 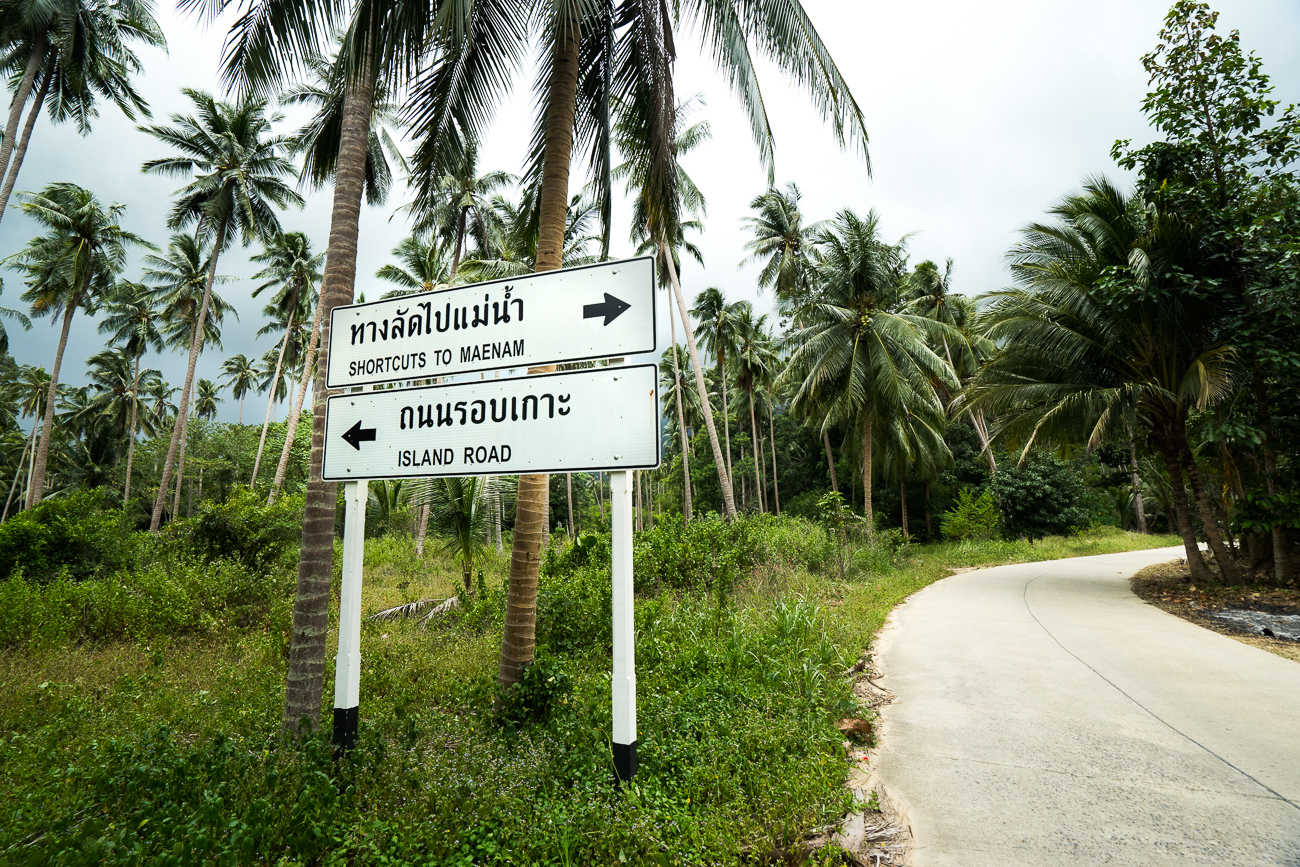 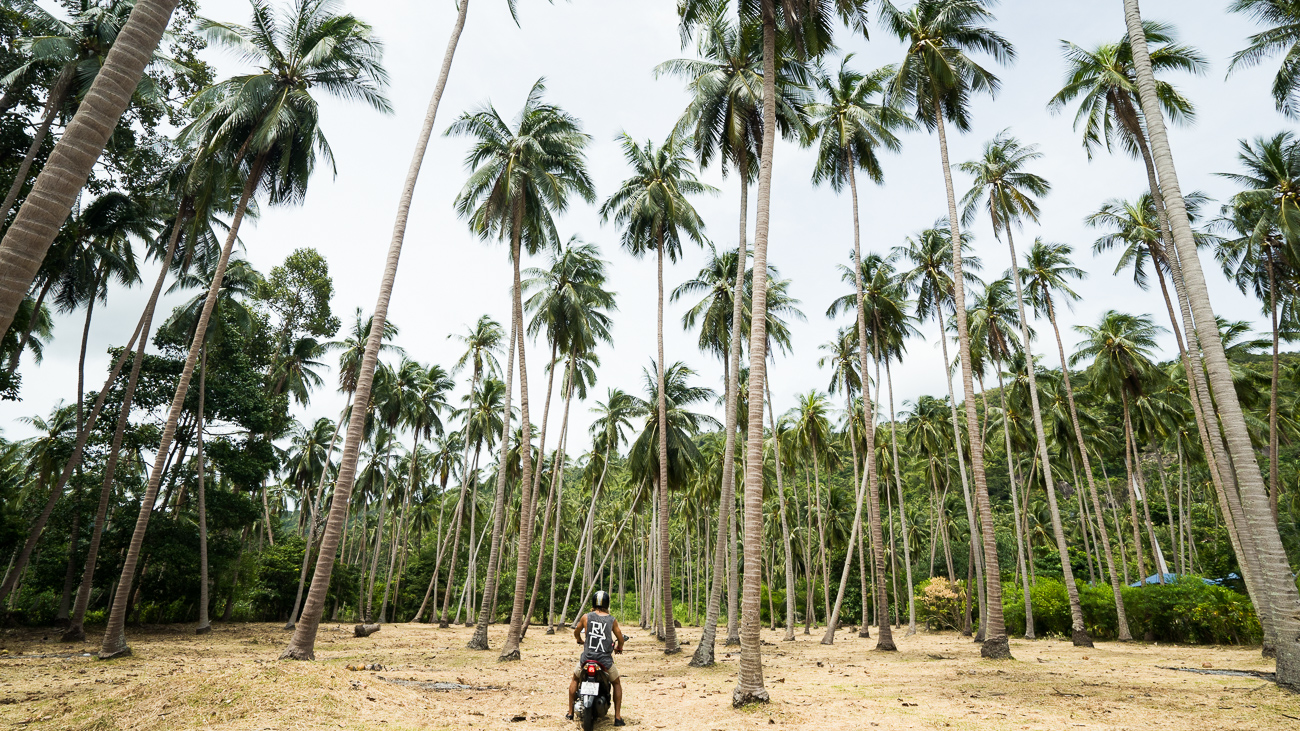 The next two viewpoints definitely don’t have a name that I know of and one of them involved ducking under a barbed wire fence. It wasn’t the riskiest trespass I have ever done but just a heads up.

On the northern side of the Cliff Bar is a set of stairs down the side of the cliff that has been overgrown by trees and grass. I saw it as I was driving and doubled back to check it out. Good decision. The stairs led down to a giant rock in the ocean that was attached to land by a small little bridge. It was a cool spot to hang out for a while and you can look back at Silver Beach. With it’s rock bridge and peaceful spot, this is definitely one of the most unique viewpoints on Koh Samui. 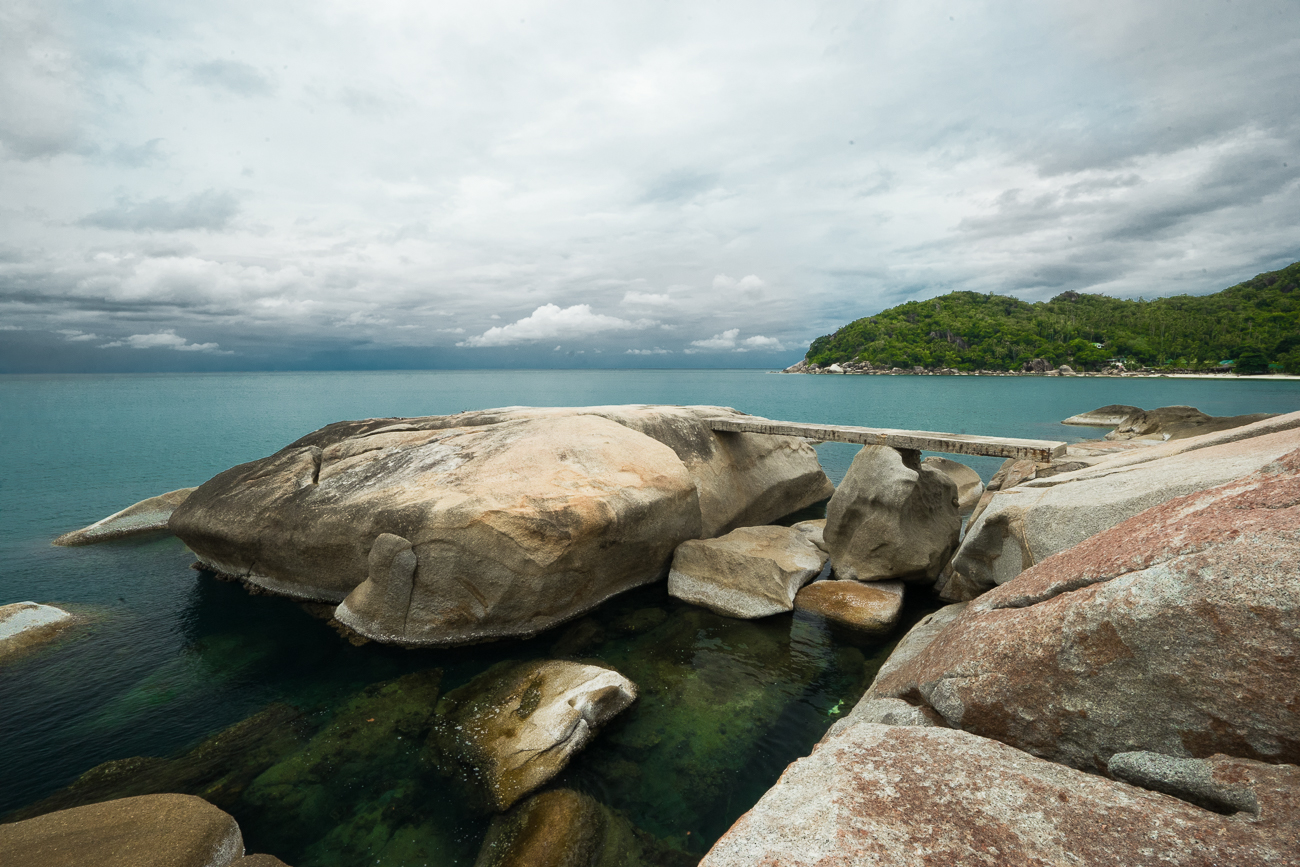 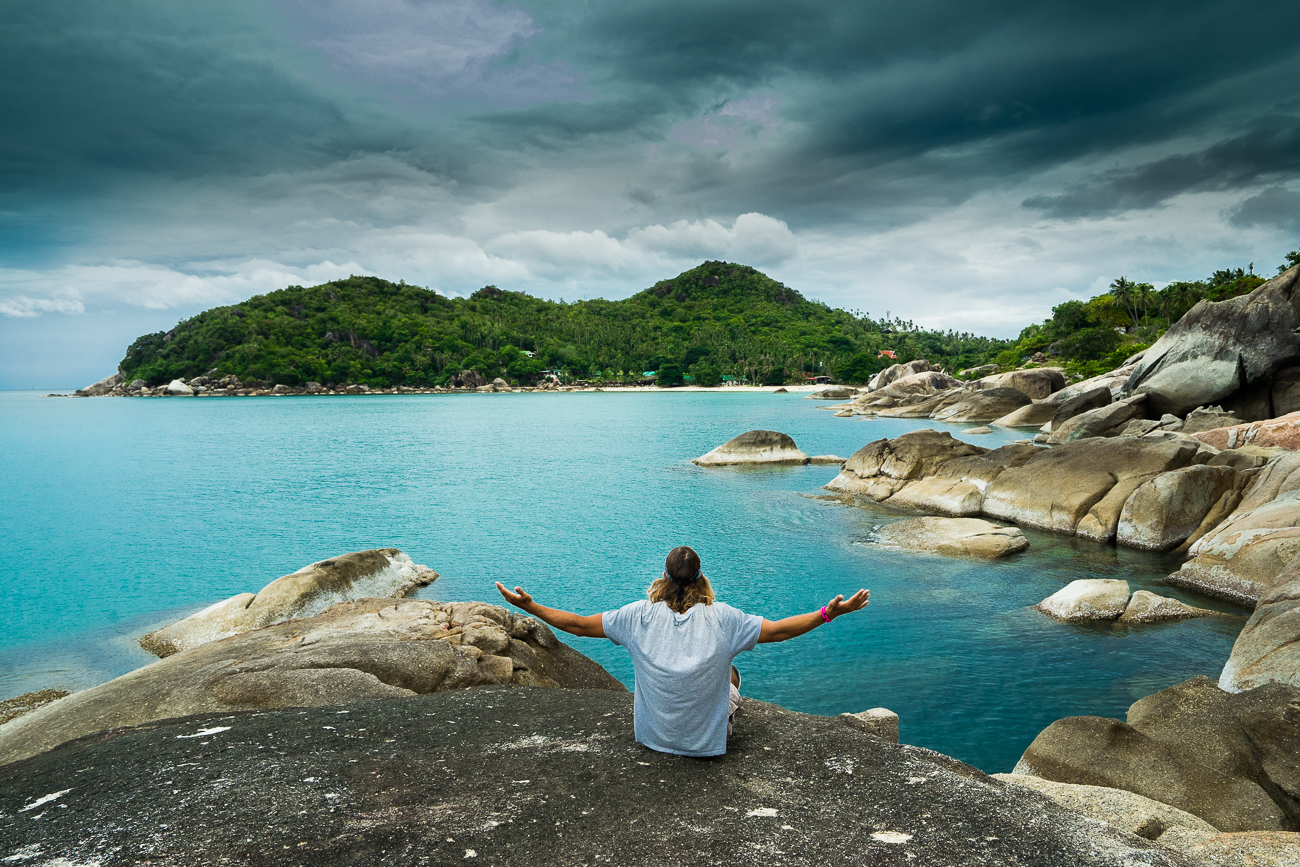 Just south of The Kala Samui is an open space where there is no building. A dilapidated barbed wire fence runs across the area. I stepped underneath the fence and a path led down to a beautiful viewpoint. The beach below was littered with amazing rock formations as is so common on this island. This was one of the best views on Koh Samui and I had stumbled upon it by chance. 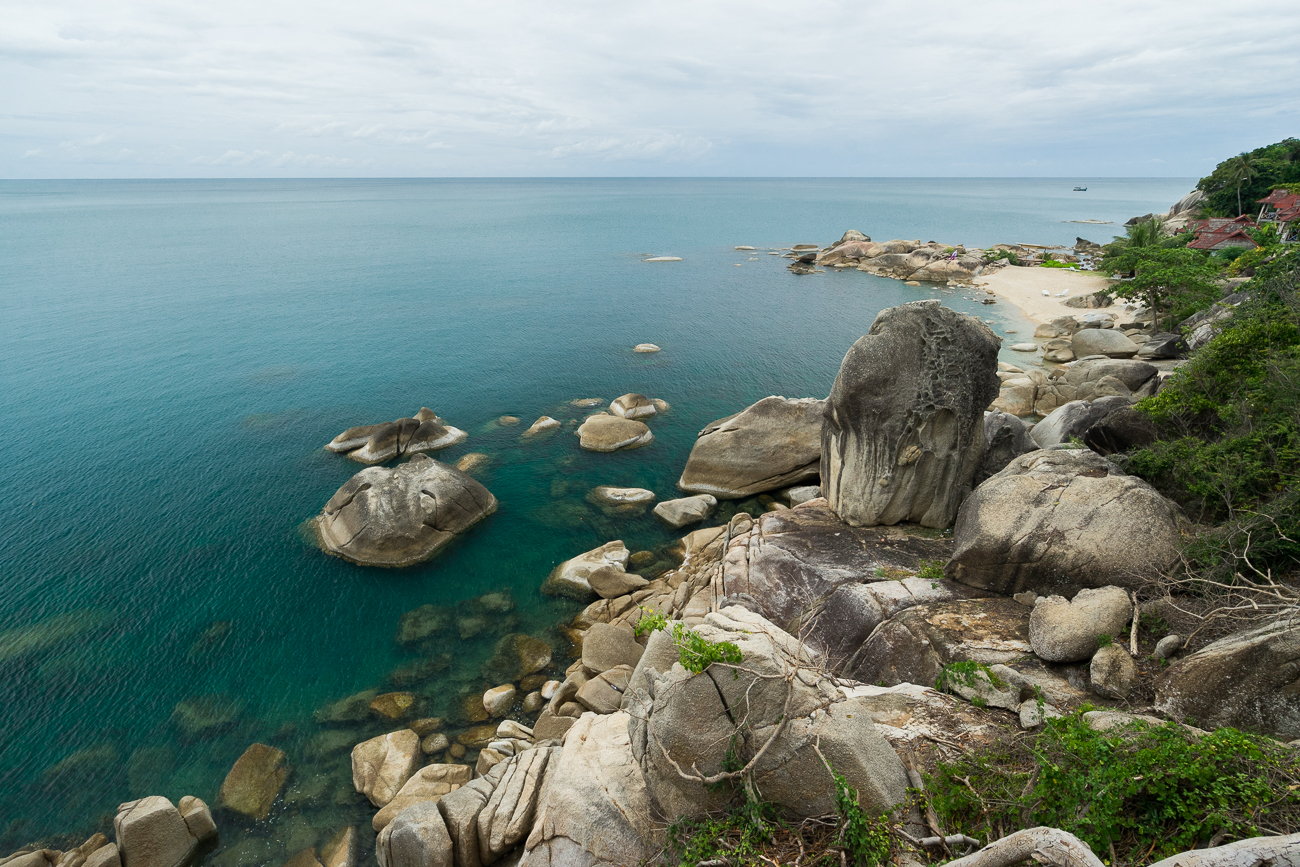 Happy exploring! Hope you get some great views, great weather and maybe watch a storm roll in across the ocean! If you also get to Ko Lanta here is the guide I wrote: Ko Lanta what to do

Brilliant article and such a great topic. Thanks for sharing. I am doing the research before I was the first time to Samui this year, and I have tried to visit all 12 mentioned Viewpoints for a nice year Calendar Shot. Beautiful places. Every single viewpoint has a different kind of charming and unbelievable surroundings. On my trip, i saw many different signs of temple and pagodas and was looking too, for a nice guideline. I have been by motorbike around to be more flexible in the hills and in the funny traffic. https://properties-away.com offers a really good travel guide where waterfalls, temples, secret places, and more are shown. Worth a look and a visit :-) Unfortunately, I made the mistake and travel to early to Ko Tao, where nothing really was to explore, and from there I continue to travel back to Bangkok. Hopefully, I can come back this year again. So long, stay safe, and have a nice day. Cheers Andrew

We love Koh Samui and seeing your amazing photos has brought back so many happy memories! It has been a few years since we visited Koh Samui but reading your blog has inspired me to book some flights and make a return trip.