This week our Hanoi travel adventures have been all about chasing sunsets, checking out the top tourist sites, and enjoying some authentic vietnamese cuisine!

Exploring Hanoi, Vietnam this past week has been so much fun! While we are usually more known to chase after beaches and forests rather than the bustling city, we have been enjoying this exciting concrete jungle of Vietnam’s capitol city.

This week we’ve witnessed a few incredible sunsets in some amazing spots! Our first sunset was 26 floors above the busy streets, at the recently opened Trill Rooftop Cafe. We arrived about an hour before sunset and enjoyed some drinks. Hanoi has a population of almost nine million people, more than New York. There is no better way to understand the size of a city than by getting up high and enjoying a 360 degree view. Later in the week we went to another rooftop cafe called Skyline Hanoi. It was at the top of a hotel in the Old Quarter and offered incredible views of Ho Kiem lake and the busy streets of the historic region. This rooftop restaurant was definitely upmarket but in Vietnam that is still very affordable. Beers were $3 USD compared to 50c on the street. You definitely pay for the view but it is definitely a spot we would recommend to anyone visiting Hanoi. 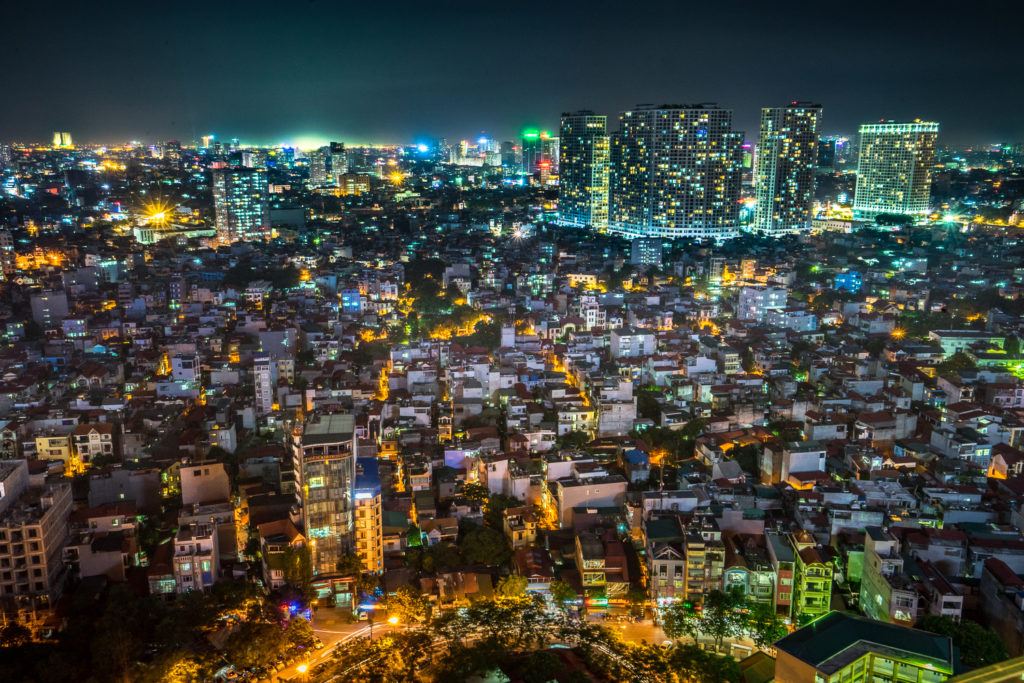 OUR RUN IN WITH A ROOFTOP SECURITY GUARD

For the sunset on our second night we decided to get away from the Old Quarter and head to the 32nd floor of an Ha Do Parkview apartment complex. After a day of work, we grabbed some dinner and hired an Uber to take us the 30 minutes to the suburbs where the building is located. Upon entering the building, the doorman nicely let us up to the 32nd floor, where we took the door out to the rooftop. We walked around in awe of the incredible view and took a few photos. As we were waiting around for the sun to set, a security guard who didn’t speak any english came up and motioned for us to come with him. The worst case scenarios flashed through my mind of being imprisoned in a foreign country as we followed him and rode the elevator down 32 floors in silence. Then at the bottom he just waved us out and walked away. Thank goodness!

WHY YOU SHOULD UBER IN VIETNAM

We have used uber more in this last week in Vietnam then we have ever before. The driving and traffic here is insane. We have literally watched people drive straight towards each other then veer to the side at the absolute last moment. It’s like a constant game of chicken. As you walk down streets and alleys there are constant horns blaring to let you know that either you need to get out of the way or someone near you does. While it’s possible and even common for travelers to drive mopeds in Bali, the driving here is on a whole other level.
It is for this reason, and the fact that uber rides are mere pocket change, that we either walk or uber everywhere we go. A 20 minute uber ride cost us $2.80USD, which we found incredible. Even cheaper is Uber Moto, which pretty much involves you riding on the back of a moped and holding on for dear life.

FITNESS ON THE GO

When you are walking everywhere and always on the go trying to see as much of a new place as possible, it’s easy to let working out and staying healthy take a back seat to traveling. However we’ve found that working out is a great way to see more of the city and also have some sense of routine in an otherwise hectic lifestyle. While we’ve been doing a lot more walking than normal, we’ve also decided to get back into running. Only 20 minutes from our apartment is the famous Hoan Kiem Lake. one lap around the lake is a mile, so we’ve been getting in lots of runs there. In addition to our runs, I’ve been doing longer sessions of daily yoga as I get ready for my upcoming yoga teacher training!! I’ve gotta admit it’s pretty nice to have enough space to do yoga at home again! Also while we were in the suburbs (after we got escorted off the rooftop), Jackson was able to find a pickup game of soccer in a local park! 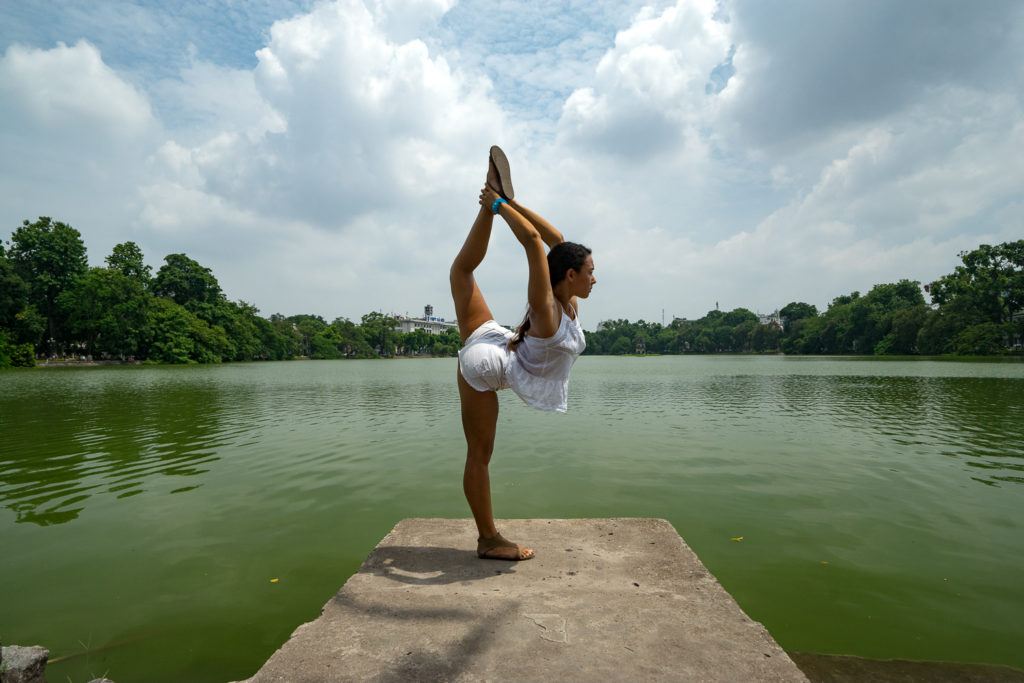 In between the work, sunsets, and working out, we’ve also made a point to go check out a few of the sights. While we’ve incorporated Haon Kiem Lake into our workout regime, we also decided to check out the Ngoc Son temple. For 30,000 dong you can explore the little temple in the middle of the lake. Luckily for us, we still have our student ID cards from university so we got ½ off! If you still have your student identification card it can save you money on some transport and a number of sightseeing activities. We also wandered over to Dong Xuan market- the largest covered market in Hanoi- and were greeted with the craziest shopping experience ever. There were so many smells and sounds and it was awesome but totally overwhelming at the same time.
Later that night we went back to the night market and went back to our favorite spot Chago Tea & Cafe where I get green tea with extra boba and Jackson gets sugarcane juice The guy who makes the sugar cane juice had Jackson take a couple shots of vodka with the juice last time while giving him some basic vietnamese lessons.

This week has been so much fun! We’ve visited some really amazing places, had a lot of laughs, and even gone to a few different super yummy restaurants with vegan options such as Jalus Vegan Kitchen, Zenith Yoga ll Cafe, and The Hanoi Social Club! We’ve also gotten our first taste of the rainy season. Finally our rain jackets are getting some use!

As we head into this next week, Jackson is getting ready to head back to Indonesia for a press trip while I continue to explore Vietnam!

Don’t be shy! Comment or email us if you have any suggestions on places that I shouldn’t miss around the Hanoi area! All ideas are appreciated 🙂

Click here to see what we got up to last week in our final days in Bali!