You have either just bought a Sony a7ii or have been enjoying yours for a while like myself. I have slowly been adding accessories to improve the performance and to protect my camera from scratches, water, and mishaps. The following list is a comprehensive guide to the best Sony a7ii accessories available in 2019. If you have any accessories you use that aren’t on this list add it to the comments so we can consider adding it to our camera bag!

The first thing you want to do is protect your Sony a7ii from bumps, drops and mishaps. I made the mistake of not buying one at first and my camera is all banged up now. It still works but would be impossible to resell and could lead to issues in performance later. There are a few different types of cases available. I like to look for the most practical. There’s nothing worse than having to unpack the camera every time you want to take a photo like many bulky cases. I recently purchased a silicon case on Amazon for $18. I wanted something that didn’t affect my ability to shoot, I didn’t have to unpack and could stay on the camera 24/7 and wouldn’t increase the size too much. 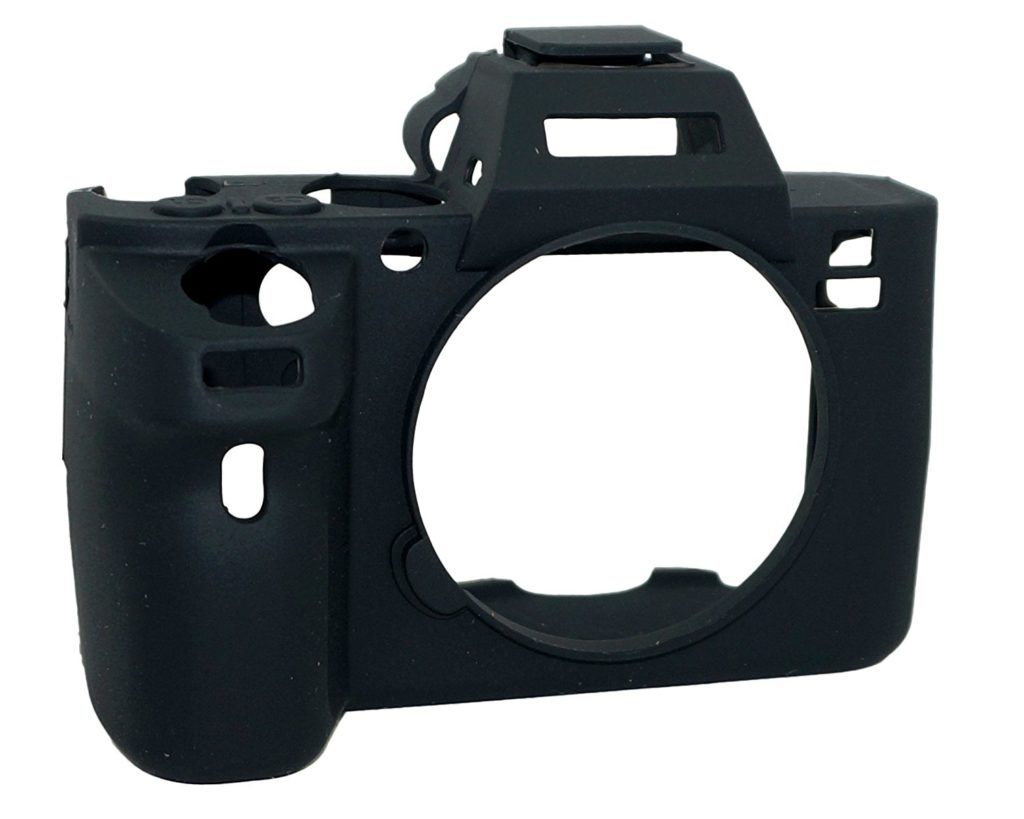 Other Sony a7ii case options are a neoprene full cover case. This means you will have to unpack the camera each time you use it but it does give you full protection with the neoprene soft cushioning. It is a great way to give it extra padding and protection inside of a bag, backpack or luggage. 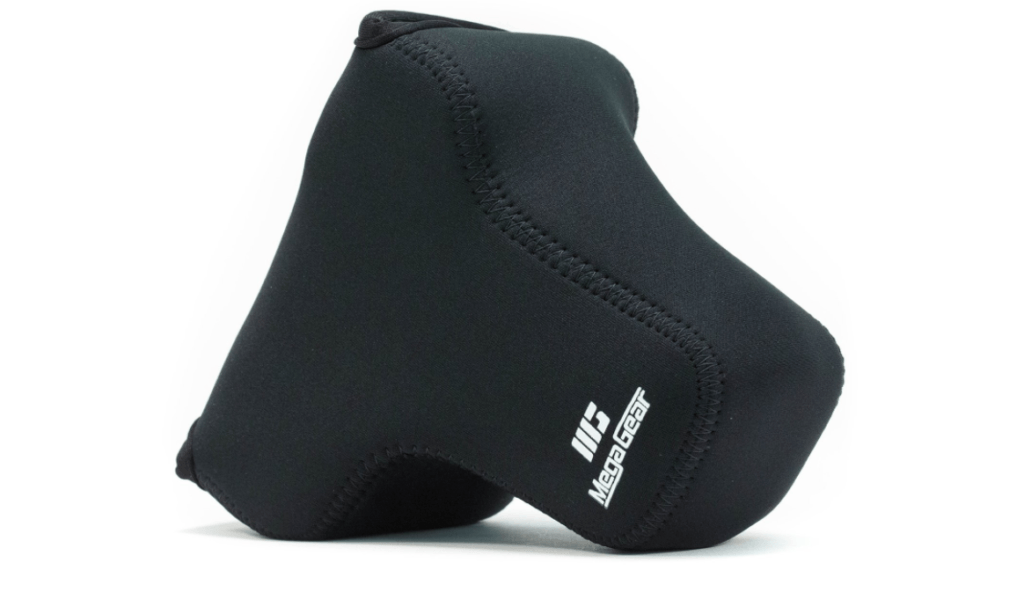 The two options above are both quite practical but if you want a Sony a7ii case to protect your camera but also looks stylish you should check out a Sony a7ii leather case. The leather cases available come in two different designs. One style protects only the bottom of the camera and doesn’t need to be removed to begin shooting. Although the case covering the lens can be unclipped quite quickly as you can see below. The other design covers the whole camera and needs to be removed similar to the neoprene Sony a7ii case above. I thought about buying one of these to up my style game but I preferred the slightly less stylish but slimmer silicon case. 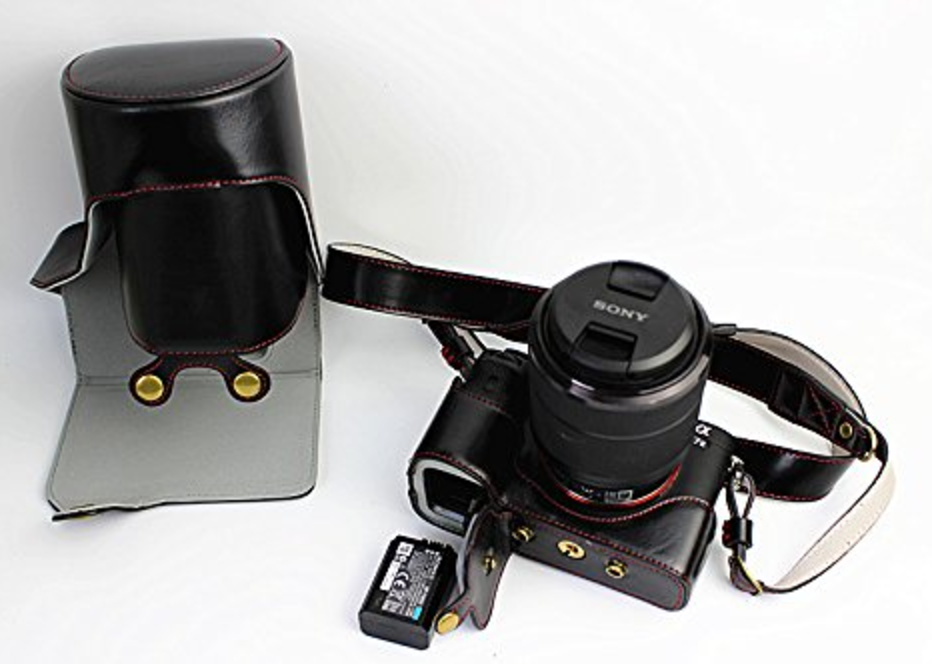 The size and type of bag you need depend on where you are going and what else you need to carry. There’s one product I stand by and have used it for over two years, which as far as I have searched is the best on the market. It is the camera bag I have been traveling the world with for two years straight! Here’s why my Victoria Tourist camera/laptop backpack is unbeatable.

There is nothing else like it if you need a rainproof, padded camera bag, which can also hold a MacBook and have room for all of your electronics and cords. If you find one please tell me about it.  I use this Victoria Tourist camera bag with a heavy load of gear inside and it survives without any issues, which is why I recommend it as the best Sony a7ii camera bag. 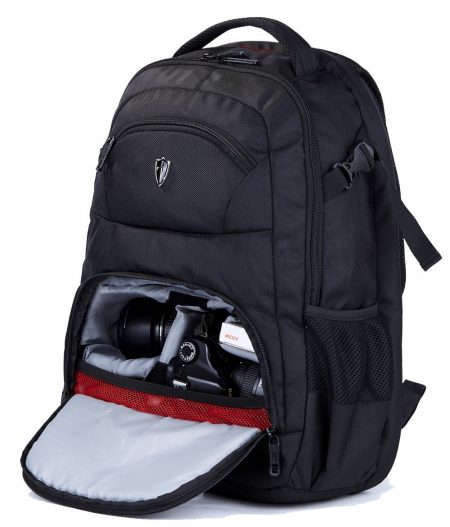 The Sony a7ii has so many awesome features but the screen durability is not one of them. Over time the layer on top of the screen slowly fades and peels away from scratches and use. It doesn’t affect the performance of the camera but it can affect the quality of the image being shown on your screen. The Lamor range does an awesome job of protecting your screen and I suggest going with the Lamor LCD Sony a7ii screen protector. While it is often overlooked a screen protector is one of the most valuable Sony a7ii accessories for probably the most vulnerable component of the camera. 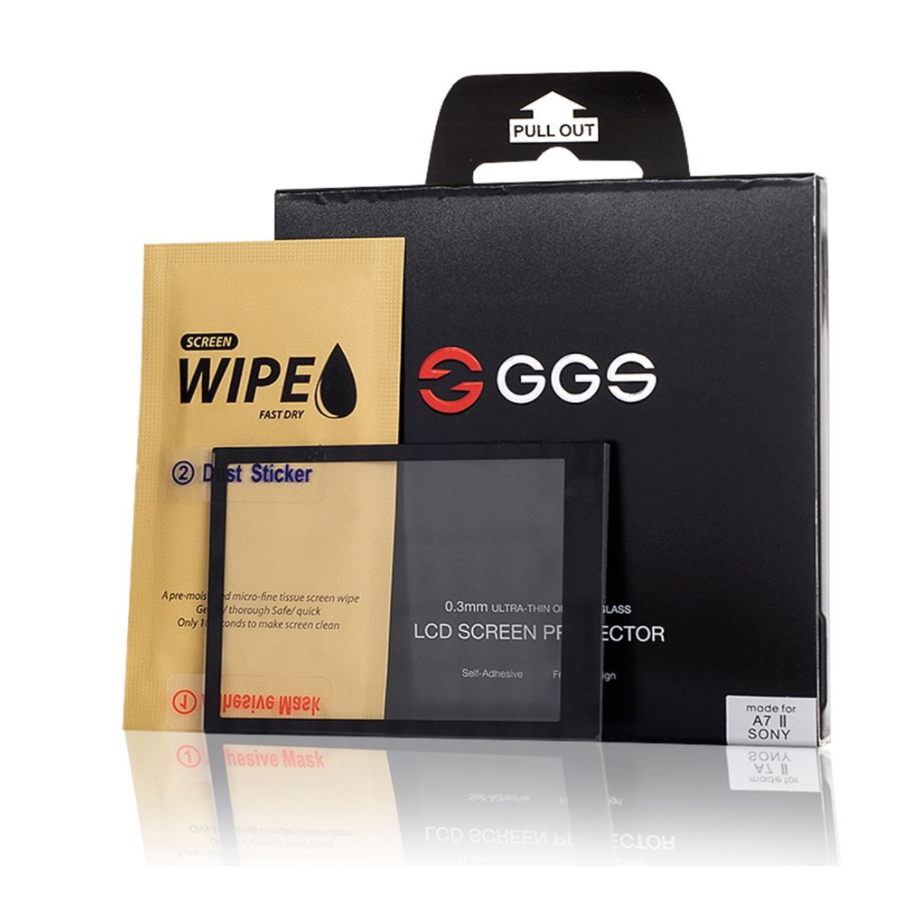 The Sony a7ii is a great camera but it can be difficult to use Sony a7ii accessories or even tripods because of it’s size. That’s why you might need to consider the use of a cage. There are a number of Sony a7ii cage options but the most popular value pick on Amazon is the Neewer Aluminium Alloy Film Movie Making Camera Video Cage. This Sony a7ii cage comes with a quick release plate. All you need to do is attach or screw into the cage itself, and then it goes into a base that is attached to the rods. The camera attaches to the cage by the standard 1/4″-20 screw-in hole using a screw of that same size, that the cage itself has. This is one of those Sony a7ii accessories which can really take your film quality to the next level for under $100. 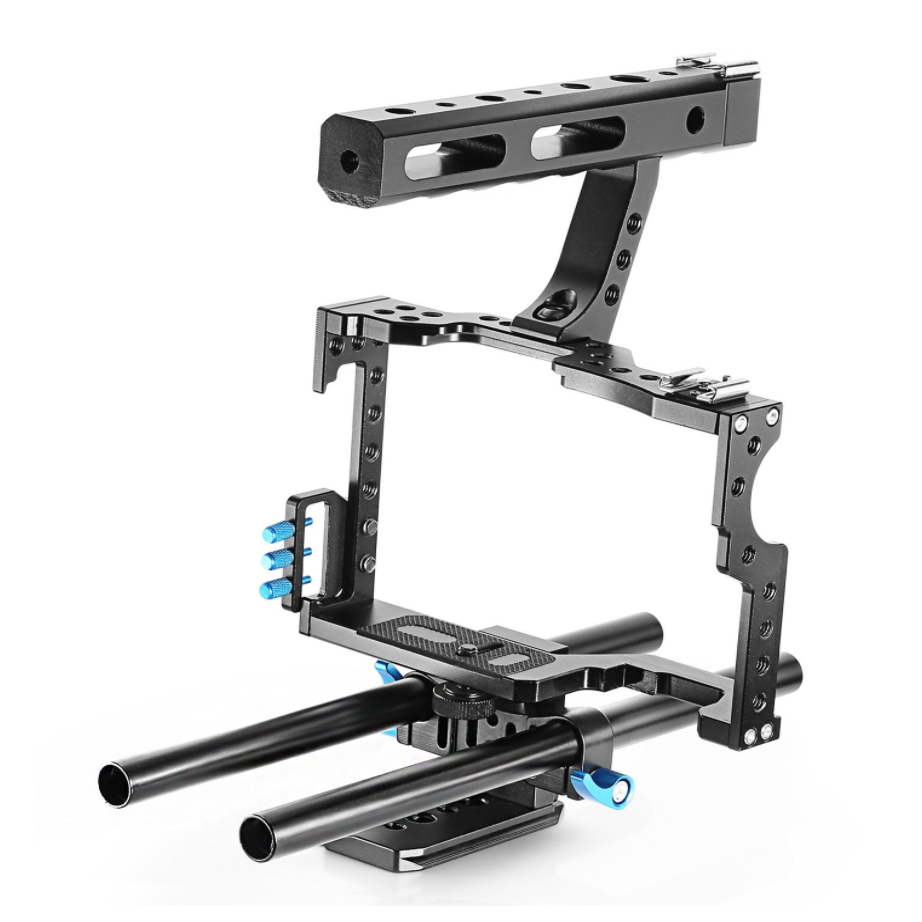 Battery life is one area where traditional DSLR cameras outperform mirrorless cameras. However, it doesn’t really change too much about how you shoot. If I shoot all day on my Sony a7ii or a6000 I will usually go through two batteries while those with DSLR cameras might use one. As I travel I carry four batteries with me and I’ve never run out of all batteries. I have a dual-charger which operates from a USB cord. This is important for traveling as it means I can charge batteries from a power bank or a MacBook while I’m on a boat, bus or plane. I use a Wasabi Dual battery charger. It comes with two batteries and the charger and it plugs in via USB. TIP: Brand name batteries cost triple than generic brands and last just as long as the Amazon options. There really is no reason to buy a Sony a7ii battery charger from Sony themselves.

You have a few options when it comes to batteries. Although I am perfectly happy with my generic batteries some people swear by the brand name Sony a7ii batteries saying they last longer. However, from my experience having owned both the Sony a7ii batteries and the Wasabi batteries, there is no way I would pay double the price for something that is so similar in performance. I received my two Wasabi Batteries, which came with the dual charger as I mentioned above and they are still going strong 1.5 years later. 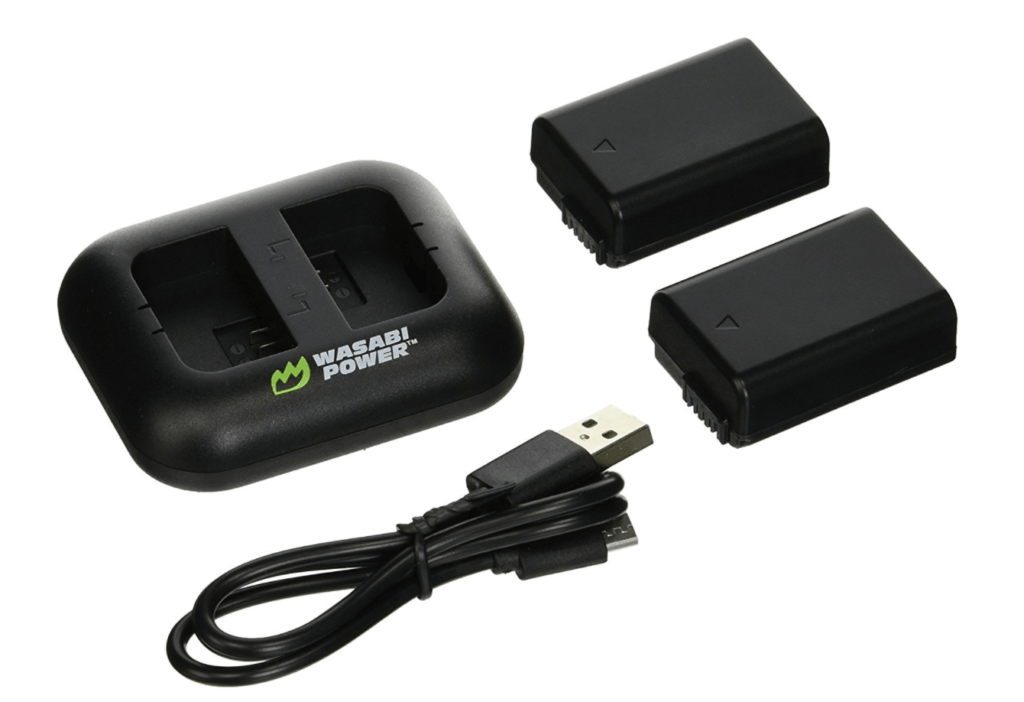 There are many different Sony a7ii grips available. You can get a grip made from bamboo, leather or silicon. However, the most popular grip is the battery grip which gives your camera some extra size and maneuverability while also giving your Sony a7ii double the battery life. This is incredibly handy considering the batteries aren’t known for lasting a whole day. There are a few Sony a7ii grips on Amazon but by far the best value for money is the Mieke Mk-a7ii Pro Built-In 2.4g Wireless Battery with Remote Controller. 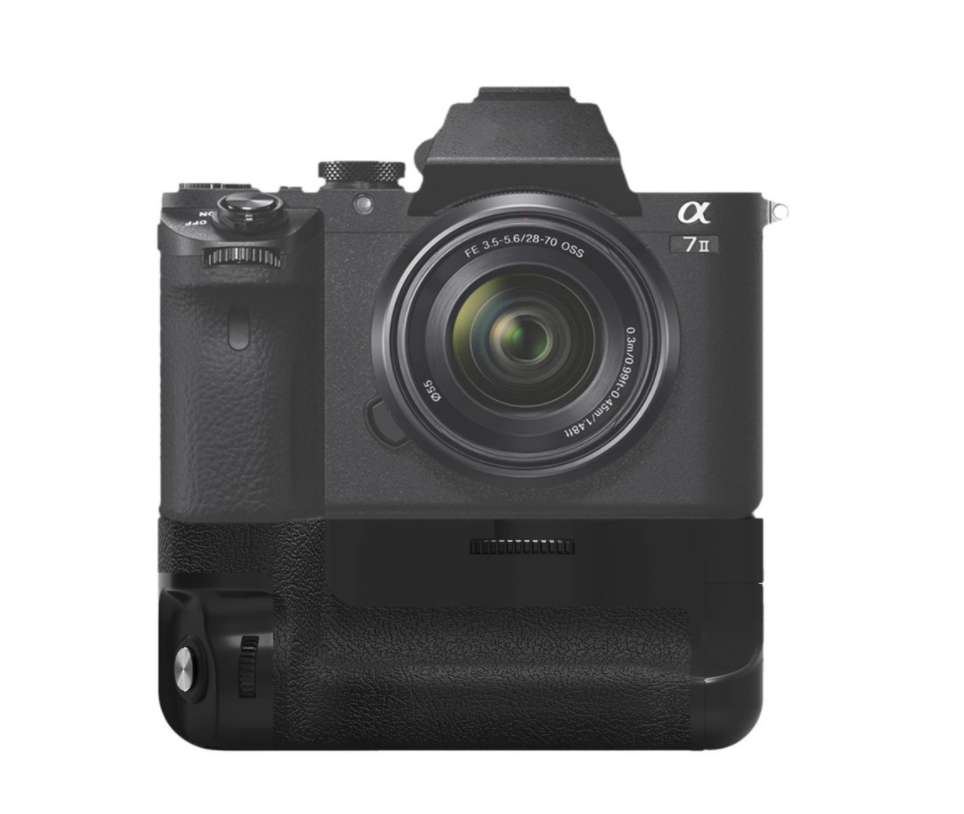 The Sony a7ii is capable of getting under the surface with this Meikon underwater housing. I have personally watched people shoot with it and it does outperform the GoPro but it can be a little bit fiddly. The case can go as deep as you can swim. The downside to the case is that it only fits the kit lens 28-70mm. Nonetheless, if you are in the water a lot and want to up your game and have more control than the GoPro affords, this housing could help you create some awesome shots. It’s also far less expensive than big DSLR housings made for shore-break surf, making it an affordable addition to your Sony a7ii accessories collection. 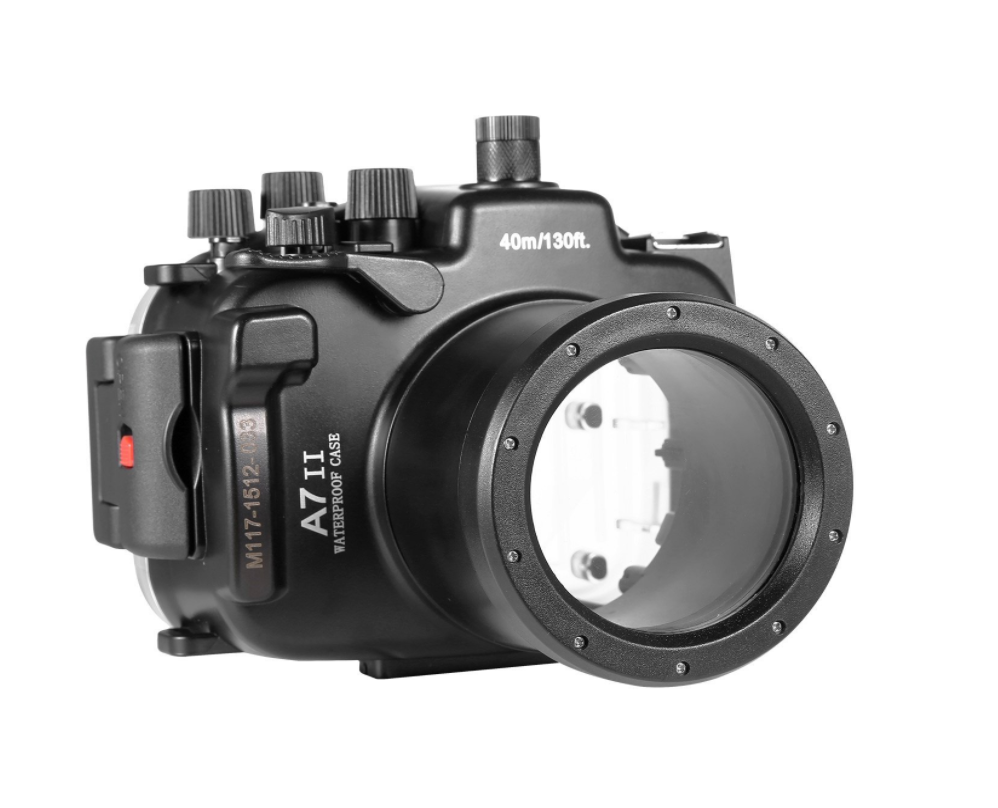 If you have any other cool Sony a7ii accessories you think we should all know about leave a comment below!

As an Amazon Associate, I earn from qualifying purchases