I’ve put off writing this edition of the Weekly for a few days too many. I just didn’t want to rush writing about such an incredible week. Project Lombok was everything I had hoped it would be.

Project Lombok is a week where each of the participants paid a fee of $1500 USD to be on the adventure tour. 100% of that fee went to building two much-needed pop-up schools in the earthquake-devastated region of north Lombok. It’s something I had worked incredibly hard on and the time had finally arrived to meet the crew at the Bangsal Harbor.

You never know how things will go on a group trip. There are so many questions about the type of people you will have involved and how the different elements of the week will pan out. Luckily from the first moment at Bangsal Port, the group clicked and we never looked back.

At that stage in Bangsal Port, as strangers, we loaded our gear into the vans and set off for the 2-hour journey to Senaru. After checking into our homestay we went for a short walk down to Sendang Gile Waterfall to refresh ourselves. Tiu Kelep was closed after two Malaysians died in a landslide in the canyon during the last earthquake a month prior. 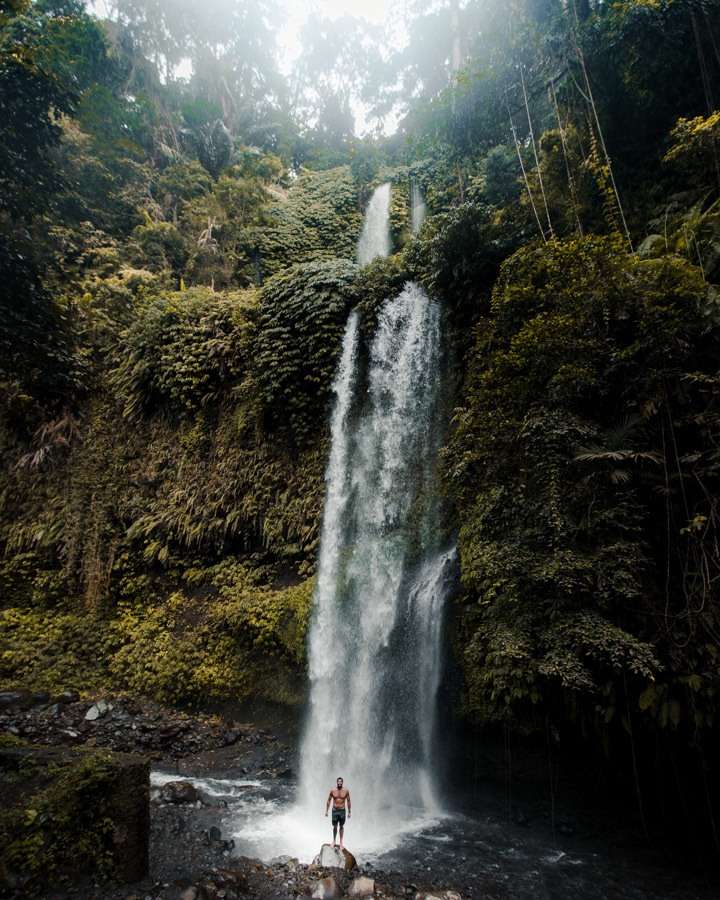 The next morning we set off for our trek up to Senaru Crater Rim, which was to be the highlight activity for the week. It’s a steep, grueling trek up through the jungle before it eventually spits you at at the crater rim. Here you can see inside the volcanic crater and to the summit of Rinjani. It was a challenge for our group but one they reveled in. We were gifted with perfect weather conditions. Reaching the summit after the tough hike brought the group together and really set the tone for the week. The sunset above the clouds was one of the most amazing sunsets I can remember in a long while.

We camped at the summit and enjoyed a quietly beautiful sunrise the following morning as the light slowly crept into the crater. With slightly heavier legs than the previous morning, we made our way back down to Senaru. 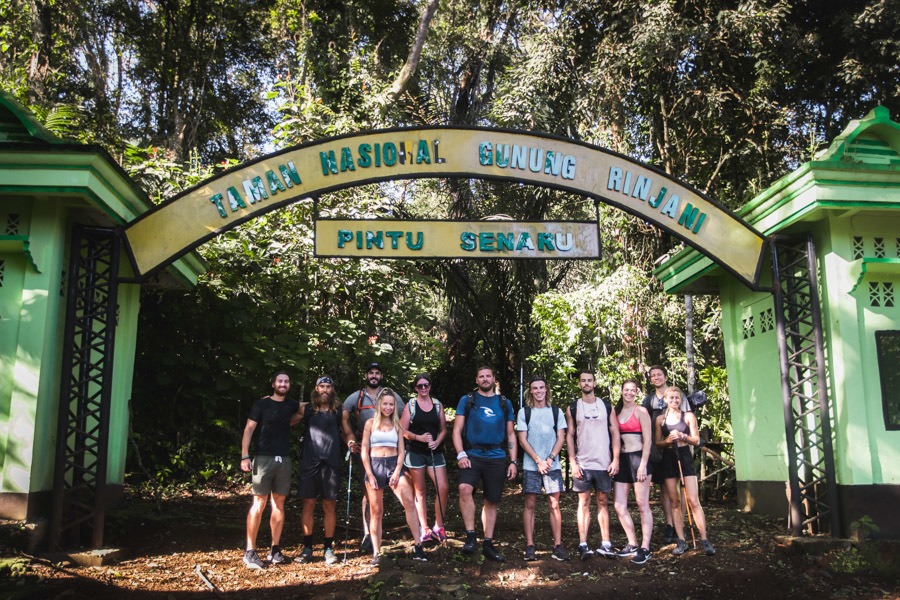 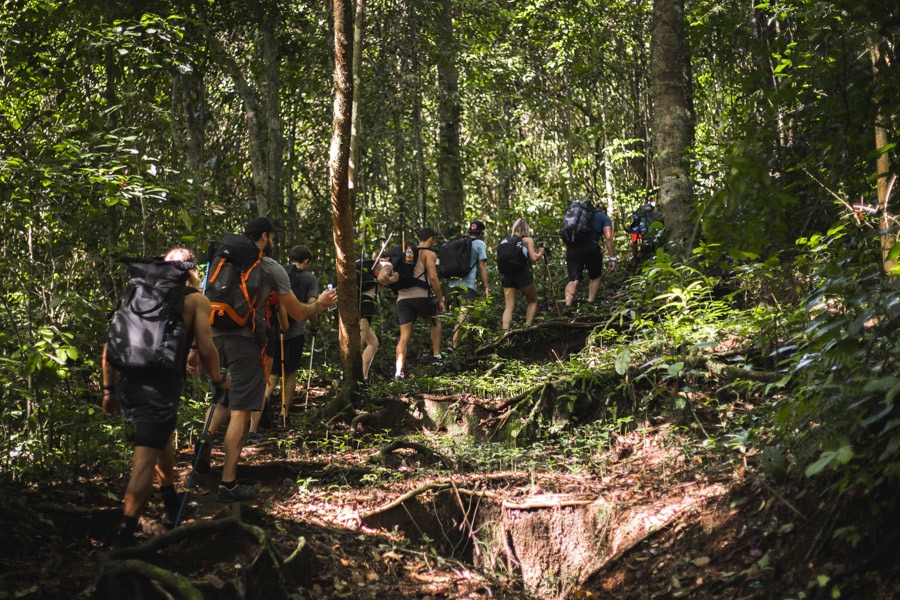 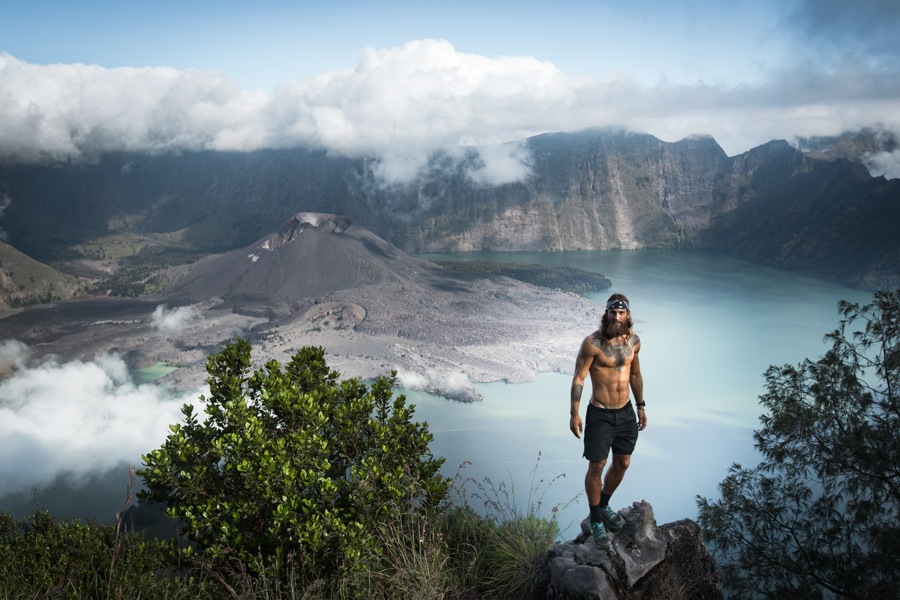 On day three we headed down to a secret little black sand beach, hoping that the magical warm waters of Lombok would heal our aching legs. It helped but it wasn’t the cure we were after. 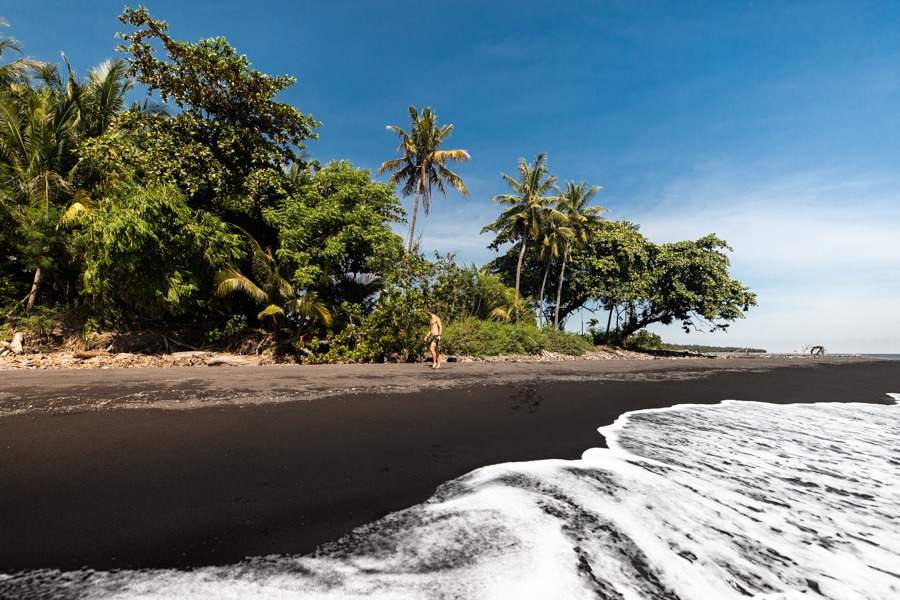 We would be needing to make it through another tough hike that afternoon as we tackled Pergasingan Hill. The 2.5-hour trek was another heavy-incline hike to a camping spot above the clouds. The trail leads you through the jungle and then winds amidst long, head-high gross on the ridge before you reach the top of the mountain with views over the valley. However, when we arrived we were inside the clouds and it stayed that way for the whole night. We didn’t mind as the group got to know each other around the campfire with some truly bizarre (and scary) stories and anecdotes from our past travels and adventures.

At sunrise, the clouds had left and we were again handed perfect conditions from the weather gods. It was an incredible sunset as the patchwork fields below created a beautiful scene amidst the steep ridges of the mountains. 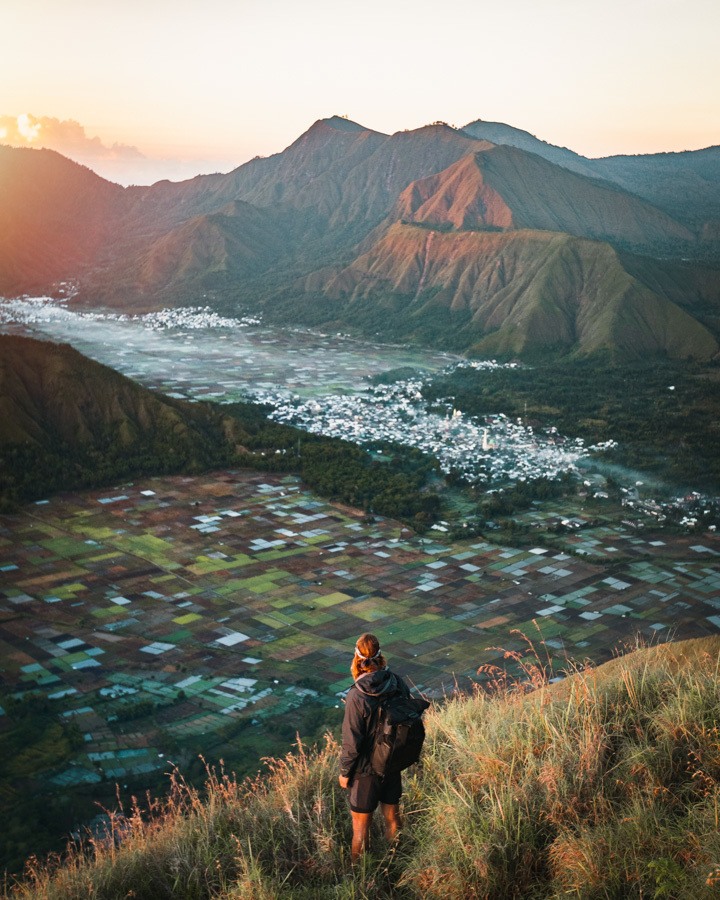 The group made the trek down but there was no time to rest, we piled into the van and headed 2-hours towards the beautiful waterfalls of Benang Stokel. By this stage, our legs were really feeling it so hundreds of stairs weren’t welcome but we attacked them anyway. A shower beneath the waterfalls was well over-due and I think Gusti, our van driver, appreciated us returning to the van a little fresher than when we had come down from Pergasingan Hill. We made the final journey down to the south where we would stay for the final four nights of the trip. 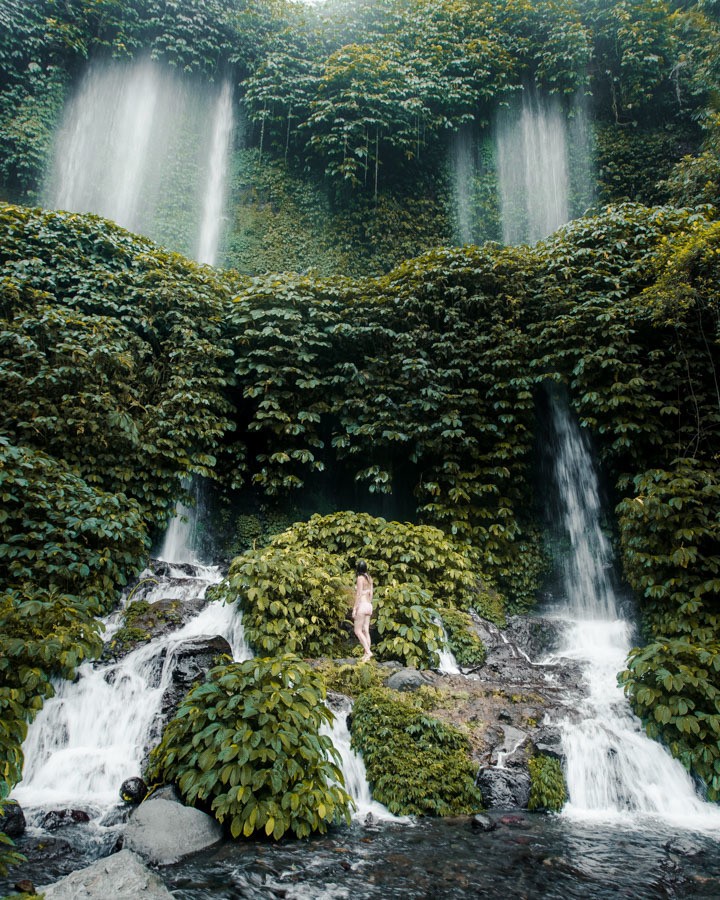 It was meant to be a rest day now but in true Project Lombok fashion, we were off to go paragliding at 9am. It was a first for most of the group and actually much more relaxing than we had imagined. We drove up to the hill all piled into the back of a pick-up truck and I remember thinking two things. a) I really should have remembered to print the liability waivers and b) who else runs trips where the whole crew is bouncing around in the back of a truck up to a random hill to go paragliding! 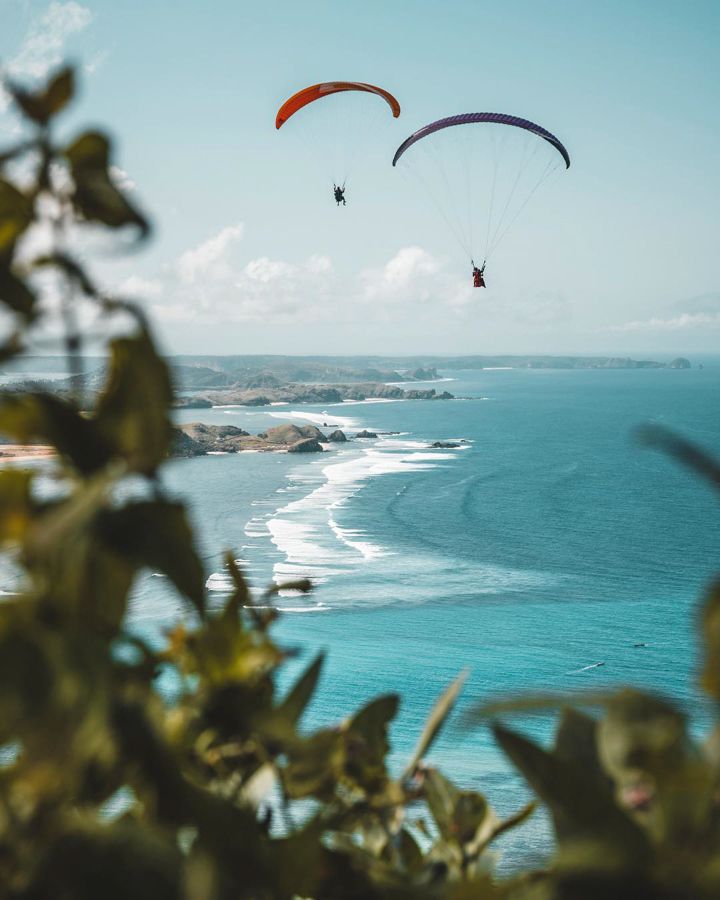 After the paragliding, we headed out for a beach session at Tanjung Aan when some of the group (apparently not tired still) headed out for a surf. We followed that session up with an epic sunset on Bukit Merese, the best viewpoint in South Lombok. 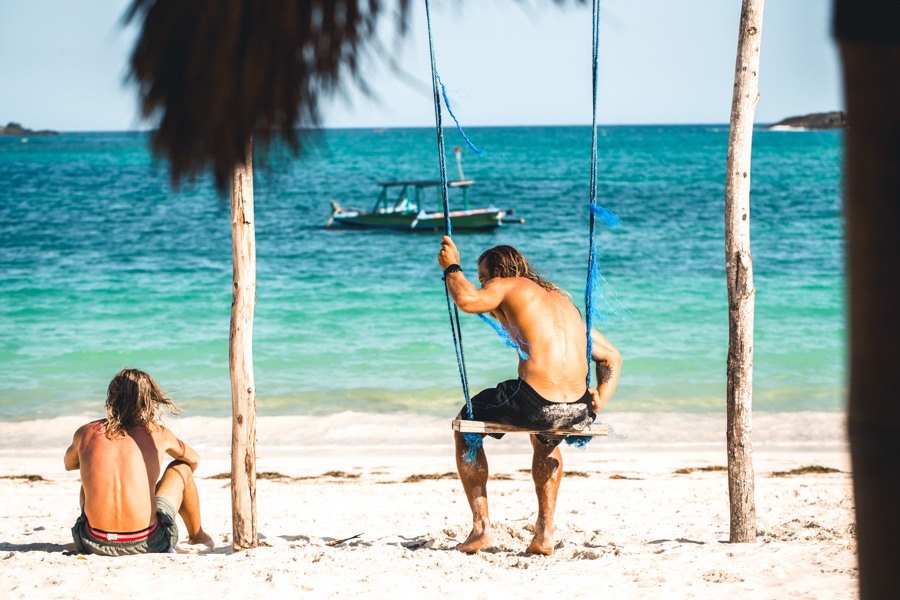 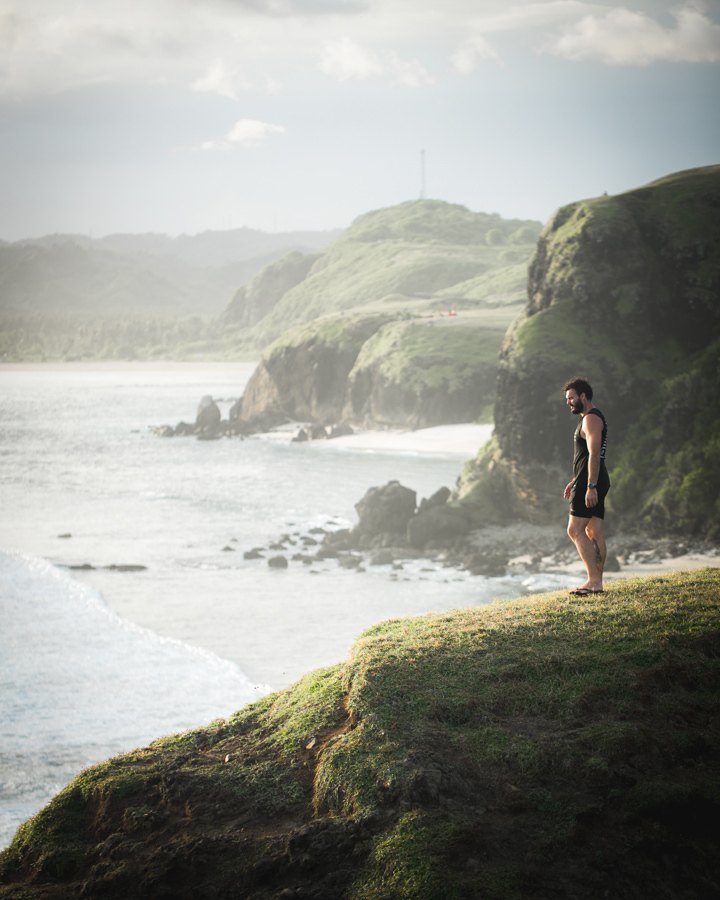 Our final fay in South Kuta was actually going to be spent 1.5 hours away, island hopping in the Secret Gilis. This was a really great day as the Classroom Of Hope team joined us. We spent the day snorkeling, exploring and taking a bit of a breather. Duncan and Nicola had a really nice speech at lunch on one of the islands and the entire group was in a really good place. We were all quite excited about the school visits and openings the following day. 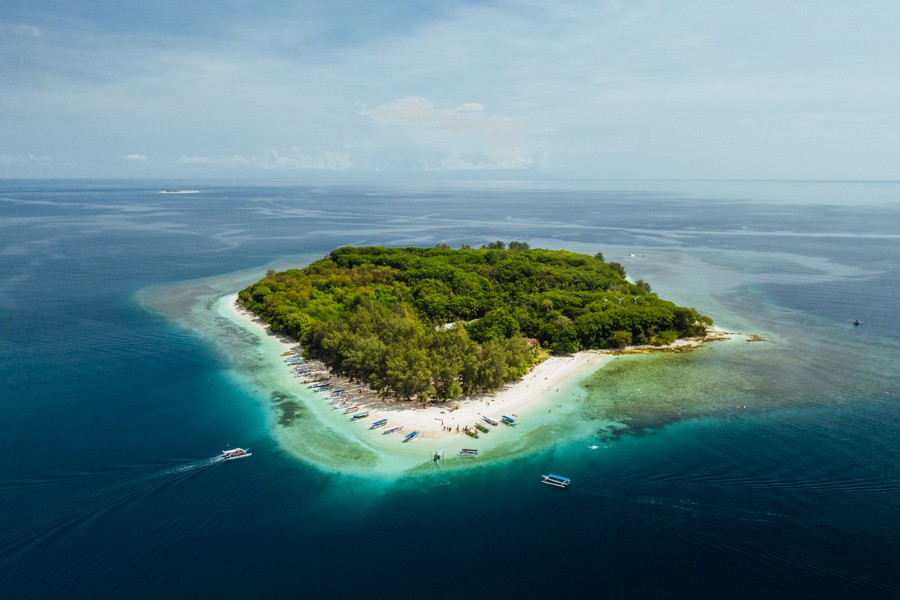 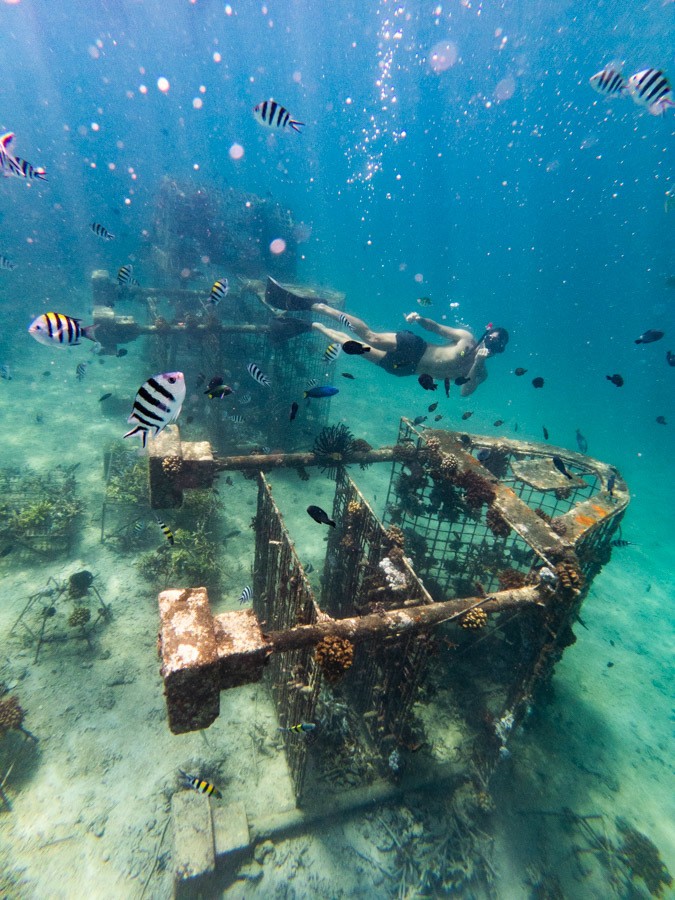 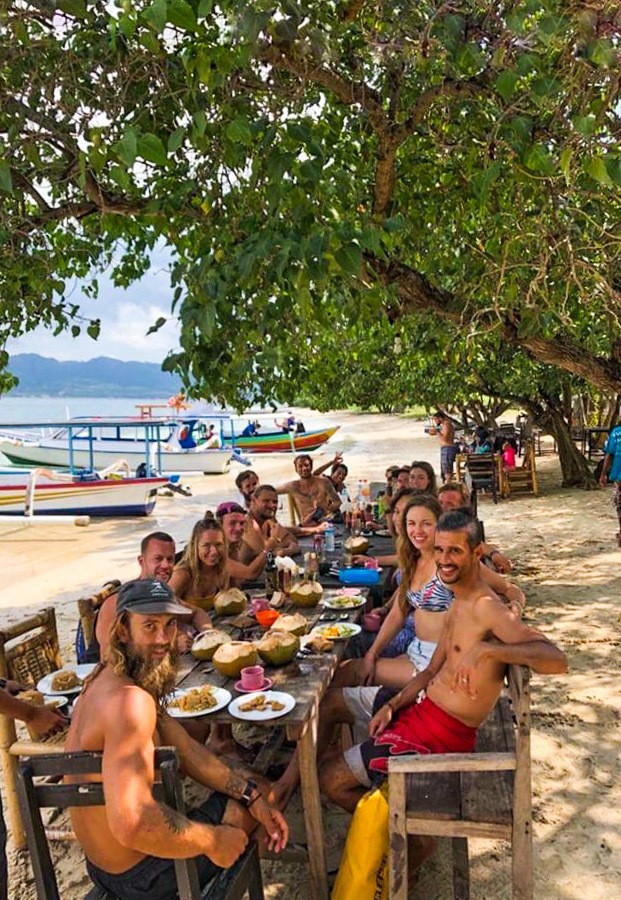 After seven days of adventuring, the eights day had finally arrived. We would drive 2-hours up north to Mekar Sari community and officially open the pop-up school. The old school was destroyed in the earthquakes and with only motorbike access to the school, the government is taking a minimum of 2-3 years to re-build the permanent structure. It was an incredible moment to see the smiles on the kid’s faces as they ran towards their new classrooms. Hearing the headmaster talk about the spirit of the community being strong because of the school was also a beautiful moment.

We also visited Jenggala, the second school our trip had funded and met the children there who had now been using their pop-up school for over a month. Both communities were incredibly thankful and it was an amazing day to see all the hard work in it’s physical form.

This was a brief recap of our week but Nic is currently working on the video highlights, which I’m sure will capture the emotions of the week, far better than my words.

Thanks so much to Pelita Foundation, Classroom of Hope, Lombok and of course the awesome crew that believed in my idea and joined me on this epic tour of Lombok.

I was very interested to learn a little more about the Lombok Project. You are a talented writer, and I have been following your blog for a long time. You have inspired me to create my travel blog, and I hope that it will become as popular as yours.

Is it possible to trek all the way to the summit again? We heard that it was still closed after the earthquake

Thank you so much for sharing great post very detailed explanation about competitor Keyword and learned somethings new.