The Pacaya Volcano Hike or Volcan de Pacaya in Spanish is a short trek to an active, lava-spitting volcano in Antigua, Guatemala. In this guide, I’ll share with you all of the details about the Pacaya Volcano Hike including the location, gear you need, how to book a tour, and the photos and review of my experience.

The total elevation gain for the hike is 1,496ft or 455 meters. It was pretty steep at times and the terrain was a little slippery so, over such a short distance, this hike will feel quite steep and be a challenge for many hikers. 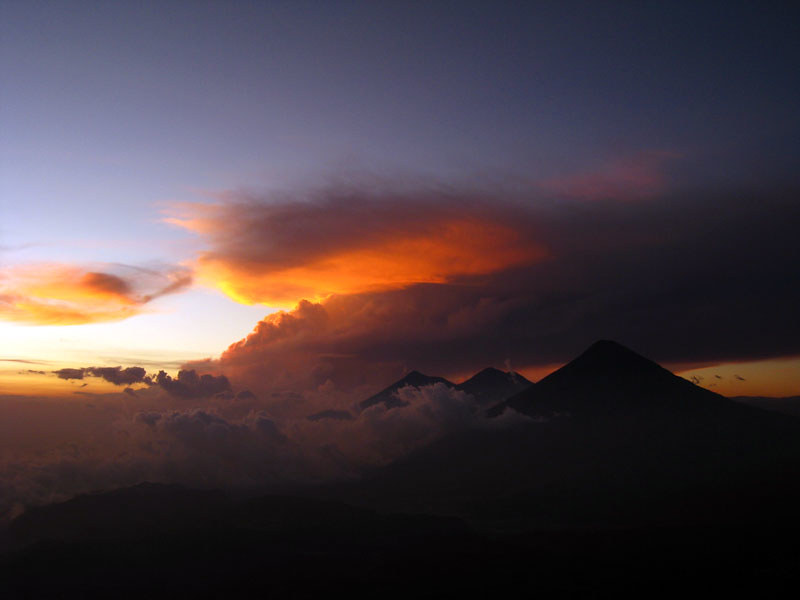 The total distance of the hike is 3.2 miles round-trip. It’s an out-and-back route so you head up for 1.6 miles and then back down the same way.

This is a short and sharp hike. For some, it will be a good little challenge and for others, it will be the hardest thing they do all year. The main reason it is a difficult hike is due to the intense incline. Over just 1.6 miles, you will climb almost 500m of incline. This is very steep and will catch a lot of people out while testing their fitness. The terrain also isn’t perfect but the main factor to consider is the angle of the incline. 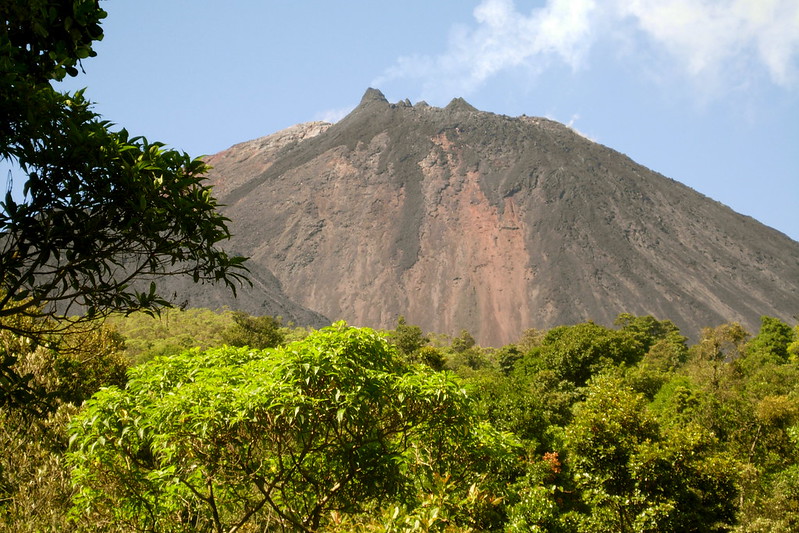 HOLD UP! Are you sure you’re ready to start hiking and traveling? GET INSURED FIRST!

I’ve been using World Nomads and SafetyWing for the past 6 years. I’ve made successful claims with both and found them professional, helpful, and reliable but most importantly.. cheap! I trust them both. World Nomads is great for travel up to two months and SafetyWing is perfect for long-term travel.

To find out why I choose World Nomads and SafetyWing, check out my review: Best (Cheap) Travel Insurance or get a quote below.

Pacaya Volcano is an active complex volcano, first erupting 23,000 years ago. It has erupted approximately 23 times since recording began after the Spanish conquest of Guatemala. It has a peak of 2,552 meters. The volcano was dormant for 70 years but began aggressive eruptions in 1961. It’s common to see lava spitting from the volcano today with live eruptions becoming normality. 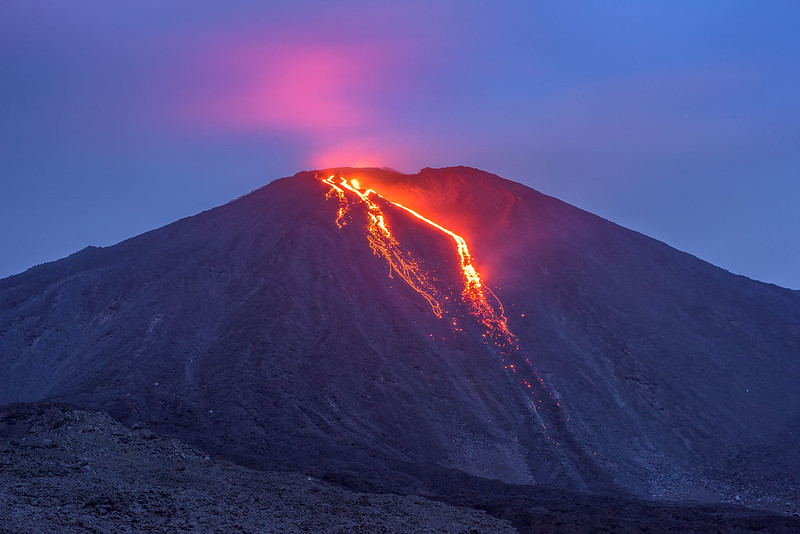 There are a few tours available but I found this one to be the most value for money. It includes pick-up and drop-off from your hotel in Antigua and an English-speaking tour guide for the entire trip. 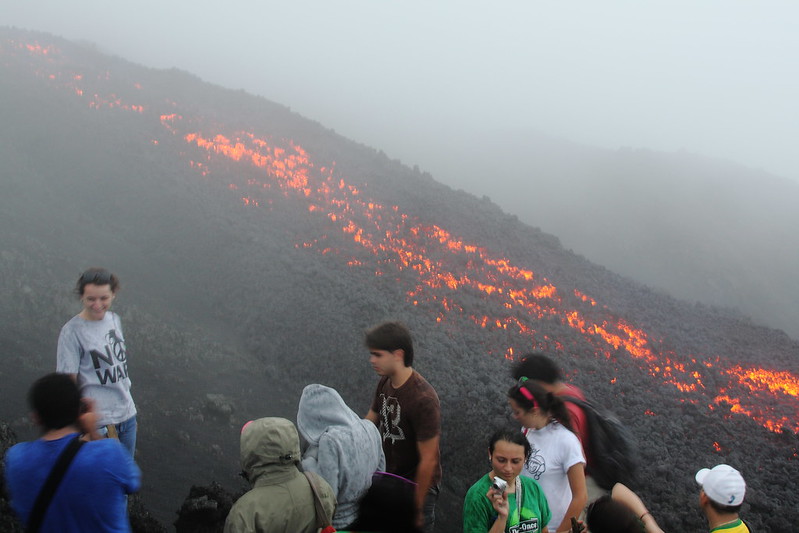 MY EXPERIENCE ON THE PACAYA VOLCANO HIKE

I’ve stayed in a ton of hostels, some great some terrible. However, in Antigua, I managed to pick a winner.  Jorge the hostel owner invited me to join a trip with him and two hostel volunteers from the hostel for a sunrise mission on the Pacaya Volcano hike.

At 3 am in the morning, Jorge brewed us a pot of coffee to take to the summit of the Pacaya Volcano as we waited beside his car on the empty street. I have no pants or a jacket as I am usually in tropical locations so I shivered waiting to get into the backseat before we headed off for the Pacaya Volcano hike.

We drove for almost 1.5 hours through neighborhoods and along highways. Jorge set a few records and we even went airborne on one occasion, catapulted by a hidden speed bump.

We arrived at the parking lot in darkness, the moon our only guidance. That was until the ever-prepared Jorge mounted his headlamp.

I managed to snap one photo of the lava but it was still in complete darkness and this is the best I could manage in an incredibly low light situation without a tripod.

Pacaya Volcano is active. Real active. After sleeping quietly for more than a century, it violently blew its lid in 1965. The Pacaya Volcano last erupted in 2010 and erupts roughly every 4-6 years. The remnants of the last eruption are spread far and wide. As you reach the base during the Pacaya Volcano hike, you are walking on lava rock. During the eruptions, this was a river of lava flowing into the valley at the foot of the volcano.

We kept a good pace as we clambered up the soft trail, which wound around the mountain next to Pacaya Volcano. You can trek up Pacaya Volcano but Jorge said it would be a stupid move and most people just hike the opposite peak and observe the volcano from that safe point.

After thirty minutes of hiking, we reached a clearing. It was still relatively dark, but I could tell we were walking over a valley of lava rock. When the volcano erupts every six years or so it creates a river of lava that leaves behind a field of black lava rock. It was pretty crazy to think we were standing in an area that was a river of lava.

One last incline before we reached the views we had come for. Back where we had come from we could look out over the entire lava river valley. We could also watch the red lava spitting from the volcano before the sun rose. I highly suggest doing the Pacaya Volcano hike for sunrise. It would still be great during the day before sunrise you get to see the fiery lava, which isn’t visible once the sun is out.

To the other side of the peak, several other volcanoes loomed in the distance. However, it was the blanket clouds, slowly rolling over the hills, which caught my attention. The clouds seemed to shape around the hills, mimicking their formation as they blew through the valley beneath us.

Finally, it was time for a cup of coffee. We had each shared turns carrying up a big ceramic pot and know got to enjoy the fruits of our labor. A warm cup of coffee as the sun rose over the mountains, finally gave us some warmth as we marveled at Pacaya Volcano.

What are my favorite pieces of hiking gear?

There are four pieces of gear that I simply never forget when I go on a hike. These are four items that I using right now and this list gets updated every year! Here are my hiking essentials.

Normally the walk down from a hike is a bit of a pain but the descent took us only 8 minutes. Jorge knew a shortcut that had us sliding and leaping our way down the winding gravel trail. It was definitely the most fun I have had descending a hike other than maybe the day we went tropical skiing down Mt Olympus on Oahu.

At the bottom, the ticket office had just opened and unfortunately, we had to pay 50 Quetzales which is equal to about $7 Usd. No worries, the hike was well worth it and we had been lucky enough to have Jorge drive us and guide us. This expedition was nothing to do with the hostel, it was just Jorge being an incredibly generous host and a volcano enthusiast. It isn’t often the hostel owner is the type of person who makes you feel not only welcome at their accommodation, but makes you feel like one of his long-time friends even though he knows you will be in town for two days.

I hope you enjoyed this guide to the Pacaya Volcano Hike near Antigua, Guatemala

We climbed Pacaya in 1972. We camped up there for 2 nights. The noise of the erupting volcano was both scary and amazing.

Such an epic spot, awesome you overnighted.

hey there! great post- we are surely going to make this journey. how long did the incline hike take? can you share the name of the hostel? is that permitted??? thxx all!