Hidden away from the crowds of Kuta is one of the gems of Indonesia in Nyang Nyang Beach, which is a shell collector’s dream and has two shipwrecks on the shore.

I showed our driver Wayan, a photo of the shipwreck on the shore of Nyang Nyang Beach and he didn’t look amused. He had been hoping for a simple day, dropping us off at the Uluwatu Temple and other common tourist spots. Inadvertently he became part of our adventure into the unknown. Wayan admitted he had never been to this beach before, which made us feel less like a tourist for the first time since we had arrived in Bali. There are so many things to do in Bali and Nyang Nyang Beach seemed to be a little more off the beaten path!

Nyang Nyang is a 40 minute drive from Kuta when using the toll bridge, which costs around $1USD. The drive in Bali is always fascinating so the actual journey didn’t bother us as we soaked up the surroundings. This included scenes such as four people on one moped, dogs everywhere and many sights unique to Bali that were new to us.

40 minutes of driving and we arrived at a small sign on the left that said Nyang Nyang Beach. I was glad to see that sign because without it I would have been convinced we were driving down a dead-end. The route was shared with cows on one side, crops on the other, all while we drove down the winding road towards the parking area preceding the beach. 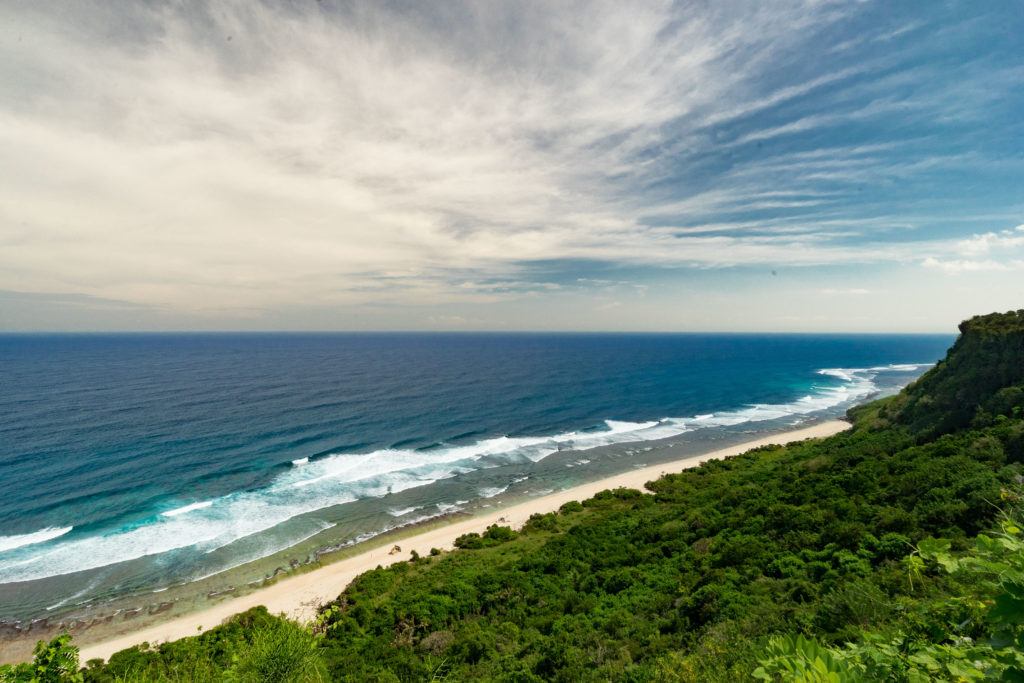 Here the local workers told us it was a 30 minute walk down, which we would later discover was a brisk 10-15 minute walk down the cliffs. We walked through the construction site and the view blew me away. Wow this is an impressive beach! From the top you can see a beautiful shore-level garden, the shipwrecks and the variegated colors of the reef. The sand was white and dramatically met towering cliffs covered in trees. 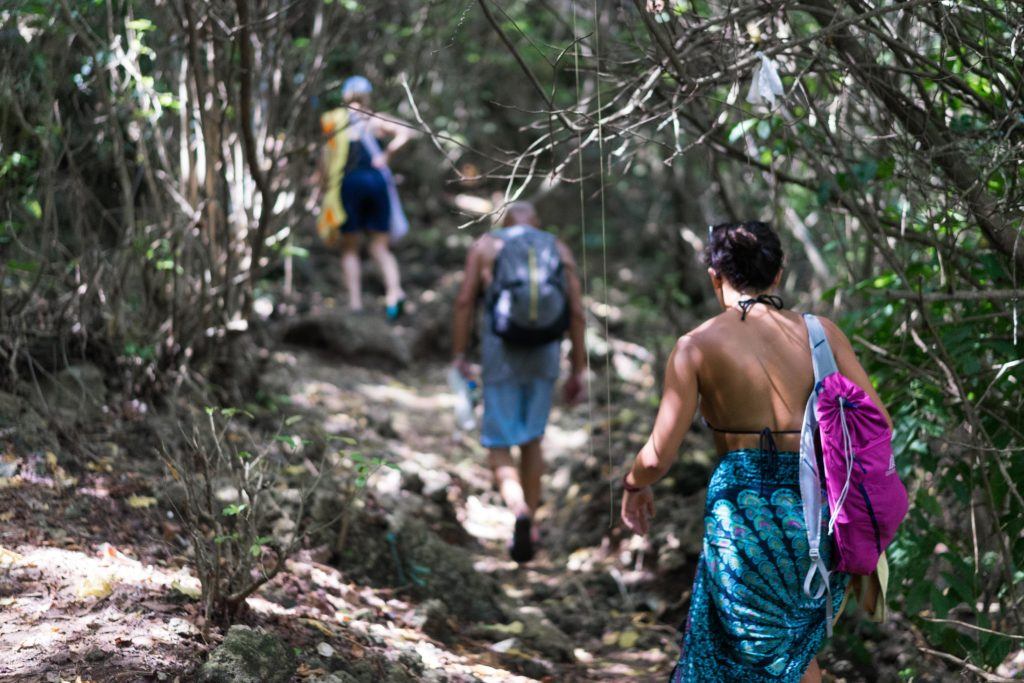 We walked down the cliff-side and spotted a few monkeys along the way, which kept the trek exciting. Arriving at the bottom of the cliff we were met by a herd of cows that failed to cause us any trouble, as they were seemingly more scared of us than us of them. 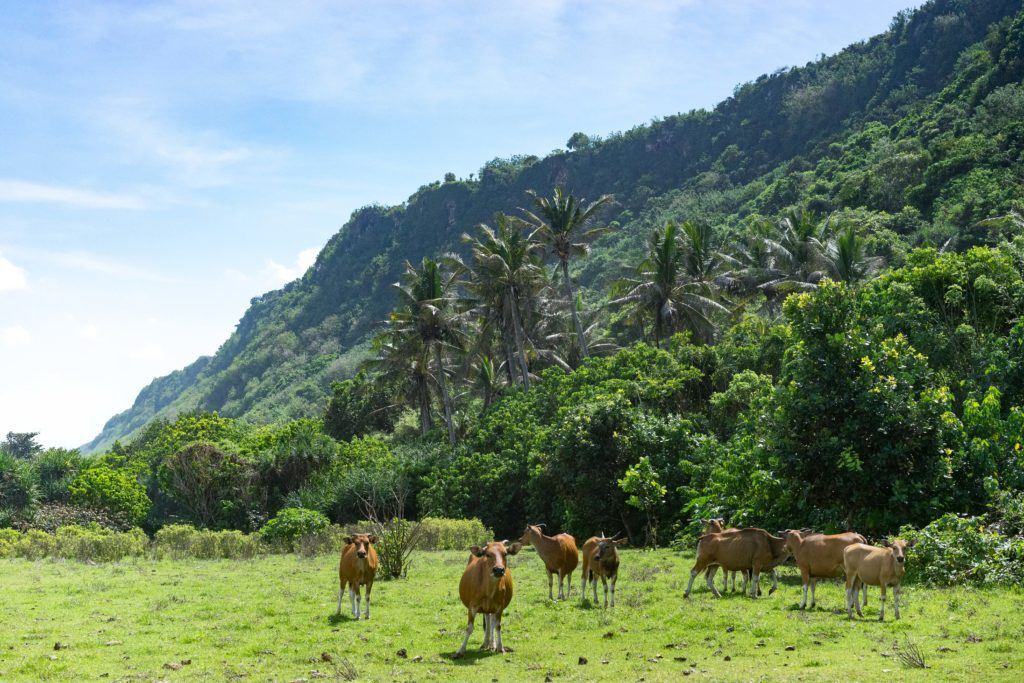 Our feet hit the sand and we couldn’t have been happier. We had made it to Nyang Nyang Beach and it was beautiful. There were shells everywhere. There was also quite a lot of washed up trash, which was sad but it didn’t ruin the tranquility of this isolated stretch of sand. 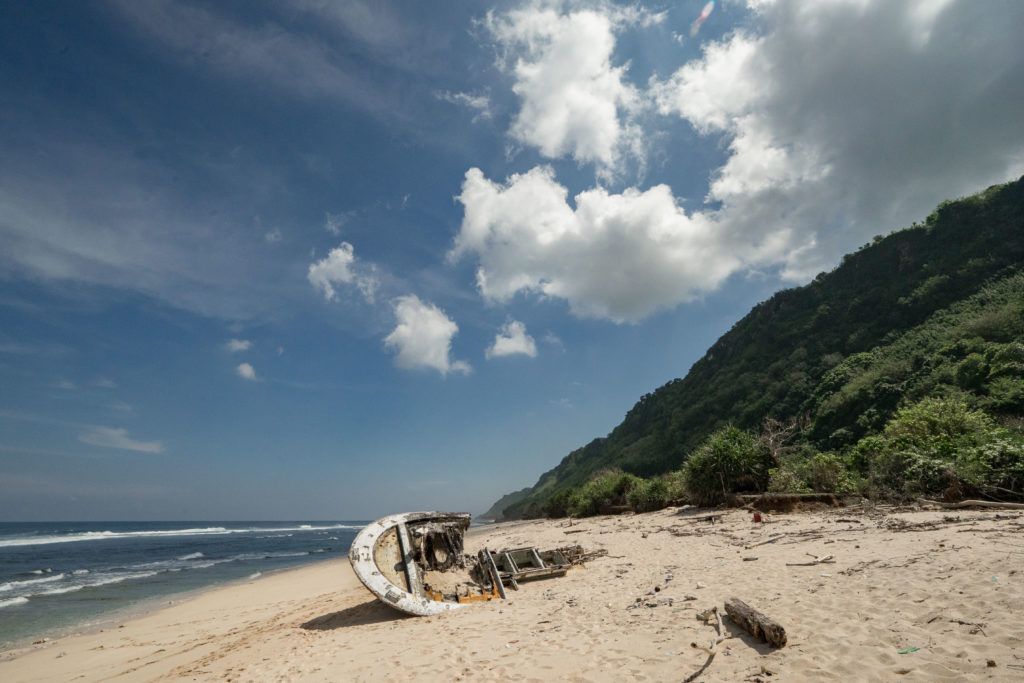 We collected over 40 cowrie shells among other beautiful finds, most of which we left on the beach. This wasn’t a great spot for swimming though, which was the only real let down of Nyang Nyang Beach. The reef is 3 feet below the surface and it doesn’t really deepen so it wasn’t ideal for a cool-off dip after the hike down. 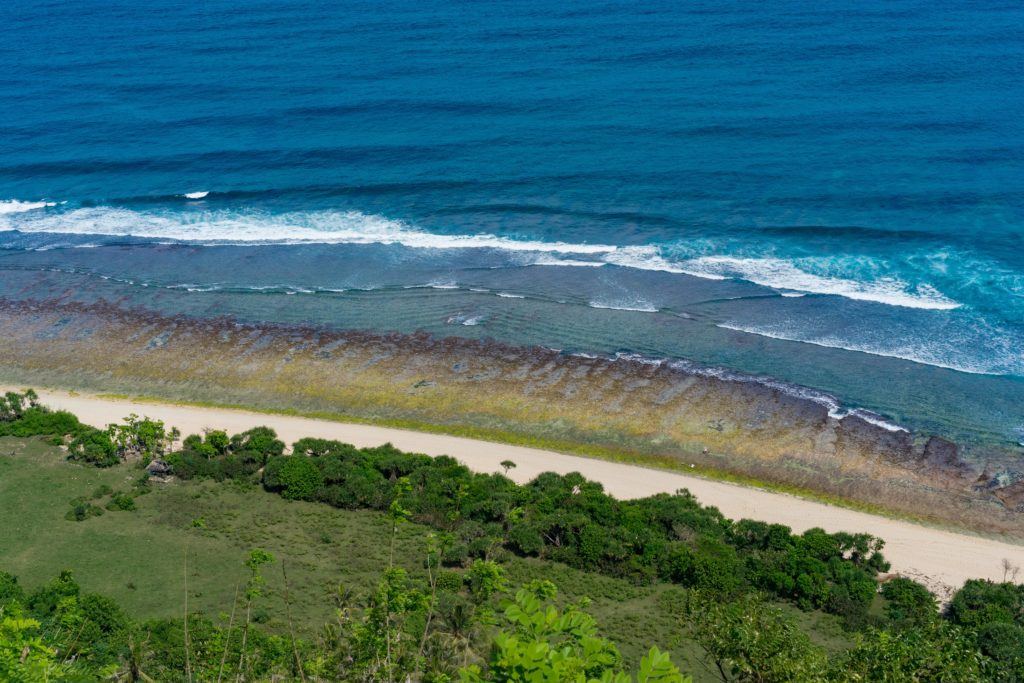 The shipwrecks were as amazing as the photos I had seen, which originally led me to this beach. Two separate ships have washed up on the beach creating a weird feeling as you stand atop the wreck looking out over the ocean. 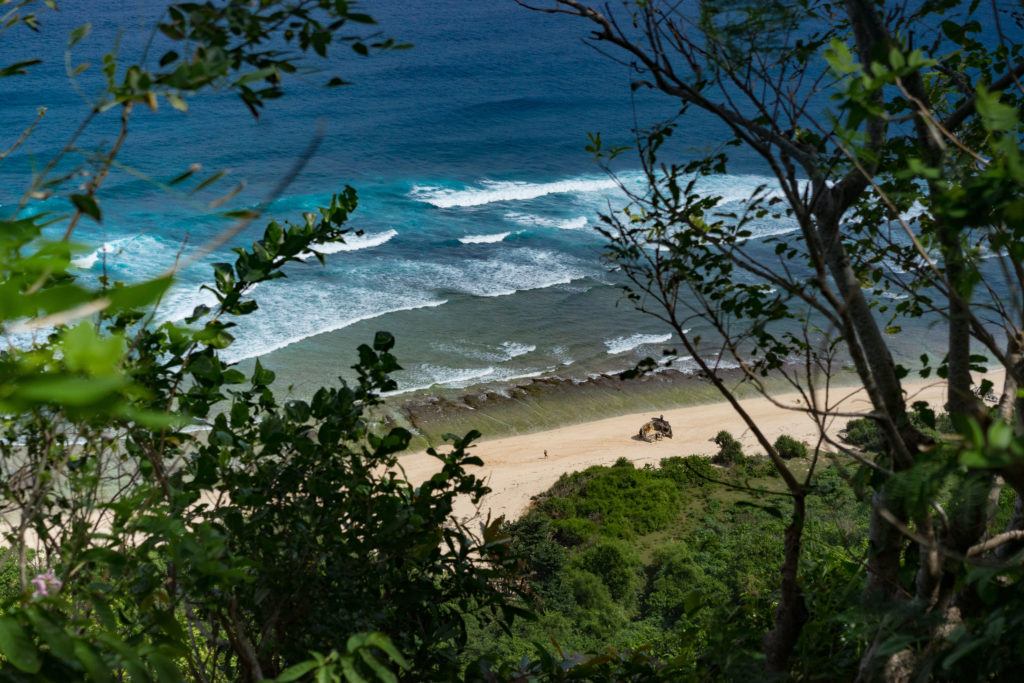 If you are staying in the Kuta/Seminyak/Legian area you can hire a driver for $40 USD per day (negotiate as each driver has a different fee). Our driver, Wayan, took us to Nyang Nyang beach, uluwatu temple, Buddha Soul for lunch and then to Single Fin for dinner. We had 5 passengers in our minivan so for less than $10 USD per day you can explore lots of different spots in the Uluwatu region.

I made sure to have photos and maps of Nyang Nyang beach which ended up being very useful. Wayan didn’t know where Nyang Nyang beach was and tried to take us to Padang Padang beach, which is still a nice beach, however it is full of tourists and not is remarkable as Nyang Nyang Beach. Chances are your driver will want to take you to the easily accessible tourist spots with ample parking. If you are organized with maps you can direct your driver with exact locations you would like to explore.

I really could have hung out all day at this beach, marveling at the wonders washed up onto the shore or staring back up at the lush green cliffs. Only 40 minutes away from Kuta, I highly suggest getting out of the tourist mecca and visiting Nyang Nyang beach to put some wonder into your day. 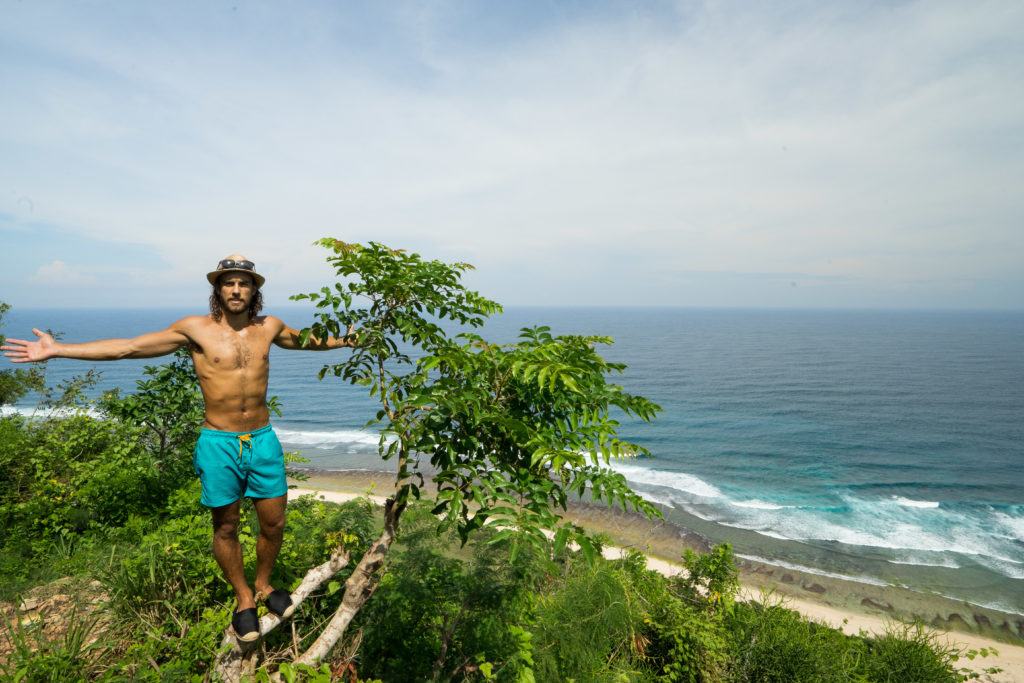 Check out another one of our favorite Bali adventures: The Sacred Monkey Forest!

No history on what those wrecks are about?

Why aren't you showing how it REALLY is? This beach is FULL OF TRASH! Can't stand this all-good talking fake world information anymore... Why can't you just talk about the real thing?? Everything is perfect, everything is fun and beautiful... It's NOT, why don't you try to raise awareness about the real issues in this world? Why are you just trying to become famous and make money by faking how perfect everything is? Don't you feel guilty somehow somewhere doing this? Just like others, yes Nyang Nyang Beach is perfect...totally. Thanks for being just another someone of wannabe influencer talking just about their fake world illustration.

If you wish to learn more about this opportunity, please reply to my email so I will send you additional information.