Climbing Mount Wilhelm is one of the toughest challenges in Papua New Guinea. In fact, it is the tallest peak in Oceania at 4,509m. The journey to base camp and then the summit requires planning, determination and hopefully some good weather! This blog post will detail everything you need to know about planning your trip, the ins and outs of the climb, the gear you need and your options for booking the trip from an organized tour to a DIY expedition. I’ve done and can now share the experience with you.

WHERE IS MOUNT WILHELM

Mount Wilhelm is part of the Bismarck Range and the peak is the exact point where three different provinces meet. These provinces are Chimbu, Jiwaka and Madang. One of the most common routes to reach Mount Wilhelm is to fly into Mount Hagen Airport and then drive up to the starting point or Bettys Lodge (more on the accommodation later) and begin the trek from there. The drive from Mount Hagen to Betty’s Lodge is 4-hours and has a 22-kilometer section on one of the bumpiest roads in the world, suitable only for Landcruiser and a very experienced driver.

MOUNT WILHELM WEATHER (DOES IT SNOW?)

Mount Wilhelm is a tricky beast because the weather is very important as I found out. When we summited, we were unfortunately engulfed by clouds and couldn’t enjoy the view we had worked so hard for. That’s just how it goes with mountaineering and expeditions that are pre-planned but you can give yourself the best chance by visiting in the right season.

THE JOURNEY TO MOUNT WILHELM SUMMIT

After reading the above information, you should now have a good idea about what Mount Wilhelm entails. From this point on, I will share my personal experience starting from Port Moresby and finishing at the peak of Mount Wilhelm. I’ll share all of the insights, tips and moments that happened during our four-day expedition.

The trip begins in Port Moresby, which is where the international airport is located and where most people begin their expedition. From Port Moresby, we flew to Mount Hagen, a trip that costs $100-$200 depending on availability. The flight took 1.5 hours.

Our trip was organized by Buna Trekkers, who are one of the only locally owned tour companies in Papua New Guinea. Many tour companies employ lots of Papua New Guineans but Buna Trekkers were started by a group of ambitious locals, who worked in the industry for several decades and then made the jump to start their own company. The difference is notable. It’s authentic and something we should all support tremendously.

Buna Trekkers oversaw all of the logistics including our pick-up from Mount Hagen. Betty, the owner of Betty’s Lodge had driven down from the lodge, which takes four hours. She picked us up and drove us back up the mountain with her husband Peter. It’s a crazy, bumpy journey she does several times a week. Expect a passionate, vibrant character who will share with you the history of her lodge but also the entire region. She’s a bit of a local legend as you will see by the number of people who yell out to her as you drive past.

DIY option: If you don’t book through a tour company like Buna Trekkers you can book directly through Betty’s Lodge. I’ll go through all of the booking details at the bottom of the post but you can organize the pick-up when booking with Betty’s Lodge directly.

REAL DIY option: If you want to just arrive at Betty’s without organizing a pick-up and full package through her lodge you are in for an adventure my friend. There are a few local pick-up buses but no real organized public transport. I imagine you would have to hitchhike or get yourself onto one of these buses. It seemed pretty safe and everyone I met was friendly but I was with the local legend Betty, so I cannot speak out of experience about how easy or safe it would be to do a DIY transit from Mt Hagen to Betty’s Lodge (or to the start of the trail).

BETTY’S LODGE – THE BEST ACCOMMODATION FOR THE MOUNT WILHELM TREK

Betty’s Lodge is one of those iconic accommodations you come across on your travels. Everyone knows it, everyone knows Betty. She’s been in the community for 33-years and at the top of a bumpy road, she has built a haven for hikers. She prides herself on providing as much luxury as she can in this remote village. Hikers are treated to hot water, comfortable beds and best of all, a really great spread of food at every meal. Little touches like afternoon coffee and fresh strawberries make it feel like home.

The lodge is at 2,800m of incline so it’s good to spend a night here acclimatizing before heading up to base camp at 3,500m. We stayed here for one night and then trekked up to base camp where we spent one night, summited in the morning and then trekked all the way back down to Betty’s Lodge to stay one more night before driving back to Mount Hagen. This is a great way and gives you a little bit of acclimatization time. I would suggest maybe two nights at base camp so you can better acclimatize. I struggled with altitude sickness so this would’ve benefited me.

The climb begins at Betty’s Lodge and took us three hours to trek the 5.7kms to the base camp. We had a guide, Lukas, lead the way although the path is quite well defined and easy to follow. Despite it being a clear path it was still pretty slow going due to the mud and roots. Before we set off we had a group photo with Betty, Peter, our guide Lukas and some of the staff from Betty’s Lodge.

The trail begins in the jungle and is very humid. I instantly regretted wearing my thermals and would suggest wearing just your regular hiking clothes until you reach the base camp and then you can layer up as it was freezing at night. For the first 1.5 hours we were surrounded by trees and making a slow, consistent climb until we emerged into a clearing.

The trail opened up into a huge valley of beautiful palms. It was quite a unique landscape and very eerie on the day we visited with clouds rolling through, low fog hanging around and the occasional rain dampening the plants. There are a few spots to fill up your water throughout the trek to base camp. From the open valley, you only have an hour left and pass by a waterfall en route to the base camp.

There are actually several base camp huts but we headed to the one on the left which has an A-frame hut for the kitchen attached to another elevated hut with the bedrooms. In addition to the kitchen and lodging hut, there is a small thatch hut for the fire for cooking. For your reference, we had some basic 3G phone connection but there is no electricity source.

We arrived to base camp early in the afternoon, which mean we got into the hut before the rain came and kept dry. It also gave us 12 full hours to acclimatize although that wasn’t quite enough for me. Betty organized one of the young girls from the village to trek up and cook for everyone, which is part of the package when you book with her or with Buna Trekkers.

At base camp you can explore the nearby lake or do a little hike up the second lake, which you will pass the next day en-route to the summit.

MOUNT WILHELM CLIMB FROM BASE CAMP TO SUMMIT

After a very cold night in the hut, we woke at 1:30 am to begin the climb.  A headtorch and all layers of warmth were necessary. Almost the entirety of the trek up was done in the dark as we battled the incline of a 1,000m climb, the muddy terrain, and the altitude.

Things were going smoothly until about 4,200m when the altitude starting to catch me and I became light-headed. At this point it was a struggle for me. The path takes you past the second lake and then up through the rocky summit region beyond 4,200m.

I didn’t take any photos in the dark but took one on the way back down from a section closer to the second lake. The terrain is much rockier and quite slow going. The total distance from base camp to summit was 6-kilometers with 1200m of incline.

From the summit, you should have viewed all the way to Madang and back toward the lakes. However, it was unlucky for us to be inside the clouds. I have included a few images from those who were there on a clearer day to help you understand the terrain and how magnificent the views can be from the Mount Wilhelm Summit. 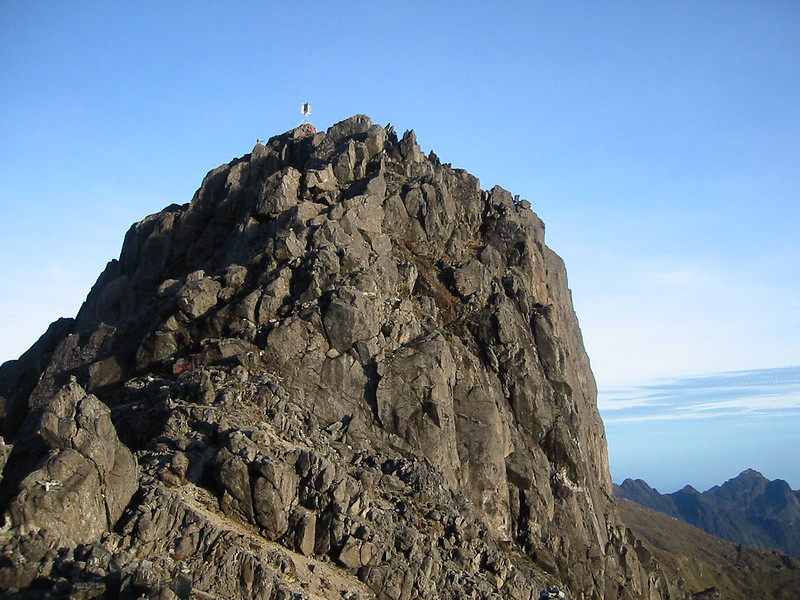 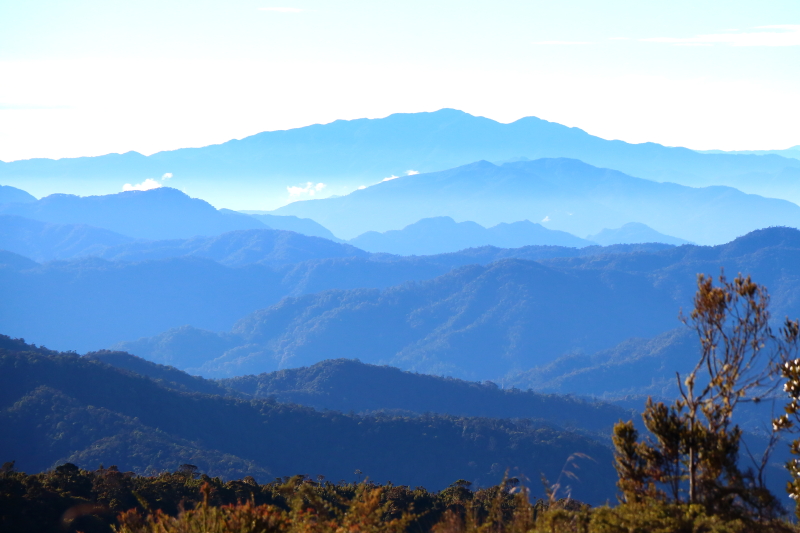 I did my best to document the entire expedition but the final ascent was tough with altitude sickness and was in the dark so there’s a little gap there. I hope you enjoy it either way.

Mount Wilhelm can be accessed by two different routes. The most common route is the one we did, from the village of Kegslugl at the end of the road from Kundiawa in the Chimbu province. The harder route starts from Ambullua Village in the Western Highlands. The route from Chimbu side usually takes two days while the route starting from the Western Highlands is a 4-day expedition.

You will be staying overnight at the hut where food will be provided, bedding is taken care of and you need not worry about the fire (unless of course, you are going rogue solo). Therefore you need to pack the essentials for yourself. You can leave some gear at base camp so you have a lighter load for the summit ascent.

These are the packing suggestions for Mount Wilhelm based on my experience in November.

HOW TO BOOK MOUNT WILHELM

To book Mount Wilhelm with a tour company that will organize all of your logistics and includes a village visit and other cultural activities you can get in contact with the tour company I used. I also trekked Kokoda with the same company.

To send them an email enquiry: bunatrekkers@gmail.com

To visit the website and make a booking: Betty’s Lodge

To send an email enquiry: bookings@villagehuts.com

The photo below is our Buna Trekkers guides on the Kokoda Track.