After a few amazing days in Pushkar, I read an article that mentioned an ancient city 35 miles away. Merta City has a population of 40,000 almost four times that of its famous neighbor Pushkar. That’s why it was so surprising to find no information or pictures of the town when I looked online. I decided I would rent a bike and head out on a journey to Merta City and see what the town was like and why hardly any tourists visited.

I walked to the bike shop and rented the wildest looking automatic moped. I still don’t know how to drive manual. Someone, please teach me! This red thing clocked up to 80kms, and with my hair waving in the wind ensured every single person, cow and camel stared at me as I sped along towards Merta City from Pushkar.

The drive was on a beautiful road almost the entire way until I reached the outskirts of Merta. The roads were now a rocky bumpy maze with different levels and obstacles laid out before me. As I reached the town it seemed as if everybody was staring at me. I later found out I was one of a few visitors to Merta City each month. So with my long hair, beard, and bright red bike the attention seemed justified.

Two guys pulled up next to me on a motorbike and told me they knew me. I thought here we go where are they going to lead me. Praveen one of the guys spoke English and told me I should come with him to visit a temple. Why not I thought so off we went. We pulled in to a small lane overlooking a lake with some temples in the distance and a small crowd began to gather. Praveen told me we were at Dangolai but I am not sure if that is the whole area or the temples nearby.  Before long it was discovered I had a drone. Minutes later it was up in the air with ten guys now in our crew watching.

We then jumped back on the bike and headed to an ancient ruin. The 500-year old ruins were the birthplace of Meerabai a 16th-century Hindu mystic poet and devotee of Krishna. We wandered through the temple to find the walls overgrown by plants and vegetation. As we walked into one door a cow stared back at us before bats flew out of the windows. It was time to go. 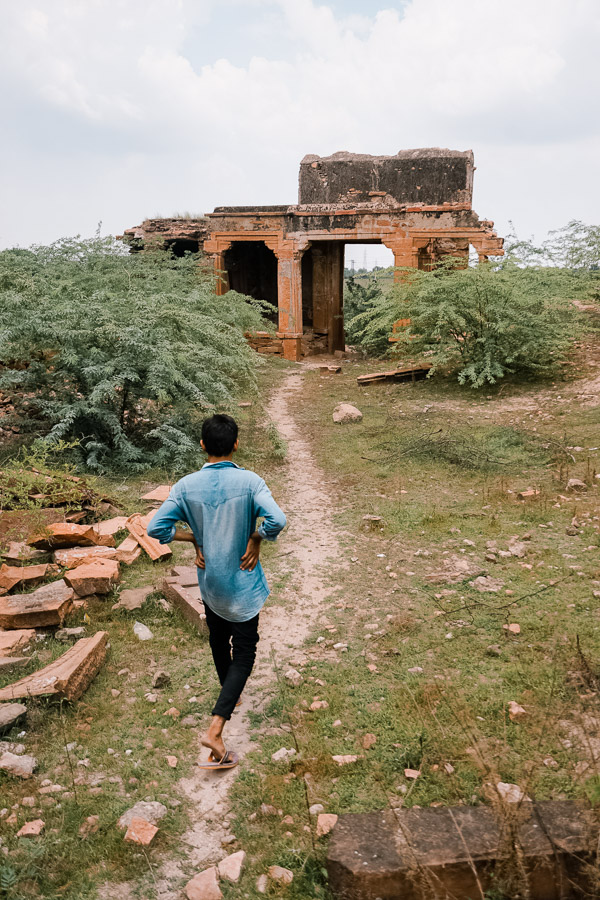 After heading back to Praveen’s house for a snack and some water we ventured into the city center where the main places of worship are in the middle of a busy market area. Meera Bai Temple has a beautiful, colorful interior. Thousands of tiles, mirrors, and gems cover the walls and floor of the temple. Inside women were sitting on the ground chatting as we looked at the paintings on the walls depicting all of the gods. An old woman with, long white hair came up to me looked me in the eye and said this is the temple of the god with four arms and waited for my reaction. It was a tense five seconds before she went on her way out of the temple. 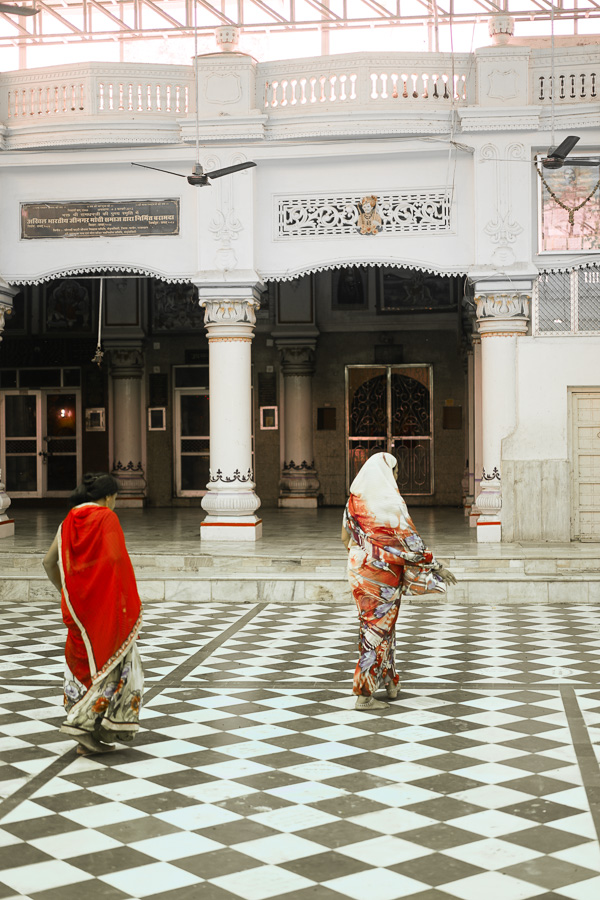 We headed a little out of town to a fort that Praveen didn’t know the name of. It reminded me of the walls at Amer Fort in Jaipur but was much, much smaller. A guard didn’t allow us in due to construction so we drove around it before heading back into town to try a local specialty. The ice-cream is called “Gola” and is a ball of ice on a stick with syrup of your choice doused over it before being seasoned with some nuts and fruits. It was like the Merta version of shave ice.

I was pretty tired by now but we headed back to Praveen’s house where his mother tried to feed me different dishes and made me an iced coffee and chai tea. His little brother was stoked about the drone so we went to their terrace rooftop and made another flight. The drone made friends with the pigeon population during the flights and was followed by up to fifty birds at some points. 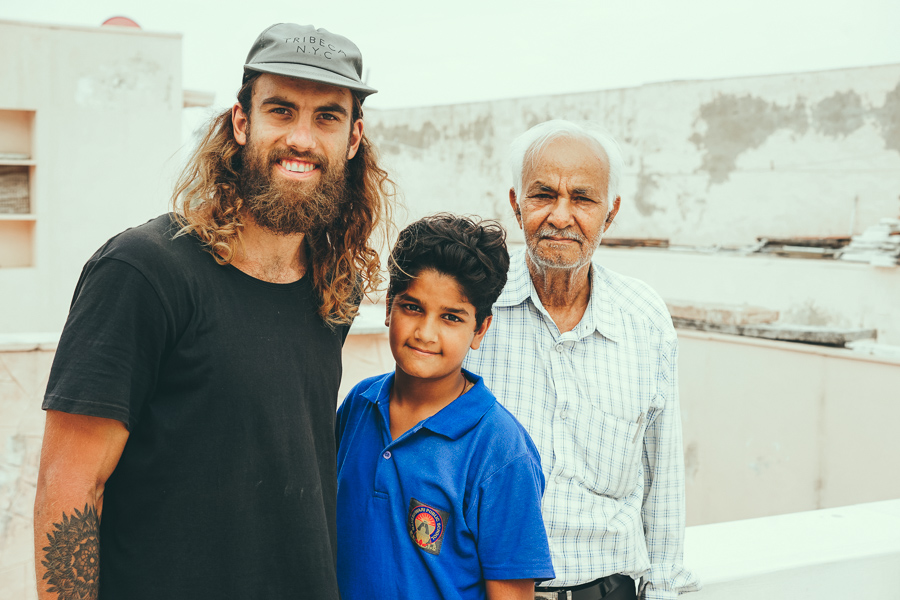 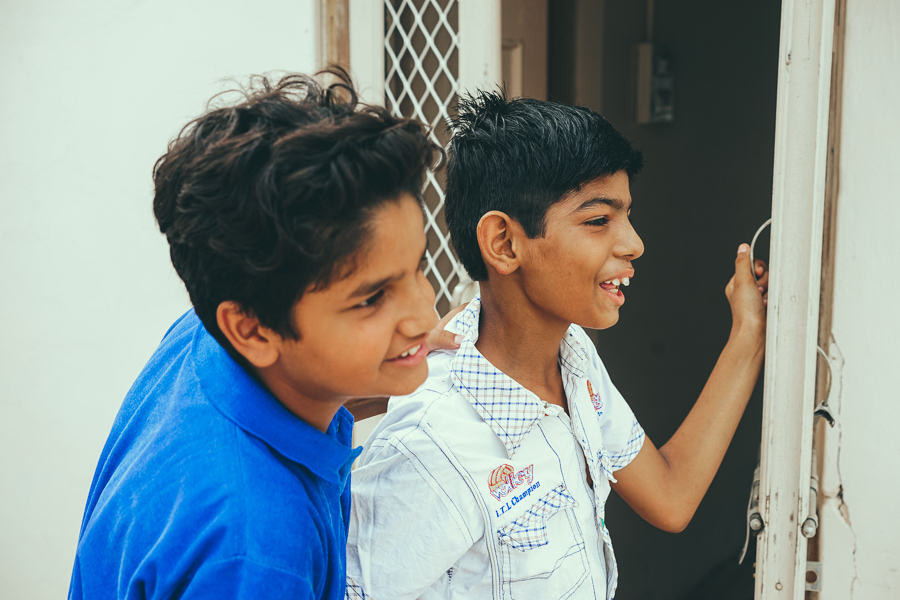 I hung out with Praveen’s family for a while before packing everything up and making the 1.5 hours journey back to Pushkar from Merta City. Everybody is always looking for off the beaten path locations. If you are in Rajasthan and want to see a town where tourism doesn’t exist and just explore and meet friendly locals. Merta is a great place for an adventure day.