On one of the most stunning jungle trails in the world, we looked for the lost waterfalls of Boquete. Through luscious jungle, we trekked. Over muddy paths, we slipped and stumbled. From one patch of wildflowers to the next we discovered. Until we reached three, breathtakingly powerful and mind-blowingly beautiful waterfalls. The Lost Waterfall Trail Hike is one of the best hikes to do in Boquete and even in the whole of Panama.

HOW TO GET TO THE LOST WATERFALLS TRAILHEAD

We were staying at Mamallena Hostel in Boquete town. They have lots of offers for waterfall tours and guided excursions. Luckily, you can save yourself the money and make this a DIY adventure because it isn’t very hard at all to organize the logistics. These are the following steps for how to reach the Trailhead of the Lost Waterfalls Hike in Boquete. 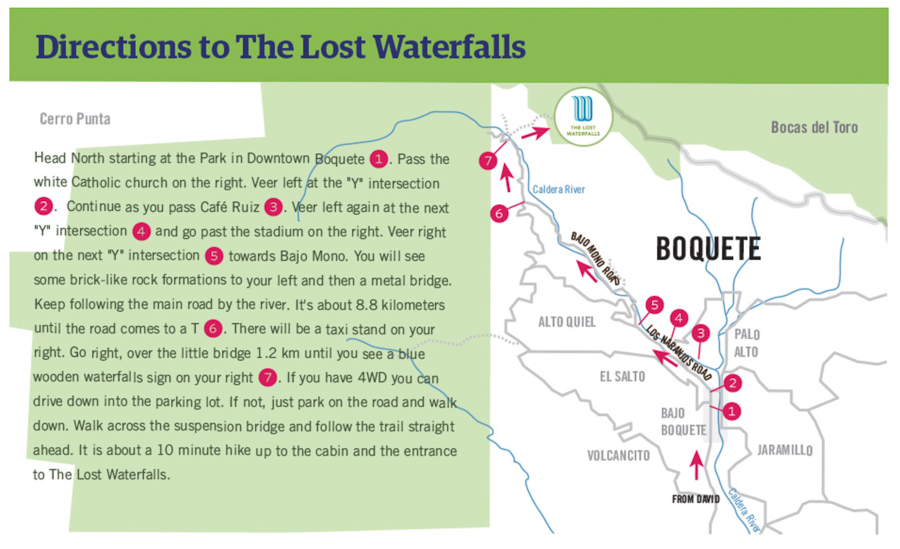 While waiting for the bus, a friendly local named Carlos convinced us to take a cab ride with him instead of waiting for the bus. Because there were three of us it turned out to be cheaper. I also got a free Spanish lesson with Carlos on the drive to the waterfall as we both tried to understand each other. We discussed the Quetzal, football and that he has lived in Boquete for 55 years. That’s local knowledge right there! Carlos dropped us right at the suspension bridge, which was super handy. 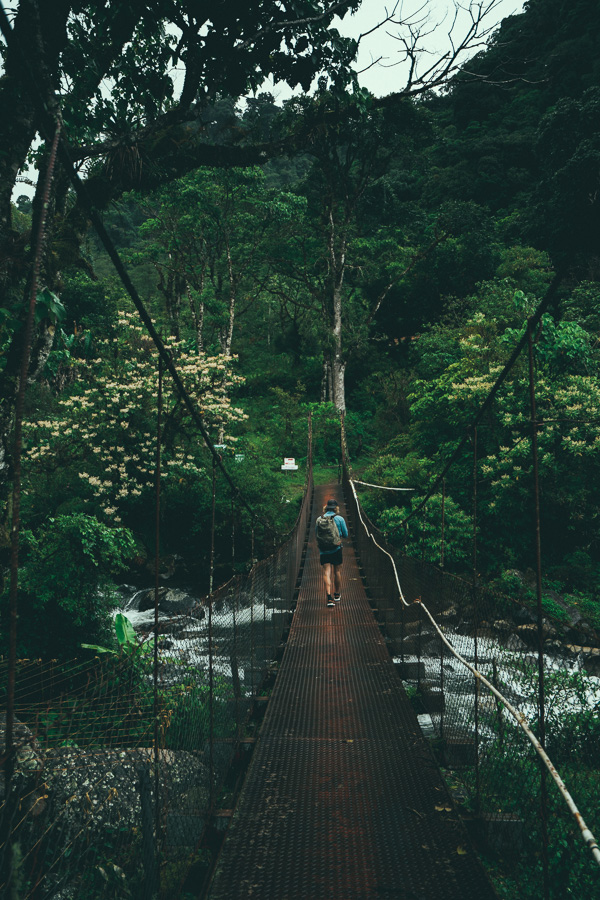 After the suspension bridge, things are quite simple. There are signs the whole way directing you to the entrance cabin. From the suspension, it takes less than 10 minutes up the hill. At the cabin, there was a man who took our $7 USD. He also had us fill in your info so we could check in and out of the hike. Old mate also told us about the hike and in my limited Spanish we determined it was 2-3 hours out and back. The three waterfalls were open but he warned us to be careful between waterfall two and three. We checked out his map and we were good to go. Hasta Luego. 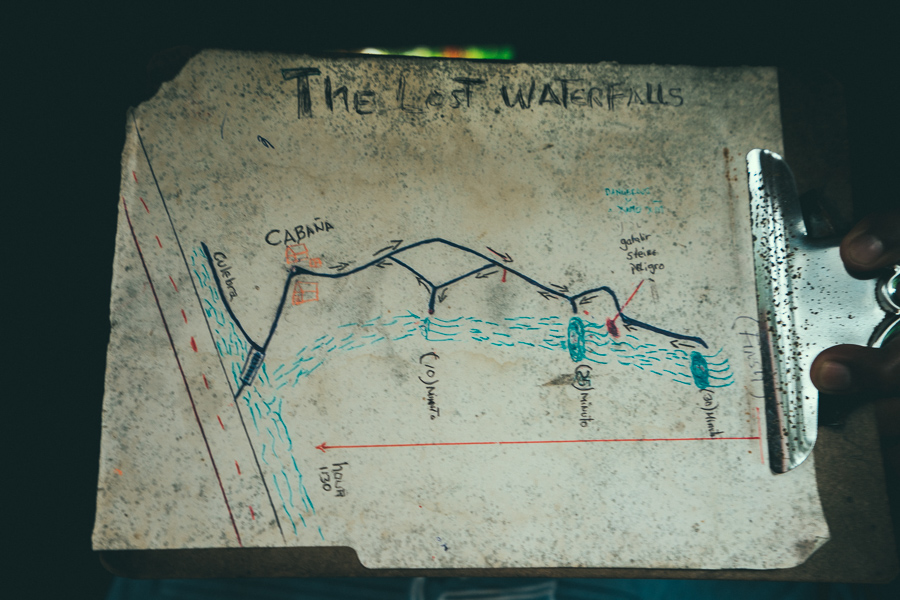 The trail led us through some awesome jungle scenes. From the moment we left the cabin, we were immersed in hanging vines, luscious trees, and huge leaves. Soon we were beneath the canopy of the jungle and in full adventure mode. Although we were only 20 minutes away from Boquete town we could have been hours gone. All we could here was the sound of waterfalls in the distance and the chirp of birds. Was it a Quetzal? 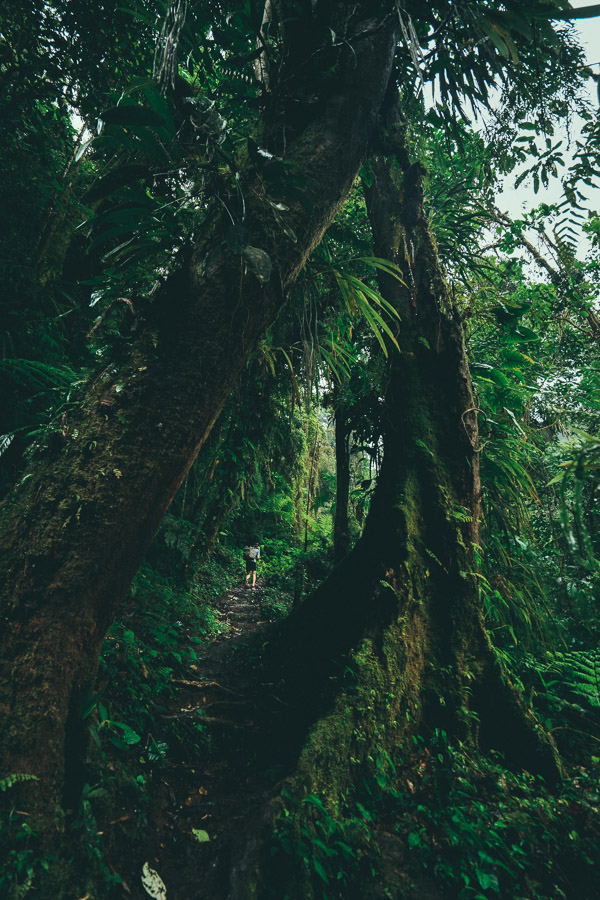 For some reason, the consensus in the guides I read and from the man at the cabin is to visit the second waterfall first, the third waterfall second and the first waterfall last. I like to think I am a pretty logical thinker. I can’t come up with any reason to do so. It’s an out and back trail and all three waterfalls are epic. Hit them in any order you prefer!

We walked past waterfall one and made our way directly to waterfall two. Within the first few minutes of the walk, our shoes were already smeared in mud. By now they had been engulfed and their cleanliness was lost to the wrath of The Lost Waterfall Trail.

Waterfall two was a simple spill, but a powerful cascade. Pouring over the edge of the cliff into a small pool, the first waterfall of our day had us mesmerized. Thanks, Panama for the memories, we knew this was going to be an epic day. 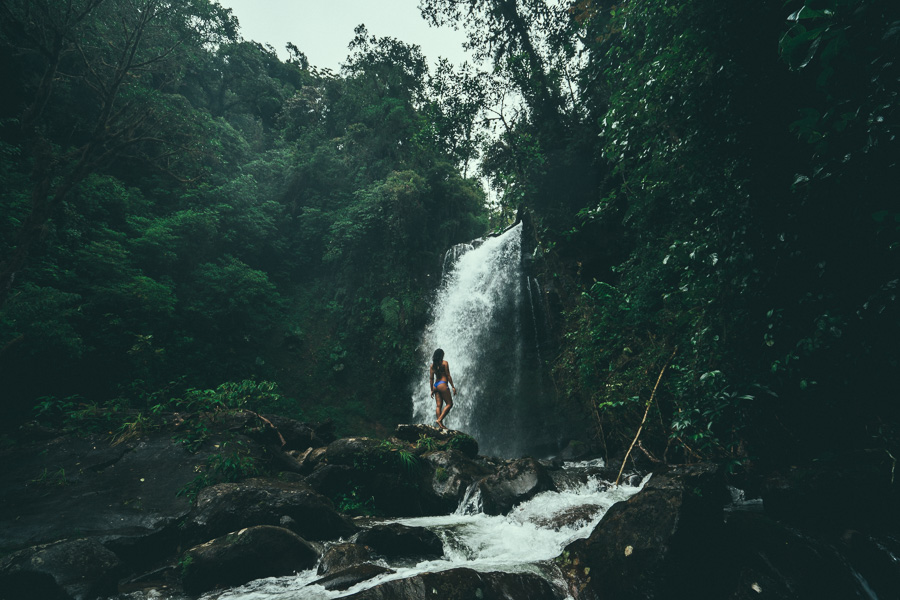 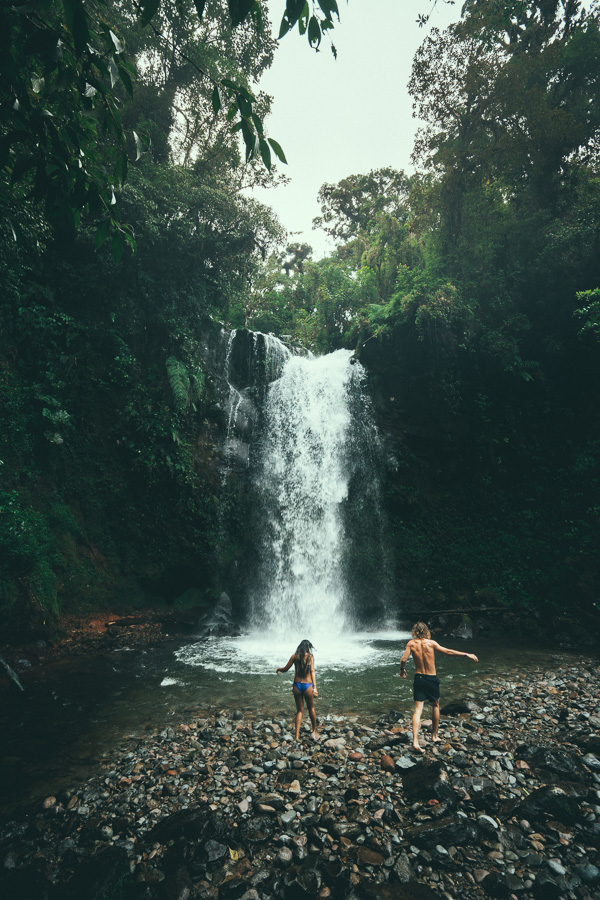 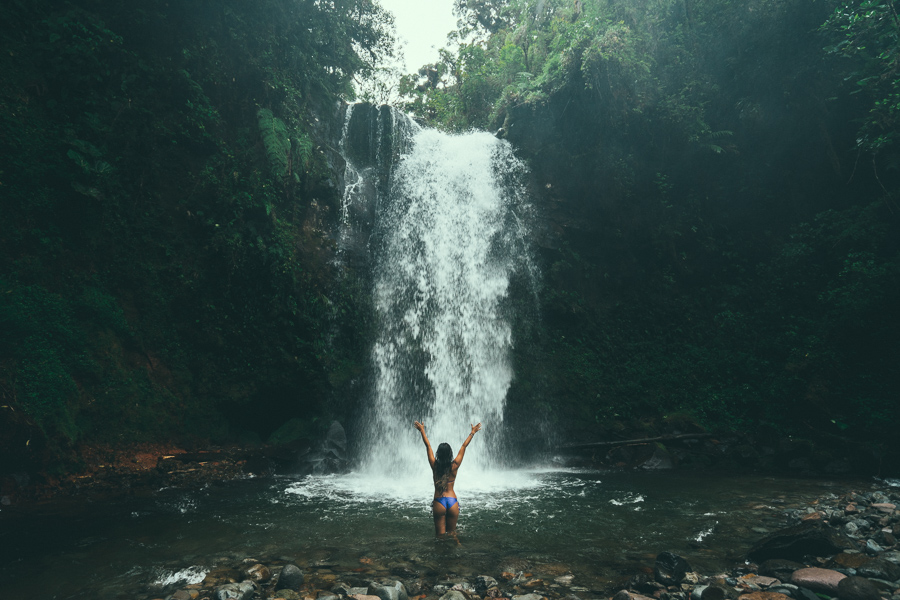 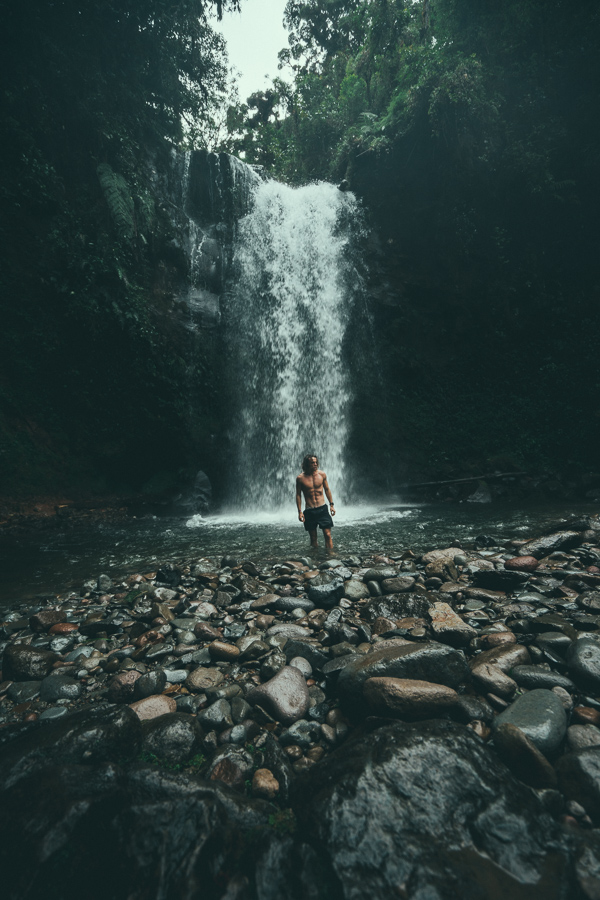 After hanging out the second waterfall til we were freezing cold, we continued on up the trail to the third waterfall. One last shot as we found an awesome little tree tunnel that looked back towards waterfall two. 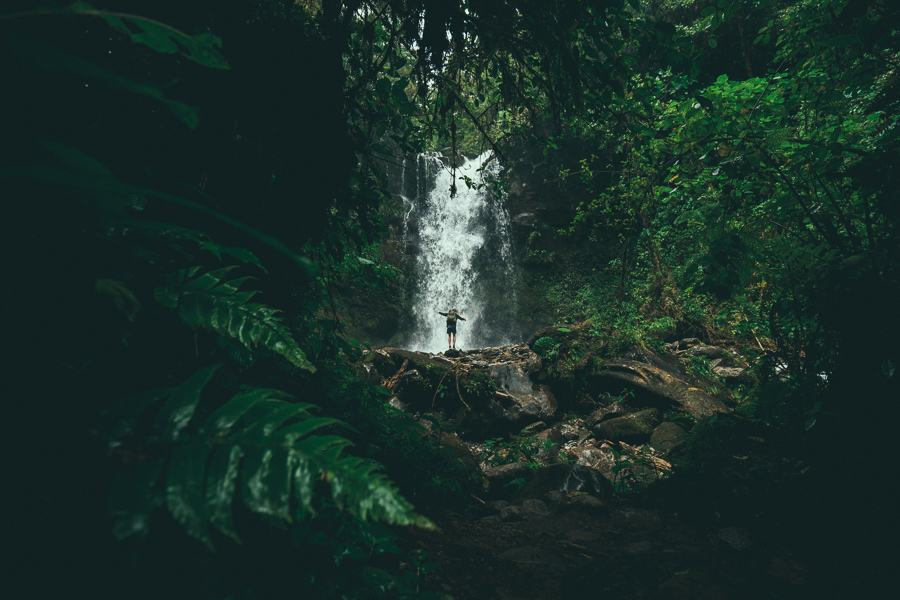 The trek to waterfall three was my favorite part of the hike. It reminded me of the Daintree Rainforest in Australia. Around each bend was a stunning little scene with crystal clear water beneath hanging vines and exotic leaves. A few others were on the trail but we were only with others for a handful of minutes throughout the day.

From waterfall two to waterfall three the hike does get a little steep but for most it won’t be any trouble. However, if you are an elderly hiker or not too confident with uneven ground maybe just enjoy the first two waterfalls. If not, get ready for waterfall three. 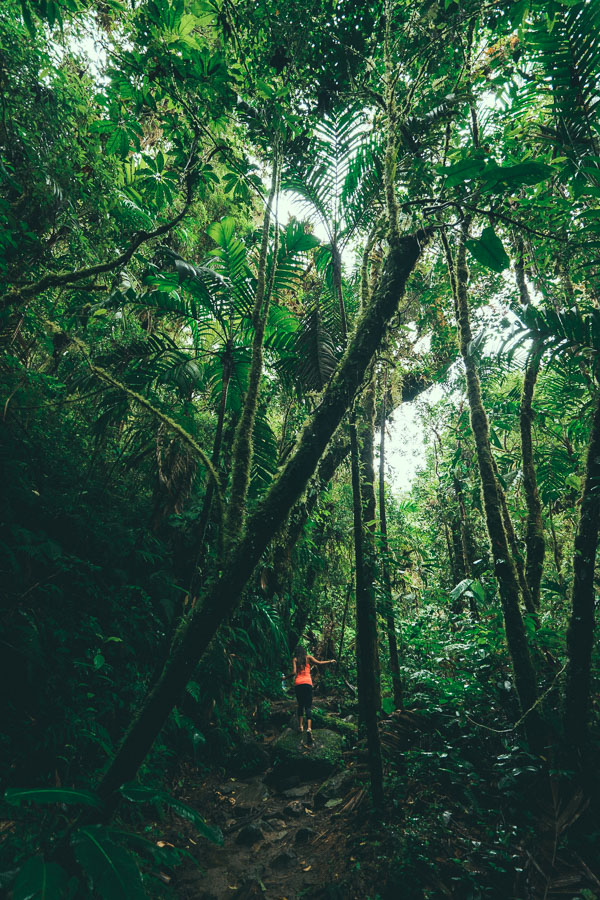 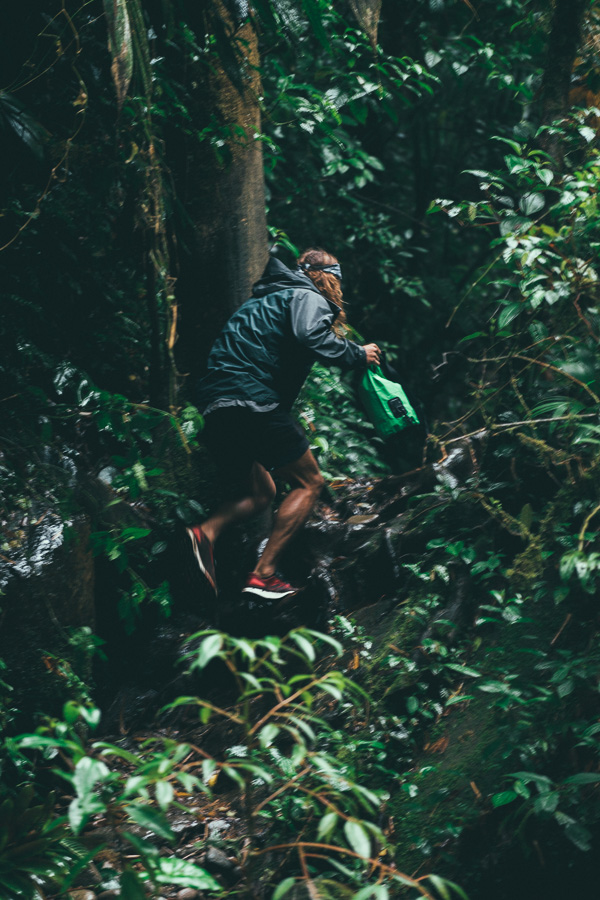 A huge corridor shoots straight above the river and runs directly into a wall of force cascading down the cliff. Congratulations you have reached waterfall three. It was my favorite waterfall of the three and I just fell in love with this area. 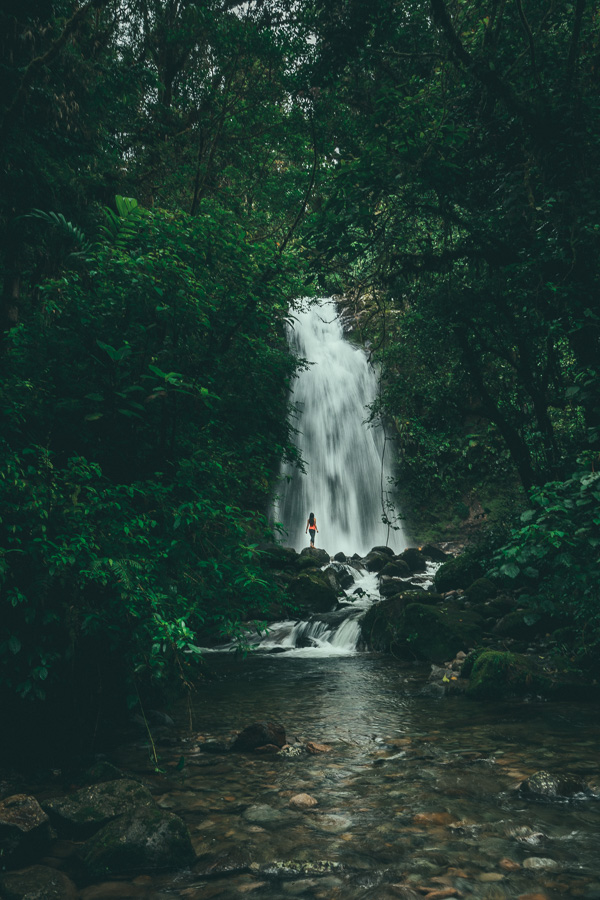 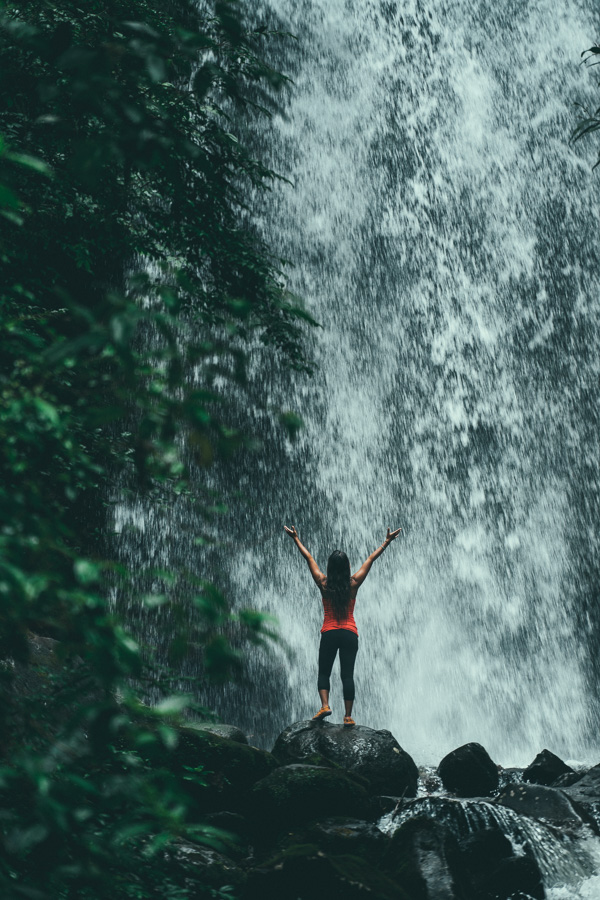 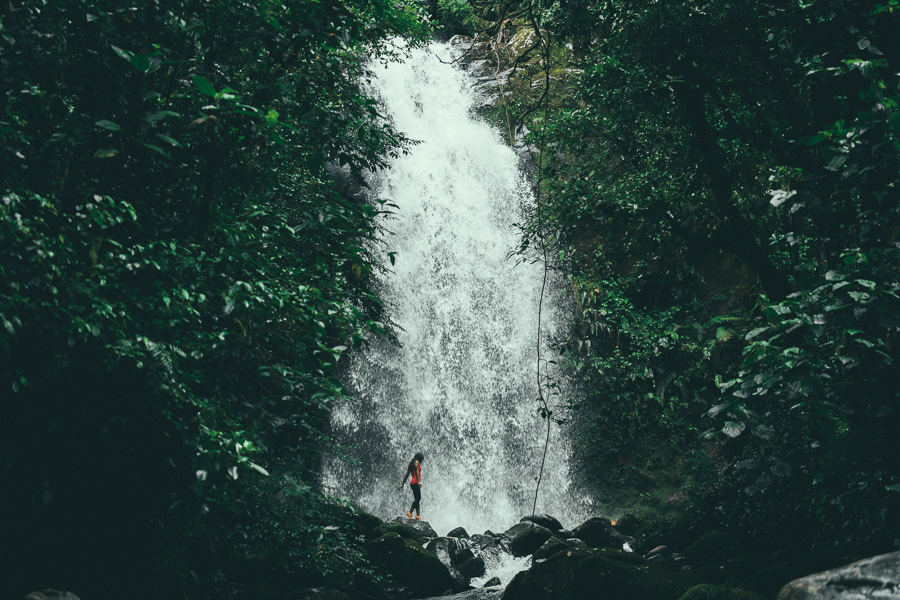 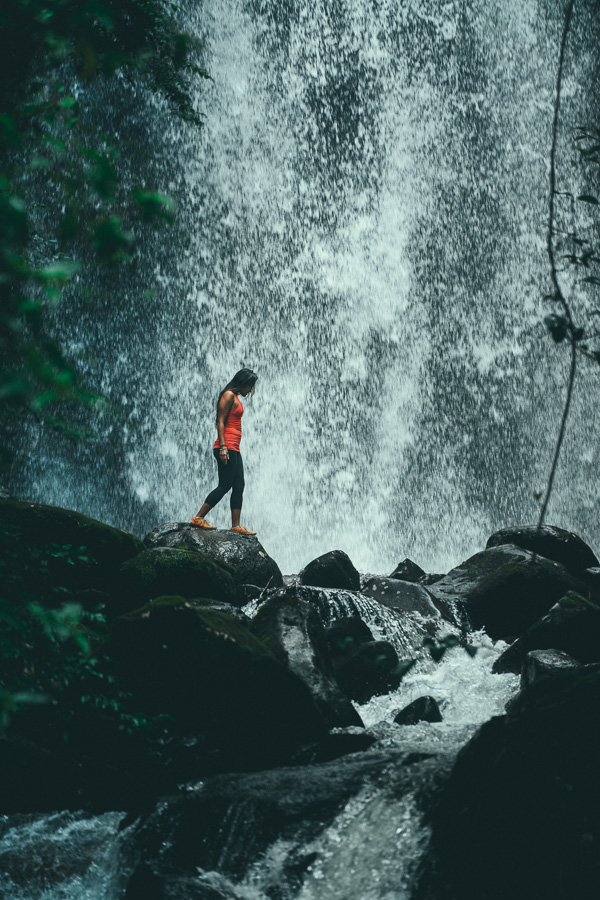 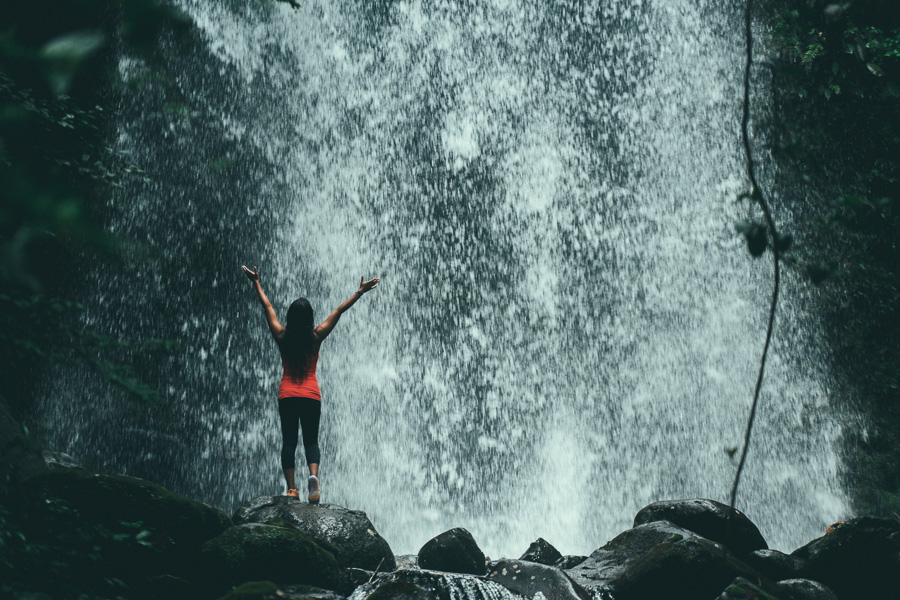 After an epic time enjoying waterfall three we headed back to waterfall one.  This stretch when walked directly takes only about 20-30 minutes if you don’t stop for photos as we did on the way there. We assumed waterfall one was just a little puddle after being told to visit it last by multiple people. When we arrived, we were in fact incredibly mistaken.

Waterfall one was massive. It was the biggest waterfall of all three. However, you cannot reach the bottom pool and it can only be enjoyed from a viewing platform for your safety. Even the viewing platform is a little ominous with huge drops and no fences. We hung out here for a little while, taking in our last bit of waterfall magic for the day. 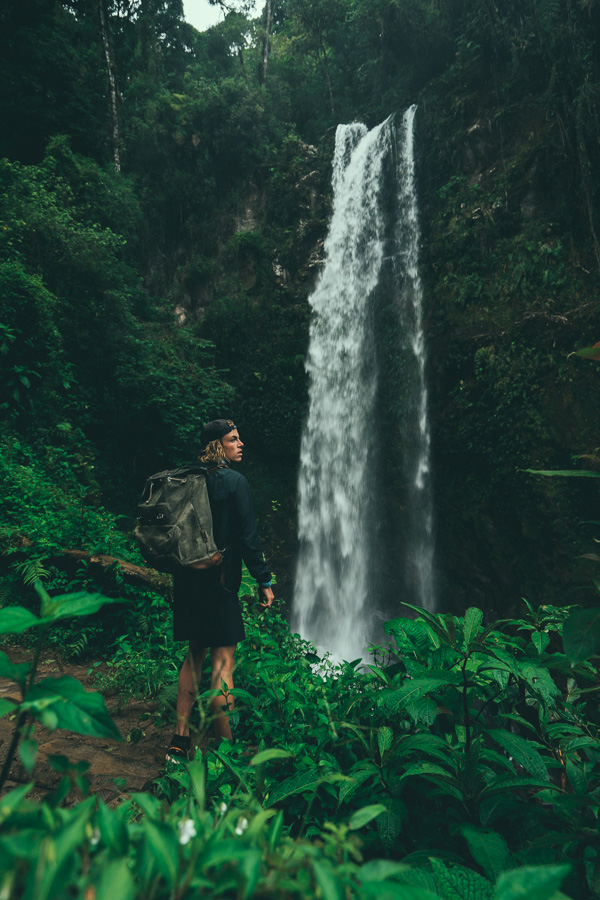 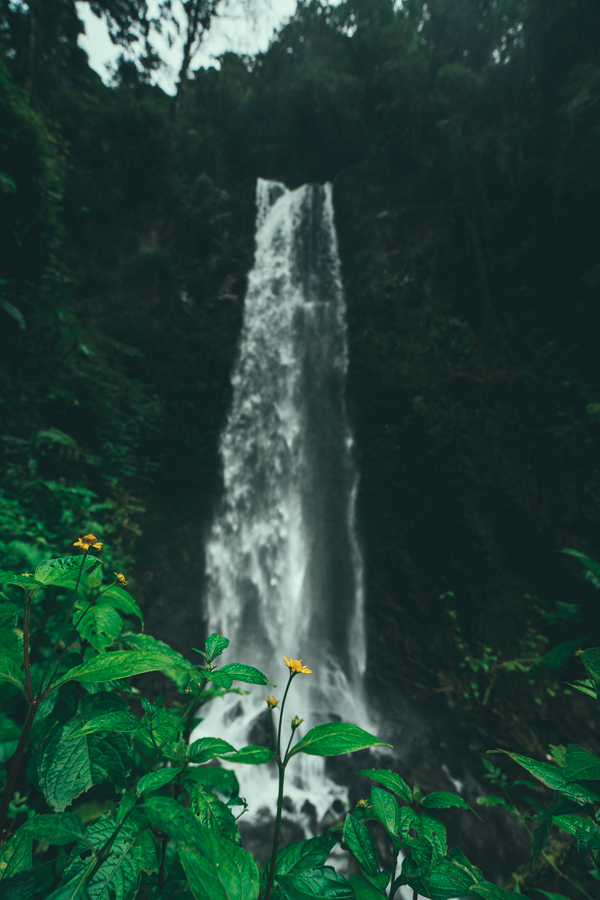 Now to get home was the hard part. There was no-one at the cabin to sign out with so I hope they didn’t send a search party for us! We walked back out to the road after crossing the suspension bridge and began to look for any sign of a taxi or a bus. No sign. We kept walking. A huge truck came around the corner at an aggressive speed. Josh instinctively threw out a thumb for a hitchhike ride and the truck screeched to a halt. We yelled at a loud ‘Gracias’ in unison as we bundled onto the back tray of the truck. The driver ended up taking us all the way back into town, where we disembarked like cattle being taken to the market. It was a handy finish to the day and saved us about an hour. What a friendly local! 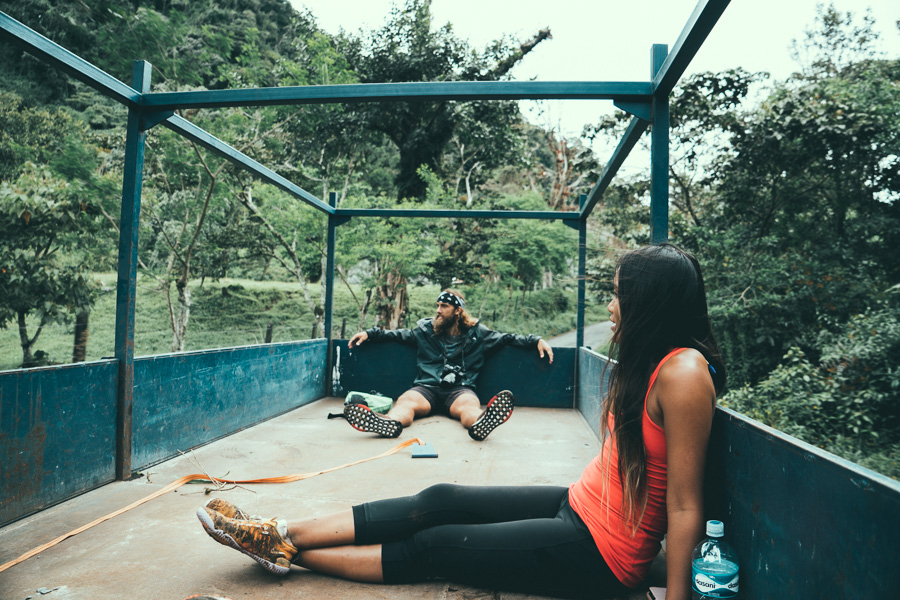 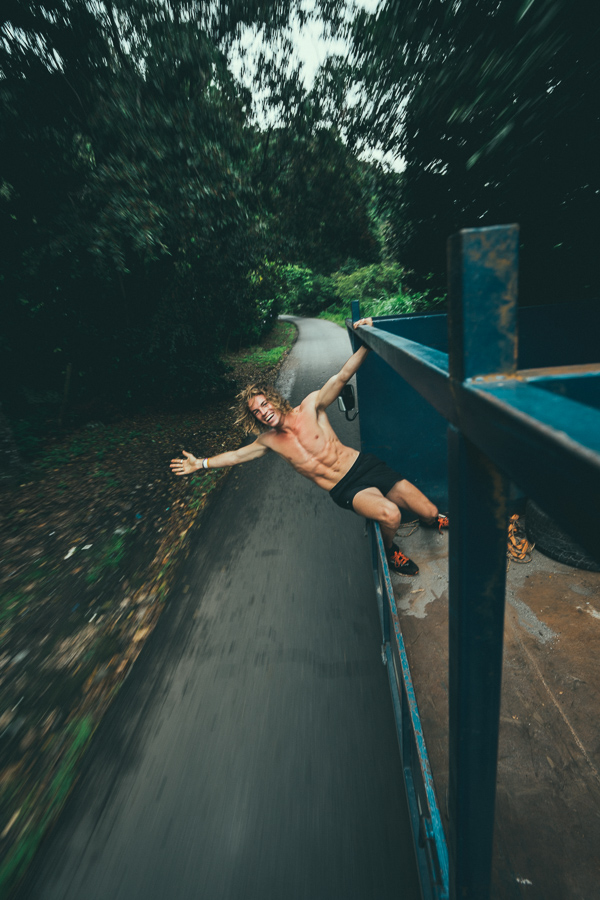 What a great day it was and all up it cost us $3 each for the taxi and $7 for the entrance fee. If you do make it to Boquete you need to do The Lost Waterfalls Trail and I hope you have an amazing time just as we did!

Hey Jackson, thanks for the article. We've done the hike today and the new price is 10$ for the entry. We spend 3hrs for the tracks with some breaks at nice spots.

do you remember if dogs were allowed to go hiking with you to this destination or any destinations in Boquete?

I think they would be allowed

hello, I wanted to know what are their working hours. I meant to say the schedule. I am planning to go on the 3rd of feb. I would appreciate if you could provide with the info.

I, also, love the Lost Waterfalls but I am a little prejudiced as it is my property. I just wanted to thank you for such a lovely article and for appreciating the area as I do. You know, after the first hike, it is free....so come back any time. Cheers

Hola, we will be traveling from Bocas Del Toro to Chiriqui area. We plan to experience Lost Waterfalls, we haven't reserved accomadations yet, can you recommend any?