Los Valles Waterfall cliff jump is by far one of my favorite places to hang out in all of Panama. Taking in the sun while laying on the rocks in between massive cliff jumps is heaven on earth for me!

From the road where we parked the car, there is about a 30-minute walk until you will reach the falls. Along the way, you will follow the road across several rivers and be continually surrounded by farms and cows. The rivers require a little bit of rock-hopping but on the day we visited it was possible to cross without getting your feet wet. The walk in is not incredibly scenic but knowing you are about to send some jumps means the adrenaline is already kicking in.

The region, which includes several viewpoints and waterfalls is owned by the local farmers and landowners. They had set up a stall on the day we were there and were charging $1 entrance. I was part of an organized an event so I’m not sure how the gates and entrance fee will be on a regular day, especially a weekday.

There are a small sign and a Panama flag on top of the gates that lead up the hill and towards the main waterfall. On the way, you can make a few detours to the other waterfall and the Guacamaya viewpoint.

We continue straight down through the arches towards the main waterfall because we were solely here to go cliff jumping. What we saw was an epic waterfall that flowed down into a narrow watering hole. It was surrounded on three sides by steep cliffs and cascaded down into several smaller watering holes until it became a river further downstream. 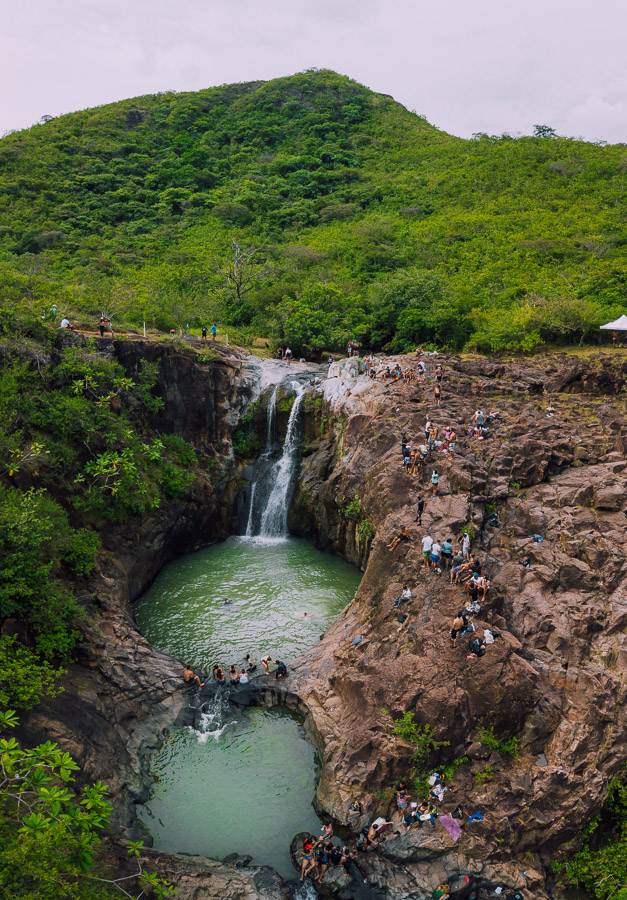 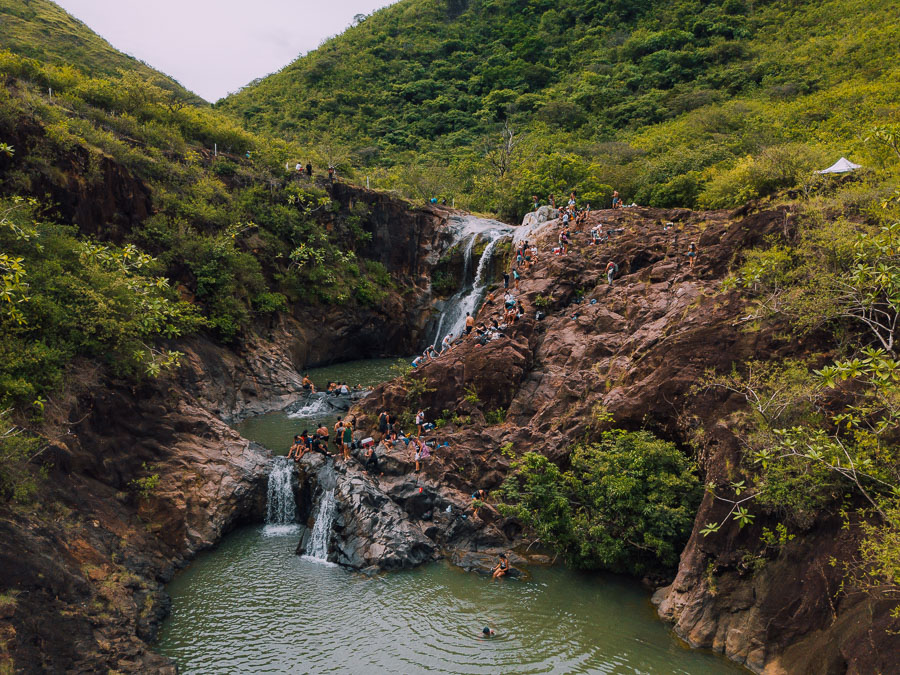 The biggest cliff jump is 15m and other spots are possible to jump from throughout the watering hole. The biggest factor to point out that this is not an easy place to cliff jump. In fact, the day I was there a guy almost died. He cracked open his head and broke his arm as he slipped and fell down the rock wall. The biggest issue is that on almost all of the jumps you need to clear some rocks on the wall below. It’s not hard but as we saw, mistakes happen and the rock wall is unforgiving. Especially on the big 15-meter jump, you need to run and really push off to reach the middle of the pool below. It is dangerous if you are scared and only do a small jump or back out halfway. Don’t take this place lightly.

This day wouldn’t have been possible without the friendly locals who invited me to the waterfall. There are lots of things you need to know before traveling to Panama but one thing you can count on is how friendly and helpful the locals are throughout the country. 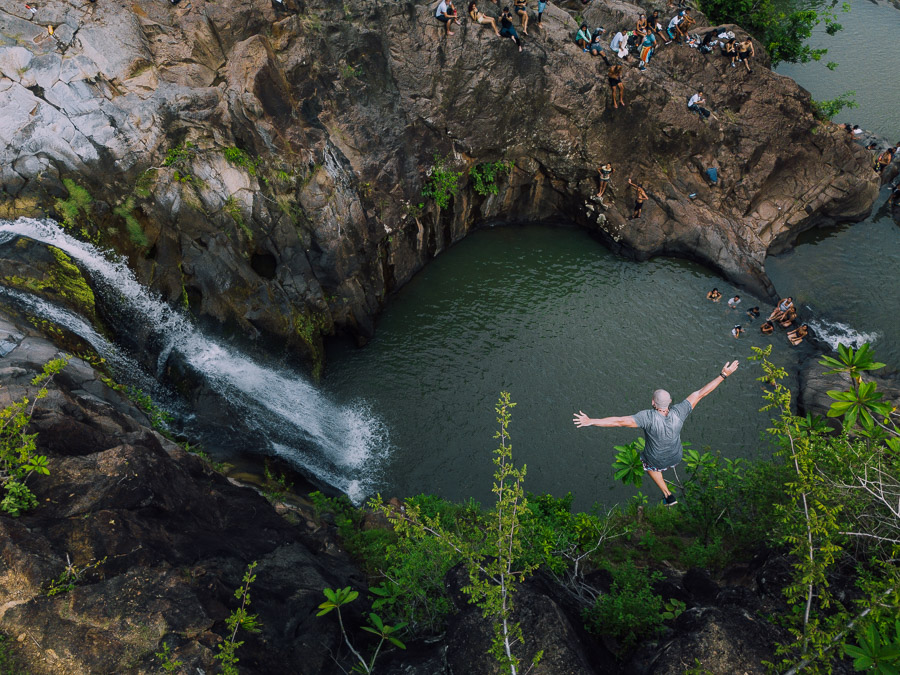 We jumped from the 15m multiple times and it is a pretty big rush. You take a few steps of run up and the best part is that when you begin the run up you actually can’t see the water so it is a blind of a blind run until you are in the air. That makes it much more of a scary jump than normal. If you get some decent air then you will always clear the rocks below by a lot. 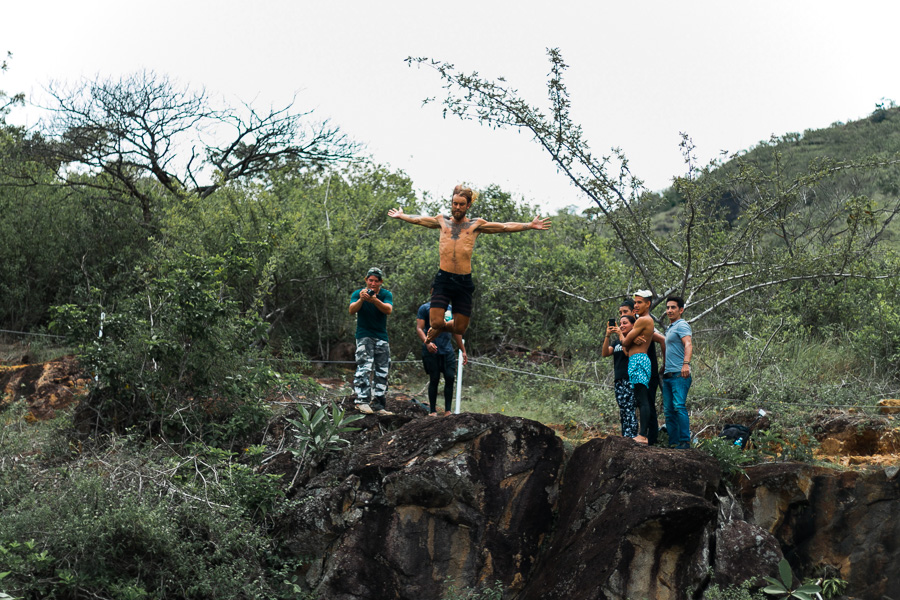 The second spot I loved was the opposite side with a little ledge for a backflip of about 7 or so meters. From here you could comfortably clear the ledge below. The place where the guy slipped and almost died was on the opposite side of the big 15-meter jump but closer to the waterfall. Many jumped there without a problem all day but just so you know this may be the most dangerous spot at the waterfall because there is no run-up and you need to clear the ledge below. One slip and you are in trouble.

If you aren’t keen to do any big jumps, there were lots of people just hanging out, swimming and taking in the sun. It’s great to sit at the bottom of the falls and watching people send huge jumps down from the top. 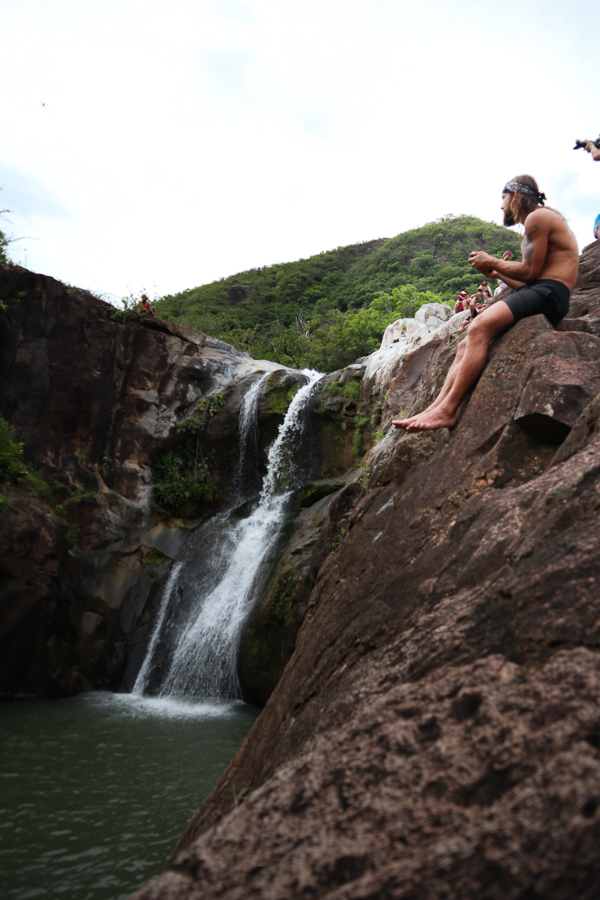 HOW TO GET TO LOS VALLES WATERFALL

The map below will show you where Los Valles Waterfall is. You can zoom in or out and get directions from your current location. I have also added a second photo below the map that shows where you should park and then if you look closely at that parking spot you can see a trail that leads directly all the way to the Los Valles Waterfall. 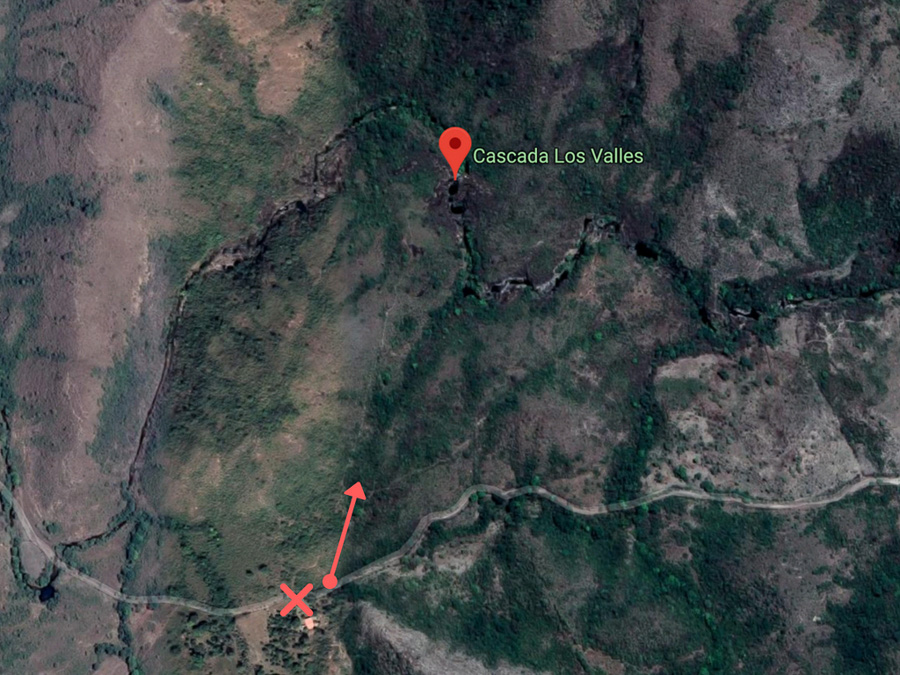 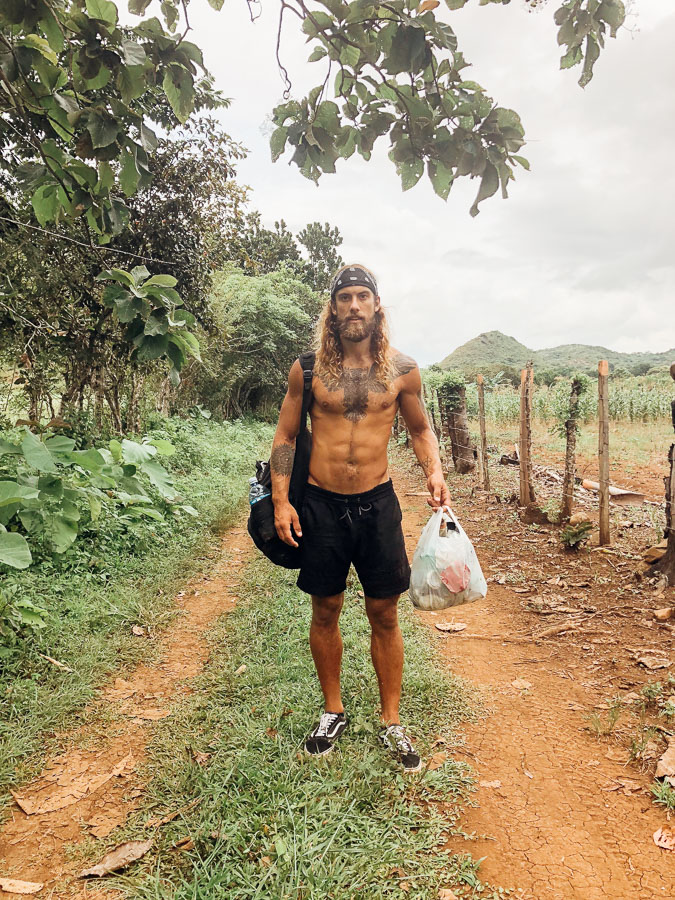