Djerbahood is a neighborhood on Djerba Island in Tunisia. Created by 150 artists from 30 countries, 250+ murals were painted to create a street art museum. This hub of street art suggests there is more to Djerba than sandy beaches and fancy resorts. 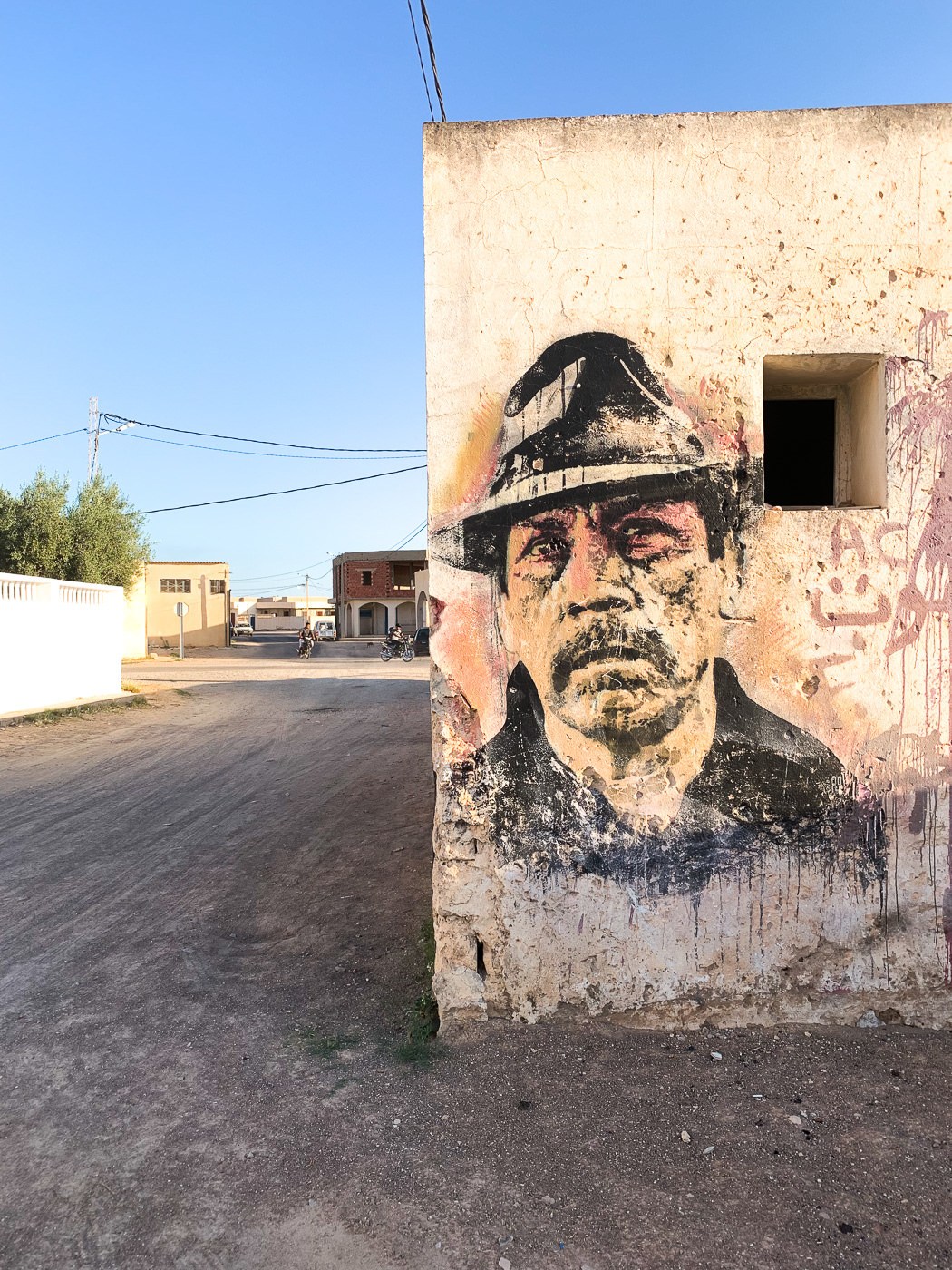 WHERE IS DJERBAHOOD AND HOW TO GET THERE

Djerbahood is in central Djerba, which is a popular beach destination on the east coast of Tunisia. There is an airport on Djerba or you can access via car (ferry to Djerba). Once you are on Djerba you can simply drive your car or take a taxi to Djerbahood, which I’ve pinned the location for on the map below.

The Djerbahood street art event kicked off in the year 2014 when 150 artists from 30 different countries came to the small village of Erriadh in central Djerba. They created more than 250 mural paintings using over 4500 cans of spray paint. The paintings were found on doors, arches, walls, and roofs.

The project was initially established by Mehdi Ben Cheikh, who is the director of the ‘Itinerrance de Paris’ Gallery in 2014 and continued on for a number of years. The name of the project, ‘Djerbahood’ came about after Rodolphe Cintorino installed giant letters ‘THE HOOD’ at the entrance of Erriadh.

The village has beautiful, traditional architecture, which compliments the art that is scattered throughout its narrow streets. Thanks to the project in 2014, Erriadh became a popular tourist destination.

Djerbahood had its peak moment in 2014/2015 when the project was in full swing. With 250 murals painted in the first year, the neighborhood was a buzz. 70 different magazines and news outlets covered the open-air street museum and hundreds of Tripadvisor reviews rave about the murals. However, I think the buzz may have died off a little.

A number of the murals are dilapidated as you will see below and on a hot afternoon on a weekday, we couldn’t find a single cafe or restaurant for any type of meal after the sun had set. Having said all of that it is still 100% a place you need to visit when on Djerba Island and there are even many murals, which are dated 2018 or 2019.

We took a taxi to Djerbahood and it seems all of the taxi drivers know the spot. They’ve dropped a few tourists there over the years. It’s a small island after all. When we arrived, I was not sure if the murals would follow a path/route or they were just spread out at random. We quickly found out it was the latter. However, there were so many and the streets were easy to navigate so finding them all wasn’t as hard as I had expected.

What Photography Gear do I use?

Do you want to know about the cameras, lenses, and different gear I use to capture my adventures? I’ve listed my four different cameras below but you can check out all my lenses, accessories, and favorite camera backpack in my article: MY PHOTOGRAPHY GEAR: WHAT’S IN MY BACKPACK

We set off in a random direction and slowly mazed our way throughout the entire village. We wandered through the beautiful architecture of the village, spotting new murals around every corner and discussing the controversial or political posters while admiring the more artistic designs.

Many of the murals are indeed just nice designs. However, a number of murals clearly carry a political message or are a depiction of life on Djerba or life in Tunisia. It’s pretty raw and it feels very authentic. There were only a few other onlookers on the afternoon we arrived.

I advise going about an hour before sunset so you aren’t walking around under the full force of the sun all day. It’s also when the shadows and golden lighting seeps through the vines and arches of the narrow alleyways.

We were hoping to have dinner at a cafe after viewing the murals as we assumed it would be a bit of a tourist spot. However, there was literally only tea on offer in the village so we had to get a taxi to Houmt Souk for dinner. It’s not an issue but prepare for only a small kiosk with water and chocolate bars if you visit on a weekday.

I took all of the photos on my iPhone as I casually wandered through the streets. Here is a selection of my favorite murals from our visit.