The Dead Sea is a lifeless body of water between Israel and Jordan. A searingly high salt level inhibits any life-forms calling the Dead Sea home. No fish, no insects or even plants can be found in The Dead Sea. The salt level, which is 10 times saltier than the ocean, is so high that it has become a popular tourist attraction to float on the surface. However, one defiant tree made us question if life in the Dead Sea was possible.

In Ein Bokek, near Arad, we were driving towards Mitzpe Ramon to explore the desert. Out of the car window, we spotted a tree out in the Dead Sea. It was seemingly floating in the middle of nowhere. We decided to stop and explore the area when we returned from the desert.

The Salty Tree in the Dead Sea

What we found was absolutely stunning and unbelievable. There was indeed a tree in the middle of The Dead Sea. However, it wasn’t floating at all, it was perched and rooted into a beautiful salt formation, which had spawned more than a hundred yards from the shore. We all began to question if this tree was real or was it a stunt from one of the nearby hotels to draw in more guests to their accommodation.

Two of the girls in our group decided they wanted to find out first-hand and began swimming out to the tree. Swimming in The Dead Sea is much harder than it seems as you cannot splash any water into your eyes or mouth or agony will ensue. The buoyancy also makes regular swimming strokes very awkward. It took the girls more than 15 minutes to swim out to the island.

Meanwhile, I was already flying high above them making an inspection of my own via my drone. As soon as I saw the salt formation, the inner pool of water and the tree itself, I knew this was a very special and very unique spot. I shot several images from different angles, sometimes flying only inches above the still water for the right perspective.

The girls arrived out to the salt formation island and hung out in what appeared to be a natural hot tub. The view from the salt formation looked back over the hotels, most of which housed guests who had no idea of what this spot actually looked like, which is a strange idea to be so close to such beauty and be totally unaware of its existence.

After over an hour of flying and draining multiple batteries, I landed and began to wonder about the origin of this tree. How can it grow when nothing else can?

HOW IS THIS TREE SURVIVING IN THE DEAD SEA!?

The tree was placed there or planted there if you like, by a local artist. Each day he paddleboards out to the tree and puts mud around the tree for nutrients. Essentially it is an art installation, possibly to shed light on the fact that the Dead Sea is slowly dying itself as its shoreline recedes every year.

Regardless of the motivation for the art, the scientists out there can rest easy knowing that there isn’t a new strain of tree capable of living in incredibly high salt levels. It was, as far as our knowledge extends, placed there and doesn’t seem to be thriving! All origins aside, the tree makes for an amazing centerpiece at one of the most unique bodies of water in the world and definitely worthy of a day-trip from Tel Aviv or a pit-stop on your way to Negev/Mitzpe Ramon. 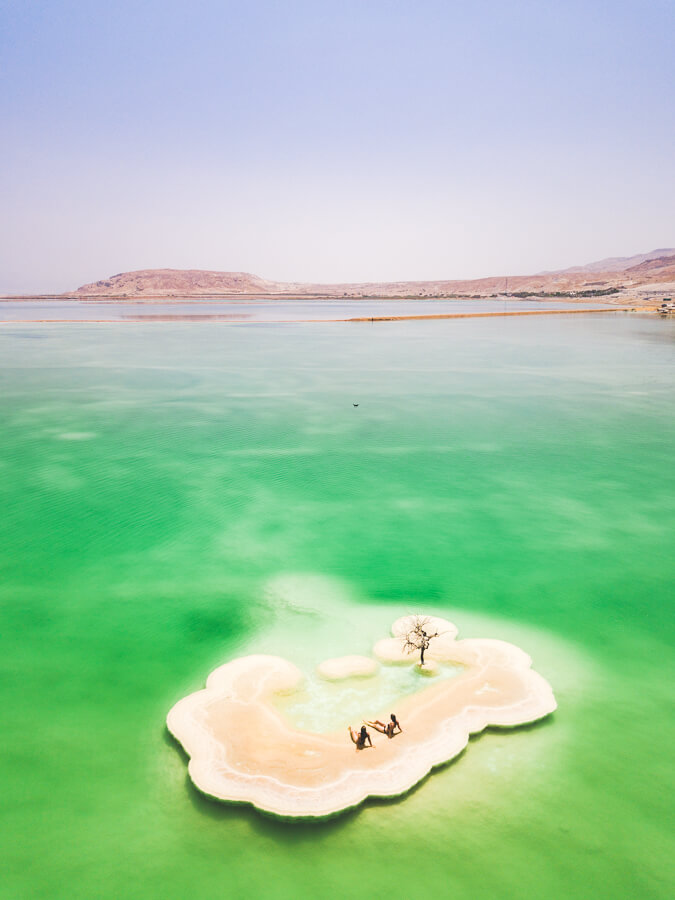 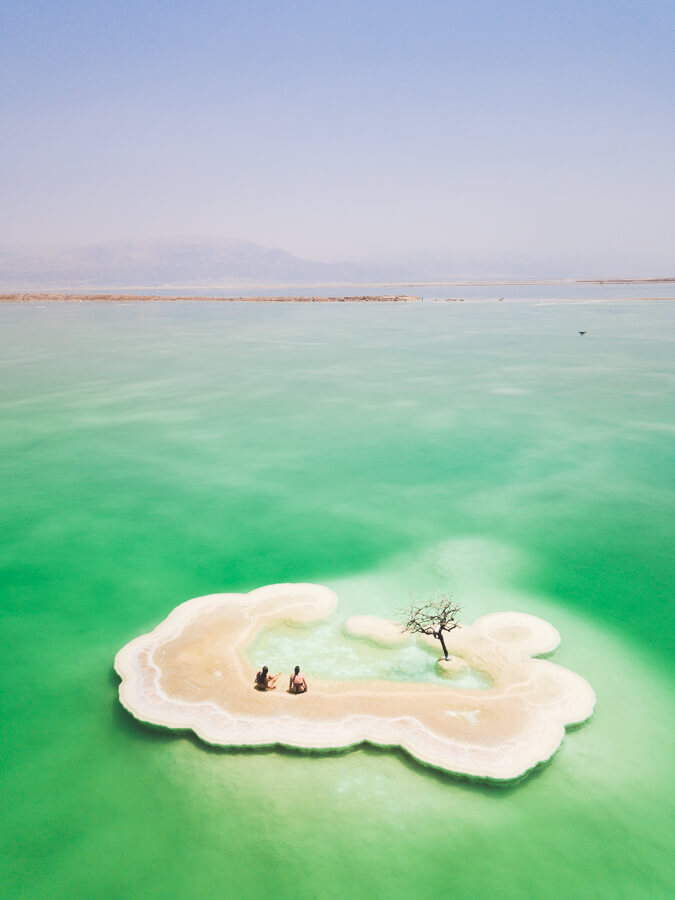 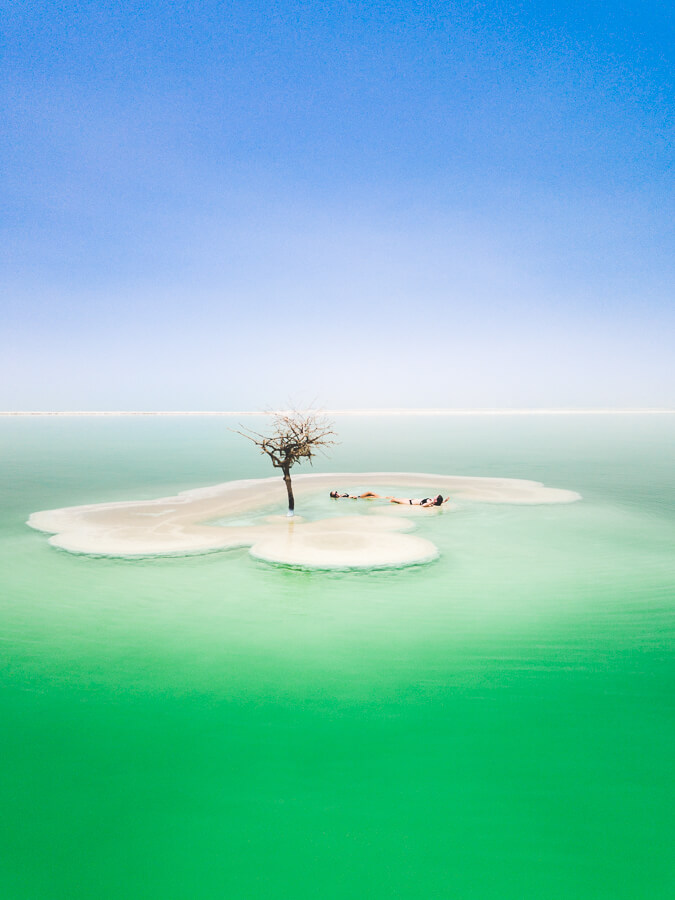 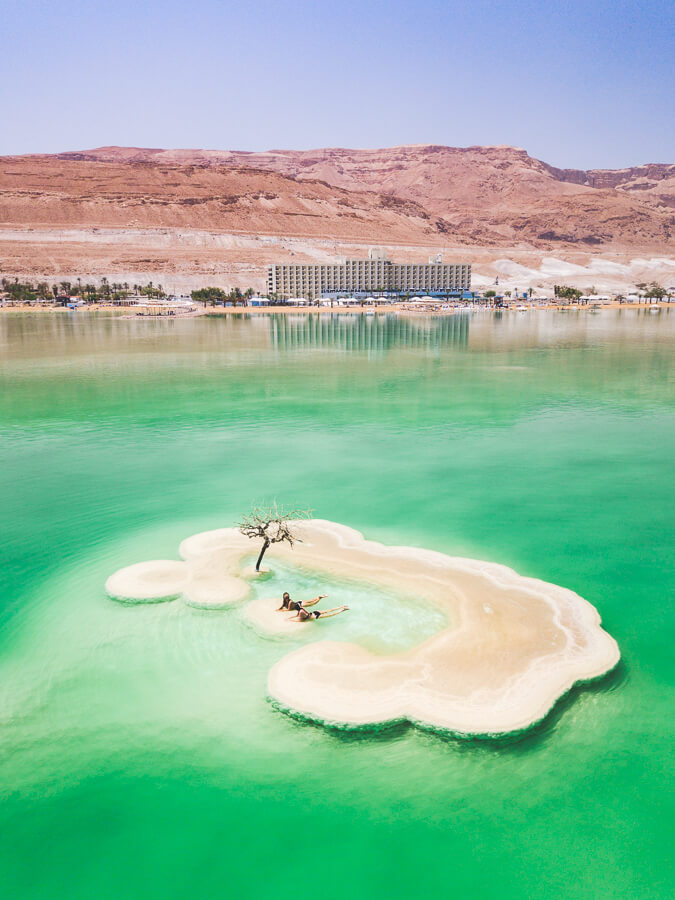 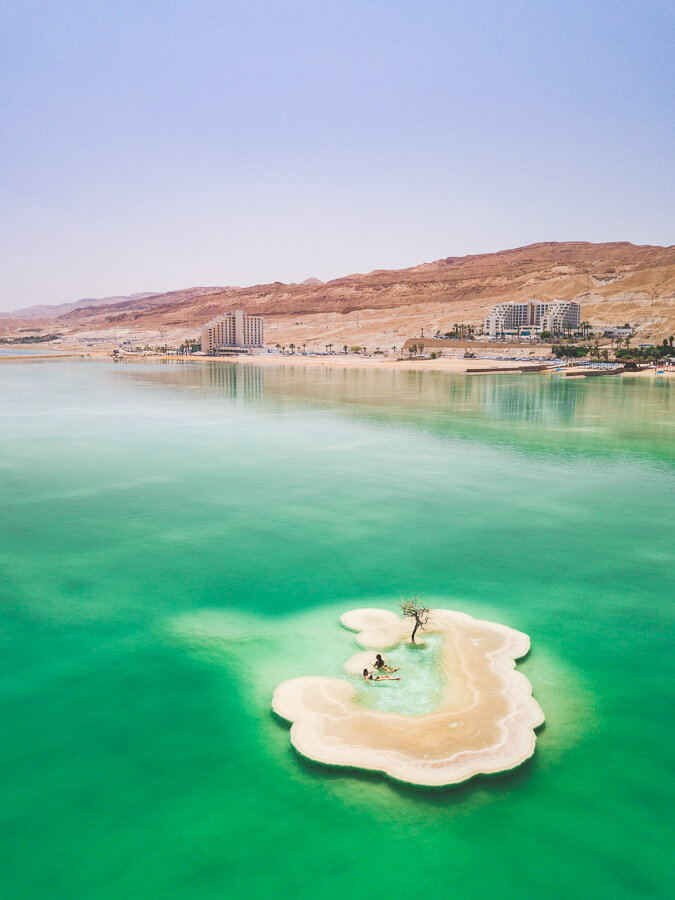 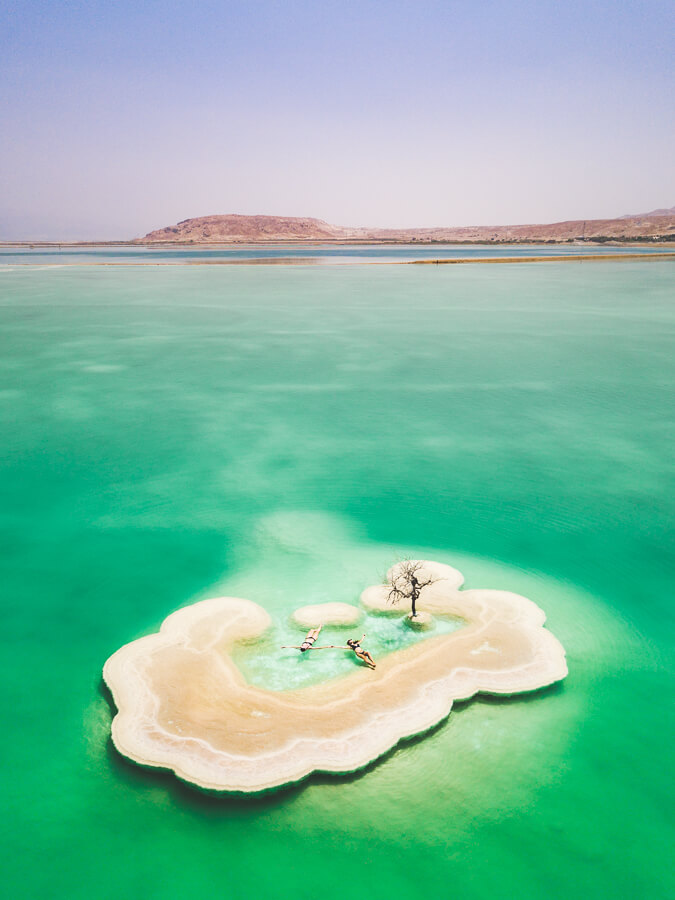 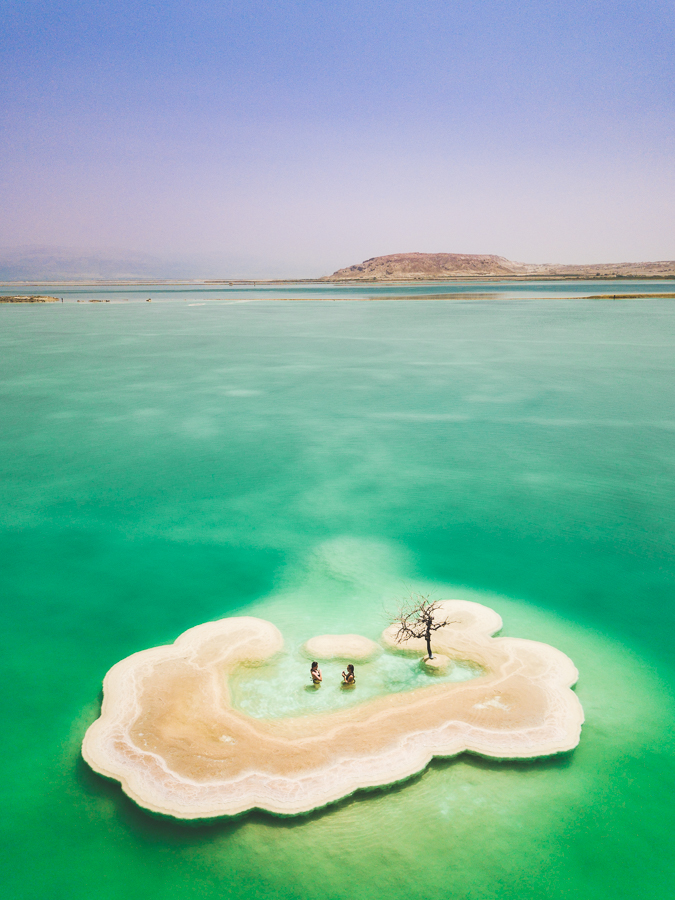 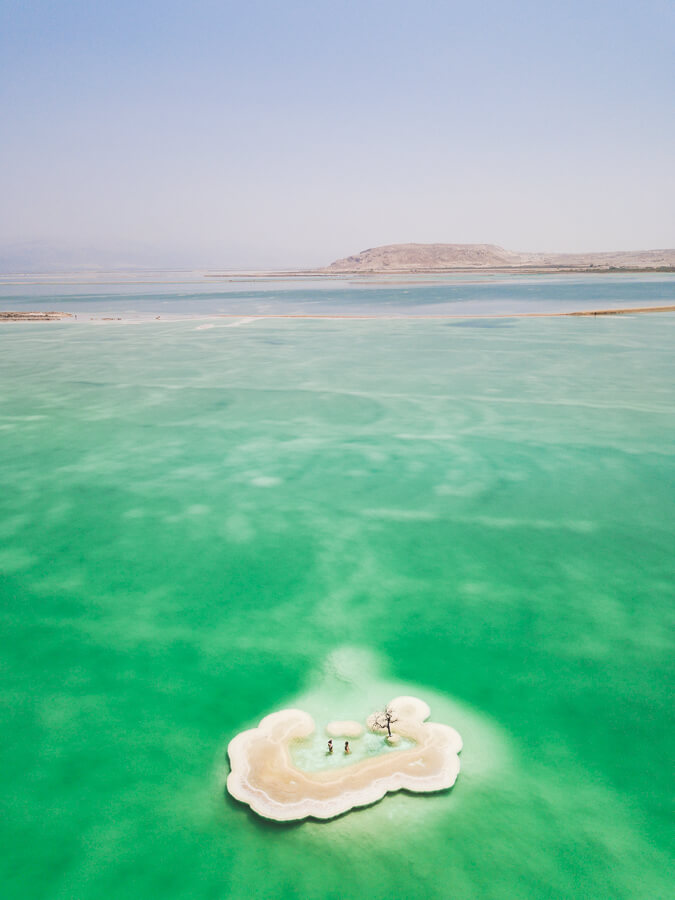 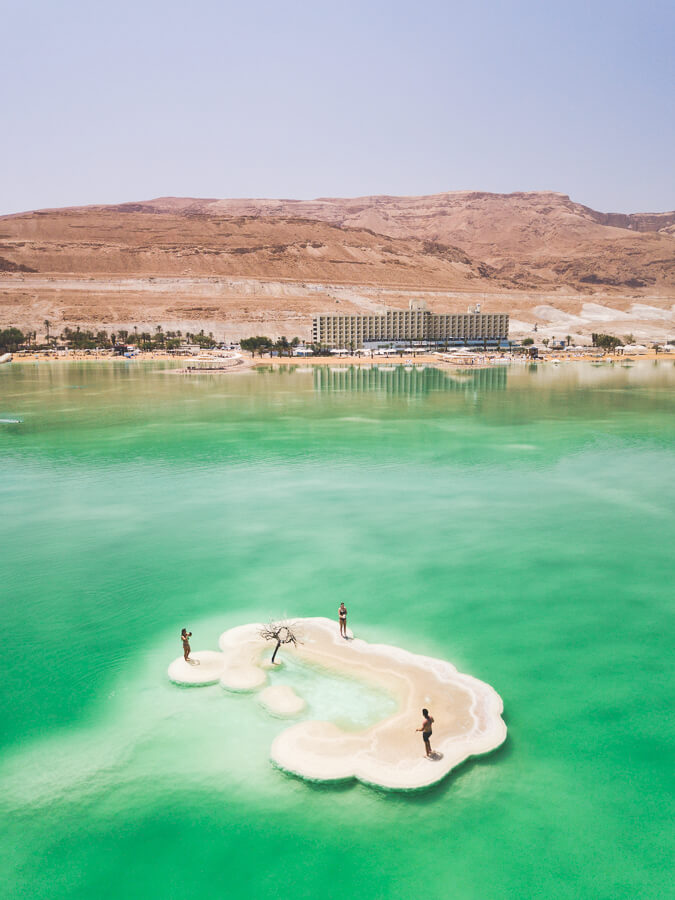 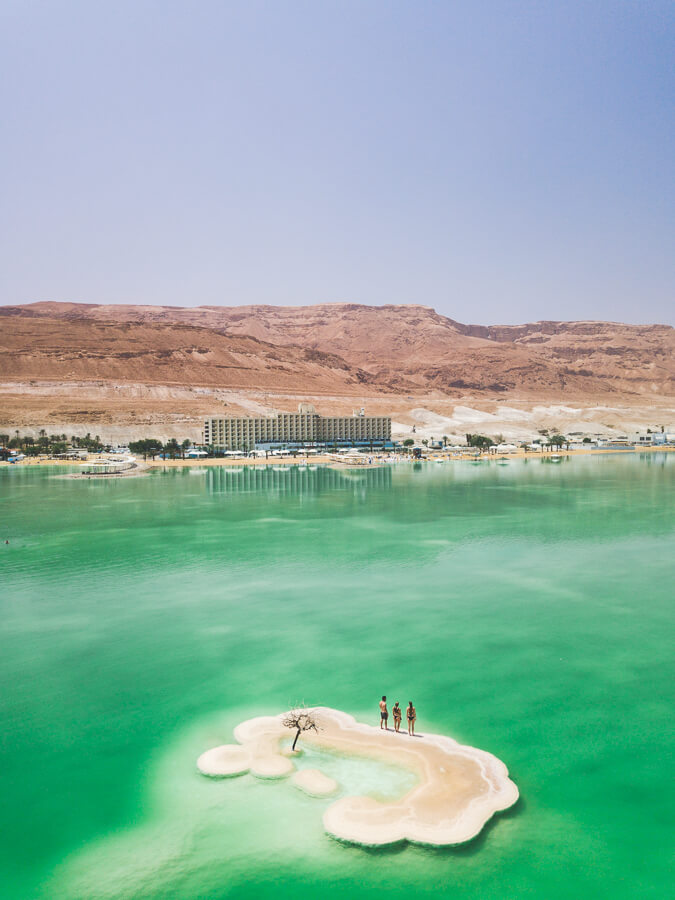 How to get to the Salty Tree in the Dead Sea

The Salty Tree location is pinned below if you want to go check it out for yourself.

Hi - Awesome blog! Did you get approval from Jordan to use the drone? How long did the approval take? Also, which drone insurance did you go with (Jordan requires insurance now)? I would really appreciate your input!

[…] The odd chemistry ends in the appearance of some impressive, but moving, salt crystal formations. In shallow pools at periodic intervals, these formations are natural works of art, billions of energized atoms in complex geometrical formations shaped by nature into novel works of crystalline art. […]

Is the marked location correct ?

By the way Love it From india

Hello From which beach would it be the fastest to swim?

You actually think a tree grows there?