When you hang out with Josh and me for a while, you quickly come to realize one thing. We often head off an adventure underprepared, without due preparation and just with a general lack of understanding of what we are about to be in for. Siargao Island was no different.

After talking about running around the island, we downgraded to simply cycling around the entire island on mountain bikes. Most would still call that outlandish, but we felt it was quite basic logistically compared to running around the island. To make things more interesting we decided to add in an entire day of island hopping up north, carry all of my camera gear, and do it during the 3-day period the typhoon was coming. When people ask me what I do for a living, sometimes I just want to say… this.

The plan was to set off at 5 am and arrive at San Benito (45km away) to begin our island-hopping day at 8 am. We weren’t sure how long it would take us as we were on mountain bikes, not road bikes. Luckily they had 21 gears so they could move but still, they had heavy, thick tread. They weren’t meant for doing 30km’s an hour for extended periods.

We packed the absolute bare minimum. Toothbrush, spare t-shirt and shorts to sleep in and of course lots of camera gear for myself including the drone and Sony mirrorless. I wanted to shoot the island hopping. 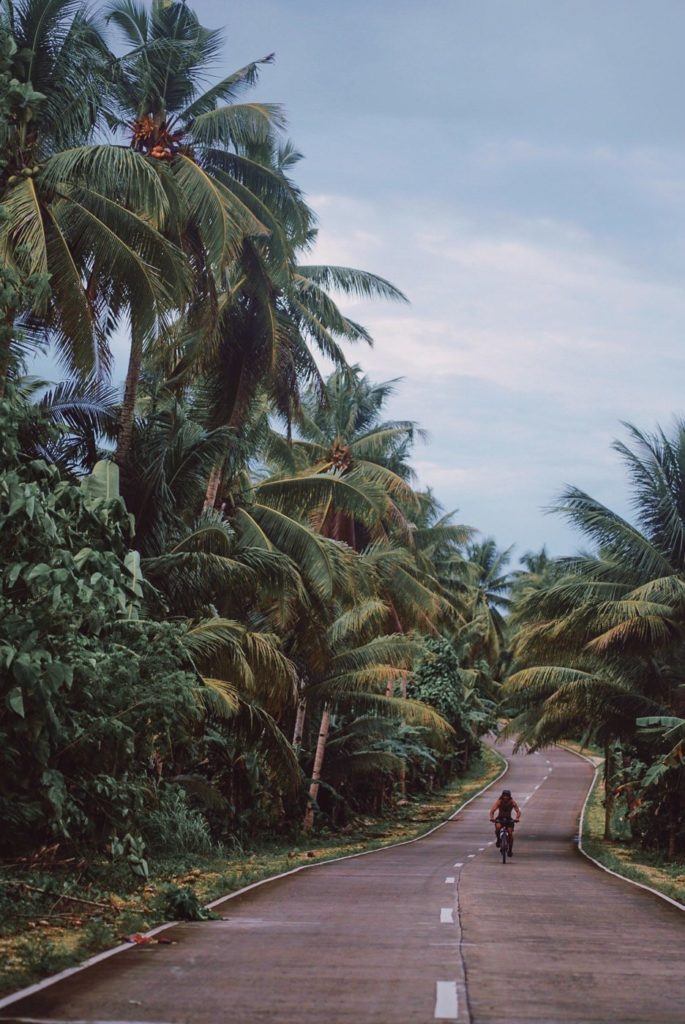 We ended up making it up to San Benito in just under two hours after making some solid time. We passed through lots of local towns and villages along the way. Honestly, watching their confused and happy faces as we rode by was great entertainment. We threw out about three hundred ‘Good Mornings’, and arrived in San Benito tired, hungry but pretty damn happy.

The only breakfast we could find, in this very non-touristic town, was a bakery. We must have ordered about half of what the lady had baked for the day, overestimating our hunger by quite some. It seemingly put Josh into a food coma as he fell asleep shortly after on the floor of the tourism office as I organized the day of island hopping. 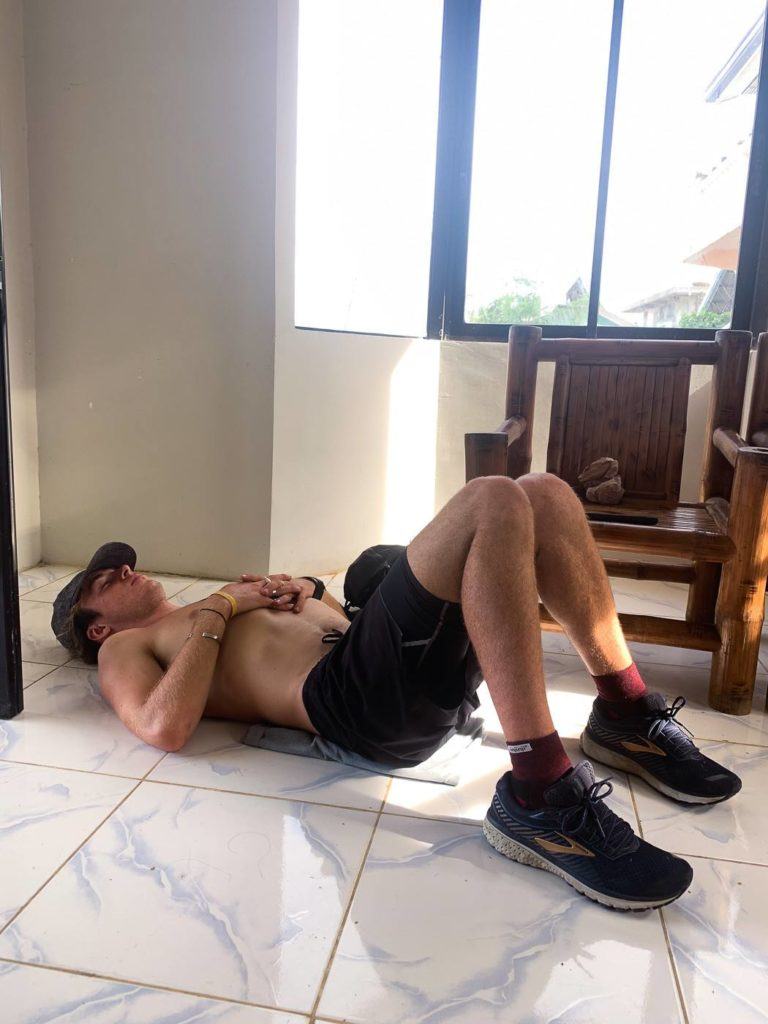 We headed out to Poneas Island to find a hidden lake, which was incredible. No other tourists were around as we hung out on the rope swing and took in the serenity of such a grand place with just four of us exploring. Well, Josh was asleep again. This time he’d passed out in a hammock and the early start had given him a rough start to the day. He would recover. 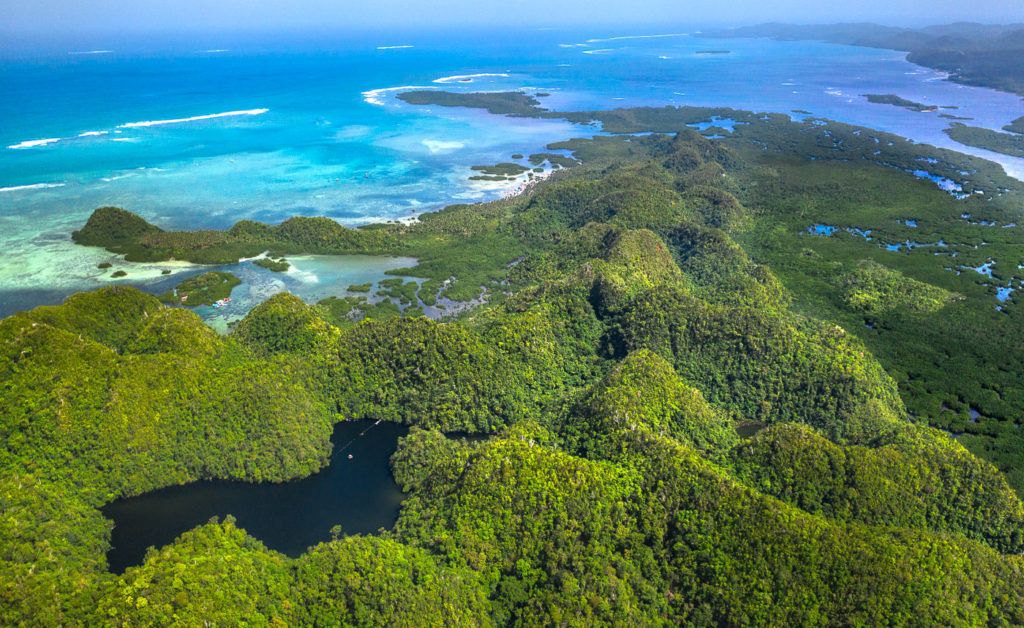 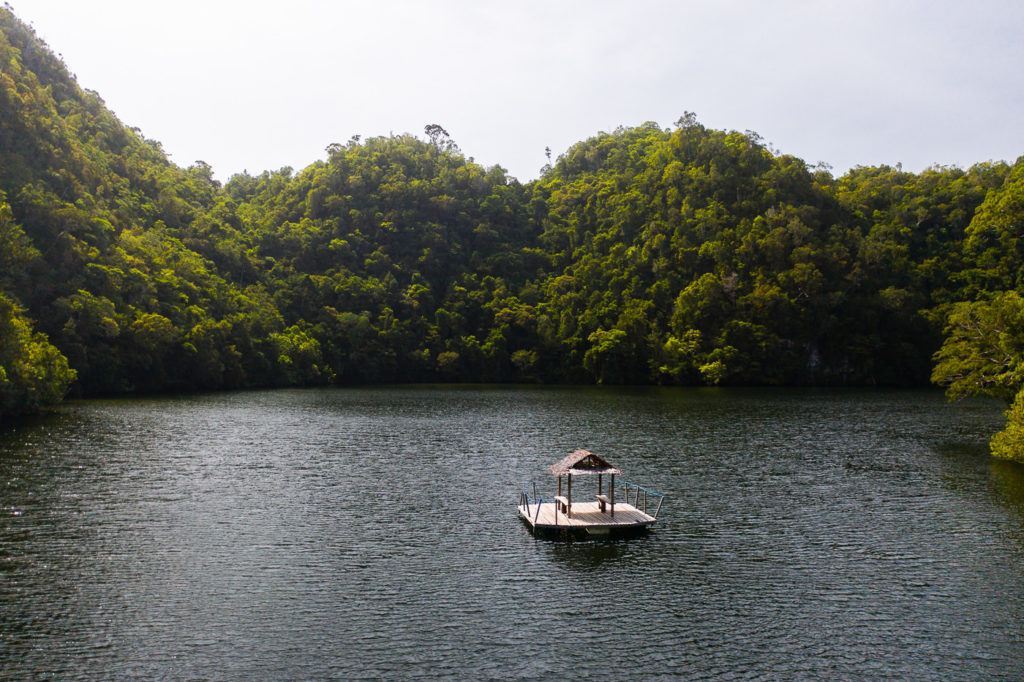 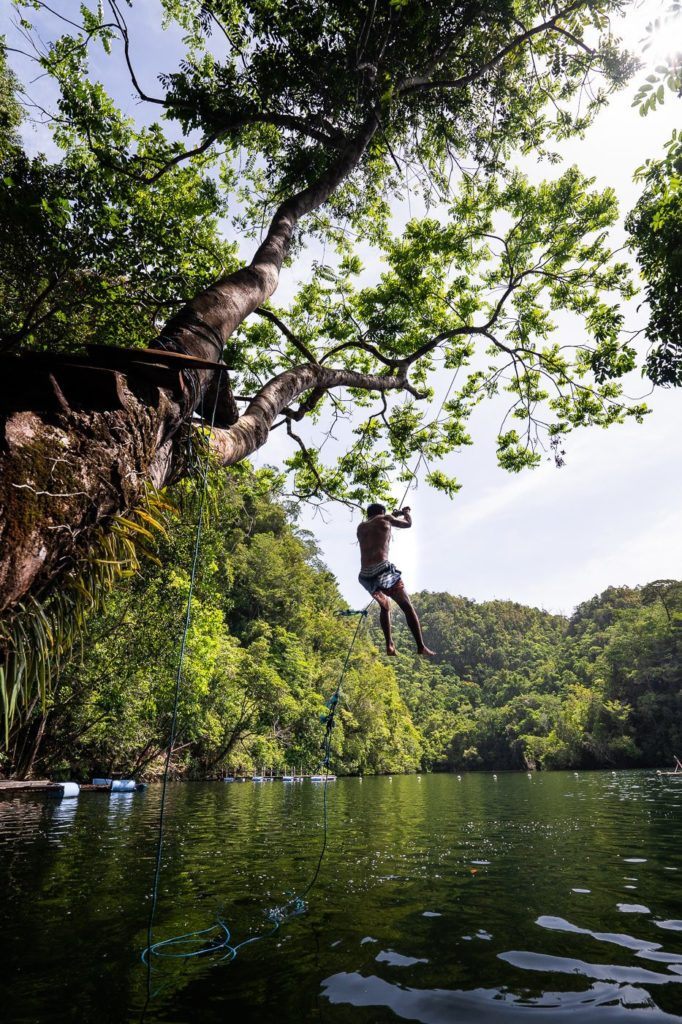 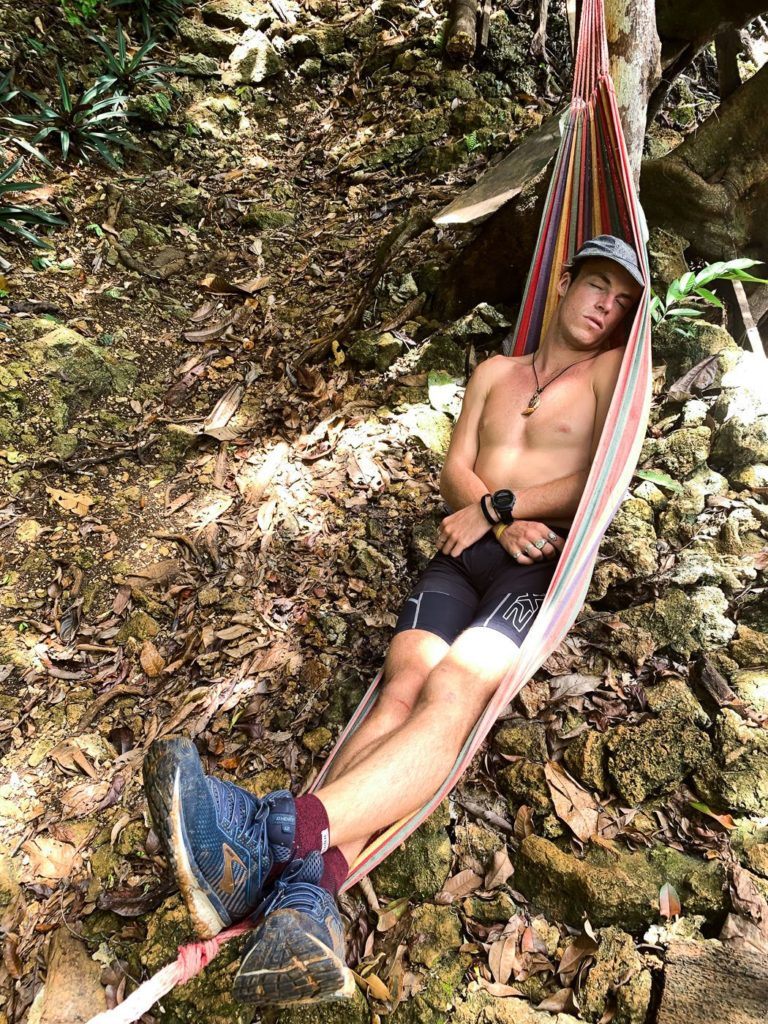 We went on to explore two more islands throughout the day in this beautiful yet very quiet part of Siargao. The full blog post with all the details, more photos and descriptions of Poneas Island and the Island hopping can be found here: DISCOVER THE HIDDEN LAKE OF PONEAS ISLAND, SIARGAO 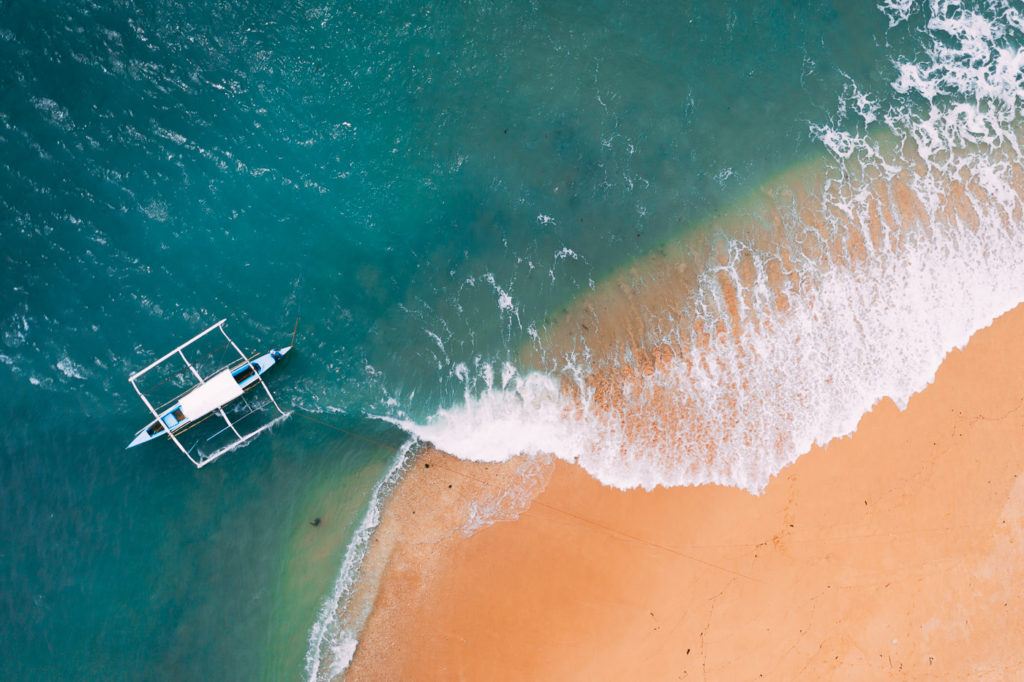 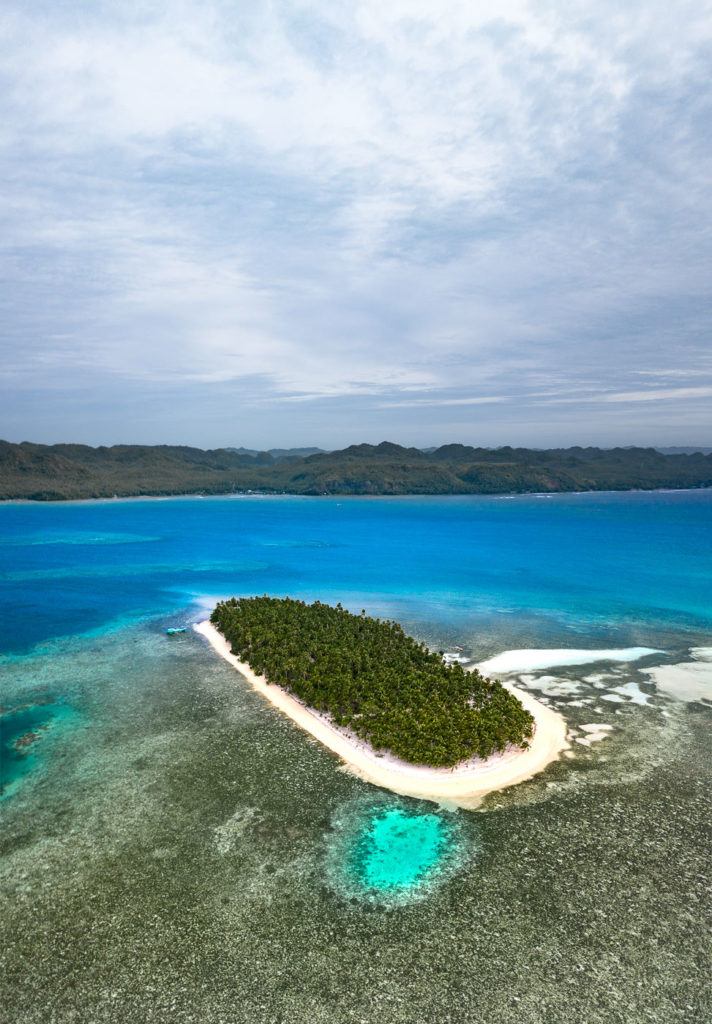 We arrived back to San Benito at around 4:30 pm, which meant we still had an hour or so of light left. That was lucky because we needed to ride a further 20-kilometers up to the northern tip of Siargao and then down to Burgos. We had rented an Airbnb for the night in Burgos called Lokal Stay. Without any issues, we cranked out another 20km as the sky turned pink and the waves seemed to power up as if to say the typhoon would be arriving tomorrow.

After a good sleep at Lokal, we opened the door to a downpour, which had hammered us throughout the night. Tackling the rain we made it down to the Lokal Cafe for breakfast. With rain smashing down all morning we sat undercover eating and drinking our way through the morning as the worst of the typhoon rolled through Siargao. Luckily for us, we had booked two nights in Burgos.

Buzzing on coffee, we waited out the storm at Lokal until things finally started to clear up. With a break in the rain we jumped on our bikes and rode 10km down to Pacific to watch some of the biggest surf I’ve personally seen in Siargao. Just a few local riders were keen to tackle the waves and they pulled off some really nice runs. We sat out at the Pacifico Beach Resort taking it all in until just before sunset when we rode 10km back to Burgos and rolled into Lokal Cafe for dinner. 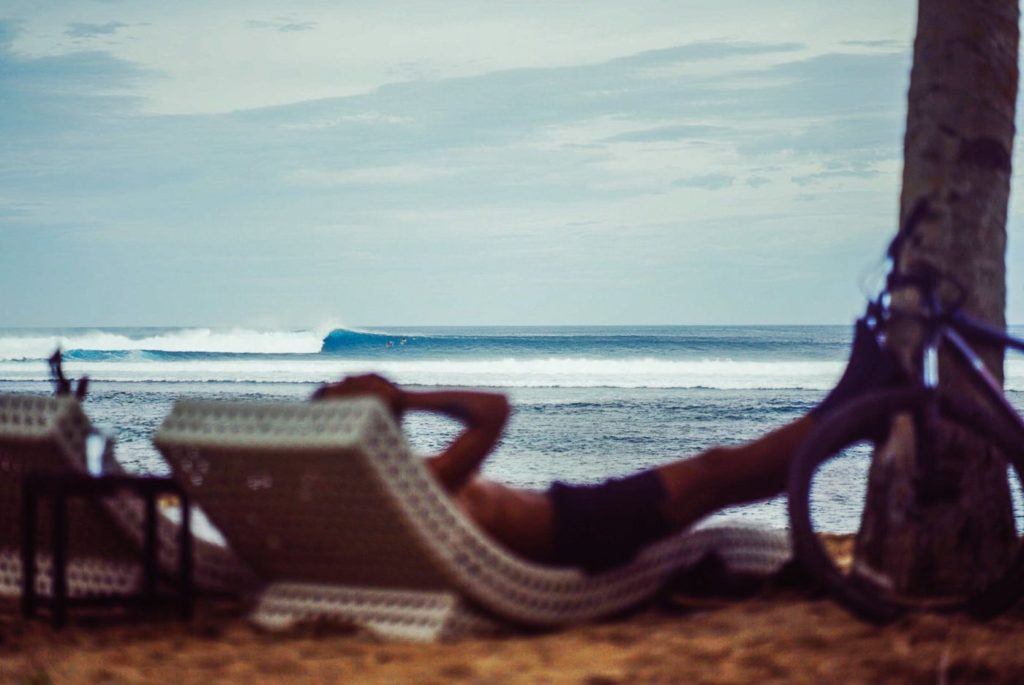 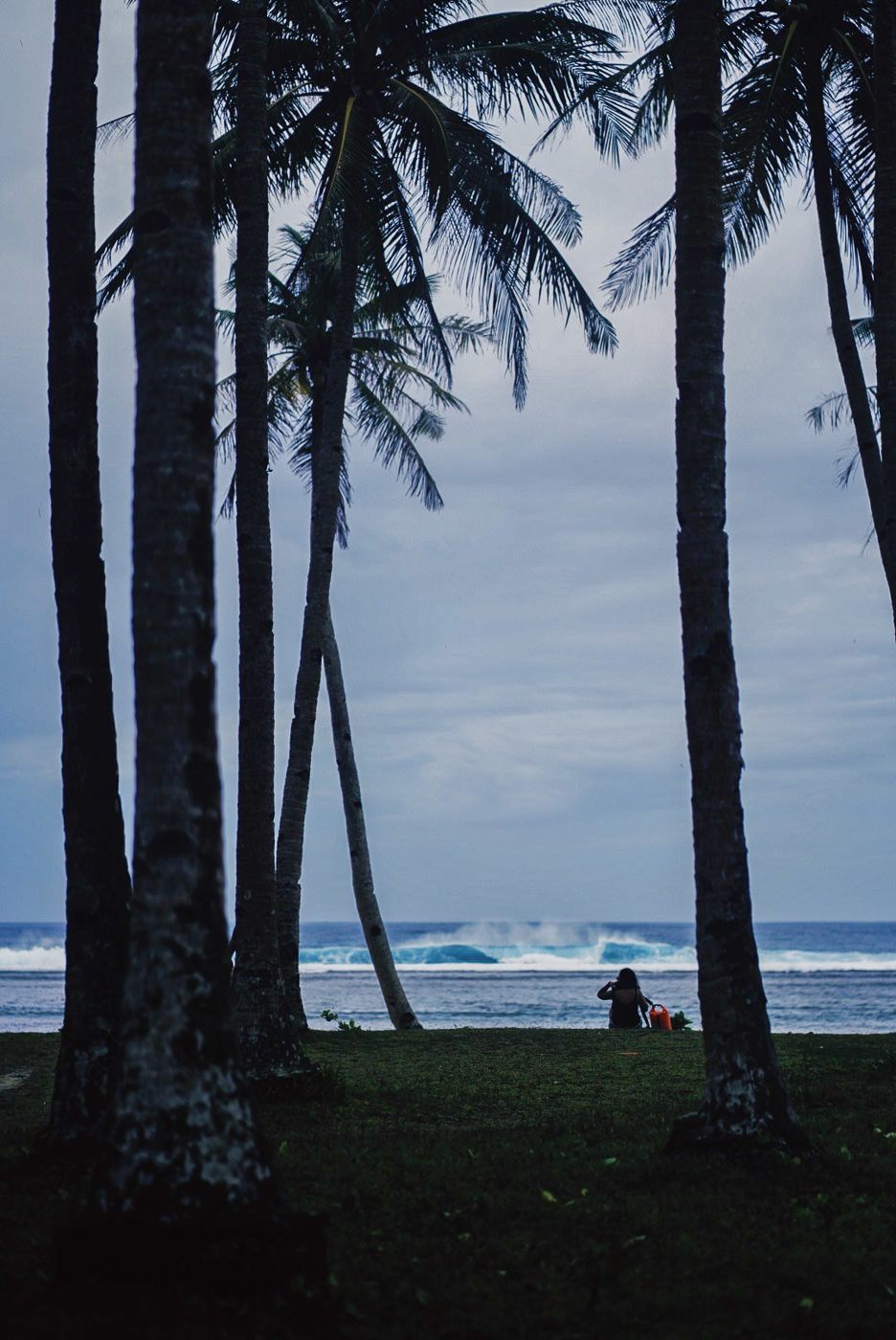 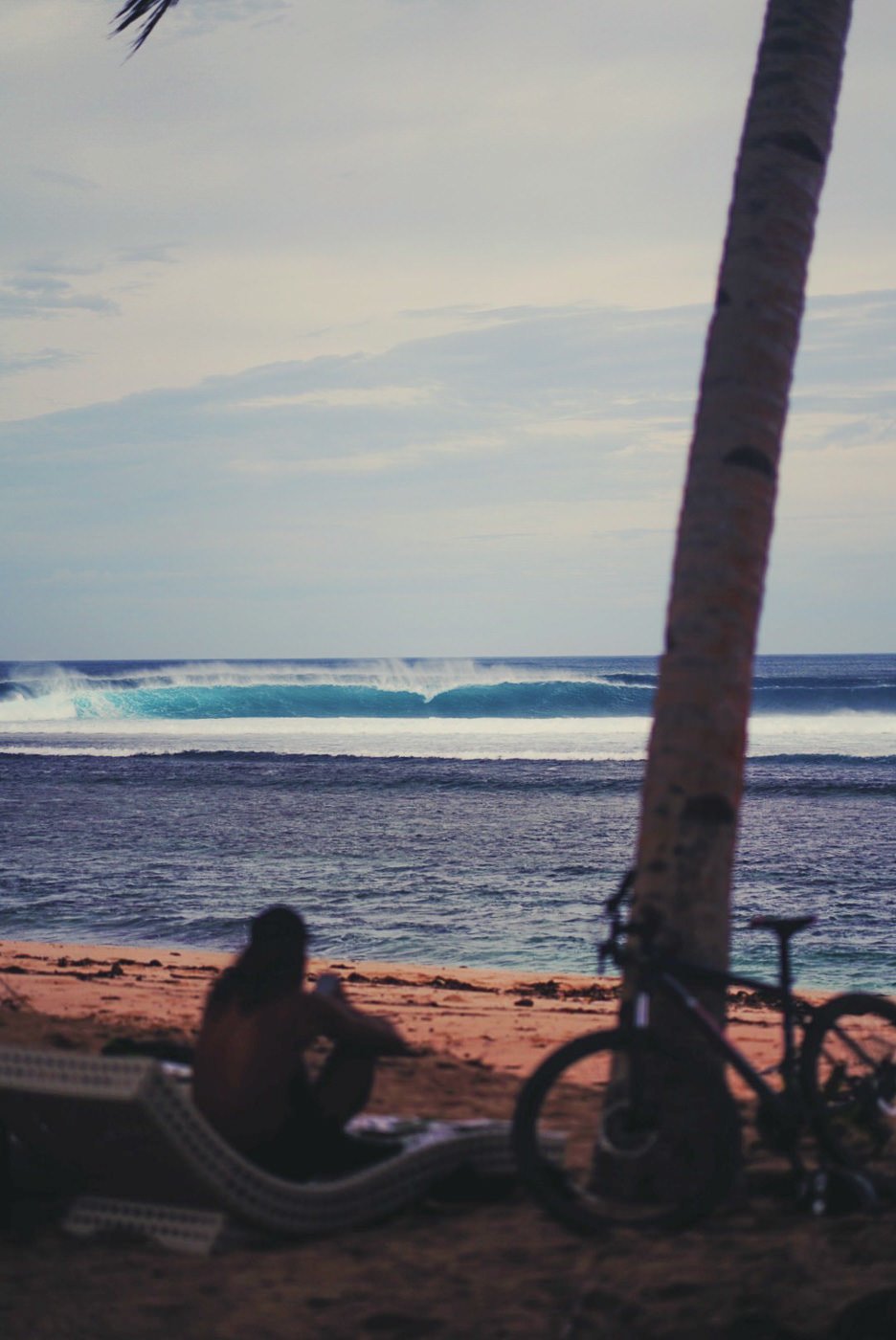 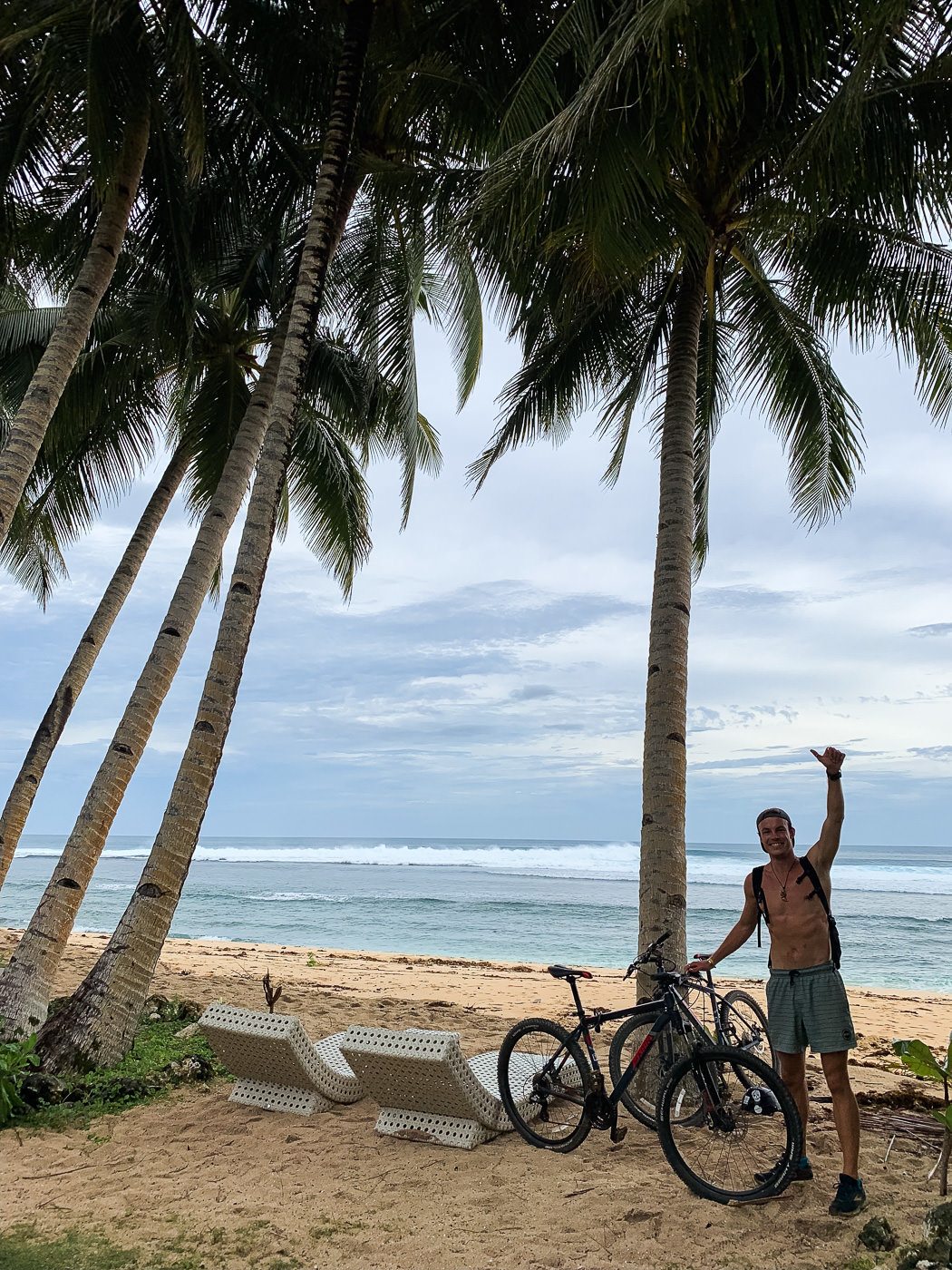 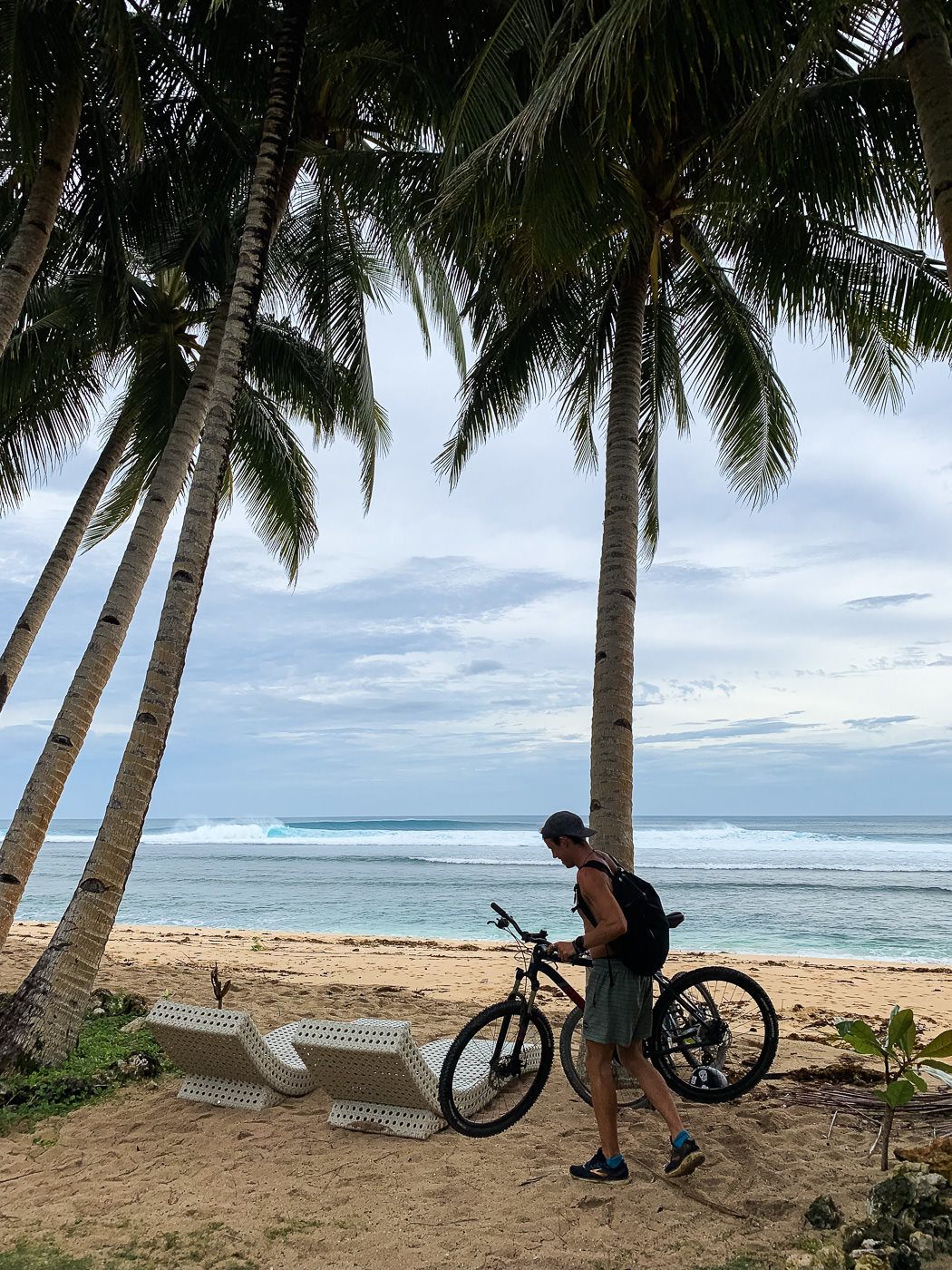 It seemed as if the entire community was out to play that night. I joined in with the street games and we led around 30 kids through a number of games and the buzz was alive in Burgos! 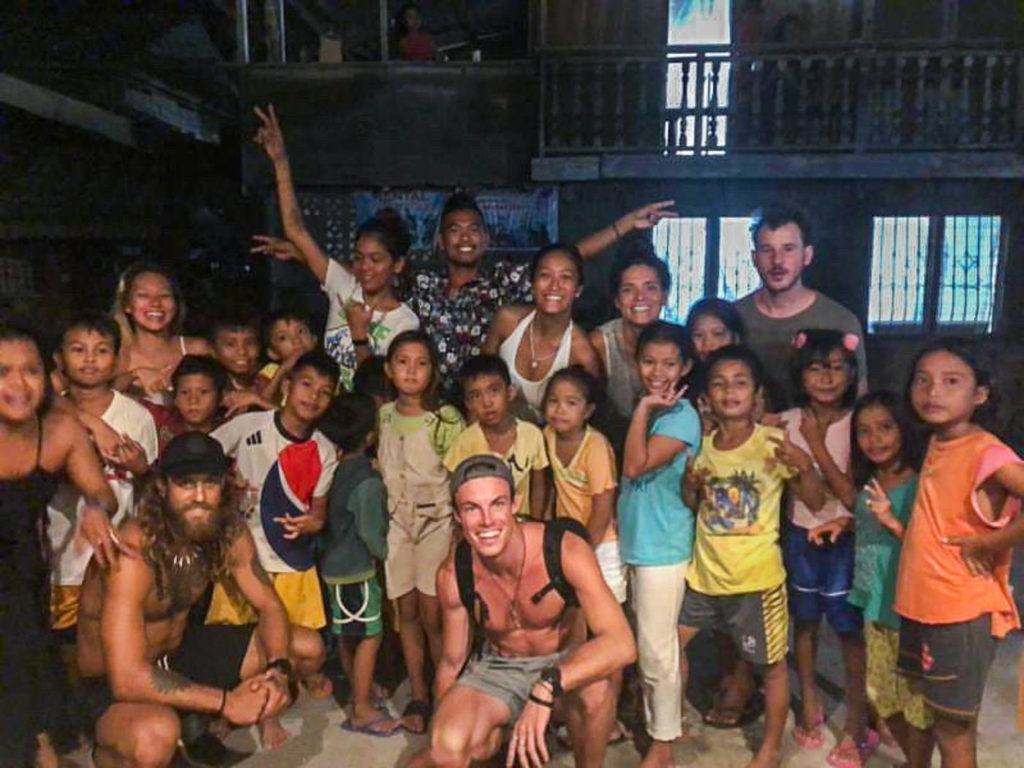 The next morning, we woke early. Early enough to catch an amazing sunrise as we rolled out of Burgos at 4:45 am. We had 65km to bank back to General Luna before our free-dive course started at 8:30 am. We were maximizing our stay in Siargao that was for sure. 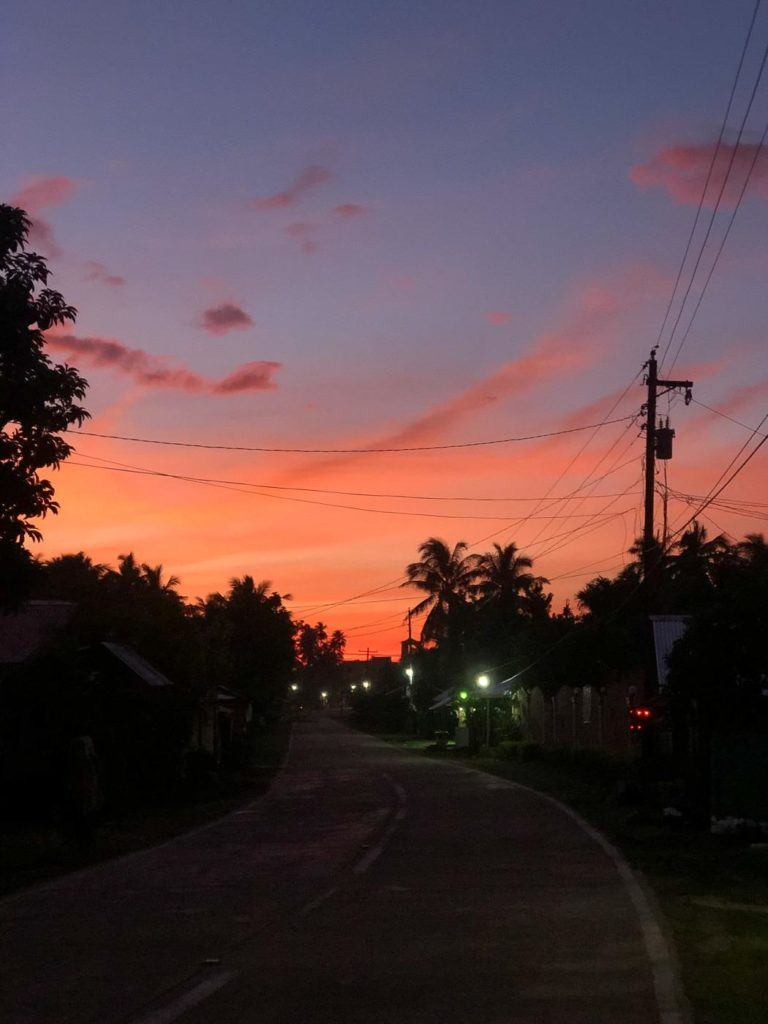 The ride back wasn’t easy but we cruised throughout without major event. Some of the roads on Siargao are just so damn scenic. Everything is covered in the green of one form or another and often a scene seems staged. A straight road or a dramatically winding road, with palm trees covering both sides so that you cannot see anything else than the huge draping leaves on either side. It’s just something else.

We made it back to Shaka Cafe in General Luna in 2 hours and 15 minutes for 65km’s, which was a pretty good shift on the mountain bikes with decently heavy bags. I can’t recommend riding to Burgos and back if not the entire island if you are up for a challenge. You can book a night or two at the towns along the way and really enjoy Siargao for what it is, not just party every night in General Luna. Get out there and see what the island looks like beyond the tourist town. 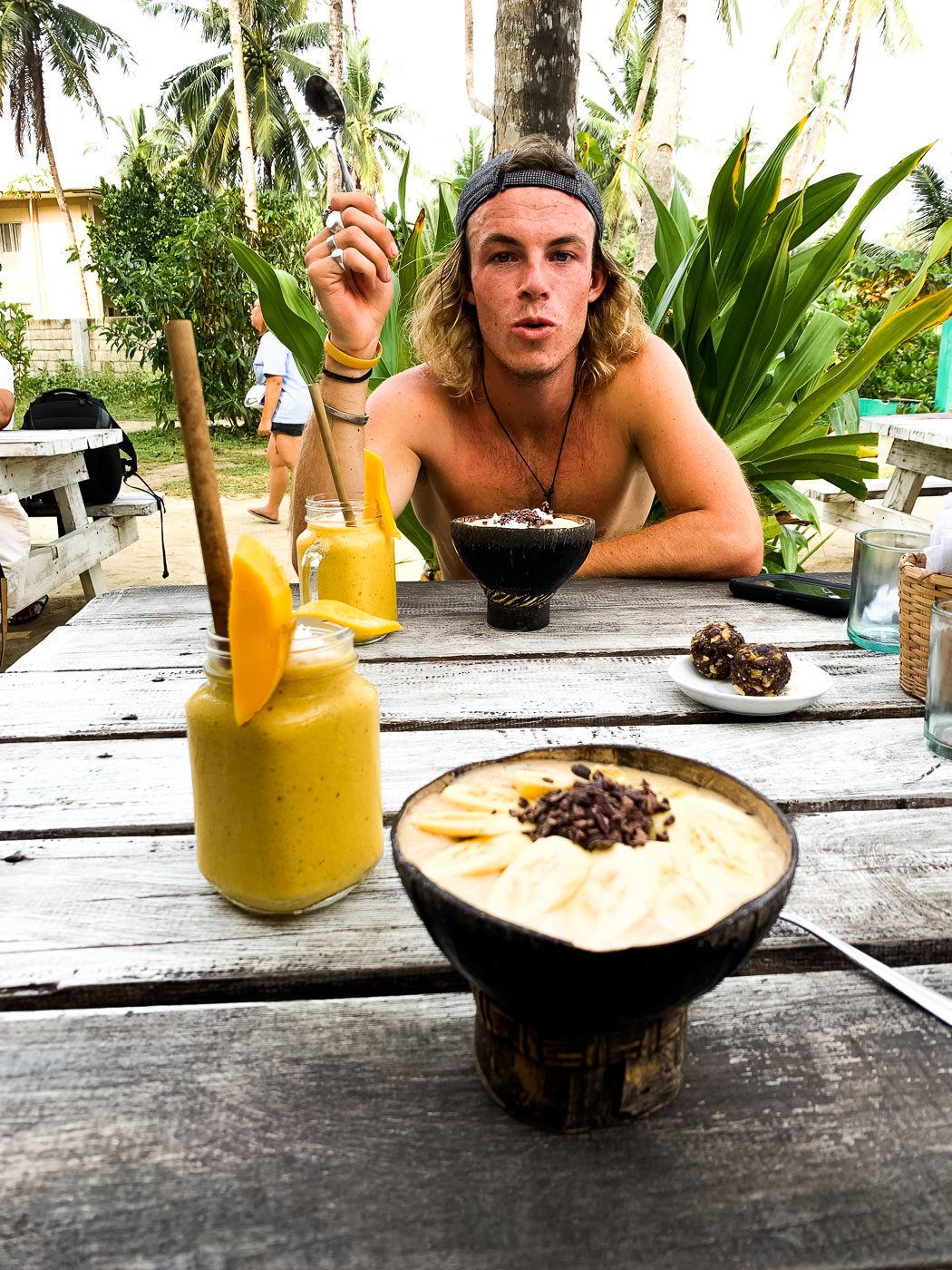 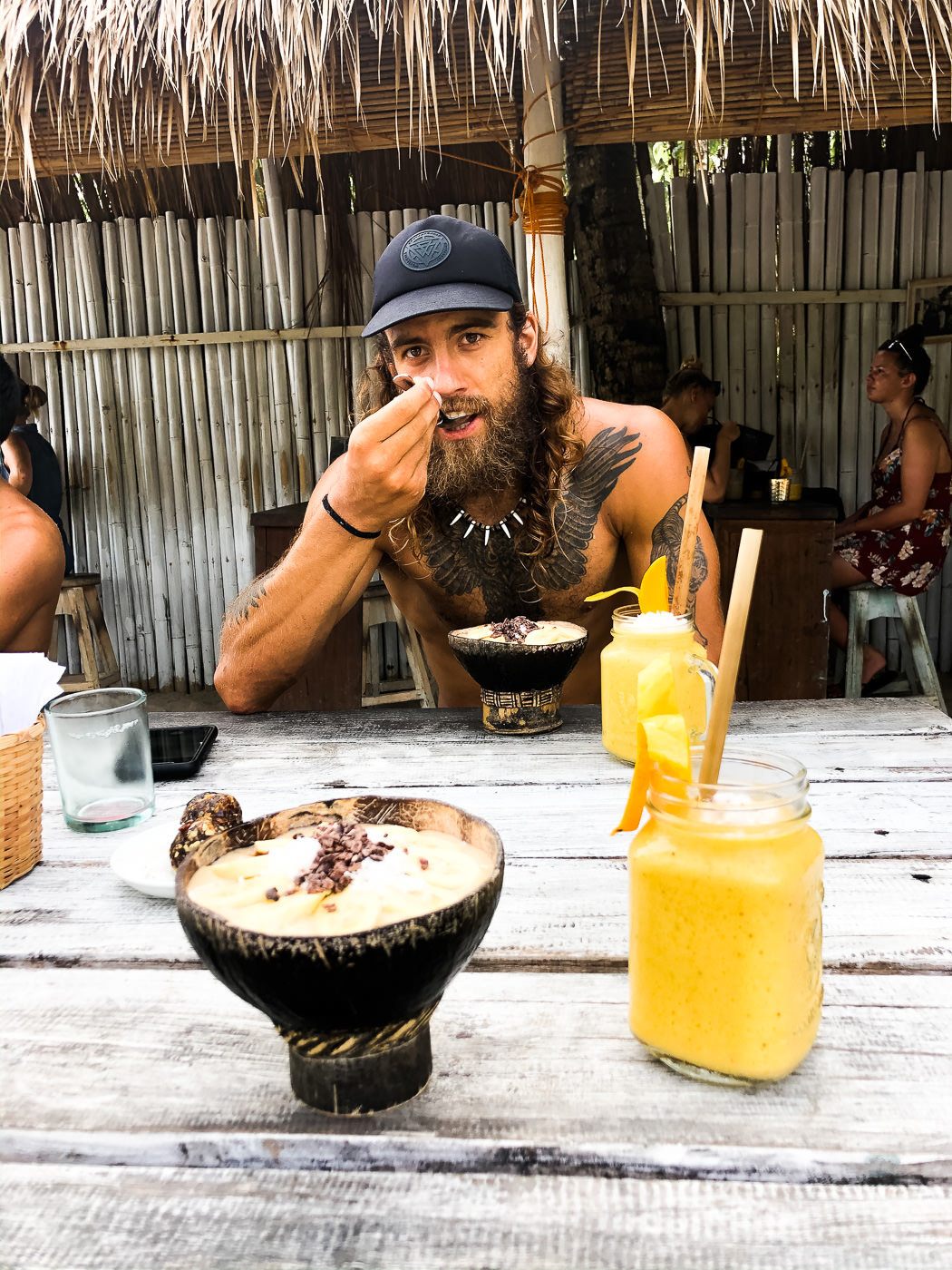 If you are interested in renting a bike, the only place I could find that had decent bikes with gears was The Greenhouse. They had four bikes like the ones we used but they were 500 pesos a day. A moped costs 350 pesos a day. So you are doing it for the adventure not for the budget!

I hope you enjoyed that little recap and the photos of Josh in dreamland.

Amazing pure nature! love your pictures of the island!!

Definitely enjoyed this. Great writing on this one. Siargao is such a cool little island. I can't believe you rode all around it; well done!