Bermejo Waterfall was a scene of beautiful destruction. As I sat atop a wet rock, alone in the amphitheater of Bermejo, I could only envision the events that had unfolded over the years to leave this magical place in the state it remains today. Boulders the sizes of houses are covered in moss with trees growing readily from their surface. Freezing cold water swirls viciously, inviting you to test the danger. And then there is the waterfall itself. A multi-tiered, dual-directional flow of pure aggression, which slices through the earth in the middle of the Santa Fe Jungle with an exclamation point.

I began the day from Hostal La Qhia, my base for a week of adventures in Santa Fe, Veraguas. It would be another day of solo adventures as I slung my bag on my back and headed out of the front gates. I packed some water and snacks and had my photography gear and a rain jacket in my heavy backpack.

The total distance from the town center of Santa Fe to the waterfall is supposedly 3.3 miles, which is 5.3km. That would make the journey a 10.6km round trip. However, as I will detail in this blog post, there will be a detour on my journey.

The hike begins on a road, which is a little frustrating knowing you can drive the first portion of the trek. But this is DIY, so off I set. Following the trail on maps.me it was a largely uneventful but peaceful walk into the trailhead. The most action I had was when I met a horse on a suspension bridge. The trail is quite steep and begins to get muddy even before you reach the actual trail. 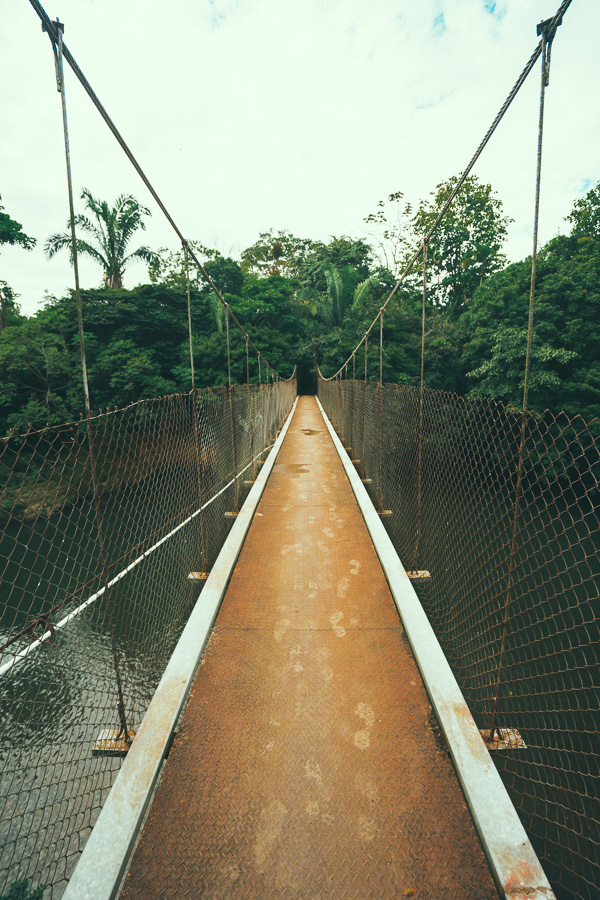 After crossing the suspension bridge and rounding a few calf-burning hills, I made it to the official trailhead. It stated that there would be 1.3km to the waterfall and also had some pictures of leopards that had been seemingly photographed in the area. Interesting. 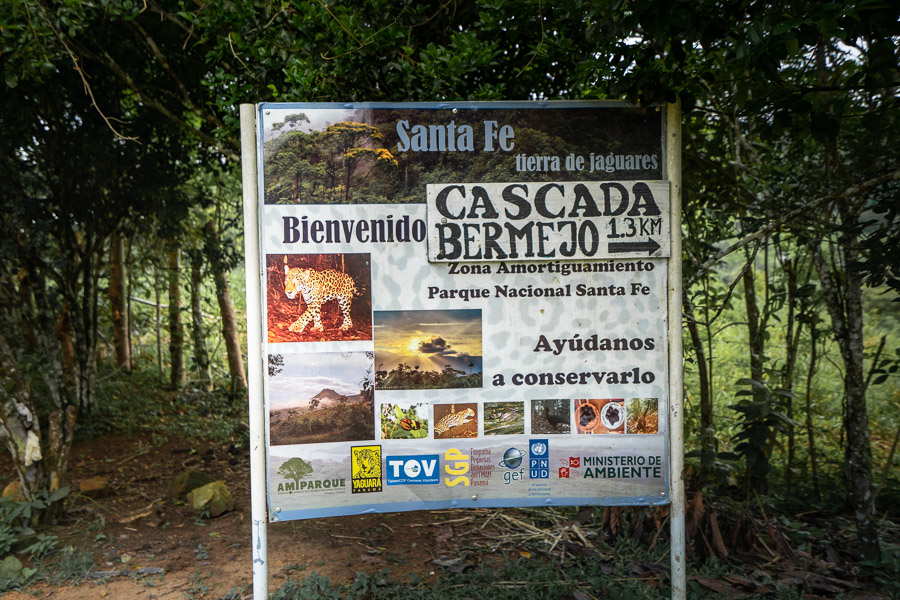 The trail became very muddy. So muddy in fact, that I gave up on keeping my shoes dry very quickly. Once my ankles were submerged in thick, orange clay it was game over. 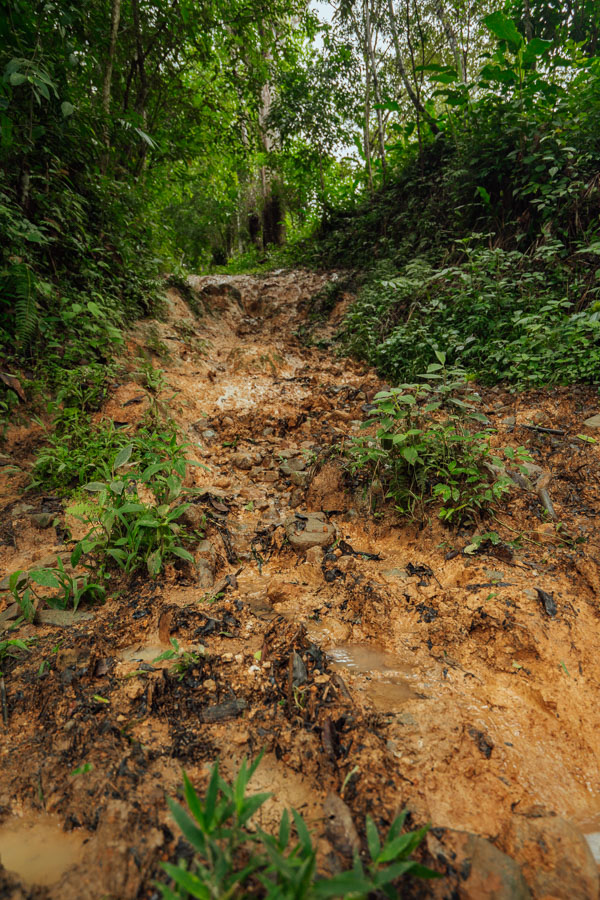 The humidity rose and my pace slowed. There was a defining moment. A fork in the trail. The waterfall could be heard to the left but I thought I would stick to the straight trail. This turned out to be a mistake but an adventurous one. If you want to visit the waterfall you need to take this left. 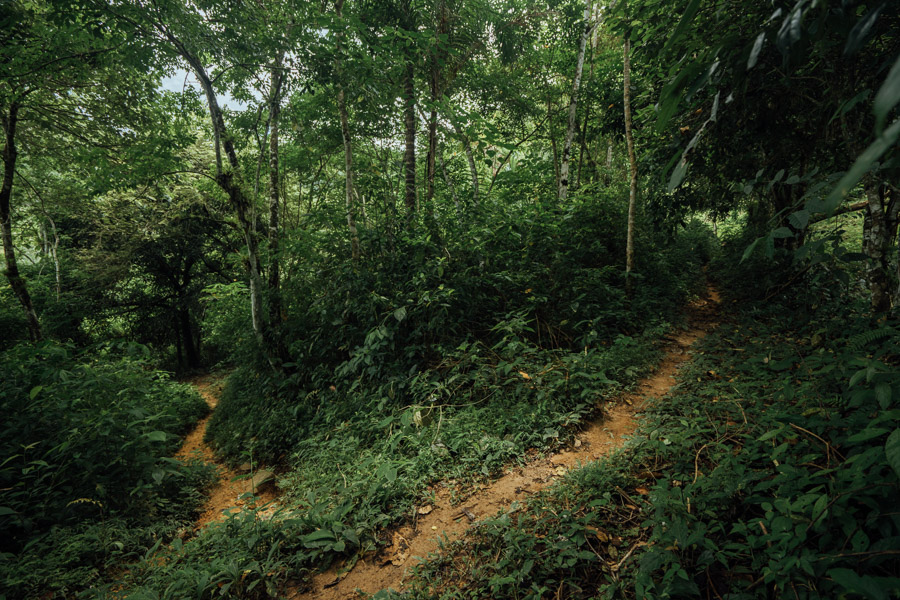 The straight trail leads me to more or less nothing but it was still a nice walk, albeit quite strenuous. Through the mud, I trudged up the hill hoping to find a secret viewpoint or a pot of gold. What I found was a barb wire fence and a dead-end after 45 minutes of solid trekking. I decided to hop the fence but the trail became so dense and muddy I called it a day. I had also scared a huge herd of cows. I sat down on a dead tree, on the middle of the bare hill. The cows watched in amazement or fear as I launched the drone after my lunch-break. I had a quick survey of the area and flew over the waterfall before deciding to head back.

I arrived back to the fork in the road and this time took the right turn (which would be the left turn as you originally approach it from the trailhead). The trail was once again very muddy and worn but nothing too crazy or dangerous. It flattened out next to the river and I believe a Toucan flew out of a tree. It was the same tree where I found this giant butterfly calmly perched upon the trunk. Wildflowers and exotic fruits lined the jungle path as the roar of the falls grew louder and louder. 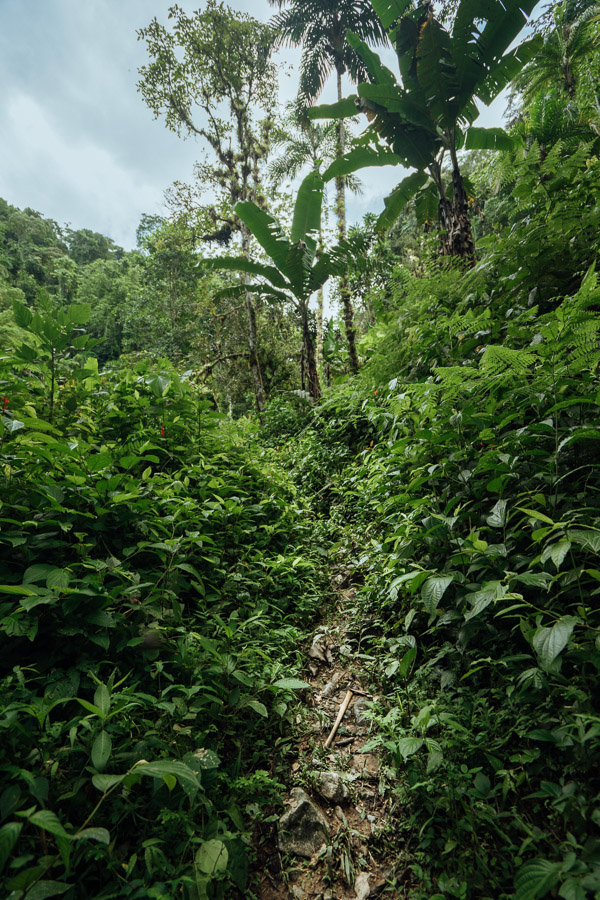 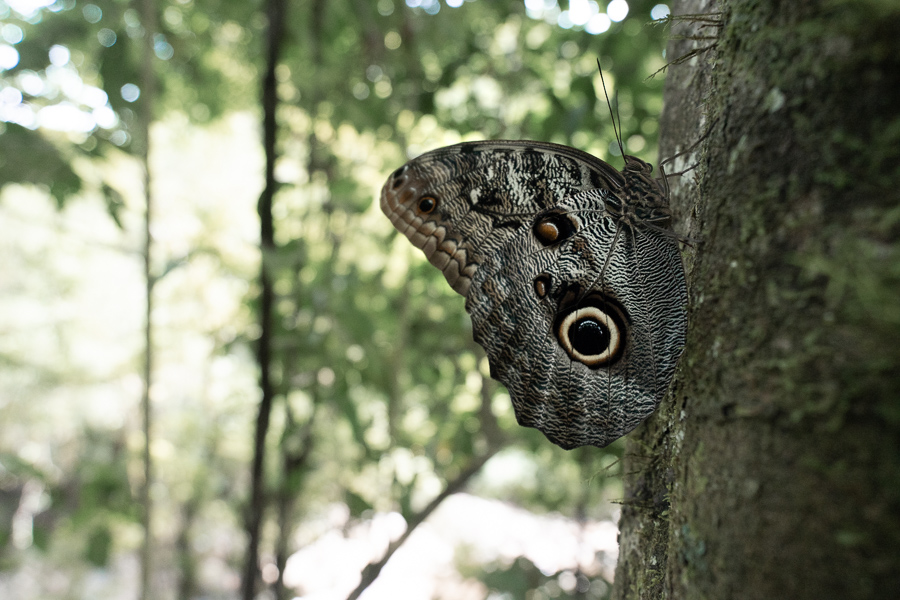 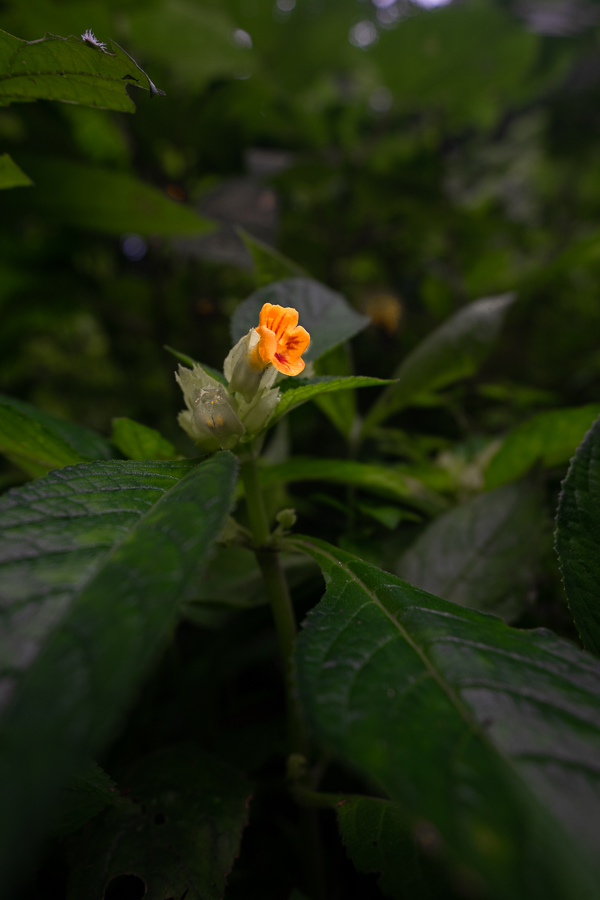 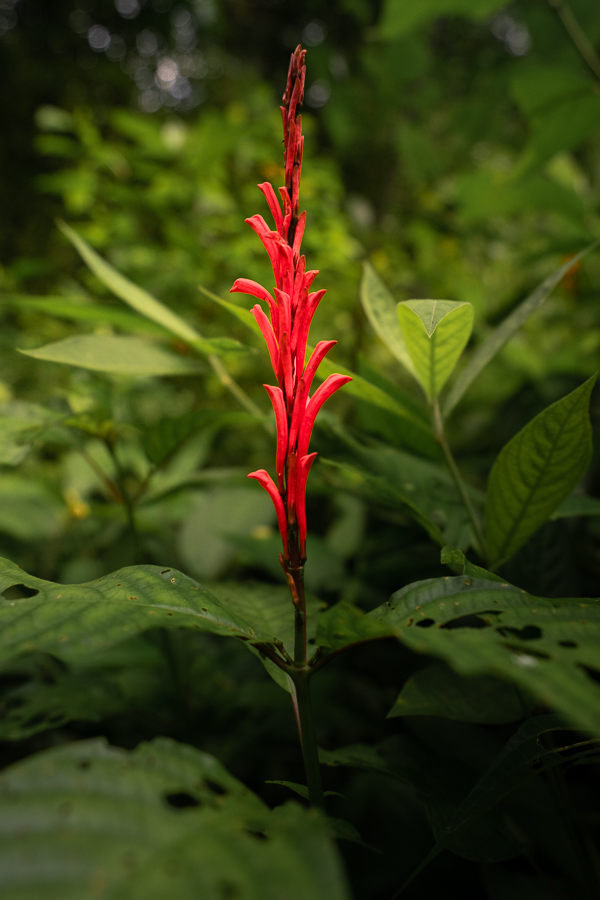 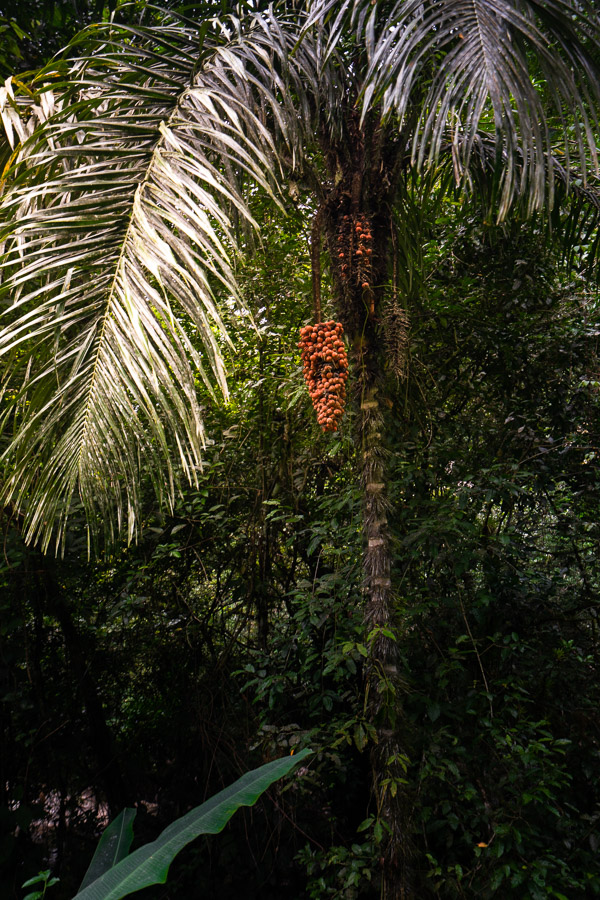 Finally, completely covered in sweat, I arrived at the Bermejo Waterfall. I dropped my bag and jumped straight into the pool to cool off. It didn’t take long because the water was freezing cold. Perfect.

I sat atop one of the huge boulders, eating my lunch. I watched, smelt and listened as the eco-system did its thing in all directions. Bugs, birds, the mist, leaves falling and rocks crumbling.

After lunch, I grabbed my camera and waded through the water and scrambled up the rocks to the main pool. Here I could take in the full Bermejo Waterfall with no obstruction. It’s an aggressive waterfall without a place to swim directly below it. However, the first pool is deep enough to at least cool off. I definitely suggest packing lunch and hanging out in this area for a few hours to appreciate the region and recover from your trek in! 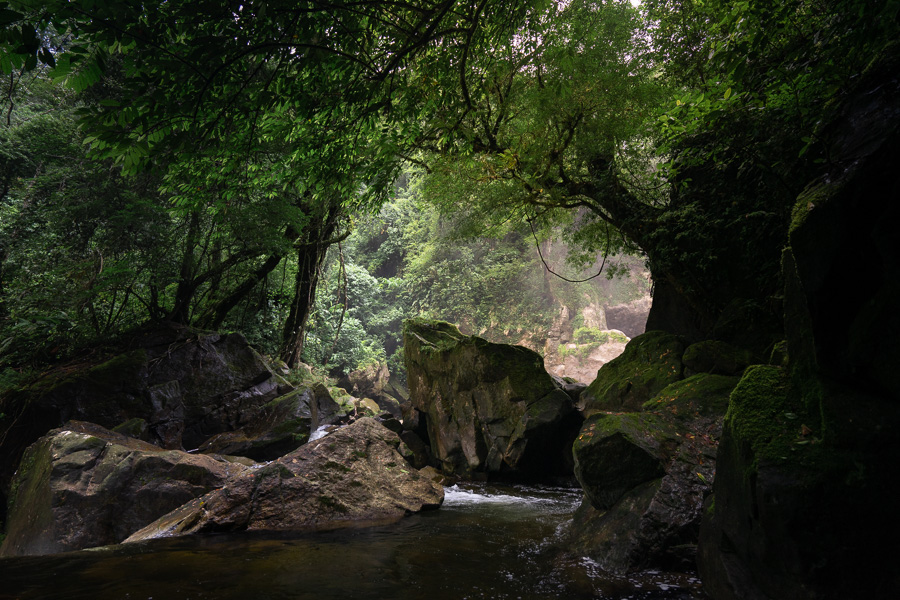 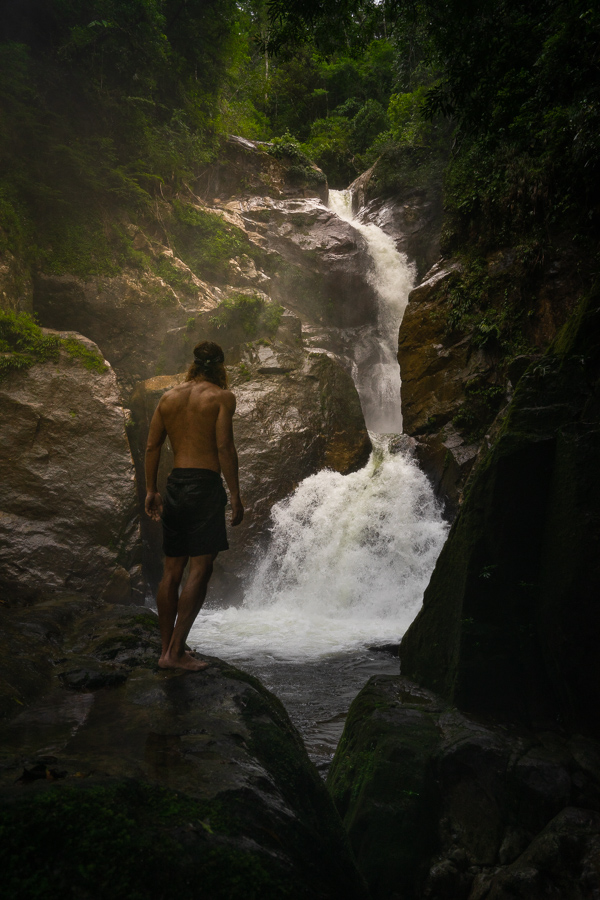 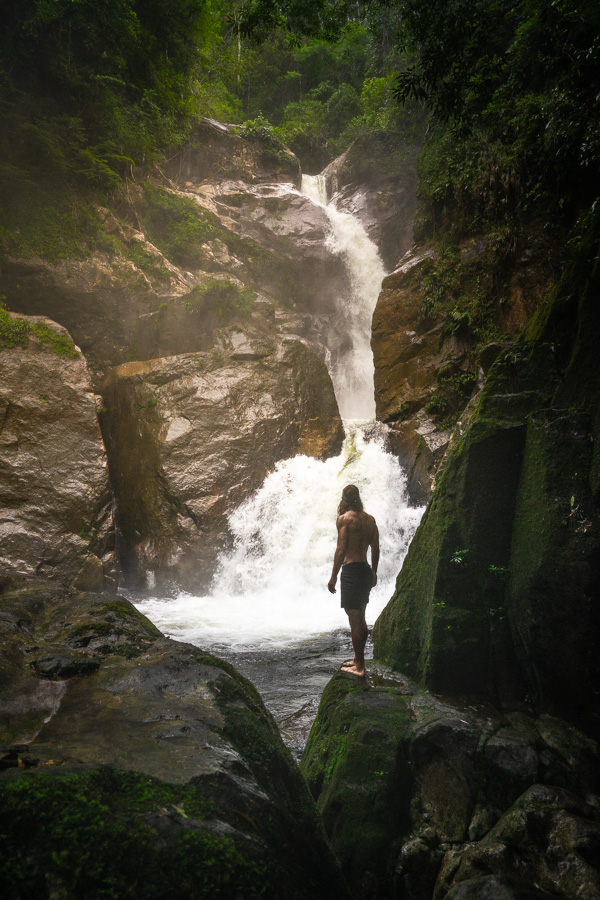 On the way back if you are muddy and need another break, stop off at the Bermejo River, which is just under the suspension bridge. I had a dip in these crystal clear waters before making the short but steep journey back up to the town to conclude another great adventure in Santa Fe, Veraguas. 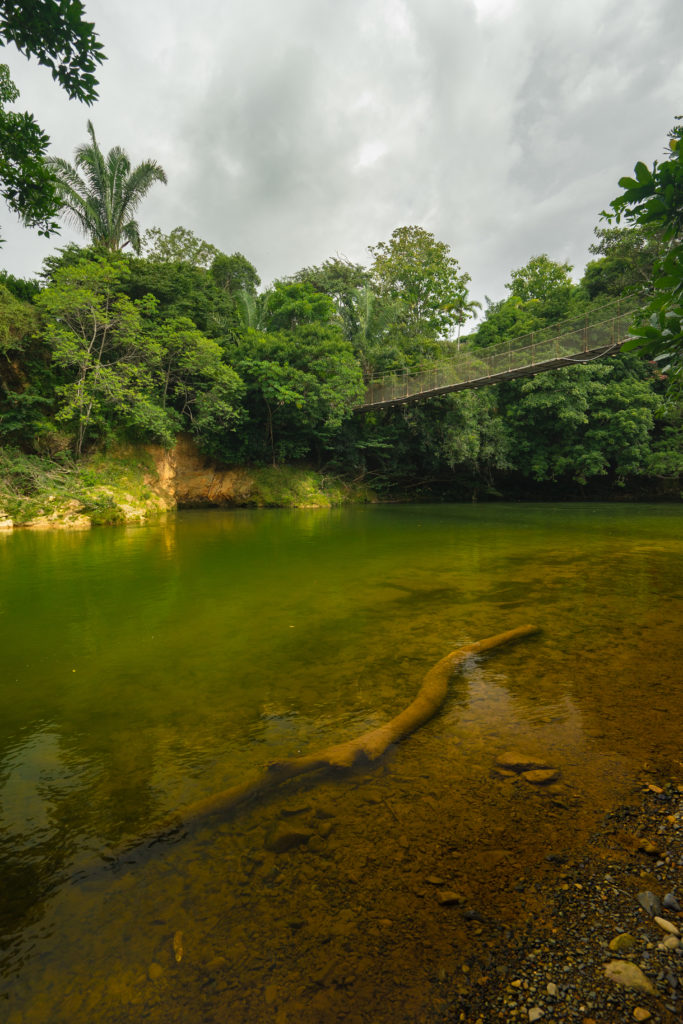 The following is a pin that is on the trail for Bermejo Waterfall. Log in to Maps.me for the best map but this will put you on the trail heading towards the actual trailhead. Follow my photos and directions in the blog post above for detailed guide on how to reach the suspension bridge and trailhead.