The time had finally come. Josh and I headed to Sanur to meet the crew and prepare for our endurance swim-run charity event. The Bali Hope Swim Run is an event created by one of the most inspiring people I met this year, Tom Hickman. The idea is to bring 20-30 people from all walks of life, all different athletic abilities and compete in a swim-run race with the ultimate goal of raising much-needed funding for the Nusa Lembongan Recycling Facility.

Tom also created the Bali Hope Ultra this year, which Josh competed in and won. That event supports scholarships to underprivileged Balinese children who may not otherwise have financial access to schooling. When Josh and I heard about the swim-run event we said why not. Tom is the kind of person you trust without meeting. When someone dedicated their entire life to creating events to help less privileged communities and individuals, you don’t have to ask many questions. You just put your hand up and commit. 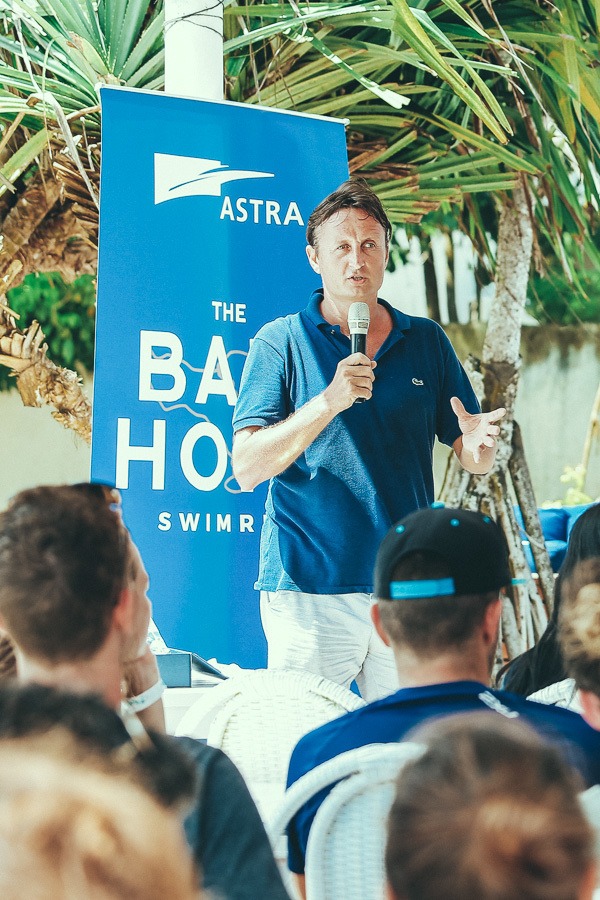 Josh and I decided to head to Moalboal in Cebu and train for a month before the event. We were up against some elite athletes, former Olympians and one of the current women’s world champions. It is a fun event but these type of people are naturally competitive, which is a great dynamic because people give their all but there is always this bigger cause of fundraising that is the focus rather than the race results.

We all met at the Maya, a 5-star hotel in Sanur for the introductory night. I wasn’t sure if I could even race. Two days earlier I had visited the hospital in Denpasar and my x-ray results showed a hairline fracture in my Ulna, which is one of the two arm bones. Essentially I was going to try and strap my wrist with tape and swim 3 kilometers at race speed with a fracture in my arm. Spirits weren’t down but we were apprehensive of my chances. There was also a level of disappointment after an insane month of commitment and training in the Philippines. I did my best to remain positive and gave myself a chance to get through it if I could handle the pain. 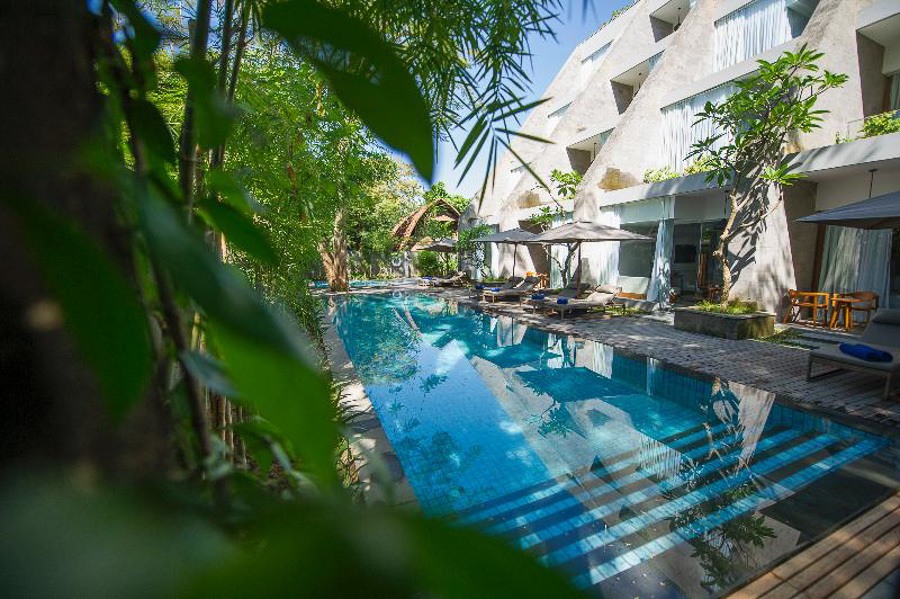 From the first moment at the hotel, we knew it was going to be an awesome 5-day event. All of the other participants had amazing stories. This wasn’t an ordinary pack of humans. Here are a few examples of the incredible people we were fortunate enough to be joining for the event:

The list seriously went on and on with elite endurance athletes but also some inspirational non-athletes. A pair of brothers from New Zealand were going to test themselves and push it to the limit. Kyron and Logan weren’t there to grab a podium spot. Logan was coming strongly out of rehab and this was a personal challenge. He’s a big boy with an even bigger heart and it was as much interest to everyone about whether Logan could get through the tough course as to who would win the event. He knew all along that he wasn’t stopping no matter what and it was inspiring to see him grit his teeth and take the course on. This was what the Bali Hope Swim Run was all about. Combining athletic heroes with everyday heroes in an arena where they can push themselves physically while contributing to the greater cause, which was the upgrade of the plastic recycling facility. 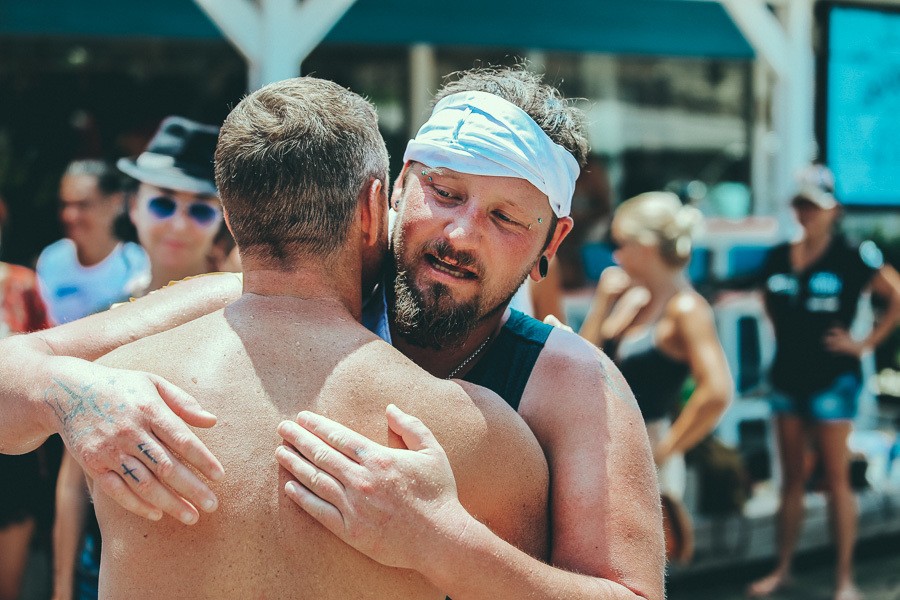 We took our ferry over to Nusa Lembongan and landed at an unreal accommodation called Sandy Bay Beach Club. The villas were something out of a movie with private infinity pools and a big private beach. Tom and the team manage to partner with local organizations and accommodations who are on board supporting the cause as well. This way they can give an incredible experience to the participants and then help the community directly. It’s a win-win for local accommodations and partners to support an event that has the sole purpose of supporting their community!

Good food, great conversations with all the legends involved were the staple of the days leading up to the event. The highlight before race-day was a visit to a local school where BCF (Bali Children Foundation) educated the children about plastic pollution and the environment.

We also made an important visit to the Nusa Lembongan Recycling Plant. Here we saw first-hand how far they have already come and what areas they still needed a lot of improvement in. The $40,000 USD we raised would be pumped directly into this facility to guide it closer to being able to support the entire island and neighboring island Nusa Ceningan. Meeting the staff, founders and workers was an awesome insight and I was stoked to be able to show my contributors and everyone where their money was going. This is a very important part of the trip. 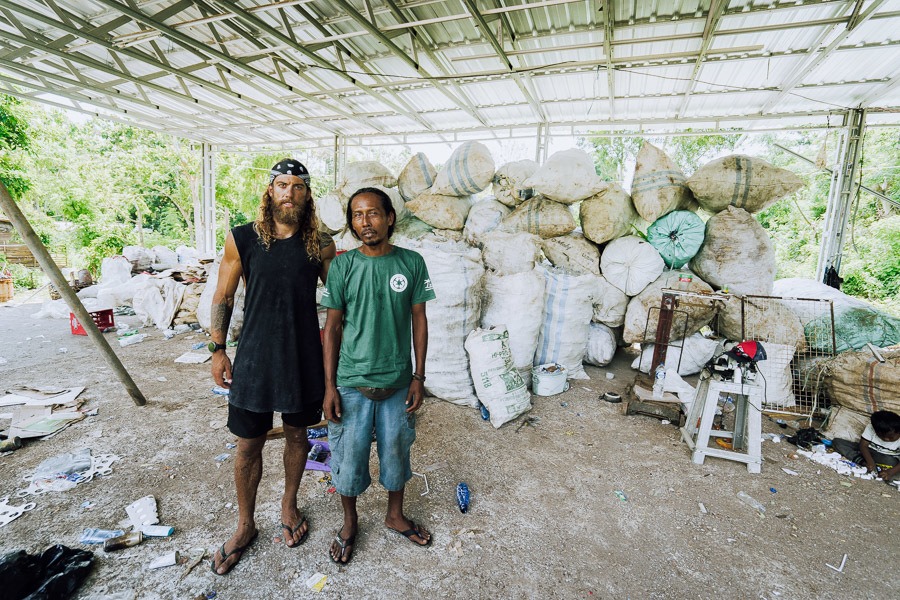 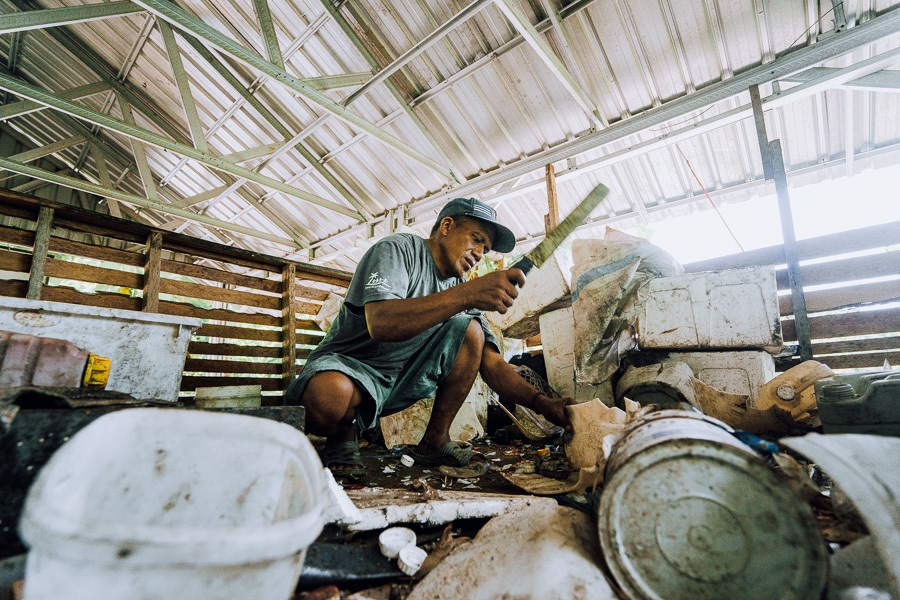 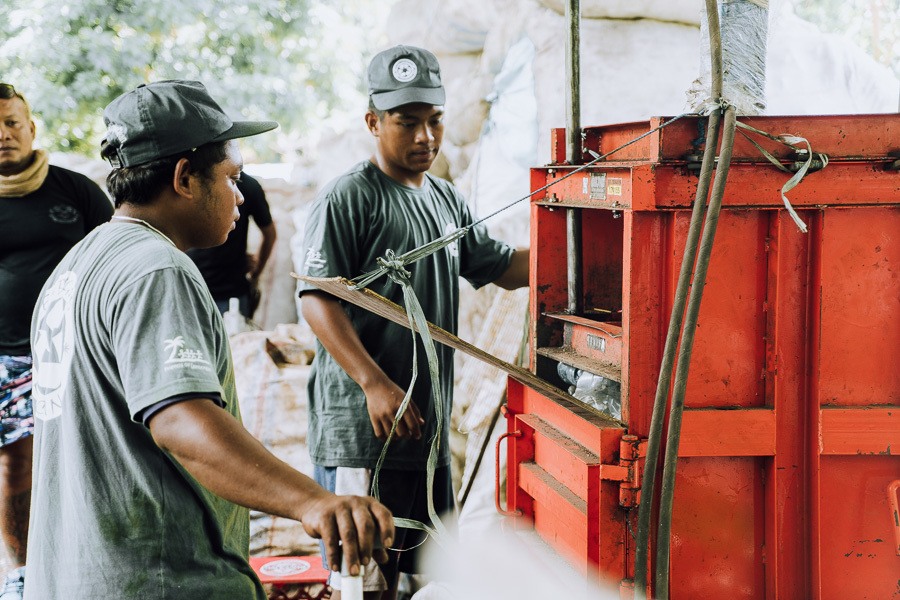 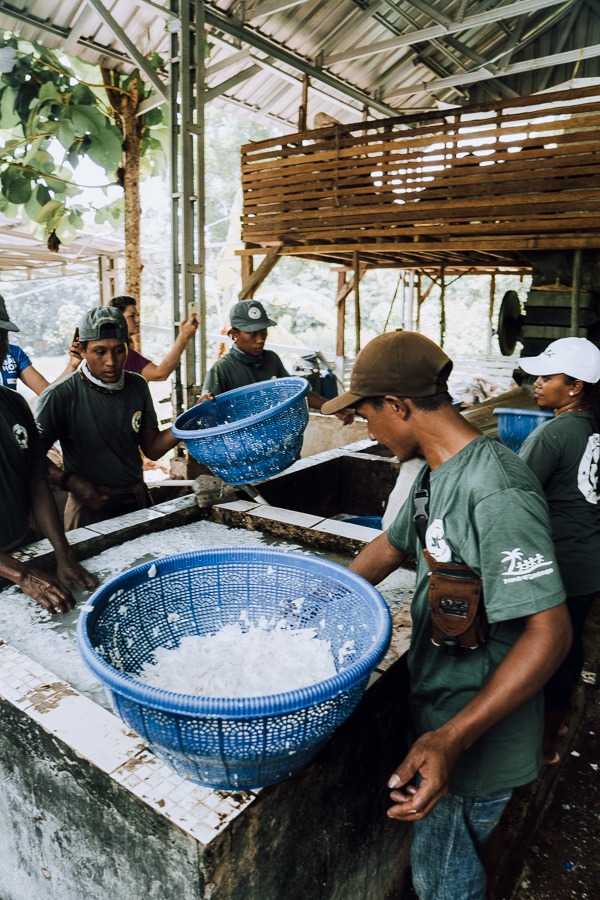 Race-day had arrived. The nerves were there. I had never done a race, to be honest. I’ve played some pretty big soccer games and finals in stadiums bet never raced through a course. This was going to be new. 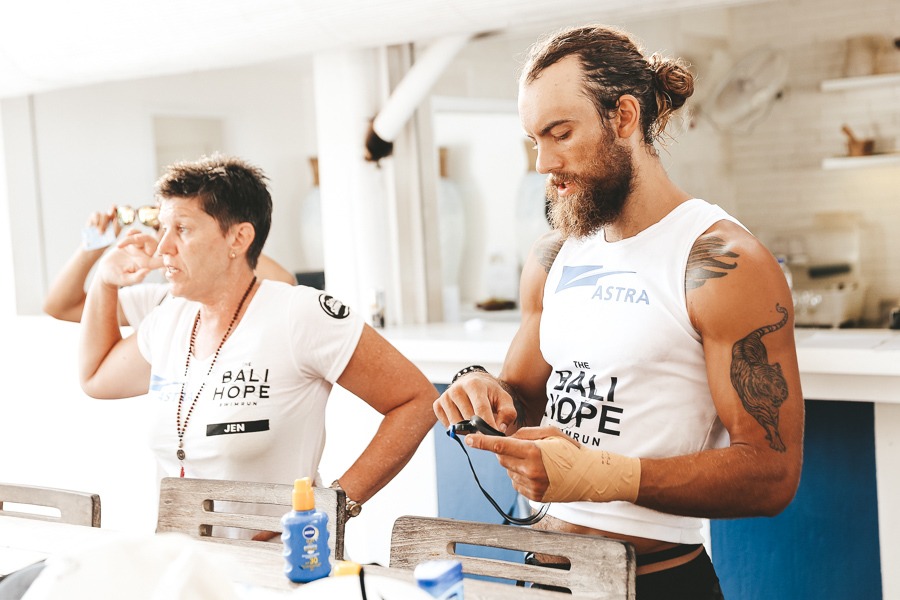 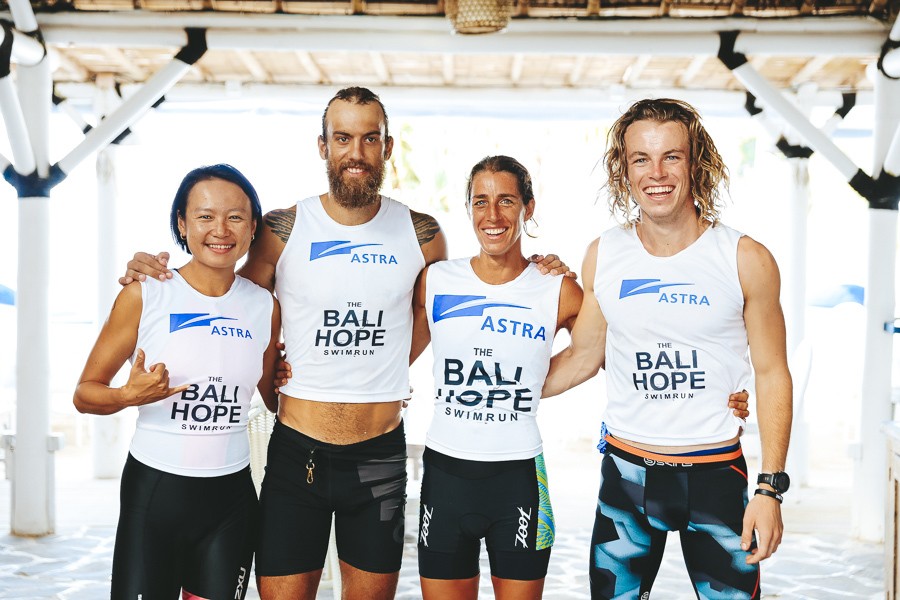 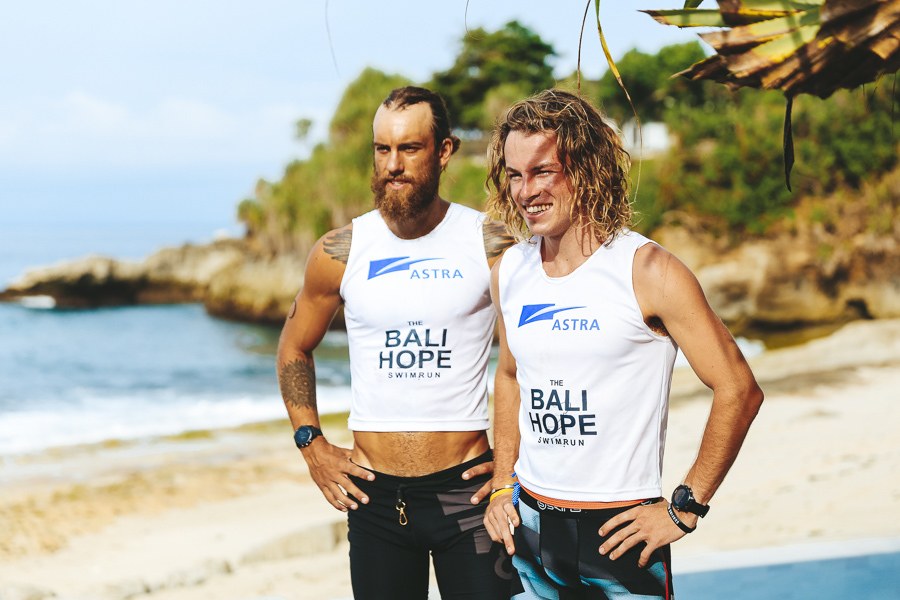 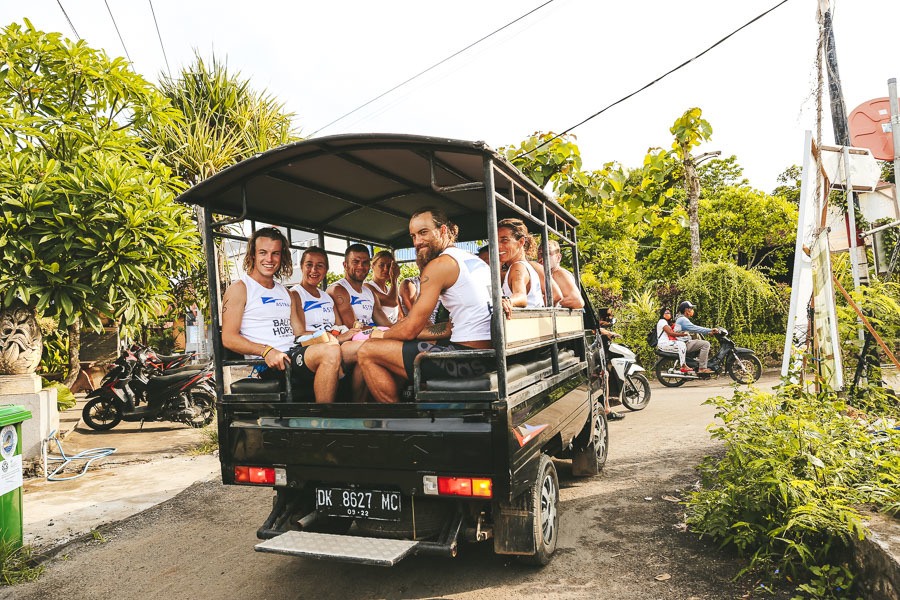 We took the boat out to the starting line in the middle of the ocean. The countdown began and off we set towards the shore for the first leg. Josh and I had a rope linking us, paddles and a float. This is because you have to swim and run in the same gear so, with shoes on, the float helps your legs stay near the surface. The paddled help you to swim faster. The rope helps you stay together, which is a swim-run race rule to be within 10-meters. It also helped Josh pull me around the course! 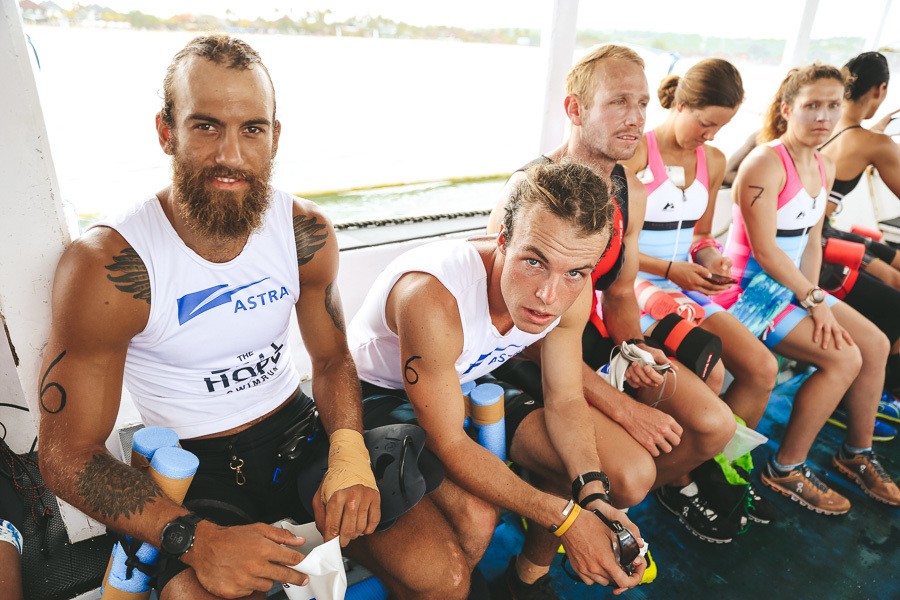 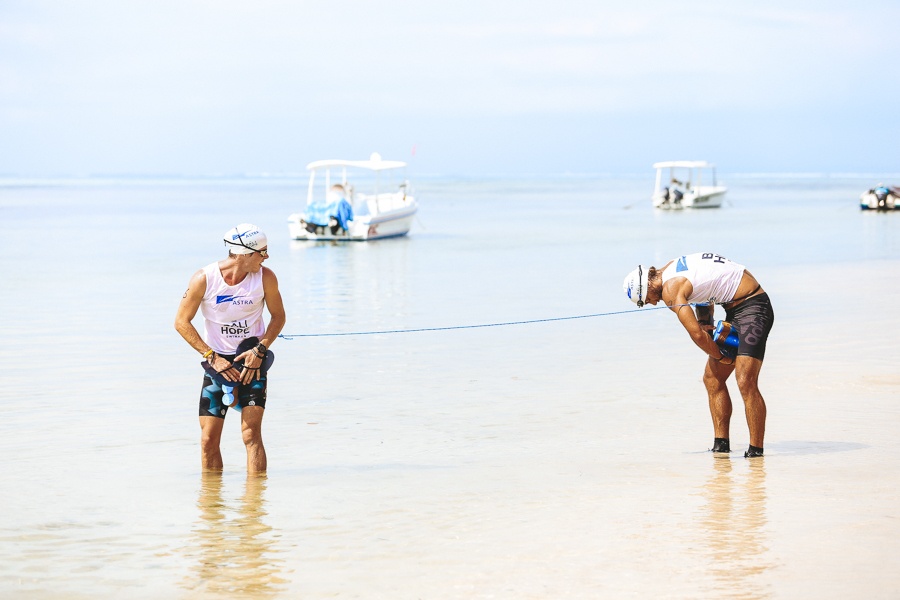 We emerged from the first swim in 7th. Shit! We were in trouble early. But it was time to run. We were alright at running I remember thinking. Off we set and before we left the transition area we had cruised into third place and were running 4:30 kilometers as this was an 8km stretch out of the total 20km we would be running. We didn’t want to go too hard too early. The swimmer boys from Perth and Swedish world champs were nowhere to be seen but we also had a huge gap to 4th and the rest of the pack. That part of the run was peaceful. I remember saying to Josh, I hadn’t heard this much silence in a while! He was probably thinking stop talking and run faster! 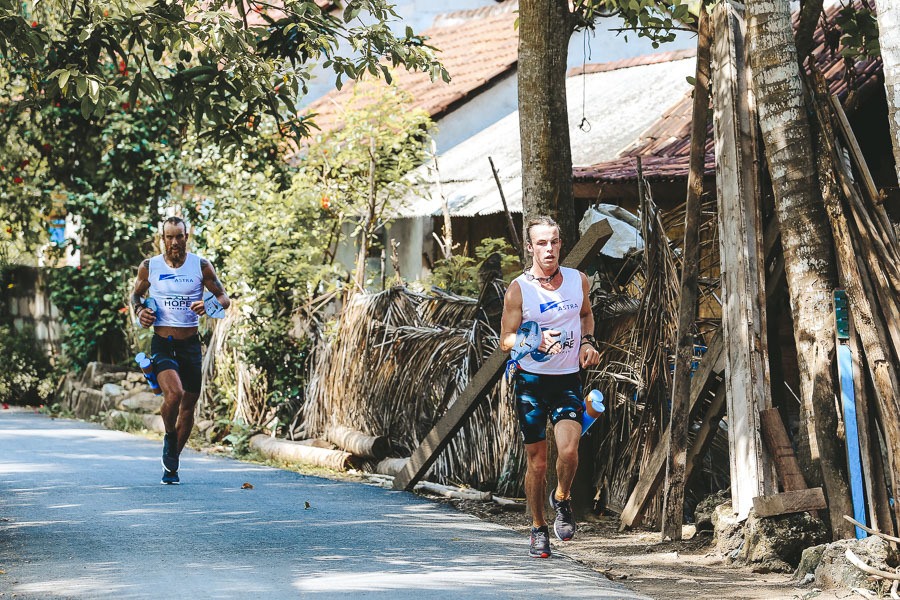 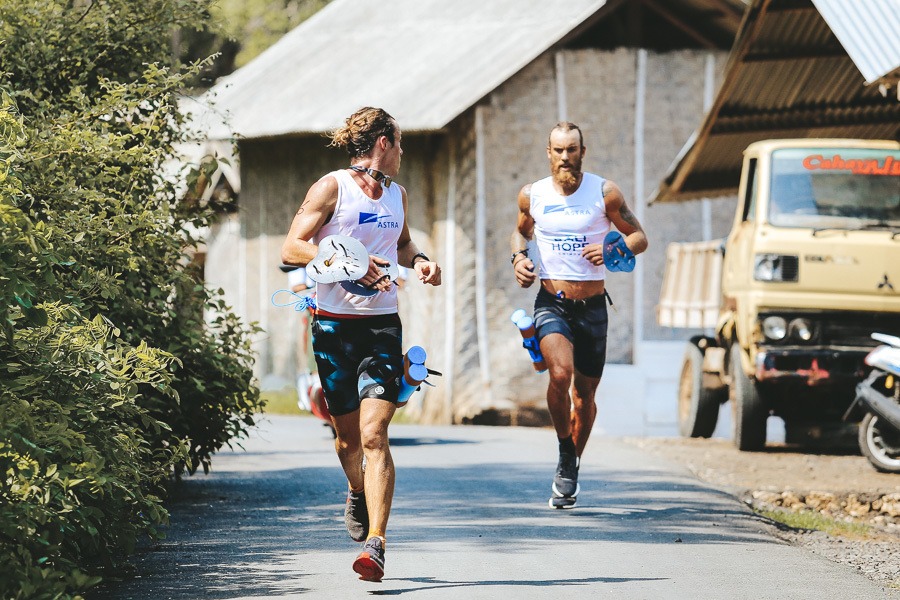 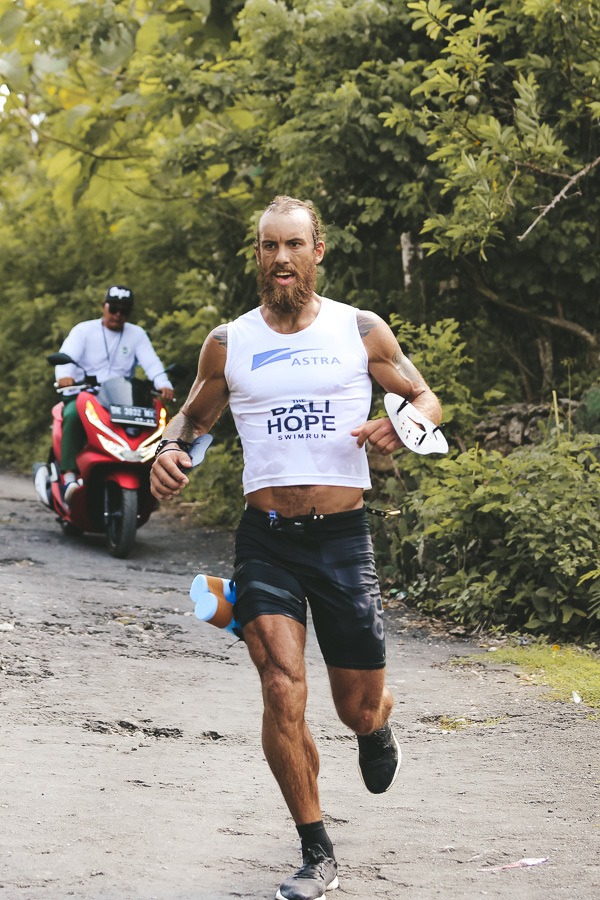 We made it to the second swim, which is a stretch across to Ceningan near the famous yellow bridge. The others were close to already getting out on the other side. It was nice to see them though! We made it across nicely with a bit of a current and then thought we would step up the speed a bit as we weren’t too tired yet. Alternating between the swim and the run gives your legs a chance to rest. 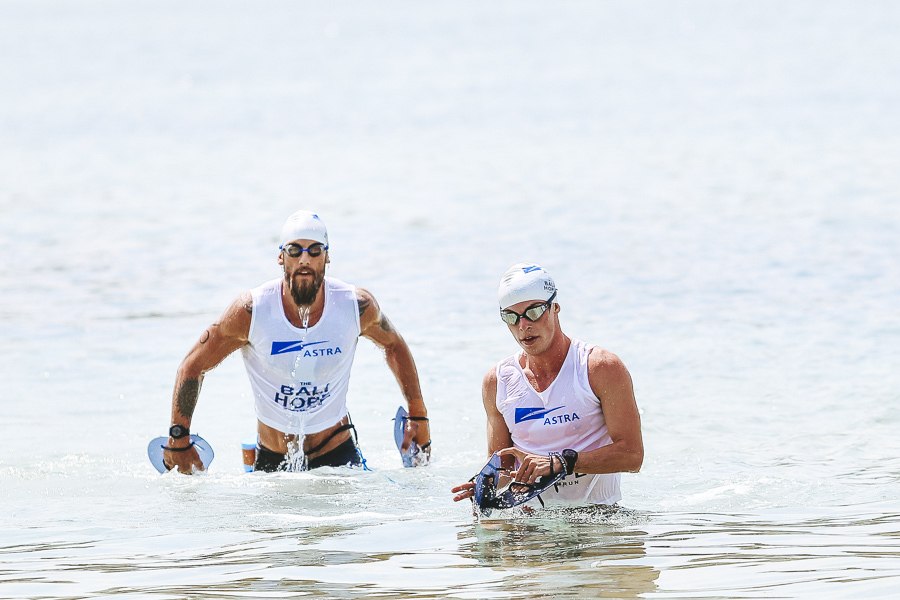 This part of the run was 5km but very steep to the top of Ceningan and the back down the hill. The sun was piercing now and little did we know that the swimmer boys and the Swedes were feeling the heat. I think they assumed it was a 2-horse race and were feeling each other out for a sprint finish. They walked for a period up the hill. Josh and I had assumed we would probably never be caught but also thought the leaders would only continue to increase their lead. 3rd place would be great considering I didn’t know if I was even going to be able to swim just two days ago!

Josh and I ran the whole way up the hill but were mindful not to go too fast and hammer our legs. As we hit the top of the hill there was a drink station. We rounded the corner and were shocked to see both the two leading teams gathered around the station having a drink. We grabbed a quick cup of coconut water and then overtook everyone. What just happened? We were in first and our lead was growing as we smashed our way down the hill to the third swim. 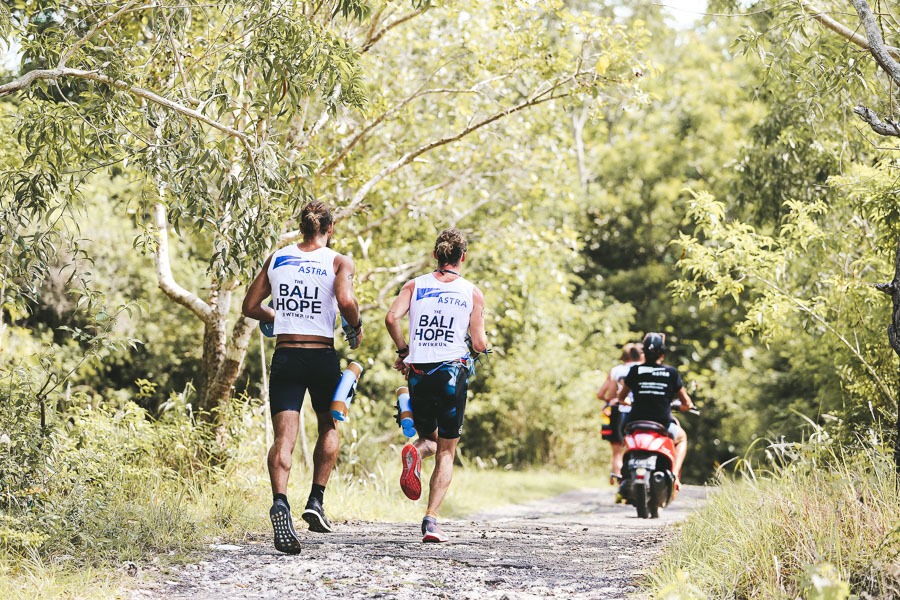 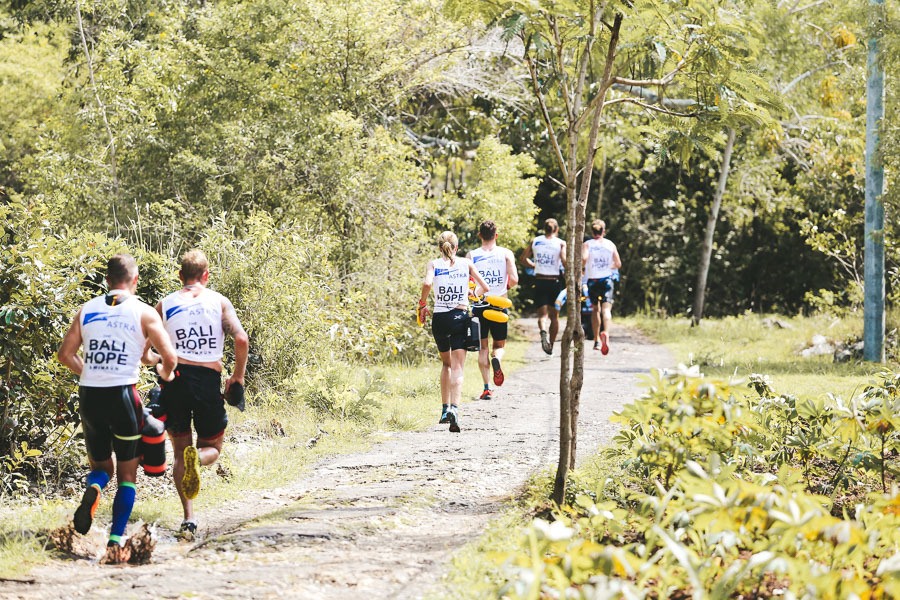 The swim halted our celebrations as both teams overtook us on this tough swim. Against the current, our lack of expertise in the water was exposed and the class of the other competitors showed. Their swimming experience put them ahead of us as we all emerged from the water. From here the runs and swims were short and we couldn’t make up the time on the runs that we were losing on the swims to these legends. 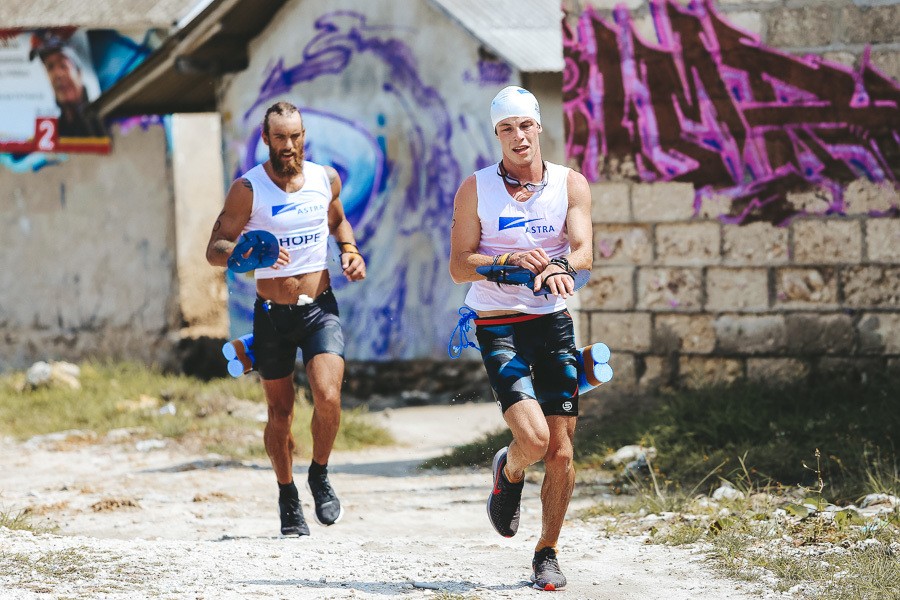 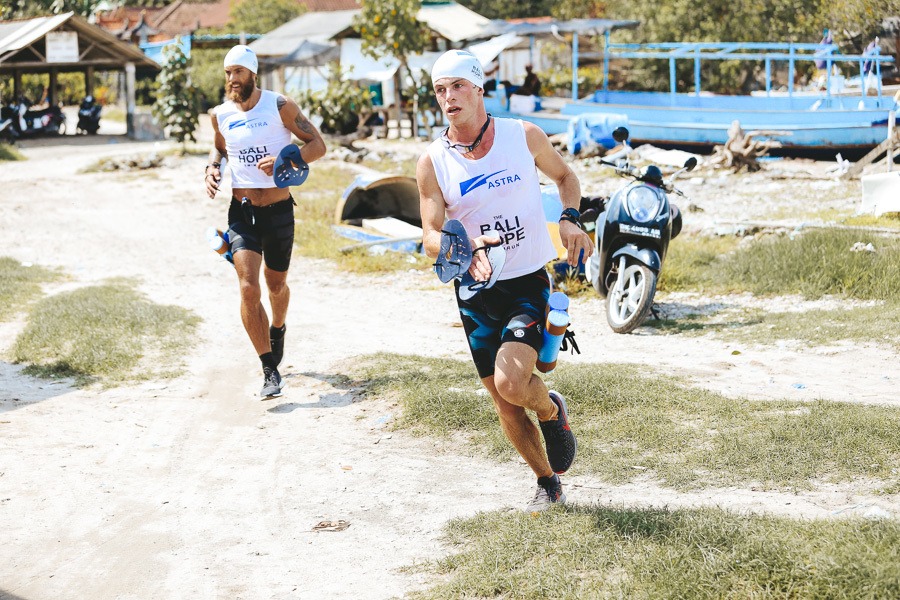 It was great to give the world champs from Sweden a scare and possibly a little nudge to up the tempo. It definitely added great competitiveness to the race but their class showed as the Swedes crossed the line first with the swimmers not too far behind. Josh and I crossed in third after giving it a red hot crack! 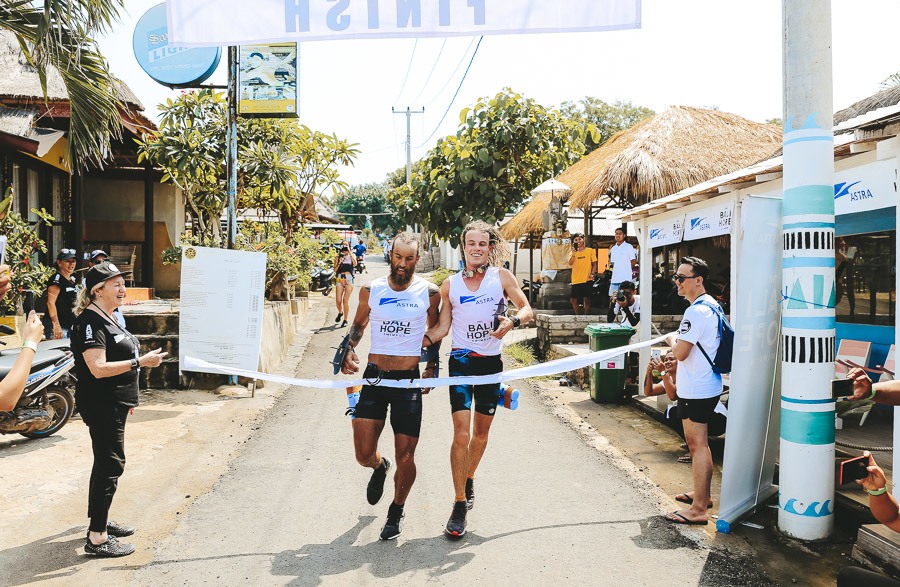 All of the competitors waited at the finish line as each new pair come down the hill. This is what sports are meant to be like and it was refreshing for lots of the athletes who are used to sport being a bit more cutthroat and serious. As the second last duo crossed the line we all now began to wait for Logan and Kyron. We were all wishing they would make it! About an hour or so later, word came in they had completed the final swim. Surely they would make the final run home.

They had done it! They emerged over the top of the final hill and you could see it meant a lot to the boys, especially Logan. He’s a big tough looking guy, but he stayed in our villa and we got to know him a little bit better. Everybody had layers and beneath his rough and ready look, Logan is a genuinely good person who is navigating his way out of some difficult times. That emotion came out at the end as he performed his version of the Haka before crossing the line! 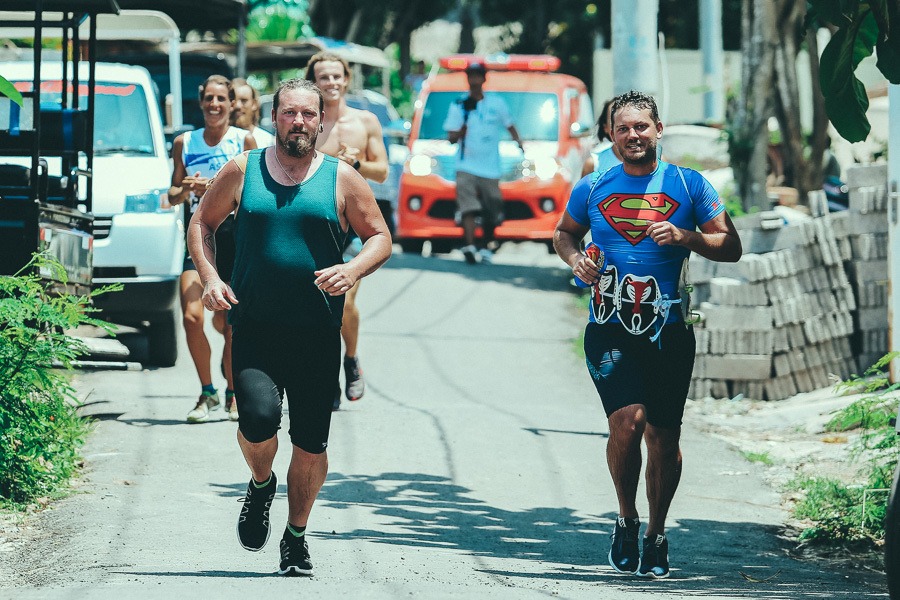 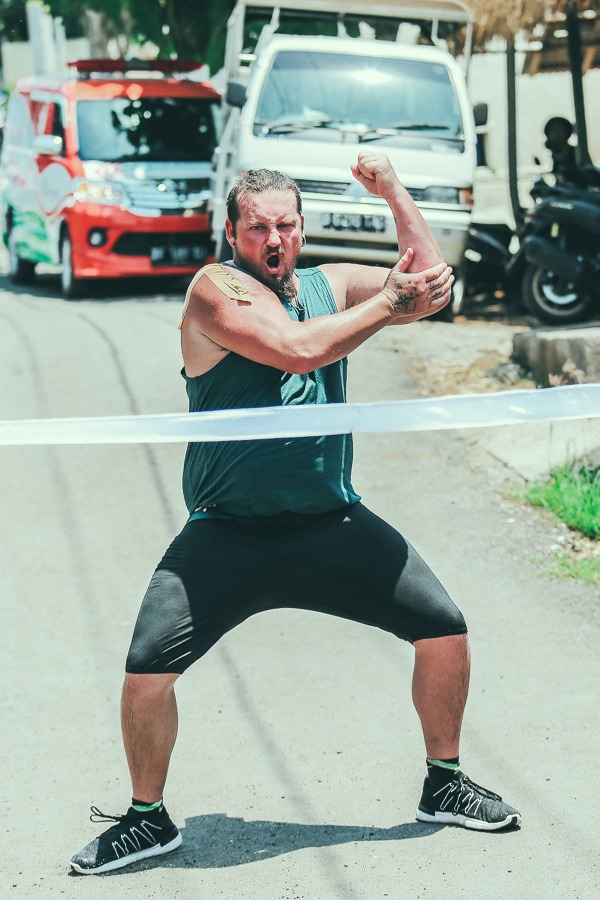 Event organizer Tom and his other managers, support crew and staff took a deep collective breath that the first ever swim-run event in South-East Asia had gone down safely and without a hitch. For me to see the relief and pure pride in Tom’s eyes was probably the most memorable part of the race-day for me. It was more meaningful than crossing the finish line. Running a 2-hour race is one thing, but spending 6-months to organize a non-profit event to benefit a community is non-comparable. Tom and the team are the real endurance athletes and the Nusa Lembongan Community are the real winners. 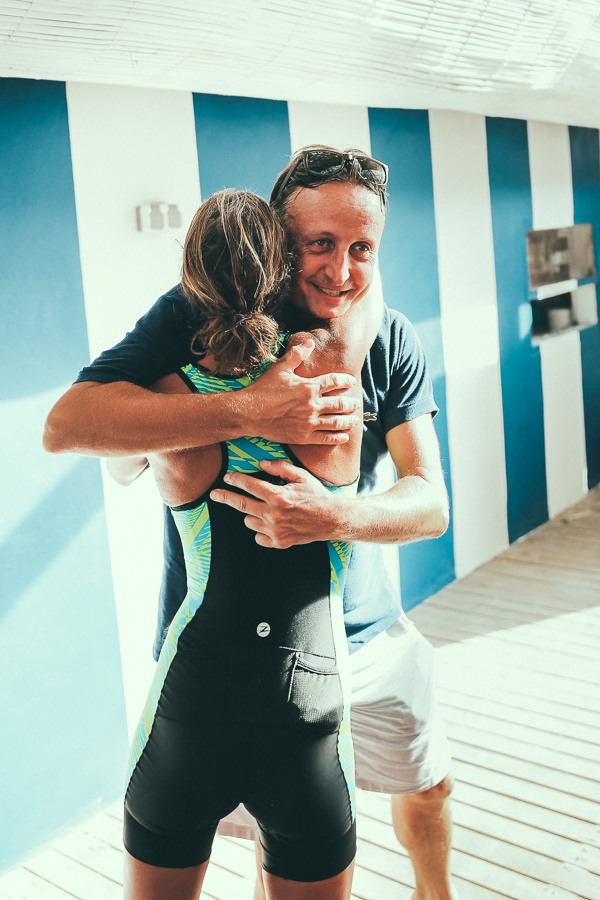 This is a huge cheers to all of the participants, staff, volunteers and unsung heroes involved. This is a thank you to all of you legends from Instagram who supported my personal fundraising for this event. It is a moment of appreciation for Tom, a man who had the vision to do something incredible and poured his heart into it. These are the people who change the world and inspire others to do the same in the process. I’m inspired and I hope you are too. 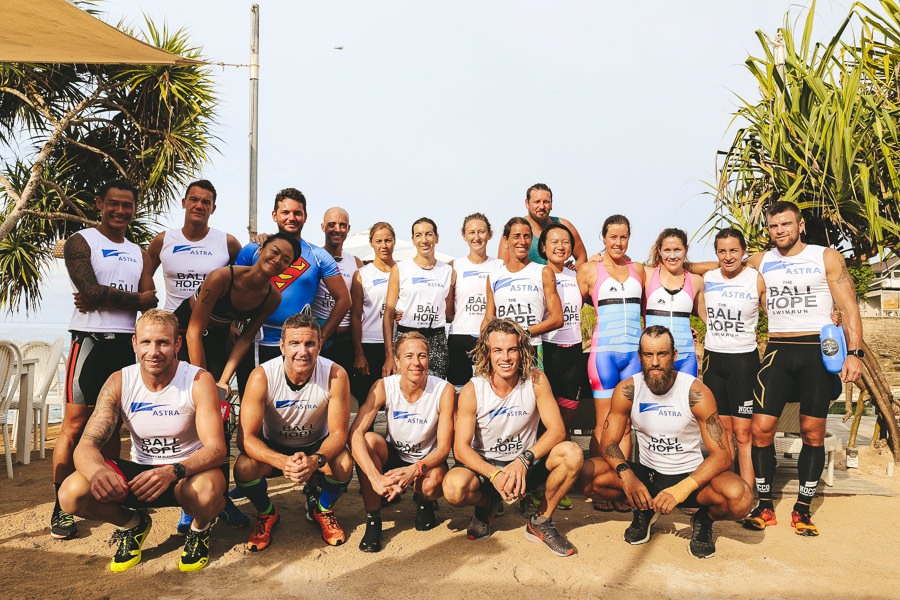