The Sony 4K Action Cam is a great tool for filming adventure sports, travel and underwater activities. Becuase of its small size, durability and various mounts and wearable straps, it allows you to create some epic video from unique angles and perspectives. In this blog post, I want to give you a few tips that might help strengthen your next action sports or travel video.

The most important part of the filming process with the Sony 4K Action Cam is the angles you to choose to shoot from. When you are filming you need to be able to put yourself in the position of the audience and envision how they are going to view the clip and understand how it will be portrayed.

If you shoot POV, which is essentially how you view the world, the audience will feel like they are the ones swimming or holding items. A great way to achieve this is with a mouth mount. The Sony 4K Action Cam then films from the perspective of your eyes and it is a transformative feeling for the audience who take on your movements.

If you shoot from down low the audience will see the objects, people, and surroundings as much larger than they are. You can also focus in on details. In my San Blas video, I have a couple of clips focusing on the feet filming from ground level. I was literally on my stomach filming one of the scenes as someone walks past. This allowed me to show the texture of the sand, the grass and the palm tree that were being walked on.

By shooting from up high you can give a greater perspective of the scene. I will often climb a tree on an island and get the initial shot to show the setting. Holding a selfie stick up high with the camera pointing back down is also another great method.

Find unique ways to frame your shots. Can you film from within a cave, a window or doorway to give the shot more depth like I did below? By adding an element to the foreground you can help to show what the scene is like rather than just focusing on the action. Here is an example below. Instead of shooting the backflip directly, I shot it from within the cave. This way I was able to show the scene of the caves but still focusing on the backflip. 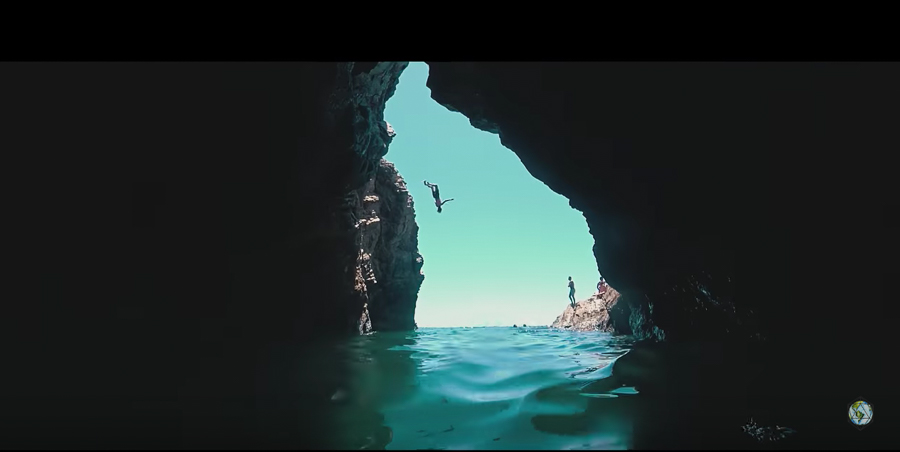 Mounts are a great way to generate cool angles like I mentioned before. Mounting the Sony 4K Action Cam. There are tons of mounts available such as suction mounts that suck onto car bonnets, wings of light plans and surfboards. You are only limited by your imagination. Just think how epic it would be to mount the Sony 4K Action Cam in so many unique spots like the end of a wing on a plane looking back towards the plane as it soars through the sky.

Sony 4K Action Cam generates great quality footage. However, lighting is what makes the footage from a 7/10 to a 10/10. You need to put in the effort to shoot in the golden hour of the day or when the sun is shining if possible. If you do shoot at golden hour think about how you want to involve the sun and the lighting. Can you have the person walking through the sun as you shoot directly towards it giving off sun flares while the person blocks the majority of the sun? Can you play with the shadows the lighting is creating? The lighting in the golden hour is often the softest and most visually pleasing with fewer shadows.

One of the best ways to make sure your video is engaging is to plan for transitions. Whether it is as simple as a water transition, which is essentially filming someone jumping into the water and then cutting to them already swimming underwater. This is incredibly easy but very engaging. Other transitions will involve multiple cuts from the same scene. For example in my San Blas video below, I film a person walking from head height and their feet and then into the distance. These three cuts transition well together and help to tell the story.

I’ve been filming with the Sony 4K Action Cam for over a year now and have put together the following videos throughout that time.

The Ultimate Akaso Brave 4 Review! – The Jestings Of Jess

[…] is 4K capable as well as able to support 1080p at 60 frame per second, you are able to record some very high-quality video footage of you out and about skateboarding or taking part in whatever your sport of choice is. If you are […]