Discover the beauty of island travel on a luxury live aboard sailboat, cruising around the amazing Labuan Bajo, Indonesia.

This post was created from experiences during the Trip of Wonders journey with Indonesia Travel, however all opinions remain my own!

In what was the best experience of 2016 so far, I boarded a wooden Labuan Bajo liveaboard sailboat with no idea about what to expect. Over the course of the next 40 hours we would island hop to Mesa Island Village, Padar Island and even sometimes just anchor in the middle of nowhere to snorkel the crystal clear waters. 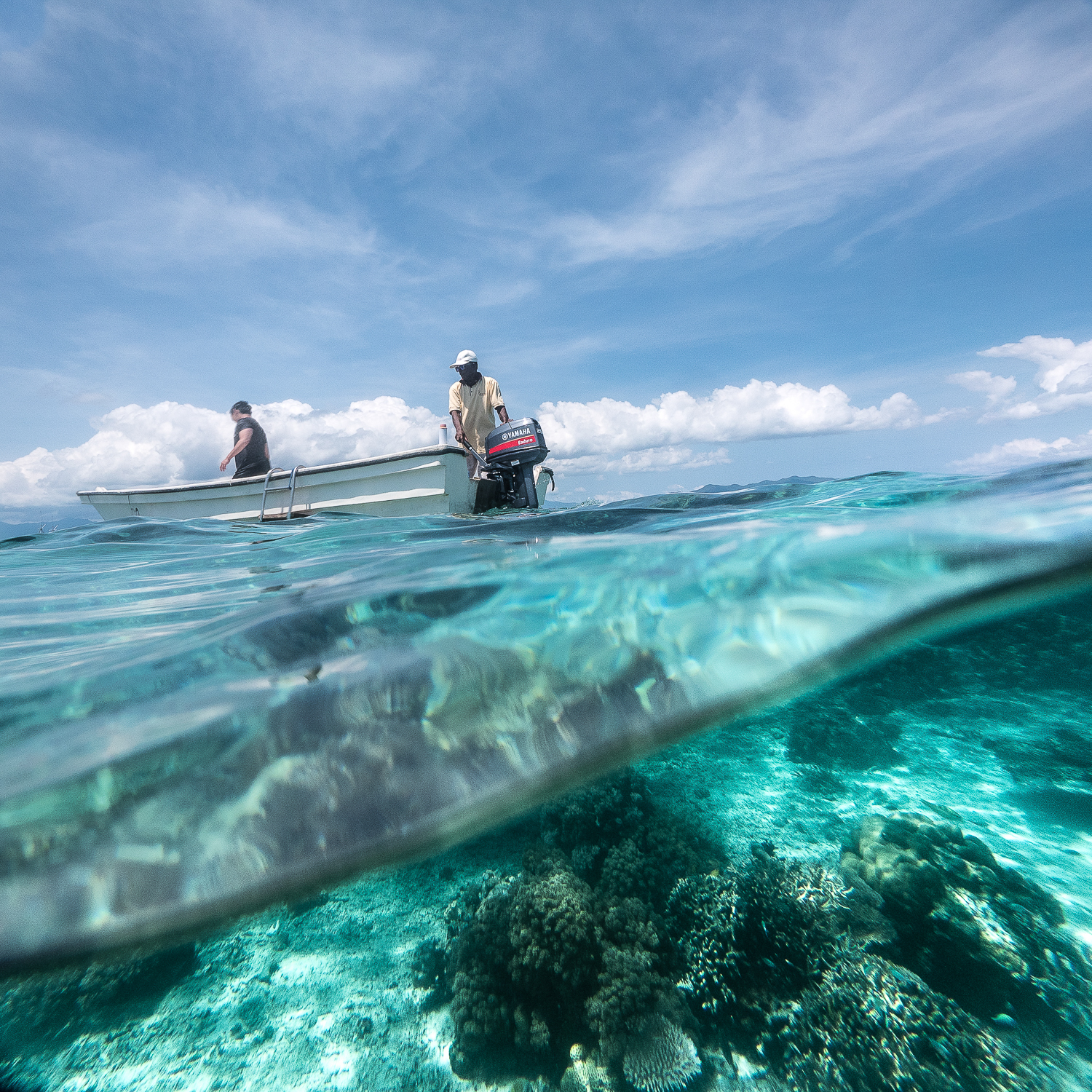 There was about 15 of us on our liveaboard and two other sailboats were also part of our 40 strong crew. The first thing I asked Jack our captain, was if he would let me jump from the top of the mast. He said sure but as long as the boat wasn’t moving or at night time. That seemed fair enough. I was already falling in love with island travel.

There were all the amenities privileged westerners have come to know and love on the liveaboard sailboat. We had comfortable beds, hot showers, a chef, dining table, ample food and drinks and an upstairs balcony with bean bags. A few of the adventurous travelers slept on the top deck in the bean bags, falling asleep while stargazing and waking up to the sun rising.

This was the best 40 hours of the year for me so far and I will take you through the itinerary of our island travel. We also spent time in the Komodo region several days earlier on a smaller boat. I will include those details too as they are all locations and activities you can do on a liveaboard. 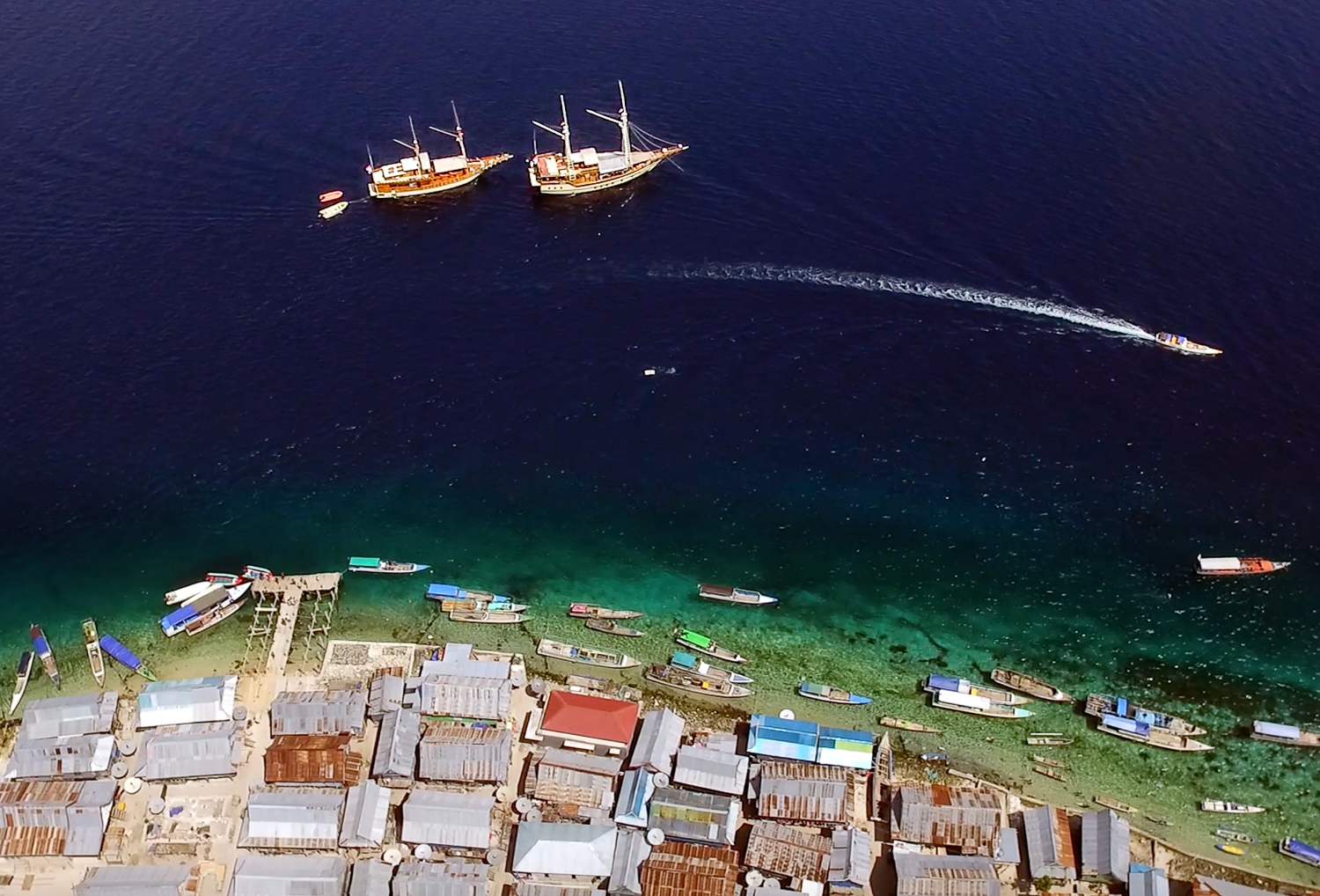 We boarded the boat from Flores and sailed on for an hour or so, hanging out on the upper deck as we passed other islands. The boat was made almost entirely from wood and I fell in love with the feeling of sailing. I have no idea how to sail a boat, but my grandfather was a sailor so it must be in my blood.

Our first stop was a snorkel straight off of the boat. I have lived on Oahu, Hawaii for two years, spent a week in the Gili Islands in Indonesia and been to Koh Samui, Thailand. Never have been in clearer water with such great snorkeling. We were in the middle of the ocean with the closest land about a mile away. I found a few huge shells and was constantly swarmed by schools of colorful fish. The coral was unlike any I had seen before, and almost resembled trees. 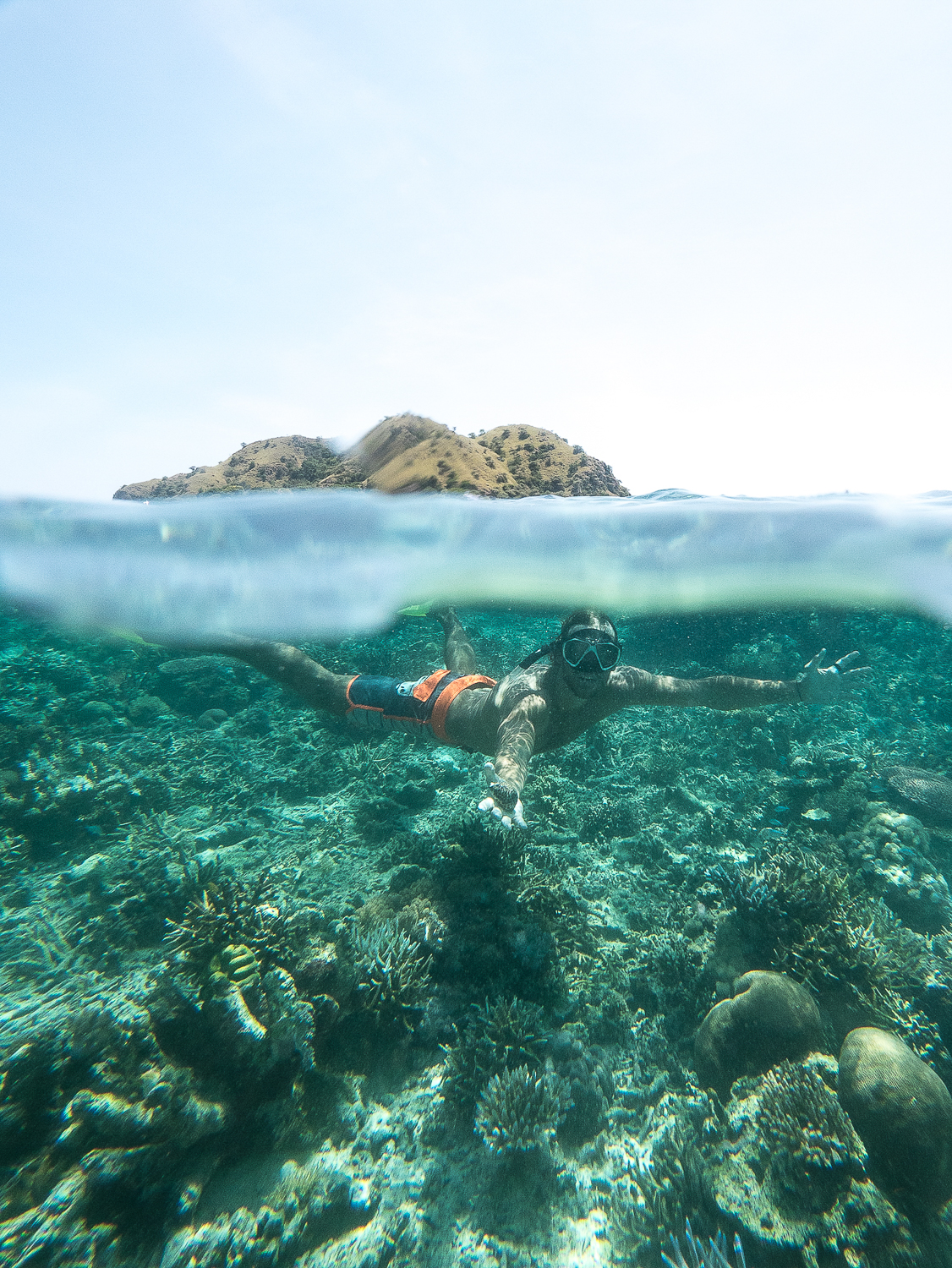 A quick bite to eat before I rushed off with my notebook and camera to Mesa Island Village. I had prepared a short interview for one of the elders of the Island. I only had an hour to get on and off the island and it was a total overload to the senses.

Mesa Island is home to sea nomads who chose to live on a tiny piece of land in the middle of the ocean, which for 10 months of the year, has no fresh water source. They ship their water in, on long boats from Flores. With the help of my native-speaking companion Aria, we managed to to track down Mr. Haji Badu Rahim and his wife in their family home, thanks to the help of other locals. 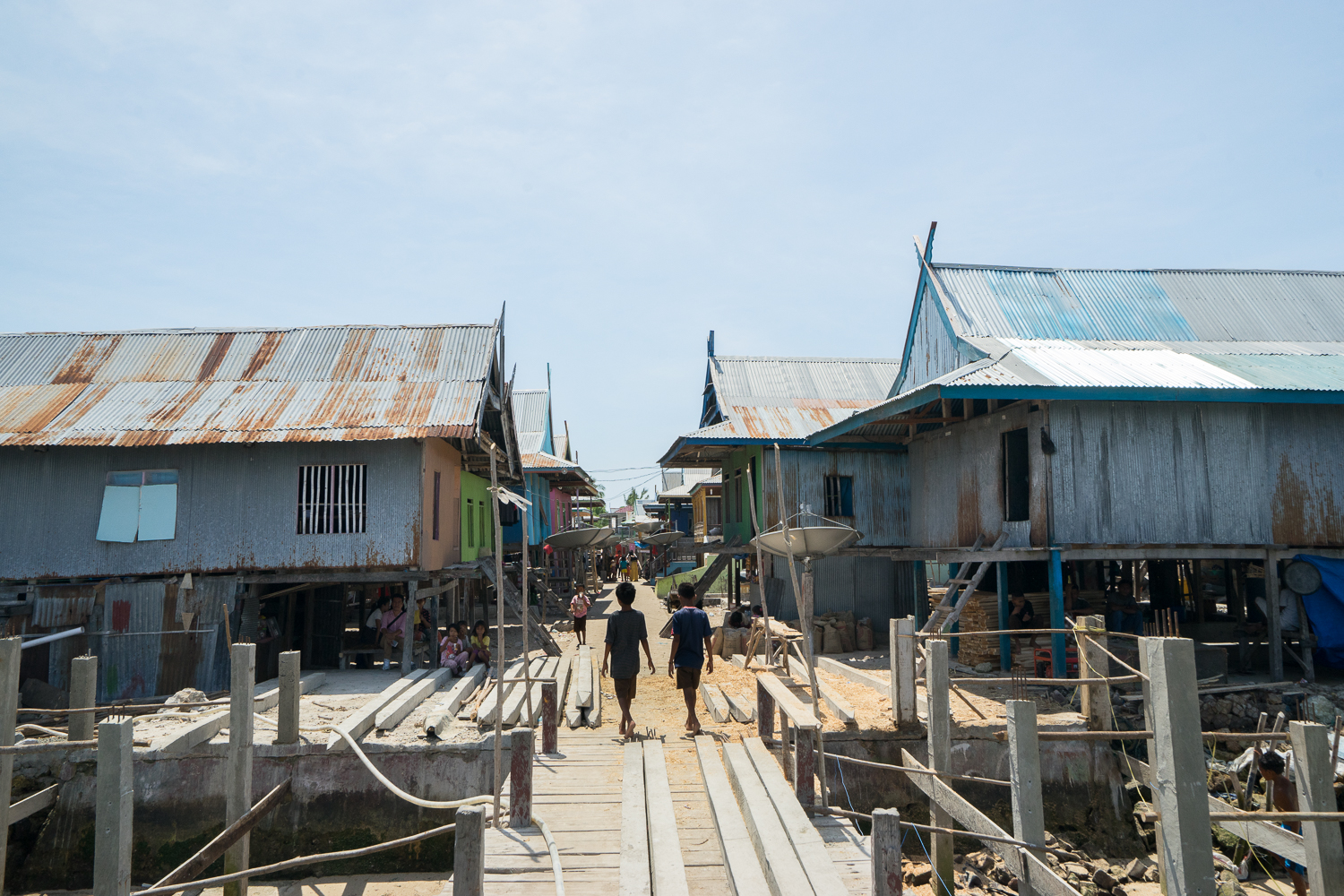 We spoke to him about the history, culture, children, lifestyle and future of the island. He cleared up several myths surrounding the island and shared several funny stories with us. He used to have two pieces of glass tied by string to use as goggles. We asked him how it felt the first time he used fins/flippers and he laughed saying that he could swim to Flores with them easy! 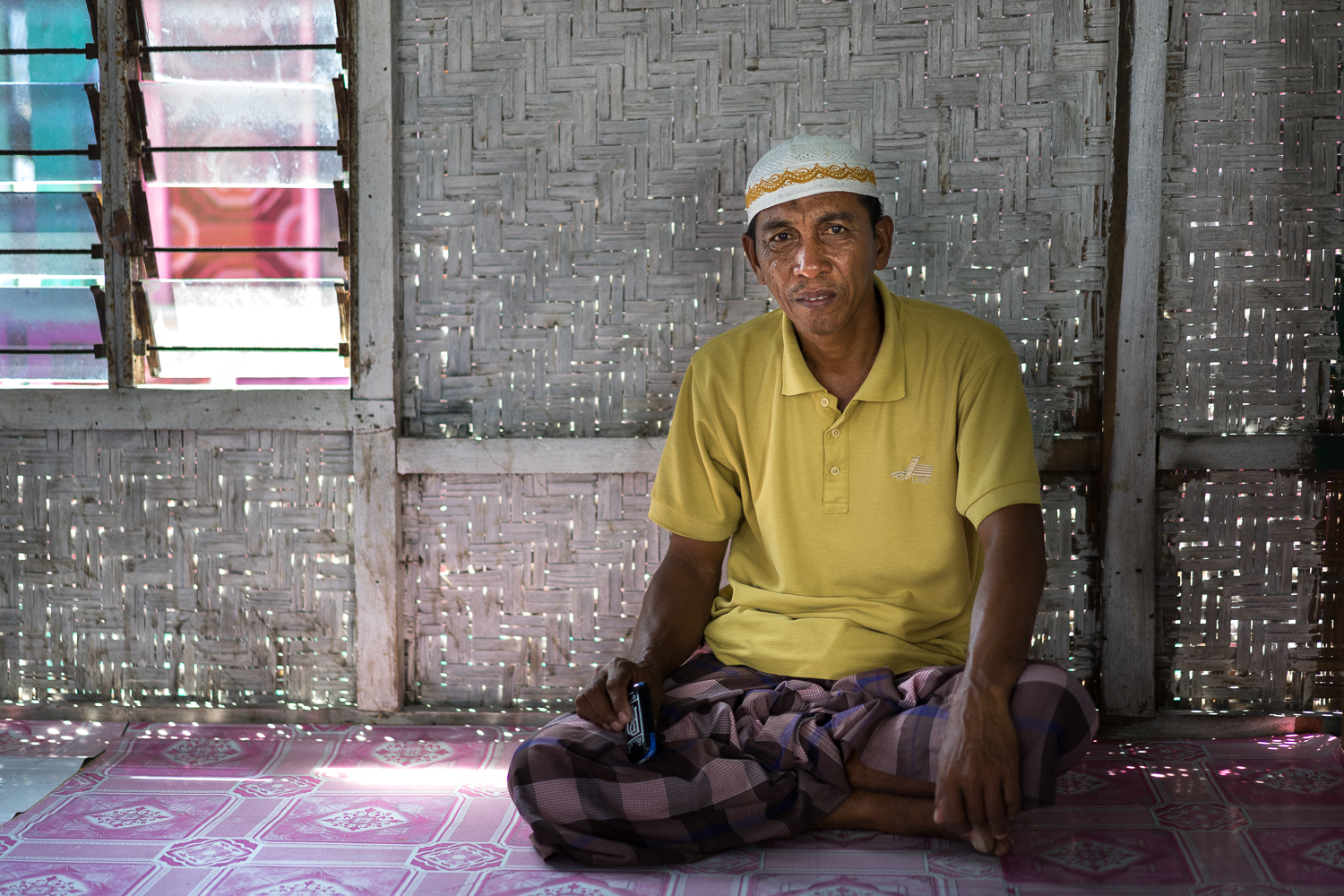 Mr. Rahim and his family offered us some juice drinks before we left. We thanked him and left him and his family a small amount of money as thanks for their time and hospitality. I quickly snapped a few photos and some video before jumping back on to our liveaboard.

GETTING TO PADAR ISLAND 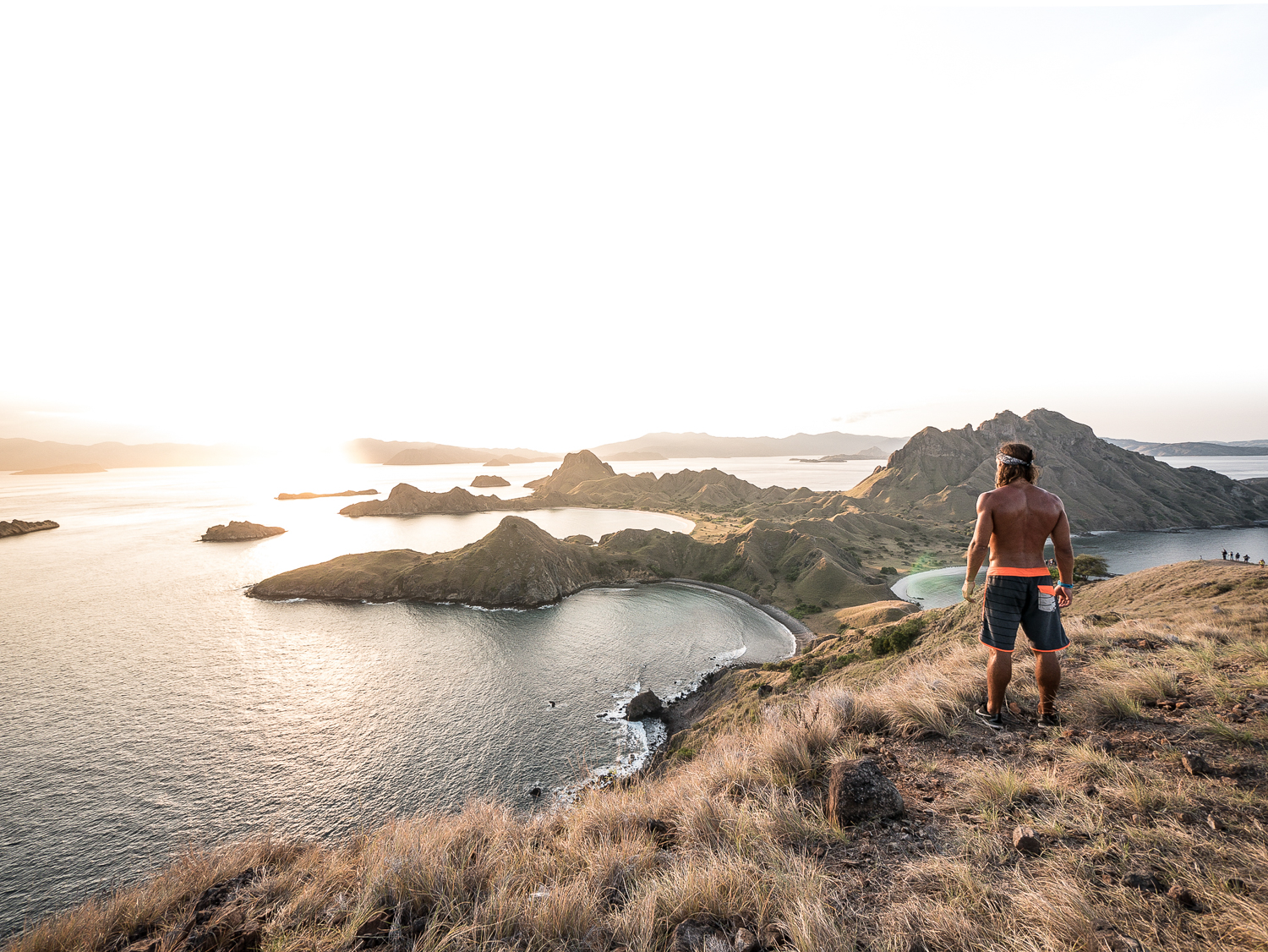 We laid back and enjoyed a 3 hour cruise through amazing scenery to get to Padar Island before dark so we could hike. So far our island travel experience could not have had us feeling any more relaxed. An hour before the sun set we jumped onto smaller boats and got dropped off at Padar Island. The hike was only 20 mins up but the view was unreal! We could so so many beaches and so many islands. I was totally blown away and sat atop the mountain enjoying the sunset with some of my friends.

Hiking down in the dark was a little less scenic and slightly more slippery. Without a head lamp it wasn’t something I would recommend but no injuries were reported and we all made it back to the boat in the dark. We had dinner, showers and headed up to the top deck to lay on our bean bags letting our imaginations wander as we made out the Milky Way. Conversations flowed and slowly one by one people made their way down to the cabins leaving only the bean bag sleepers to doze off as the boat headed back to Flores in the night.

LABUAN BAJO DIVING… FROM THE MAST

I woke up to see the sun creep over the horizon, creating lightly hued purple and orange tones around the harbor in which we had parked. I dozed back off to sleep only to wake up sweating from the strong sun an hour later. We were heading to the airport in a couple of hours and I still hadn’t jumped off of the boat. With a sense of urgency and a total dismissal of breakfast I found Jack the captain and got the all clear.

I climbed up the rickety wooden ladder and hauled myself onto the platform. I am not sure of the height but it could be anywhere from 30-50ft . I am not a great judge of heights. My sailing companion Alitt brought out the drone and now the pressure was on. I leapt off, free as a bird, crashing into the deep blue water below. What a feeling! I had to do it another 3 times and then try a few flips from the bow of the boat. 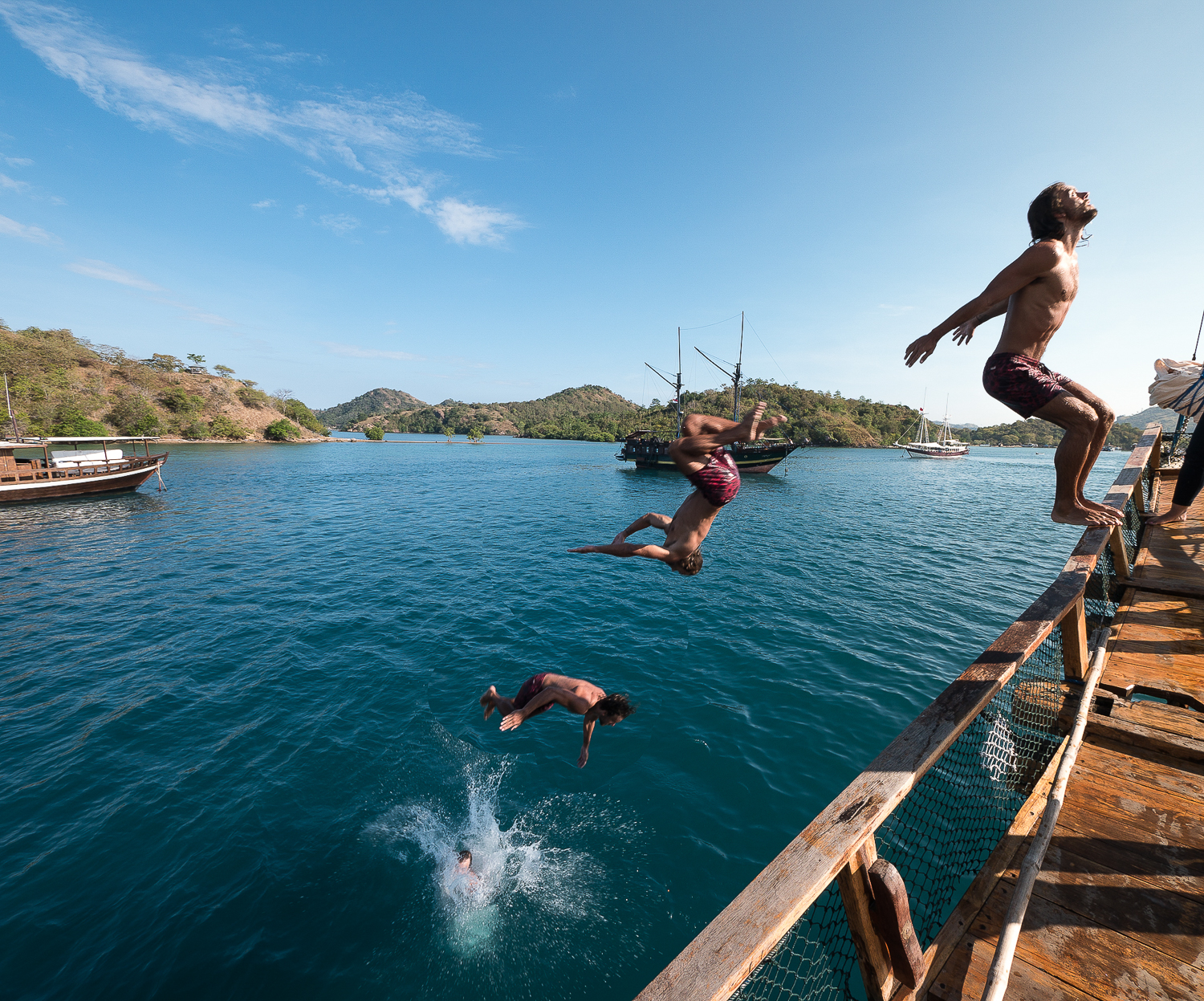 After a few quick pancakes I shoved everything into my bag and climbed off the boat. I would have loved to live for one whole week or more on a liveaboard like this and recommend this so highly to anyone who loves snorkeling, beaches, boats, jumping off things and a little hiking. So pretty much every adventurous person ever!

The island travel and activities listed below are in the same region as our Labuan Bajo liveaboard traveled but we visited them a day or two earlier on a smaller boat. I will detail them here, in case you want to visit them during your time on the liveaboard.

Tiny pieces of red coral break down and wash up onto this beautiful stretch of beach, giving the sand the appearance of a pinkish color. As with most beaches in the region the snorkeling was outstanding and the water was warm. What more do you need! On both sides of the bay/beach you can hike up the hill in five minutes and access a great view of Pink Beach itself or of the stunning beaches around the corner. 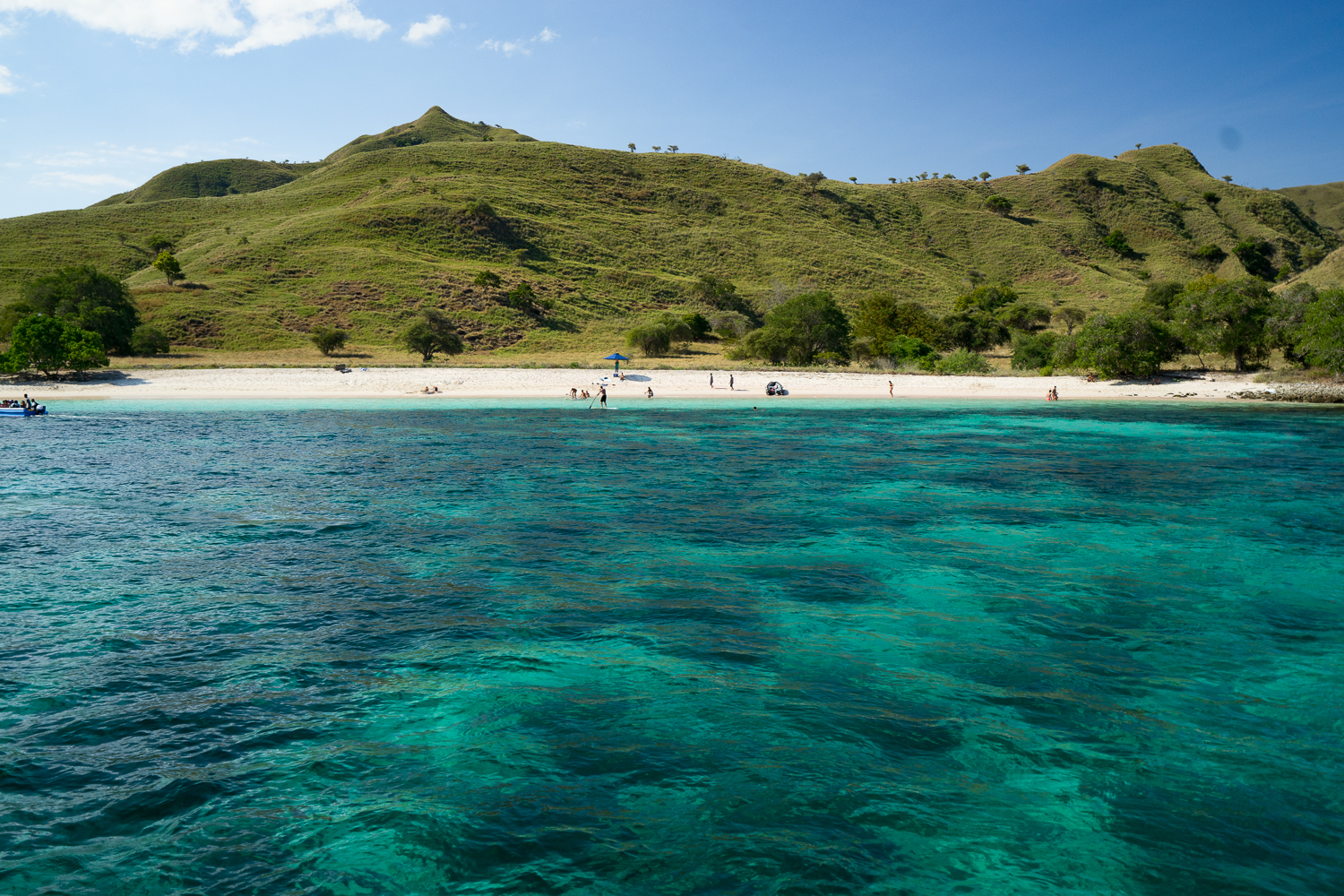 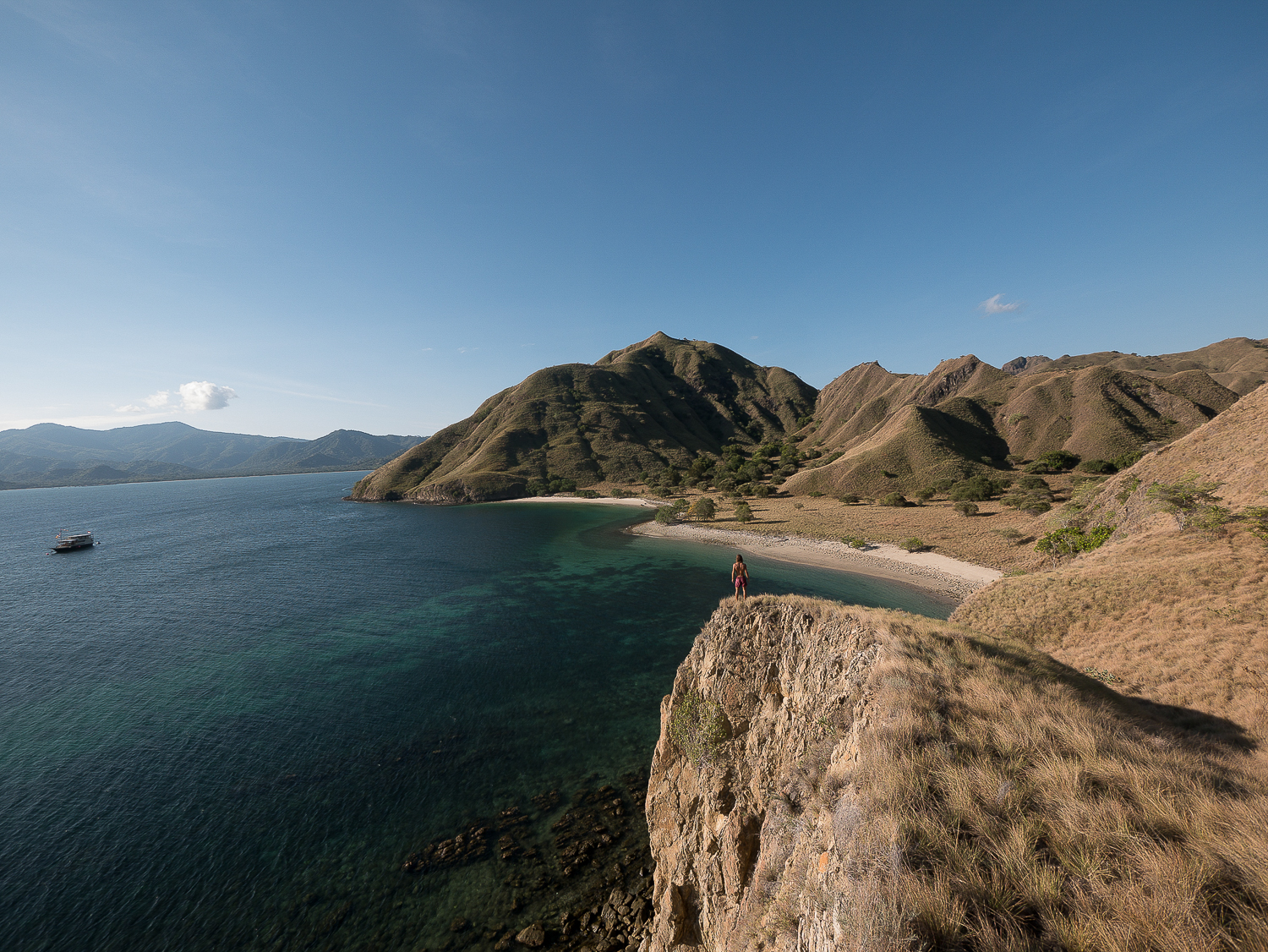 Getting to Komodo Island takes a few hours from Labuan Bajo but is well worth the trip. Nowhere else in the world except for Komodo National Park can you witness 3 meter long Komodo Dragons roaming pristine beaches. Seeing these lizards in person was amazing, especially when our guide informed us that they have killed three people in the past. This was a long time ago and the lizards seemed quite content basking in the sun despite the crowd of excited onlookers. The Komodo Dragon can swim but only chooses to do so when there is a necessary reason such as a scarcity of food. They are cold-blooded creatures meaning they don’t enjoy the cold water.

This was one of the most bizarre moments of the trip to Indonesia. We parked next to an island totally covered in trees. No-one told us too much except a few rumors milling around about bats. As the sun set, which was beautiful, a few screeches were heard and I was getting ready to head down off the roof of the boat for the cruise back to Labuan Bajo. All of a sudden a bat flies out from the mangroves on the island. That’s cool, we can go now. But all of a sudden, another bat appeared, followed by another bat and before we knew it thousands of screeching bats had risen from the mangroves and were mass-migrating to Flores to scavenge for food. I felt like I was part of a national geographic moment, which in fairness this scene would be worth watching on television. However, it happens on a daily basis. If you are in the area this is a great way to spend the sunset. 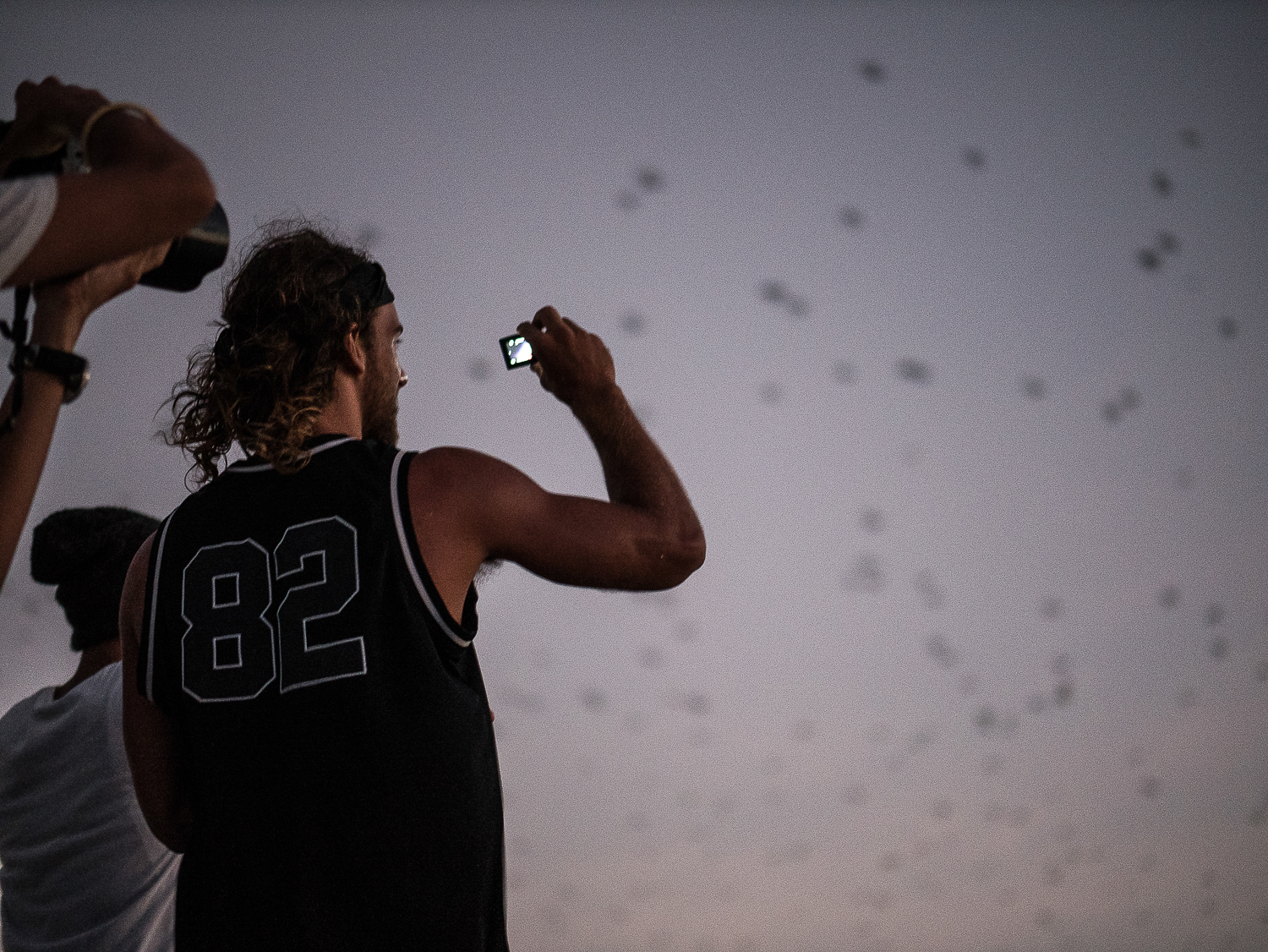 Want to view my portrait gallery from my trip to Indonesia? Click Here or on the image below.